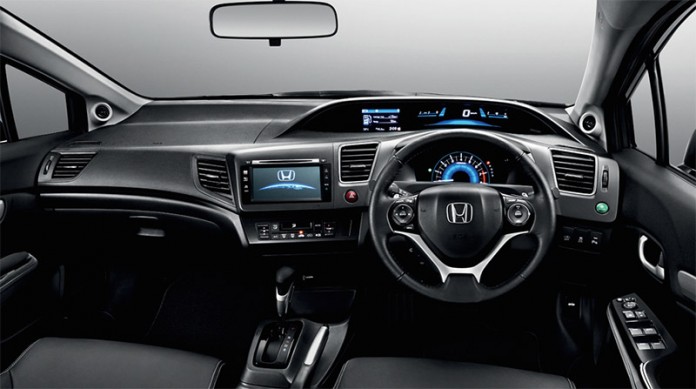 With rivals upping their ante in the C-segment, Honda has aptly updated the Civic to remain in the game.

From the day the first generation Honda Civic made its debut in 1972, until the unveiling of the eighth generation model in 2006, the model was getting better as it evolved. In fact, the Civic FD2 was not only (arguably) the best looking Civic of all time, but also among the best looking cars of its time. Even today, it is one of the best-selling cars in the used car market.

And then came the ninth-generation Civic, which didn’t trigger any emotion or desire towards it when we first saw it. It was all squared and angled off, and it didn’t look half as good as its predecessor. Not that it was an ugly car, but it was just not as appealing as the FD. However, over time, it did grow into us.

From a crowd-favourite, the Civic was becoming one of the lesser-preferred models in the Honda stable. Adding salt to the wound was the fact that every other new Honda model launched progressed their way up the ranks and conquered their respective segments, making Honda the best-selling non-national car brand in Malaysia.

Realising that the Civic needed some boost, the brand unveiled the mildly updated version in November 2014, with added features and a cheaper price tag. Priced at RM125,800, the facelifted Civic 2.0 is now about RM6,000 cheaper than before.

This was vital to ensure that the Civic remained in the game, where newer models like the Mazda 3 Skyactiv, the Ford Focus, and the Kia Cerato have begun making waves.

Mechanically, things remain the same. So, power is still being supplied by the 2.0-litre SOHC i-VTEC engine which produces 154hp and 190Nm of peak torque. Paired with the engine is a five-speed torque converter automatic gearbox with paddle shifters.

As much as the driving impressions are concerned, the car feels similar to what it was. Power delivery was seamless in town, as well as on highways. Despite looking more ‘mature’ and conservative, the Civic was actually fun around twisty roads. There was no Type-R-like handling, but it held itself well much better than the eighth-generation Civic.

Thanks to gizmos like the Motion Adaptive EPS, which combines the Vehicle Stability Assist (VSA) system and the electronic power steering, the car was composed at all times, and turned out to be an enjoyable drive throughout our stint with it.

The only difference between this car and the pre-facelift model is that the cabin looks more premium now. Gone are the flimsy rubbery door trim, replaced by smooth piano black accent. The instrument panel, and the air cond vents also get new, improved trim around them, giving the dashboard a more plush finish. The touch-screen display, which has grown from 6.1-inches to 7-inches added to the whole driving experience as well.

In all, the Civic has turned out to be a more worthwhile proposition now, thanks to the few added features. Despite being more generous, the car is about RM6,000 cheaper than before. Besides that, it costs less than its rivals like the Altis 2.0 variants as well. It is no class-leader, but it is worthwhile.