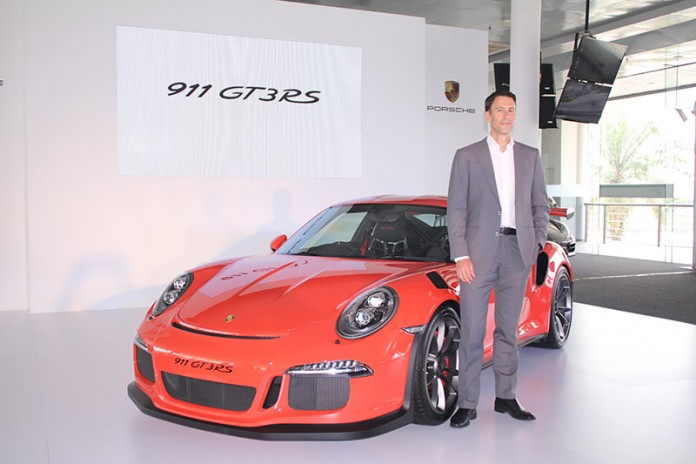 SIME Darby Auto Performance (SDAP), the authorised distributor of Porsche vehicles in Malaysia, launched the fifth-generation 911 GT3 RS at the Sepang International Circuit in conjunction with the ninth and tenth rounds of the Porsche Carrera Cup Asia 2015 last week.

Powering the 911 GT3 RS is a 4.0-litre six-cylinder engine – the largest displacement in the 911 model range. The mill kicks out 500hp of power and 460Nm of torque, channeled to the road by a specially developed PDK dual clutch transmission.

Performance stats read: zero to 100 km/h in 3.3 seconds and to 200 km/h in 10.9 seconds. Its combined NEDC fuel consumption is 12.7 l/100 km. It also comes with a number of track-optimized functions as well, such as the ability to disengage the clutch on the move and speed limiting by the Pit Speed button.

According to Porsche, the 911 GT3 RS’ Nurburgring North Loop time of seven minutes and 20 seconds is a full nine seconds faster than the firms own Carrera GT super car.

Notable features include a magnesium roof, extensive use of carbon fibre, a chassis that is tuned for precision, the rear-axle steering system, Porsche Torque Vectoring Plus with fully variable rear axle differential lock increase agility and dynamics, and a wider front and rear track widths which enable even better roll stability than in the 911 GT3. In addition, the 911 GT3 RS comes with the widest tyres of any 911 model as standard.

Inside, the car comes with full bucket seats which are based on the carbon bucket seats of the 918 Spyder. Other standard features are the Club Sport Package with a bolted-on roll cage behind the front seats, preparation for a battery master switch, and separately provided six-point safety harness for the driver and fire extinguisher with mounting bracket.