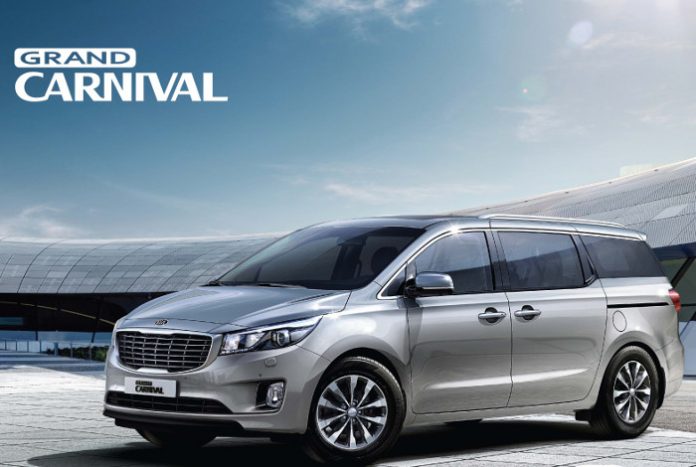 We’ve known for sometime about the impending launch of the all new Grand Carnival, and now Naza Kia Malaysia Sdn Bhd, has confirmed that it will be sometime soon as it has just opened bookings for its people carrier.

A refresh of the original Grand Carnival is a welcomed addition to the rather stagnant MPV market, and by the looks of things, it could spice things up quite a bit. The new vehicle, looks very different from the one it replaces as Kia sought to fuse decent looks with family carrying capabilities. Kia says that its engineers spent extensive time designing the interior to offer decent legroom and ample luggage space even when fully loaded with eight occupants.

Other than the extensive redesign both inside and out, some of the more notable features of the Grand Carnical are the leather seats, power sliding door and tailgate, 3rd row passenger easy access system, push start button and HID head lamps with Daytime Running Lights. Kia didn’t skimp on safety either as the vehicle comes equipped with 6 airbags, electronic stability control and hill-start assist system. It also boasts receiving a 5-star rating based on the crash tests conducted by the ANCAP (Australiasian New Car Assessment Program) and NHTSA (National Highway Traffice Safety Administration).

Speaking of the new Grand Carnival, Dato’ Samson Anand George, Group Chief Operating Officer, Automotive Group, Naza Corporation Holdings Sdn Bhd., said, “Despite 2016 being a challenging year for Kia in Malaysia, we managed to contain a better percentage than the national total industry volume’s negative growth. For 2017, we have foretasted our sales volume to increase by 25% and the All New Grand Carnival will play a pivotal role in achieving this target.”

Under the hood of the Grand Carnival is a 2.2-litre CDRi turbodiesel engine with a variable geometry turbo. It produces 190bhp and 440Nm of torque, which should prove useful when lugging the family around and especially when its to Genting.

Potential buyers can make their bookings at any Kia dealership in Malaysia including those in Sabah and Sarawak. So, if you are interest a Peter Schreyer people mover, head on over to your nearest Kia dealership.