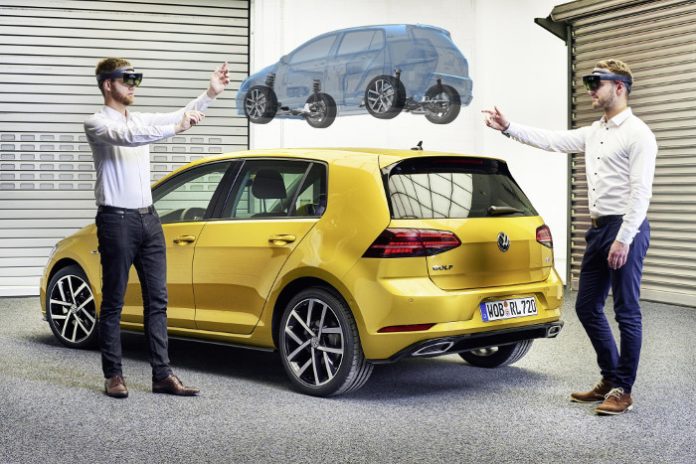 Volkswagen has embraced the future and is looking at augmented reality to pursue the designs of its future models.The company is currently testing this methodology with the use of the Microsoft “HoloLens” augmented reality googles. Unlike Virtual reality ones, HoloLens blends virtual reality with the real world enabling better understanding of shapes and figures in real time. The technology is said to be beneficial to a number of fields and automakers like VW believe, that it will help them shorten the timeframe of their design work.

Hooked up to a mobile computer, Microsoft’s HoloLens can project virtual content onto a physical object through gesture control and voice commands. Ostermann, who heads one of VW’s Engineering Labs uses this technology to help create, mix and match colour schemes and remove any part of a vehicle in real time. he only needs to point his finger and HoloLens makes the changes. Demonstrating this tech with a R-Line Golf, Ostermann was able to change different aspects of the vehicle such as, use different wheels and modify the fenders, turning the vehicle into a very different variant of the original one.

Ostermann’s lab is one of six being operated by Volkswagen Group IT in Wolsburg, Berlin, Munich and San Fransciso. The latest has recently begun operating in Barcelona and together with the other locations, teams will collaborate on the digital future with research institutions and technology partners.

“At Volkswagen, we have been using augmented reality and virtual reality for some time, mainly to obtain a three-dimensional view,” says Ostermann. “We are now taking a major step forward at the Virtual Engineering Lab. We are transforming this technology into a tool for Technical Development. This will allow Volkswagen engineers to work on a virtual vehicle, to change its equipment as they wish and even to design new components virtually. They will be able to see the results of their work immediately.”

HoloLens doesn’t just project objects onto real ones, it also enables teams from different parts of the world to collaborate on the same project, making for a more efficient working environment as changes can be made in instant and be viewed by all members of the team.

The tech is said to still be in the testing phase but in the future, VW hope to be able to call up the entire brand portfolio and make changes no matter how extensive in order to build their best vehicles for the mass market.