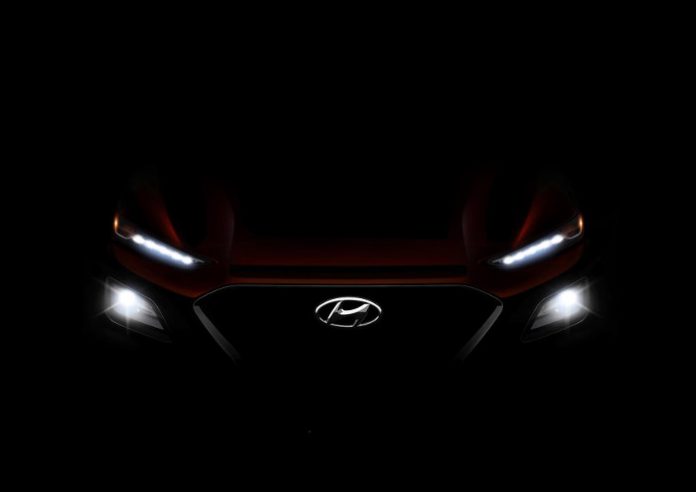 Hyundai has provided fans with a glimpse at its new SUV, the all-new Kona, ahead of its official debut in the coming months. At this point in time, the Korean automaker has only made the front fascia available for viewing, not the whole car.

Based on what we can see, the design language used to pen the new vehicle is similar to what Hyundai uses today. The signature hexagonal Cascading grille is present and accounted for, but what’s interesting is that the DRLs (Day Time Running Lights) are placed above the LED headlights rather than under them in most conventional designs.

The sharp contours at the front especially those encasing the headlights and front grille provide the the Kona with a menacing look, which should make the new SUV an attractive alternative to vehicles offered by the juggernauts of the motoring industy.

The vehicle will have decent SUV sized ground clearance and will have an optional four-wheel drive system that will enhance ride and handling behaviour. Hyundai hasn’t released any specific details regarding powertrain, driver aids or even the interior layout, and as such, one can only speculate what will be offered in the coming months.

The Kona will be the fourth SUV that Hyundai makes with the first being the Santa Fe. Since 2001, Hyundai has sold 1.4 million SUVs to date and with the new addition, the automaker hopes to take it to the next level in Europe and other parts of the world.

Hyundai Motor Europe has ambitious plans of becoming the leading Asian automotive brand in Europe by 2021 bolstered by the launch of 30 new models and variants in the next few years. The Kona will make its official debut towards the middle of this year but we expect the company to divulge a lot more in the coming months leading up to the official reveal.