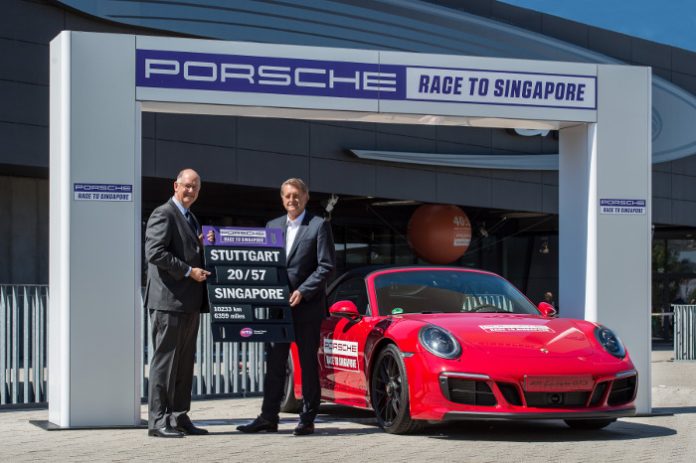 Porsche has teamed up with the Women’s Tennis Association (WTA) by committing to a multi-year partnership. This agreement will see the German automaker become the official and exclusive automotive partner of the WTA and the new title partner of the Porsche Race to Singapore”.

The Porsche Race to Singapore which is a leaderboard, used to be known as the Race to Singapore, and will, for the whole season, display the names of eight of the most successful singles and doubles players competing in the 57 tournaments that make up the WTA. The best results of each player from each tournament will play a part in determining if they qualify for the WTA finals in Singapore. Each tournament represents one lap on the leaderboard and the respective tournament is given its own ‘pit lane board’ displaying the lap number or in this case the number of the tournament with respect to the total for the season.

The player that heads this leaderboard with the most points at the end of the ’57th lap’ race will win a place in Singapore for the finals and will also be awarded a new Porsche 911 Carrera GTS Cabriolet.

“The title sponsorship of the Porsche Race to Singapore contributes to the internationalization of our engagement in women’s tennis. It intensifies our successful partnership with the WTA and enriches it with a new attractive element,” said Detlev von Platen, member of the Executive Board responsible for Sales and Marketing at Porsche AG. “Alongside our national activities and the Porsche Tennis Grand Prix’s worldwide presence, this new element provides value and visibility throughout the entire year in women´s tennis.”

Currently, the Porsche Race to Singapore is being led by Czech Karolina Pliskova, with victories in Brisbane and Doha. Caroline Wozniacki occupies second place after finishing runner-up in Doha, Dubai and Miami. Johanna Konta, the Miami winner, is third.

We will need to watch the entire season to see who finally drives home the shiny new Porsche 911, but expect some tough battles as players vie to be crowned champion at the end of the season.