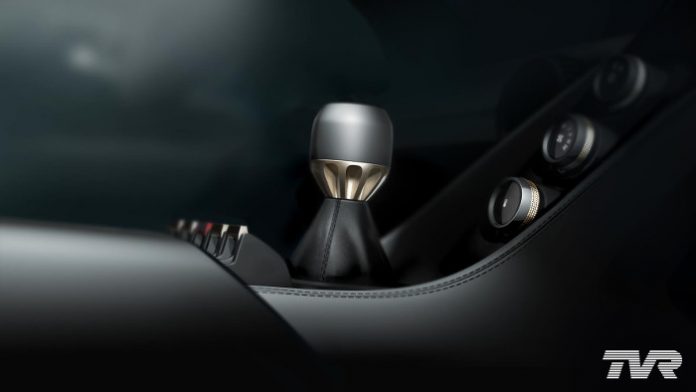 TVR has released a teaser picture before the official launch of its first ever production vehicle since going under. According to the automaker, its entire team have worked tirelessly to ensure that the new vehicle is engineered to offer class leading strength, reliability and functionality, but still maintain lightweight and high performance attributes.

Based on the available image, we can see that extensive time and attention have gone into designing the intricate details of the interior. The gear knob, seems to have been machined out of a block aluminium or alloy, the switchgear arrangement seems very aircraft-like but the gauges and thier arrangement on the centre console is reminiscent of 1960s race cars.

What this could be then, is a TVR that has the best elements from the past and present mashed into a slender body that should be on par with the rest of the performance heavy hitters. The premise of this notion is the fact that the automaker has been working closely with Gordon Murray Design to complete the new car.

In case you didn’t know, Gordon Murray was the guy behind the legendary McLaren F1 supercar. It was his brainchild and proved to be the most powerful car of its era. In fact, It held the record for being the fastest production car in the world until recently. Murray has now opened his own design house in the hopes of creating another game changer.

Speaking of the new TVR, Murray, said, “We developed the new TVR as a product that builds on all the magic and excitement of our hand-crafted British motor cars of yesteryear. We combined this with the most rigorous engineering and assembly process design to ensure outstanding consistency, build quality and reliability.”

The car will be revealed in September at the Goodwood Revival Earls Court Motor Show and will only be sold in limited numbers. This year also marks TVR’s 70th birthday and its entry into the high performance vehicle market.

Regarding this, Les Edgar, chairman of TVR, said, “On the 70th birthday of our marque, we are entering a new era with a precisely engineered car that delivers exhilarating performance on road and track, as well as everything discerning customers expect of a car intended for everyday use.”

TVR has’t divulged much regarding the car or what it will be called. They will probably continue to keep mum till the actual release date, as a way to build more hype. Based on what we have gathered though, the new car should be an interesting addition to the current line-up of sports cars and should serve as an alternative to what we are used to seeing from the German and Italians.