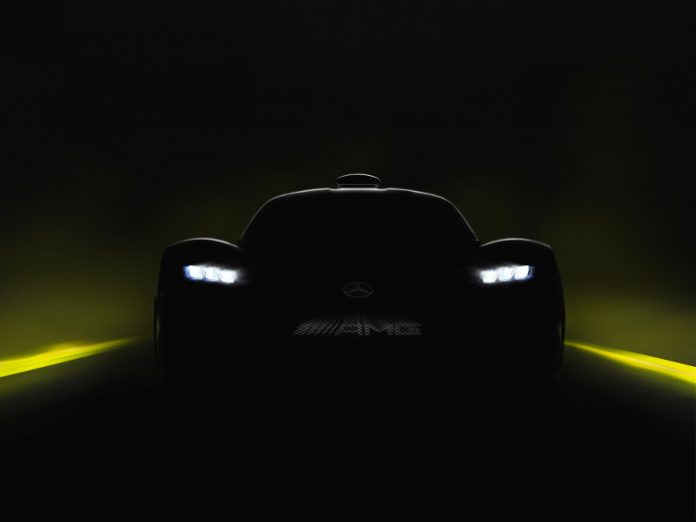 Formula 1 is considered the pinnacle of competitive Motorsports and is the platform that established manufacturers use to display their engineering prowess. This isn’t its only purpose though, because technology that’s developed for F1 cars, especially those that help improve stability and driver management, eventually make their way into mainstream vehicles.

Such is the case with Mercedes-AMG. The company’s F1 team, which has proven to be an unstoppable force these past few seasons, has enjoyed a string of victories because they’ve developed a car that is blindingly fast, agile around corners and pretty reliable too.

Now, the company has decided to bring the same technology and magic of this F1 car, into a road going car. Called the Mercedes-AMG Project ONE, it’s a two-seater supersports showcar that will showcase the brands capabilities.

Slated for reveal at the International Motor Show (IAA) in Frankfurt, the car is said to encapsulate the very latest and efficient, fully-fledged Formula 1 hybrid technology for the road. It’s a high performance supercar that will be powered by a hybrid powertrain that is able to output more than 1000bhp.

According to the automaker, the car is expected to have a top speed exceeding 350km/h and will offer the best of both worlds. Meaning, it will combine exceptional racetrack performance with sensible day-to-day practicality.

Little else is known at the moment, and the only proof we have of the car’s existence is a rather vague image of it’s front end. Based on what we have gathered, it draws quite a bit of design inspiration from the brand’s past race cars, which is a good thing. Stay tuned and will let you know more about the car as soon as we find out.