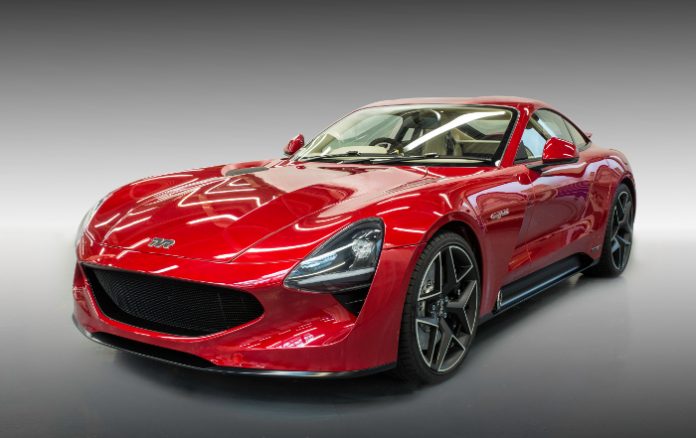 TVR has finally launched the Griffith, its first ever vehicle in more than a decade, at the Goodwood Revival. Staying true to its heritage, the new car’s design seems to be inspired by a number of its predecessors, which is made evident by the long and sleek silhouette, angular contours and ostentatious front fascia.

It largely stays true to the TVR formula safe for the large gaping hole at the front and faux side vents integrated with the headlights. There seems to be a hint of McLaren 570s in the entire look, which isn’t a bad thing but dilutes the TVR representation of the car.

The rather elegant design was a culmination of work by Gordon Murray’s Design house and incredible manufacturing efforts of iStream who were responsible for the car’s carbon composite structure and body panels.

In fact, the car is so highly engineered, that it happens to be the second front-engine production car to feature a flat floor, which equates to better cabin space. Buyers can also opt for a full ground-effect aerodynamic package, that will improve stabilty and handling at higher speeds. 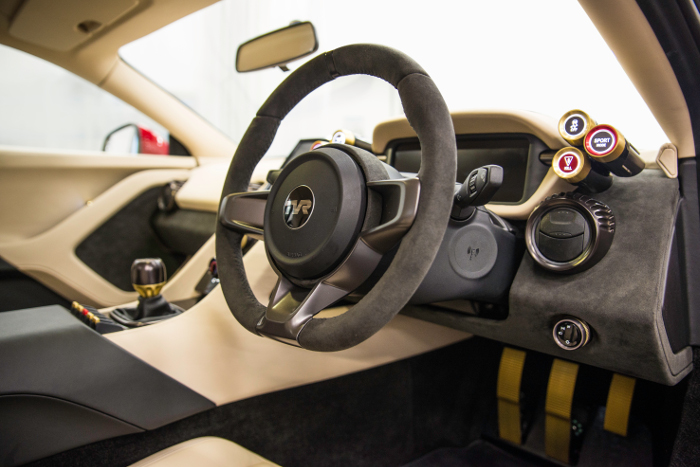 Inside, the car is more driver focused than most of its rivals, featuring minimalist switchgear that flank the LCD based instrument cluster. The short but chunky gear knob leads us to believe that the Griffith will be offered with a short-shifting manual transmission, a nod to the purist in all of us.

As such, the car is able to achieve a top speed of more than 322km/h, and accelerates from 0-100km/h in less than four seconds. This puts it in the same league as top guns from the likes of Porsche, BMW and Mercedes-Benz.

Though not ground breaking, these specs are nothing to scoff at because it could point to the idea of the Griffith being marketed as a more sensible and less expensive supercar. In the UK, the car is priced at £90,000 (RM 499,064) and production of the new TVR Griffith Launch Edition will begin in late 2018.

Speaking of the new car, TVR Chairman, Les Edgar said, “Today’s unveiling is the culmination of nearly three years of tireless work by the team, and we’re all proud to be able to show the new TVR Griffith to the world.”

He then added, ” This is unmistakably a TVR, a British muscle car that’s as awesome and brutal as it is charismatic and refined. Importantly, the new TVR offers levels of technical sophistication, comfort, reliability and practicality never seen by the brand before.”

The new Griffith is being previewed in a pace car livery, which the automaker says signals its seriousness of returning to racetracks of the world in the very near future.