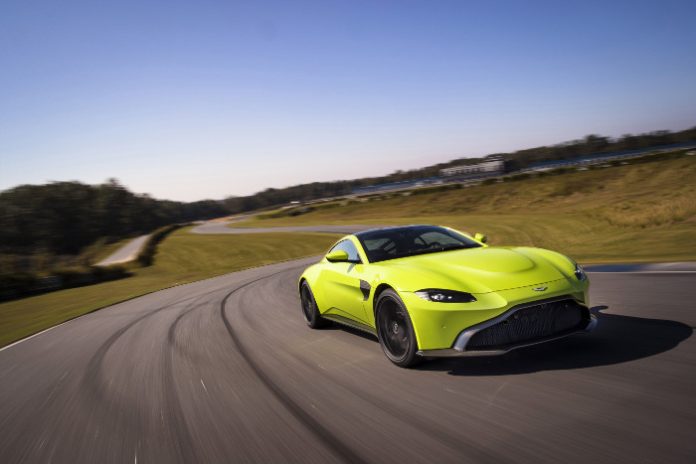 Aston Martin has finally revealed the newest member of its family, the latest Vantage. This sleek two seater picks up where its predecessor left off, offering a sleek silhouette and a healthy helping of power. Its design however, is a major departure from the automaker’s current design language. At 4465mm, the Vantage is 284mm shorter than the DB11, and is 34mm shorter than a Porsche 911.

The signature front grille receives far more real estate than before, it’s placed lower and has been integrated with the lower lip assembly. Gone are the familiar headlights and in its place, narrower ones that blend with the lines of the front fascia. Most prominent of the lot has to be the large swooping bonnet that looks like it stretches for miles.

From the side however, the shape isn’t that dissimilar from its predecessor, but the lower roof line and angular contours do add to the design’s depth. As far as the rear is concerned, you would be forgiven for mistaking the new Vantage for a Porsche, at first glance. The rear haunches, wedged shaped upper section and elongated LED taillights bear more than a passing resemblance to the 911. 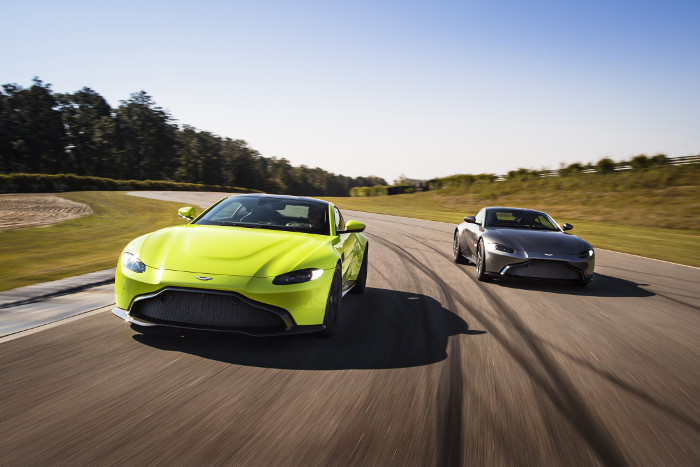 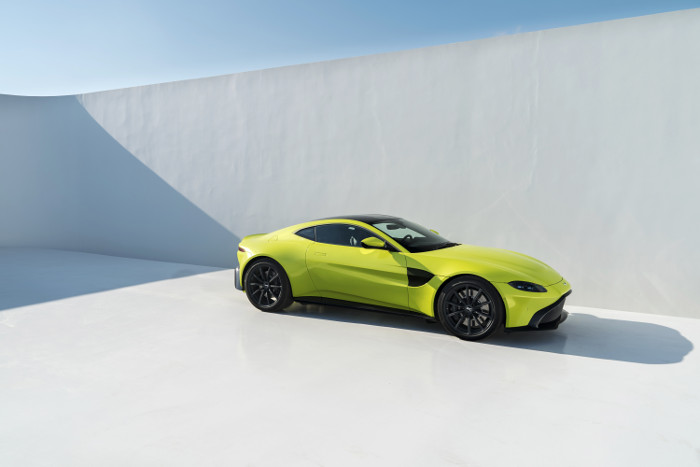 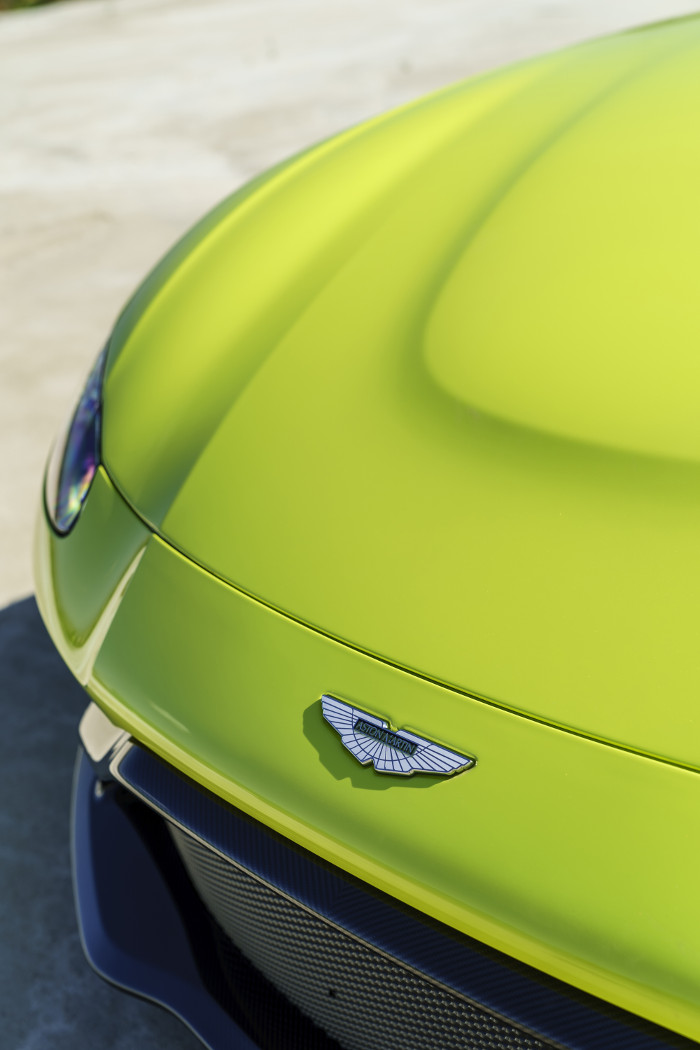 On the inside, there’s a whole new interior, which is a breath of fresh air considering Aston rarely likes change. The car’s switchgear consoles are huddled together under the twin chrome-outlined air vents.The 8-inch LCD screen is responsible for controlling the audio, phone mirroring and navigation. A nice addition is the body-colour matching lower centre console, it and the leather inner door handle housing add to the car’s exclusive feel.

Under the bonnet is a 4.0-litre V8 twin turbo engine that develops close to 510bhp and 685Nm of torque. It’s a Mercedes-AMG unit that has been reworked by Aston Martin engineers to ensure that it delivers the same character and feel of engines that preceded it. Both its induction and exhaust systems have been reworked to produce the same visceral feel of the normally aspirated V8 in its predecessor.

The Merc sourced powerplant is mated to a ZF 8-speed automatic transmission that is rear mounted to help with weight distribution. It has specially developed software that allows for shorter and crispier gear changes as well as the refinement and practicality, which is beyond that of dual clutch gearboxes. As such, the Vantage is able to sprint from 0-100km/h in about 3.5 seconds and reach a top speed of 314km/h. 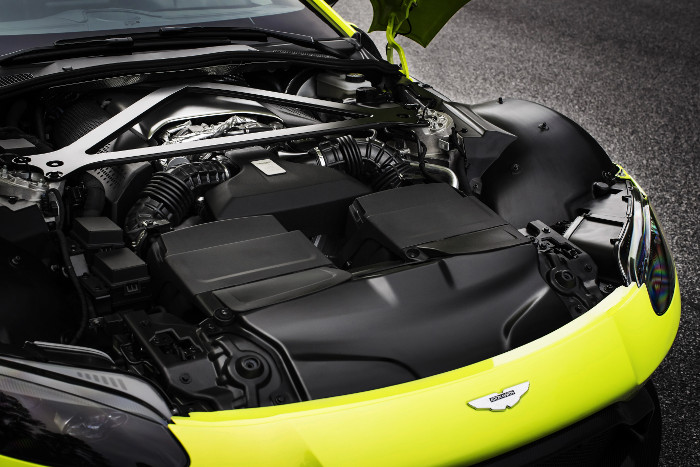 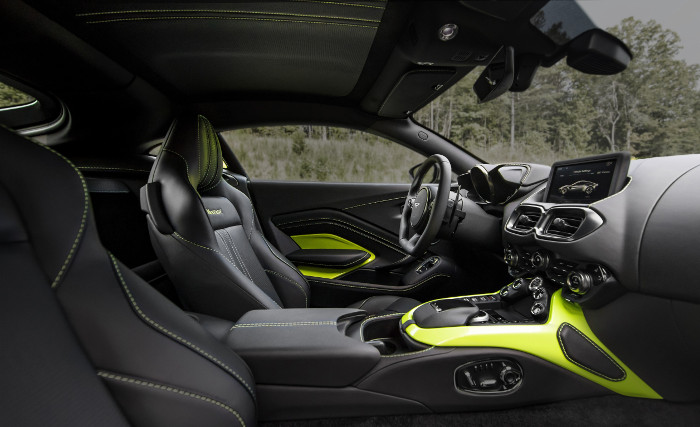 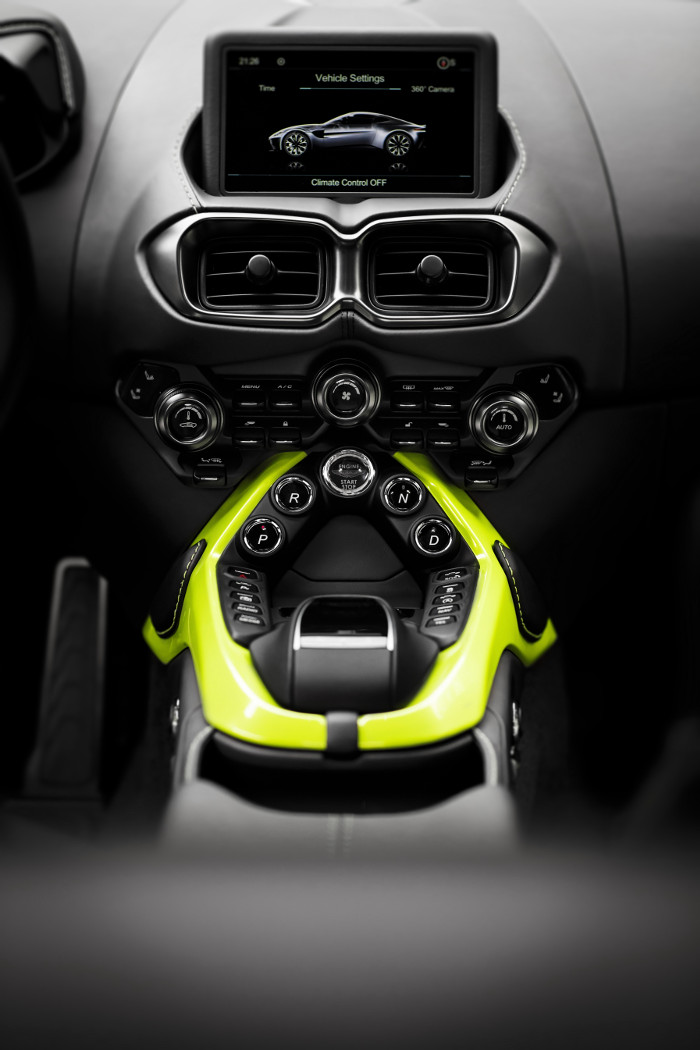 Aston Martin’s Chief Technical Officer, Max Szwaj, said, “As an automotive engineer the challenge is always the same: to achieve greater efficiency in every area of the car. With an unashamed sports car such as an all-new Aston Martin Vantage you have another challenge – the relentless pursuit of greater emotion and excitement. Not only have we massively improved the hardware of this new Vantage, we’ve invested it with true heart and soul.”

The suspension features a forged double wishbone arrangement at the front and a multi-link one at the rear. Thanks to adaptive damping, the car is able to understand and compensate for the driving conditions and driver needs through the use of several sensors. Four driver modes, Sport, Sport Plus and Track, alter the powertrain, transmission, suspension and steering systems to deliver the required output.

And for the first time on an Aston Martin, the Vantage is fitted with an electronic differential or E-Diff. Linked with the car’s electronic stability control, it is able to understand the car’s behaviour and shift power to the wheel that needs it most. Unlike conventional Limited Slip Differentials or LSDs, it can react in a matter of milliseconds. This improves the car’s cornering and handling capabilities.

Stopping power comes courtesy of ventilated two-piece 400mm cast-iron discs at the front, with ventilated 360mm discs at the rear, gripped by 6-piston front and 4-piston rear calipers. They offer decent stopping power for the 20-inch lightweight rims that are wrapped in Pirelli P Zero tyres. 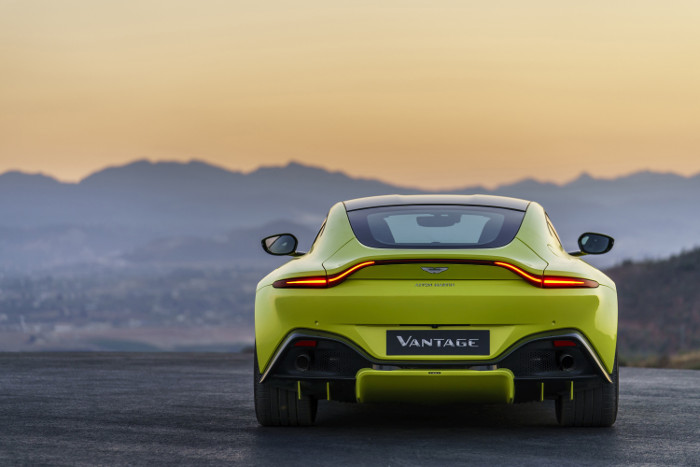 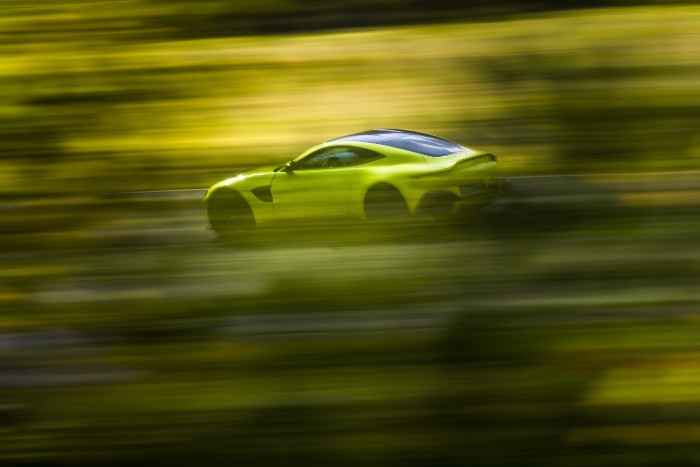 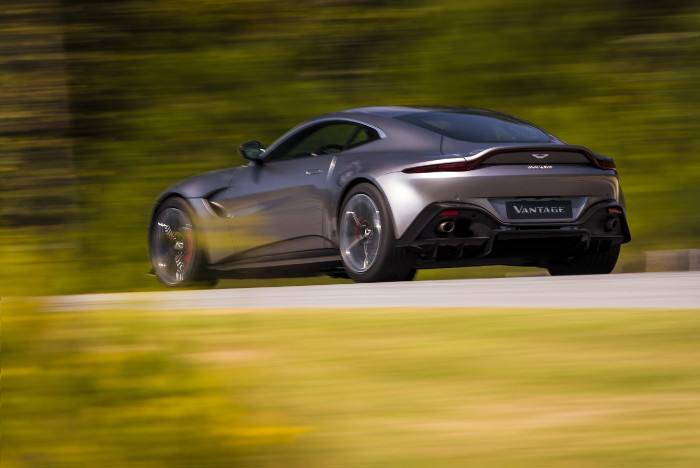 The new Vantage is on sale now in the UK, Germany and the USA. Deliveries are scheduled to begin during the second quarter of 2018. The car comes equipped with the latest tech and is bound to be a top seller.