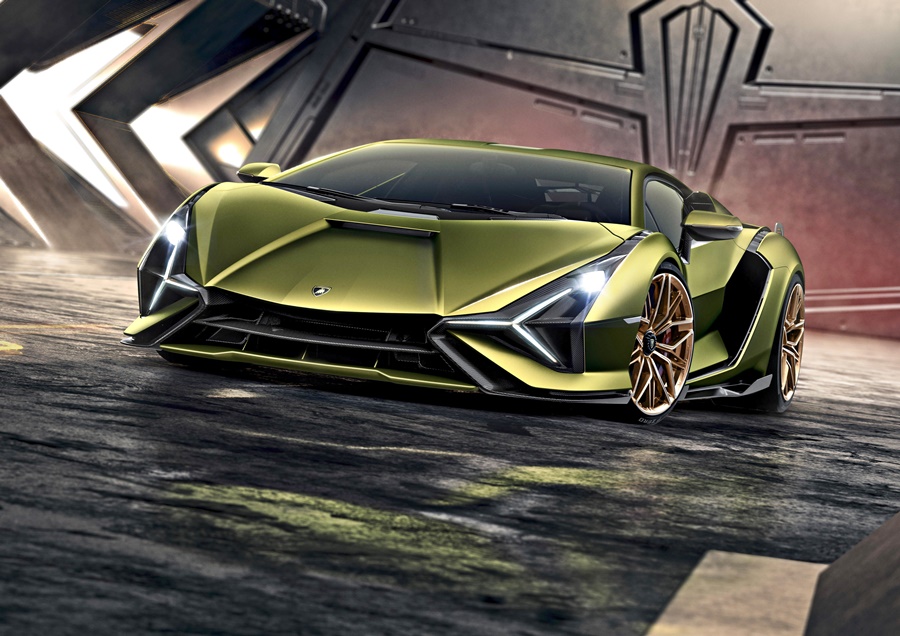 It was not so long ago that hybrid models being introduced were vehicles with modest performance. The carmakers introducing them stressed on environment-friendliness more than performance since they did help reduce exhaust emissions. However, development of hybrid technology, which went into mass production in the late 1990s, accelerated as the major carmakers wanted to achieve economies of scale as quickly as possible and push costs down.

Within 10 years, the new hybrid models were faster and went further too. The advancement was timely since advanced countries were beginning to introduce strict emission regulations that requires ‘electrification’ of powertrains to meet. Fully electric powertrains are still expensive but hybrid powertrains offer a transitional solution that was acceptable. 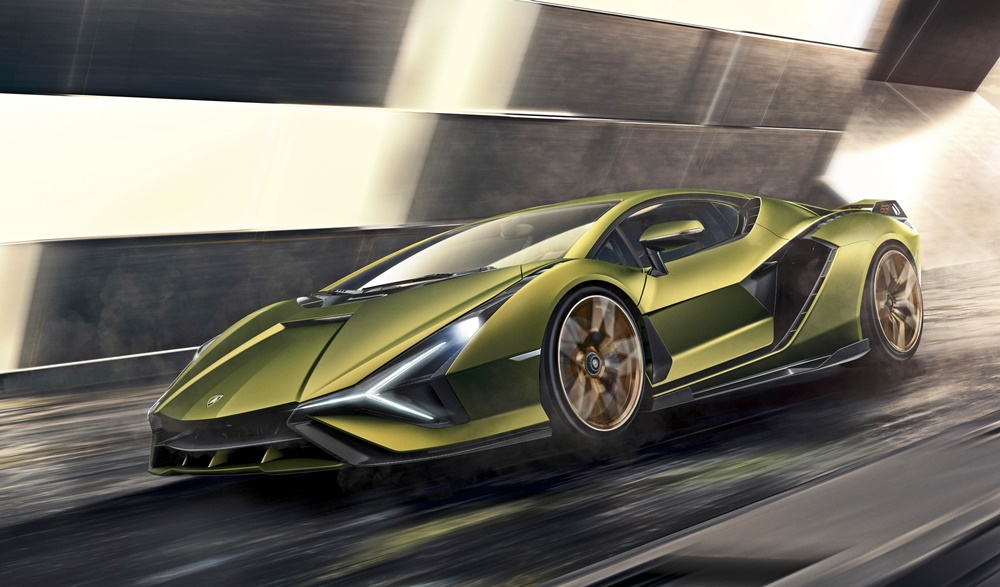 You would think that where the supercar manufacturers are concerned, hybrids would be of no interest but Lamborghini will soon show that it can produce a super sportscar – like the rest of its range – with a hybrid powertrain. To be unveiled at the Frankfurt Motorshow this month, it will be called the Sian – the name meaning ‘flash’ or ‘lightning’ in dialect of the Bolognese region in Italy. This is in reference to the first electric application in a Lamborghini production car.

Fastest Lamborghini of all time
The Sian will be the fastest Lamborghini of all time, thanks to a unique new hybrid system which focuses on providing the highest power possible via the lightest solution. It has a V12 engine – huge for a hybrid powertrain – and a 48-volt e-motor. The 6.5-litre V12, which incorporates titanium intake valves and is uprated to 785 bhp at 8,500 rpm (the highest output ever from a Lamborghini powerplant) combines with the 34 bhp from the electric motor. Total system output is 819 bhp with a weight-to-power ratio claimed to be better than that of the Aventador SVJ, achieved through extensive use of lightweight materials. 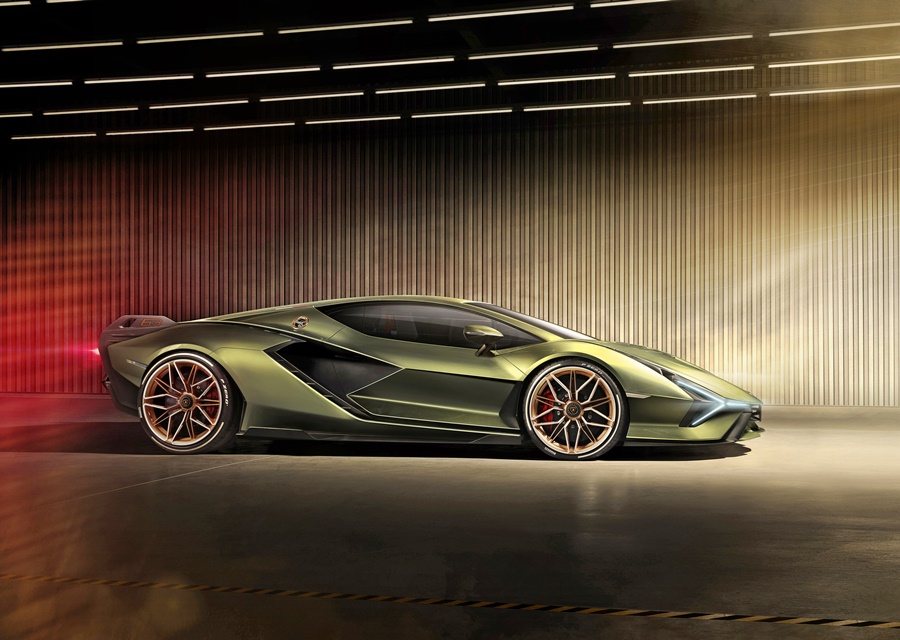 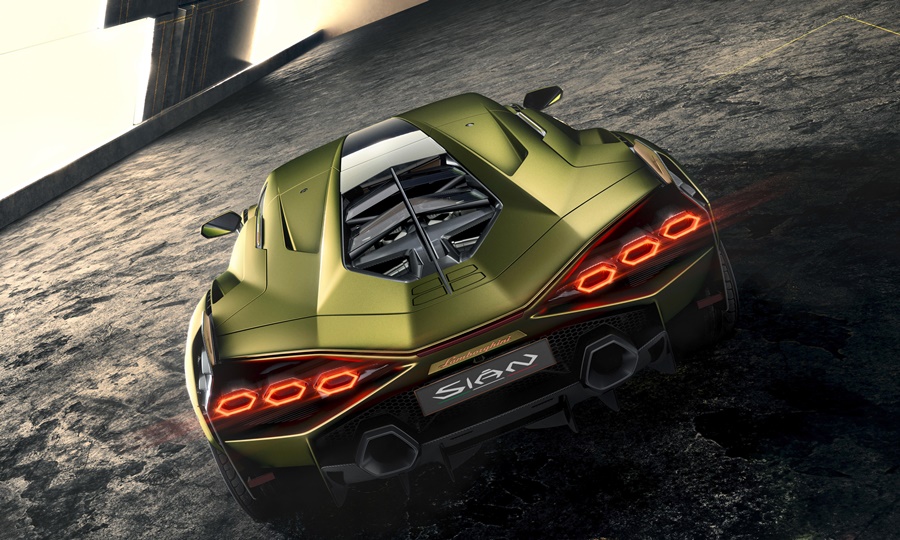 The Sian has a claimed a top speed of over 350 km/h so it will be able to keep up with any other Lamborghini model. More significantly, it lays claim to having the fastest acceleration of any production Lamborghini ever – 0 to 100 km/h in less than 2.8 seconds.

Advanced and world-first technologies
The energy accumulation technology is a world-first. Rather than a lithium-ion battery, there is an innovative supercapacitor application. This technology was pioneered originally in the Aventador but has been dramatically developed to store 10 times the power. It is 3 times more powerful than a battery of the same weight and yet 3 times lighter than a battery producing the same power.

The Sian incorporates a highly advanced regenerative braking system developed by Lamborghini. Thanks to the symmetric behaviour of the supercapacitor, which contrary to normal li-ion batteries can be charged and discharged with the same power, the energy storage system is fully charged every time the vehicle brakes. The energy stored is an instantly-available power boost, allowing the driver to draw immediately on increased torque when accelerating away, up to 130 km/h when the e-motor automatically disconnects, improving the elasticity manoeuvres and making it more than 10% faster than a car without this system. 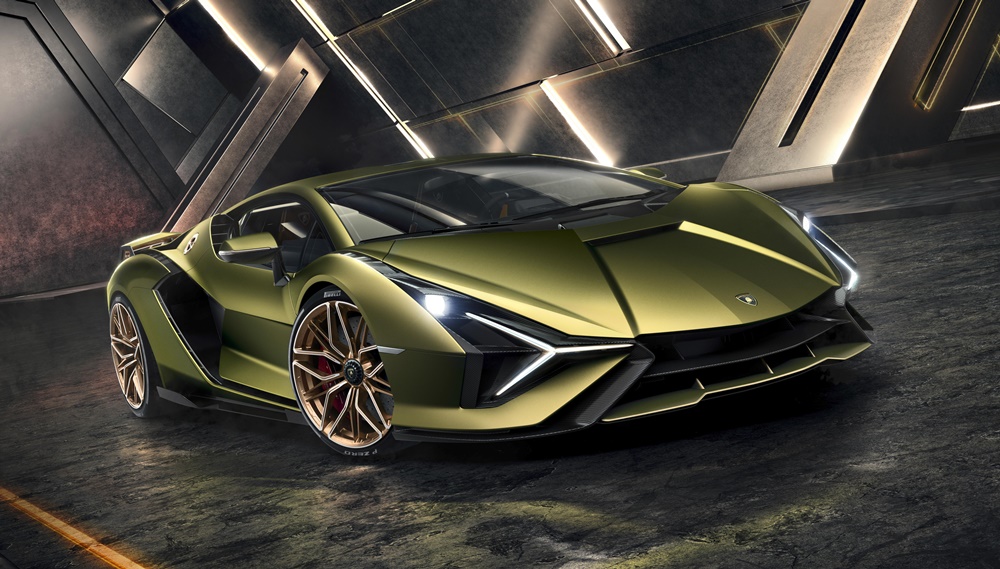 A design heading for the future
The Sian’s design is visionary and futuristic as would be expected of a car that takes Lamborghini into a new era. Taking futuristic inspiration from the Countach, the Gandini line is evident in its profile, while the silhouette introduces new features such as the characteristic aero wings, giving the Sian an unmistakable profile. The iconic Lamborghini ‘Y’ shape can be seen in the NACA air inlets on the doors, glass elements are included in the engine cover, and the diagonal line features in the front bonnet, as in the Countach.

In the roof, the ‘Periscopio’ tunnel that originally incorporated a rear mirror in the Countach adds a bold feature that links with the slats of the rear engine cover and important elements contributing to the car’s aerodynamic efficiency. 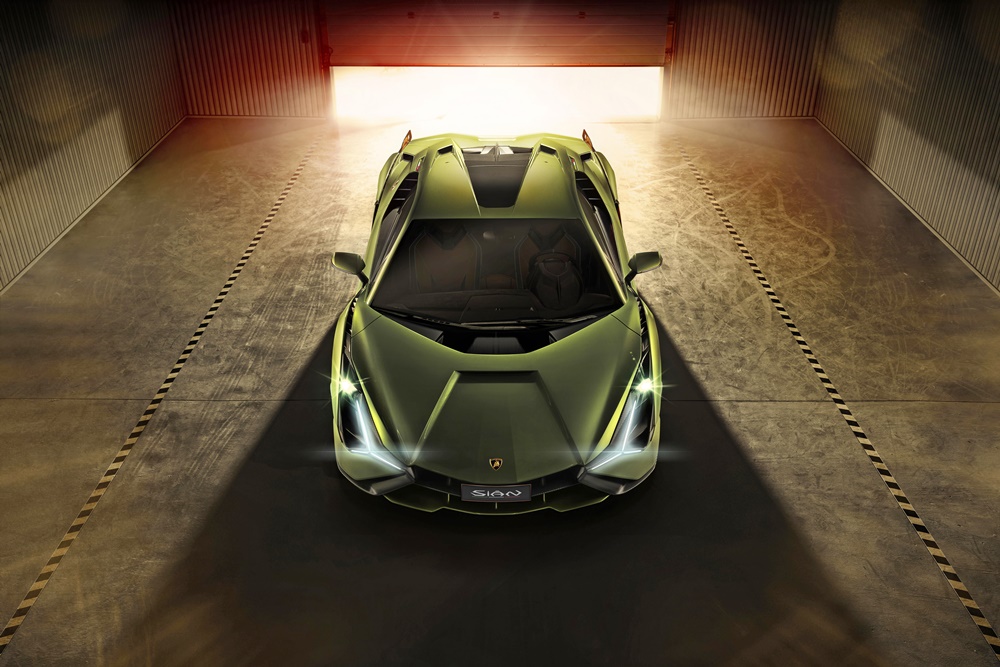 “The Sian is a masterpiece in possibilities,” said Stefano Domenicali, Automobili Lamborghini Chairman & CEO. “Not only does the Sian deliver a formidable hypercar design and engineering tour de force today, it augments the potential for Lamborghini as a super sportscar brand for tomorrow and for decades to come, even as hybridization becomes more desirable and inevitably essential. With the Sian, Automobili Lamborghini demonstrates its dynastic strength as a legendary super sportscar brand for the future.” 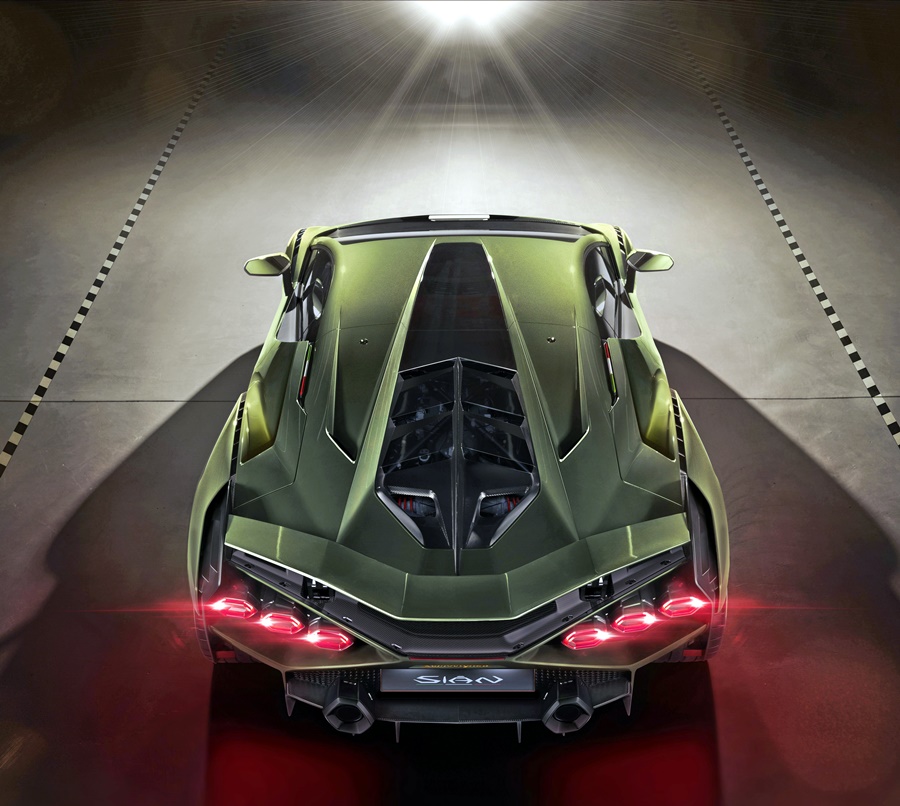 63 units at US$3.6 million each
Like the Aventador SVJ 63 Roadster which we wrote about earlier, Lamborghini will produce and sell only 63 units of the Sian. The number has been chosen to commemorate the founding year of the company – 1963. Each of the 63 customers who have already paid their deposits will spend upwards of US$3.6 million (about RM15.2 million), the final price depending on the degree of customisation.

Click here for other news and articles about Lamborghini on PISTON.MY