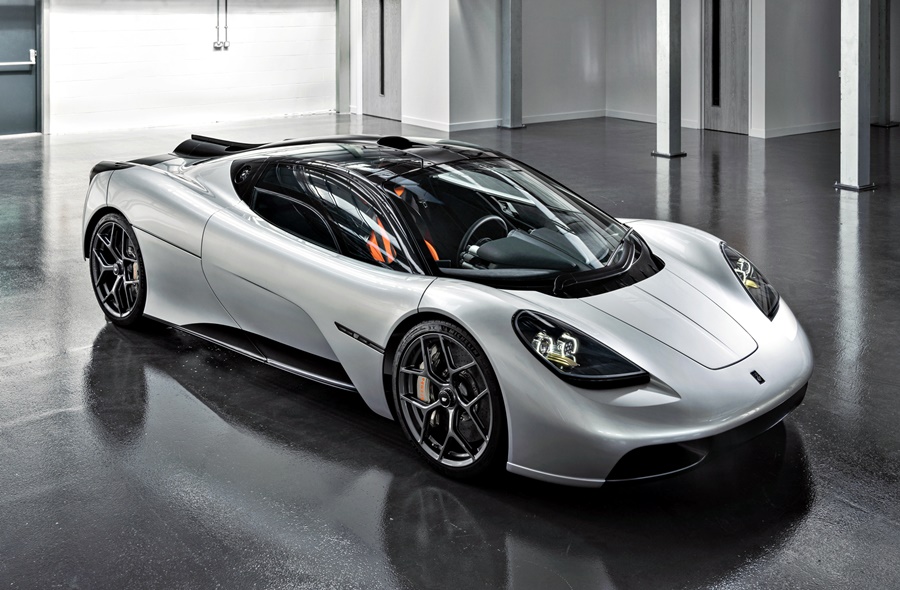 Gordon Murray’s much-anticipated supercar has been revealed in full for the first time and as expected, it has ground-breaking technical specifications. Designated T.50, it has been engineered to be the purest, lightest, most driver-centric supercar ever. His design for T.50 is the 50th in a prestigious line of racing and road cars he’s penned over his illustrious 50-year career – hence the number ‘50’.

Even better than the McLaren F1
Improving on his acclaimed McLaren F1 ‘in every conceivable way’, Professor Gordon Murray is leading the team that will begin building customer versions of the 986-kg supercar in January 2022. Justifying its £2.36 million (almost RM13 million) pricetag, the T.50 promises to deliver an unsurpassed driving experience. It is powered by a 100% bespoke 3.9-litre, 663 ps V12 engine that will spin up to a record-breaking 12,100 rpm. Helping it slip through the air will be the most advanced and effective aerodynamics ever seen on a road car – aided by a 400 mm rear-mounted fan.

The global premiere is the first time the clean lines of the exterior and the driver-focused interior have been seen. From his first ballpoint sketches to every engineering and design detail, Murray has led the Gordon Murray Automotive team and briefed and overseen suppliers to drive the project forward at an unrelenting pace. 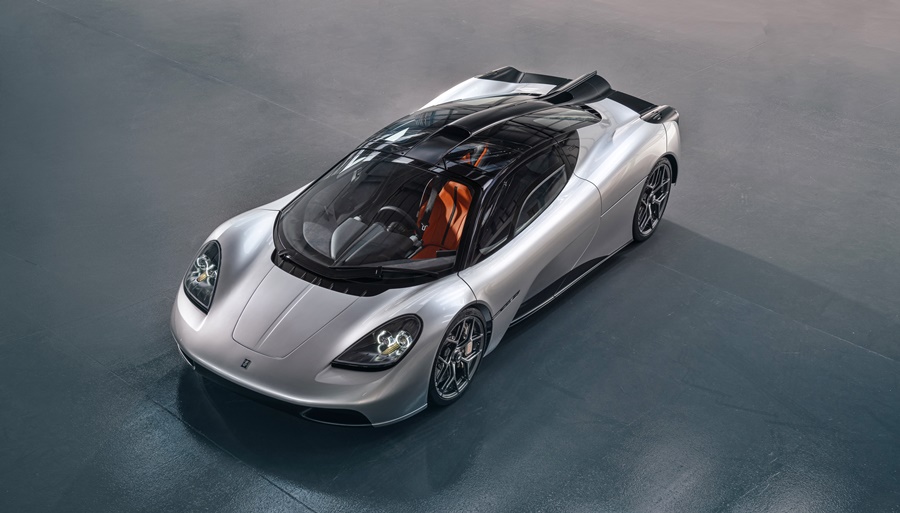 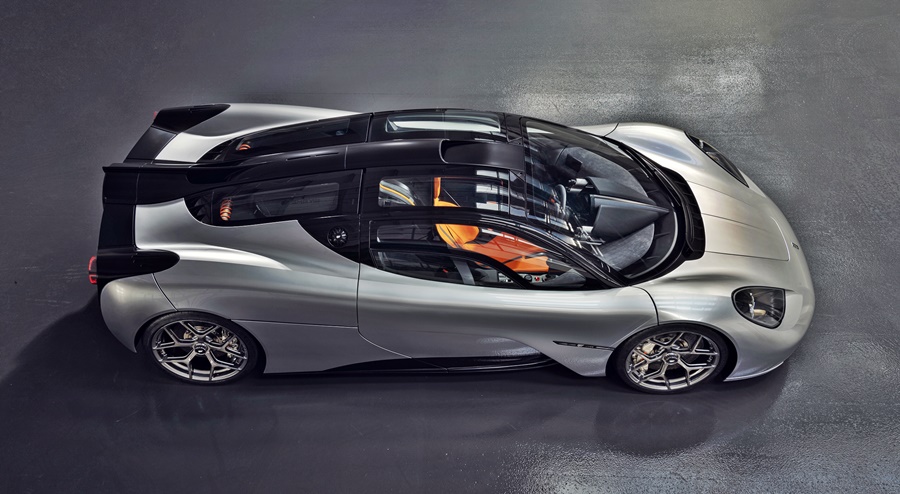 The most dominant characteristics of the exterior design are purity and balance, free from the wings, skirts and vents that adorn most modern-day supercars. The clean surfaces are enabled by the most advanced and effective aerodynamics ever seen on a road car, resulting in deliberately simple, beautiful lines and a timeless appearance.

The purity of the silhouette is broken dramatically when the pair of dihedral doors rise up and forwards, coming to rest high above the passenger cabin. Inside, the driver-centric approach is plain to see – from the central, jet fighter-like driving position, to the aerospace-grade primary and secondary controls arranged in an ‘ergonomic bubble’ around the driver. 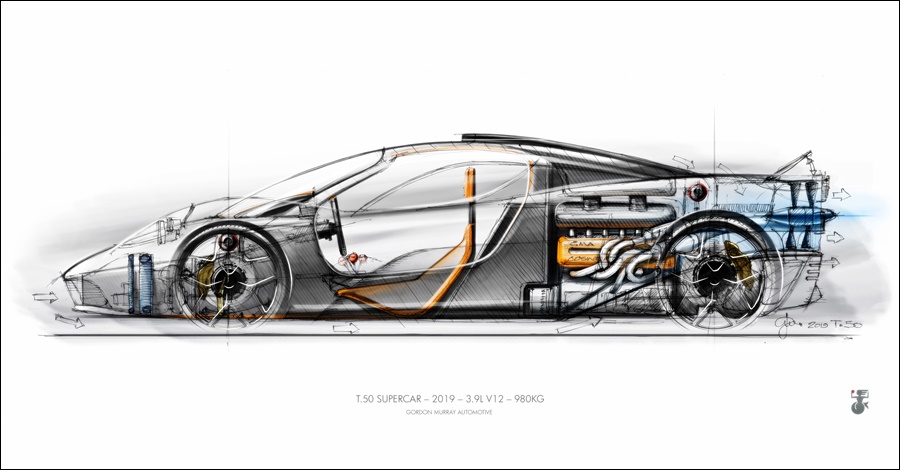 A true British sportscar
Quality of materials, the utmost precision, and simplicity of visuals define the whole car, but nowhere is this more evident than inside the cockpit. British suppliers are responsible for every major component throughout the interior, as well as every facet of the car’s exquisitely-engineered underpinnings – an attribute insisted upon by Murray who was determined the T.50 would be a true British sportscar. 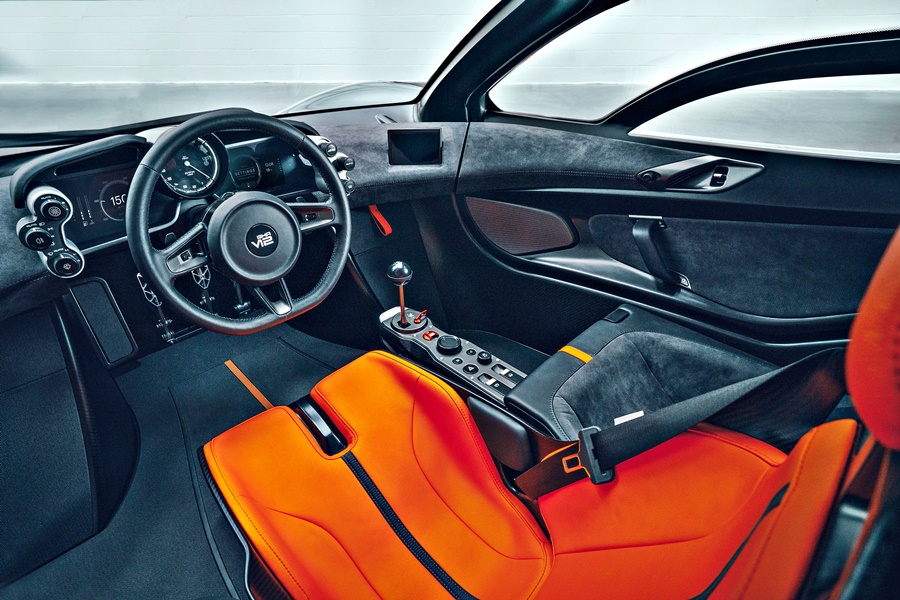 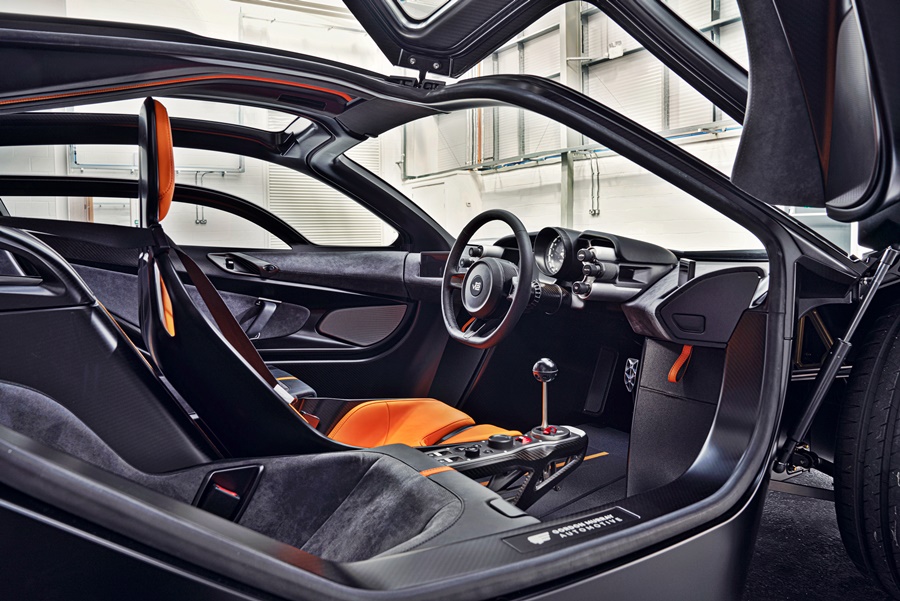 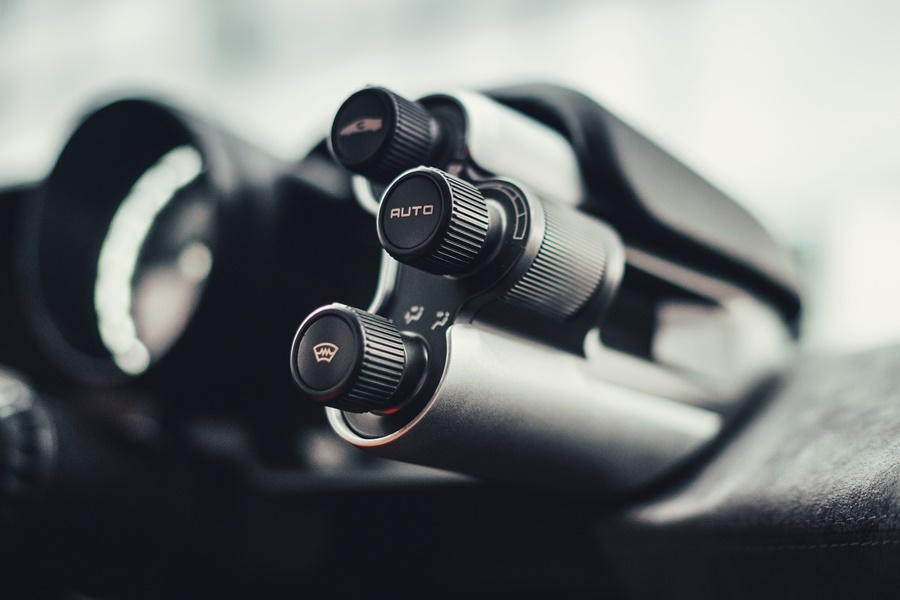 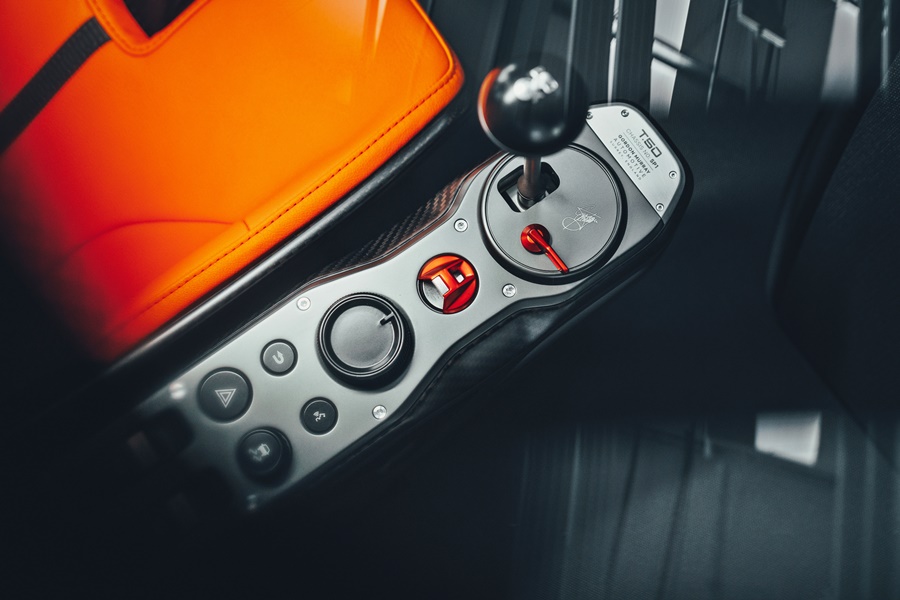 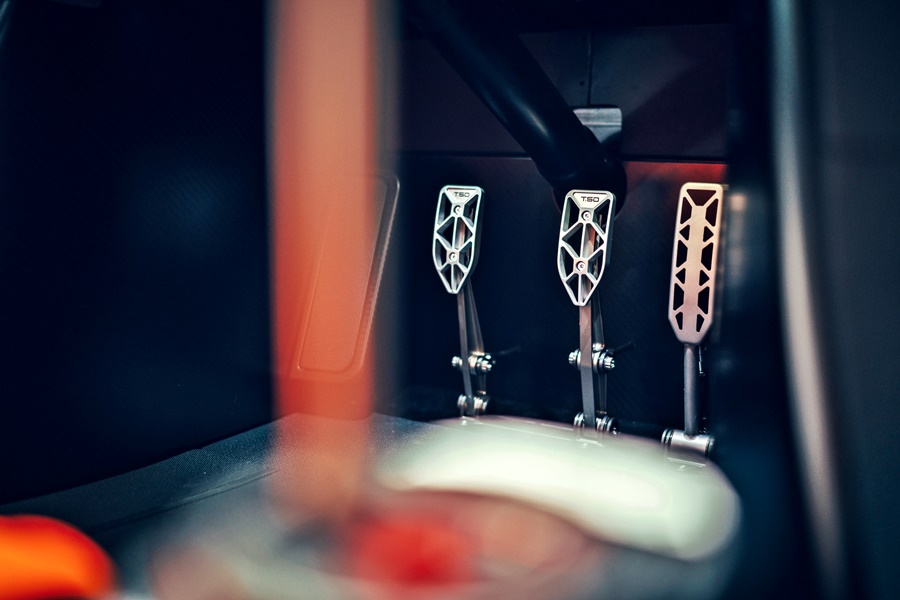 Superlative quality
From the exclusive V12 engine, plus what is said to be the best lightweight transmission, to the world-first aerodynamic package and the feather-light titanium throttle pedal, every element is 100% bespoke and crafted by a British company. Murray pushed each supplier to their limits to deliver ingenuity, the highest quality and of course new levels of lightness. 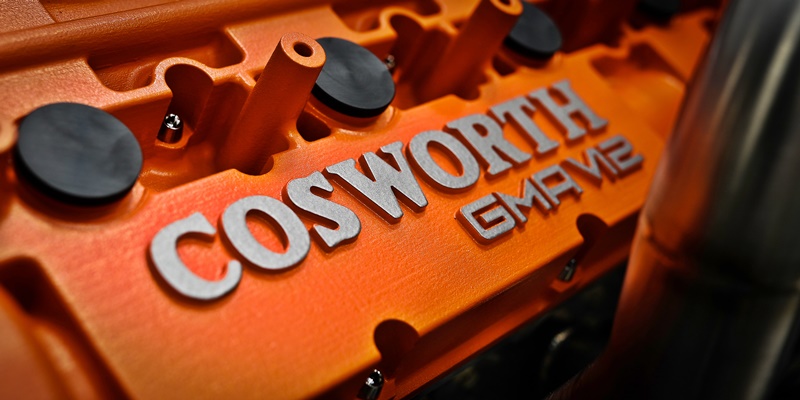 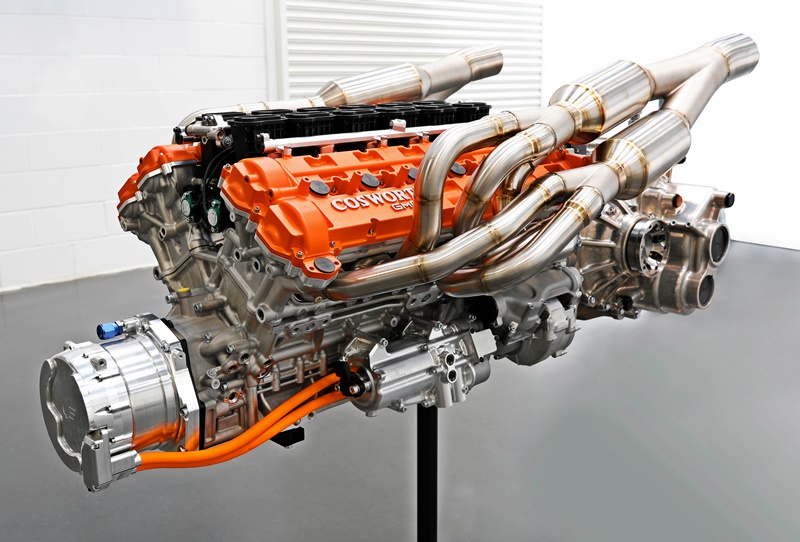 With a vision that the car, and every element of its componentry, would be considered ‘engineering art’, Murray set out to create a vehicle that surpassed all others, fostering new levels of pride and connection among owners. Every T.50 customer has the opportunity to meet Murray to discuss their car and personalise it inside and out. 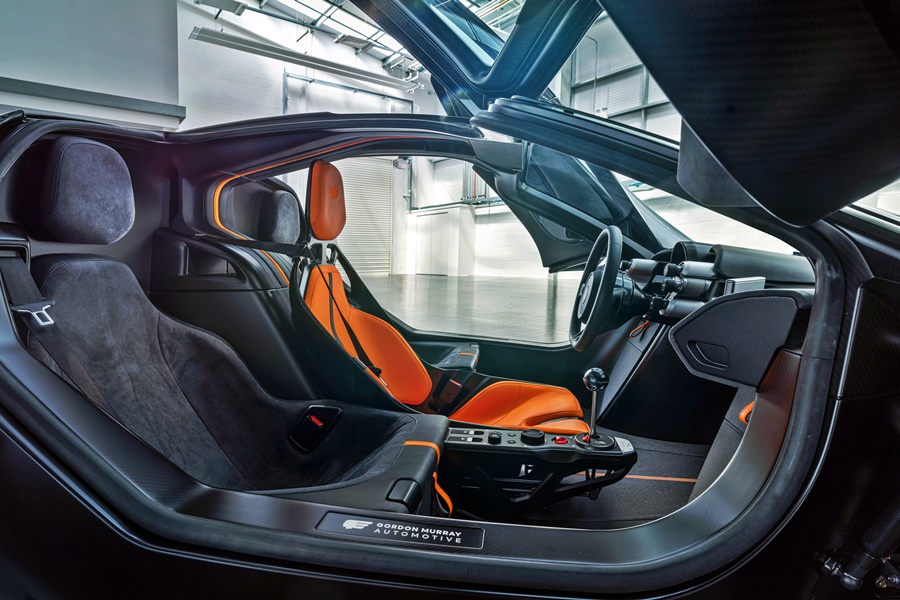 Part of this process includes a seat, steering wheel and pedals ‘fitting’ session – personalised to every owner – that will ensure the T.50 is ergonomically perfect and individualised for each discerning customer. Of course, when you are paying that much money, personal attention would only be expected. 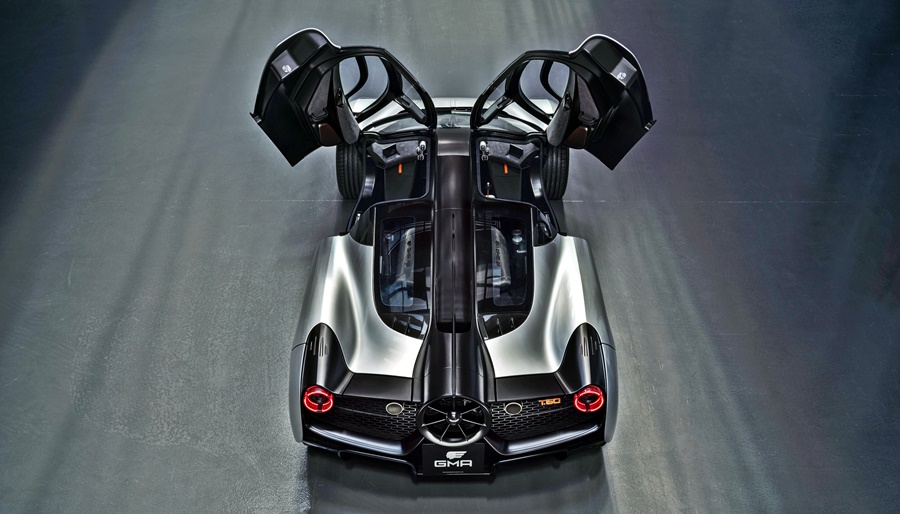 Accomplishing objectives and more
Commenting on the journey so far, Murray said: “For the past 18 months, the T.50 team has lived and breathed the ethos of the car, accomplishing everything we set out to achieve and more. I couldn’t be happier with the car and the team – they’re by far the best I’ve ever worked with.”

“Just 100 customers will share my vision, a car created to improve on the F1 formula in every conceivable way. With 30 years of technological and systems advancement, the time is now right to design the greatest analogue driver’s car. I believe no other company could deliver what we will bring to market in 2022, producing this British supercar will be my proudest moment,” declared Murray.

Gordon Murray’s T.50 supercar will use a fan to increase downforce 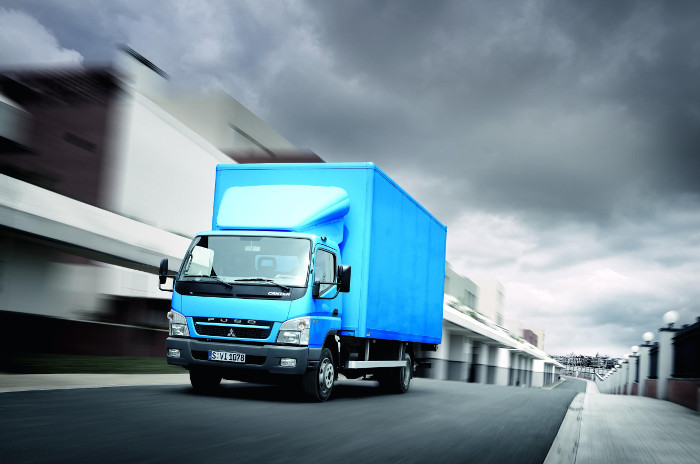 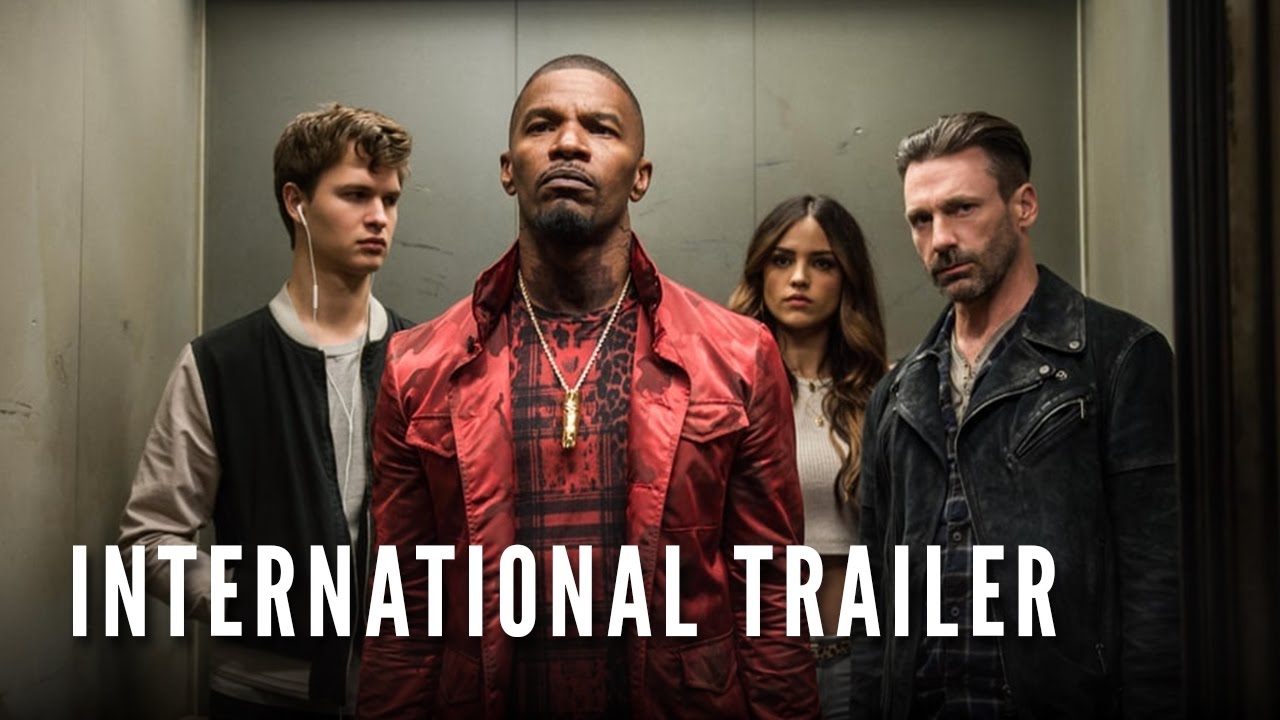 Baby Driver: A must watch movie for car fans! 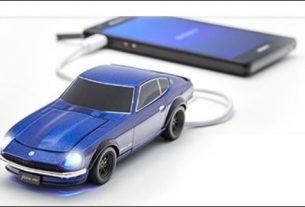