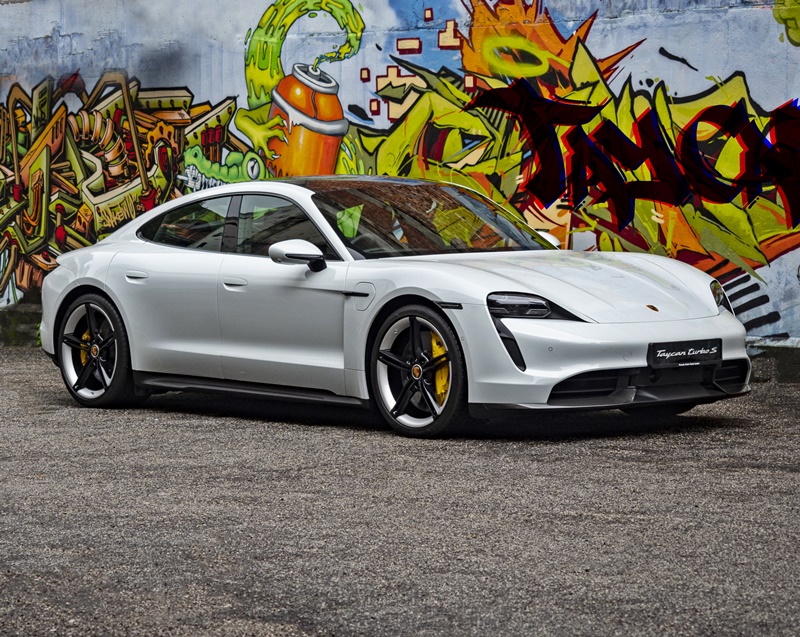 Electrically-powered cars have been in the news more and more in recent years but they have actually been around since the 1800s. In fact, between 1900 and 1912, a third of all vehicles on US roads were powered by electricity, However, when the internal combustion engine (ICE) improved in reliability and performance, electric cars were pushed into extinction as their performance stagnated. After the 1930s, there was little interest in such cars.

It would not be until the 21st century began that pure electric cars would make a comeback, although the hybrid powertrain which used an electric motor with an ICE debuted just as the 20th century was ending. The electrification of cars got underway and this decade will see a surge of models appearing as a number of companies have them in final stages of development.

The early electric cars have had limited performance which raised the question of whether one of the elements of driving pleasure – high performance – would eventually be lost. Hybrid technology advanced a lot and showed that it was possible to have electrification and high performance – but that still included a ICE. What about a pure electric propulsion system? 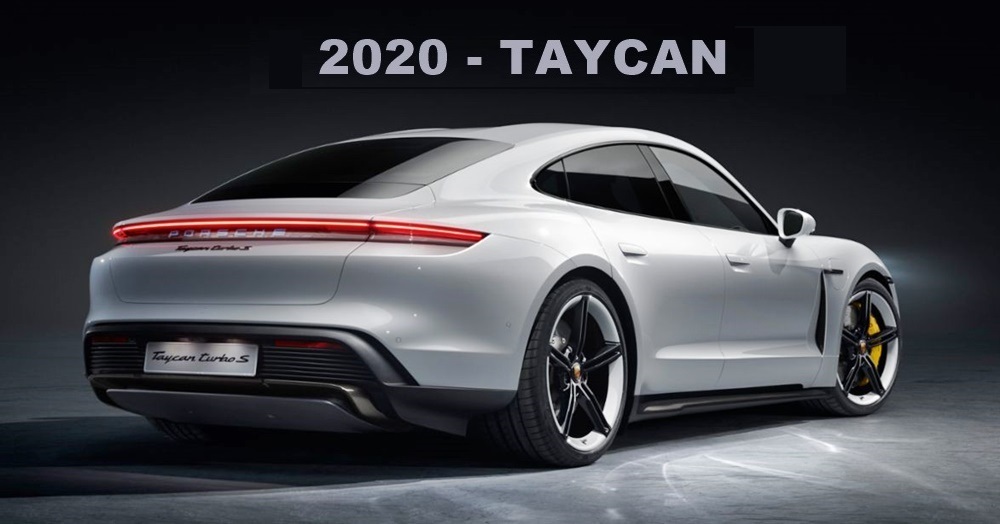 Full electric but with Porsche DNA
With the new Taycan, launched today in Malaysia by Sime Darby Auto Performance (SDAP) , Porsche shows that high performance need not be lost just because of electrification. Just as its engineers made sure that when the company introduced its first SUV, it would still have the dynamics of a sportscar and the character of a Porsche, they also made sure that the brand’s first all-electric car would do justice to the name ‘Porsche’.

Actually, an electrified car is not entirely new to Porsche and with much attention given to the pioneering Toyota Prius hybrid, and Nissan LEAF and Tesla electric cars, the company reminded the world that Dr. Ferdinand Porsche designed what can be considered the world’s first hybrid powerplant for a car back in the late 1890s. And it was even produced until 1915 although only a small number of cars were actually sold. 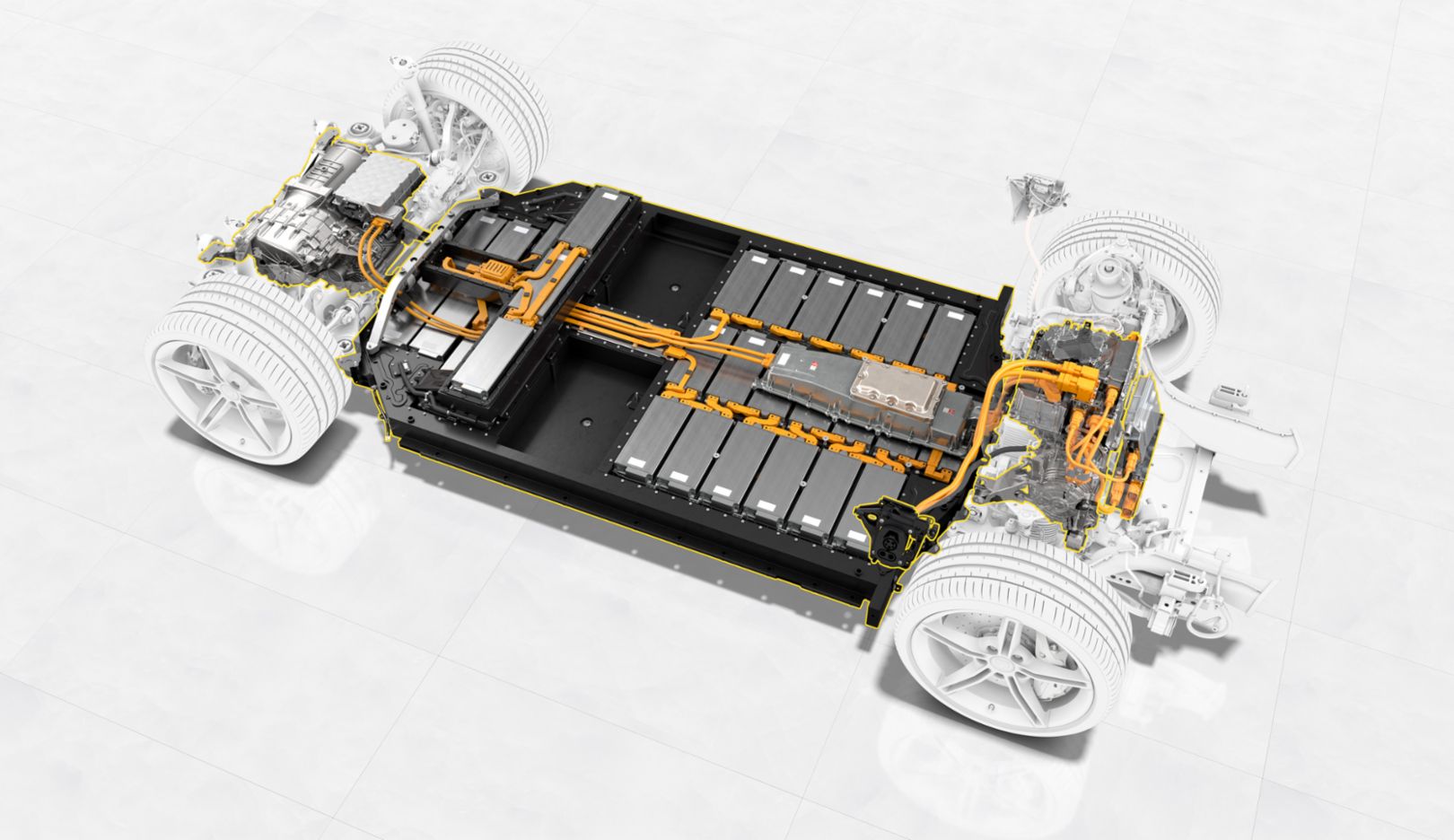 For example, the Taycan is the first production electric vehicle with a system voltage of 800 volts, instead of the usual 400 volts. This is a particular advantage for owners while on the move as full recharging of the lithium-ion battery pack can be done in just over 36 minutes. However, this requires a 175 kW direct current (DC) charger.

The overall capacity of the Performance Battery Plus is 93.4 kWh and can conduct higher currents, thus speeding up the charging process significantly. Taycan drivers can also charge their cars with up to 11 kW of alternating current (AC) at home using the Porsche Mobile Charger Plus kit. The car can also be recharged at public charging stations, some of which do have the DC facility.

Those who are close enough to a Porsche Centre in Malaysia can get free use of the DC chargers installed at each location. During the charging time of around half an hour, the owner can enjoy a cup of coffee at the lounge or even do some work.

Porsche performance levels
Energy from the battery pack, located under the middle of the car, powers the electric motors which can generate up to 560 kW (761 ps) overboost power in combination with Launch Control in the flagship Taycan Turbo S, and up to 500 kW (680 ps) in the Taycan Turbo. If you wonder why ‘Turbo’ is used when there is no turbocharger, it’s just Porsche’s way of providing a sort of reference point to the relative performance levels of the models.

There’s also a third model – the Taycan 4S – which has a standard Performance Battery. This gives a performance level of up to 390 kW (530 ps) via overboost power in conjunction with Launch Control. It can be increased to a maximum of 420 kW (571 ps) with the optional Performance Battery Plus. 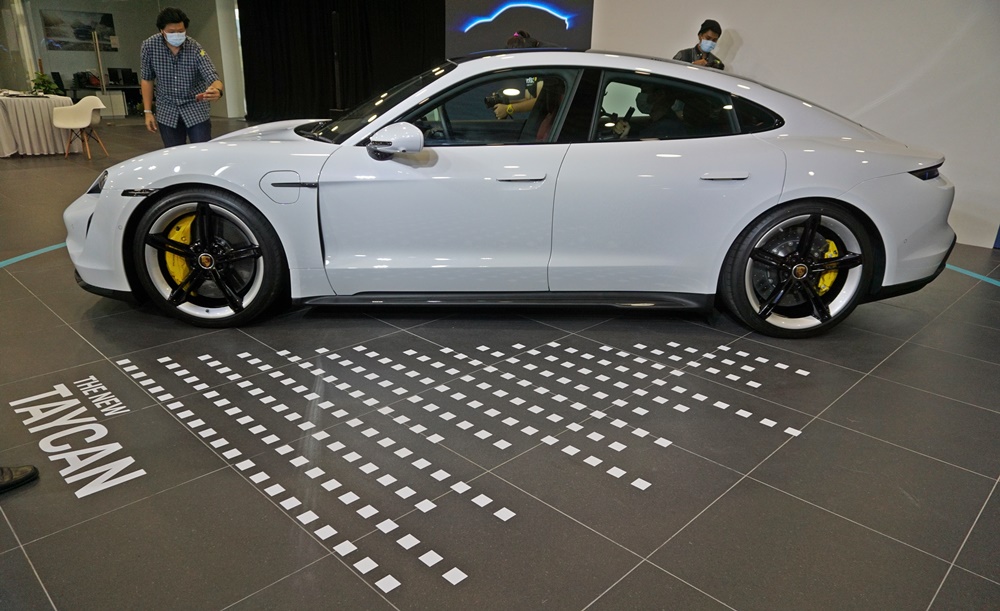 As would be expected, the performance numbers reflect the high torque characteristic that electric motors generate from almost standstill. The Taycan Turbo S, with 1,050 Nm of torque will go from 0 to 100 km/h in a claimed 2.8 seconds while the Taycan Turbo, with 850 Nm, does the same run in 3.2 seconds. The Taycan 4S is no slowpoke either and will still do 0 to 100 km/h within 4 seconds and get up to 250 km/h.

The profile of the driving modes essentially follows the same philosophy as in other Porsche models. This is supplemented by special settings which enable optimum use of the electric drive. Sport Plus and Individual modes are part of the Sport Chrono Package, which comes as standard on the Taycan Turbo S. 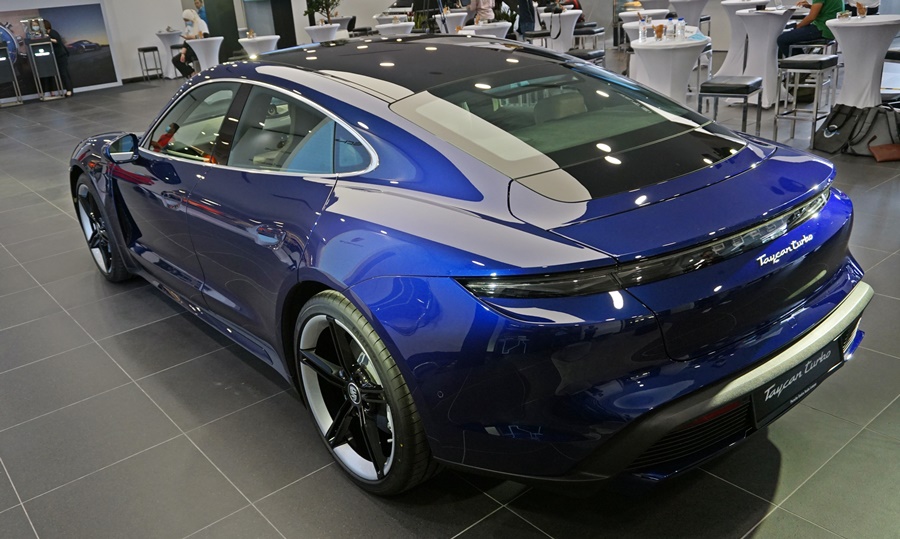 So in as far as straightline performance is concerned, these Porsches can provide the same adrenalin rush as their ICE brothers. However, the feeling won’t be the same with the electric motors being smoother as there isn’t that distant reverberation from reciprocating pistons that can be discerned through the steering wheel and pedals.

Perhaps Porsche engineers are working on creating some sort of ‘classic feel’ but for now, there is the Porsche Electric Sport Sound. This is basically a sound clip that comes on during acceleration, adding a sense of ‘drama’ in spite of the electric whine. In some markets, it’s an optional feature but SDAP has specified it as standard for all the Taycan models.

How far can you go?
What about range? This is something that is on the minds of most people who consider an electric car because you can’t just pull into a station to get extra volts when you need them. The recharging network is growing but nowhere close in coverage to the petrol station network which is the product of over 100 years. 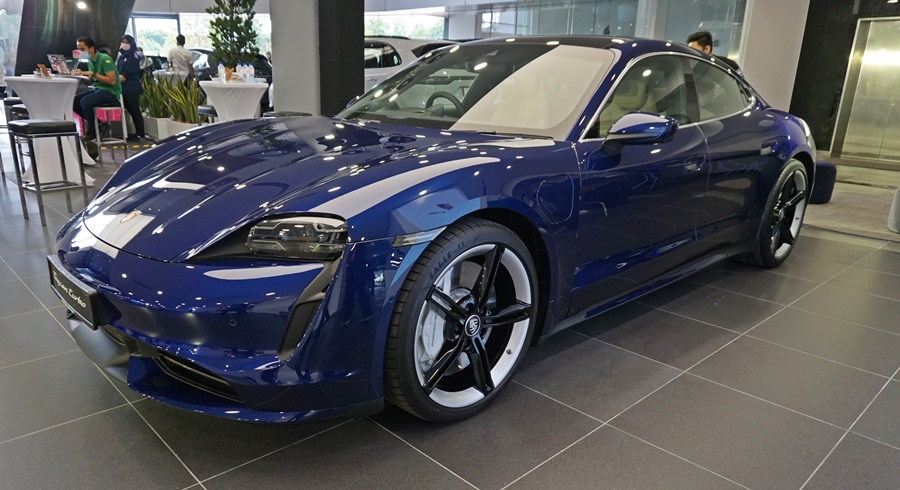 Just like the ICE Porsches, the more powerful the car, the less range it will have (and how the car is driven is still a factor). In this case, the range is dependent on the capacity of the battery pack. The 79.2-kWh battery pack of the Taycan 4S can last for a claimed range of 408 kms and if the owner installs the Performance Battery Plus upgrade with about 18% more capacity, the range can be extended another 55 kms. The more expensive Taycan Turbo and Turbo S come with the 93.4-kWh battery pack and for the former, the range is claimed to be up to 452 kms while for the latter, it’s between 390 and 416 kms.

While the ICE is non-existent, there are still many elements of the Taycan which are still ‘conventional’ and familiar. Around the chassis, there’s still adaptive air suspension with 3-chamber air springs and Porsche Active Suspension Management (PASM). The double wishbone front axle and multi-link rear axle are of aluminium and at each wheel are Porsche Ceramic Composite Brake discs. 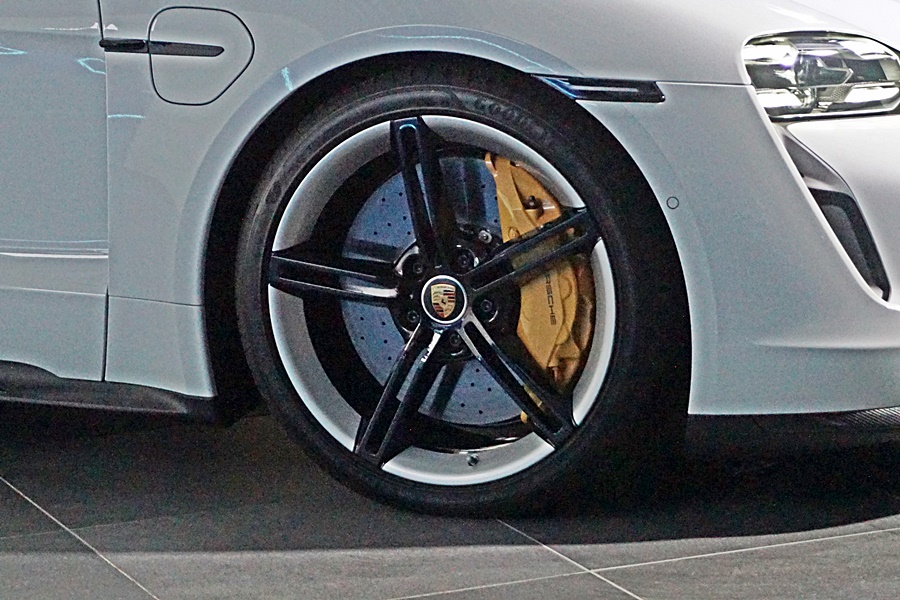 Futuristic look but still familiar
While Toyota sought to make an impact with a ‘futuristic look’ for the world’s first mass-produced hybrid car, Porsche’s designers have given their first all-electric model a blend of a familiar form with some advanced styling elements. We were already given a preview with the Mission E concept in 2015 and many of the ideas of designer Mitja Borkert have been retained.

The traditional Porsche form (with a Cd of 0.25) is evident, with the Panamera coming to mind. The LED matrix headlights which form a visual unit with the air curtains, provide a futuristic touch. The 4-point daytime running lights that are typical of the brand are flatter and wider than any other Porsche.

The lighting technology includes PDLS Plus where the matrix deactivates segments of the permanent high beam cone in a targeted way. 84 individually controlled LEDs can be adjusted as required by switching off or being dimmed so specific areas ahead can be fully illuminated.

Look of 1963 – as well as tomorrow
As with the exterior, the designers also gave the interior a familiar look and feel. They even looked to the original 911 from 1963 for inspiration when designing the dashboard. The freestanding 16.9-inch curved instrument cluster forms the highest point on the dashboard while a central, 10.9-inch infotainment display and an optional passenger display are combined to form an integrated glass band in a black-panel look and provides the ‘look of tomorrow’. 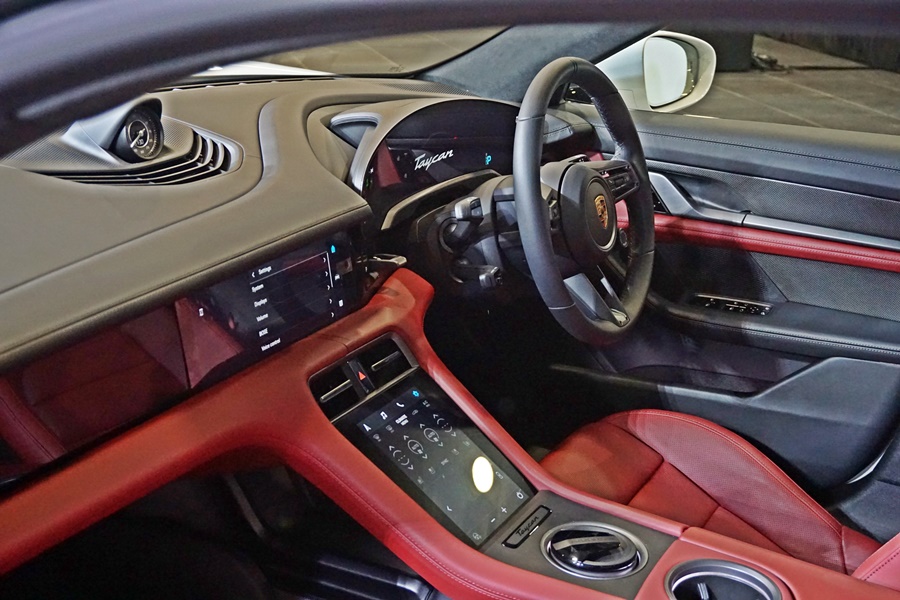 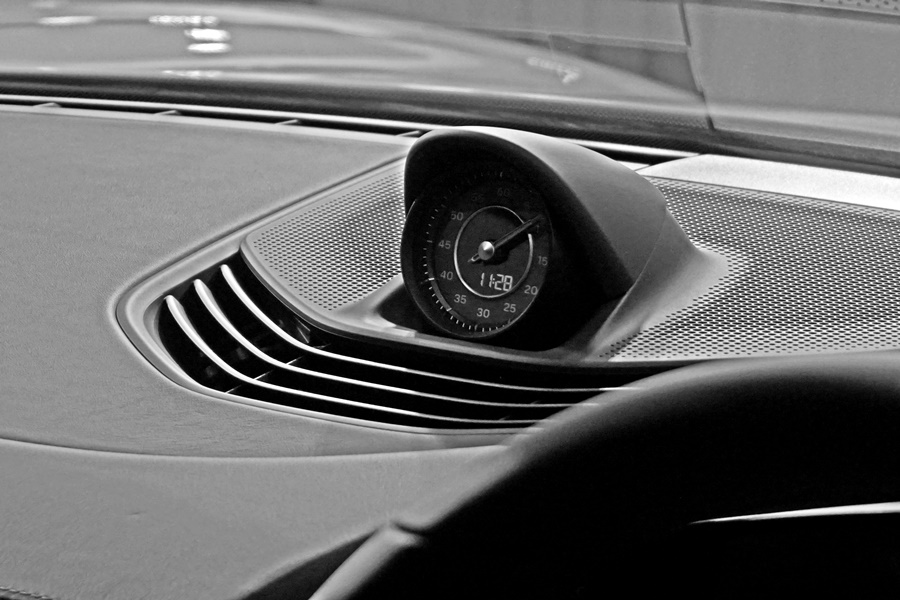 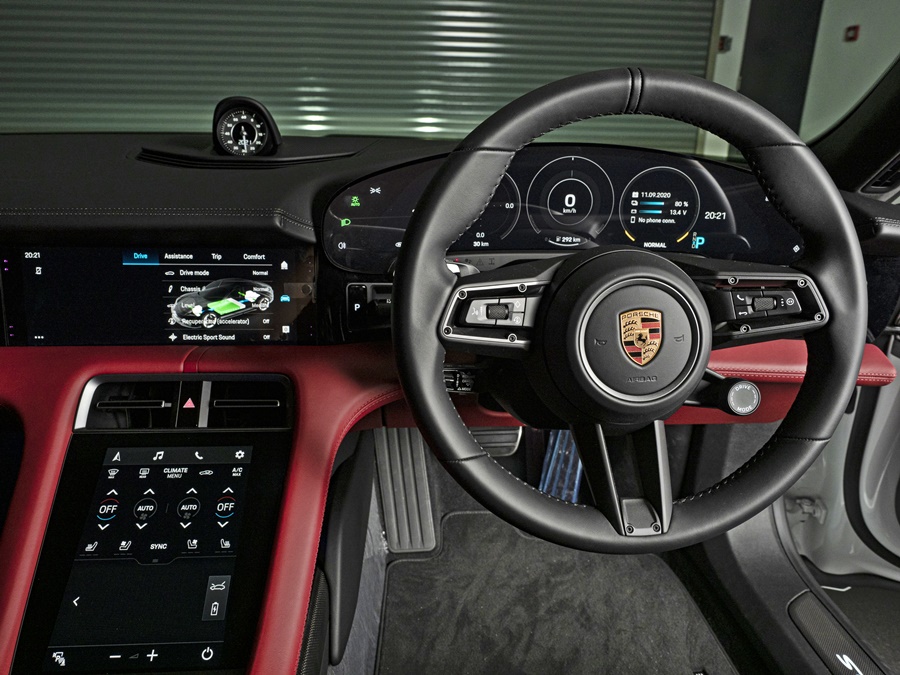 All user interfaces have been completely re-designed for the Taycan. The number of traditional hardware controls, such as switches and buttons, have been greatly reduced. Instead, control is intelligent and intuitive – via touch operation or voice control.

Sustainability is a big thing in manufacturing today and the sustainable concept of the electric sports car is promoted by offering an entire leather-free interior standard for the Taycan Turbo S and Taycan Turbo (option for the Taycan 4S). The upholstery uses Race-Tex microfibre, a textile partly made from recycled polyester fibres while the flooring is of Econyl recycled fibre, made from recycled fishing nets. 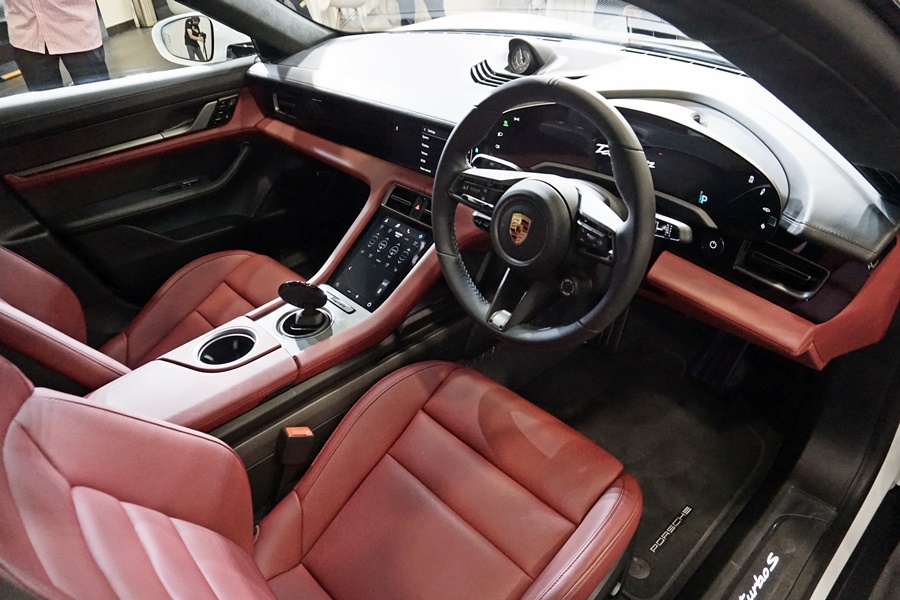 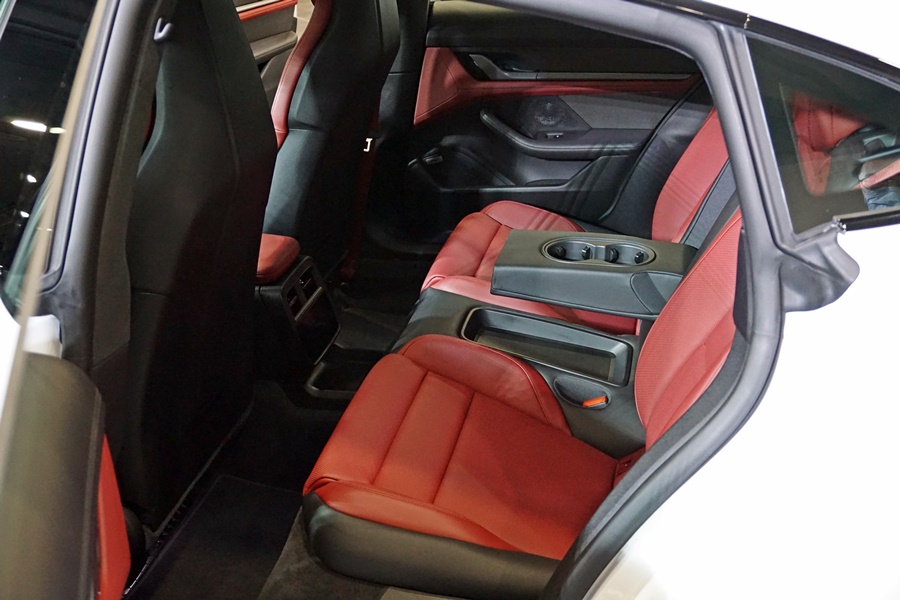 As safe as any Porsche
Needless to say, all the active safety systems are provided and there are up to 8 airbags around the cabin to cushion the occupants from serious injuries. The Taycan has already been tested by EuroNCAP which gave it a maximum score of 5 stars. While the lightweight bodywork structure is conventional in one sense, it has also had to take into consideration the presence of the high-voltage battery pack which is cleverly integrated into the bodyshell structure.

The crash sensors of the Taycan were developed to meet the specific requirements of electric vehicles. Additional sensors are therefore used to reliably disconnect high-voltage equipment in the event of a crash. Also in the event of an accident where the airbag is deployed, the battery connection to the vehicle is disconnected as a precaution so that no voltage is live. 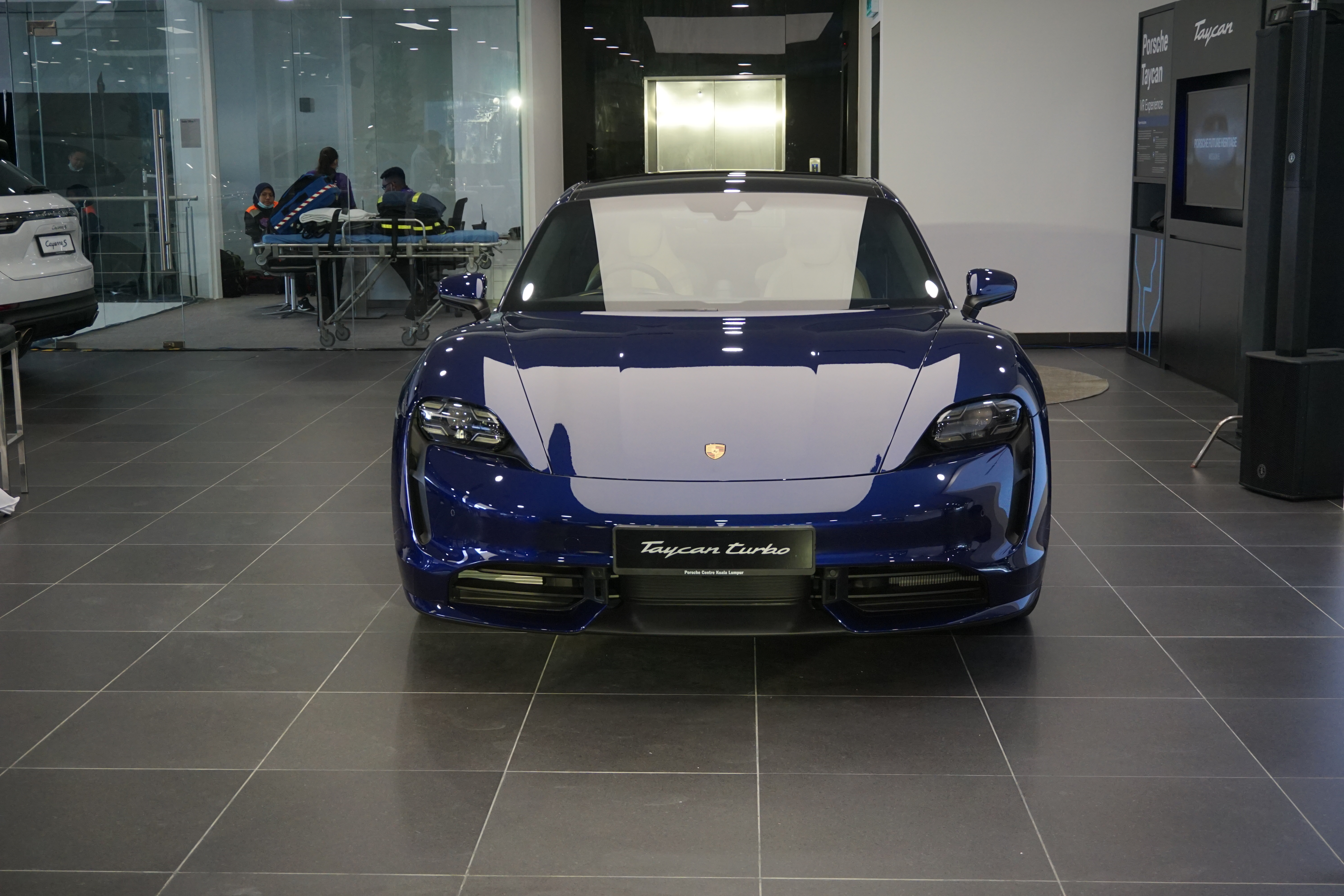 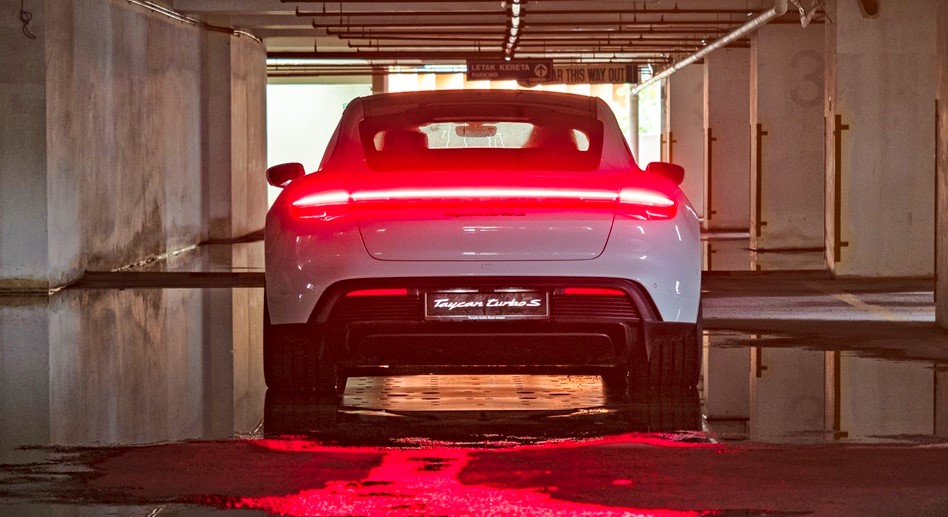 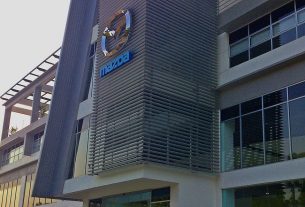 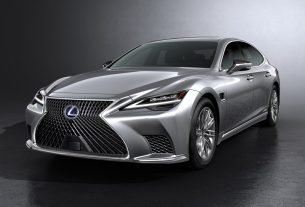 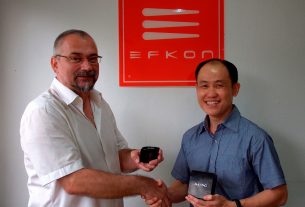