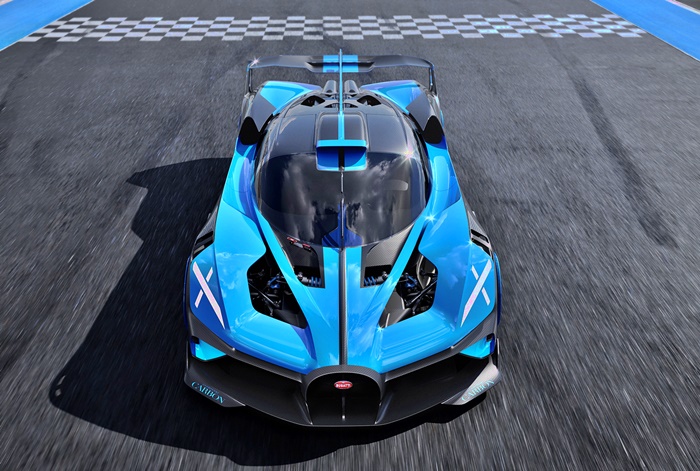 For a manufacturer to make a production model, the design cannot be too complex so as to not be too expensive to manufacture, and safety and emission regulations also need to be met. Designing a car for track use offer more freedom technical though safety is still important and there are also competition regulations to conform to.

Concept cars are the best then as they can do not need to meet regulations and can be have advanced technology that is still not ready for commercialisation. Typically, they show the design direction of the brand, and perhaps some new ideas being explored.

This is the case with the Bugatti Bolide, which is being presented as the answer to the question ‘what if Bugatti built a radically light vehicle around its iconic 8.0-litre W16 engine?’. The Bolide concept is a track-oriented hyper sportscar derived from production model intended to be the most extreme, uncompromising, fastest and lightest Bugatti concept car in the company’s recent history. 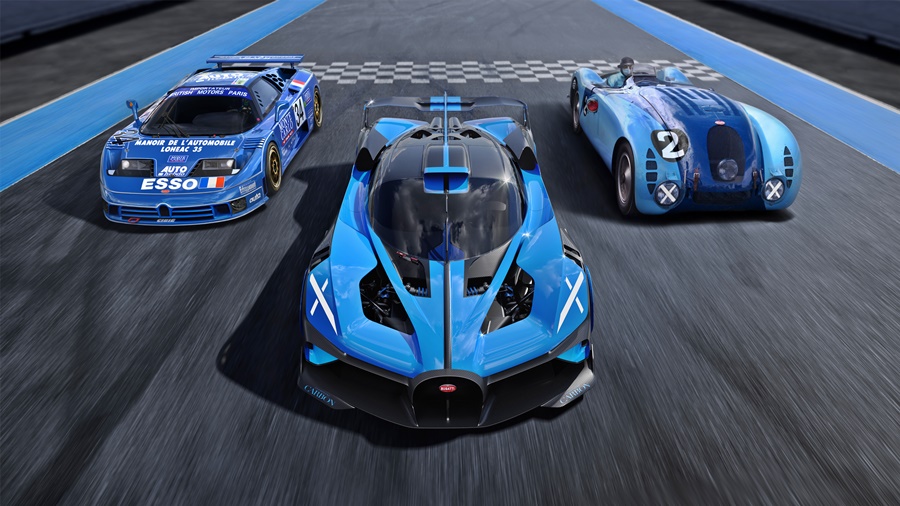 A ‘what if’ experiment
“Bugatti stands for the continuous quest for technological innovations – in alignment with the company’s brand values of excellence, courage, dedication. And Bugatti never stands still. We are perpetually aiming for new and exciting goals, and the question that we always keep in mind is: what if?” said Stephan Winkelmann, President of Bugatti.

“We asked ourselves how we could realise the mighty W16 engine as a technical symbol of the brand in its purest form – with solely four wheels, engine, gearbox, steering wheel and, as the only luxury, two seats. Important aspects of our considerations were fine-tuning our iconic powertrain without any limitations as regards the weight-to-power ratio. These considerations resulted in the Bugatti Bolide.” 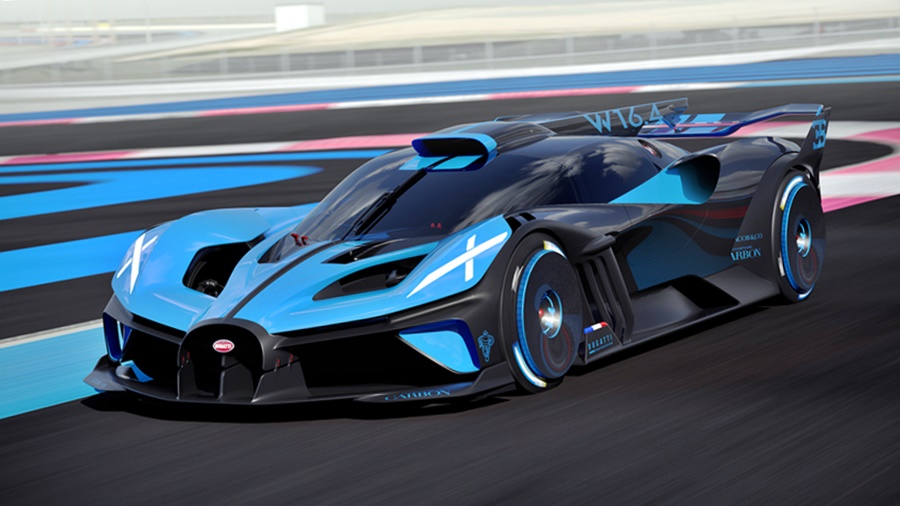 Powertrain designed specifically for the racetrack
Explaining the concept further, Stefan Ellrott, member of the Board of Management of Bugatti and Head of Technical Development, said that the Bolide is the ultimate answer to the question of what if Bugatti built a track-focused hyper sportscar that met the FIA’s safety requirements. 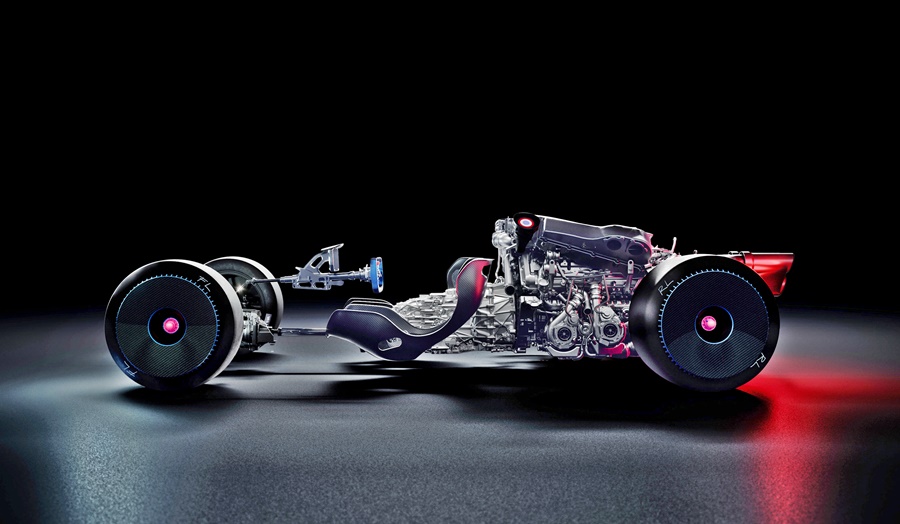 “Designed around the W16 powertrain with the minimum body structure and unbelievable performance data. The result: the smallest possible shell for a breathtaking performance vehicle that allows the W16 to truly come into its own,” he explained. “All of Bugatti’s expertise has been condensed into the Bugatti Bolide. It is therefore an innovative information source for future technologies. The Bolide is thus more than just an intellectual exercise.”

In terms of technology and organisation, the Bolide is one of the most ambitious projects for its lead engineer, Frank Gotzke. After playing a crucial role in the development of the Veyron 16.4 and the Chiron, he was given the responsibility for the technical concept of the Bolide. In only 8 months, he created a completely new sportscar around the Bugatti W16 all-wheel drive powertrain, which was highly modified for the project.

The 8-litre 16-cylinder 1,850 ps engine was engineered specifically for use on the racetrack and has an optimised engine and gearbox, especially for higher engine speeds. Among other things,  there are 4 specially developed turbochargers with optimised blades in order to build up more boost pressure and power at higher engine speeds. In order to achieve optimum lubrication even under extremely high centrifugal forces, the oil circuit, oil pressure, check valves, baffles, oil tanks, oil reservoirs, and pump design of the dry sump lubrication have been optimised. The weight of the drive system is also significantly reduced.

Instead of water-to-air intercooling, the Bolide has air-to-air intercooling with water pre-cooling for optimal performance on the racetrack. Two water coolers, which are arranged in front of the front axle, provide a more effective radiator system in terms of flow than is customary even in Formula 1. Three air-cooled oil coolers for engine, transmission, and differential with water pre-cooling reduce the temperature, while newly developed and hybrid carbon titanium turbofan radial compressors ventilate and cool the high-performance racing brake system. 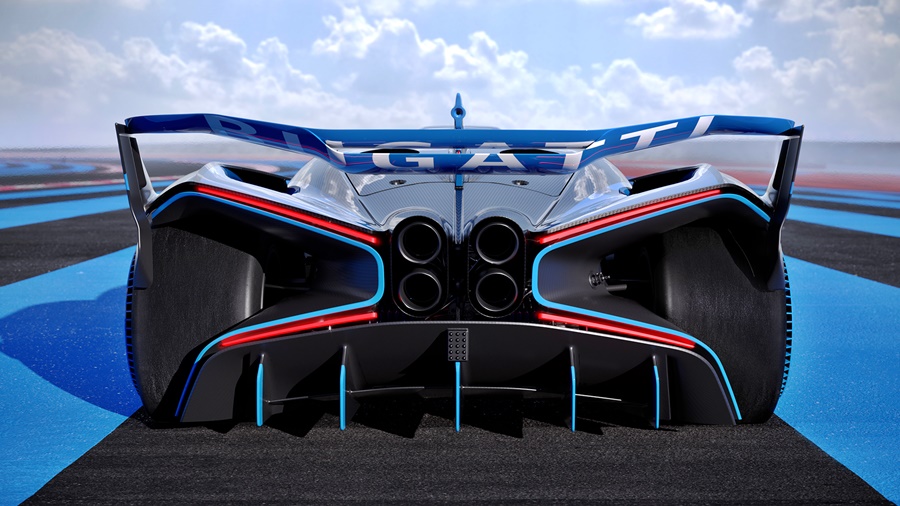 In order to achieve a dry weight of 1,240 kgs for that impressive weight-to-power ratio of 0.67 kg per ps, every avenue was explored, both in terms of what is currently feasible and what will be possible in the future. These included expensive features like having all the screw and fastening elements of the made completely out of titanium. In addition, hollow, thin-walled functional components made of an aerospace titanium alloy are used in many places.

A worldwide innovation is the morphable outer skin of the intake scoop on the roof, which provides active airflow optimisation. If the car is driven at a slow speed, the surface of the scoop remains smooth. In contrast, a field of bubbles bulges out when driven at fast speeds. This reduces the aerodynamic drag of the scoop by 10% and ensures a 17% reduction in lift forces. In addition, the flow onto the rear wing is optimised. At 320 km/h, the downforce is at 1,800 kgs at the rear wing and 800 kgs at the front wing. 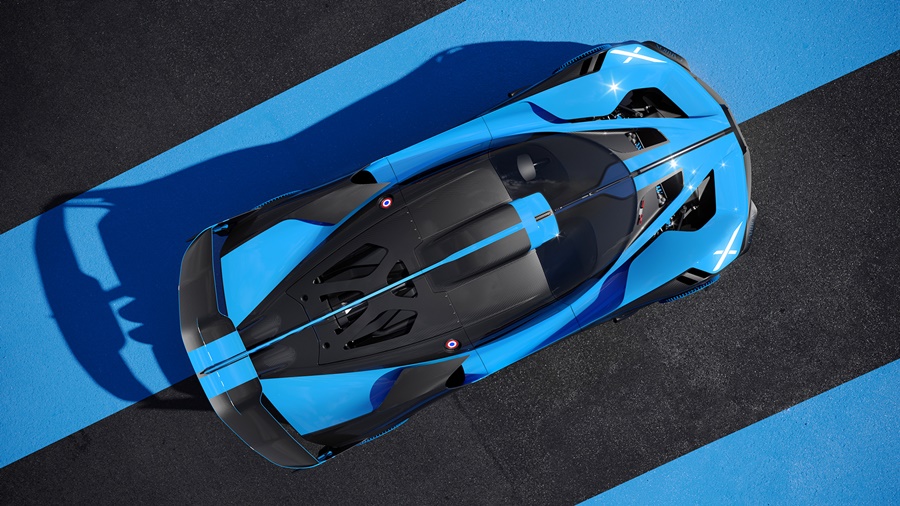 As in Formula 1, the Bolide uses lightweight brakes with ceramic discs and coatings. The front forged magnesium rims with central lock weigh 7.4 kgs, while the rear ones weigh 8.4 kgs. 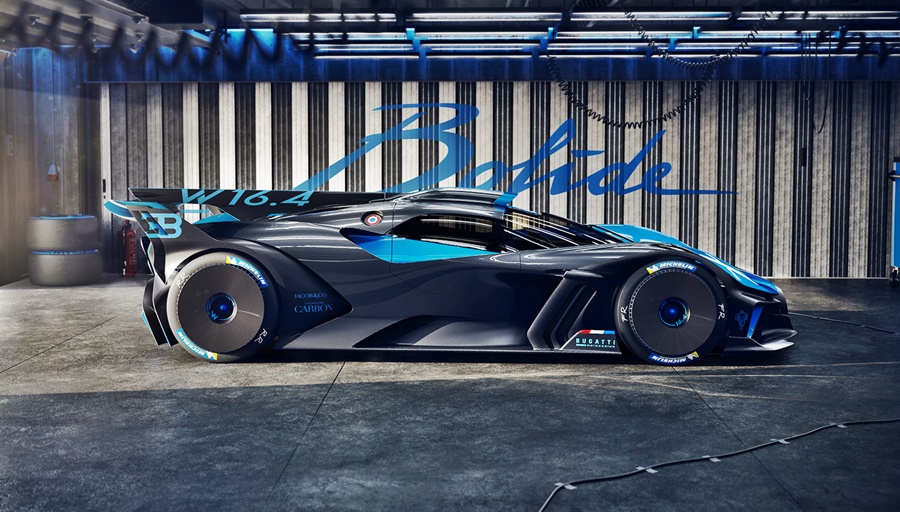 With an overall height of only 995 millimetres, the Bugatti Bolide is exactly the same height as the historic Bugatti Type 35, and about 300 millimetres flatter than the Chiron. Like in an LMP1 racing car, the occupants fold up the doors that are hinged at the front at an angle, sit on a sill that is only 70 mm wide and then position their feet in the interior. 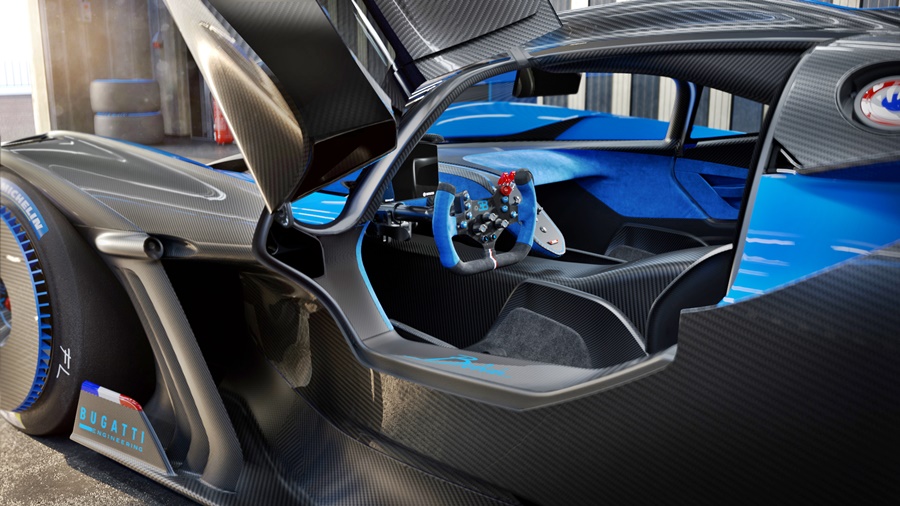 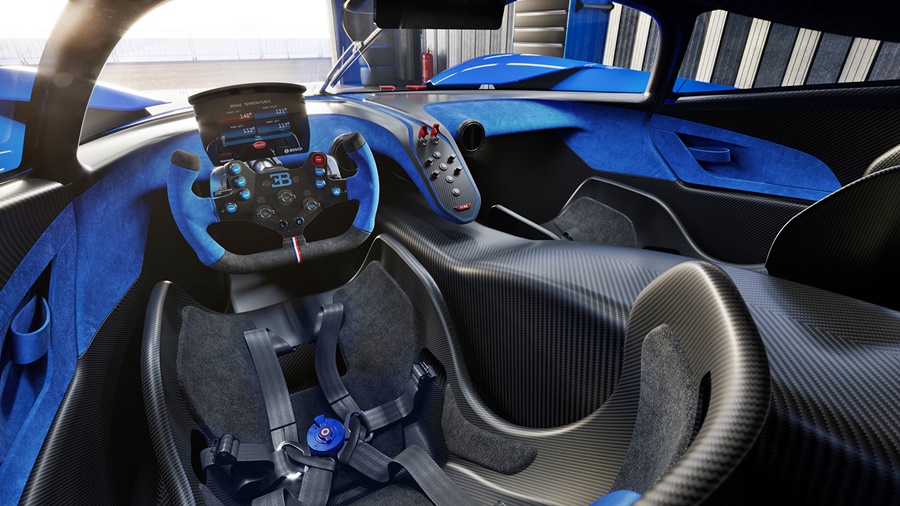 Inspired by X-1 experimental jets
The stylistic challenge was to transform the unyielding demands of aerodynamics and lightweight construction into an aesthetic that reflects the unique Bugatti DNA, but at the same time illustrates the ambition of an impressive weight-to-power ratio. The overall appearance is dominated by air ducts that are more reminiscent of aerodynamically sophisticated Formula 1 racing cars than classic sportscars.

The appearance of the Bolide invokes the so-called ‘X-planes’ of aviation history that pushed the edge of the performance envelope. It is indirectly reminiscent of the Bell X-1 jet aircraft which was flown by Chuck Yeager, who was the first person to break the sound barrier in 1947. The Bolide does not get up to that speed, of course, but it is claimed to be able to go past 500 km/h. 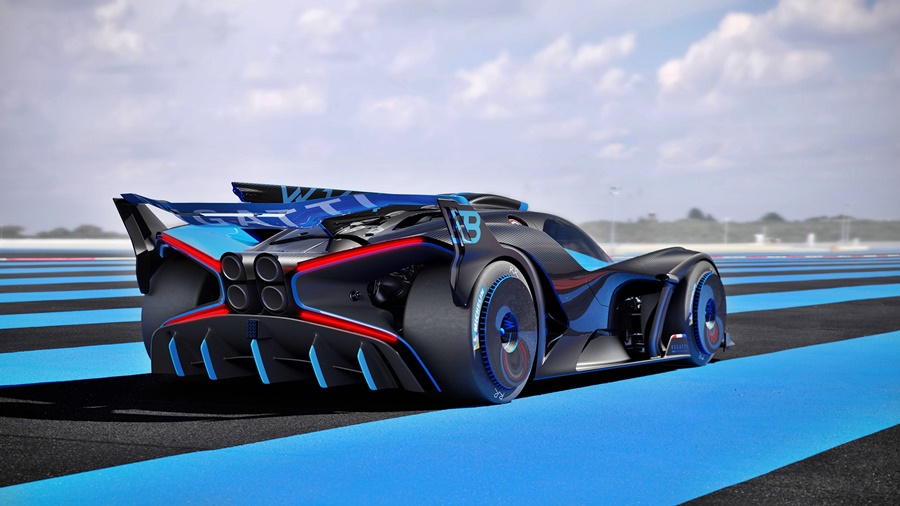 “For the first time, we are showing what the W16 engine is really capable of. We have freed the vehicle of all baggage and have illustrated and combined the engine with the lightest possible chassis to create the ultimate Bugatti and to ensure the ultimate driving experience. With the Bolide, we are presenting our interpretation of a Bugatti track car of modern times to Bugatti enthusiasts all over the world and finally make their most fervent wishes come true,” said Winkelmann, adding that production plans are not decided yet.