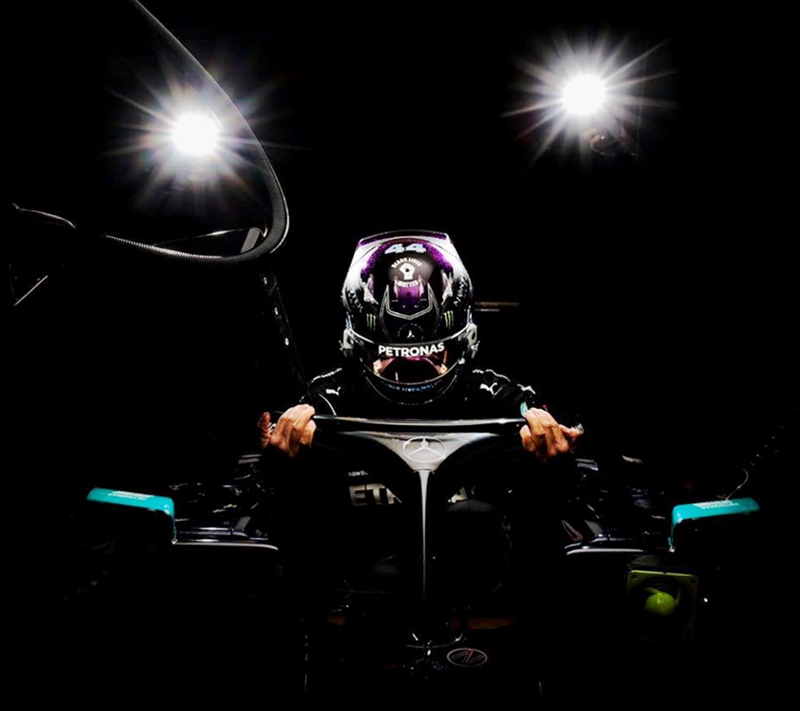 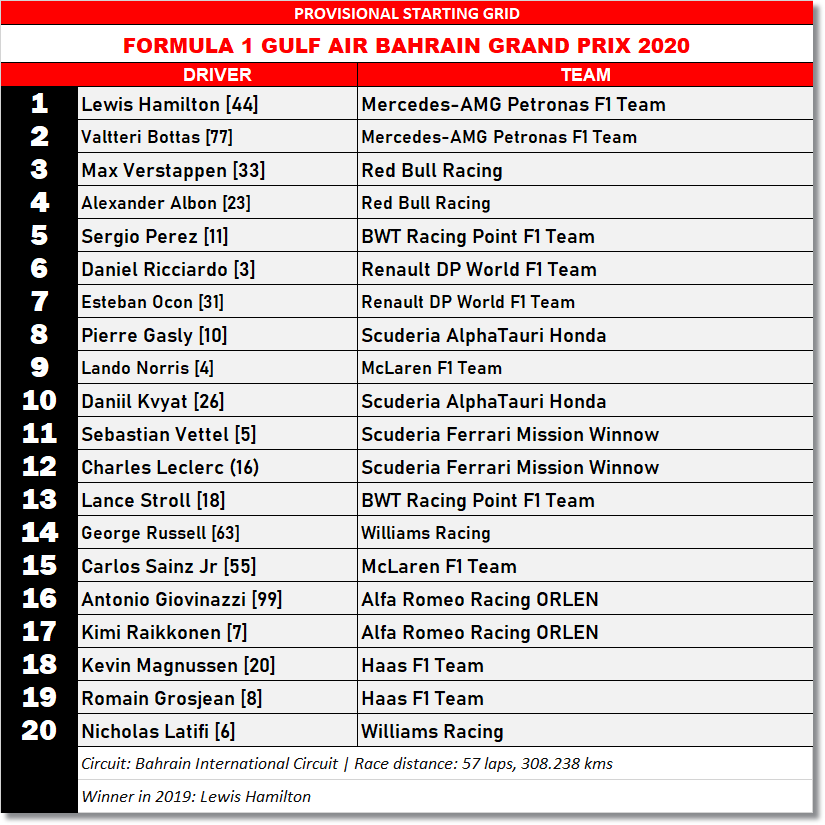 The disrupted 2020 Formula 1 World Championship enters its closing phase this weekend with the first part of a Middle East triple-header. It will certainly be gruelling for the teams who have endured a compressed calendar that only started in the second half of the year after the COVID-19 pandemic forced postponements and cancellations as countries tried to get the pandemic under control.

The first of the final three rounds will be the Bahrain Grand Prix at the circuit in Sakhir. It has been the venue of the Bahrain GP since 2004 and only in 2011 was the event not run due to domestic problems. 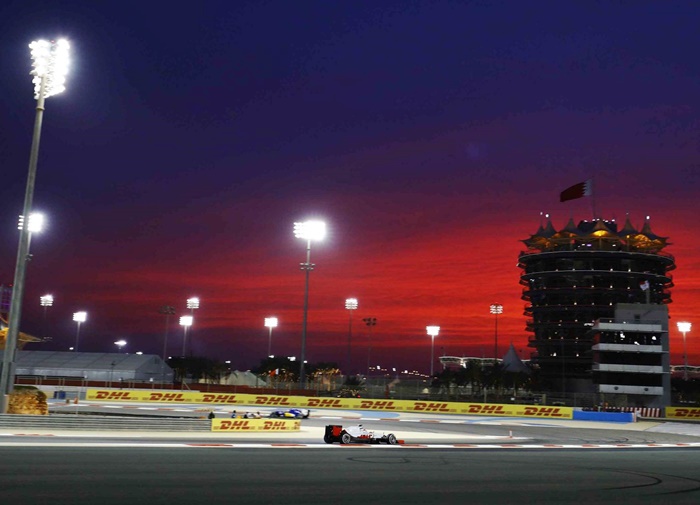 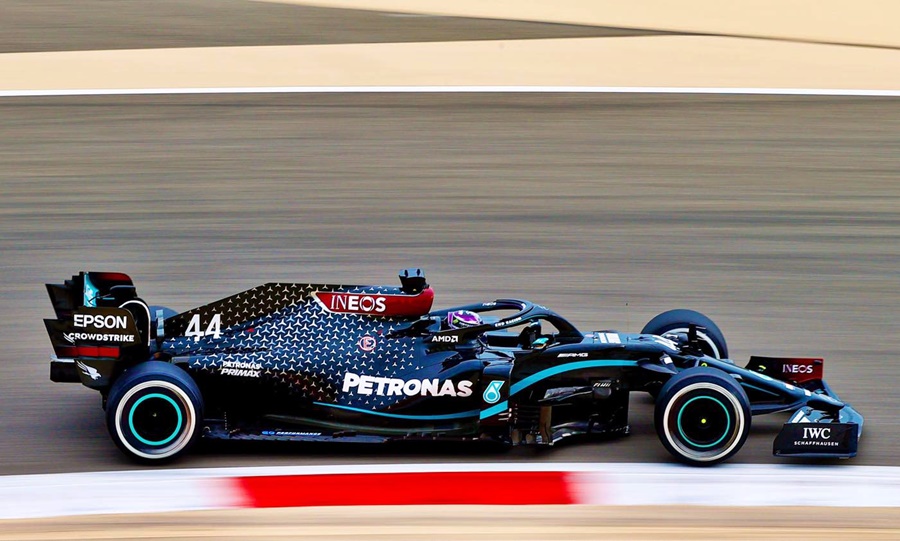 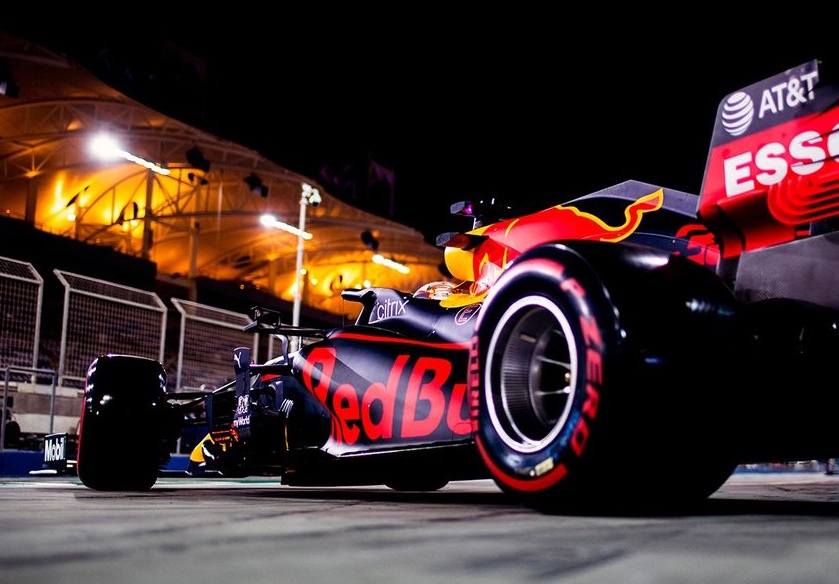 There are a few circuit layouts and for this weekend, the GP Circuit will be used. This has 15 turns and a lap length of 5.412 kms. Regardless of which circuit, the conditions are tough and the surface is highly abrasive. Despite the track’s rural location, surrounded by sandy desert, the sand does not actually present the cars with any major issues and the circuit surface (surrounded by 1,120 palm trees) can clean up very quickly. 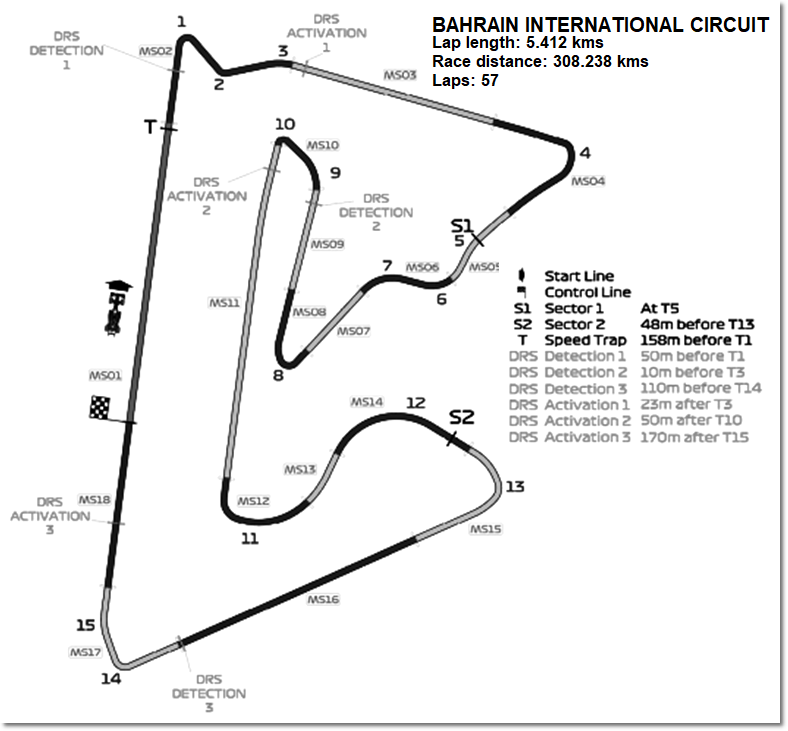 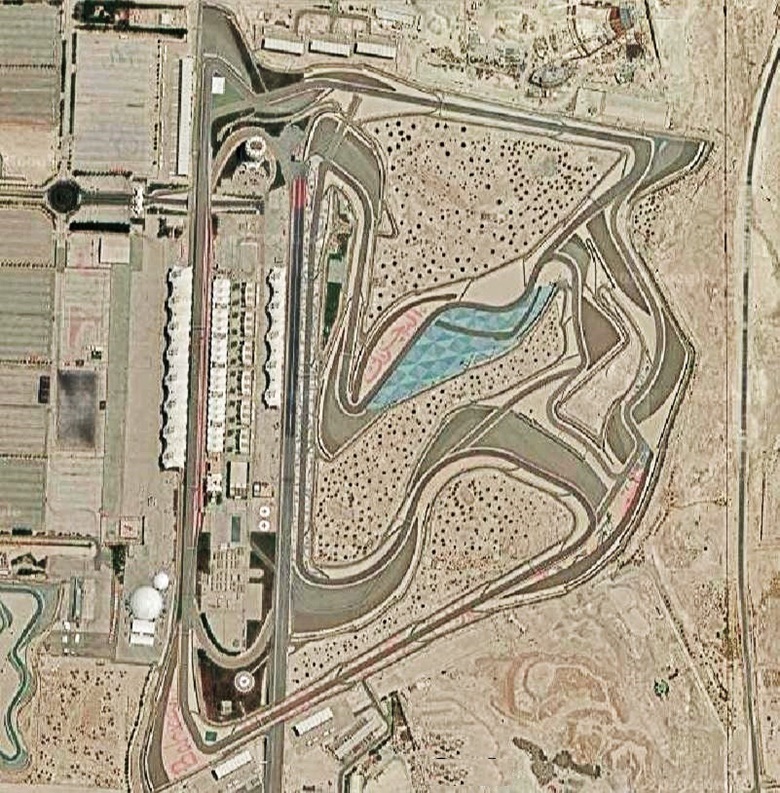 One of the key considerations will be traction coming out of slower corners and protecting the rear tyres. Pirelli is offering the C2, C3 and C4 tyres this weekend at Sakhir, one compound softer than used in 2019 when most drivers opted for a 2-stop strategy.

Turn 10 is one of the trickiest corners because it has a long, combined corner entry that gets tighter towards the apex – which is blind over a crest. Drivers begin to apply the brakes while also negotiating the wide corner arc of Turn 9 and the track drops away at the apex. All of these factors cause the front-left tyre to go light and increase the risk of a lock-up. The balance is on a knife-edge through this sequence, as drivers battle cornering and braking, so you may see mistakes at this point on the track. 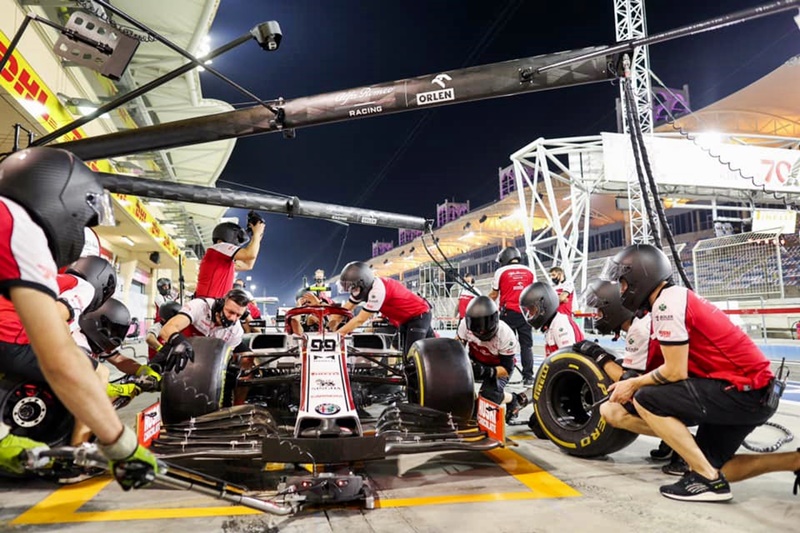 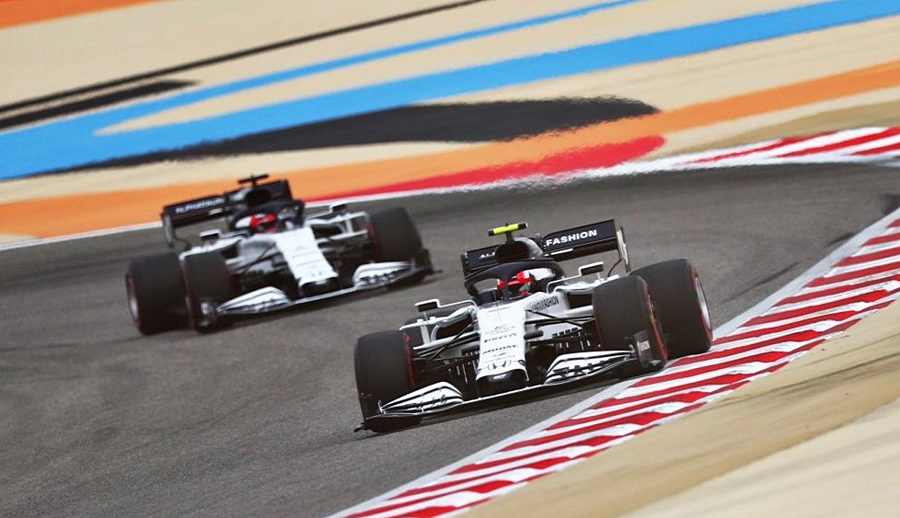 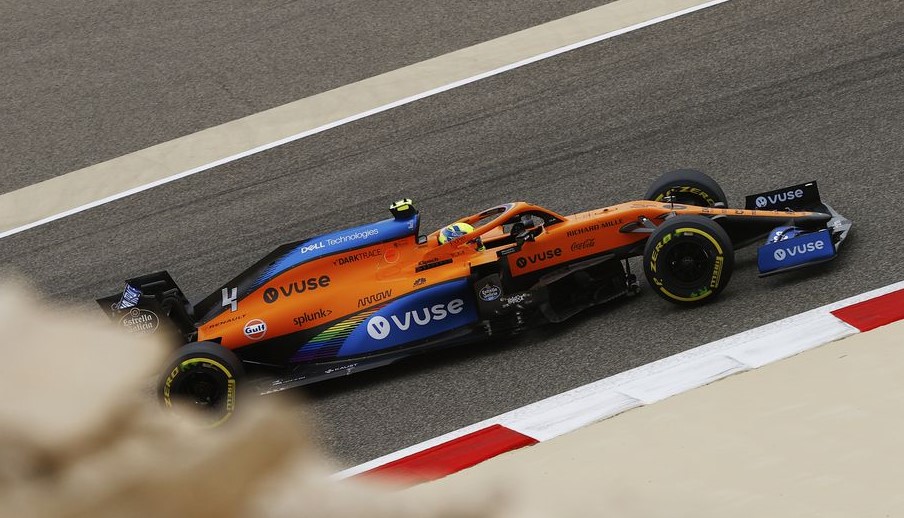 The Bahrain Grand Prix is always punishing on the brakes, with 7 braking events and 3 of those being classified as ‘heavy’ by engineers in the Mercedes-AMG team. Mechanical grip is also an important area in Bahrain, to propel the cars out of the slow turns. This is in stark contrast to the set-up approach for tracks like Silverstone and Mugello, where high-speed corner performance is the priority.

The 57-lap race starts at twilight; as the light dims and temperatures fall to around 26 degrees C., the drivers will be circulating in lighting from 495 posts. Over the projected two hours of the race, they should cover 308 kms, averaging 58 gear-changes on each lap. 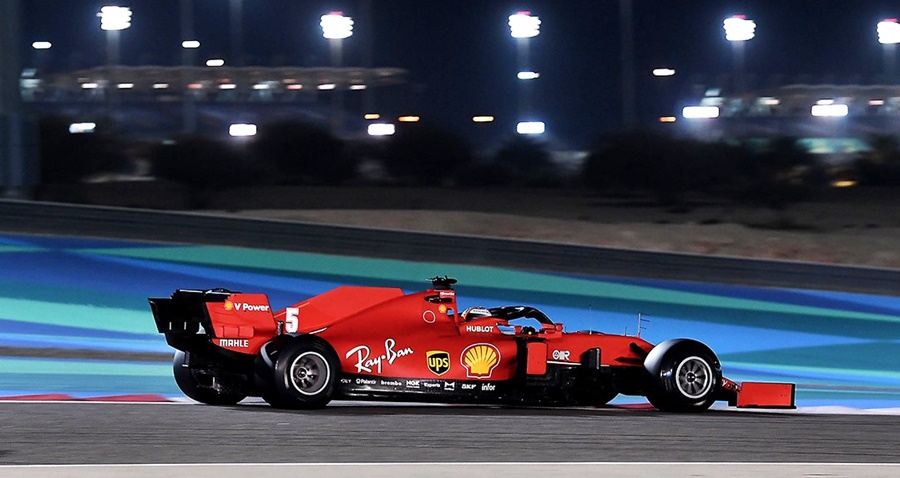 Sebastian Vettel and Ferrari have had the most victories at this circuit, the driver having won 4 times and the team having won 6 times. Lewis Hamilton has won 3 times so a win tomorrow will bring him equal to the German driver. 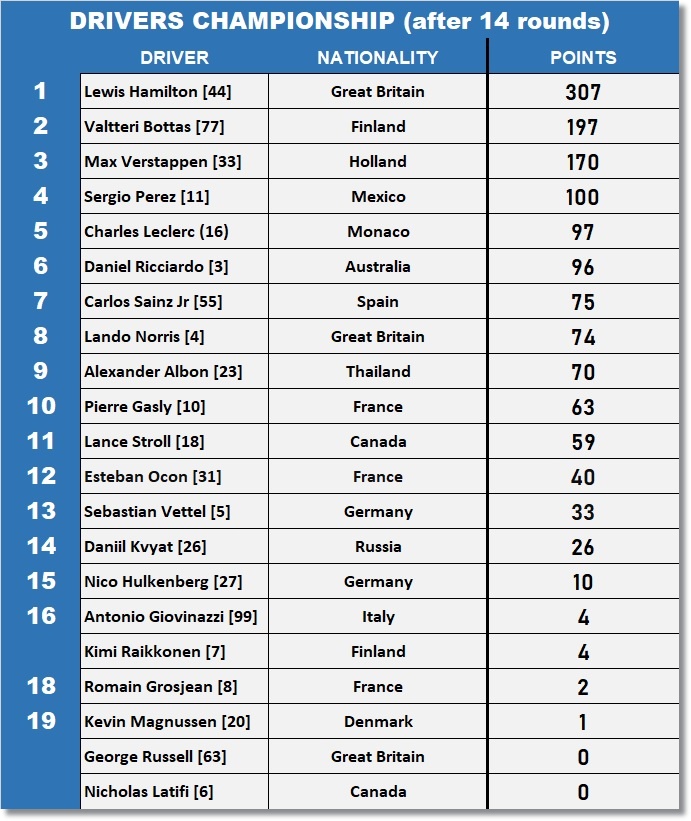 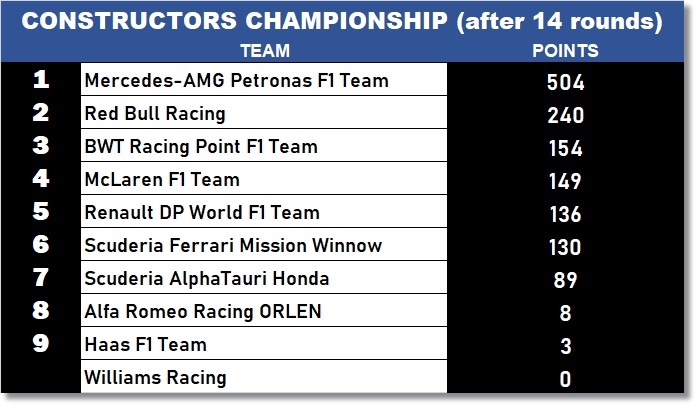 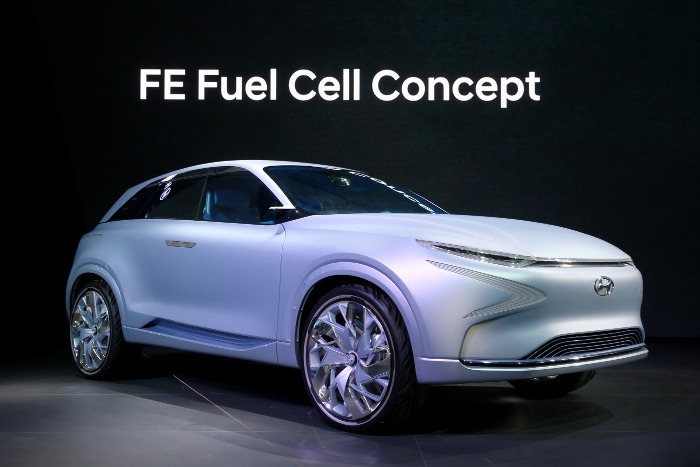 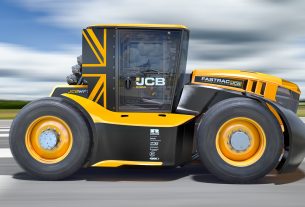 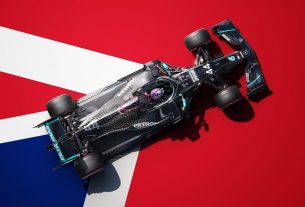 F1 (Round 4): Results and Highlights of the 2020 Formula 1 Pirelli British Grand Prix