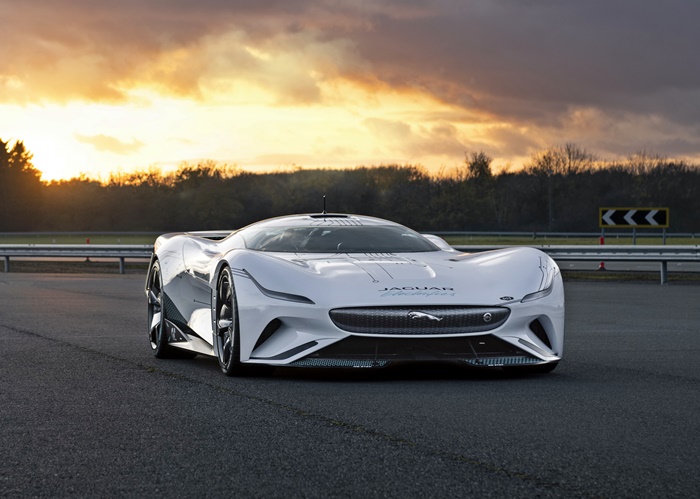 It was an opportunity to re-evaluate everything that could improve performance and in doing so, re-think what an electric Jaguar endurance racing car could be. Fundamental to that process was detailed analysis of gamer feedback from online videos and forums. This ‘virtual world testing’ combined with many hours ‘behind the wheel’ enabled the design and engineering teams to determine exactly how to optimise the Vision GT SV to create the perfect electric gaming endurance racing car. 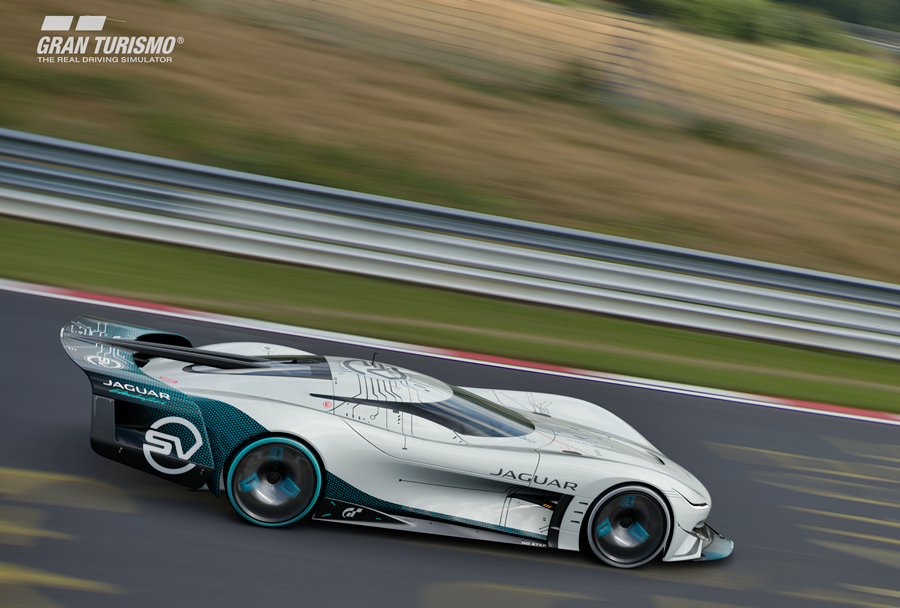 Ultimate gaming endurance racer
“Jaguars created for the racetrack and the road have always shared the same DNA – whether that’s the D-type and XKSS, or the I-PACE and the I-TYPE. So, when the design team behind the Vision GT Coupe were asked to create the ultimate electric gaming endurance racer for Gran Turismo, they worked with engineers from SV and Jaguar Racing to create something really special,” said Julian Thomson, Jaguar’s Design Director.

“The Vision GT SV is a dramatic and visually arresting car which showcases what’s possible when the traditional boundaries governing real-world car design are completely removed. In bringing this car to life with a full-size design study, we’ve been able to showcase the most extreme version of an electric Jaguar racing car that is inspired by the past but looks fearlessly to the future,” he explained. 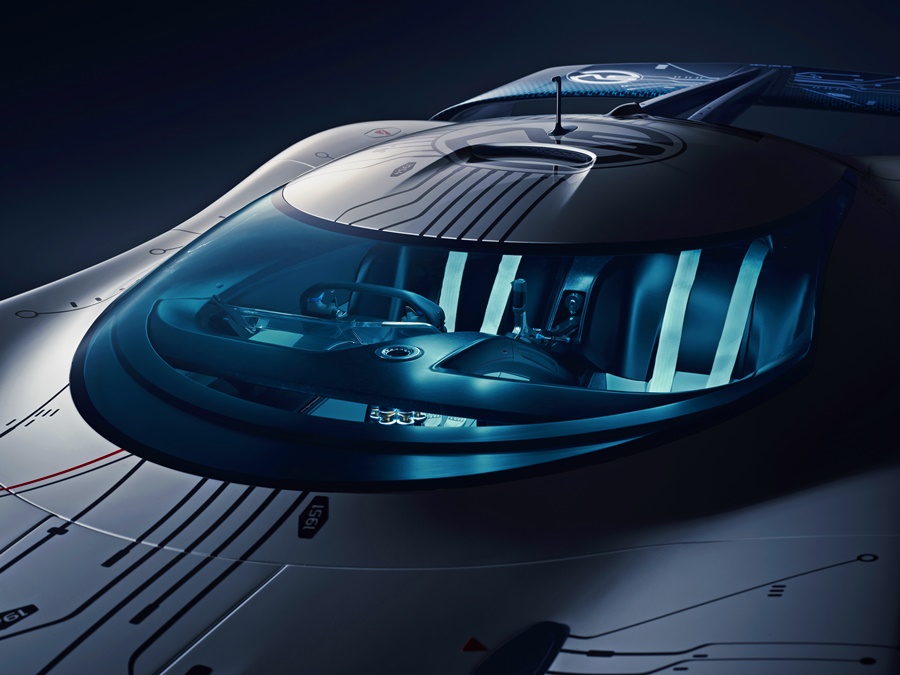 Designed as the ultimate virtual endurance racer, the Vision GT SV pays homage to its illustrious forebears not only in a host of styling and surfacing references but in its unique circuit board livery which nods to milestones such as the Le Mans debuts of the C-type and D-type in 1951 and 1954 respectively.

Engineered by experts
The streamlined, lightweight composite body structure houses 4 Jaguar Racing and SV-designed electric motors (one more than the Coupe), generating a combined output of 1,903 ps/1,400 kW with 3,360 Nm of instant torque. To efficiently and positively transfer all that output to the road is an intelligent all-wheel drive system and torque vectoring. Acceleration from 0 – 60 mph (96 km/h) is said to take just 1.65 seconds, on the way to a maximum speed of 410 km/h. 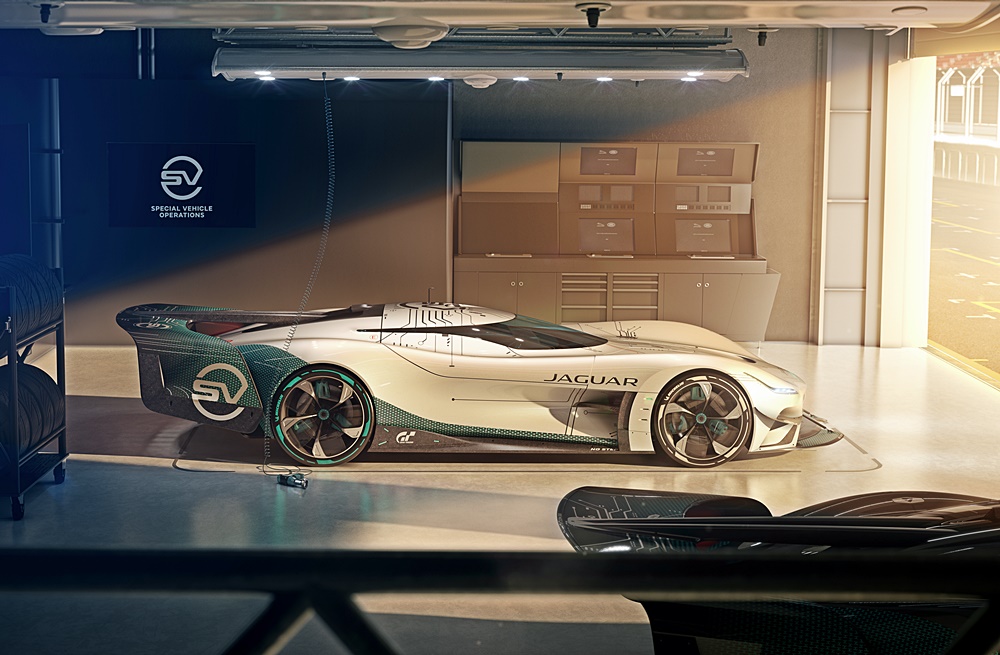 “We were given one objective: take everything that makes the Jaguar Vision GT Coupe so special – the performance, the handling and the soundtrack – and take it to another level,” recalled Jamal Hameedi, Engineering Director for the Jaguar SV. “And the team didn’t just achieve that target – they exceeded it, developing a virtual electric car which really could compete successfully in the extremes of 24-hour endurance racing.”

“Not only that, they were able to see their work in the virtual world, turned into reality with the production of the stunning full-scale model which will no doubt excite gamers about what’s to come in Gran Turismo,” he added. 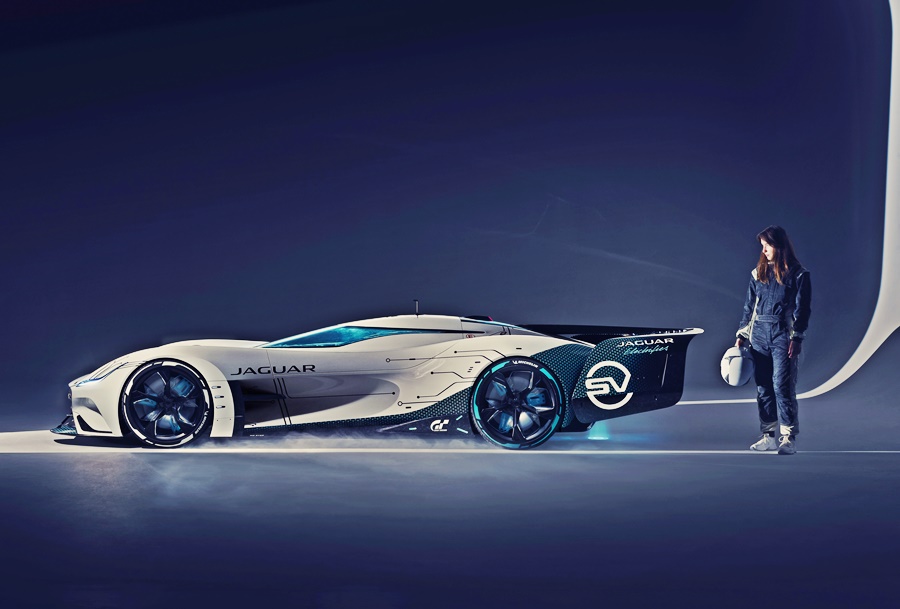 The Vision GT Coupé’s elegant silhouette is still clearly recognisable in the GT SV, including the curvature of the C-type and D-type-inspired fenders, and – even with the additional motor driving the front axle – the wheelbase remains unchanged at 2721 mm.

Measuring 5540 mm from nose to tail, the GT SV is 861 mm longer overall – a change driven entirely by aerodynamics. To deliver the increased downforce needed for greater traction for faster cornering and increased high speed stability on long straights, the GT SV has a new front splitter and a new deployable rear wing. 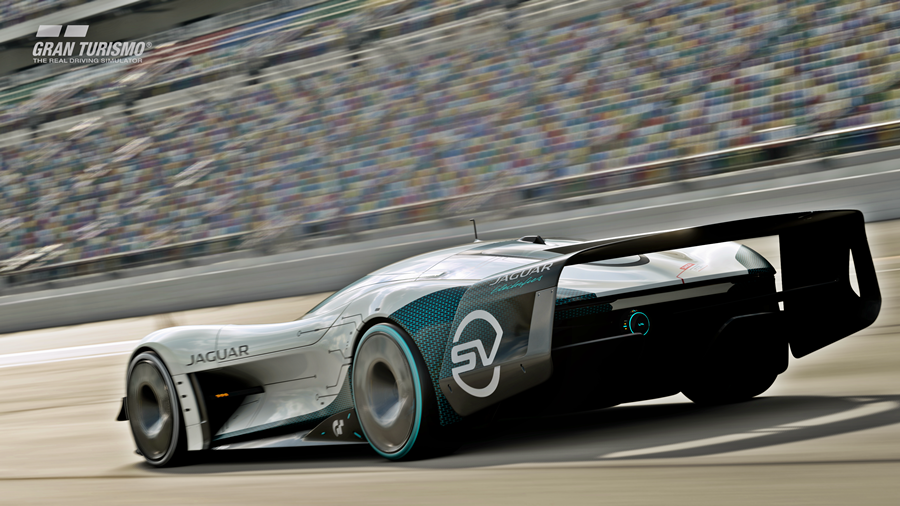 In addition to the larger, more effective splitter – which produces downforce over the front axle – apertures in the front valance channel air across the face of the front wheels to reduce turbulence and help air to flow cleanly towards the rear of the car. Air passing through the wheel wells is also smoothed towards the rear via exit vents in the fenders.

The completely enclosed, sculpted underbody – which includes a keel element behind the front axle to aid high-speed stability – accelerates airflow, reducing its pressure and therefore helping to reduce lift, before it exits at the rear via a large venturi. 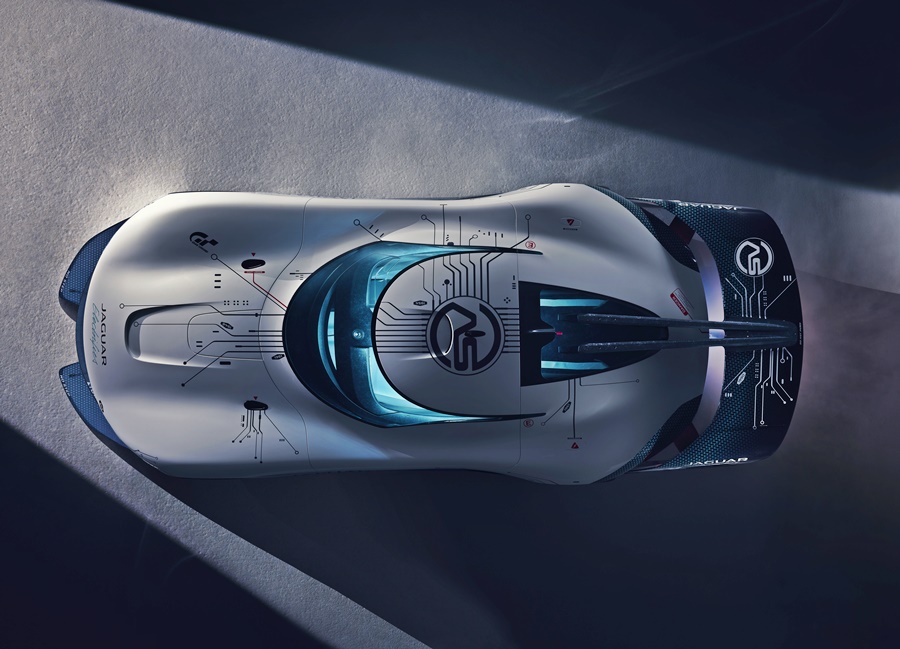 Deployable rear wing
The single most effective aero feature developed for the GT SV is its deployable rear wing, inspired by endurance racing cars from Jaguar’s past, including the XJR-14. Meticulously developed from concept to final design through many iterations, the wing’s main, fixed, section wraps over and around the back of the car, blending smoothly into the rear haunches.

The wing is designed as an integral element of the sculpted bodywork while also providing the aerodynamic performance required for endurance racing: two moveable sections automatically rise at speed to deliver extra downforce when needed but drop back to their nominal positions to minimise drag. 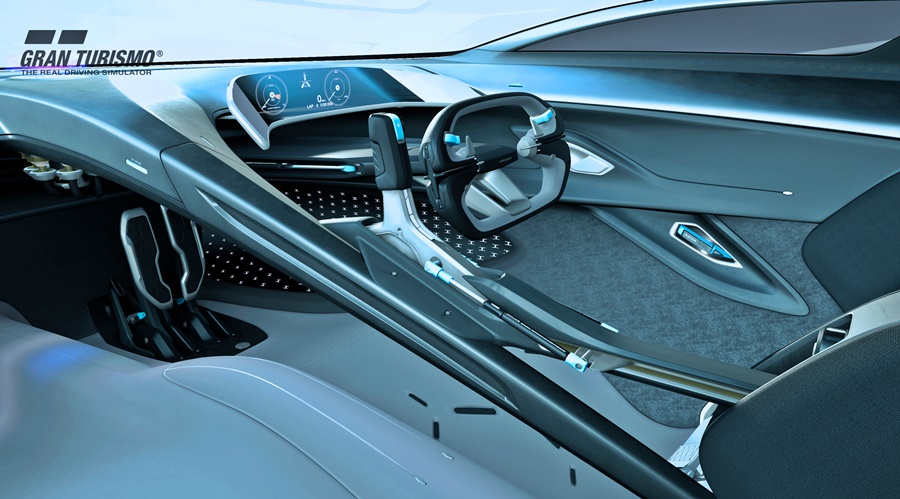 Jaguar Racing engineers developed the GT SV’s quad-motor all-electric propulsion system. They also designed the system for the first Jaguar Vision GT car, applying all of their knowledge and experience from developing the Jaguar I-TYPE over 6 successive seasons.

Power comes from a state-of-the-art lithium-ion battery pack which is housed low down in the light, stiff body structure, delivering a low centre of gravity, a low roll centre and near-perfect weight distribution.

The thermal management system is enhanced by an additional liquid nitrogen circuit which provides extra capacity to enable the battery to provide maximum power for longer while remaining within its ideal temperature range. The nitrogen cooling is also linked to the boost button within the cabin to ensure that even during the most demanding operating conditions the battery will not exceed its upper temperature limit. 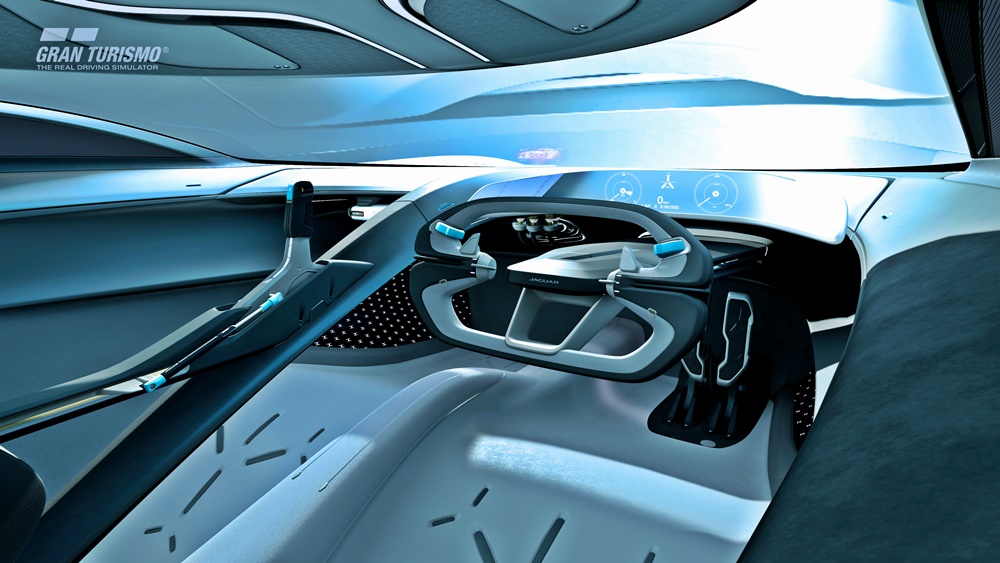 Ultimate virtual driving experience
The unique, powertrain soundscape so fundamental to the visceral driving experience of the Vision GT Coupe has been further enhanced for the GT SV version. Reflecting the increase in power and torque from the 4 electric motors to its precursor’s three, the GT SV generates a sound that is even more purposeful and distinctive, and is authentically yet futuristically Jaguar. Building to a crescendo at the 40,000 rpm redline, it reflects the GT SV’s true racing DNA and delivers unrivalled driver reward. 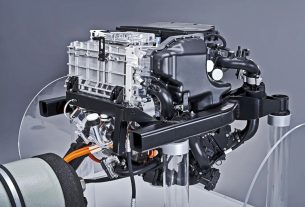 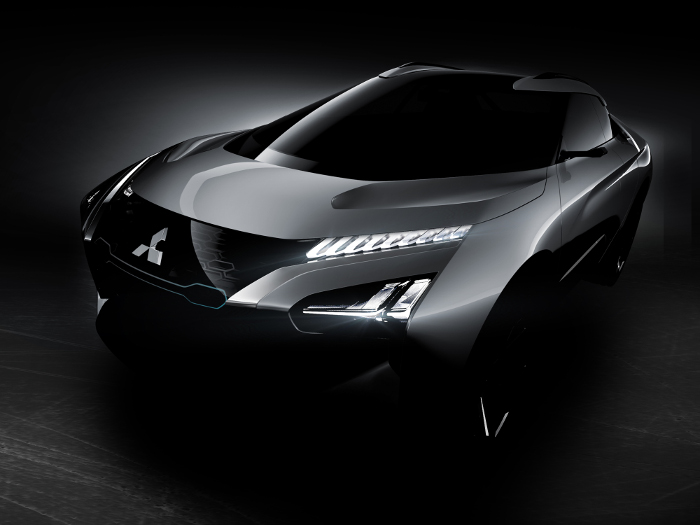 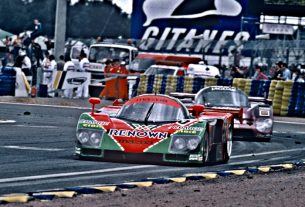 Mazda at 100: Proving superior and reliable engineering through motorsports