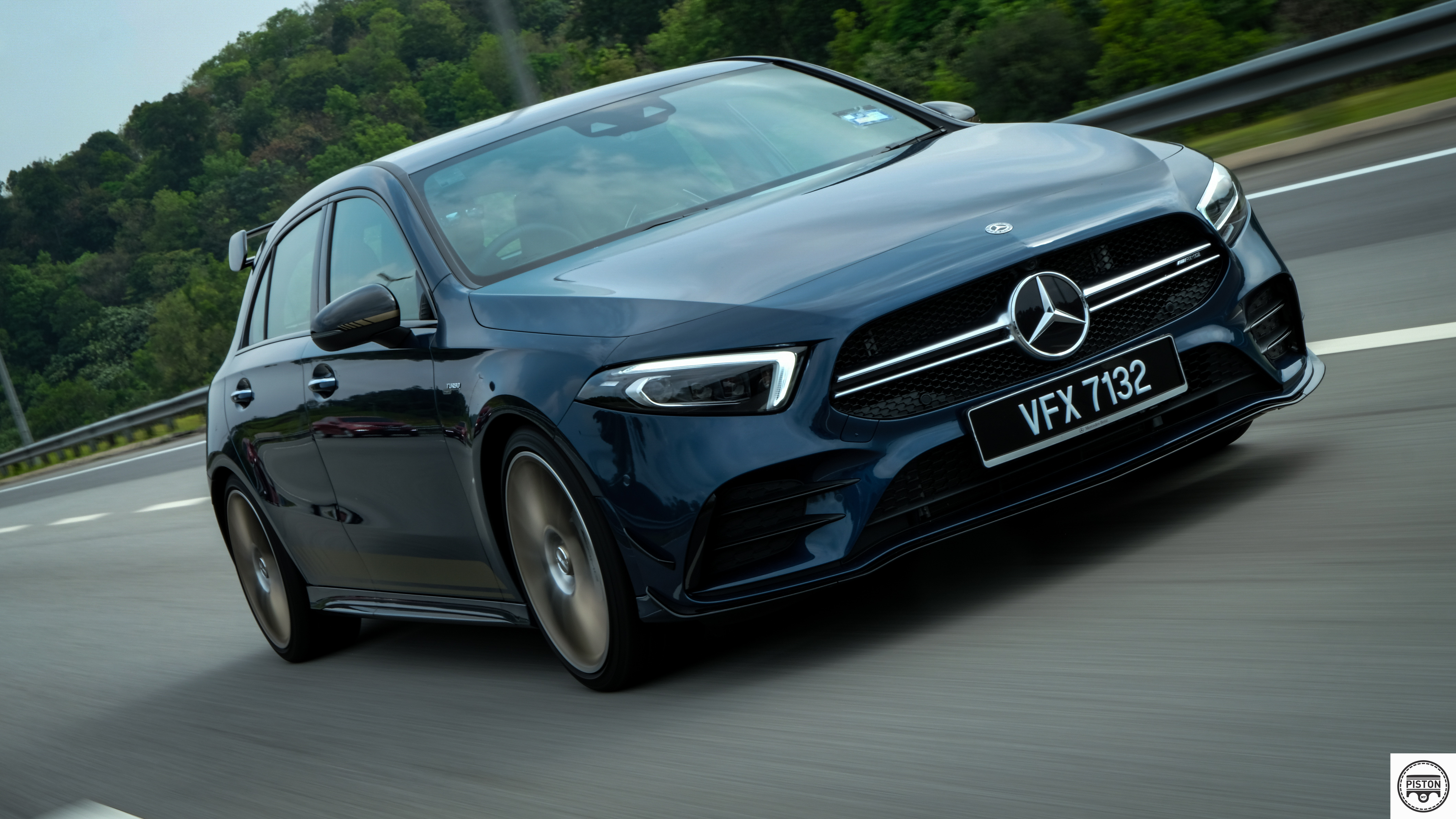 What would you do with RM367,000? Some, if not most people could do quite a lot with all that money.

Some may invest the money in properties for future returns, some may pay off debts, some will help their families while others may start a business. 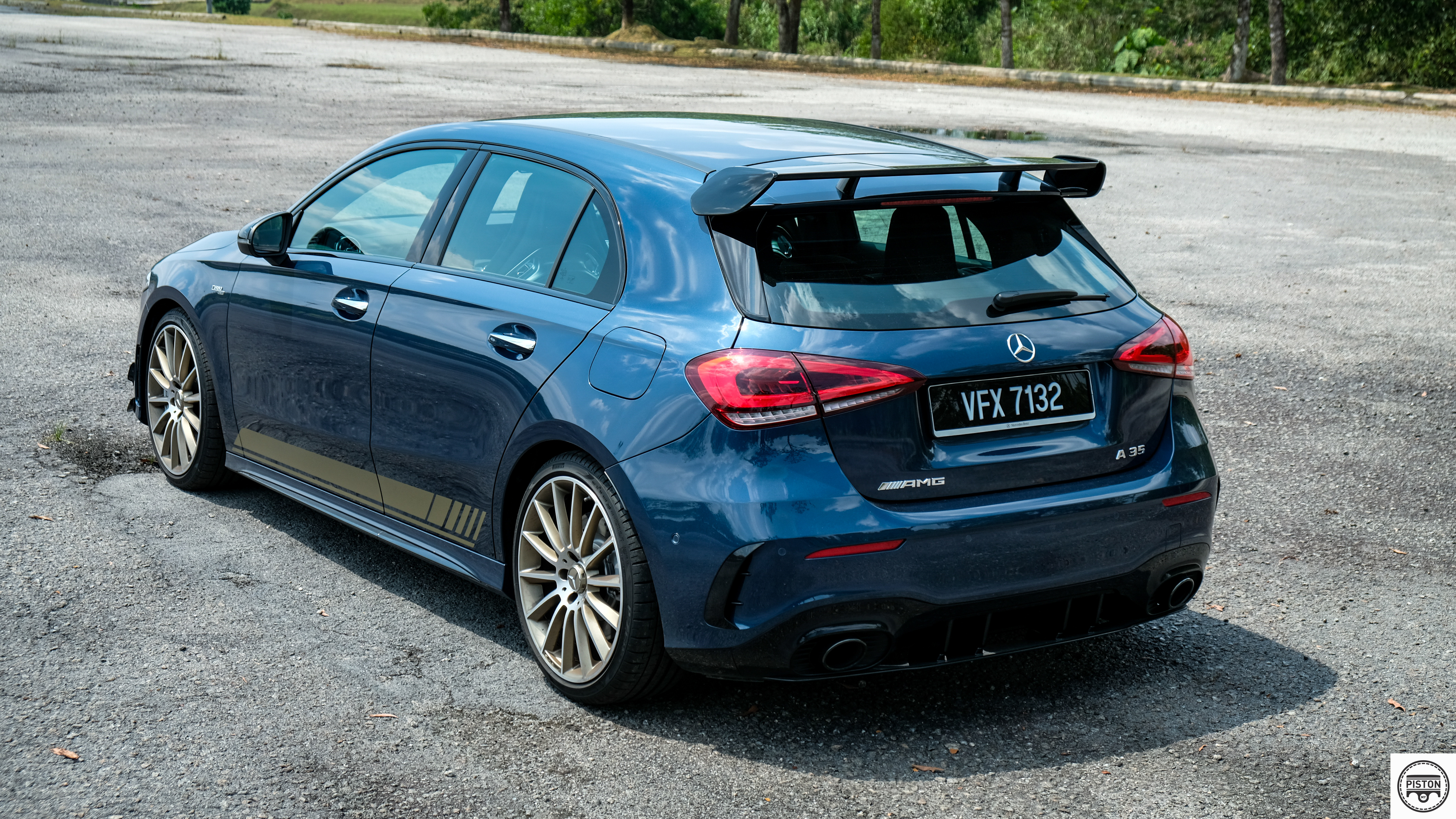 But let’s assume you have it all already. There is nothing else you could want and there’s lots of spare change in the bank. Lets then talk about spending your money on a Mercedes-Benz A35 AMG – a super hot hatch that costs an eye watering RM367,000, which undoubtedly is a lot of money for an A-Class.

Imagine for a second that the most basic A-Class costs just RM220,000. An A35 AMG costs a whopping RM147,000 more. And what you get are some go faster bits, a trick sports suspension and chassis, and a highly tuned engine that is the same as the one powering the A250. 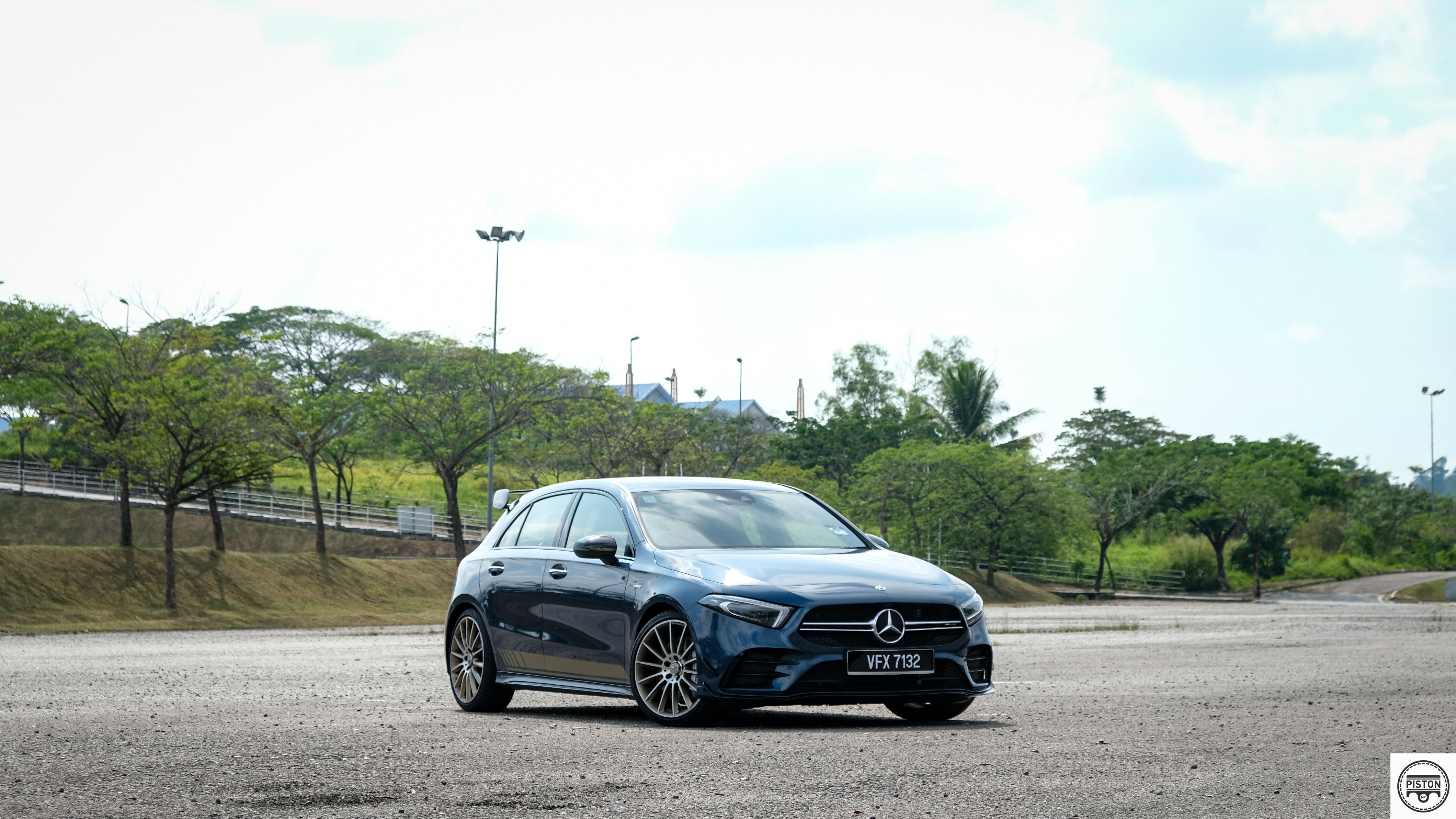 You could also argue that the A35 AMG is an entirely different breed of car than the A200, and you won’t be wrong. But the question here is, is it worth the money? Or shouldn’t you bother and jump right into the full-blown A45S AMG instead?

So why did Mercedes build it then?

And they weren’t wrong because it just makes perfect sense – price wise at least. 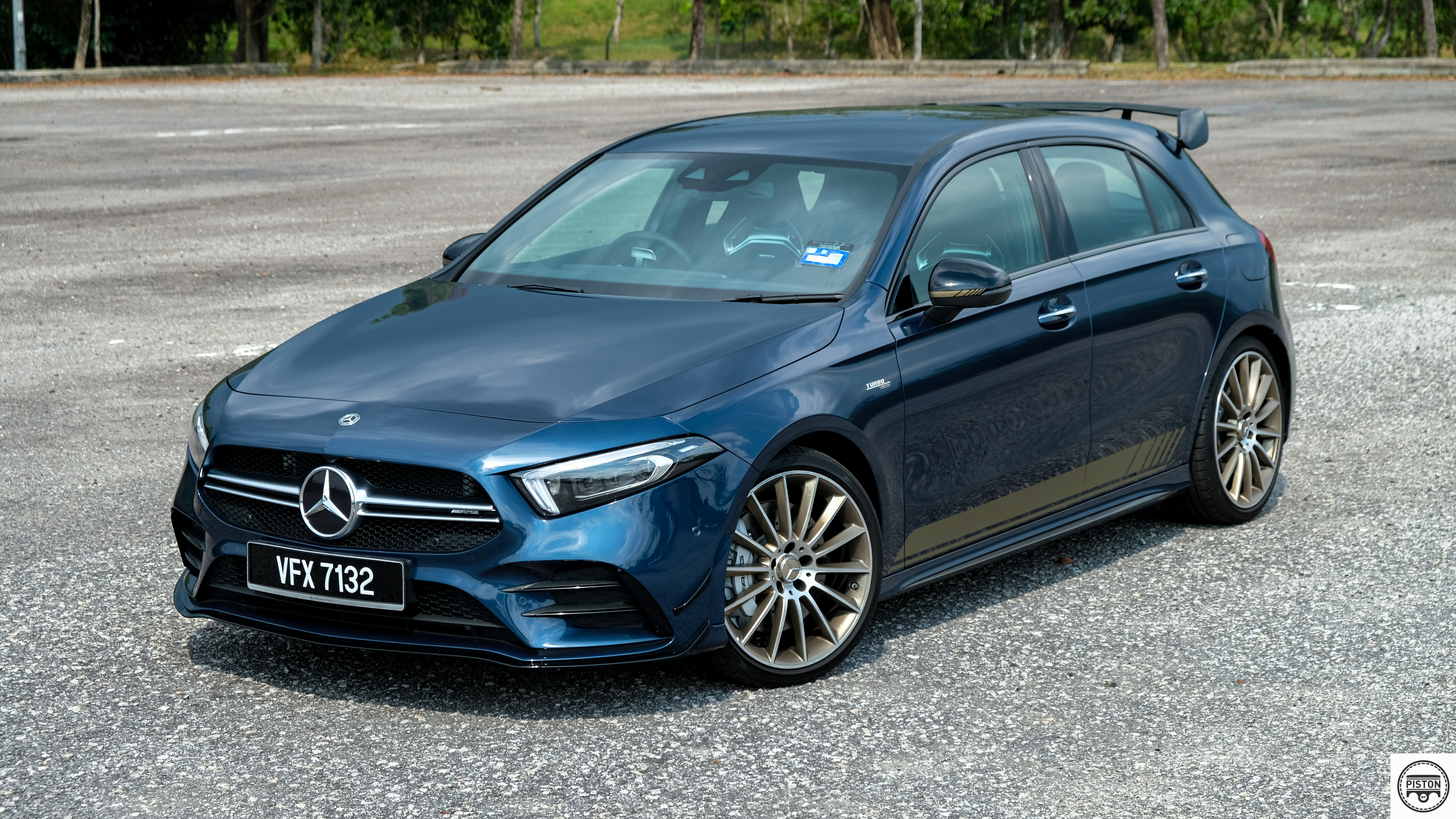 Other than sheer driving fun and bullying Volkswagens and Honda Type-R’s on the road, an A-Class that costs as much as a new condominium simply does not make sense, to regular wage-earning people at least.

But the A35 AMG is not meant for regular people, it is meant for those with deep pockets who like to drive hard and don’t mind suspension so stiff that it makes your nose feel like its about to fall off your face.

Simply put, it is meant for those who like their cars to have a naughty edge with no regard for comfort whatsoever.

What’s it like to be inside the A35 AMG and can you drive it like a proper civilised citizen?

If it were not for the seats, the steering wheel, the aluminium pedal shifters, and the awkward AMG strips around the left of the dash, it would feel like a typical A-Class inside. 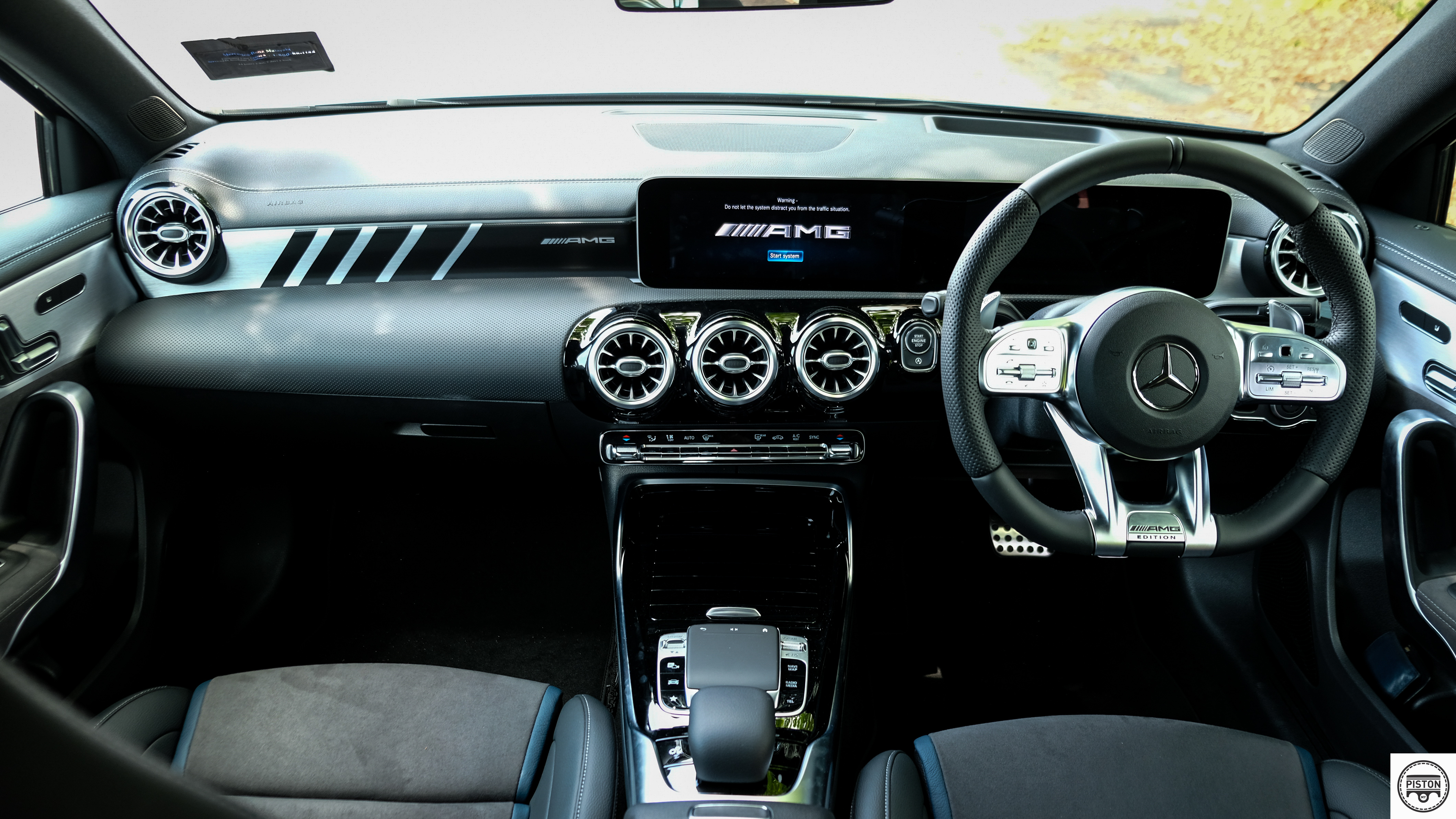 But because everything mentioned above exists inside the A35 AMG, it makes the interior feel more purposeful when you first take a seat. Especially the seats that not only look great but also feel great as well. But because they are so thinly padded, they would be quite uncomfortable over long distances.

And unlike the first generation AMG seats where all controls were placed on the side of the seats, you actually have to delve quite deep into the electronic menu to adjust things like side bolstering and lumbar support. We found those settings once when we first picked up the car, but could not find it again as the menu was just too complicated, so we didn’t bother. Perhaps we should have spent a bit more time fiddling around the menu than driving the car. 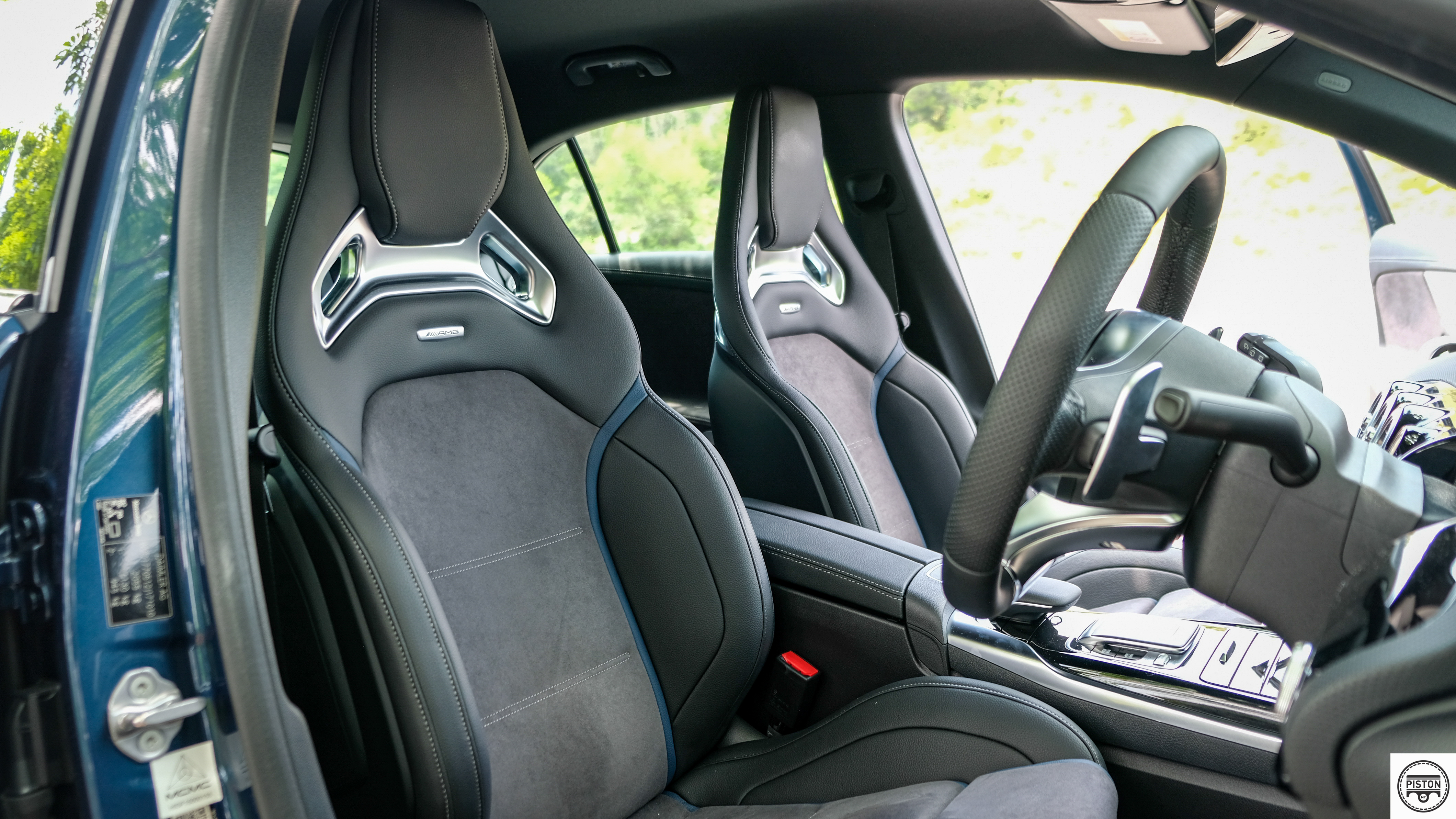 Other than that though, driving the A35 AMG is as fun an occasion as driving a hot hatch gets.

But because of its racer-boy like suspension character, it results in an uncomfortable sitting position. Even in Comfort mode. Roll over a hump and you will notice it immediately. It does not bother soaking it up, instead simply transfers it to the passenger cabin and tells you to deal with it.

You feel every imperfection in the road, every dip and every bump that comes your way.

Not only do you feel everything in the cabin, but also in your bum as the seats make no effort to absorb anything either. 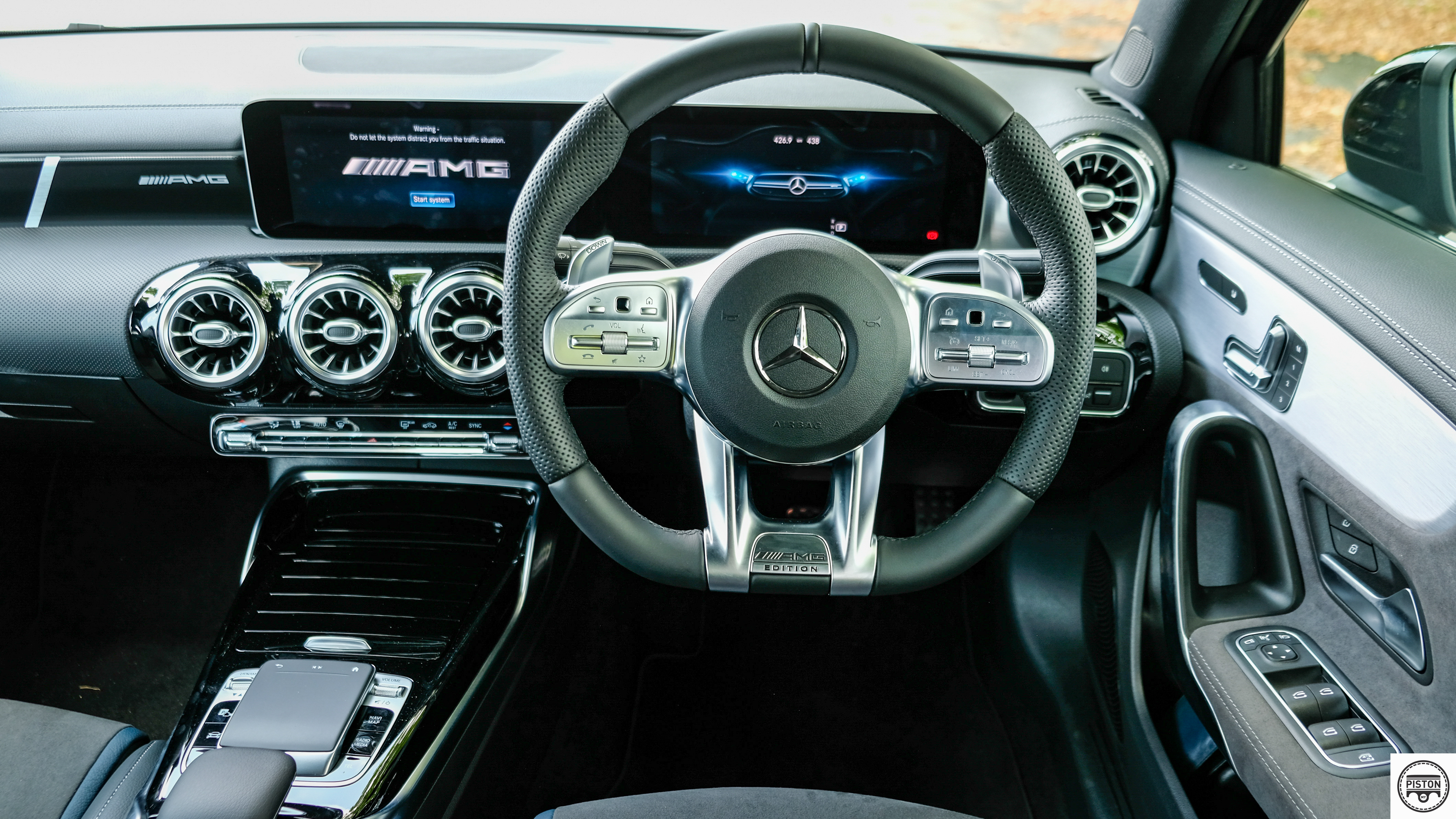 But as soon as you select Sport or Sport Plus mode, the car takes on a very different, livewire-ish character, like it has suddenly guzzled down about half a dozen cans of Red Bull and wants to take on a fight with every single car on the road. It also somehow wrings out the horns from the temples of your head, and makes you do things on the road you would otherwise never imagine.

This is the true nature of the A35 AMG, the sports mode – where everything about the car is at its finest. 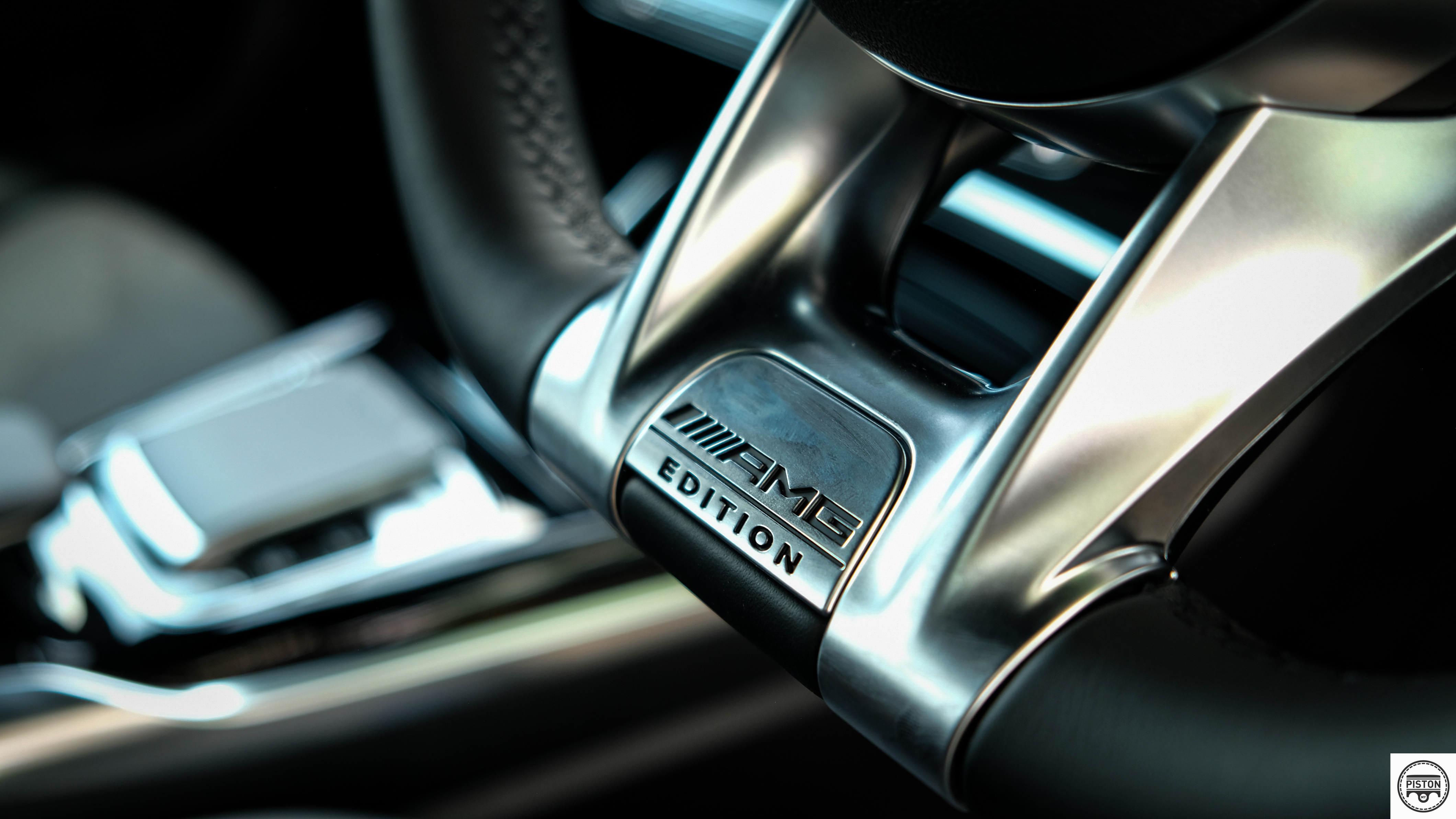 But there is a docile side to the car too, this does not mean that it can also turn into a pot-hole absorbing S-Class, but it can actually be a quiet sanctuary after a long hard days of work. Though that may not happen a lot.

So can you drive it like a proper civilised citizen? Sure. Till you see the next fast corner, which makes you want to take it on pedal to the metal.

Enough with the whining about comfort and suspension, how’s it like to drive hard?

It may be uncomfortable, cramped (though roomier than the previous A-Class), noisy because there’s a lot of road noise intruding into the cabin noise rather than the sweet sound of a turbocharged four-pot.

But as far as a hot-hatch goes, the A35 is simply brilliant. 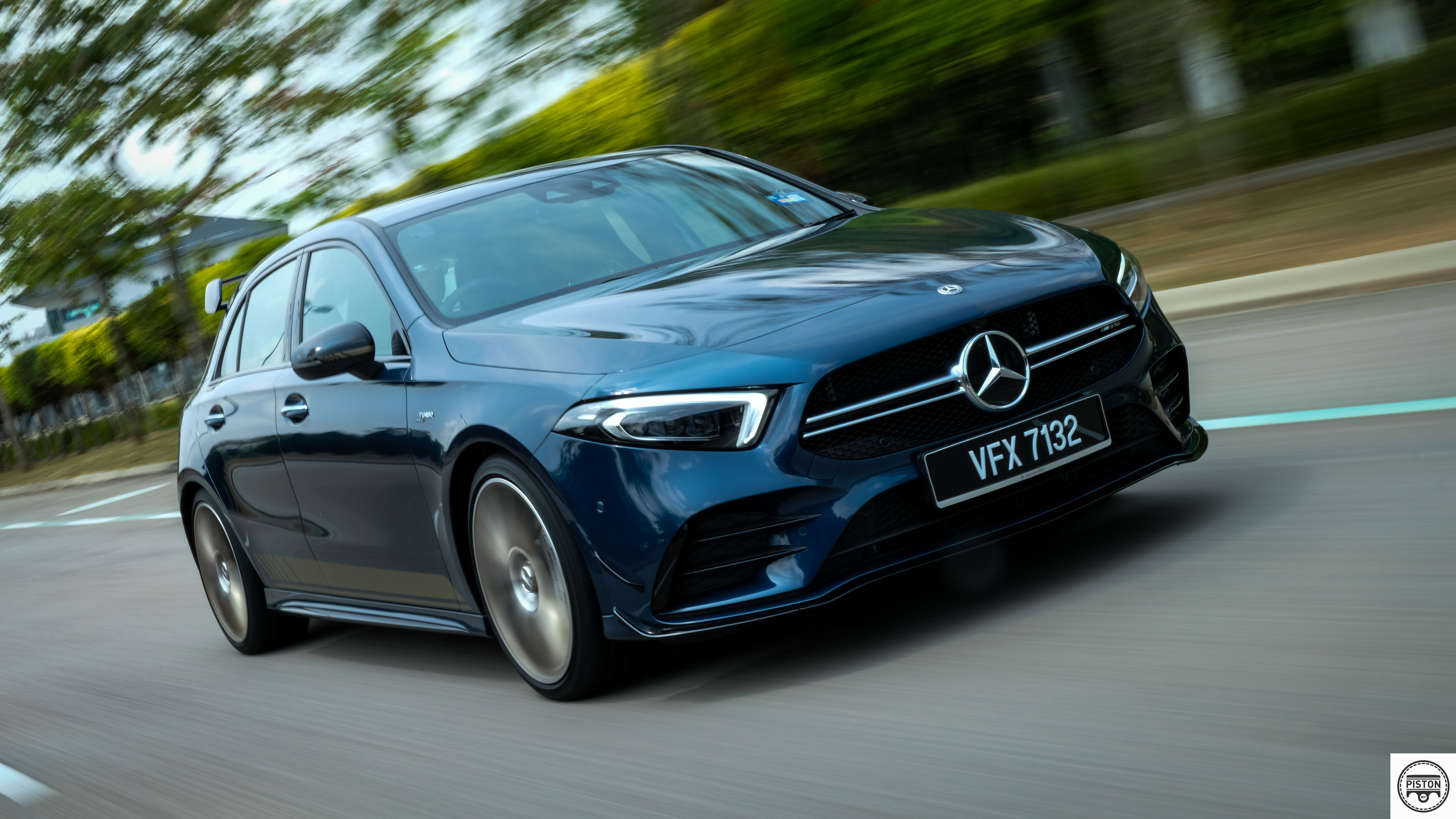 It is terribly stiff (read: uncomfortable) when going around your daily business because of how the suspension and chassis has been set up and all the stiff mountings rather than rubber bushings. But find a good stretch of winding road and floor it and the A35 AMG is immediately in its element.

The handling is pin point accurate, the steering rack too is direct mounted to the body, so that means there is no delay during change of direction. The car turns immediately when you tell it to. Even the slightest steering input is picked up by the body and the wheels. But the A35 seems to love being abused, it is as if being abused is what it was born to do. 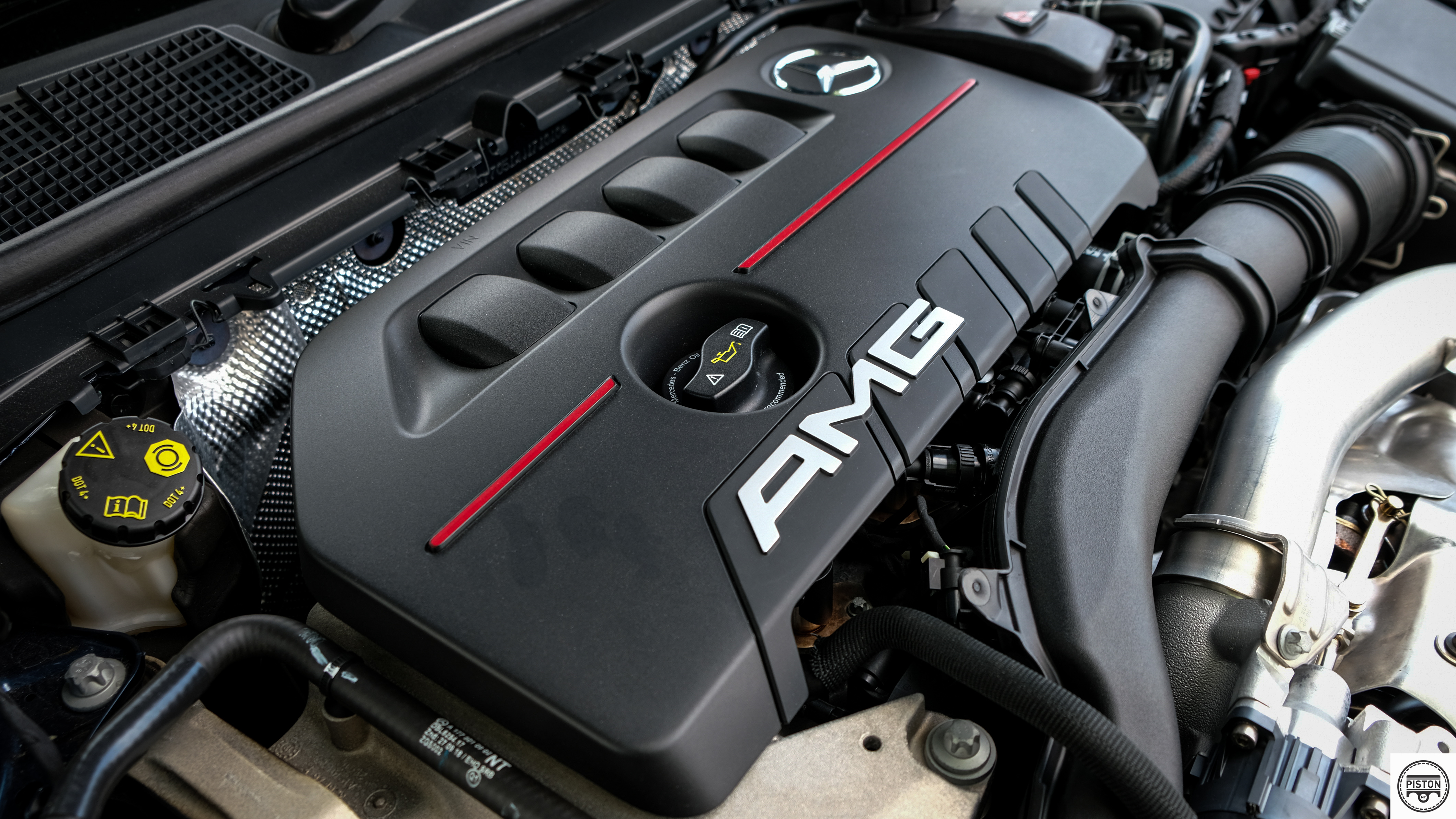 There are five different drive settings for you to work with – Slippery, Individual, Comfort, Sport and Sport Plus – and each mode adjusts the character of the car according to what its name suggests.

Start up the car and there is little audible hint of what lays under the bonnet.

Floor the pedal and you have to wait about half a second or so for the car to figure out what you are asking of it.

But after that, it lays down power to all four-wheels while gently pushing you back into the seats. Power delivery is not explosive like that of the A45, this is after all the lesser sibling of the Mercedes 45 range, but it is still an onslaught to the senses. 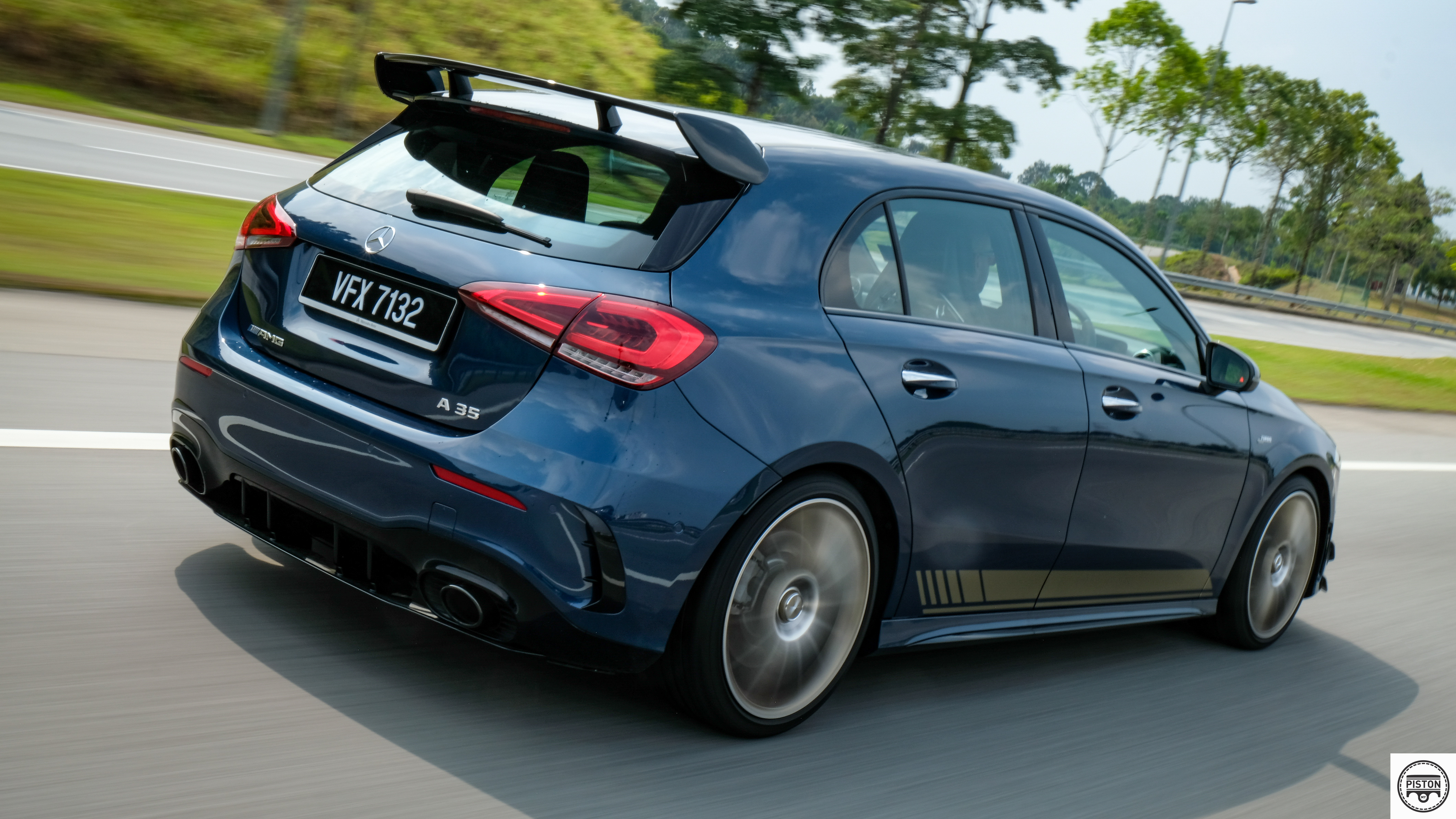 The steering wheel lightens just a tad bit during acceleration before finding its heft again, this is possibly from the car squatting during launch. But after that, it lays down the gauntlet corner after corner.

Grip is immense and it never seems to run out of it. The Pirelli tyres play a huge role of course, but it is the AMG Performance 4MATIC all-wheel-drive system that is the real star of the Grip Show here.

The system features an electromechanical multiple-disc clutch that manages grip between all-four tyres, sending grip to front or rear axle even before you know it. That is where the difference lays between the all-wheel-drive systems of the A35 and the A45S. 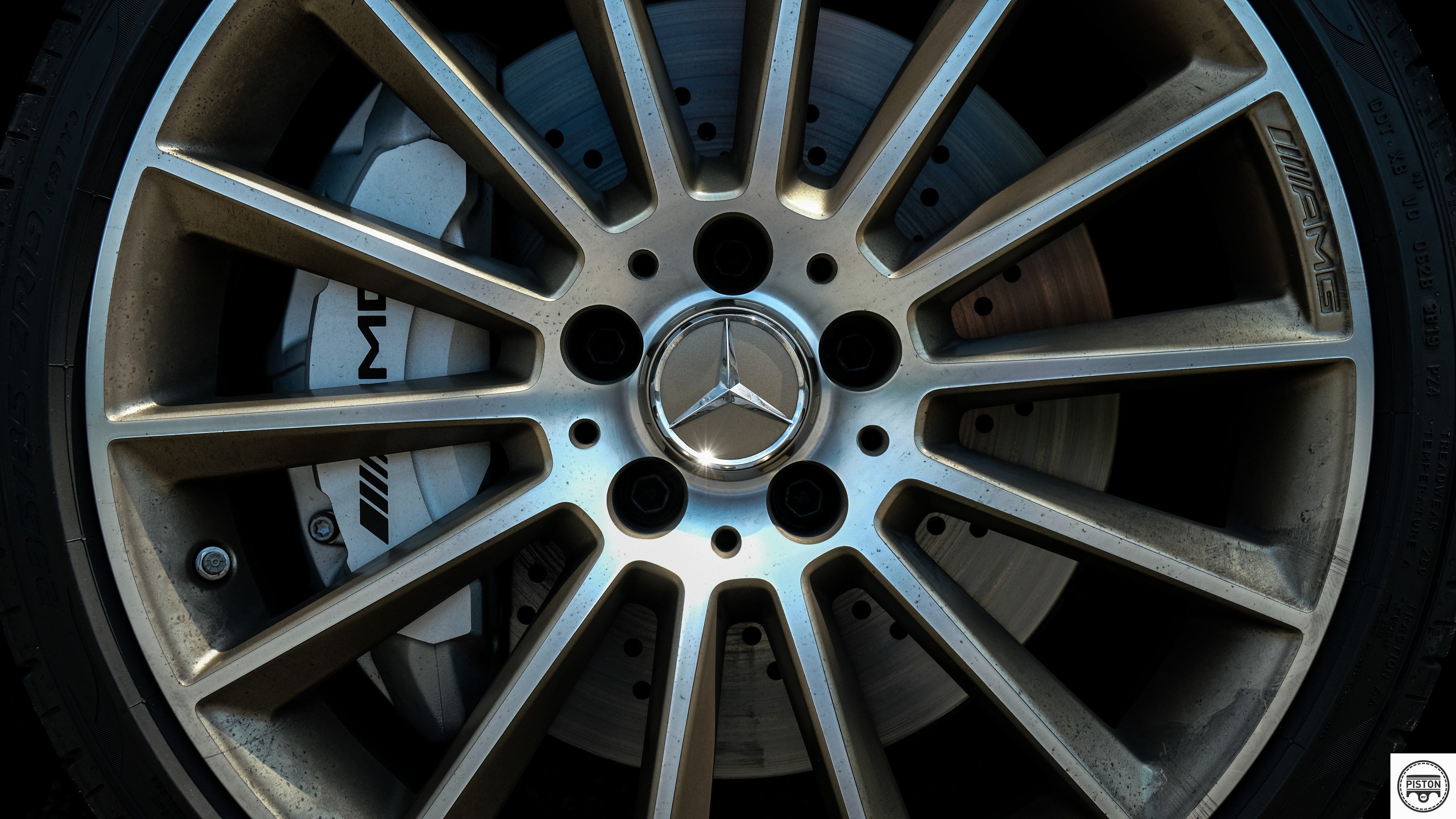 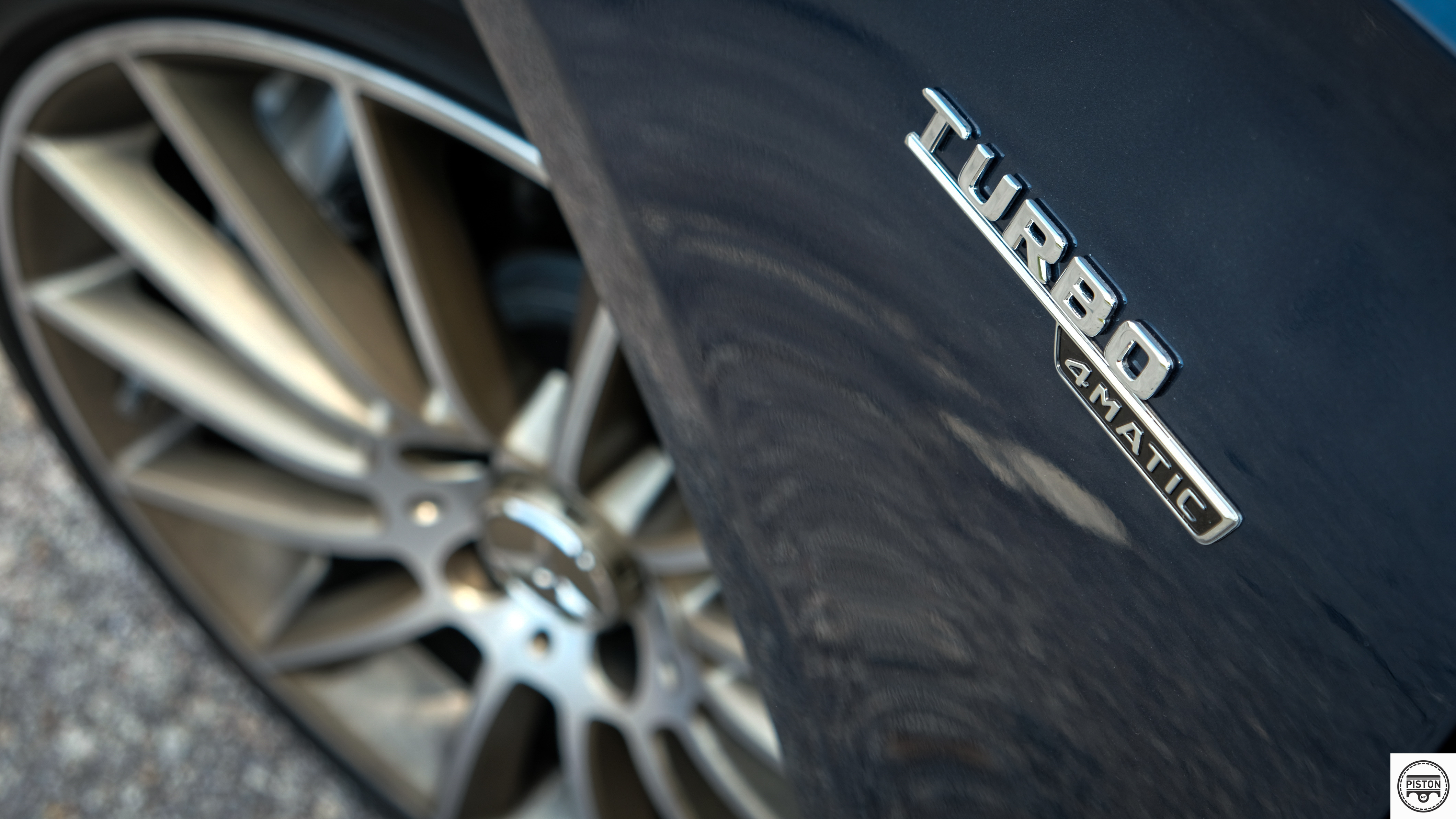 But even so, the A35 feels very quick around corners, and always feels more confident in a corner than you are. 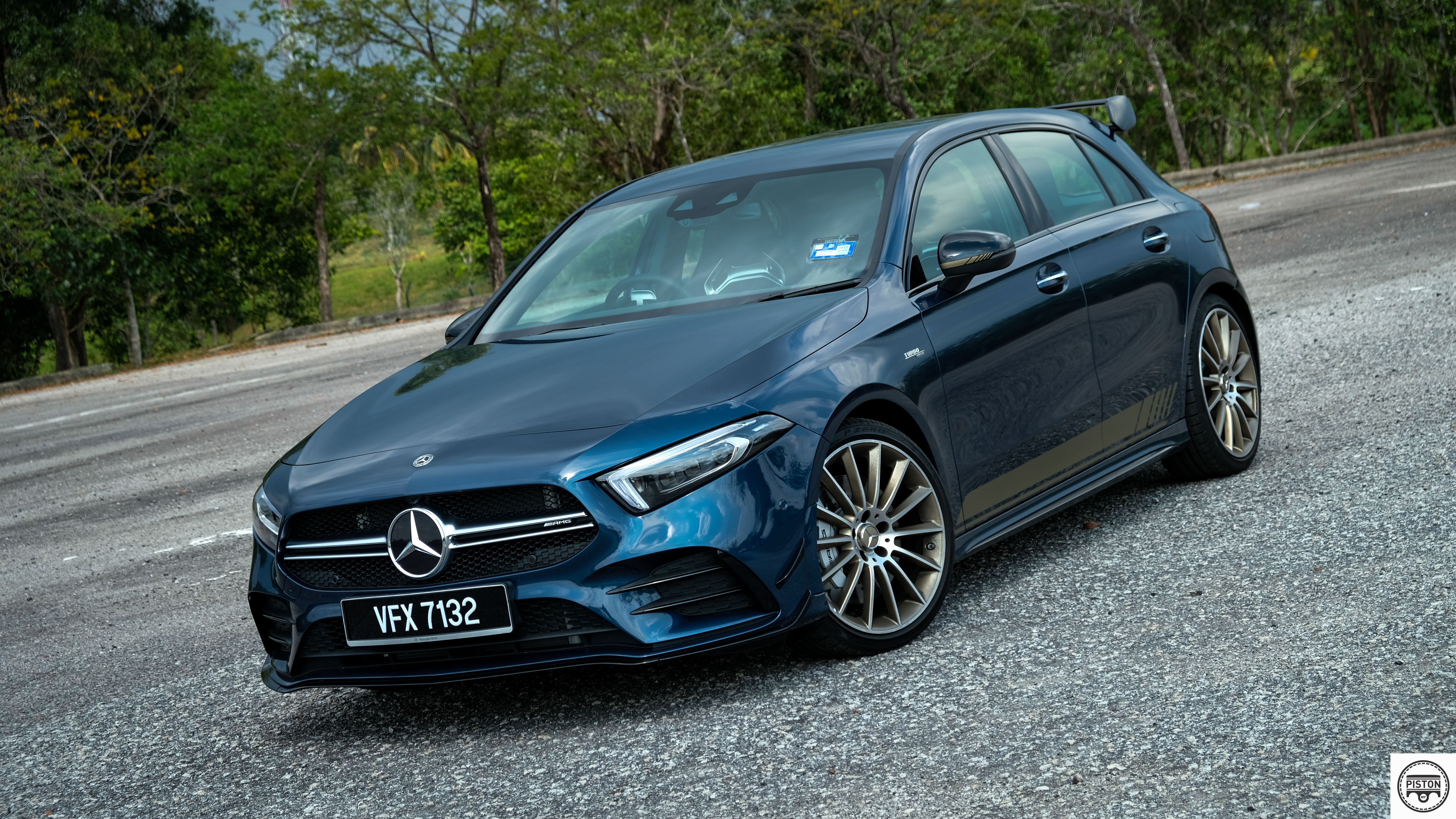 Should you buy it if you had the money?

Silly question by the editor. Of course you would buy it if you had the money. What else would you buy? A Golf R? Come on, that is so 2010. And hasn’t that been rendered irrelevant ever since the first A45 showed up back in 2013? A Civic Type-R? Brilliantly engaging car and undoubtedly fun to drive, but the A35 AMG will be two car lengths ahead in two flicks of the right shifter pedal.

If money is no object then you should buy it. Just don’t expect it to be very comfortable or perfect for that matter. 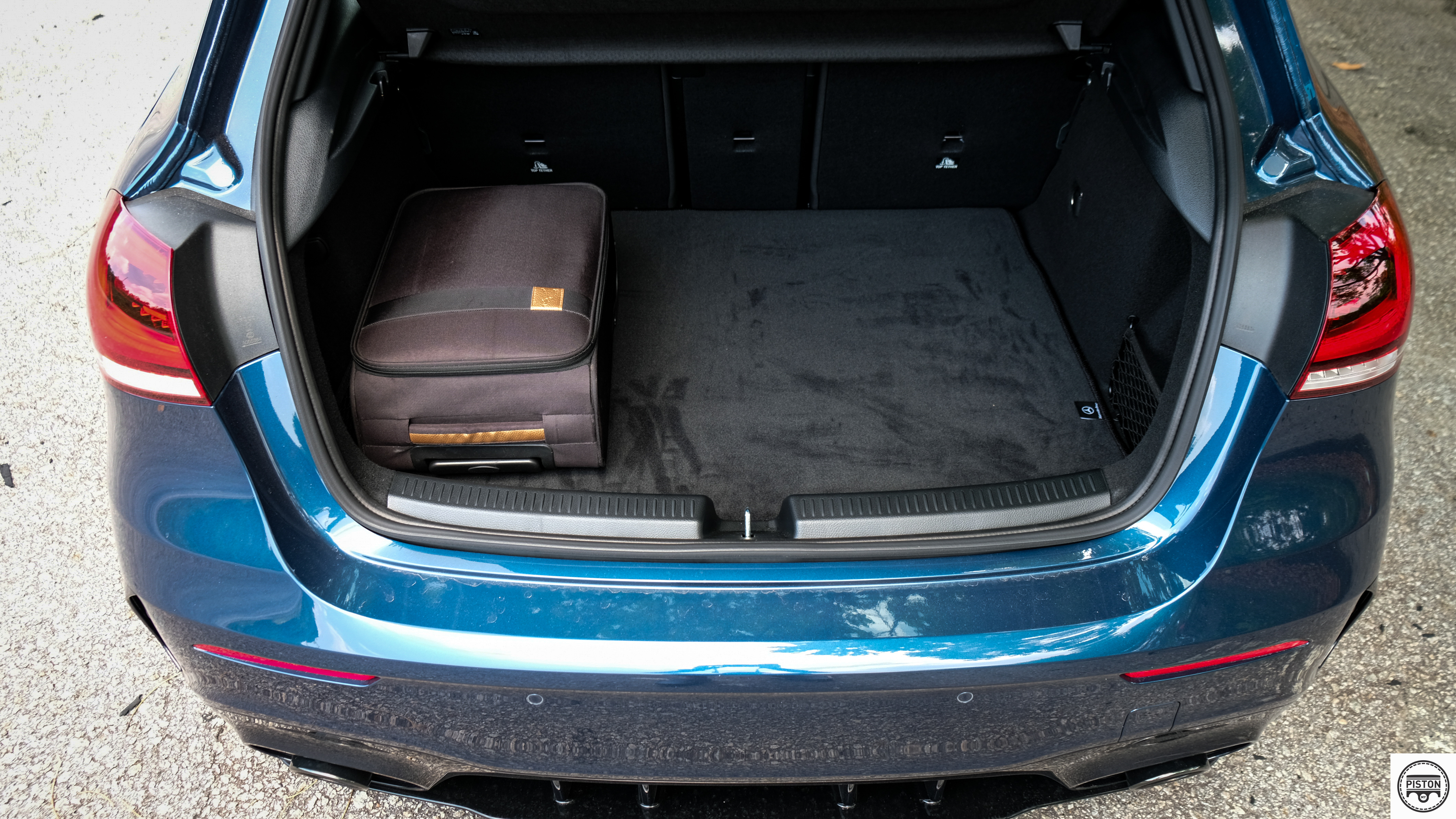 My kid’s stroller could fit in the booth and not much else, so practicality is out of the window as well.

But who cares about that when you have 306hp under your right foot, sport suspension and one of the most advanced all-wheel-drive systems, ever. 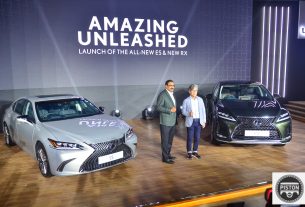 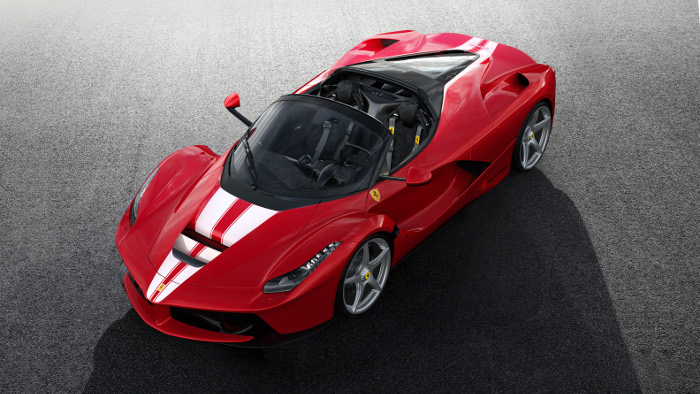 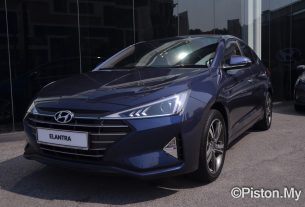