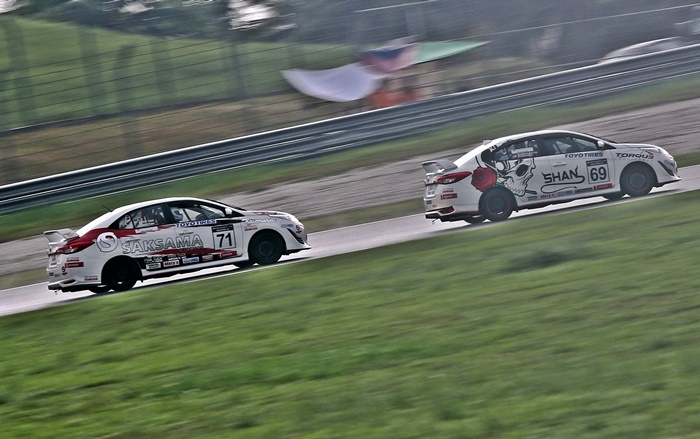 When the pandemic hit last year and brought things to near-standstill, motorsports activities were suspended as such events typically have huge crowds which are a definite no-no these days as they can promote the spread of the coronavirus. No one knew just how long the situation would last and motorsports organisers kept praying that things would ease so they could run some events.

At UMW Toyota Motor (UMWT), even though the final round of Season 3 of the TOYOTA GAZOO Racing (TGR) Festival had to be cancelled, there was optimism that the pandemic could not go on ‘forever’. And although Season 4 could not start off around the usual time in the third quarter of the year, planning was still done with a hope that eventually, the new season could be run.

The company even decided to use the ‘downtime’ to train a group of young men who excelled in karting and sim racing (or eSports). They were recruited for the GAZOO Racing Young Talent Development Program where they would not just receive professional training – physically and mentally – but also have cars to use during the Vios Challenge. The new Rookie Class would complement the hugely popular Promotional Class in the series which had local celebrities taking part.

And so, with the green light given by the health authorities, Season 4 could get underway this weekend – but with some conditions for the protection of participants. Apart from the strict observance of Standard Operating Procedures that every Malaysian should now be familiar with, the public also could not attend the event held at the Sepang International Circuit. This is similar to many motorsports events in the past year, including F1 races, where spectators have been absent. Instead, organisers have provided live broadcasts of the races and GAZOO Racing Malaysia has done likewise for this weekend’s activities. 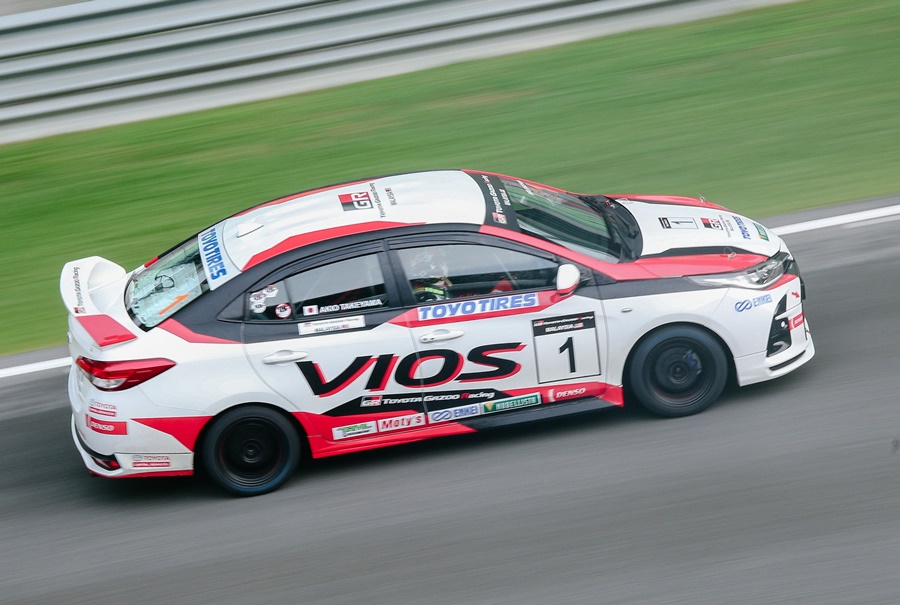 “This is our fourth season organizing the Vios Challenge and the TOYOTA GAZOO Racing Festival, and we constantly challenge ourselves to improve and push the limits not only in terms of our vehicles but also what the brand represents,” said GAZOO Racing Malaysia’s Chief Motorsport Officer, Akio Takeyama (who has been racing in every season in the Promotional Class).

“We are very much committed to continuing with such activities moving forward and you can expect an even better performance from Toyota, our vehicles, the activities we undertake, and from all the drivers who continue to support in making the Vios Challenge a huge success,” he promised.

PROMOTIONAL CLASS
Mr. Takeyama, who is also Deputy Chairman of UMWT, found himself on the winner’s podium after finishing second position in the battle of the celebrities in the race while newcomer Zizan Razak stormed to victory in a wet race, with fellow newcomer Ahirene Ahirudin coming in third place. Quite an impressive showing for the two first-timers in the Vios Challenge. 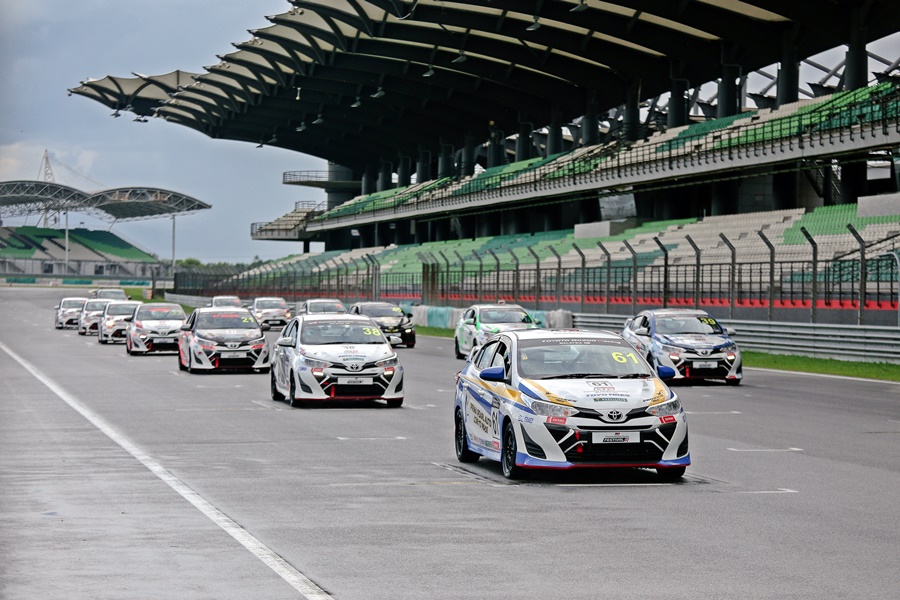 Earlier in the race, actor Shukri Yahaya had shot into the lead from pole position with TV presenter Nabil Ahmad in second and Zizan in third position. An early mistake however, sent Nabil out of contention for a podium finish which paved the way for a two-car battle for the lead between Shukri and Zizan. The latter eventually inherited the lead as early as the third lap with a brilliant overtaking move.

“Because this was my first race, I was honestly just out to gain experience. The rain however, worked in my favour. I enjoy driving in the wet!” said Zizan.

Starting the race from sixth position, TV presenter Ahirene kept her calm throughout the 18-lap race and benefitted from the misfortunes of Shukri, Nabil and singer-song writer Talitha Tan who started the race ahead of her. 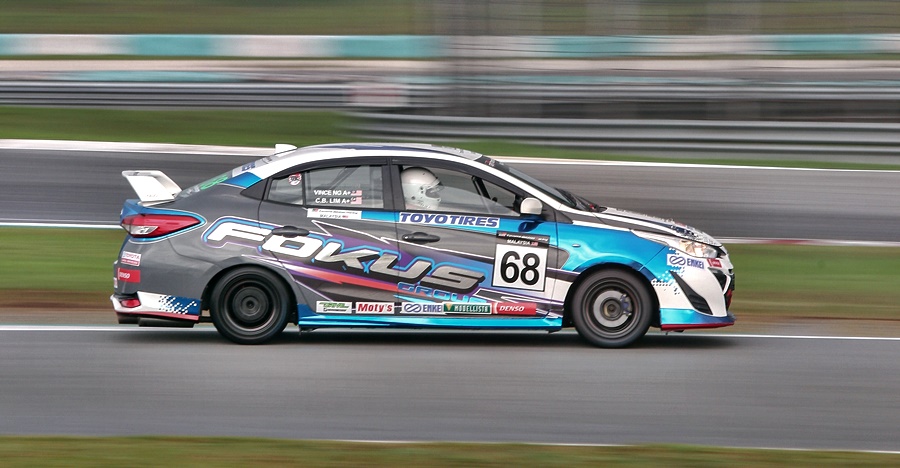 “I want to thank Toyota for inviting me to join Season 4. I was a bit nervous before the start of the race, especially with the rain making it more difficult and challenging. I really wasn’t expecting anything and I just wanted to enjoy the race,” said Ahirene, who has racing experience on 2-wheelers and is also in the Royal Malaysian Navy.

SUPER SPORTING CLASS
In this top-tier class, the lead exchanged hands 4 times in the 20-lap race before GAZOO Racing ambassador and Prima Pearl Auto driver Tengku Djan Ley overtook M7 Japan Project Team’s Syafiq Ali for the lead in the very last lap for victory. Coming in third was 16-year-old Hayden Haikal who was making his debut in this class after impressive racing in the previous season. 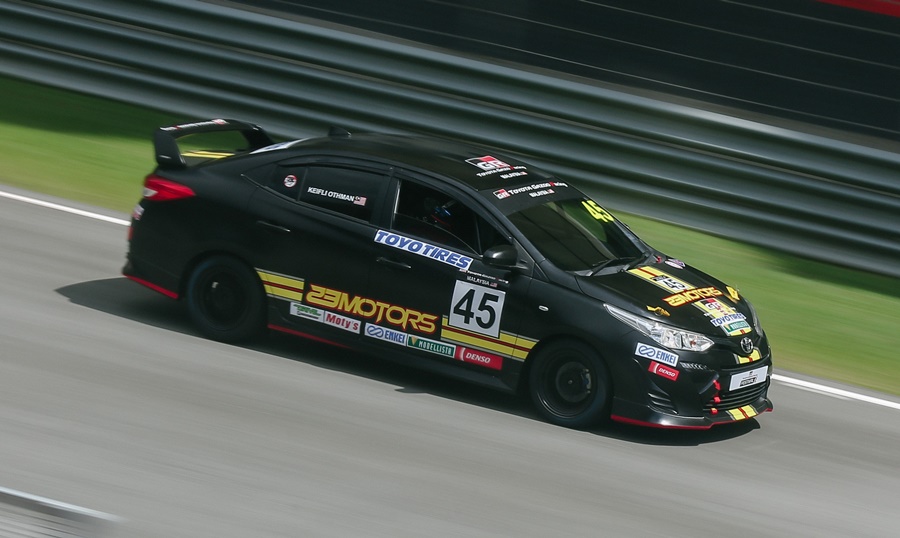 The start of the race around the North Track (half of the whole circuit) was delayed for 20 minutes due to a brief thunderstorm as the cars lined up on the starting grid. Conditions on the track precipitated for two citing laps behind the Safety Car for safety reasons and the Race Director decided on having a rolling start instead of a conventional grid start.

Laser Motor Racing’s Mark Darwin led the first 2 laps from pole position with Hayden and Tengku Djan hot on his heels. Hayden pushed into the lead on the third lap and held the lead for more than 10 laps before conceding to Syafiq who later led for another 5 laps. With all the action up front, the experienced Tengku Djan paced himself and was ready to strike in the very last lap. 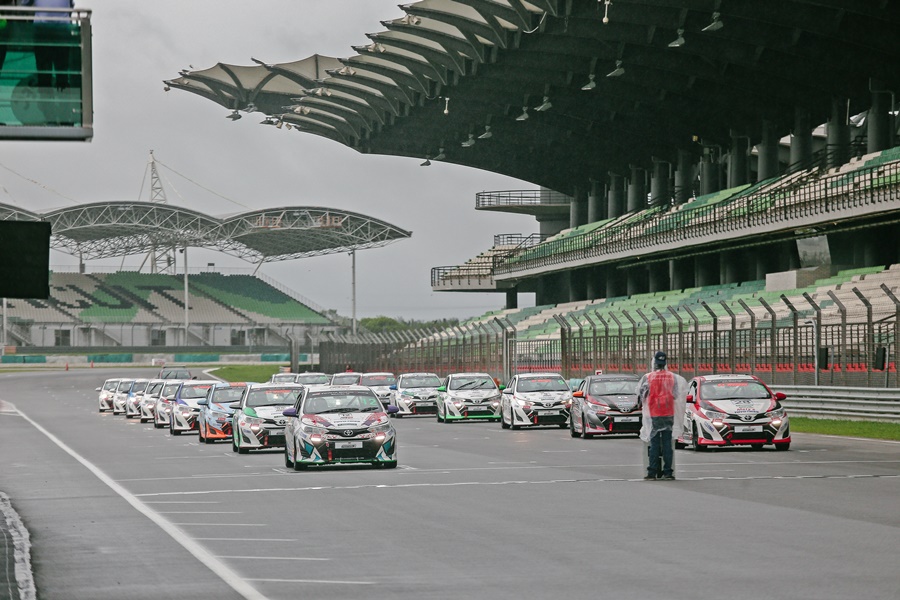 “Instead of me paving the way, I let others do it. It was a difficult race to begin with as Syafiq was super fast. Rather than trying to defend my position I decided to just follow him and understand what the front competitors were doing and observe where their strengths and weaknesses were. I knew the race would be decided in the last 2 laps and that was when I started to push and began to make my move,” said Tengku Djan who is also Season 3’s defending Super Sporting Class champion.

ROOKIE CLASS
In the battle of the young drivers in this new Class, the top 3 podium positions were surprisingly dominated by two simulator racers and a single karter. The graduates of the GAZOO Racing Young Talent Development Program certainly made a good impression on their debut race.

For Naquib Azlan, who was fastest throughout practice and qualifying, the 20-lap race could not have been a more memorable debut for the young simulator racer who was racing in a saloon car for the very first time. He finished the race ahead of karter Amer Harris and a second simulator racer, Mika Hakimi.

“The weekend has gone really smoothly and we managed to achieve everything we set out to do throughout practice, qualifying and the race. I was hoping to have been able to keep up a little bit more with the Super Sporting Class drivers [in times] but the main goal was to win the Rookie Class. These guys [in the Super Sporting Class] are really quick,” said Naquib.

Representing the karting fraternity, Amer was also pleasantly surprised with his result. “I had a really bad start and to be honest, I wasn’t expecting to be up to speed especially in the rain. I caught up to Naquib but I later made a mistake,” said the 17-year-old.

SPORTING CLASS
With 19-drivers on the grid, the Sporting Class was the most highly-anticipated race, and the return of the rain made conditions even more challenging for the drivers. At the end of the 20-lap race, it was Crestmax Motorsport’s Adam Khalid who took the chequered flag ahead of Team Distinctive Model’s Clement Yeo and privateer Eric Yong, all three of whom have been podium finishers in the previous seasons. 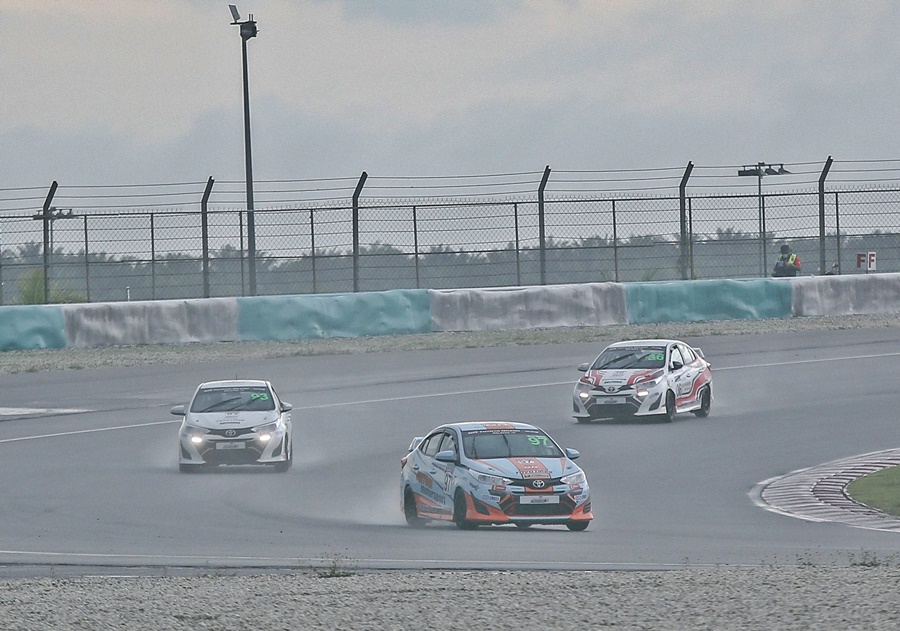 “At the start of the race, it was really tough to find the best racing line because it was dry throughout practice and qualifying and this was the first time I’ve driven the car in the wet. After dropping back a few places and managing to regain my momentum and composure, I tried to save the car for tomorrow’s race. Hopefully, it will be a dry race tomorrow,” said Adam.

Yeo meanwhile, was the biggest gainer in the race having started from seventh position on the grid. “The conditions were very slippery. Every single corner was a gamble and I believe we all struggled for grip. I had a good and lucky start and I was fortunate to have had a clear path ahead,” he said.

Tomorrow sees the second series of races in the Vios Challenge and you can watch the live broadcasts at the times show below: 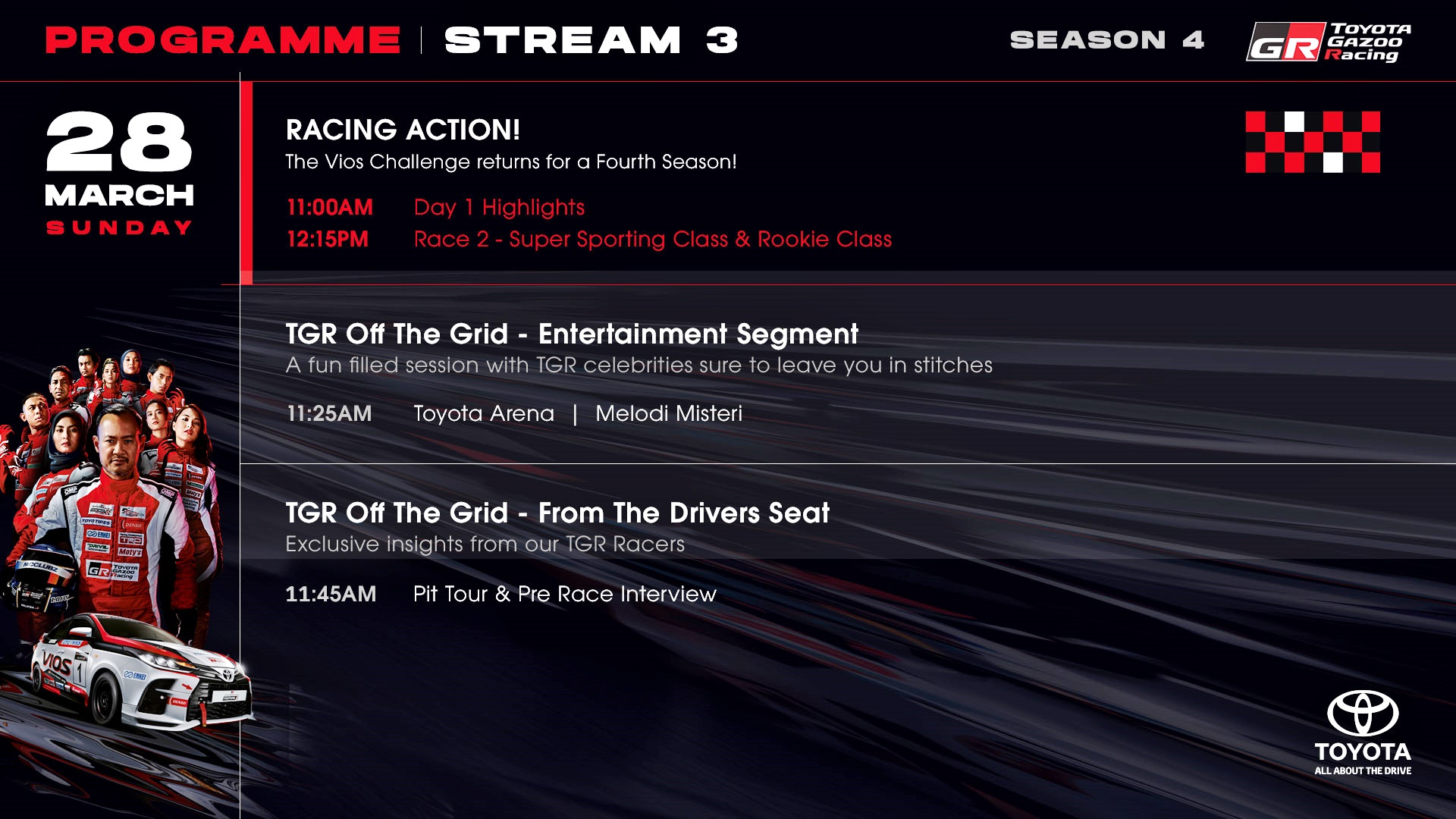 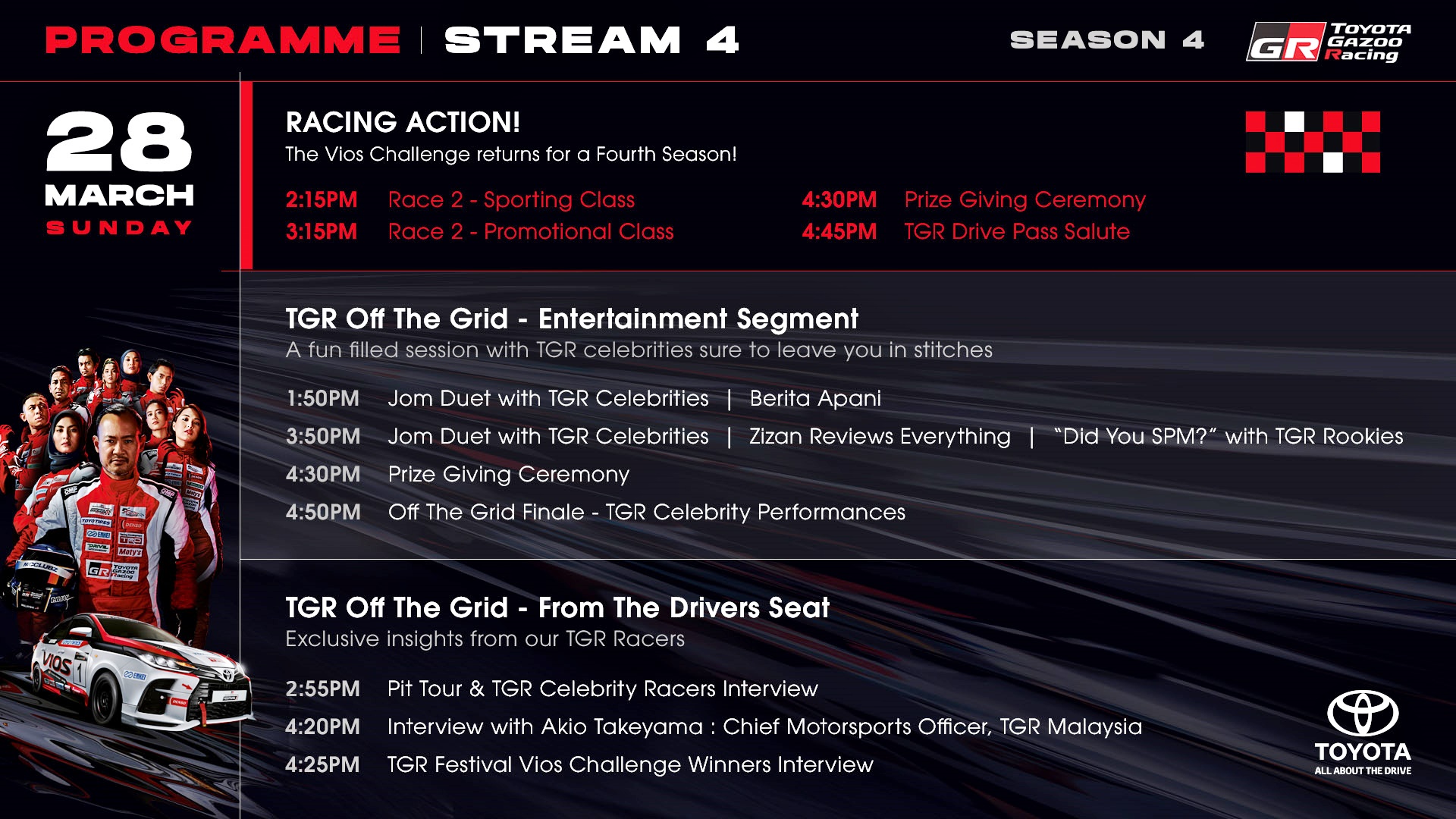 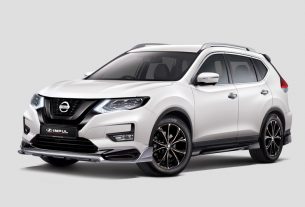 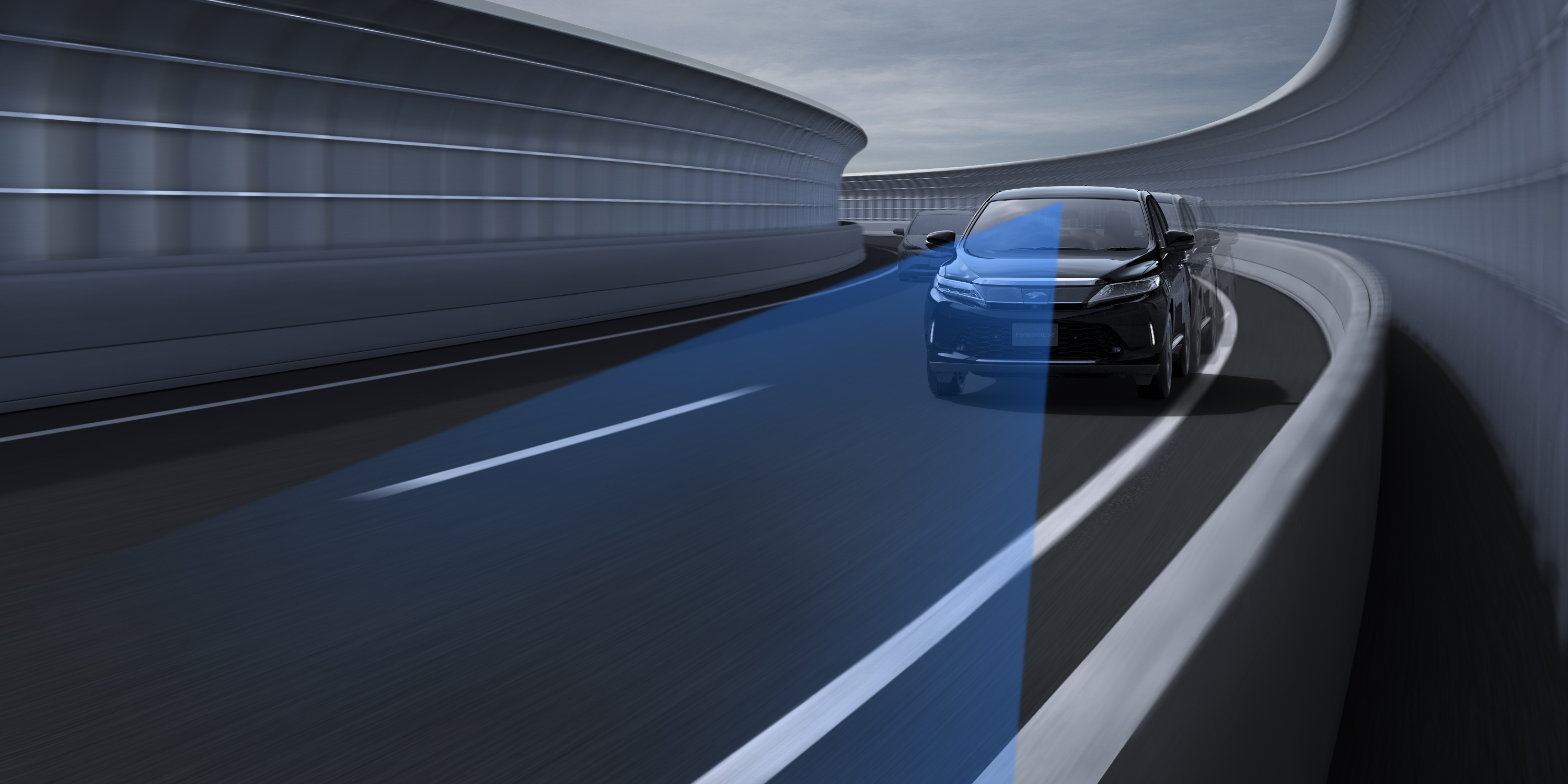 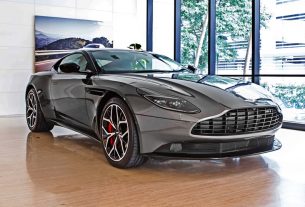