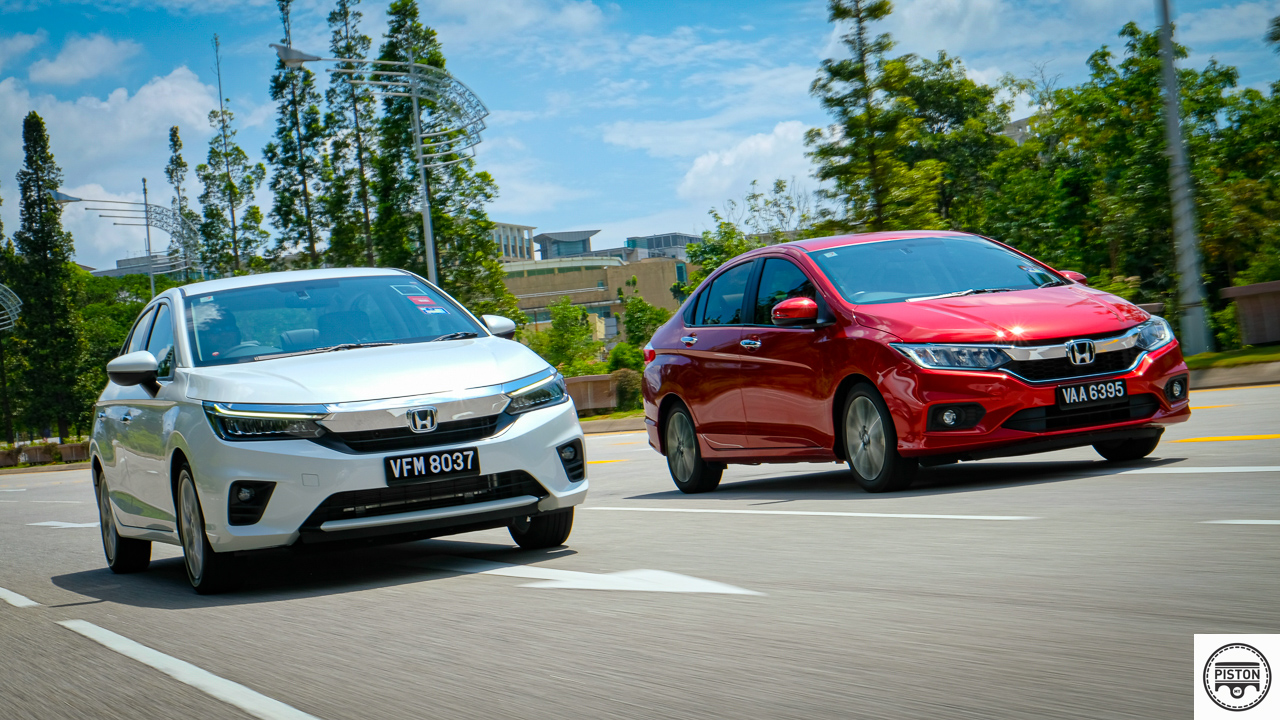 It is said that the best recipe for success is to keep things as basic and to the point as possible. With little fussing around, there’s little room for anything to be of considerable bother.

And in general automotive terms, there aren’t many cars that offer as bother-free ownership as a Honda City. It is as simple a recipe as a good car goes – a good design, a good interior with all the latest entertainment, comfortable seats, good space for occupants and their luggage and good safety features as well. The Honda City has it all yet does not overdo anything in particular. It is an achiever, yet not an overachiever, like a friend that went on to become a doctor, a GP, but not an industry dominating specialist. 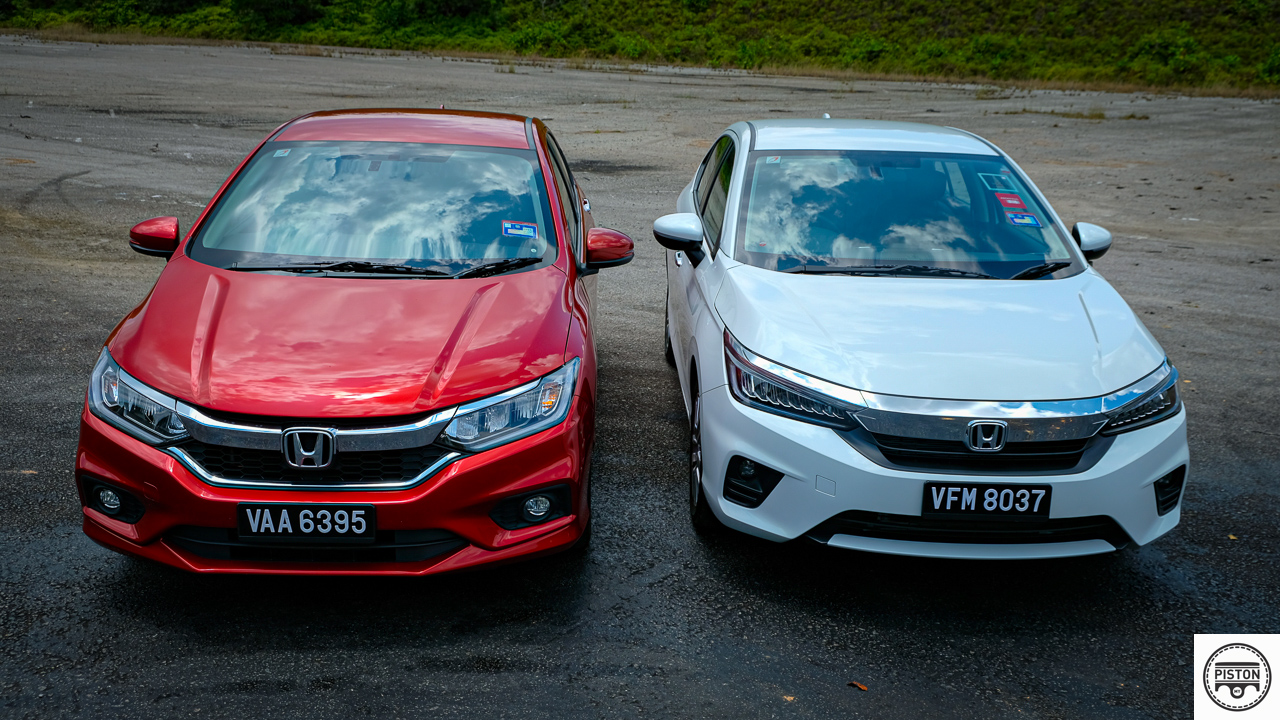 That is until a new Honda City is introduced. And that is exactly where we are getting at with this article.

If you are a current Honda City owner and swear by it, then this would be a good time to trade up to the latest City. Or if you have always wanted a Honda City but have been waiting for the right moment to strike, well, that moment has arrived. Or if you just want a car that can safely and comfortably take the kids to college or uni.

The fifth-generation City has proven to be galaxies apart from its predecessor. And in this article, we give you some good reasons why this is the car you should be going for should you be looking to upgrade

Lets start with the interior..

The interior is leap years better than the City it replaces. In fact, we even dare say that it is as good an interior as an E46 BMW and save for a couple of panels here and there. Perhaps even as good the E90.

We are talking about quality and fitment here. And that’s before we get to the seats and the interior features.

But on the topic of the seats, this is the one part that has improved by leaps and bounds. 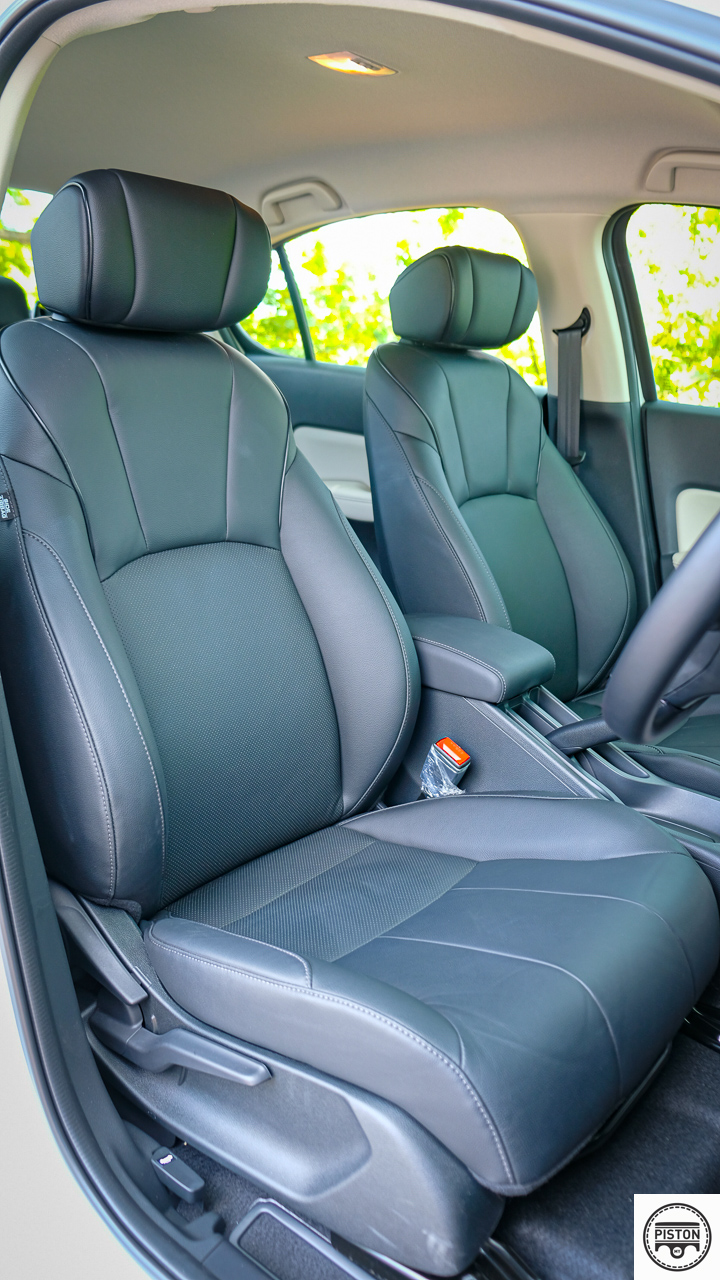 The seats in the new Honda are among the most, if not THE most, comfortable seats in the segment. You can probably feel the comfort level of the seat from the photo above alone, and when compared to the model it replaces (old seats shown below), the difference in comfort is akin to night and day in comparison. 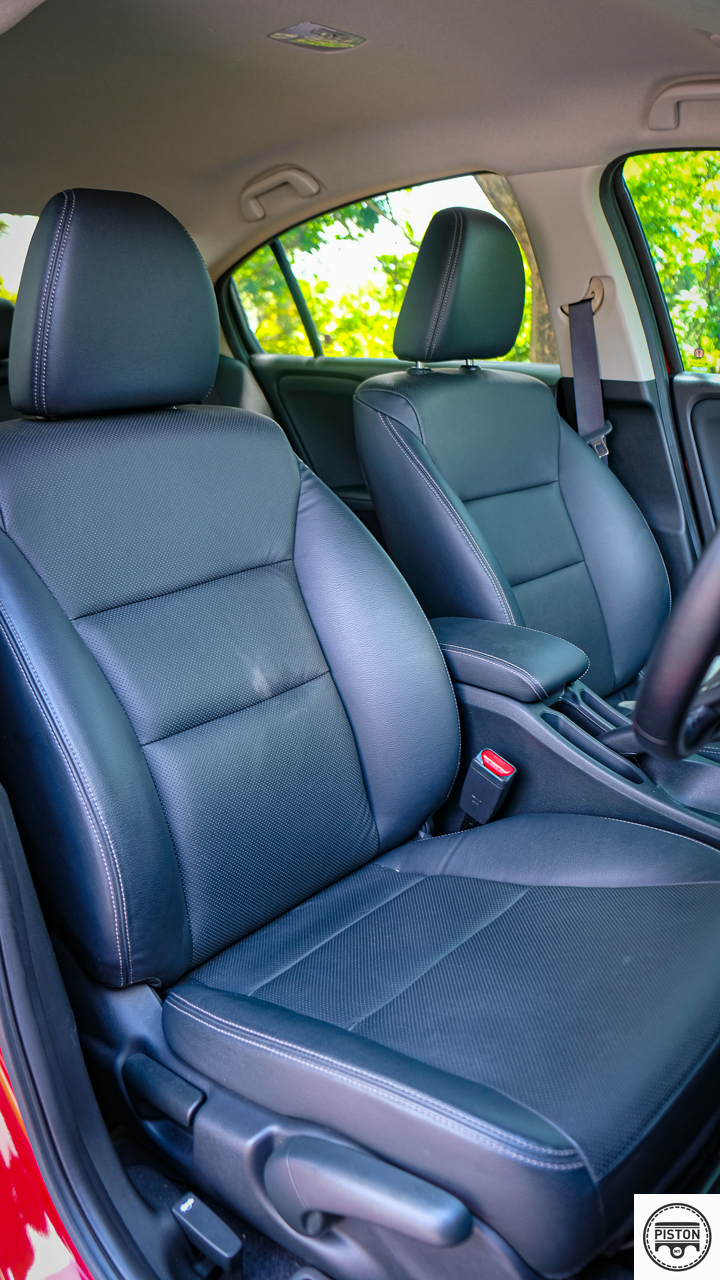 This is of course in the top of the line V-variant, the others don’t offer such perfectly padded seats. And seats have to look just as good as they are to sit on, because great looking seats would be half the battle won. Don’t believe us? Why do you think Bentley or Rolls-Royce put in all that effort to ensure the leather they use are devoid of any imperfections? Because aesthetics are everything. 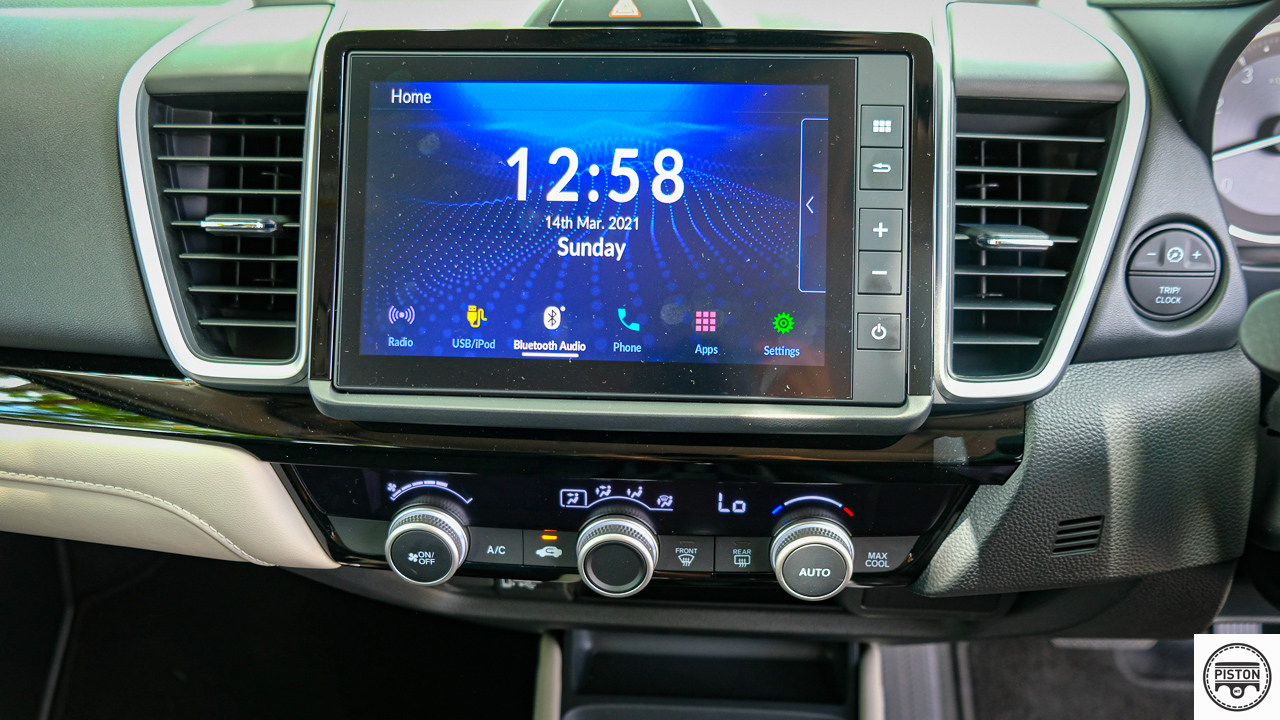 And then there is the onboard entertainment system. Accessible via an eight inch touch-screen display, which is again leaps and bounds better than the model it replaces, which offered only a tiny screen that was completely counter intuitive and looked and felt like it was installed at a local ‘brother’s’ outlet (shown below). In fact, it was so difficult to connect the bluetooth functions of your phone to the previous generations entertainment system that it was easier to simply talk on your phone while driving and paying the ‘saman’ you get for it than connecting your phone to the entertainment system. Worse if you had more than five people in the family sharing the car because the system only remembered five profiles. You had to delete on just to connect your own. 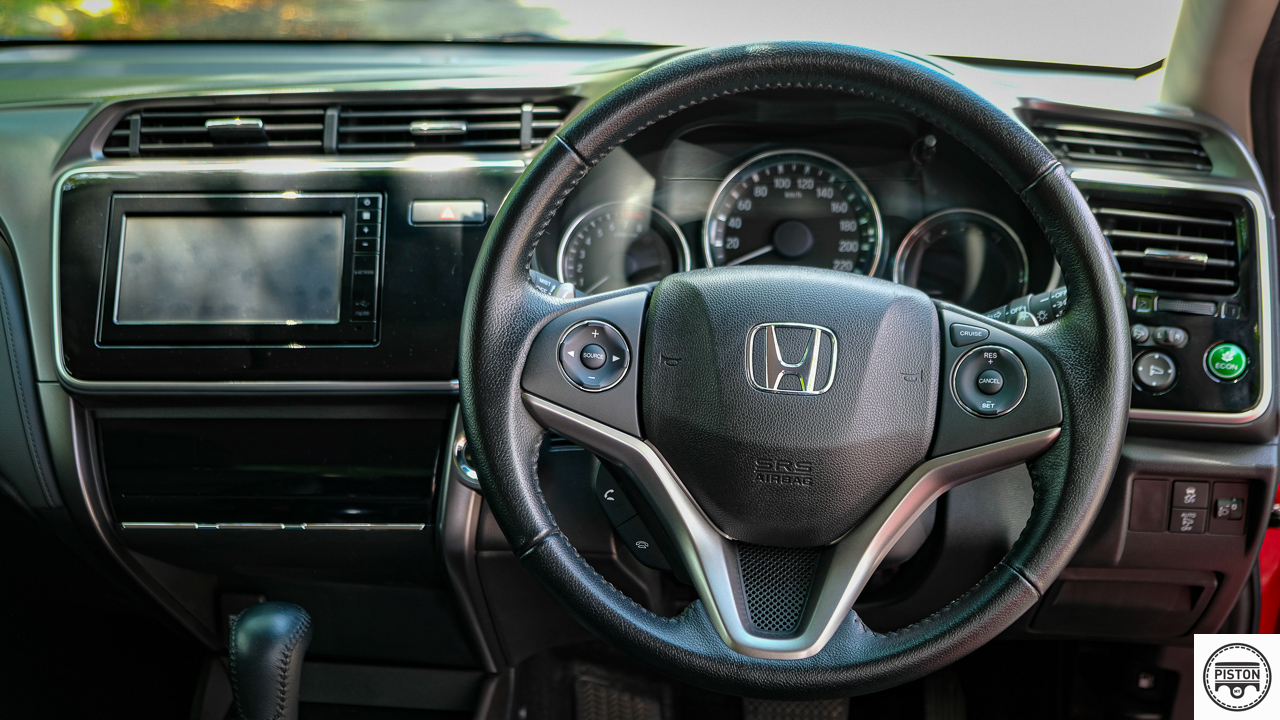 Now though, the entertainment system offers Apple CarPlay and Android Auto and the touch screen system is intuitive and easily navigable that even boomers would find it difficult to complain about. 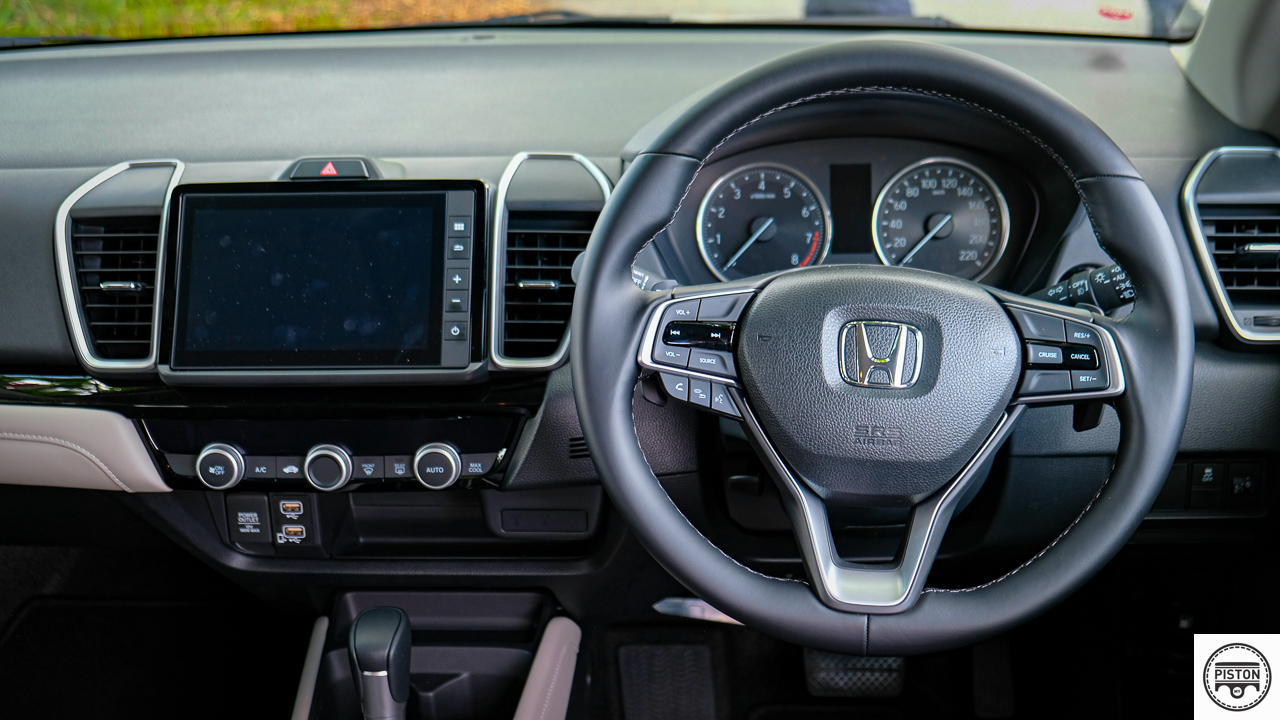 Basically the interior is so much better than before that even the new steering wheel (above) feels like it has progressed about 20 years from the older model, both in touch and feel as well as functionality. 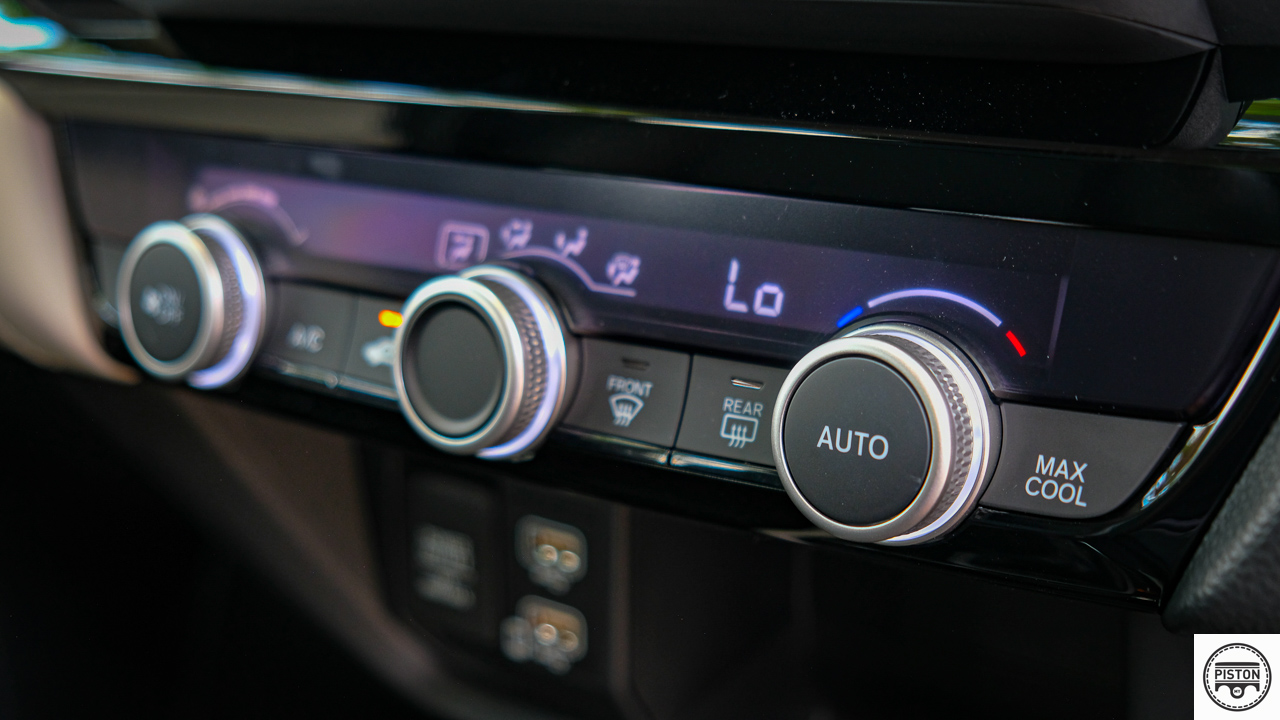 Then there are the air-conditioning controls. But before that, let it be known that we are huge fans of rotating dials because there is nothing more straight forward and to the point than one of those circular things that control functions so accurately.

The dials in a Lexus for example feel so good that it is reminiscent of a high-end audio amplifier, one of those that costs a kidney and feature a heavy metal dial. 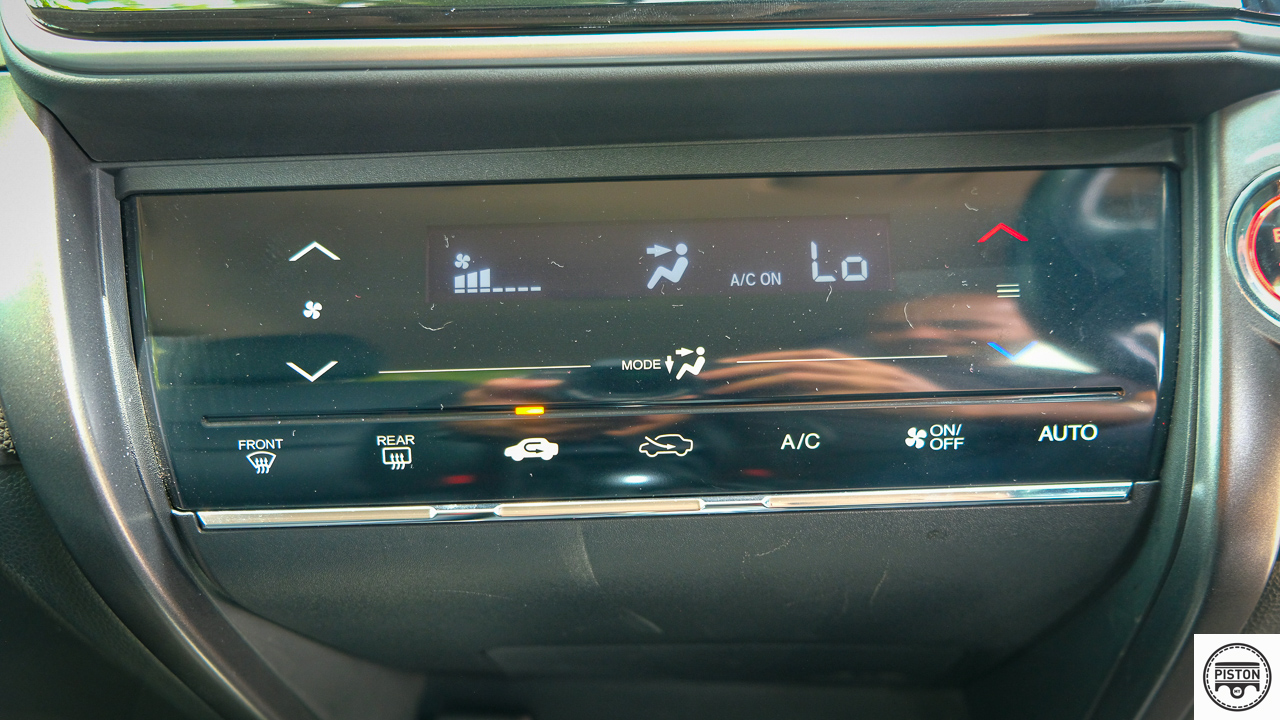 The one in the Honda City is not made of metal and it doesn’t feel like you would need to sacrifice a kidney for it, but it feels good enough. And it is a much welcomed departure from the old touch screen ones where you had to tap it a couple of times if you wanted the blower to work harder, or to set the temperature. Now, all you have to do is rotate a dial. Simplicity is bliss.

Well, the two run on almost the same engine, except that the new 1.5-litre now comes with a new DOHC units that puts out 121PS and 145Nm of torque. Just for reference, the previous City put out 120PS and the same 145Nm of torque. So there really isn’t much difference in terms of power, neither is it worth mentioning.

But the new City is more efficient in terms of fuel efficiency, and when it comes to a car like the Honda City, that is ultimately what matters (simply because no one buys a Honda City for its power figures). The driving habits of the drivers behind both cars were a lot different, but during the photoshoot for this article, the new City still had about half a tank of fuel left while the older one was close to E! And both started at about the same fuel point. 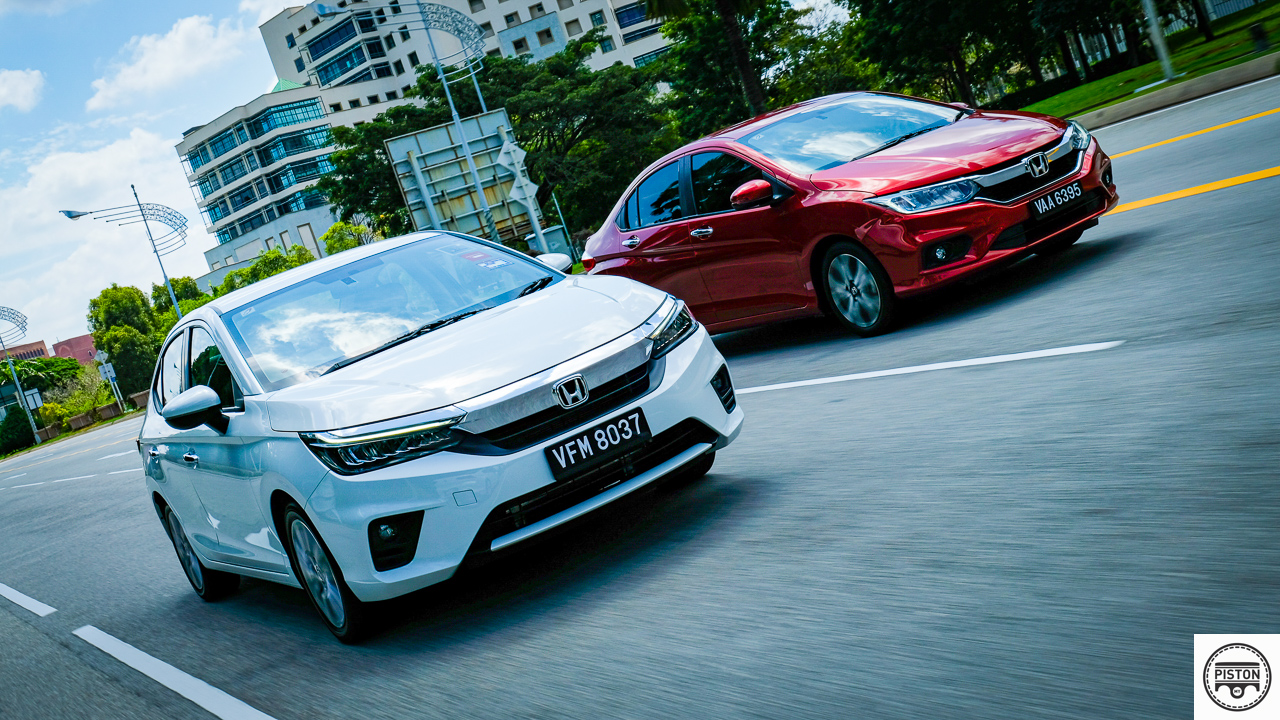 Yes yes, this is where you can bash us a little and we will graciously accept. Because everyone feels entitled to become a keyboard warrior these days, you could perhaps argue that there is very little that a trip to an accessory shop cannot fit. And you may be right. But we would like to beg to differ here. Simply because there is one mega difference that really drives us up a very slippery wall when it comes to the design of the new City. 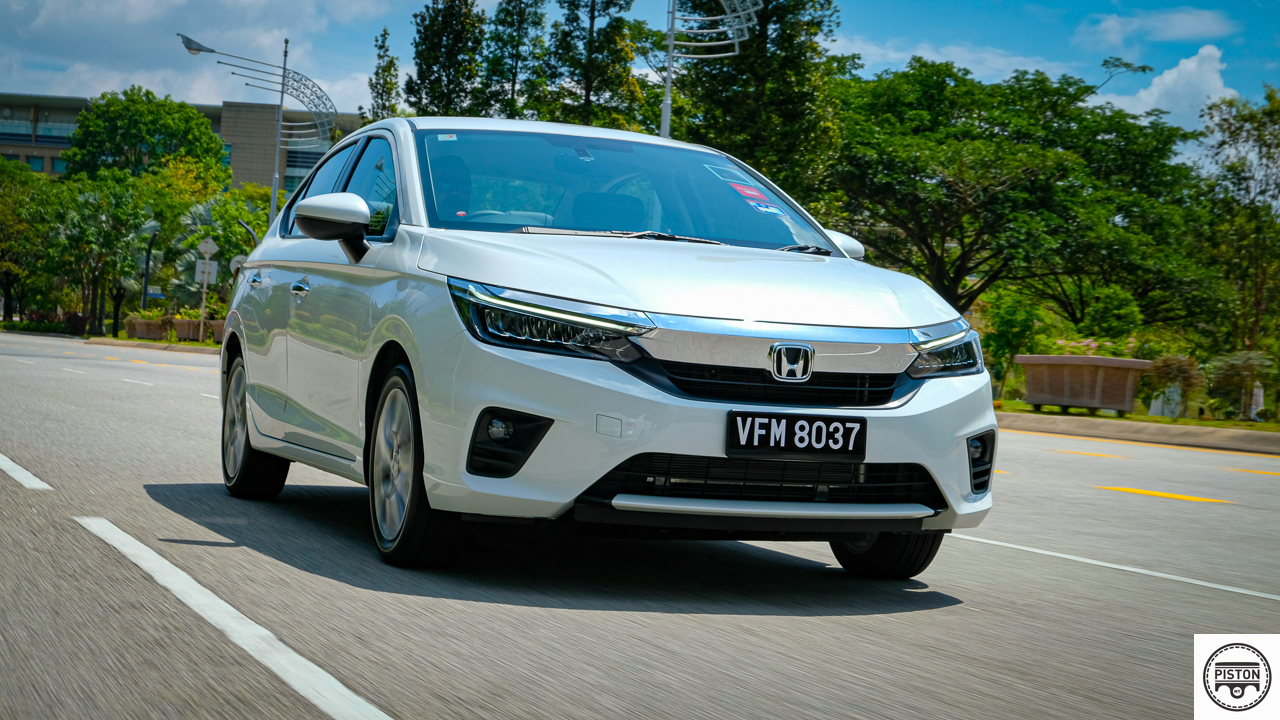 Everything is nice and dandy from the side. The rims look great. And that rear too is much more proportionate now than ever before. Some do say that the new City looks too much like a BMW 3-Series, but looks are subjective. But then again, there really is nothing wrong with mimicking a successful formula, especially when a City starts to look and feel like a yesteryear Beemer. 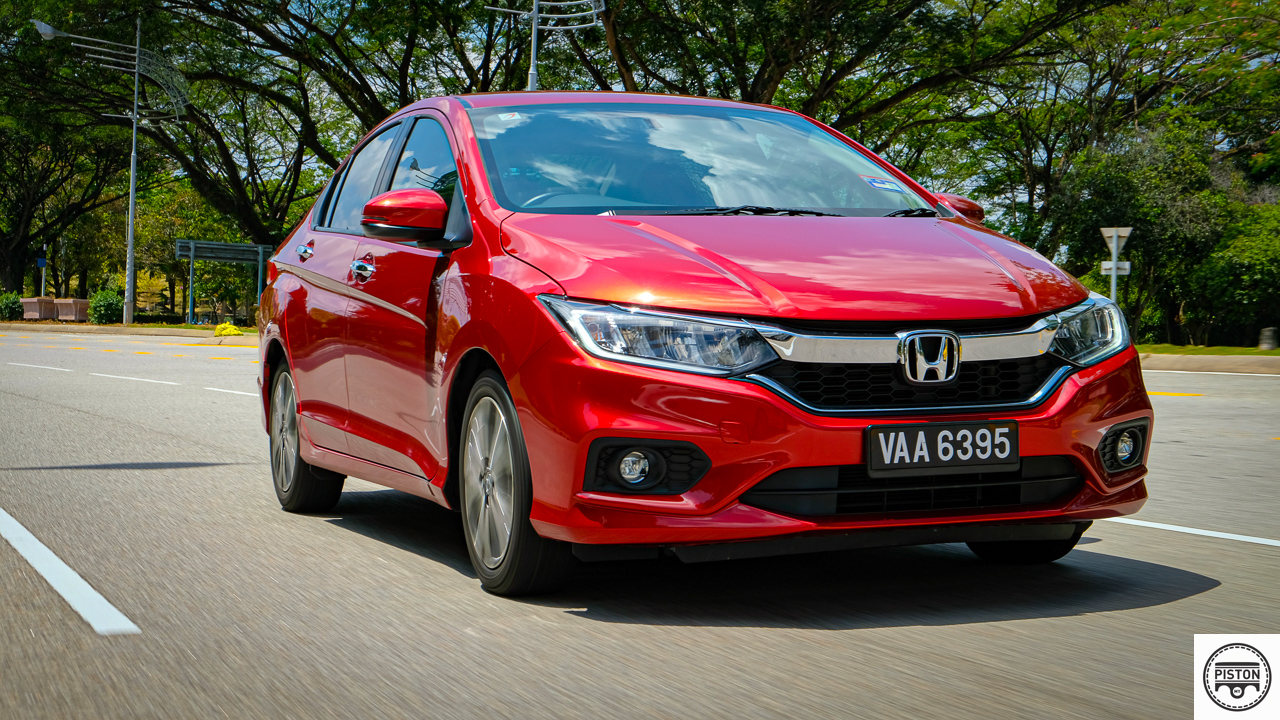 But what in the world is up with that mega chrome strip up front that sits right above the grille and seems to merge into the bonnet? That elongated chrome strip of the previous City was bad enough, but now that it is bigger, bad has become worse! It could possibly blind on-coming traffic when the sun is at the right angle, or the driver of a car in front could suddenly be blinded when the sun suddenly glares him through the rear view mirror.

Of course, these are all probabilities, and no one has really reported of such things happening in the real world. But if there is anything that a trip to an accessory shop can fix, it would be the complete removal of that fat chrome lip up front. 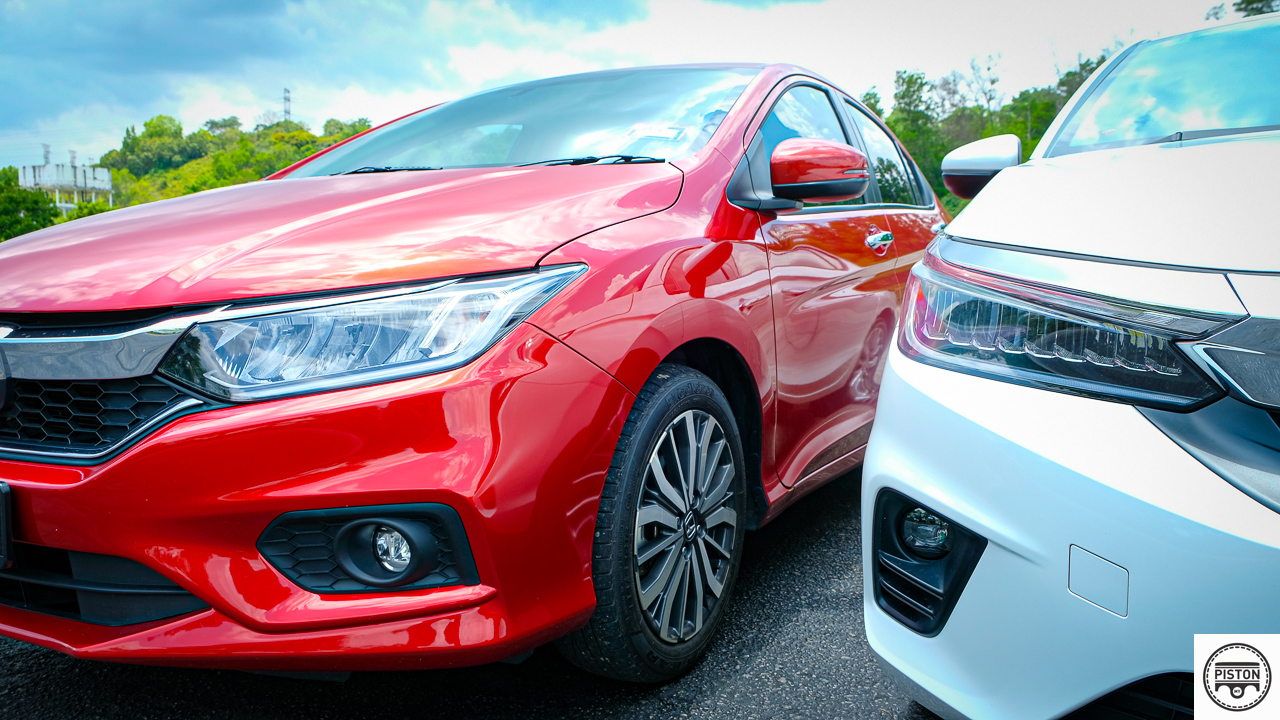 We do however love the design of the headlights of the top of the line V-spec, which also work fantastically well in the dark.

We have already touched on how comfortable the seats are in the new City V-spec. But spaciousness is the name of the game here. And the new Honda City is more spacious than before. And you really do feel it when you get inside. There’s more leg room, and the back rests are angled ever so slightly, so you sit more comfortably. 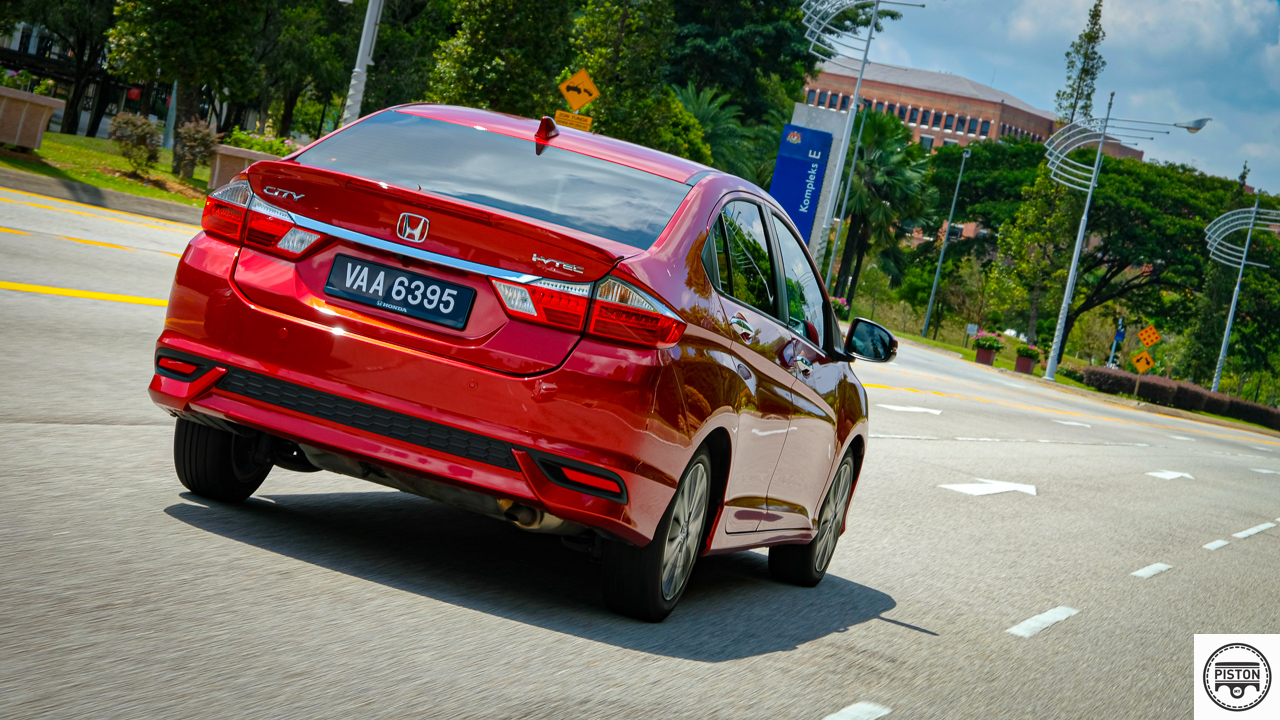 This is quite obvious considering that the new City is bigger than the car it replaces – it is longer, wider and lower. The wheelbase is the same yet there is more interior space for passengers. Curiously though, booth space is a few millimetres smaller than before, but in terms of booth space, the City still offers the most space when compared to its competitors. 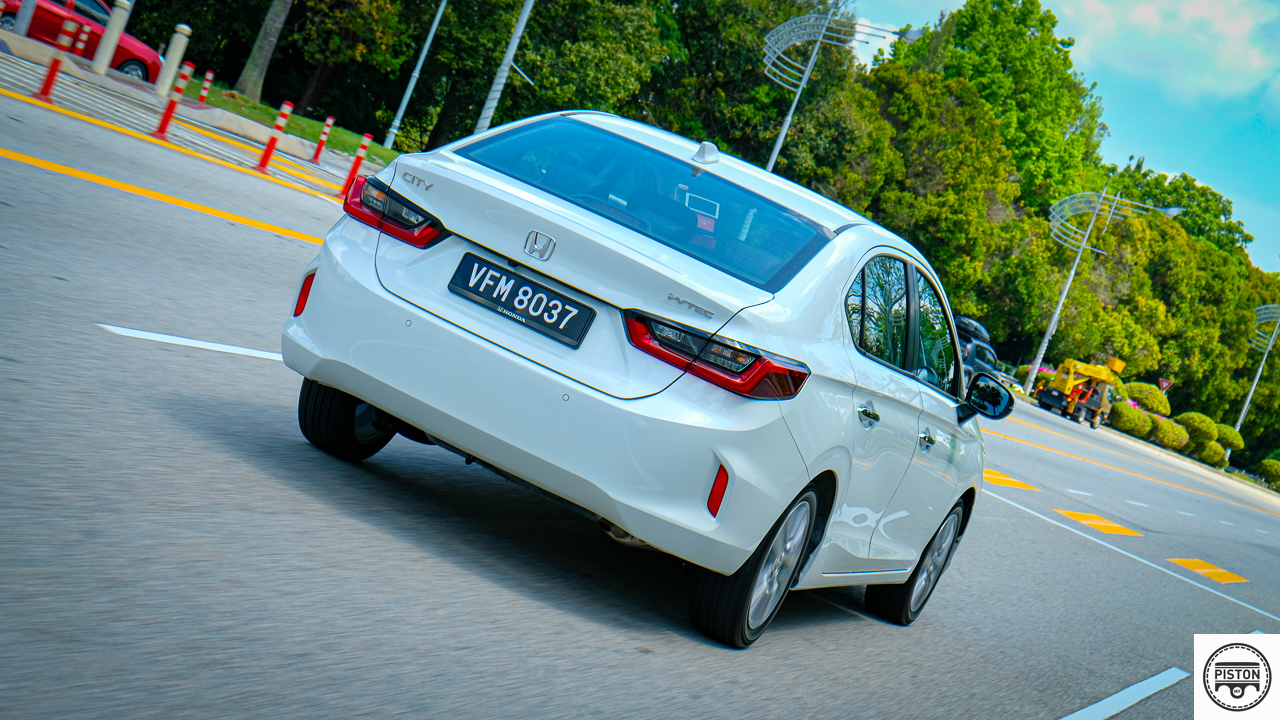 The entire purpose of us writing this article is because there are people out there who simply swear by the Honda City. And some love it so much that some families buy two or more of it. This writer’s family being among them, and knows of a few more families that do as well.

We never understood such buying behaviour because ‘variety is, and always will be, the spice of life’, and if you need more than one or two cars, you simply do not buy two of the same. Why not buy different cars and swap among family members so you never get bored of driving the same car?

But that’s just us.

So if your family swears by the Honda City – then trade up to the new one. Or if you are looking for a car in this segment, then the new City will not disappoint. And there has never been a better time than now.

The Game-Changer Strikes Again with the 5th Generation Honda City 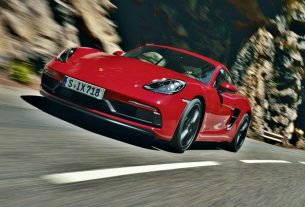 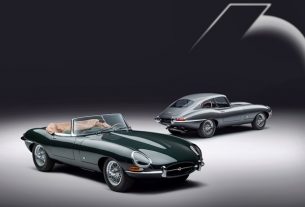 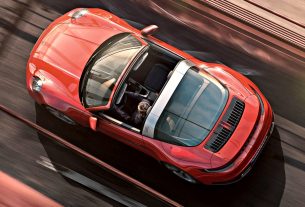