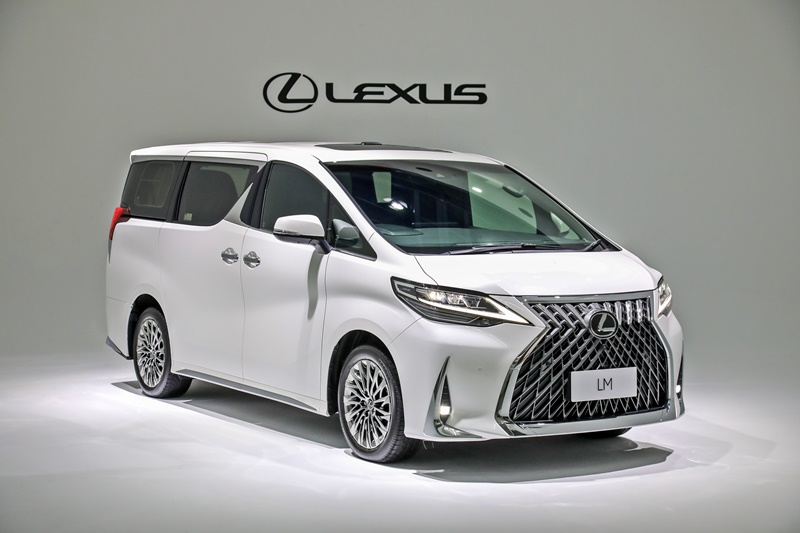 The launch of a model that costs a million ringgit (actually more) usually means it is from one of the premium luxury brands, typically a flagship model and usually a limousine unless it’s a super sportscar. But the million ringgit model (RM1.148 million without insurance) launched today is not a limousine – it’s a MPV… the Lexus LM350. While there are already some SUVs that cost over a million ringgit, a MPV at the price level would raise eyebrows although there are probably customized units that cost that much with a lot of additional equipment.

Only for a few Asian markets
However, the LM350 is not a customized Alphard – which Lexus does not deny is a similar model sold under the Toyota brand – and is a fully engineered model with super luxurious equipment. While the LX SUV model, which is a Lexus version of the Toyota Land Cruiser, is sold in quite a number of markets, the LM350 was conceived for customers in just a few Asian markets, Malaysia  included. Interestingly, the MPV is not offered in the Japanese market where they probably have very luxurious versions of the Alphard anyway. 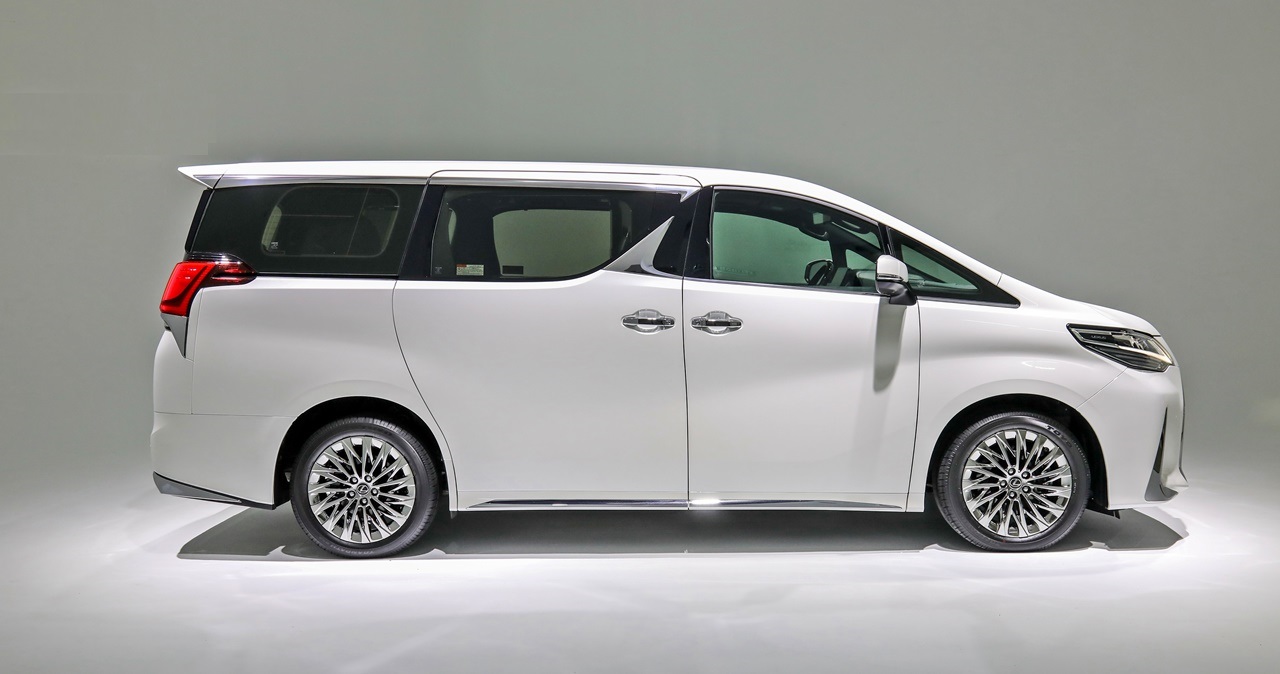 The other thing about the LM350 which may also have some saying the price is ‘outrageous’ is that it is a 4-seater. Yes, a giant vehicle with just two seats in the passenger area that occupies three-quarters of the 5040 mm overall length. Having two large seats at the back is not unusual since the LS also has such configurations although in a MPV, that gives a whole new meaning to spaciousness and comfort.

First Class experience on wheels
The way the cabin is set up has led Lexus Malaysia to liken it to the experience of being in a one of those First Class suites in an Airbus A380. And instead of oval windows along the side, there are large glass panels (suitably tinted, of course) which provide a panoramic view of the world passing by. The ambience can be enhanced at night with a large glass Twin Moonroof overhead. 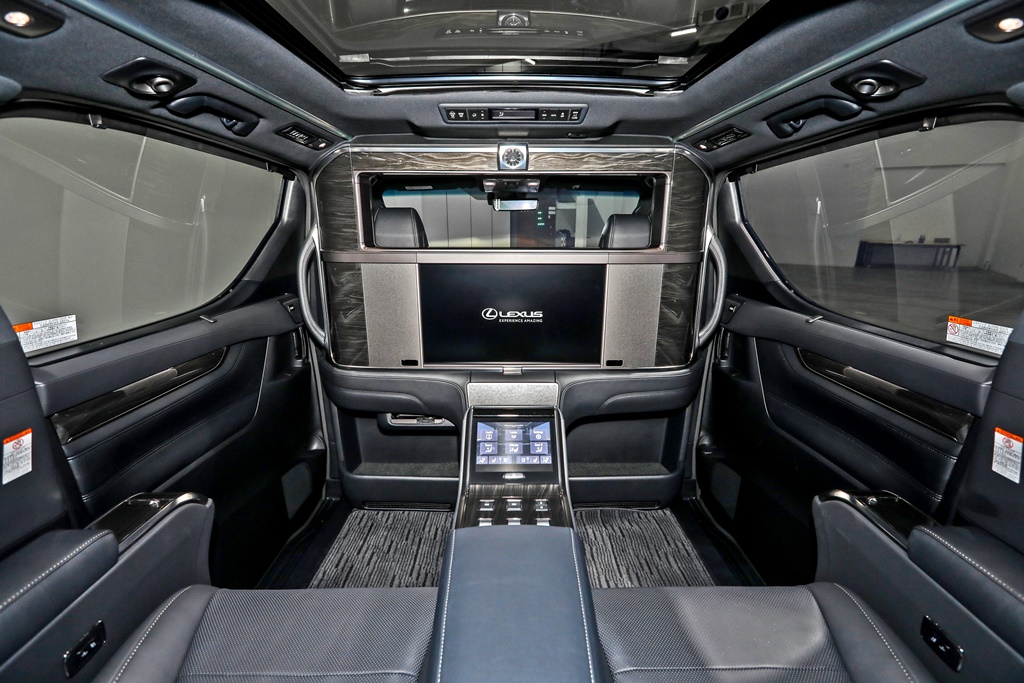 Besides this, the cabin lighting is subtly recessed around the moonroof in the ceiling and can be illuminated in 16 colours and four brightness levels. This enables occupants to personalize the ambience of their private space to match their mood, from working to a power nap, at the touch of a switch.

Access to the cabin can be from either side through doors that quietly slide open or close. The crafted interior, installed by the takumi craftsmen of Lexus, reflects the ‘omonetashi’ spirit of Japan which refers to utmost hospitality.

The most comfortable MPV seats?
The 2-seats have semi-aniline leather upholstery and feature AdaptiPedic rate-sensitive response foam, its use in the LM350 said to be a world-first. This is an innovative seating foam which conforms to each passenger’s physique, promoting correct lumbar posture and a snug fit while mitigating pressure points to provide exceptional comfort and support. It also has excellent vibration absorption characteristics. 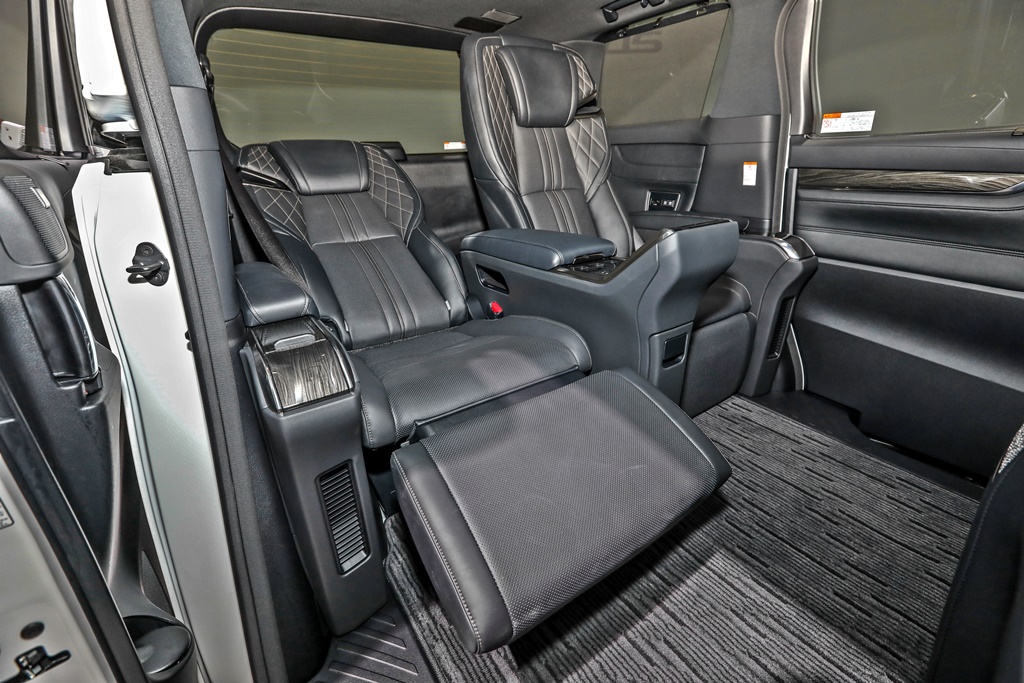 While the seats cannot fold flat into a bed, they can be stretched out and reclined in an Ottoman configuration which would provide exceptional comfort. An example of the Lexus attention to detail is the height of each seat – this has been carefully determined so that the position of the occupant’s face relative to the window is at a comfortable level.

The seats are also ventilated for enhanced comfort and they don’t just have fans blowing but also a suction system to draw cabin air cooled by the air-conditioning system through the seat surface. This more effectively reduces heat and moisture, giving a direct refreshing feel. A standard 3-mode cabin partition with a glass dimmer provides additional privacy when desired. 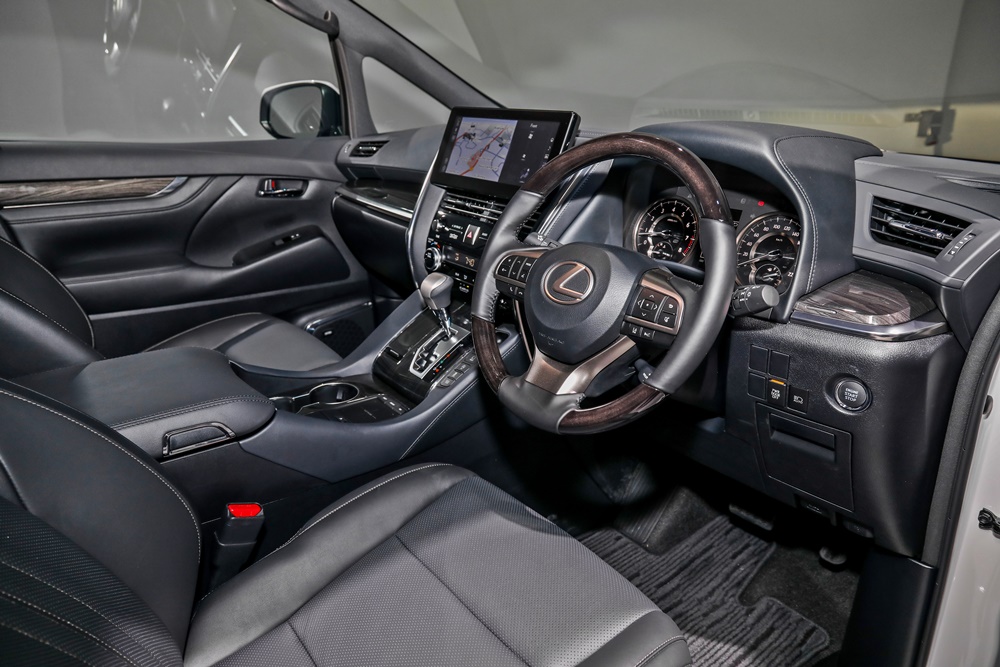 The standard sound system is from Mark Levinson, a leading brand in audio systems which has worked with Lexus for decades. As with every Lexus model, Mark Levinson specialists studied the cabin extensively to identify the best locations for each of the 19 speakers of the QLI Reference Surround Sound System.

Besides the Mark Levinson system, the rear occupants also have a 26-inch Full High Definition 720p display panel mounted on the partition. Various connectivity options allow playing from other media and devices for entertainment or to do a presentation while on the move. 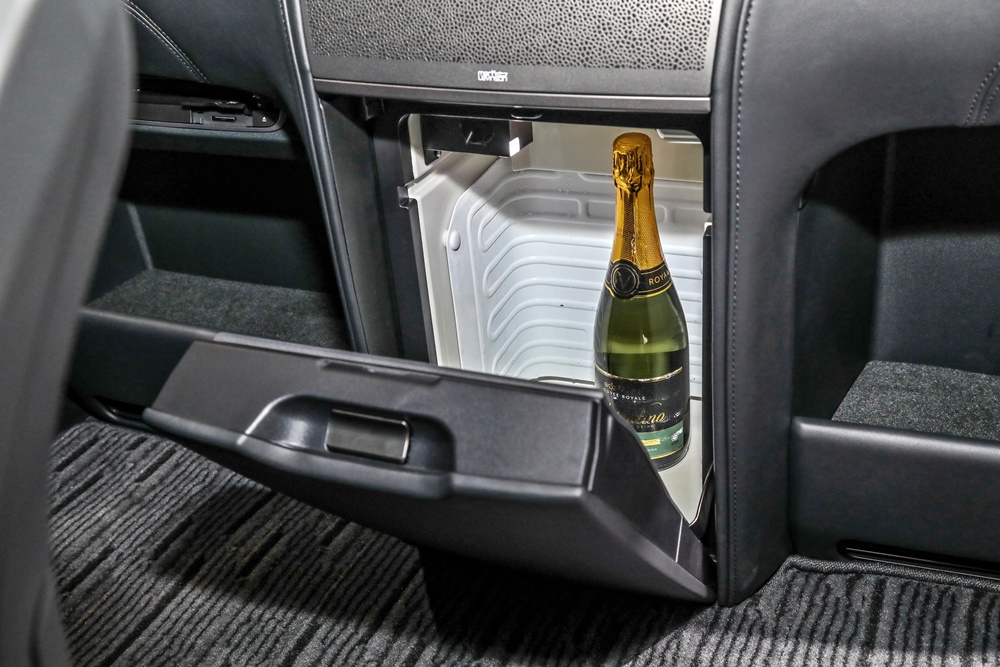 If a deal has been discussed and concluded positively, the two occupants can celebrate with drinks from a 14-litre refrigerator. The rest of the cabin air is kept comfortably cool and clean at all times with the automatic air-conditioning system that incorporates a Pollen Filter and Nanoe Negative Ion Generator. The ion generator is able to deactivate viruses so they do not cause infection, a good thing to have these days.

While the focus has been on passenger comfort, the front occupants haven’t been forgotten although, with the partition, seat adjustment backwards is limited. The driver has everything to maintain full command of the LM350, with the Lexus Safety System+ (LSS+), a sophisticated system that integrates a number of advanced active safety systems. The rearview mirror is a high-tech type – a Digital Inner Mirror which is a Lexus First. It shows a real-time image from a rearview camera and apart from being clear in all conditions, the visibility is also not blocked by the rear headrests. 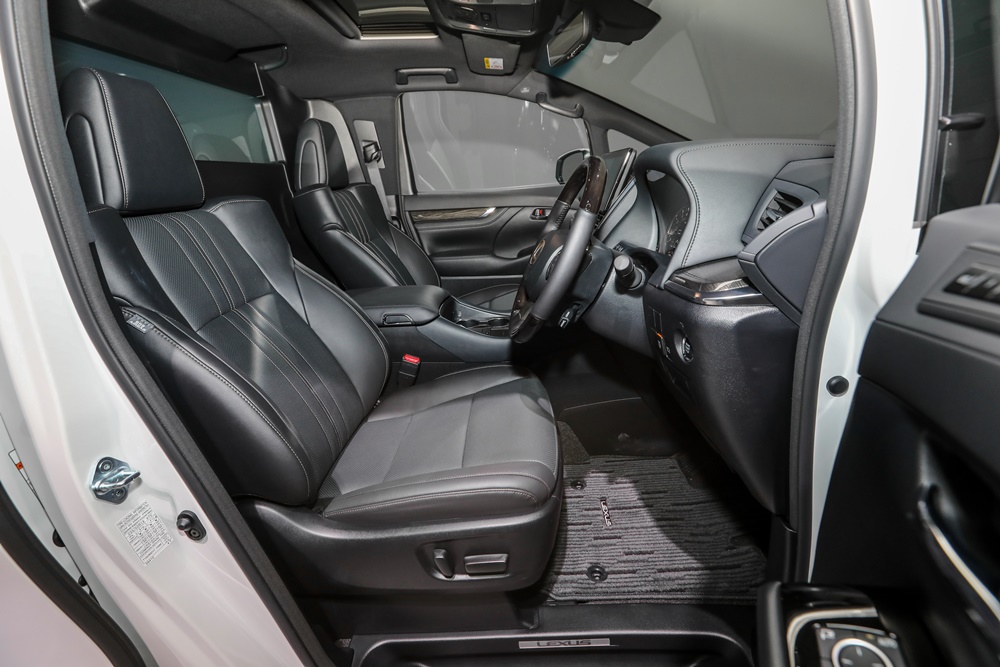 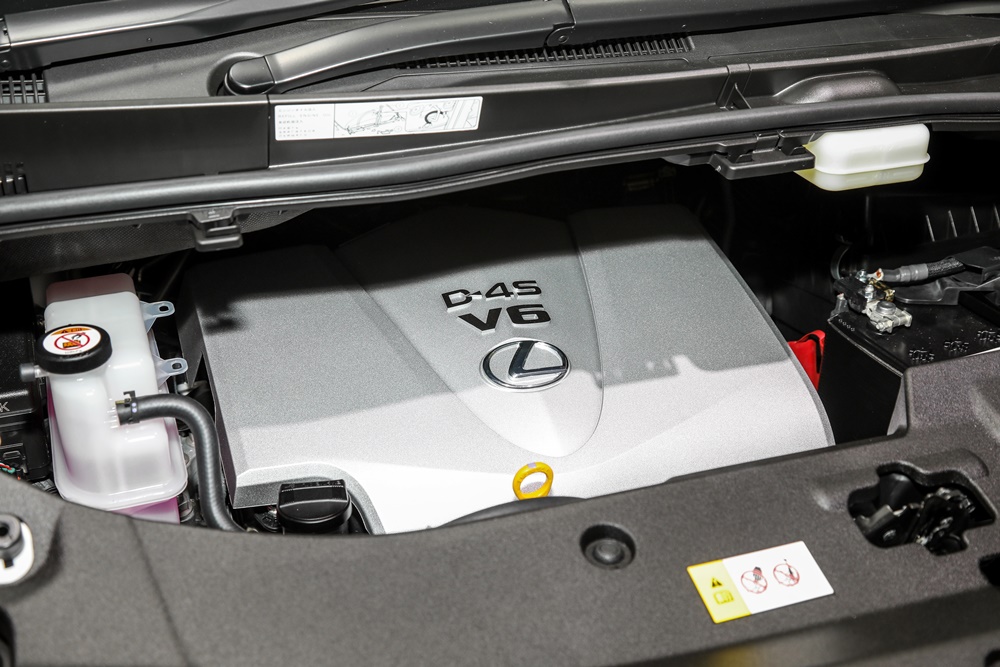 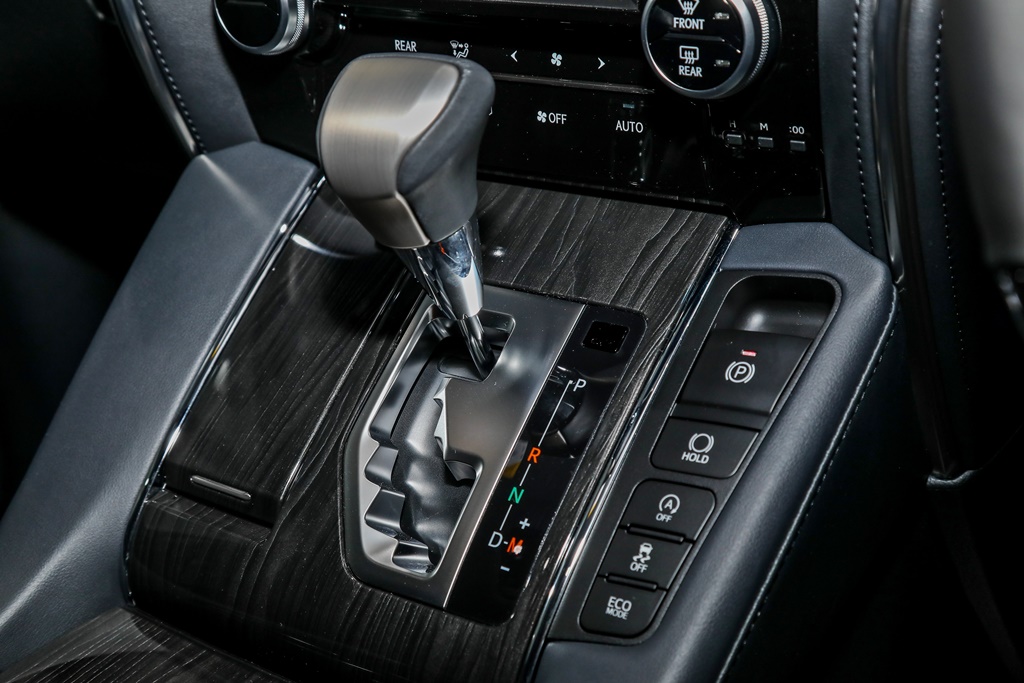 The LM350 is powered by a 3.5-litre 24-valve DOHC naturally-aspirated V6 petrol engine (the proven 2GR-FKS unit also used for other models) which generates 296 ps/361 Nm – more than enough to move four persons around speedily and comfortably. A Direct Shift 8-speed automatic transmission delivers power smoothly and efficiently to the front wheels.

Differentiating the LM350
Although the Lexus designers had a MPV design from which to start, they nevertheless ensured that in every aspect, the design of the LM 350 would conform to the design language of the brand. This, of course, meant incorporating the spindle grille that is found on every Lexus model. It’s huge but the proportions are properly matched to the size of the vehicle, with slim LED headlamps that have the distinctive arrowhead shape of Lexus Daytime Running Lamps. At the rear, LED lamps extend across the entire width of the rear door, also a visual signature of the brand. 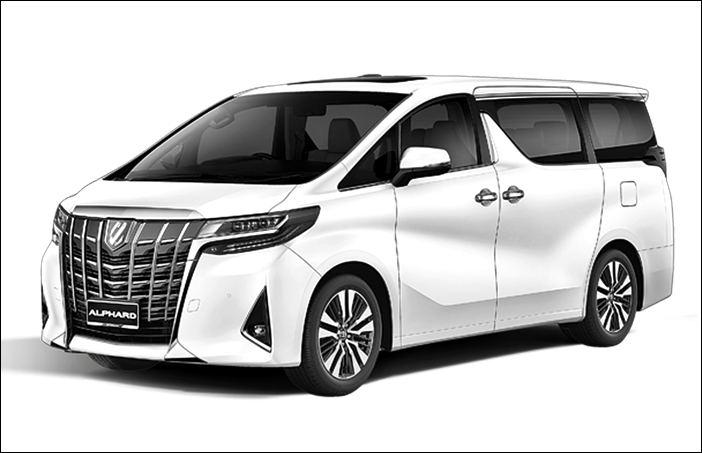 There may be some who will say that they can customize a RM465,000 Alphard to be similar to a LM350 and save a lot of money. True, but Lexus engineers often point out that while some of their models have equivalents in the Toyota range, there is still much ‘under the skin’ that is different. This can be in the materials used (higher-grade insulation, for example), engineering enhancements in certain areas to push NVH even lower, and even the way the engine is tuned. So while there is the notion that a Lexus just ‘a more expensive Toyota’, it is not really the case.

For those wondering if anyone would buy the LM350, we’re told that demand for it has been strong in all the markets where it is sold and there are more than 12 Malaysian customers who are waiting for delivery of their MPV. 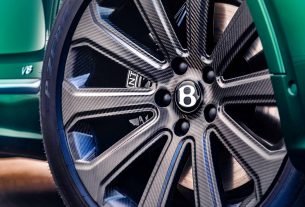 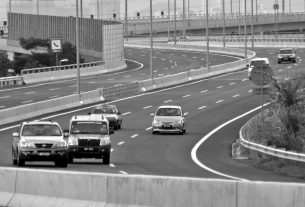