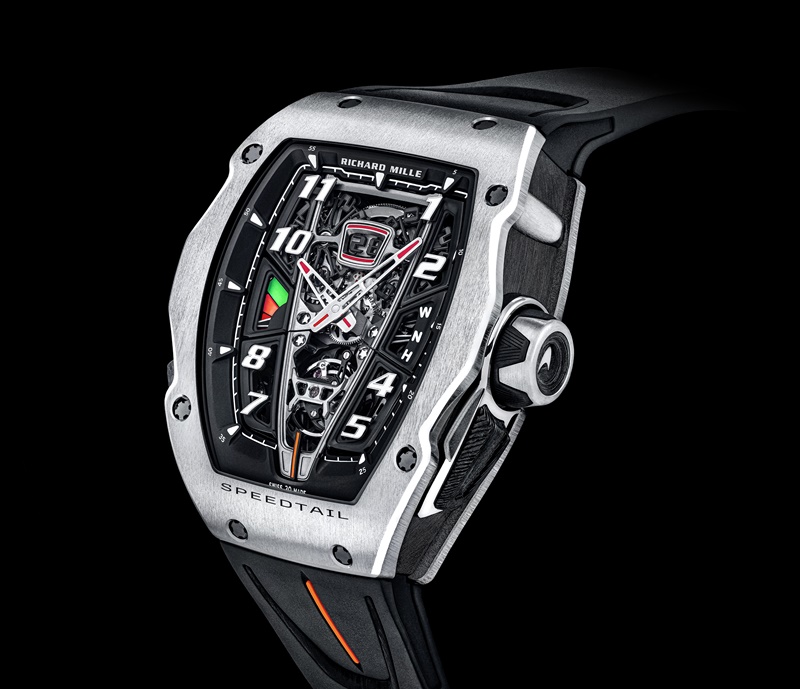 McLaren Automotive and Richard Mille, the Swiss watchmaking brand, have had a partnership since 2017 and to mark the beginning of the fifth year of that relationship, they have revealed their latest and most ambitious collaboration to date – the RM 40-01 Automatic Tourbillon McLaren Speedtail.

As the name suggests, this watch is associated with the futuristic looking Speedtail model – the fastest, most advanced and most exotic road car McLaren has yet produced. Only 106 cars will be produced, and mirroring this, only 106 RM 40-01 Automatic Tourbillon McLaren Speedtail watches are planned.

Based on the form of a teardrop, the most aerodynamically efficient shape found in nature, the 3-seat Speedtail is the ideal form for a streamlined hypercar. With its 1,070-bhp hybrid powertrain, the Speedtail can cover 112 metres per second when travelling at its top speed of 403 km/h, making it the fastest McLaren road car to date. 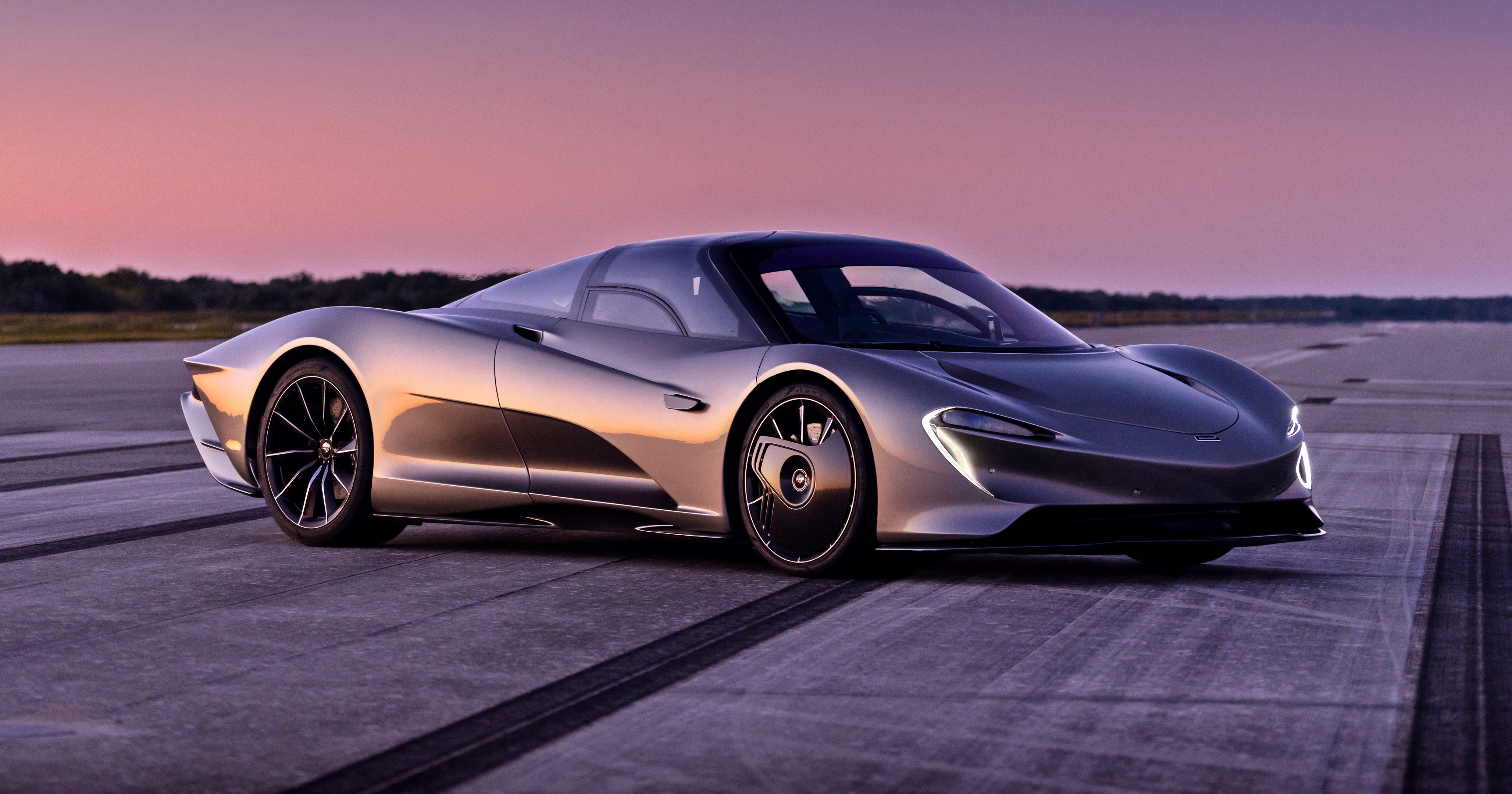 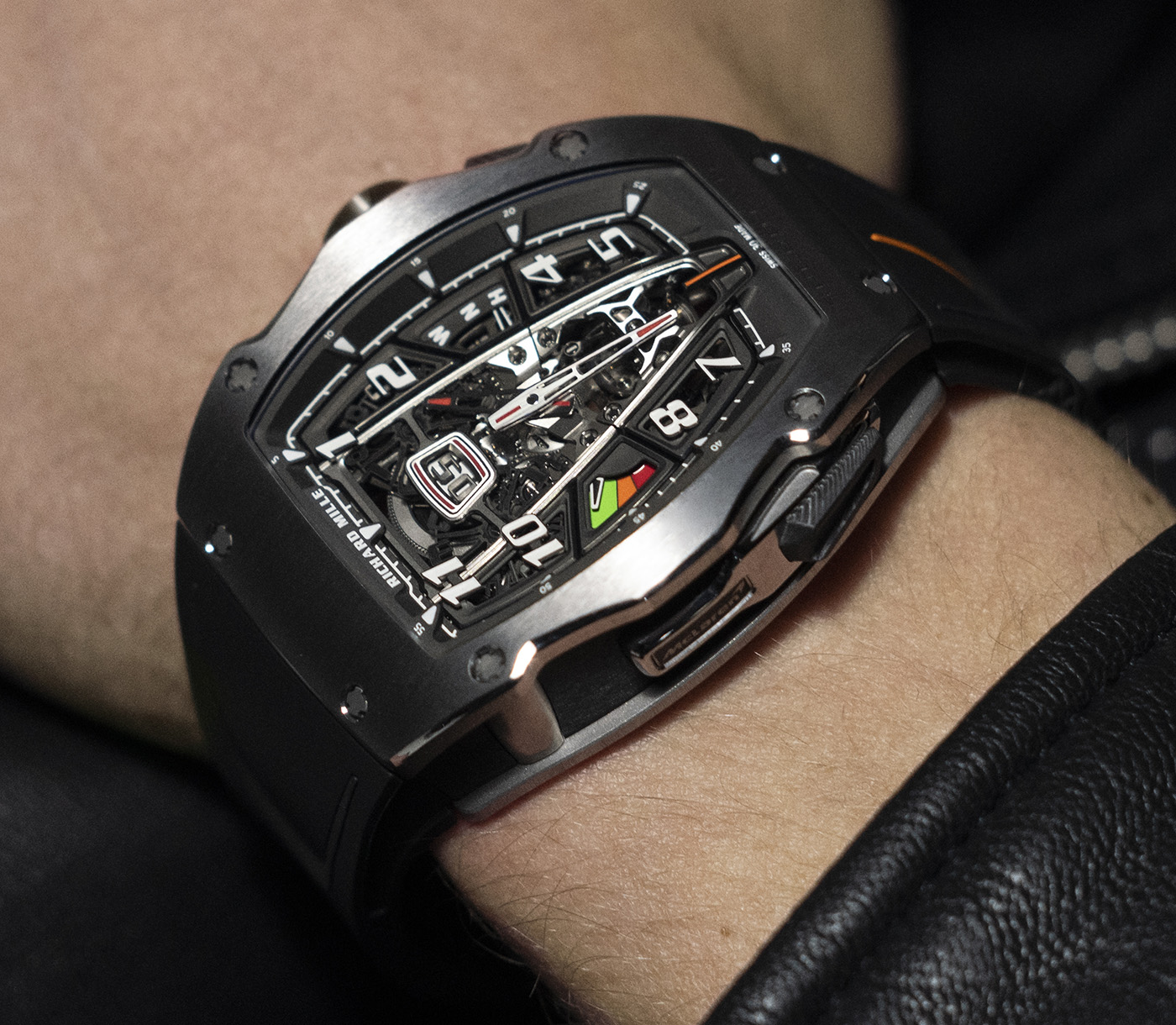 “When it came to the RM 40-01, we had considerable input in sharing the highlights of the car and the philosophy behind it. With the Speedtail, we set out to produce a car that had an artistic quality to it. That has certainly come through in the watch, which beautifully mirrors the many various details of the Speedtail in its finish, materials and its uncompromising design,” said Rob Melville, McLaren Automotive’s Design Director.

“There are many similarities between the way that Richard Mille and McLaren approach common design and engineering challenges, such as saving weight, reducing vibrational impact and minimizing resistance,“ he added.

Like the Speedtail on which its based, the watch’s lines mimic the form of a water droplet while bezel indentations evoke the bonnet openings, and pushers that recall the air outlets behind the front wheels. 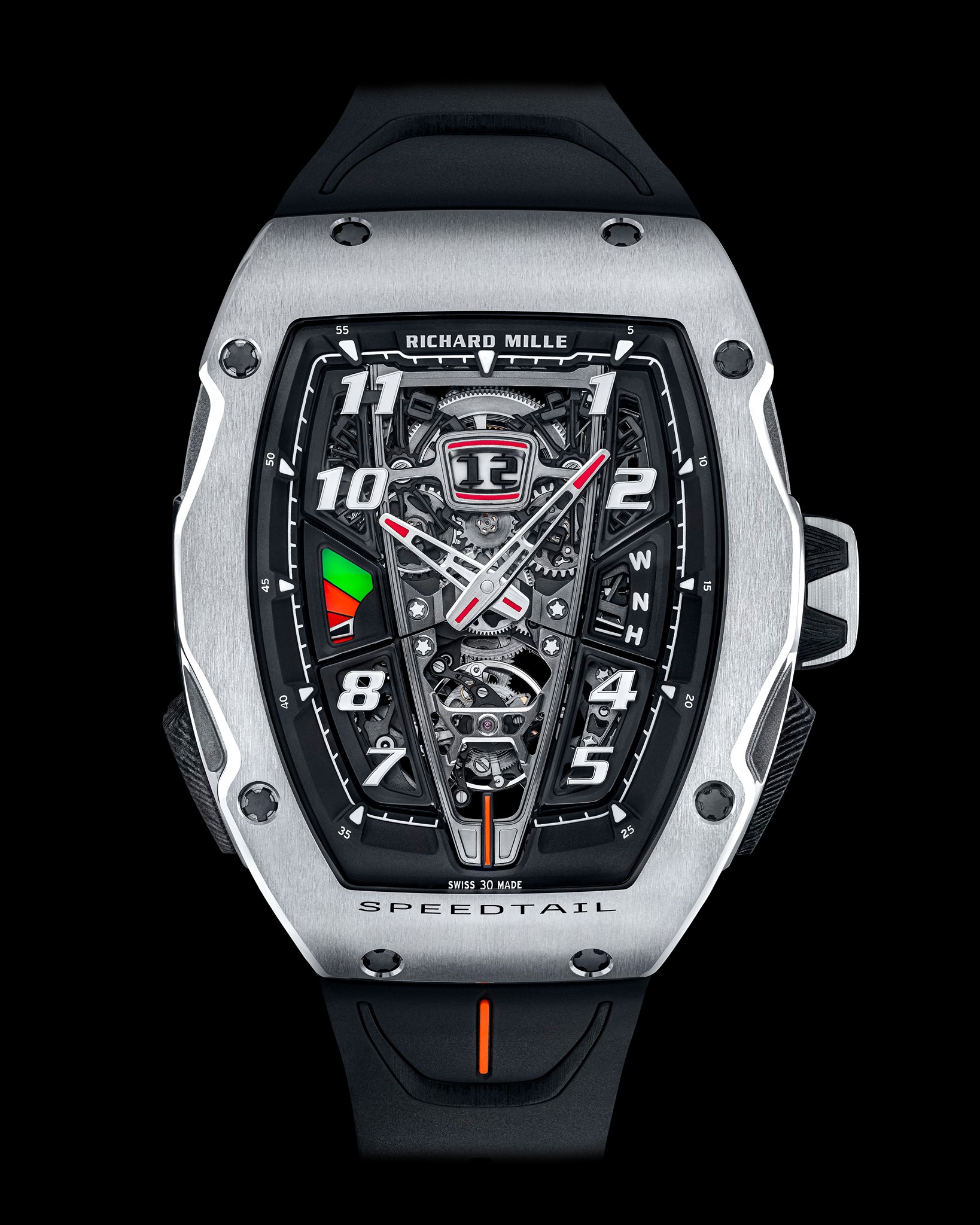 Extreme attention to detail
“The watch has one of the highest levels of finishing ever executed at Richard Mille. There has also been a lot of development with our anglers and polishers. The attention to detail is extreme, with mirror polished, plain and satinised effects in different areas and the combined use of titanium and Carbon TPT. The case itself is made from 69 individual parts,” explained Technical Director Julien Boillat.

Due to the unprecedented complexity of the design, 5 prototypes were created before the optimum shape was achieved. The challenge lay in the fact that the case is significantly wider at 12 o’clock than at 6 o’clock, with a further taper between the titanium bezel and case back, which are separated by a caseband made from Carbon TPT and unequal length titanium pillars. 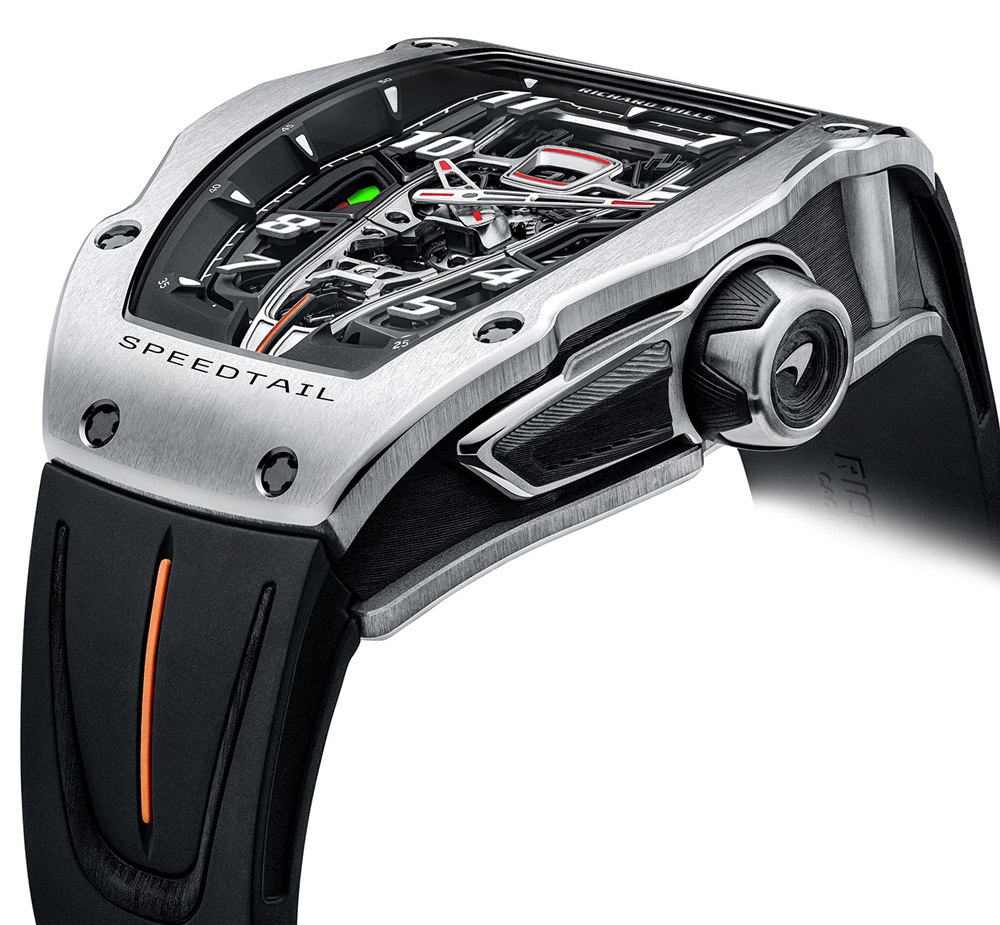 Unique strap design
To protect the RM 40-01’s state-of-the-art movement, Richard Mille developed a unique upper crystal featuring a ‘triple contour’ to account for the decreasing taper and thickness of the bezel. It alone took 18 months to perfect. The strap is also a unique design, being asymmetrical and with the rubber version using Vulculor technology from Biwi SA. This has a special process that enables coloured rubber to be over-moulded – so allowing the iconic McLaren orange accent coloured stripe seen at 6 o’clock on the movement to extend to the wrist. 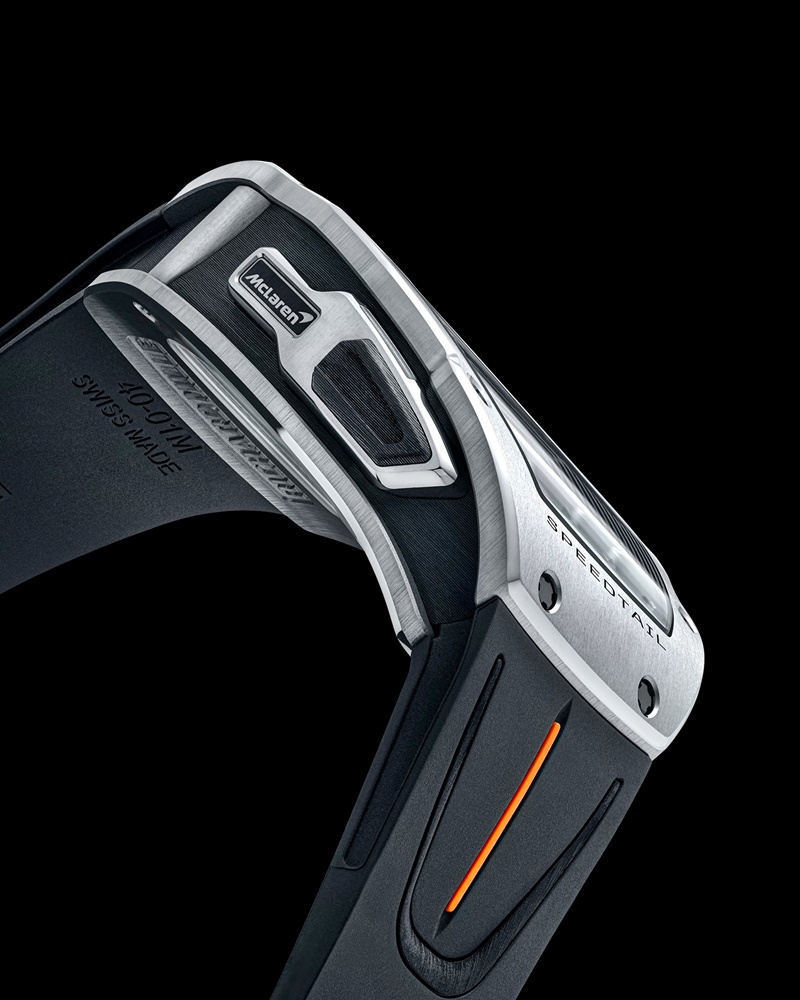 Despite the extraordinary anatomy of the case, a horological ‘engine’ was created that seamlessly occupies all the available space and introduces a level of mechanical sophistication that makes the RM 40-01 Automatic Tourbillon an appropriately extraordinary companion to the Speedtail. Grade 5 titanium has been used for key components such as the bridges, the bridge screws, the baseplate and the rotor core. The CRMT4 movement that drives the RM 40-01 introduces the mechanism’s first power reserve display as well as the oversize date and function selector complications, all of which are firsts at Richard Mille for an in-house tourbillon.

In the pursuit of perfection, three power reserve systems were developed before the definitive version was arrived at which is integrated into the watch. The entirely new movement architecture demanded a remarkable 8,600 hours of development, much of which went into finalising the extreme level of detail. 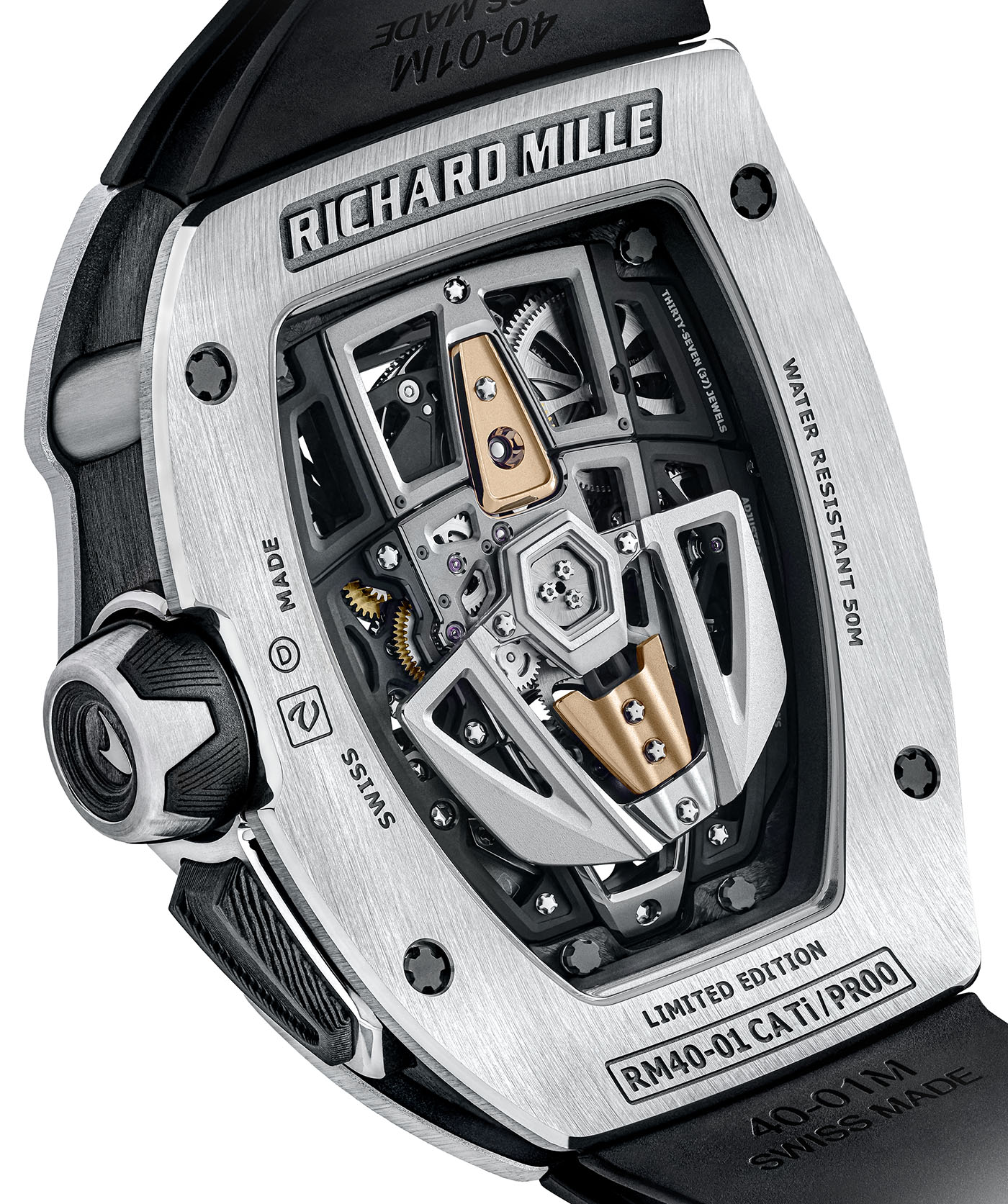 An often-forgotten detail, the finishing is applied not only to visible parts but also to parts that are hidden, such as the lower component surfaces. Some wheels are machined with the famous iconic McLaren logo that adorns the bonnet of the Speedtail, while the domed parts usher in new surface profiles that were required to translate the car’s curves.

Design elements from hypercar
The platinum and red gold winding rotor is inspired by the Speedtail’s bonnet and the barrel-setting by its roof line. The gentle, downward curve that the mechanism follows from 12 o’clock to 6 o’clock recalls the brushed metal divider between the car’s cockpit and its bodywork. An orange line running from the lower part of the movement and on to the strap mimics the vertical stoplight mounted in the Speedtail’s rear screen. 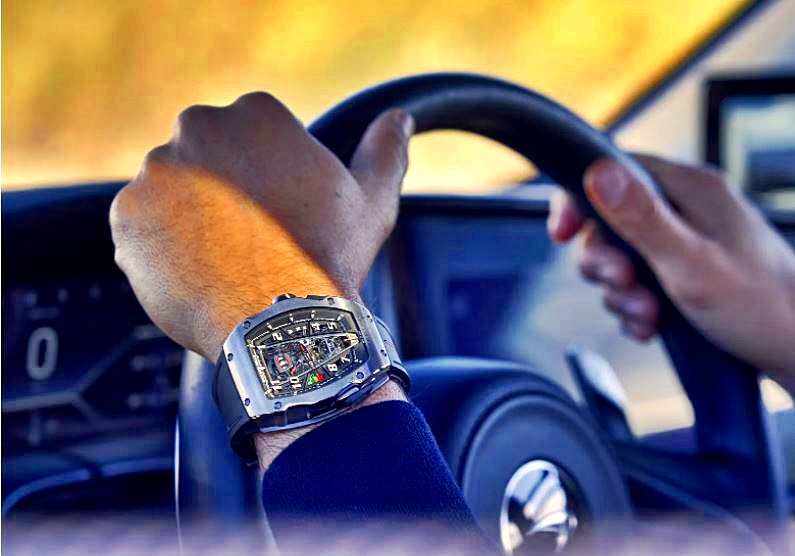 The price of the latest watch has not been announced but the McLaren watch range has prices which start from around US$100,000 (about RM412,000) and the most expensive model is believed to cost around US$2.81 million (around RM11.6 million). Of course, that sort of price won’t bother someone who has a Speedtail which has a price starting from US$2.46 million (about RM10.2 million). 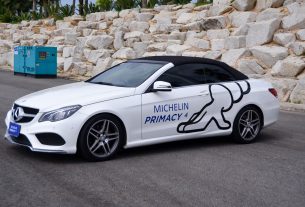 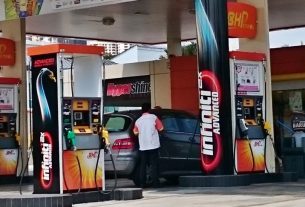 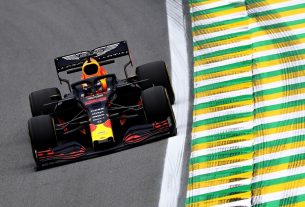