Run-flat tyres, though seemingly a recent development, have been around since the 1930s although they were not as commercialized like today. From the 1980s onwards, most of the major manufacturers developed tyres that could continue to be used even when the air pressure was lost due to a puncture. This capability was initially required for military vehicles as well as vehicles carrying important people that might be attacked.

Eventually, run-flat tyres entered the market and appealed to carmakers because they not only provided extra safety and convenience but also gave the possibility of leaving out the spare tyre and saving some weight. Of course, due to the technology they have, they are more expensive than normal tyres but are an acceptable extra cost for premium luxury models.

Keeping rallycars running
At Pirelli, development of run-flat tyres began in the 1990s, mainly to provide tyres for rally drivers to continue even with a puncture, rather than being stranded by the side of the road. New technology was tried and tested in rallies by teams associated with the tiremaker. These had a reinforced structure that mad the tyres stronger and able to still run for several minutes after air was lost. In competition, those few minutes made a big difference.

Improvement in comfort for road use
Nevertheless, Pirelli carried out R&D into new materials and processes to improve comfort and also other aspects such as grip and handling. Thanks to new technology in the tyre’s structure as well as advances in the materials used, the way that the tyres absorb bumps in the road has been refined over time, to the point that they can now offer the same levels of comfort as standard tyres. To use run-flat tyres, engineers have to tune the suspension of the cars accordingly.

The key advantage of having a run-flat tyre is that the driver does not have to stop and change to the spare tyre when a puncture occurs. It is possible to continue for some distance, at least to a tyre shop where the puncture can be fixed or the tyre replaced. However, there are speed limitations (around 80 km/h) and the tyre is intended for emergency use and not long-term use.

Original fitment by many carmakers
Over the last 20 years, Pirelli’s engineers have developed more than 1,000 different types of tyre featuring run-flat technology of different sizes and seasonal applications. To date, the company has supplied more than 70 million run-flat tyres, mostly as original fitment on models by BMW, Mini, Mercedes-Benz, Alfa Romeo, Audi and others.

Good for EVs
Run-flat tyres are also of interest to manufacturers of electric vehicles, which still need tyres to run on. Being able to leave out the spare tyre or even not have to carry a repair kit can mean less weight on board and that can help in adding to the cruising range. Additionally, the space that is usually allocated for a spare tyre can be utilized for the battery pack.

Run-Flat technology will therefore also play an important role in electric vehicles as well as autonomous vehicles, the latter by helping the vehicle remain under control even in an emergency situation.

Some of the Pirelli run-flat tyres include Pirelli Elect and PNCS noise-cancelling technology. The former is dedicated to electric vehicles and is focussed on low rolling resistance, reduced tyre noise, immediate grip, and a structure that can support the weight of a battery-powered vehicle. PNCS is focussed on reducing perceived tyre noise inside the cabin, thanks to the use of special sound-deadening material on the inside of the tyre. 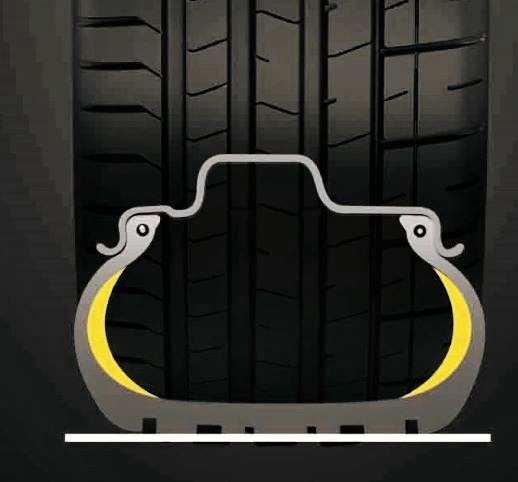 So long as motor vehicles run on wheels, tyres will be needed and run-flat technology will remain an important element. Pirelli continues to improve its run-flat tyre range as new technologies become available and affordable, with a view of future requirements by the industry and motorists.