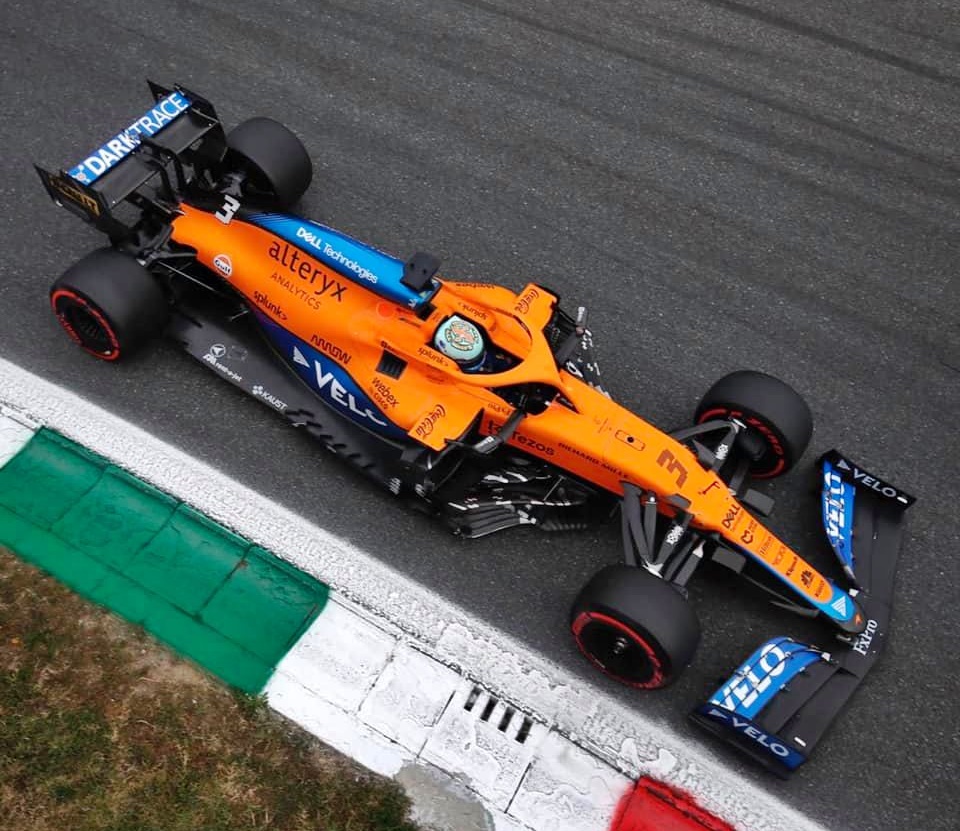 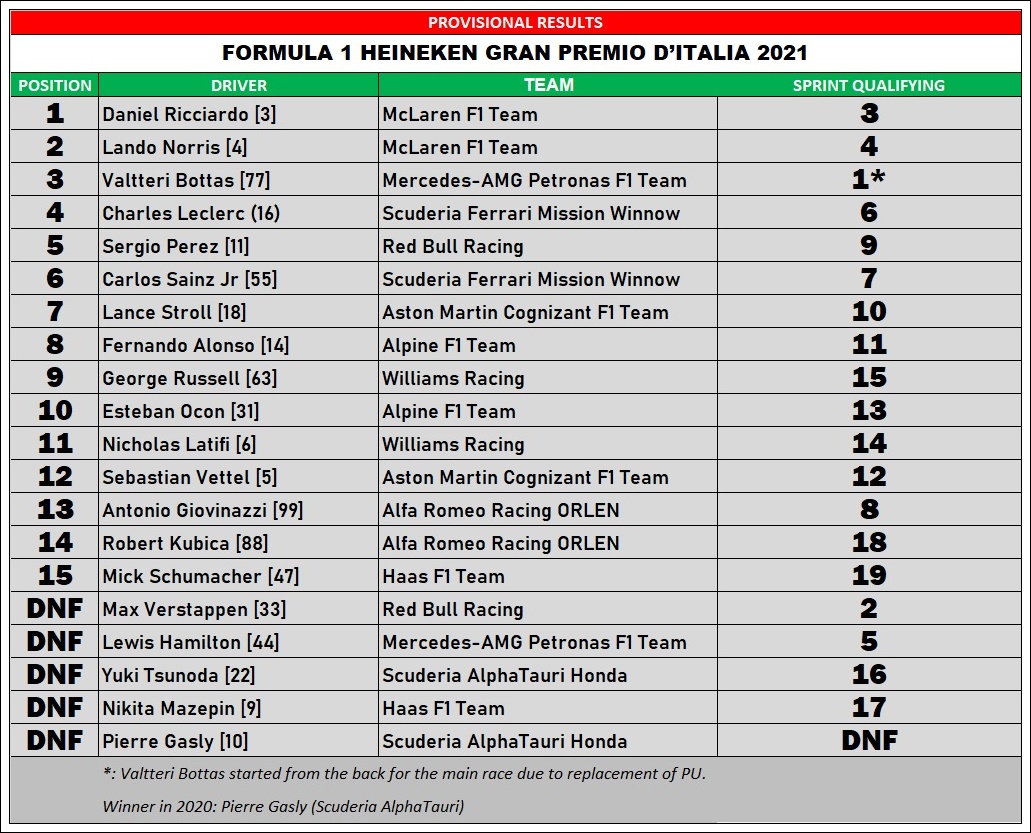 Although Valtteri Bottas had won the Sprint Qualifying race – which determines the starting order for the main race – he had to start from the back as he had a Power Unit replaced and regulations require that penalty. So starting from pole position was Red Bull Racing’s Max Verstappen who got a good start at first, but was then overtaken by McLaren’s Daniel Ricciardo at Turn 1 who took the lead.

Lewis Hamilton, after the fumble at the start of the Sprint race, was determined not to make mistakes again and started off from fourth place very aggressively, He jostled with McLaren’s Lando Norris going into the first turn and was forced onto the grass. However, it was Alfa Romeo ORLEN’s Antononio GiovInazzi who provided the first incident of the race to bring out the Virtual Safety Car when he spun, hot another car and left some pieces of his front wing on the track. 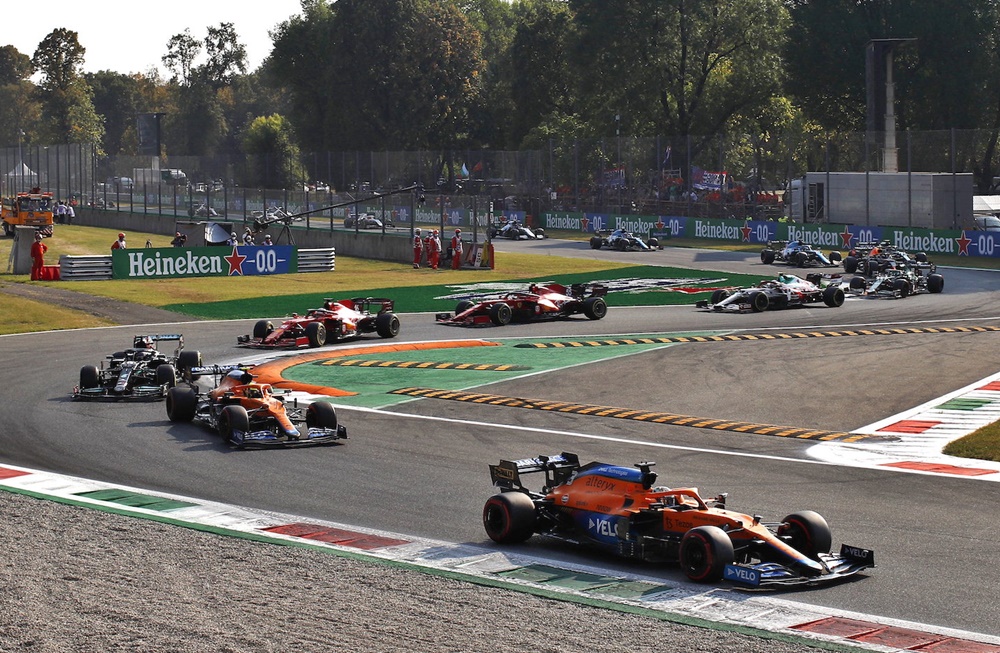 It was a very bad day for the Scuderia AlphaTauri team. Not only was Yuki Tsunoda’s car taken off the grid before the start and pushed back to the pits but his team mate, Pierre Gasly also had to retire after lap 5,a disappointment for the winner of the 2020 race.

It was bad enough that Giovinazzi had spun at the start and had to rush back to the pits and in his haste to get back into the race, he was seen  by the officials to rejoin the track in an unsafe manner and incurred a 5-second penalty.

Bottas had been working hard moving up the field and by the 10th lap, he was around 12th and tangling with Alpine F1’s Esteban Ocon. But it was still some way to go for the Mercedes-AMG driver as he was some 25 seconds behind Ricciardo, the leader. 3 laps later, he was up to 10th where he could start collecting points. 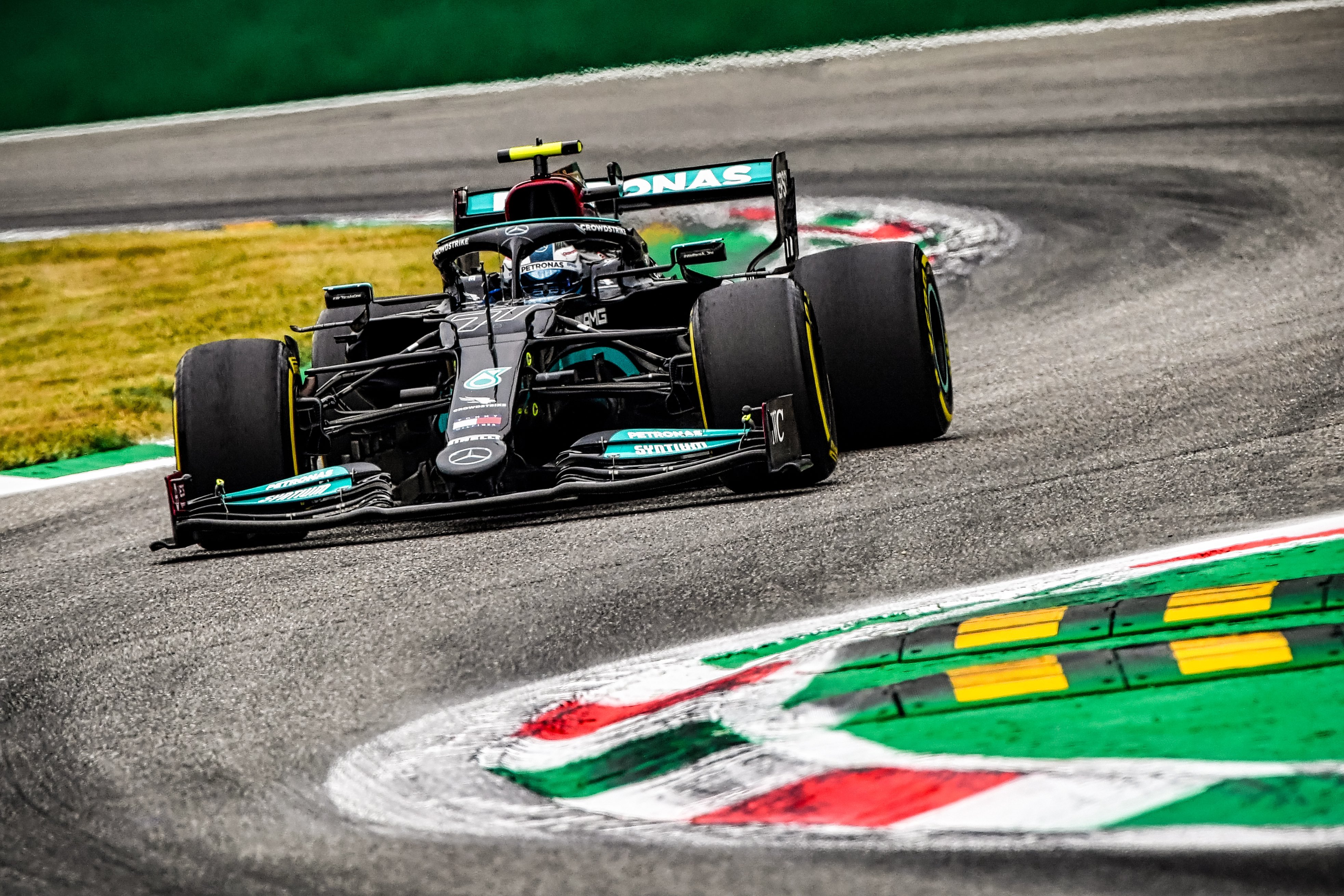 On lap 16, a duel between Aston Martin COGNIZANT’s Sebastian Vettel and Ocon resulting in wheel contact that forced the German driver off the track. The incident was investigated by the officials and would get a 5-second penalty for the incident.

Ricciardo didn’t make it to the halfway mark when he came in for new tyres on lap 23, stopping for 2.4 seconds and rejoining behind Ferrari’s Carlos Sainz in 6th place. 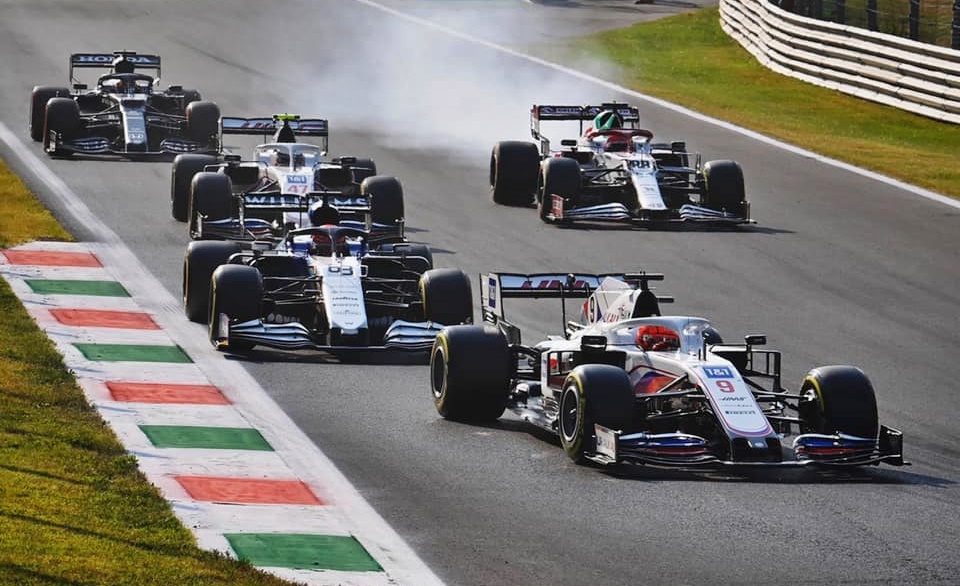 Verstappen came in on lap 24 and it was a disastrous stop which took an agonising 11 seconds, resulting in him rejoining down in 10th place. Meanwhile, Hamilton had managed to get past Norris and take the lead. But Hamilton also needed to change tyres and he had to give up the lead on lap 25.

And then a crazy thing happened – Hamilton and Verstappen crashed at Turn 1! It appeared that while the Mercedes-AMG had rejoined ahead of the Red Bull, Verstappen attempted to get past at Turn 2 and bumped into Hamilton’s car and took off. When the dust settled, the Red Bull was on top of Hamilton’s car. The Safety Car raced out and the other drivers took the chance to come into the pits. The incredible incident meant that Ricciardo got to lead the race. 27 laps had been completed. 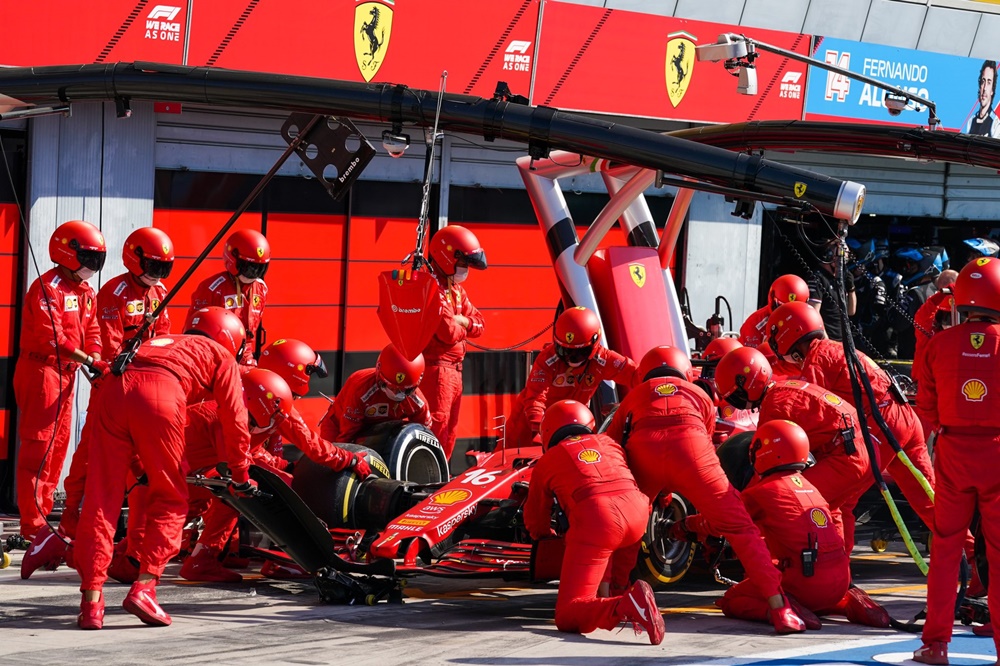 When the Safety Car withdrew, Ricciardo raced off as quickly as possible with Ferrari’s Charles Leclerc and Norris on his tail. Then it was two McLarens in the lead as Norris managed to get past Leclerc. Meanwhile, Bottas was up to 4th on lap 34 so the Mercedes-AMG team still had a chance of a victory. Then again, another Red Bull too was positioned just ahead and also hoping for the same ending.

12 laps from the end, word from the McLaren team to the drivers was to play it safe and not have something sill happening like Norris knocking out his own team mate and losing the chance for a 1-2. Norris’ job would be to defend Ricciardo from Sergio Perez.

Haas F1’s Nikita Mazepin got a 5-second penalty for the spin he caused team mate Mick Schumacher, and then his own car came to a standstill on lap 44, bringing out the Virtual Safety Car to disrupt the race for short while as marshals for the car off the track.

With 5 laps remaining, the two McLarens had just a slight edge but both Perez and Bottas were still too close for them to feel confident of taking a 1-2. Until Ricciardo passed under the chequered flag, anything could happen. But nothing happened and the two orange cars raced across the finish line. Bottas put in a great effort, having started from the back to finish in third as Perez, though finishing in that position, had a 5-second penalty to drop him down. 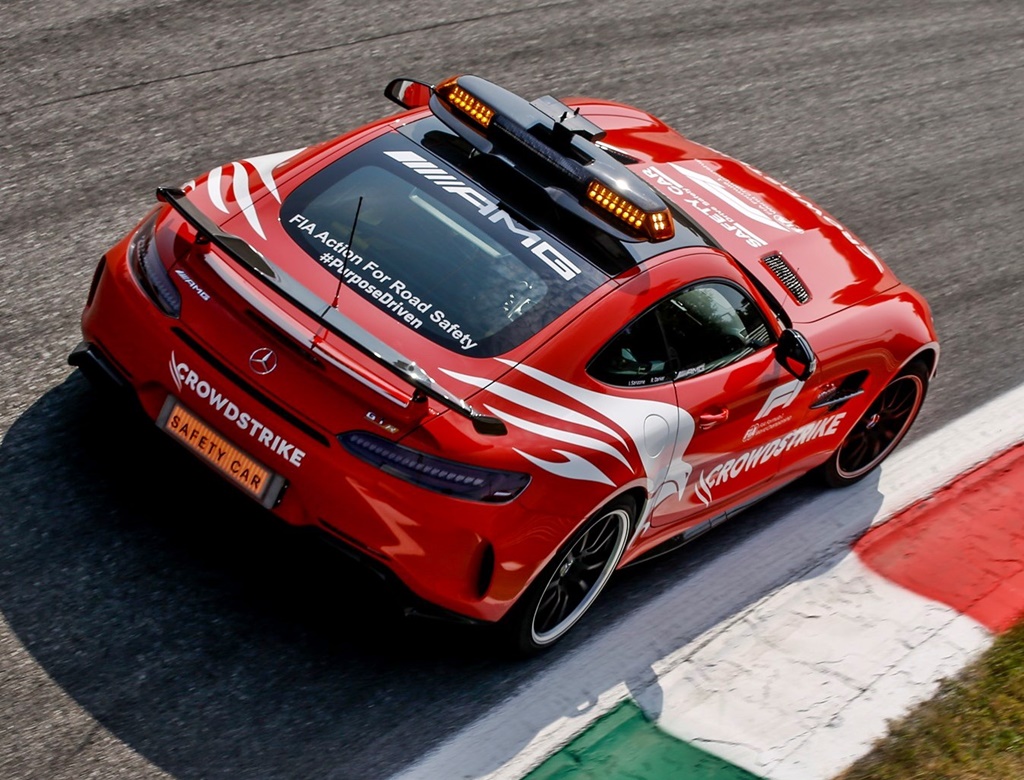 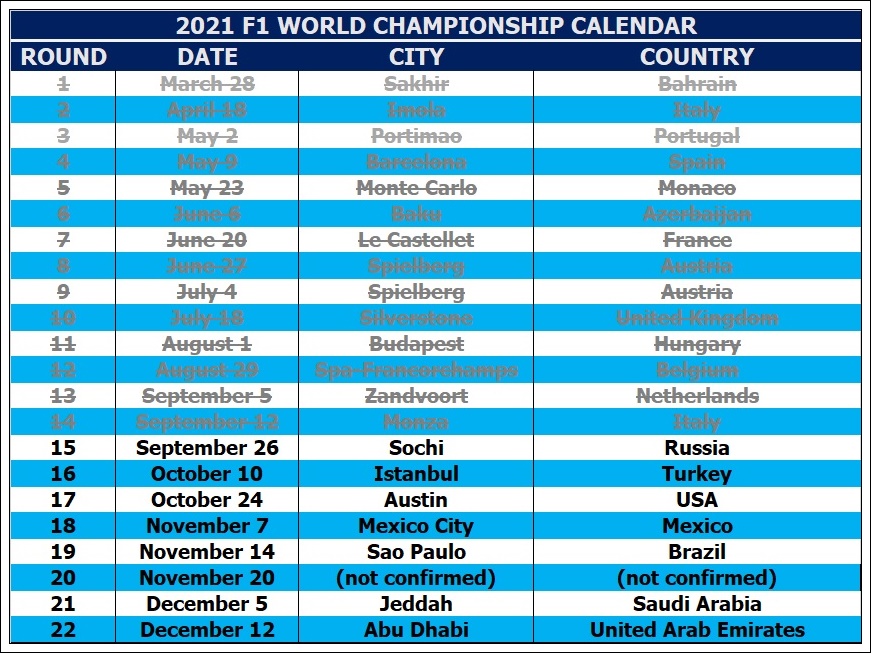