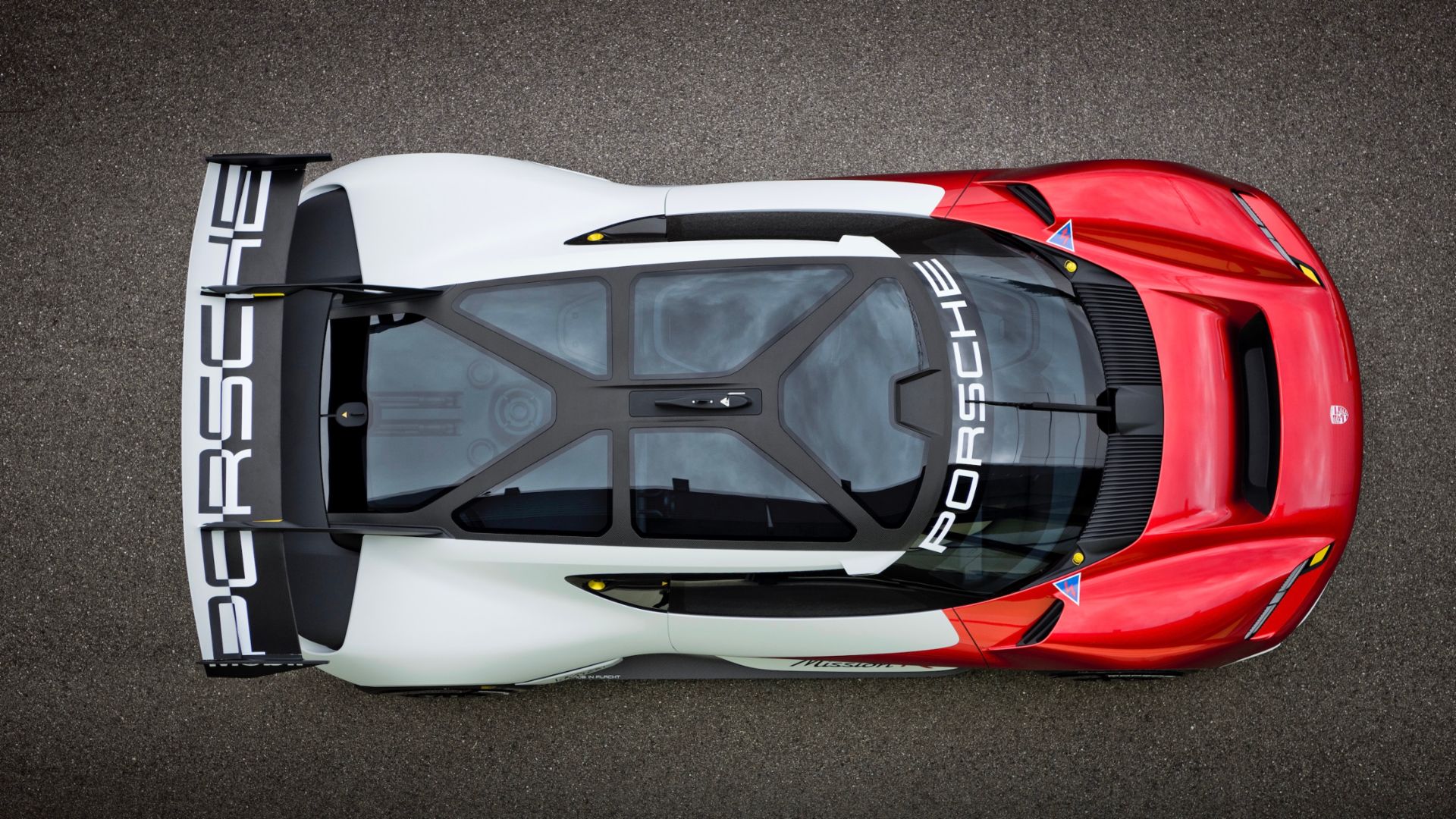 Even before e-sports or digital motorsports, as the FIA has termed the activity, started to increase to the popular levels of today, carmakers were already using simulators for drivers to train in as well as being a tool for engineers. Time spent in the simulator helps a driver prepare virtually for the next race and become familiar with the environment.

Simulators are usually standalone machines with sophisticated computer hardware and software. But in future, it may be possible to have the simulator as a module which can be used for training and then installed in the car for an actual race. 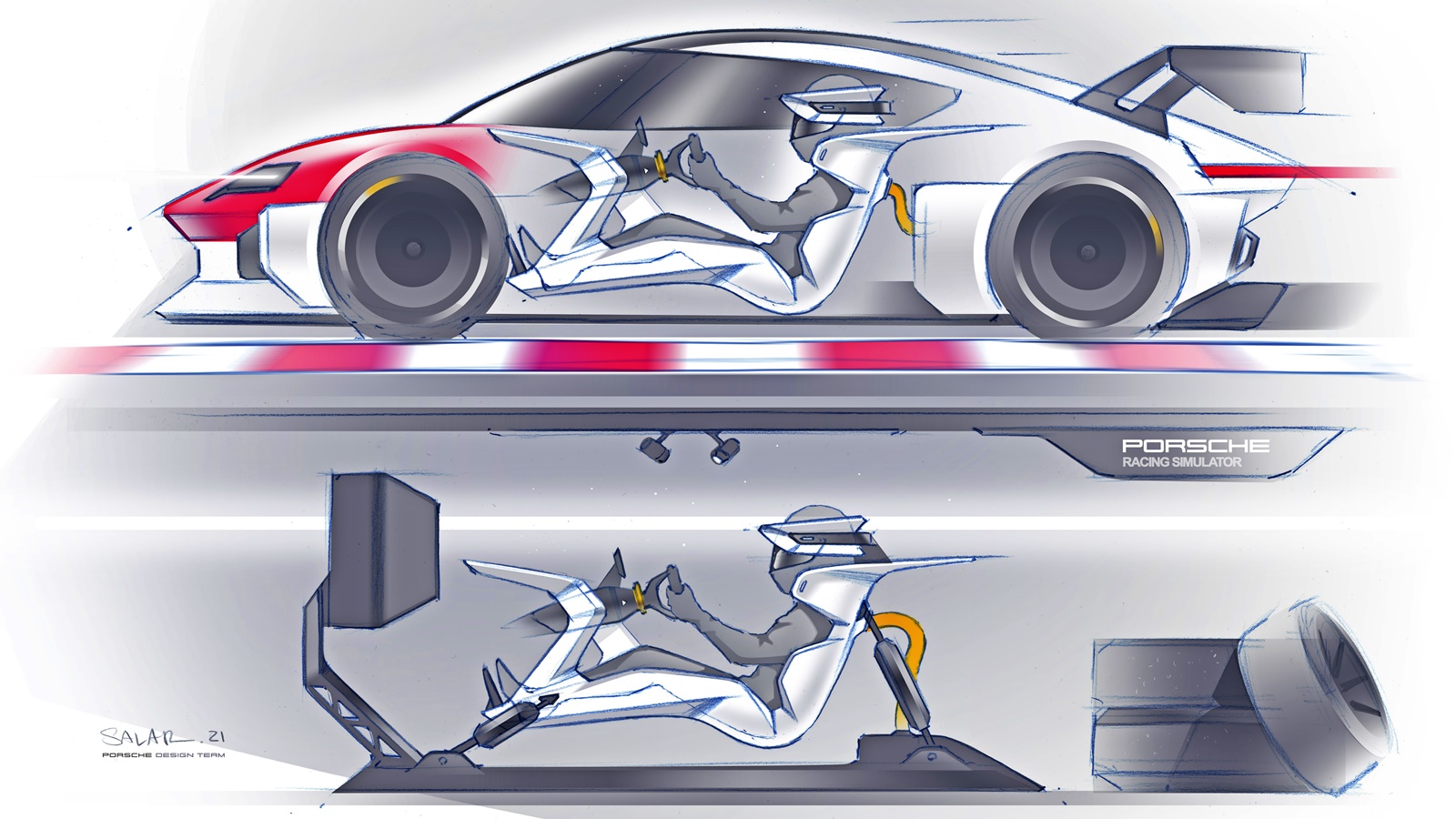 The seat, steering wheel, controls, adjustable pedals and screens form a compact and lie on the same axis as the driver. This allows the driver to concentrate on essentials during the race. At the same time, this driver module design enables a second driver’s cell to be used outside the Mission R as a racing simulator. 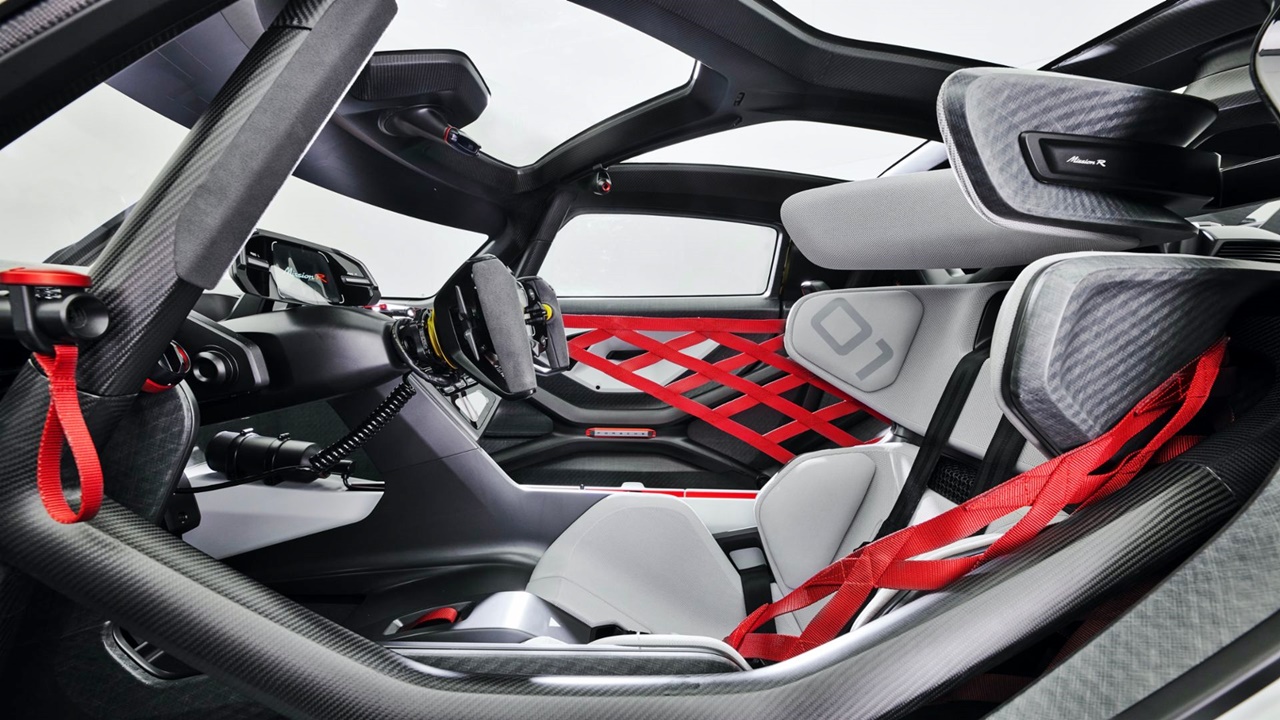 With the aid of movable, electrically controlled supports, the dynamic forces that impact on the driver can be simulated – when braking, for example, or as a result of rolling motions during fast cornering. Due to the familiar surroundings with identical display and control elements and the same full bucket seat, this kind of training can be extremely realistic and highly effective.

3D-printing for racing seat
The full bucket seat offers high protection potential for the driver. At the same time, it has an innovative design and is produced in part using additive manufacturing processes known as 3D-printing. The seat shell is made of the same natural fibre-reinforced material as the add-on parts in the exterior. The centre section of the seat, ie the cushion and backrest, is partly produced by a 3D printer. 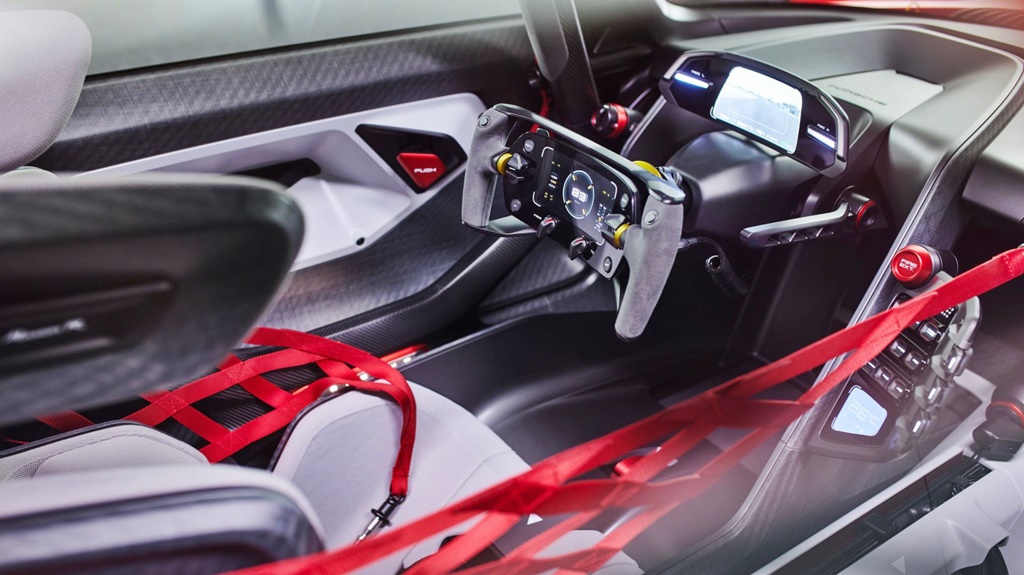 Available from Porsche Tequipment
Porsche initially showed this alternative to the conventional upholstery used for bucket seats as a concept study in 2020 and conducted trials with selected customers during a test phase. As part of the new Performance Parts range, the 3D-printed bodyform full bucket seat is now available from Porsche Tequipment for all 911 and 718 models for which the current full bucket is offered.

In the Mission R, the driver’s seat is actively ventilated and upholstered in a breathable fabric that is made using a resource-saving 3D knitting process. The 3D-printed lattice structure also contributes to a good seat climate. These black, coarse-meshed elements are located in the area between the cushion and the backrest. 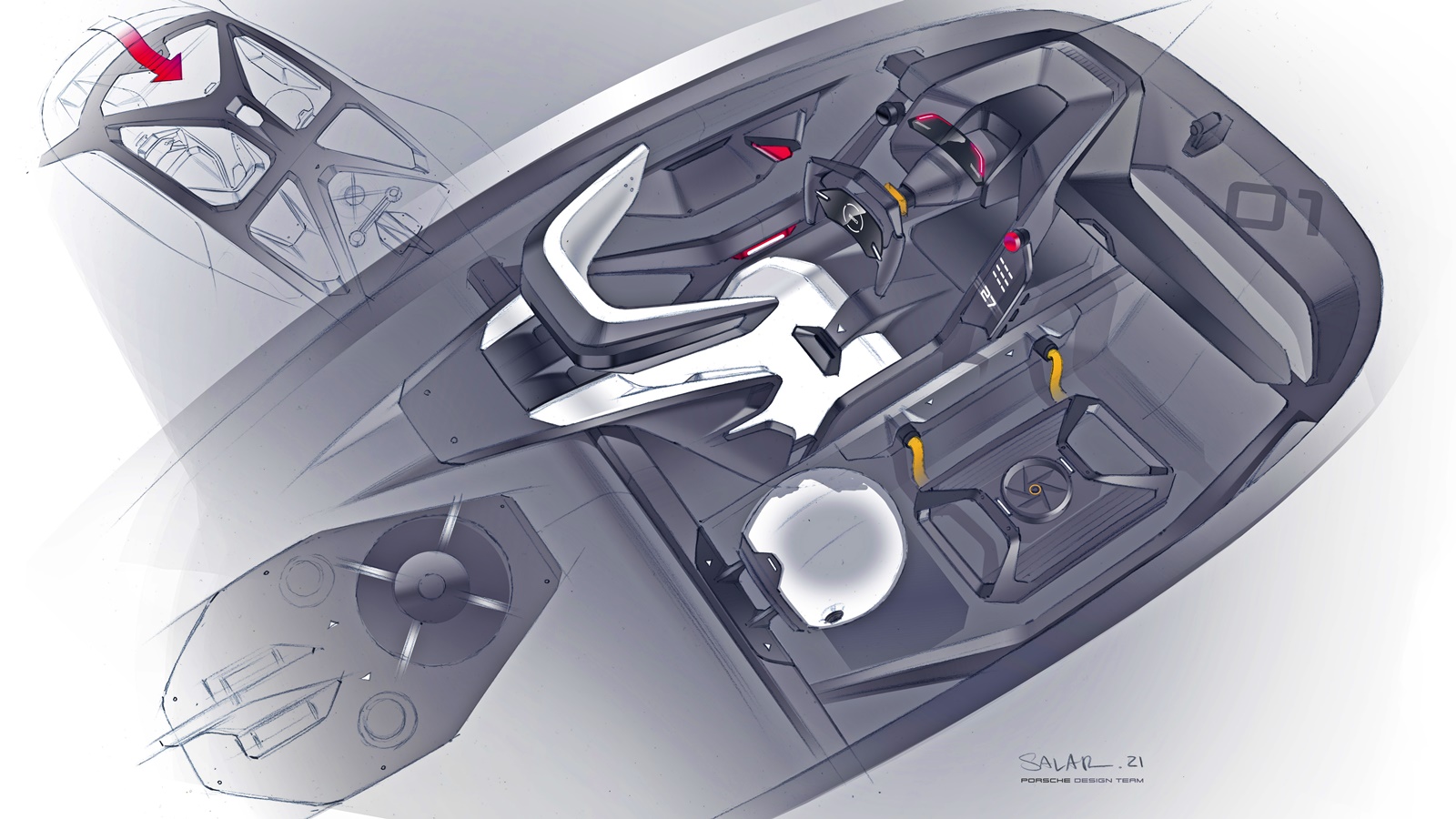 Maximum driver focus
The key displays and controls are located along the same axis. This reduces distraction and helps the driver to improve performance by speeding up their reaction time. The information is hierarchically clustered into three levels. Top priority is given to the 6-inch multifunction OLED racing display. It sits directly between the steering wheel controls and, as such, is placed in the driver’s immediate field of vision. This is where key data such as speed, lap time, tyre pressures or State of Charge (SoC) are displayed, along with information on ABS and traction control.

A second screen is mounted on the steering column behind it. Its curved shape is reminiscent of the Taycan’s large central display. This is where the images from the two exterior cameras are combined into a single image. Through this digital rear-view mirror, the driver can see what is happening on both sides and behind the racing car. A third, centrally positioned, rear-facing camera is mounted below the rear window.

If radar sensors and cameras detect an imminent collision during the race, the Collision Avoidance System alerts the driver to the danger by means of coloured markings on the edges of the race display. 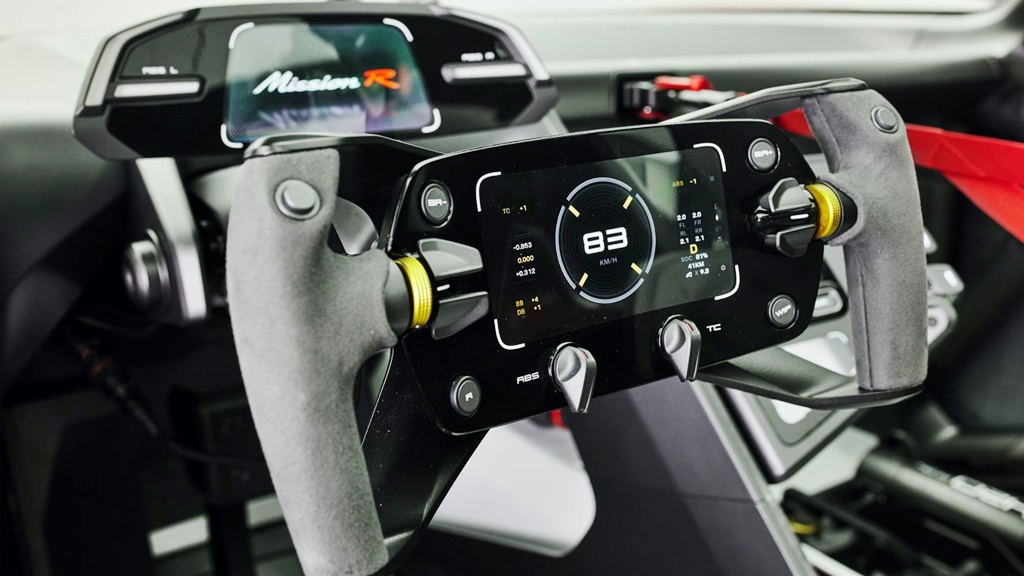 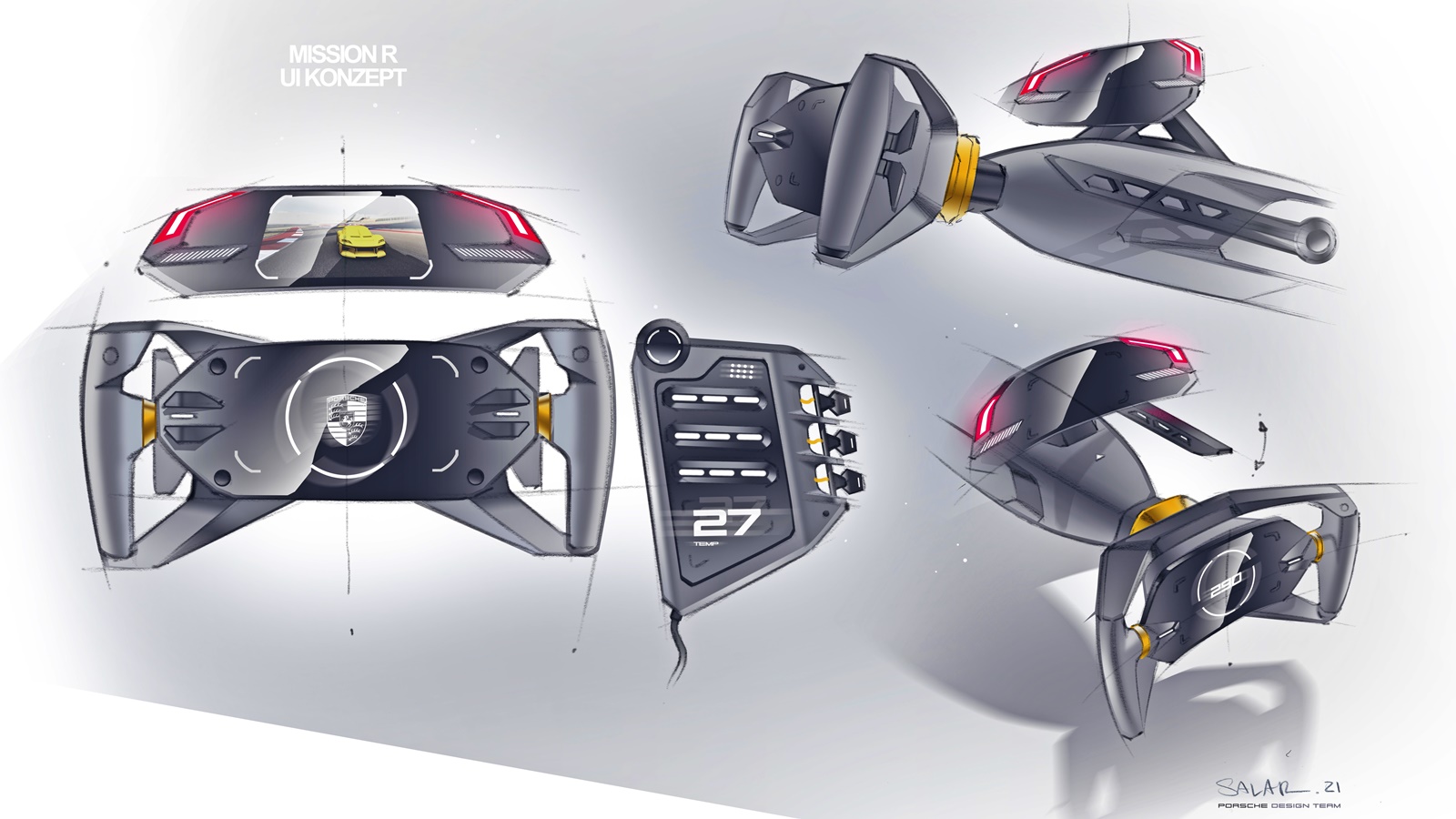 To the right of the driver and inclined towards them is a control panel with buttons and an integrated screen. It represents the third information level. This is where the driver’s biometric data is displayed. This includes body temperature, which is detected by sensors in the seat.

Also fitted are motorsports equipment such as a 6-point safety harness, longitudinally adjustable pedals, safety nets and an extinguisher system. A special feature is the combination of helmet holder and dryer, allowing it to be disinfected and then dried when not being used in a race. No more sweaty helmets after the race! 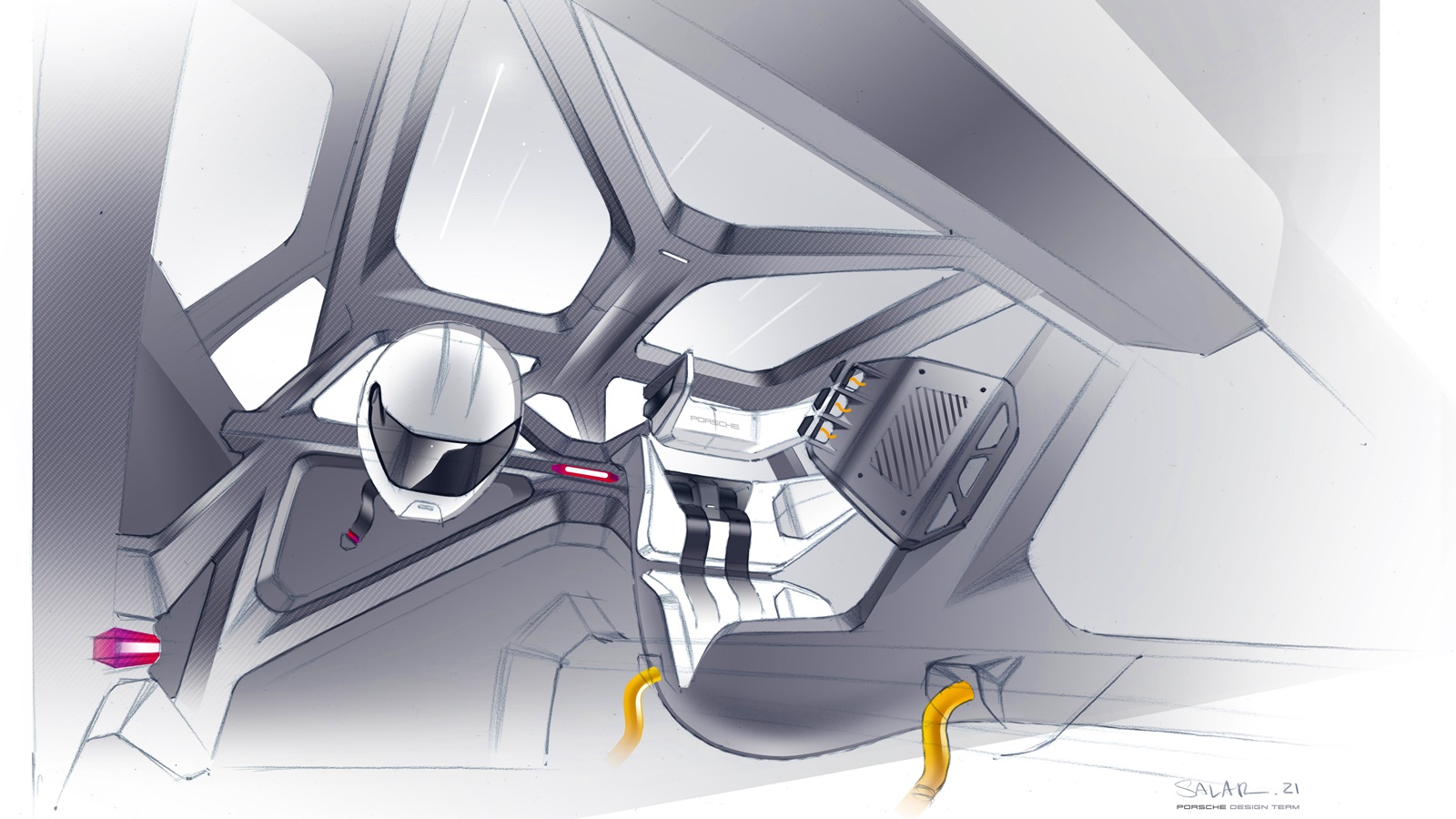 For taxi rides, a second seat can be mounted on the passenger side. The control units, including a cooler, which are combined into one electronic module, are located in the footwell. The driver’s water bottle is also integrated into the seating arrangement. The expansion tanks for battery coolant, brake fluid and dampers are all neatly arranged beneath the rear window.

Livestreaming from the cockpit
The interactive possibilities offered by the Mission R are also aimed at the young and enthusiastic motorsports community. It is set up to provide a livestream broadcast from inside the car, and the driver can connect with their fans at the touch of a button. Fans can in turn communicate directly with the driver, for example, by sending them likes in real time.

Two small cameras mounted on the roof frame and on a rail above the passenger seat can show what is happening inside the car during a race in real-time. The live images can be transmitted directly to the community using a livestream button in the control panel.