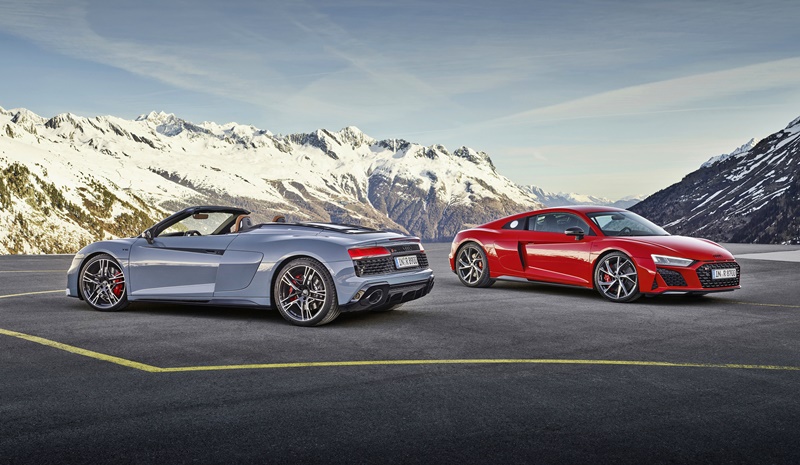 Until the Quattro came along in the early 1980s, Audi was known for its front-wheel drive (FWD) cars and showed no interest in rear-wheel drive (RWD). With the quattro system, the company didn’t have to discuss the merits of FWD or RWD; it powered the wheels at both ends of the car. The quattro system has been synonymous with Audi, an exclusive feature on its high performance models.

But the company has not refused to make RWD cars, except that they have been in small numbers and used in competition. Models like the Le Mans-winning cars with hybrid powertrains have had what is essentially RWD, along with the R8 LMS GT4 used by customer racing teams. There has also been the R8 RWS which was a limited-production run of 999 units and ‘made for purists’. 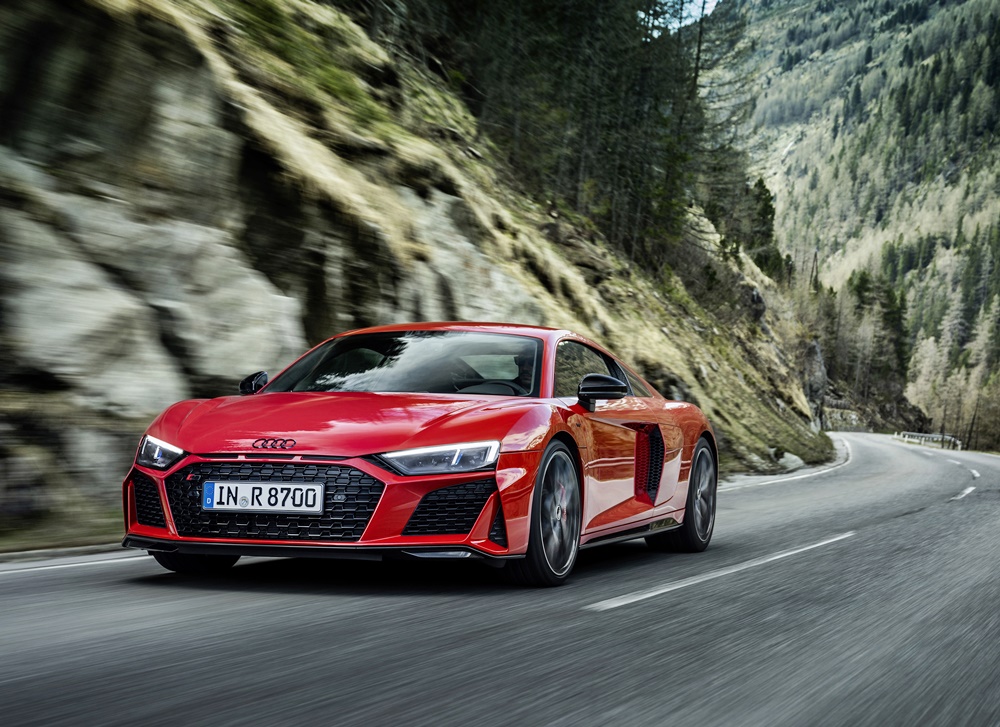 Now, Audi Sport GmbH (which is the company that makes the R8) has come out with a new R8 Performance RWD as a complement to the V10 performance quattro version. It has the same mid-mounted V10 5.2-litre FSI engine with enhanced output of 570 ps/550 Nm to take the car from 0 to 100 km/h in a claimed 3.7 seconds, with a top speed of 329 km/h. Available in Coupe and Spyder bodystyles, it replaces the previous R8 V10 RWD which had served as an entry-level version.

Balanced for rear-wheel drive
The suspension and driving dynamics are specifically balanced for the rear-wheel drive. A mechanical limited slip differential distributes the torque ideally based on the driving situation, ensuring maximum possible traction even when the roads are wet. When Sport Mode is activated in the Electronic Stabilization Control system, the suspension set-up and control systems will allow controlled drifts. 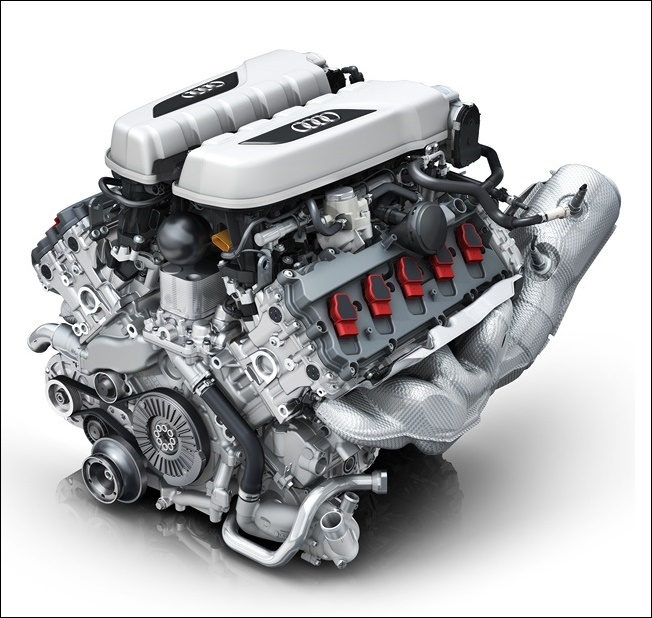 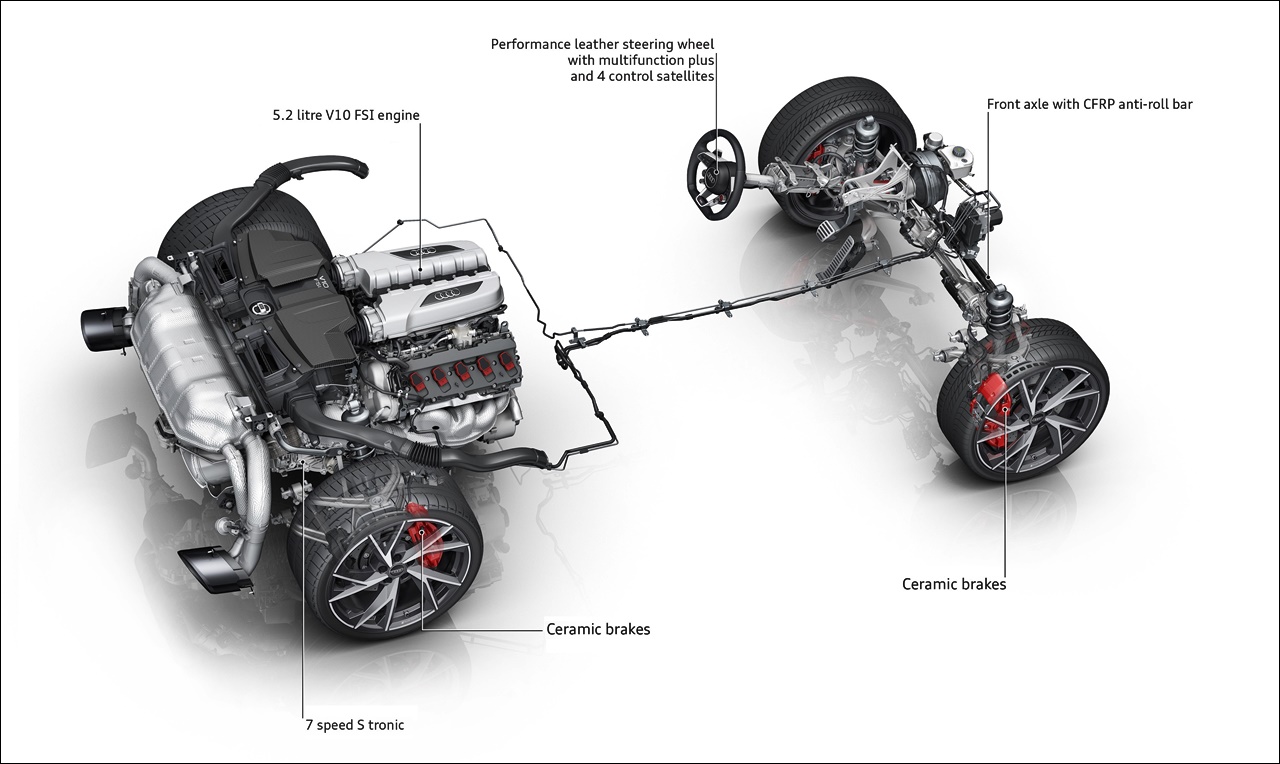 The electromechanical power steering provides has Dynamic Steering, available for the first time for the RWD R8. This provides even more precise reaction and feedback with more direct steering. At the same time, it also increases comfort by making steering easier, such as when parking or manoeuvring. 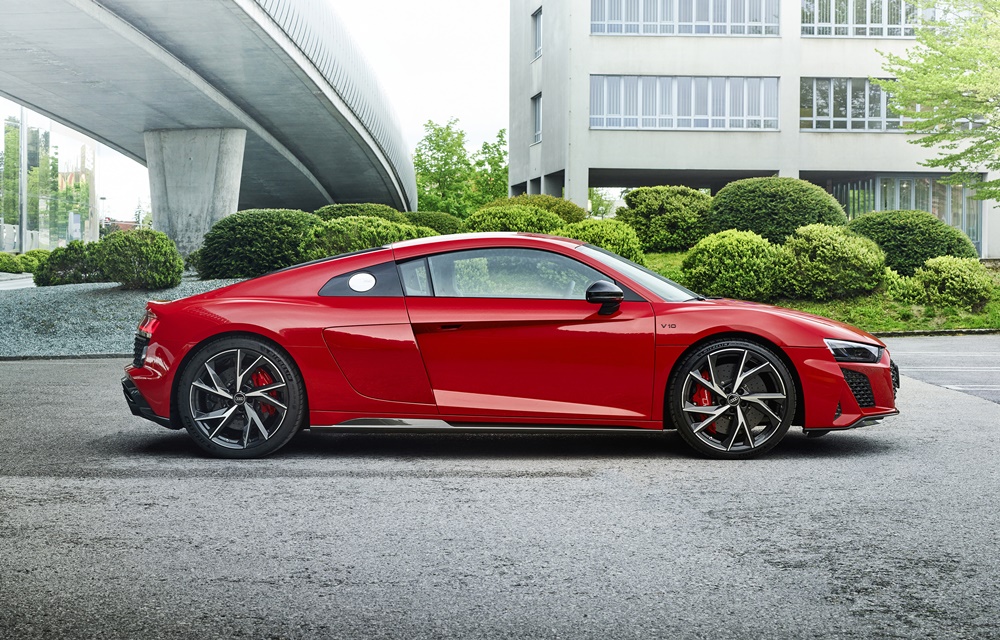 The RWD suspension, with double wishbones and a passive differential lock, is adapted specifically for rear-wheel drive. The weight distribution is 40:60 and extra-light 19-inch and 20-inch aluminium cast wheels are fitted, or optional Cup wheels in 245/30 R20 up front and 305/30 R20 at the back can be specified. An 18-inch high-performance steel braking system with a wave design and an optional 19-inch high-performance ceramic braking system provide the necessary deceleration.

As with all R8s, the body is built of aluminium using the Audi Space Frame (ASF) design which has been around since the mid-1990s. The structure has evolved over the years and large parts are now made of carbonfibre reinforced plastic for more lightening. The Coupe version thus weighs a mere 1,590 kgs, with the Spyder weighing another 105 kgs more. 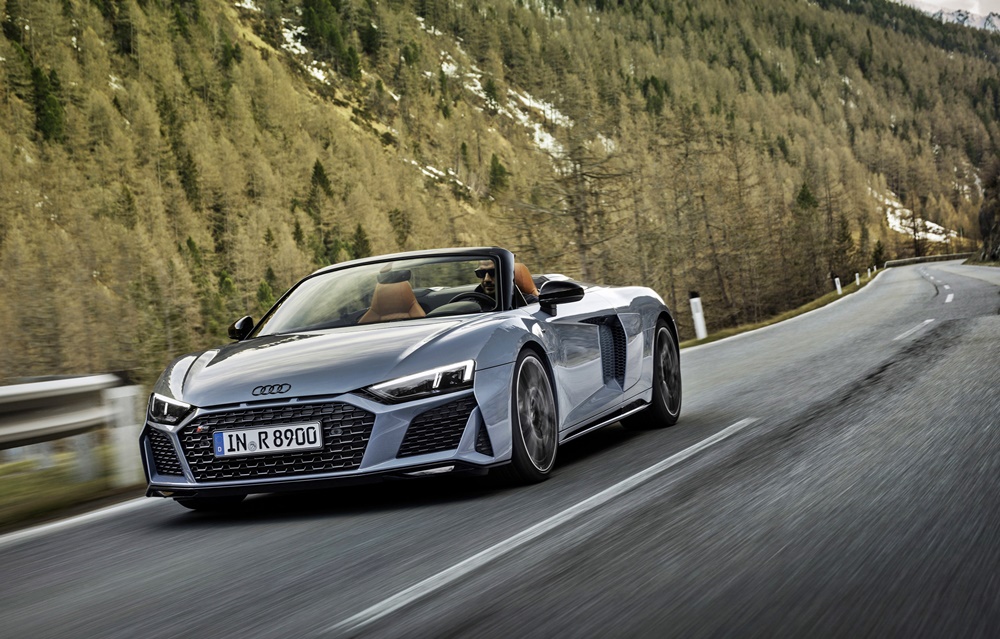 Recognizable design features
The overly sporty design is inspired by its GT4 siblings and elements of this include the broad, flat Singleframe radiator grill in matte black with an R8 emblem. There are also the large air intakes, front splitter and rear air outlet grid as well as the oval tailpipes. Enthusiasts will note that the slit under the front bonnet is reminiscent of the legendary Audi Sport quattro. 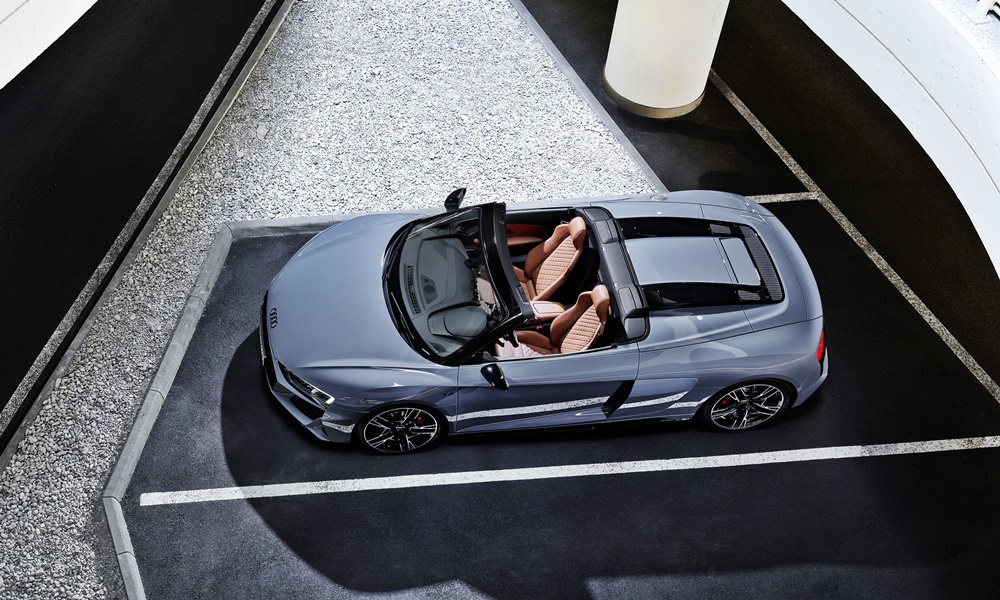 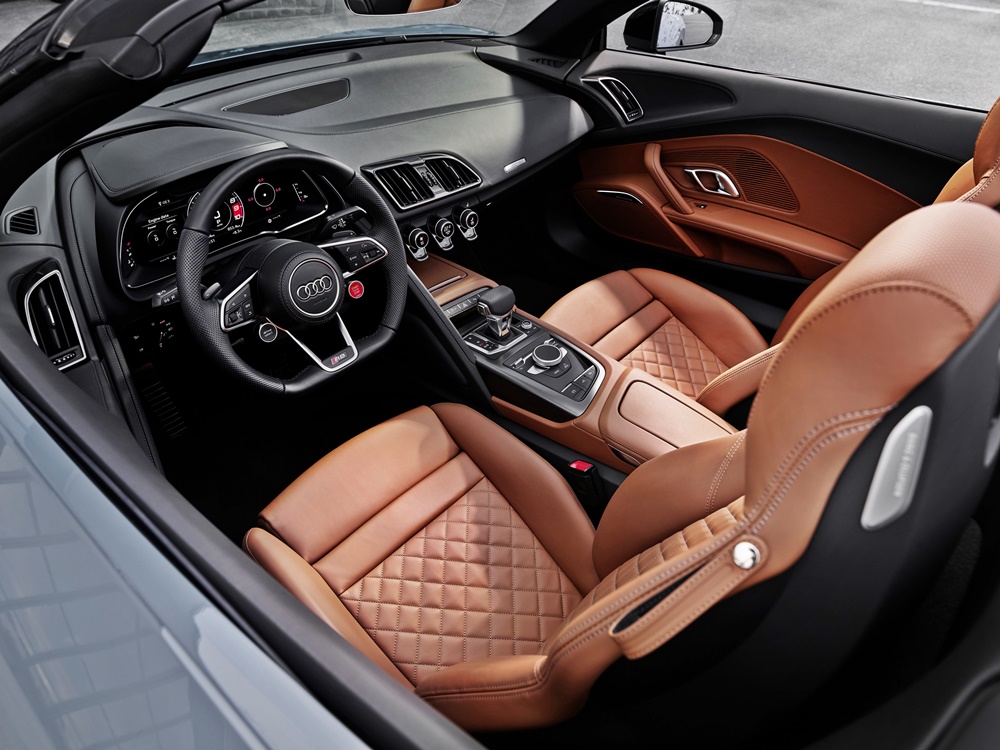 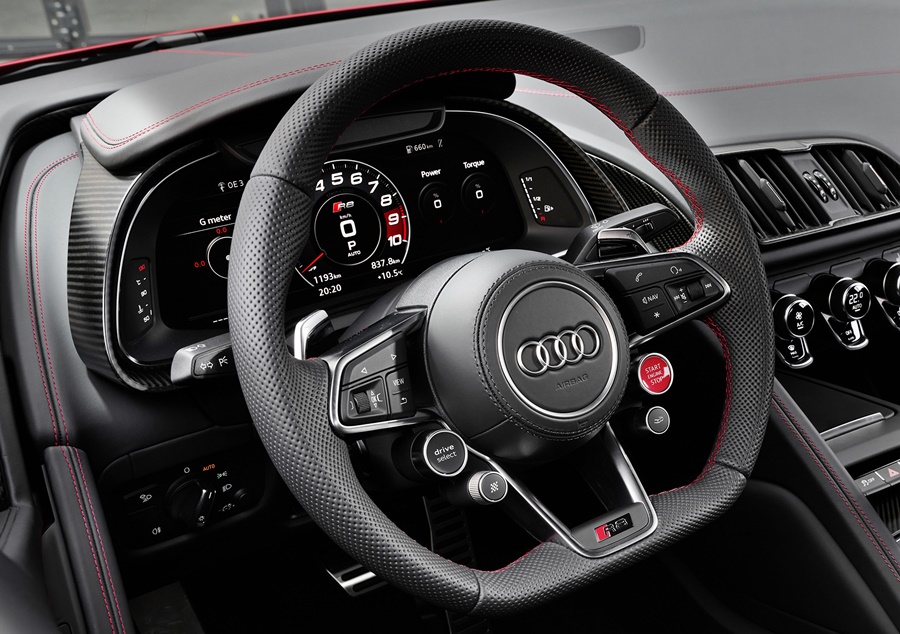 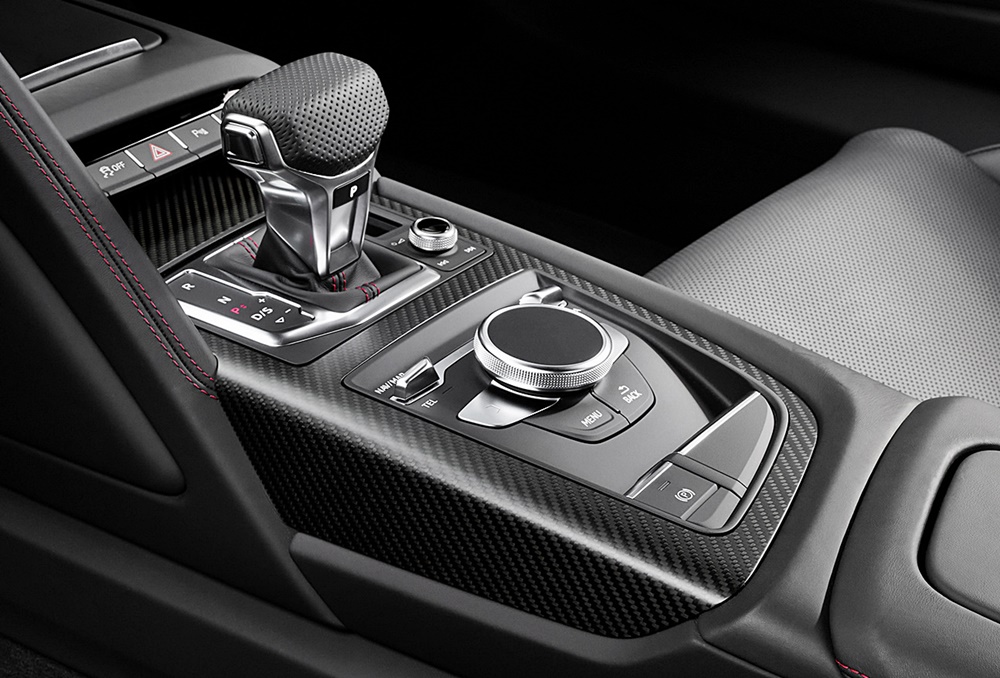 Racing car cabin
Given the exterior appearance, it would only be expected that the interior will have a ‘racing car feel’ and Audi’s designers have provided that. The eye-catching element inside is the ‘Monoposto’ – the large, heavily contoured arch that spans the area in front of the driver’s seat and is strongly reminiscent of a racing car cockpit. The Monoposto encloses the Audi virtual cockpit with a 12.3-inch screen, which is integrated into a freestanding casing. The R8 leather steering wheel with Multifunction plus has 4 control satellites, each for using Audi drive select, to start the engine, to activate Performance Mode and the engine sound as well as to control the Audi virtual cockpit.

Production largely by hand
The R8 V10 performance RWD is built – largely by hand – at Audi Sport’s factory. This is also the production site of the LMS GT4 racing car, which is derived from the production model and uses roughly 60% carryover parts. In Germany, the base price for the Coupe is €149,000 (about RM717,000), with the Spyder costing another 13,000 euros (about RM63,000). 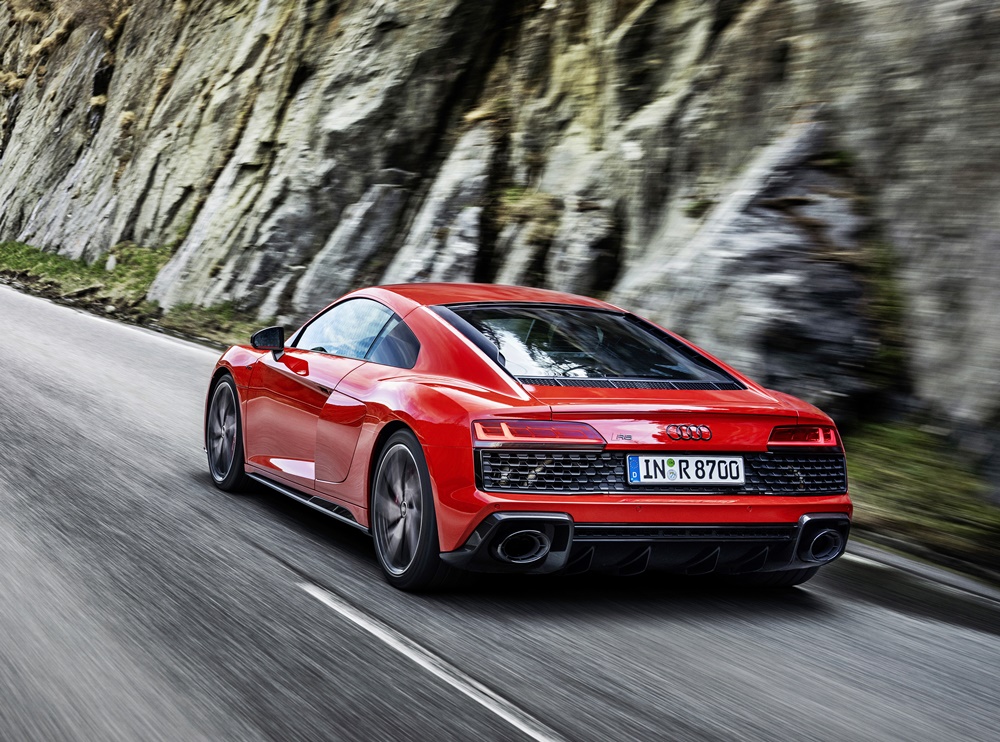