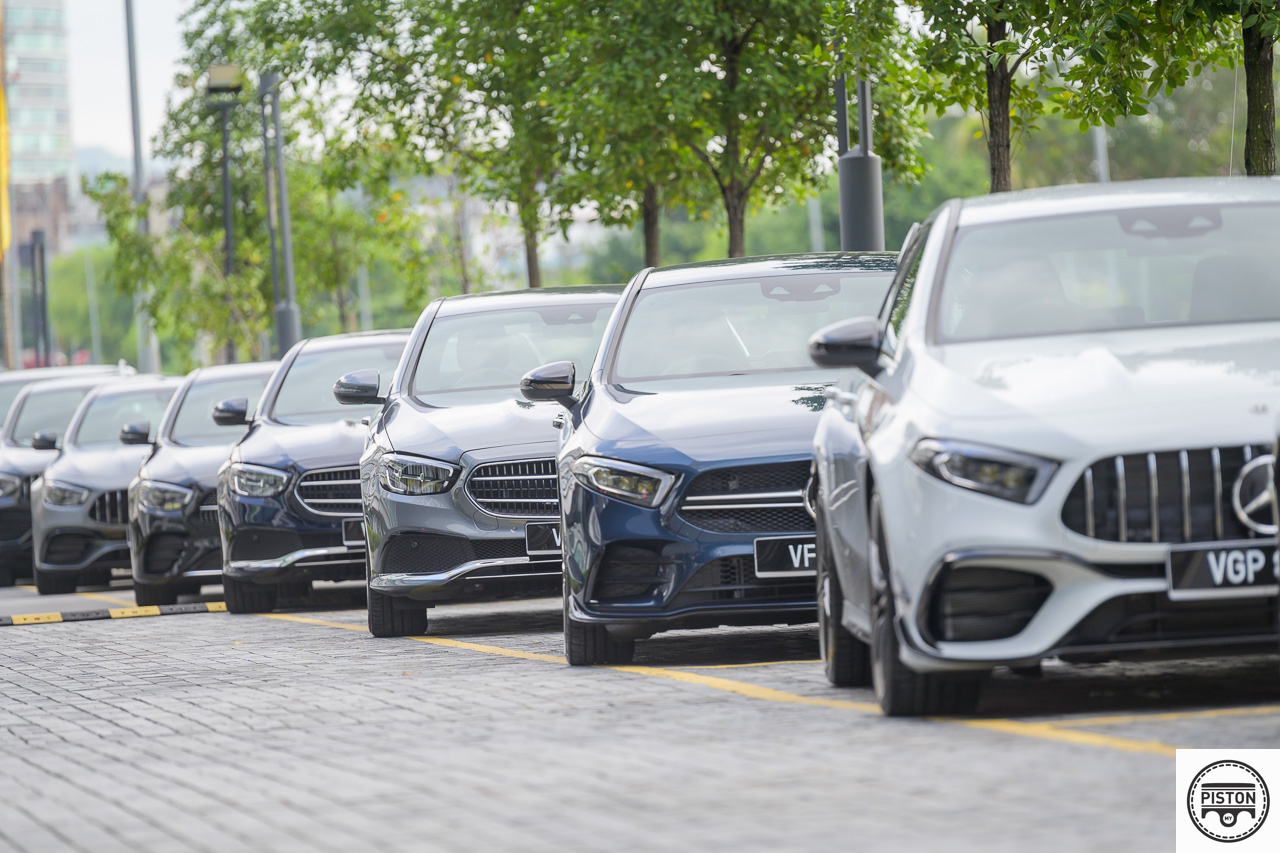 If there is one thing that this writer missed during the lockdown, it was the drives organised by automotive manufacturers.

These drives are usually well planned, coordinated, offers stops at places we never heard of and at restaurants we never ate at. Media drives as we motoring scribes call it, is the highlight of this career. 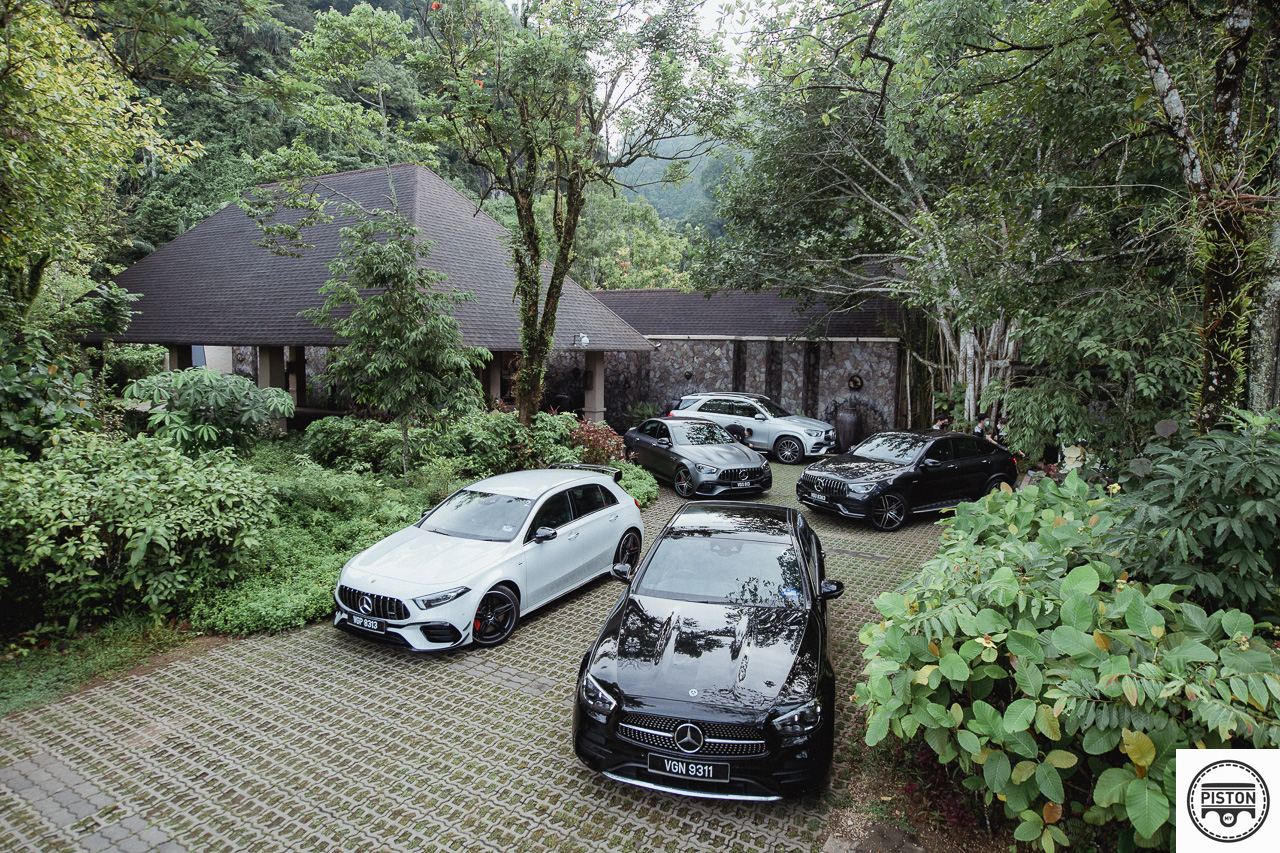 But they can be annoying as well. Planned convoys can be dull, with the lead car constantly conveying orders over a walkie-talkie.

And other members of the motoring journalism fraternity constantly complaining about getting lost, or their tyres lacking pressure. It can all be quite annoying.

But the one I recently attended which was also the first after the lock down ended, was a refreshing welcome into a stale ‘modus operandi’. 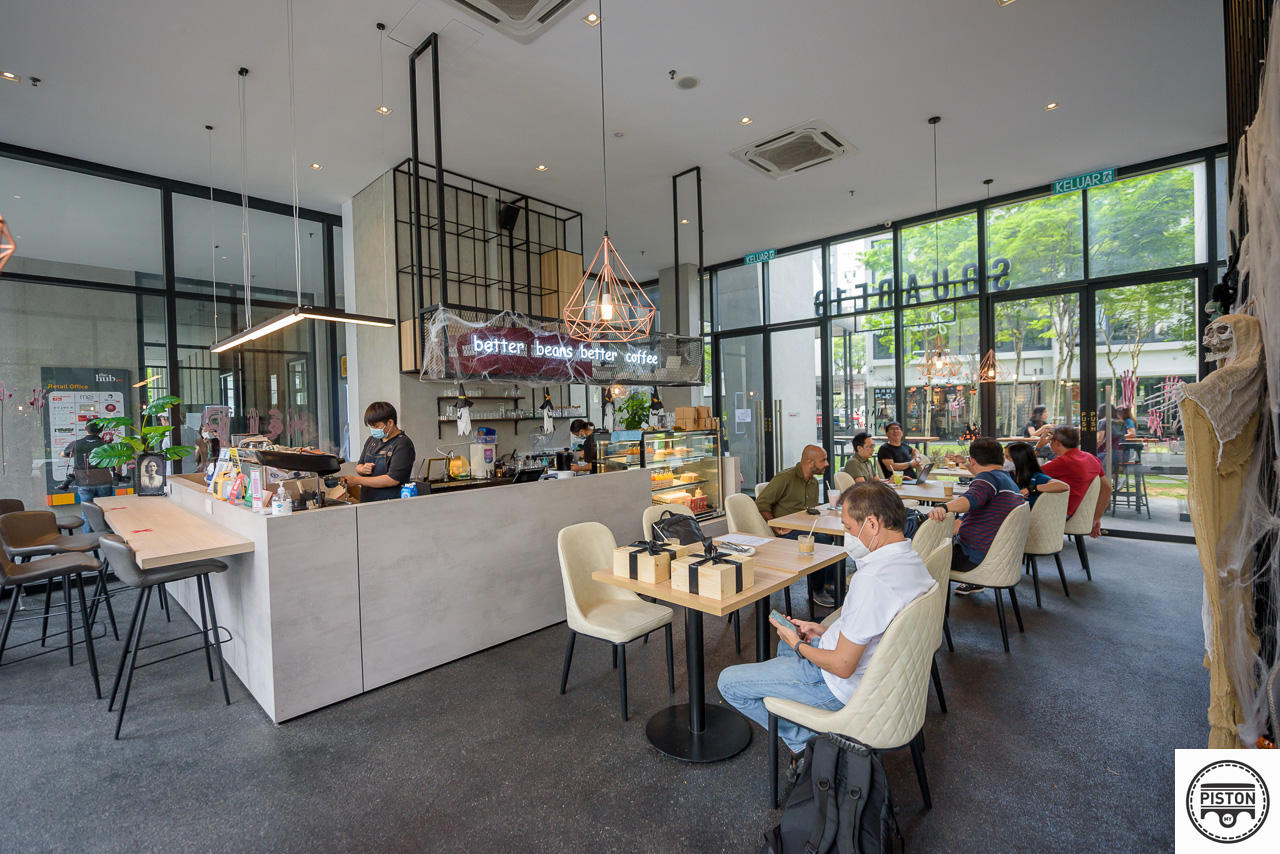 Organised by Mercedes-Benz Malaysia, the drive was as simple as passing us the keys, telling us where to meet, and a simple “see you there”.

Of course there was the classic flag-off for photos sake but that’s as close as it got to being ‘just another media drive’.

And there was the timing as well, a very humanly possible 10am meet up time rather than the usual 8am. Every manufacturer should take a cue from MBM on how to organise a media drive.

So I showed up at 10 at a cafe in PJ, did the Covid test, presented my result, had a simple breakfast since I already had one at home since the generous start time gave me time to have breakfast with my wife and kid before starting my work day. 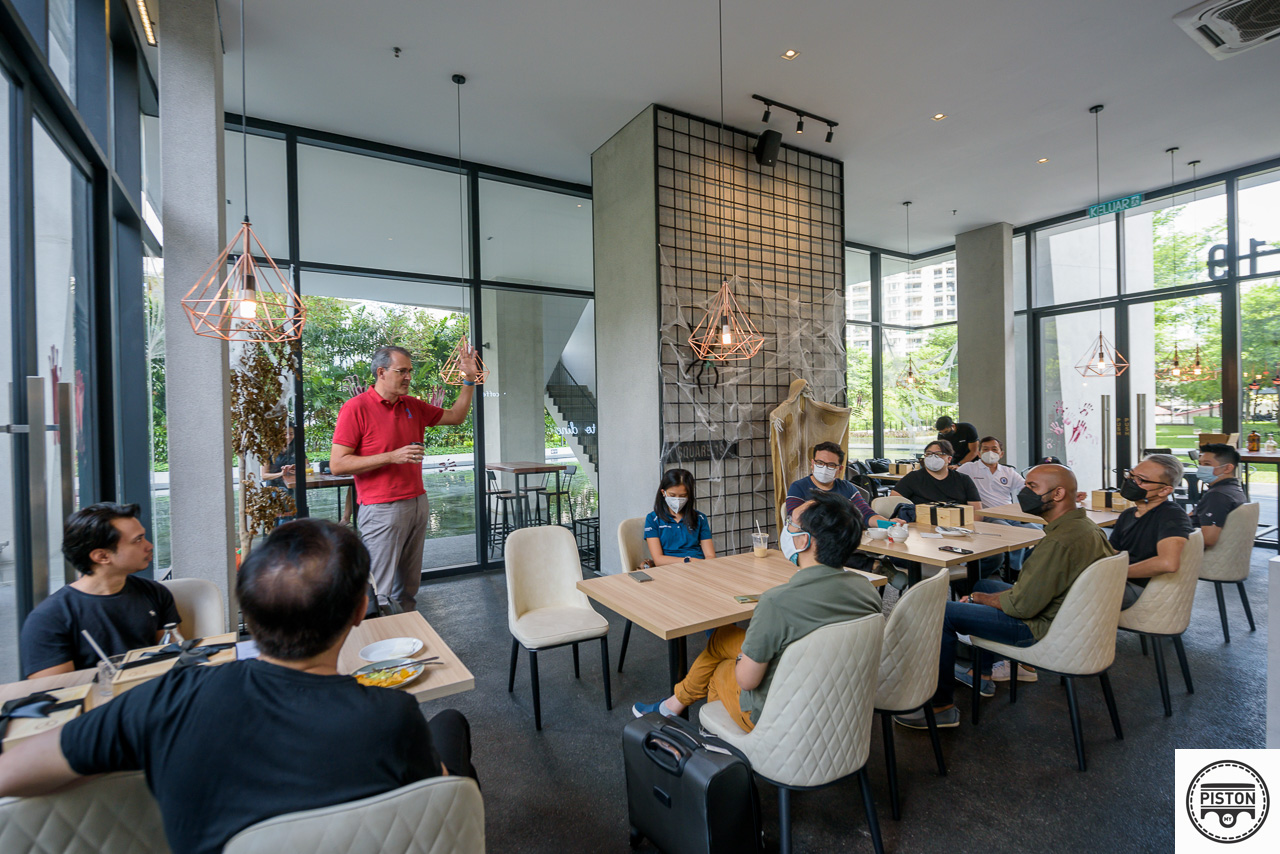 Then there was a 2 minute speech by the Vice President of Sales and Marketing of MBM, Michael Jopp, telling us about our day, and after that we were told which car we would be driving.

I got the E200 which may seem like the short end of the stick considering what was on offer, but I didn’t mind since the car had just been launched in Malaysia, and I was quite curious to know how it was like. 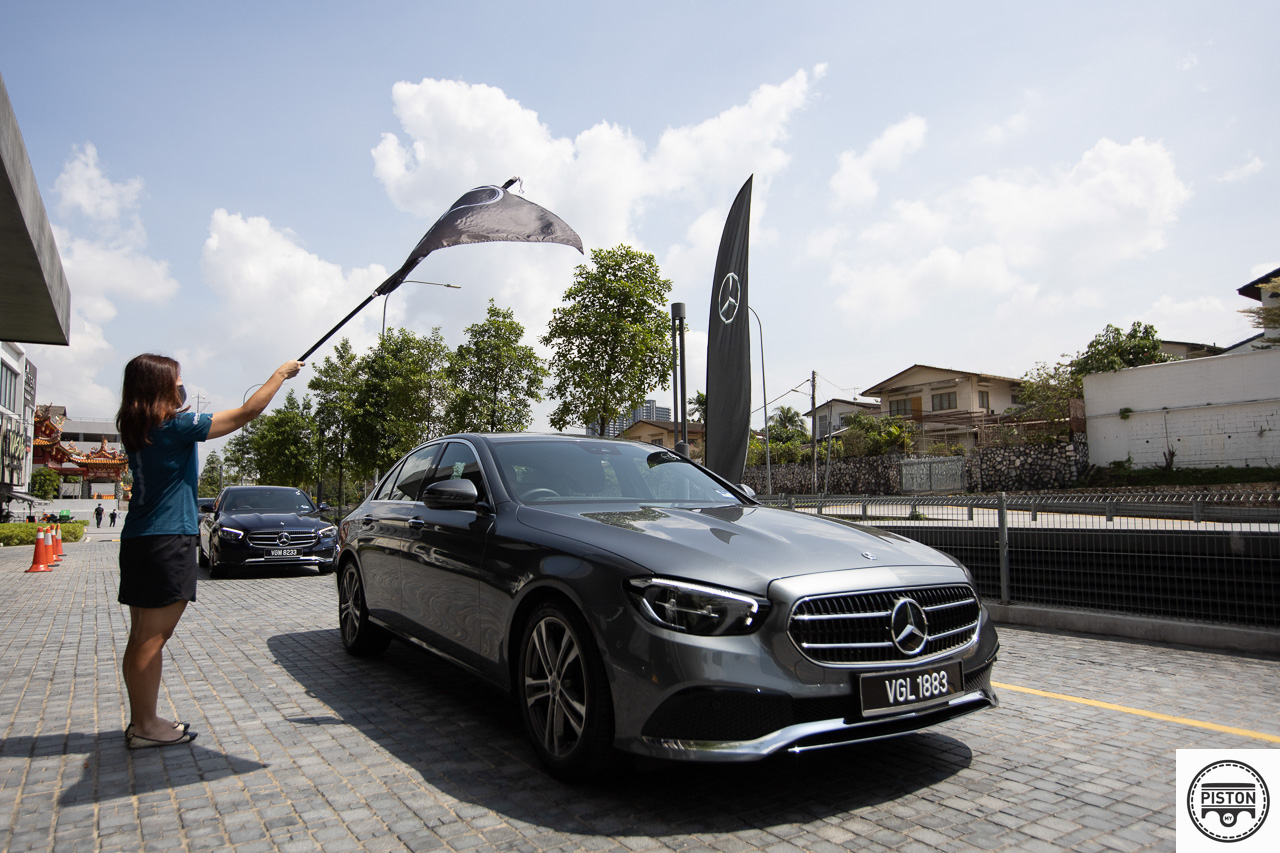 Our final destination was Ipoh where we would be staying the night at The Banjaran – a resort that is famous for its hot springs, it being situated among mountains that are a couple million years old, and a one of a kind, possibly the only one of its kind, bar and restaurant in a 250 million year old cave. Talk about dining like cave men. 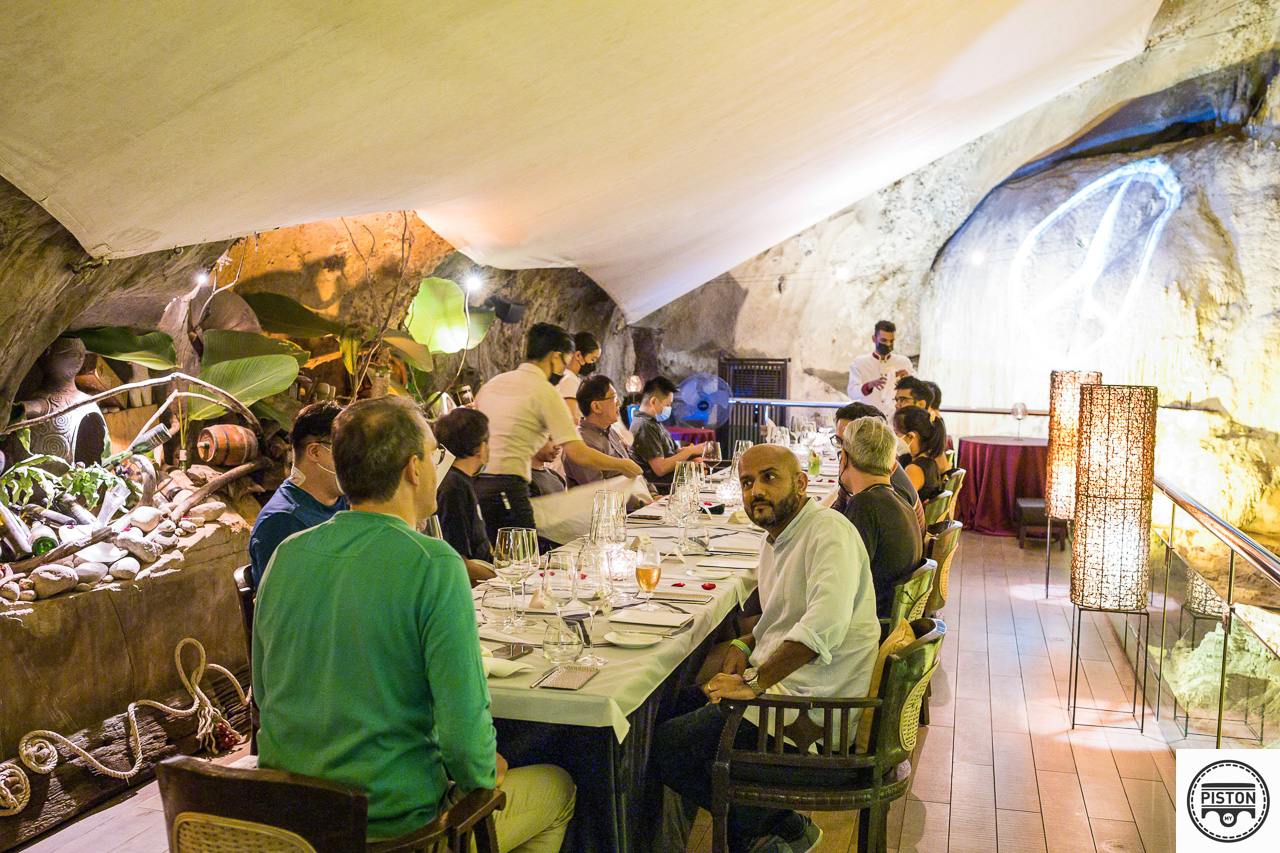 Though we weren’t required to travel in a convoy, most of us somehow found ourselves travelling together on the highway. Each to his own car. No sharing during the pandemic. Which was excellent.

The new Mercedes-Benz E200 may be the entry level model to the E-Class world, but it certainly doesn’t feel that way. 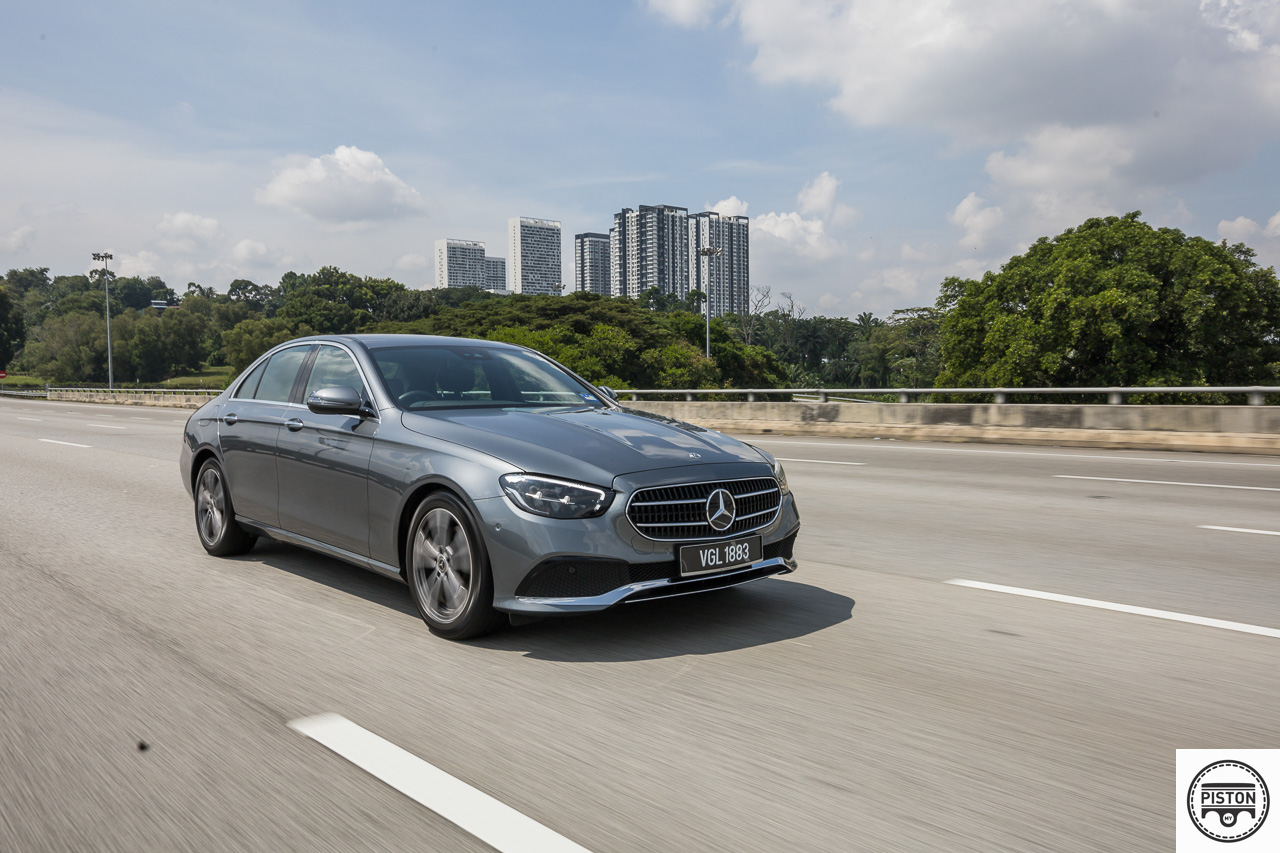 The refinement is typically Mercedes-Benz, though I did think the run-flat tyres were noisy at highway speed; a typical character of run flat tyres since it is made of a stronger and harder thus noisier compound.

I was also rather surprised by how well power was laid down by the E200 on the highway. But in hindsight, it shouldn’t have been surprising at all.

The E200 is powered by a 2.0-litre turbocharged petrol engine producing 194hp and 320Nm of torque.

That is quite decent for an entry level E-Class. 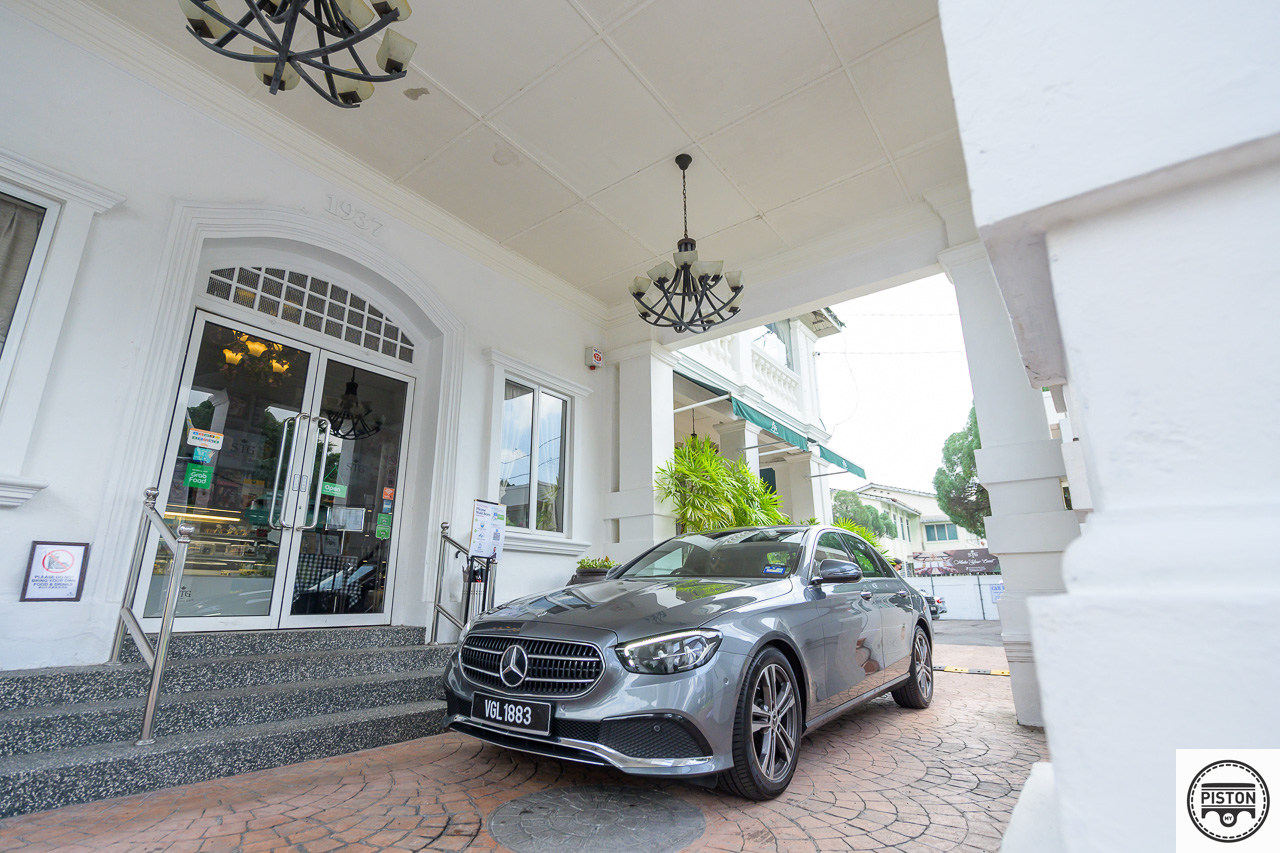 And then you consider that the suspension has been tuned for comfort and the interior offers exemplary refinement.

So you get the usual electronic seats with memory function though this do not come with adjustable thigh support.

The new generation steering wheel in the E200 looks and feels great, but I am not a fan of the touch pads on the steering as that can be tricky to operate when the car is moving. I guess this takes time to get used to.

I did think the seats were quite comfortable and the interior was spacious, which is ultimately what an executive car like the E-Class is all about.

I am not a fan of the aluminium inserts that run along the dash and onto the doors and neither am I impressed by the black open-pored ash wood that is situated on the centre console. 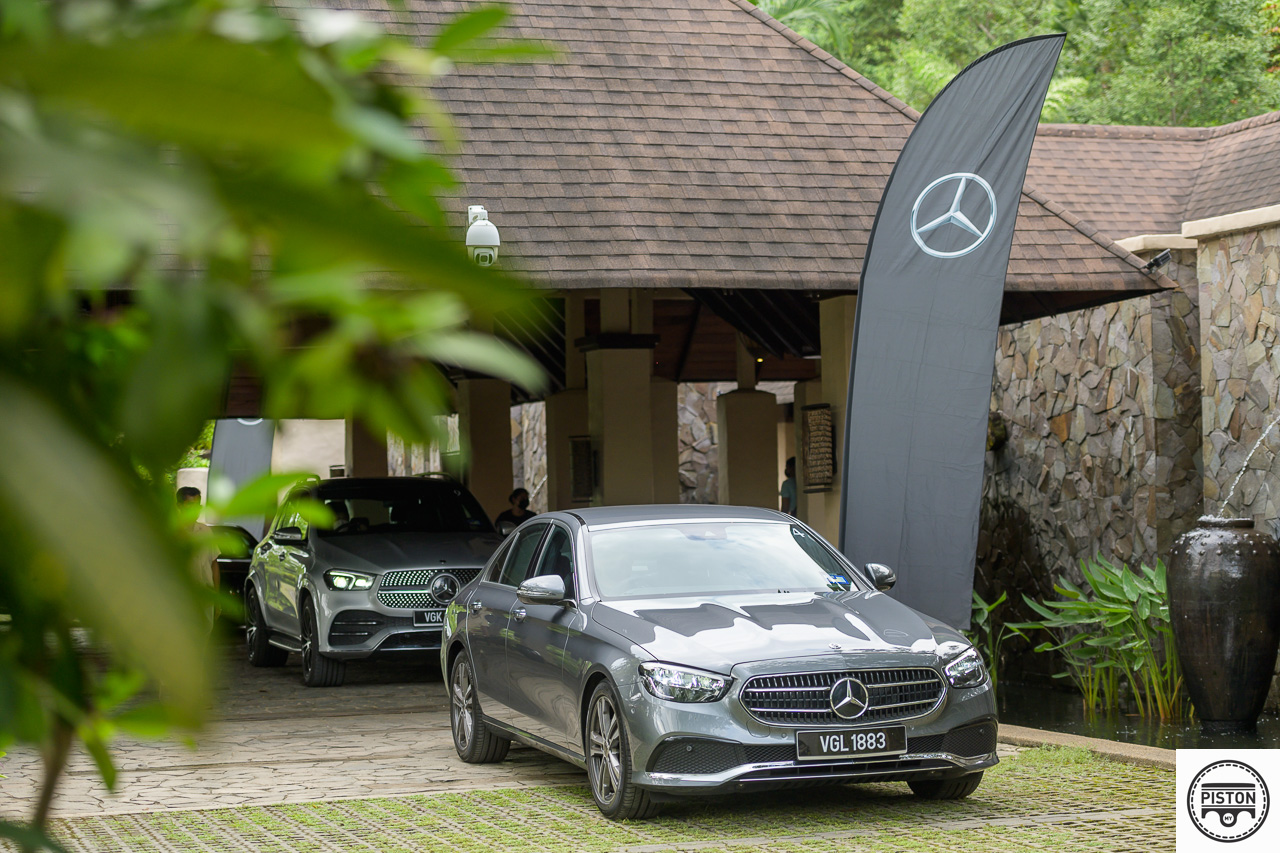 I found myself thinking that a lighter choice of wood finishing instead of aluminium would have been nice. But then again, I was driving the sportier Avantgarde model. So that was to be expected.

I prefer an E-Class to be more luxurious than sporty this side of an AMG. But that’s just me.

What I really liked about the new E200 though was that massive MBUX screen, which stands for Mercedes-Benz User Experience. 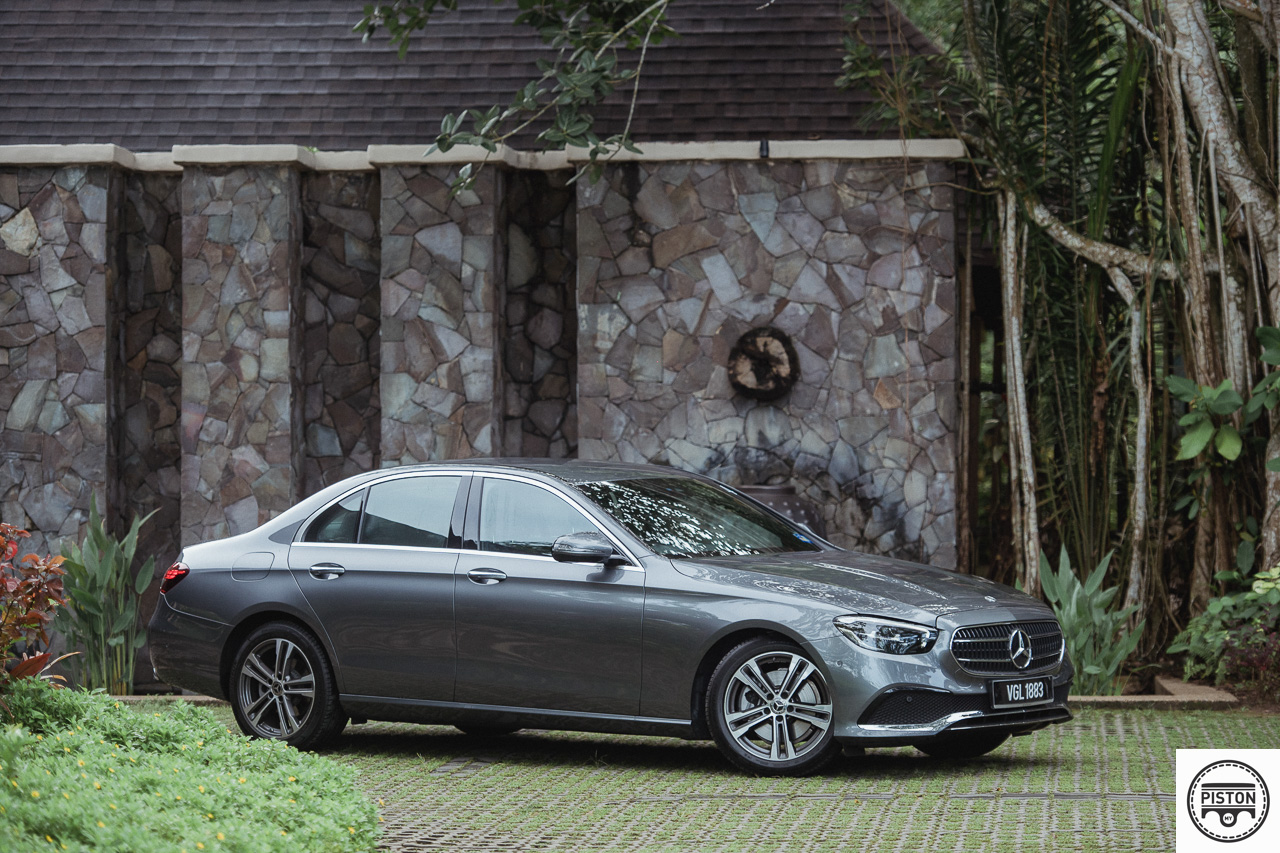 Now this is a display screen that is 24.6 inches long and is divided into two parts. Each part measures 12.3-inches.

The screen on the left is touch-enabled and lets you access the usual stuff like radio, GPS, seat and air-conditioning settings and general settings to do with the driver and passenger.

The one on the right however is not touch enabled and this is where you get the usual speedometer, rpm dial, and other information to do with the internals of the car. 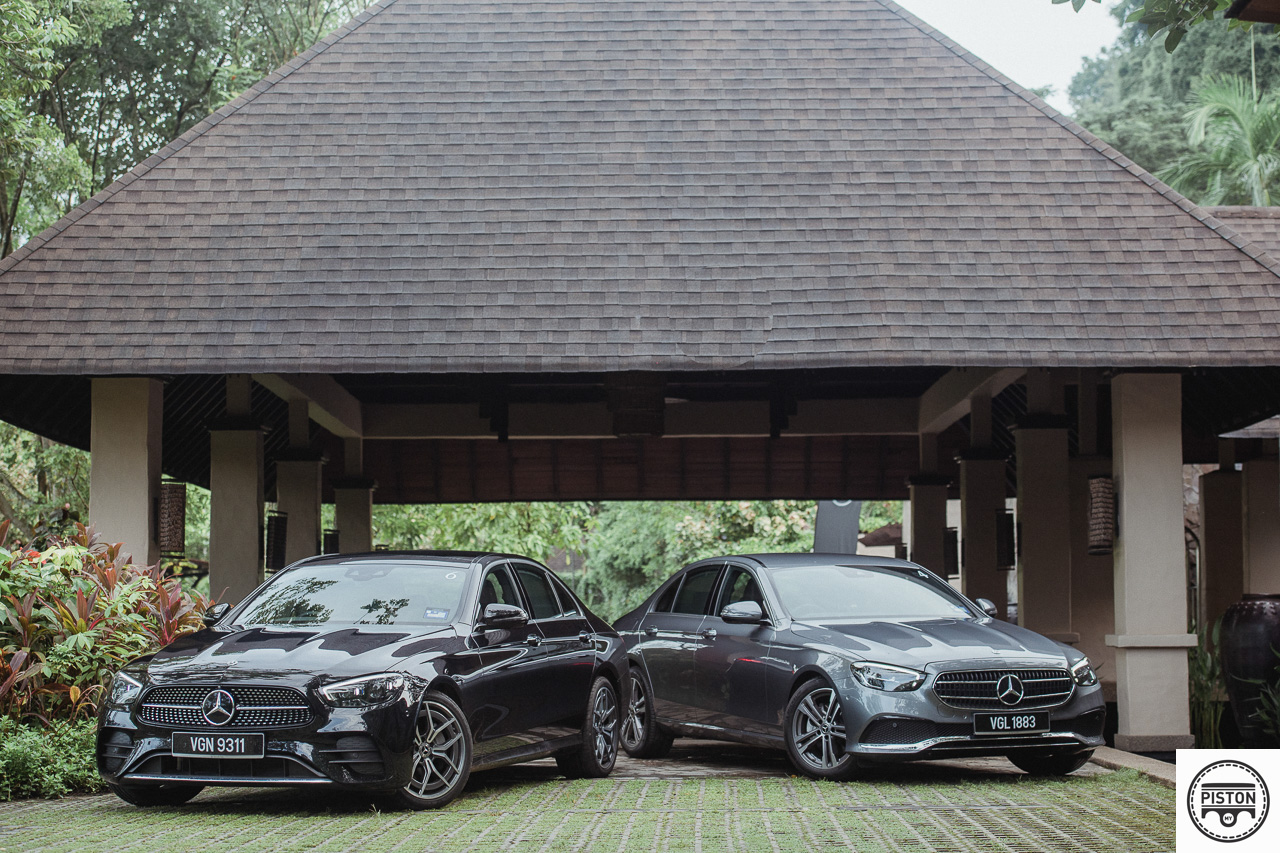 The display settings on the right can be adjusted according to your mood – Sporty, Classic and even Basic which throws everything away and just gives you the speedometer and clock and just a little bit more such as which gear position you are in.

This makes the E200 feel high-tech and the power makes it feel sporty. You also get drive modes but that only adjusts the sensitivity of the accelerator, the heft of the steering wheel, and the speed at which the gears shift. It doesn’t do anything to the suspension so that is one constant in this car. 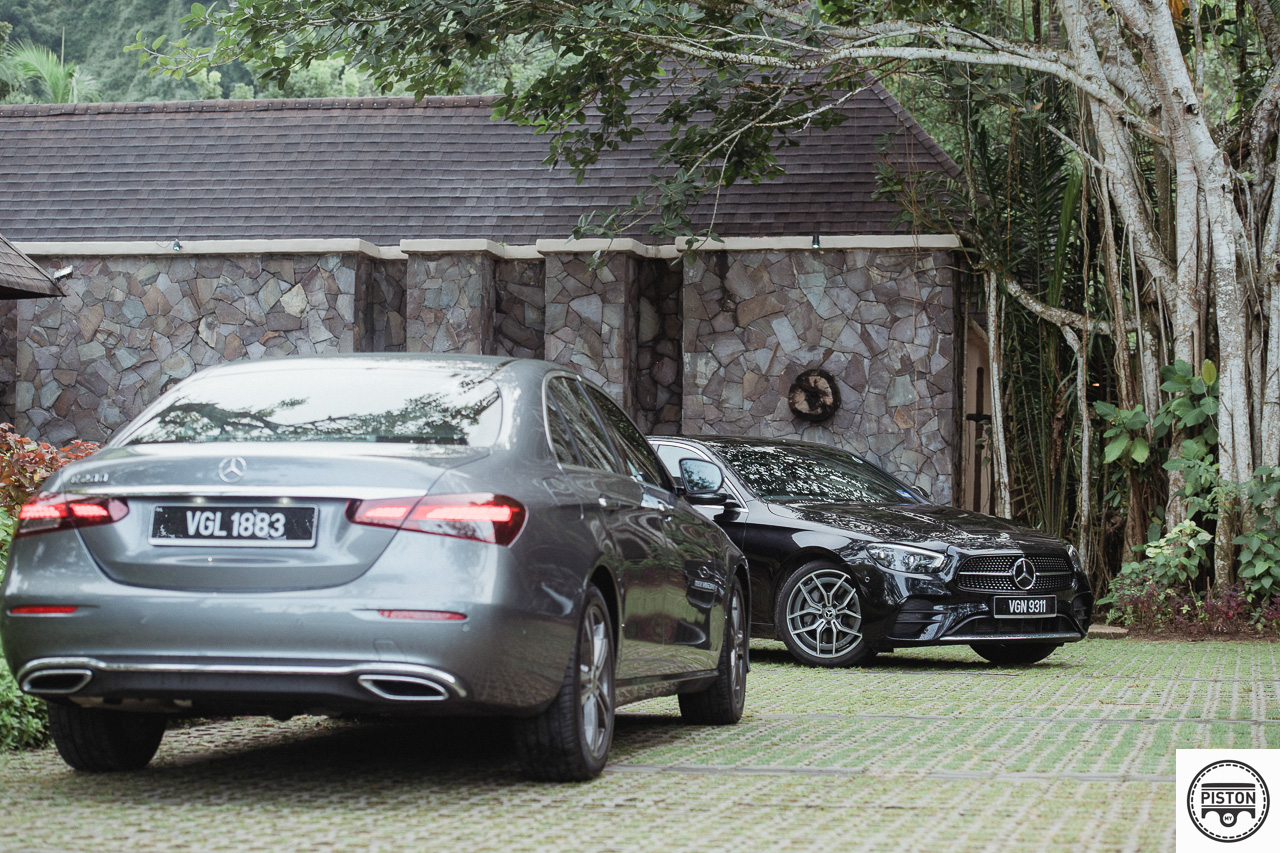 Driving it is generally comfortable and the power is decent while the engine makes a nice throaty sound during acceleration. But it is ultimately an E200 and I did found myself wondering how the E300 would feel like.

The following day, after spending some time with the wonderful Mercedes-Benz team over lunch and dinner, I was asked which car I would like to take home.

Not just home, Mercedes-Benz Malaysia told us to keep the car till the end of the week. Didn’t I say this drive was one of a kind? 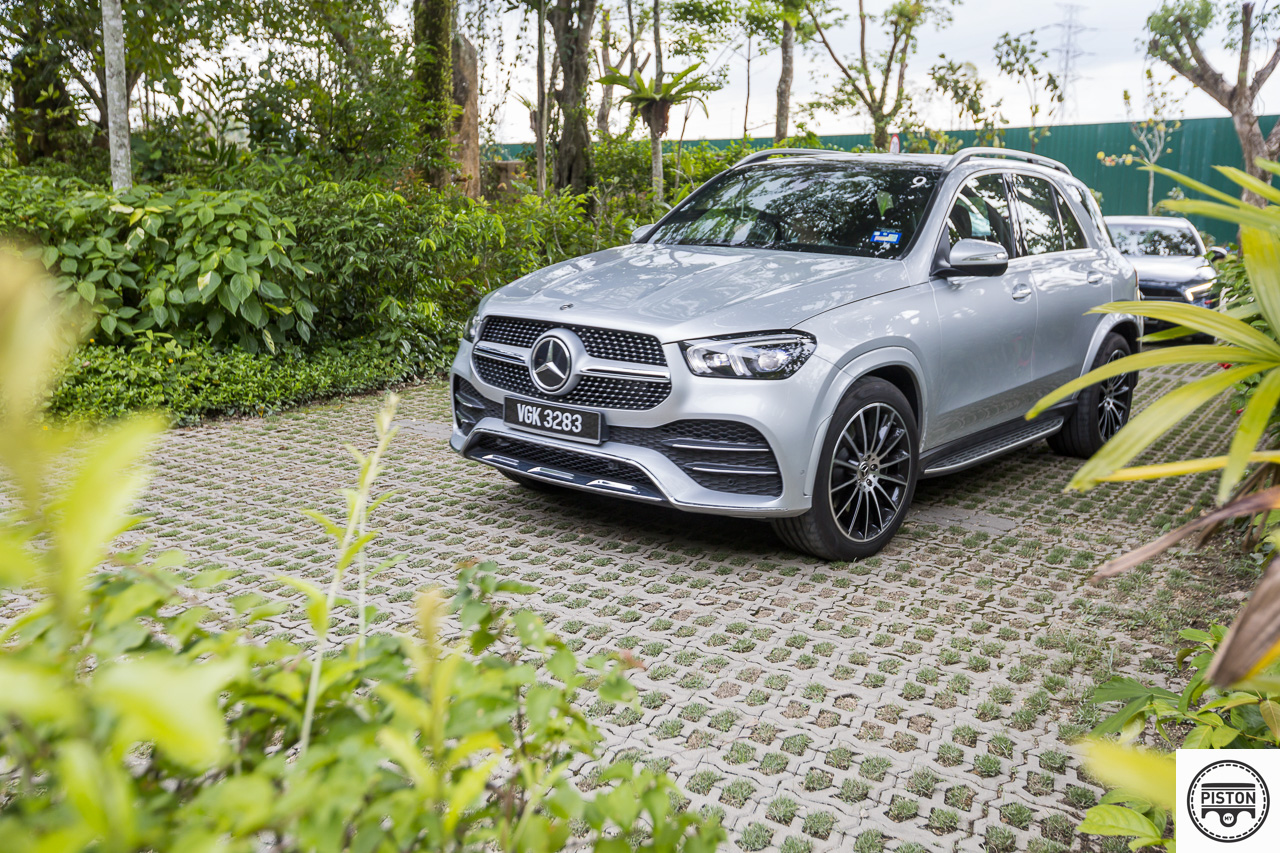 I chose to drive the GLE 450 – an SUV that I had been hugely curious about because I think it looks great and is one of those cars that doesn’t know how to put a wheel wrong.

And as expected, the Mercedes-Benz GLE 450 was so impressive that it deserves an article and a video review of its own. So I will put down my thoughts on that in a separate article, but let me just tell you this – the GLE 450 is one of the most complete car/SUV that I have driven in recent times.

And so was the drive to Ipoh. 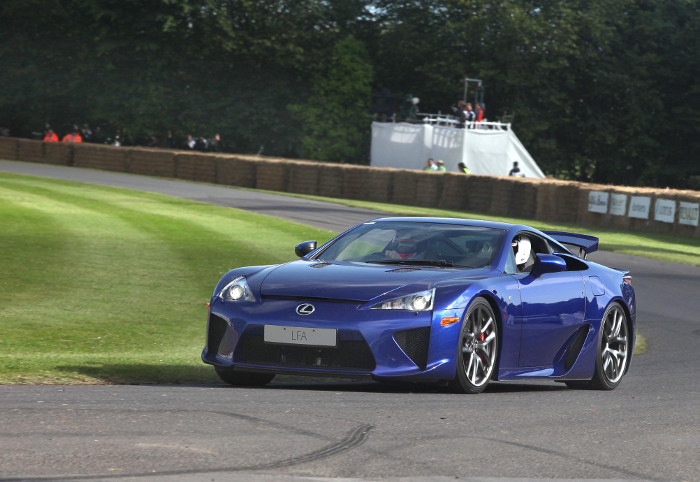 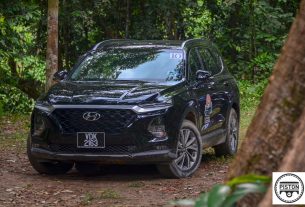