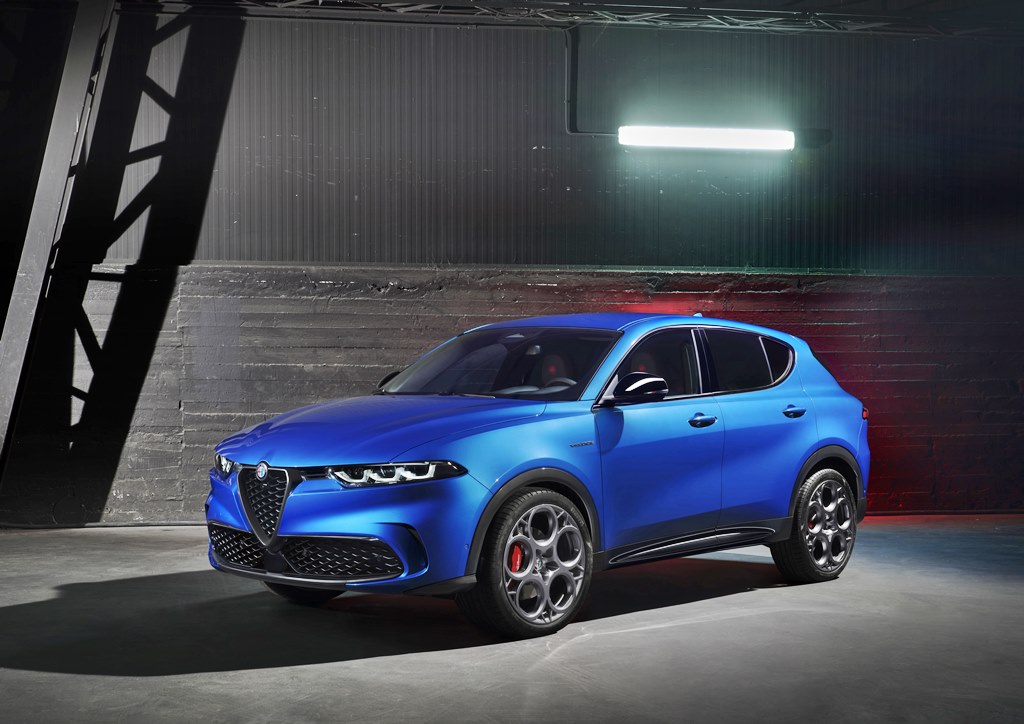 With its low volumes, Alfa Romeo has struggled for many years and relied on the loyalty of the alfisti to keep it around. Heritage can only go so far in modern business, but Alfa Romeo has usually survived to continue its business. Now under the Stellantis Group, it will have some more breathing space with access to considerable shared resources that will allow one new model to be launched every year during this decade.

It’s been a while since we saw a really new model from Alfa Romeo and the new Tonale is something that has taken almost 3 years to go into production. A concept was shown at the 2019 Geneva Auto Show with a plan to put it in showrooms in a few years. By the time Stellantis came into the picture, the development would have been too far ahead to stop or change, so in 2022, it has its global debut although many markets may only get it in 2023.

The Tonale has compact dimensions which means it will do battle in the most competitive area of the SUV segment. While said to remain true to its DNA of Italian sportiness, it also marks the metamorphosis of the brand as it starts a new era of connectivity and electrification. 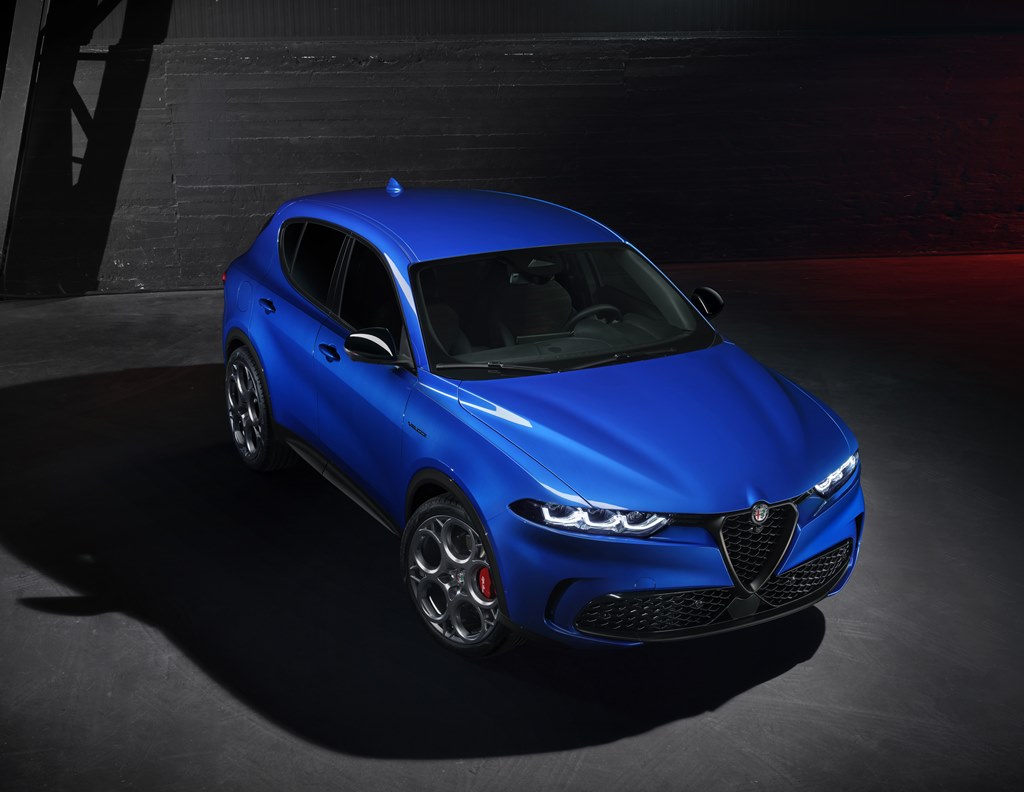 Concept car inspiration
Much of the design draws on the concept car shown in Geneva which contained many classic Alfa Romeo stylistic features, reinterpreted in the name of modernity. The sides are notable for their extended curve below the waistrail, known as the ‘GT Line’, which runs from the rear to the headlights, giving definition to the car’s body and its profile. In terms of the modelling, its full volumes and sensuality are reminiscent of models such as the 8C Competizione.

At the front, the new floating ‘Scudetto’ shield is no longer a part of the bumper but a distinctive element on its own. The lower part includes two main side air intakes which together with the shield create what is known as the ‘Trilobo’. 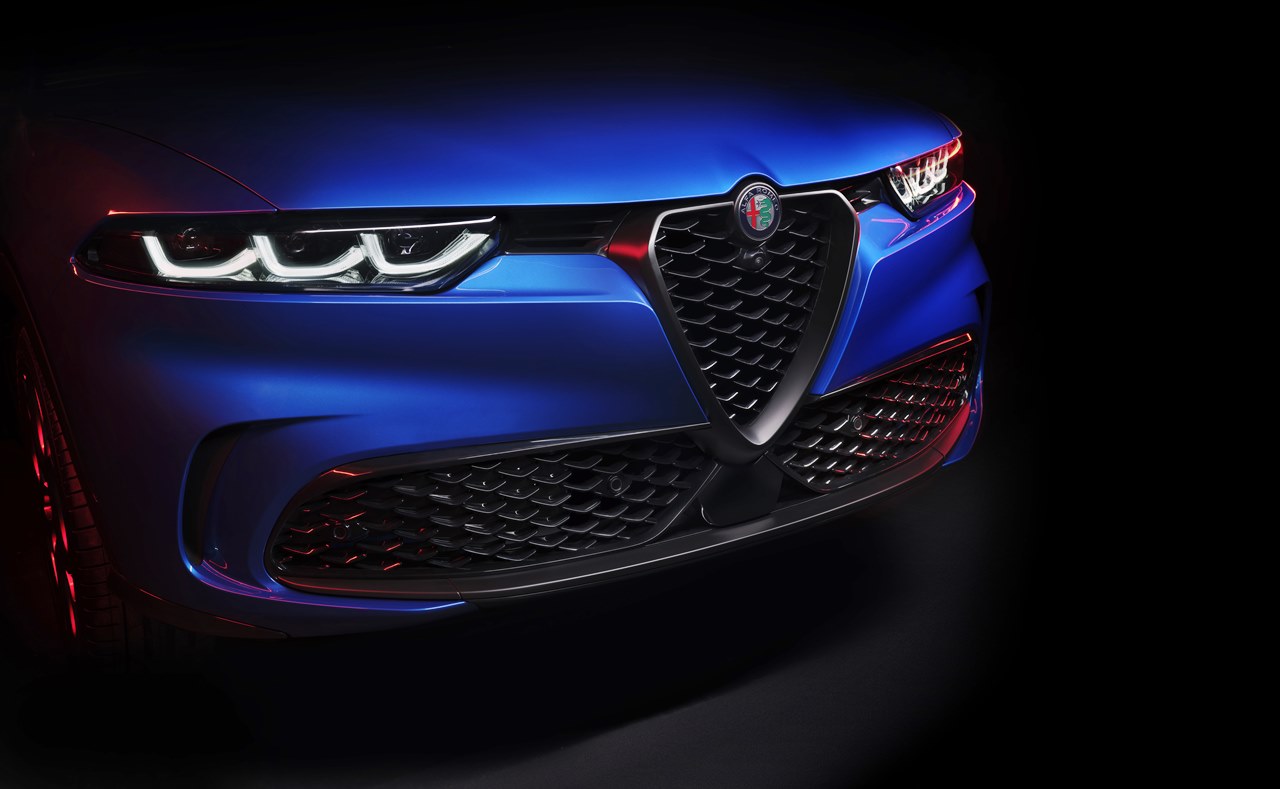 The eye-catching ‘3+3’ headlights are inspired by the SZ Zagato and the Proteo concept car. These lights adopt a new full-LED adaptive matrix and provide daylight, dynamic turn signals and a ‘welcome and goodbye’ feature. They also have adaptive capabilities to maximize illumination without dazzling other drivers, with a third module automatically activated when turning corners to expand the lighting laterally. 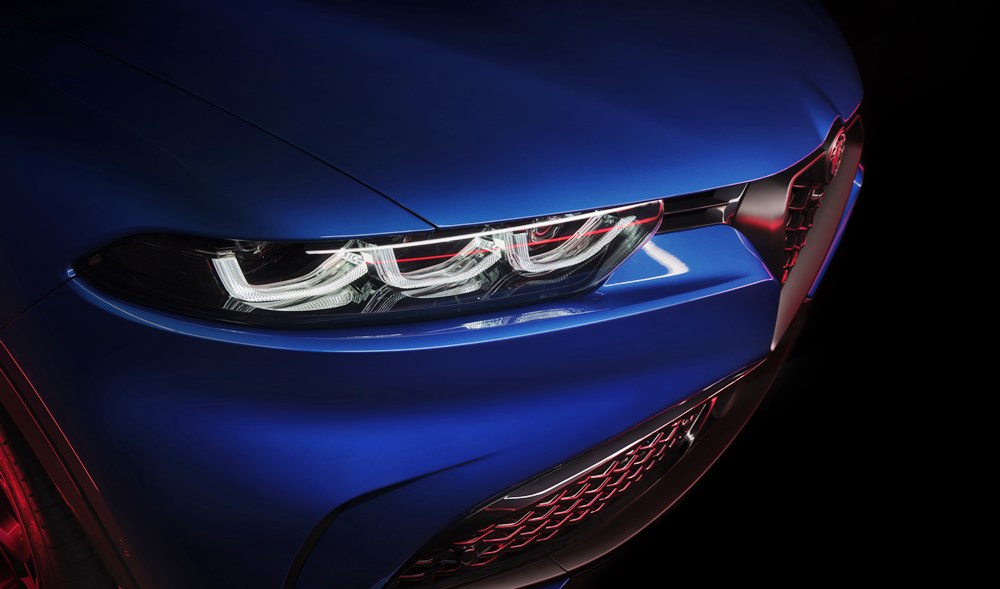 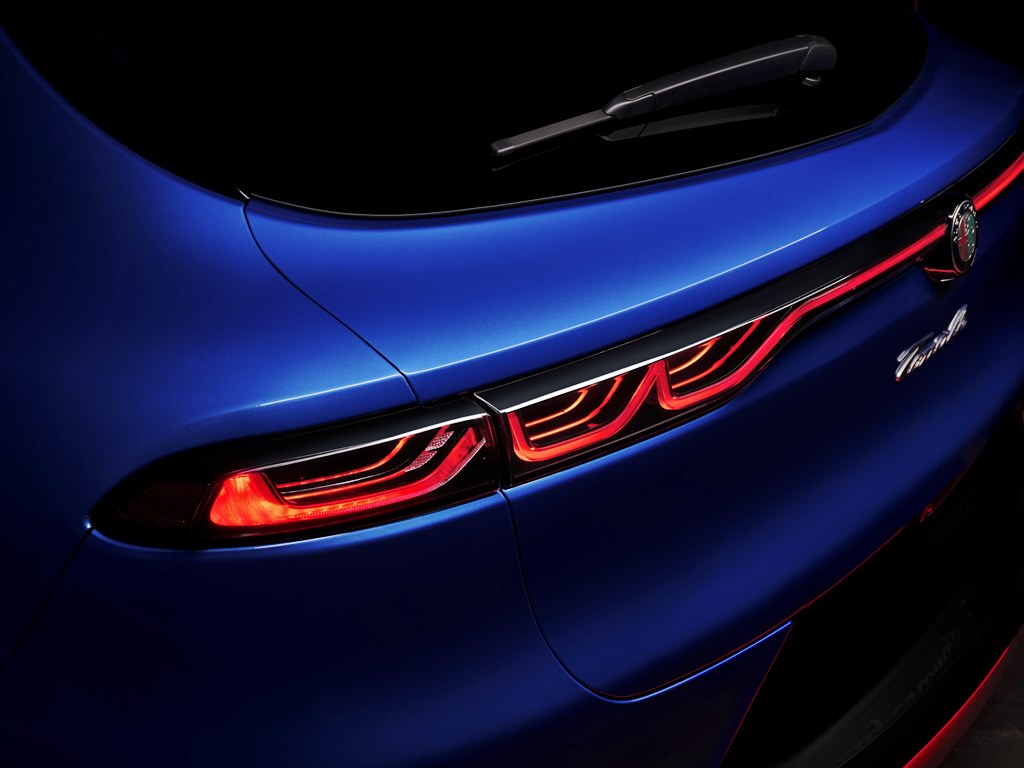 At the rear too, the light units are strong elements that for a visual signature for the Tonale. The roundness and, now classic, fold in the lower centerline shape of the rear window characterizes the SUV’s upper rear volume in a sporty yet elegant way evoking iconic cars like the 8C Competizione where the daylight opening, the edges of the side windows and the top of the rear window meet.

The ‘teledial’ alloy wheels that were received positive feedback when shown on the concept car have also been adopted on the production model. This is the reworking of the perforated telephone dial theme, the result of an evolution that began in the 1960s with the 33 Stradale. Over time, the perforations have gradually been increased in size and becoming more closely related to needs for brake cooling, lightness and resistance. 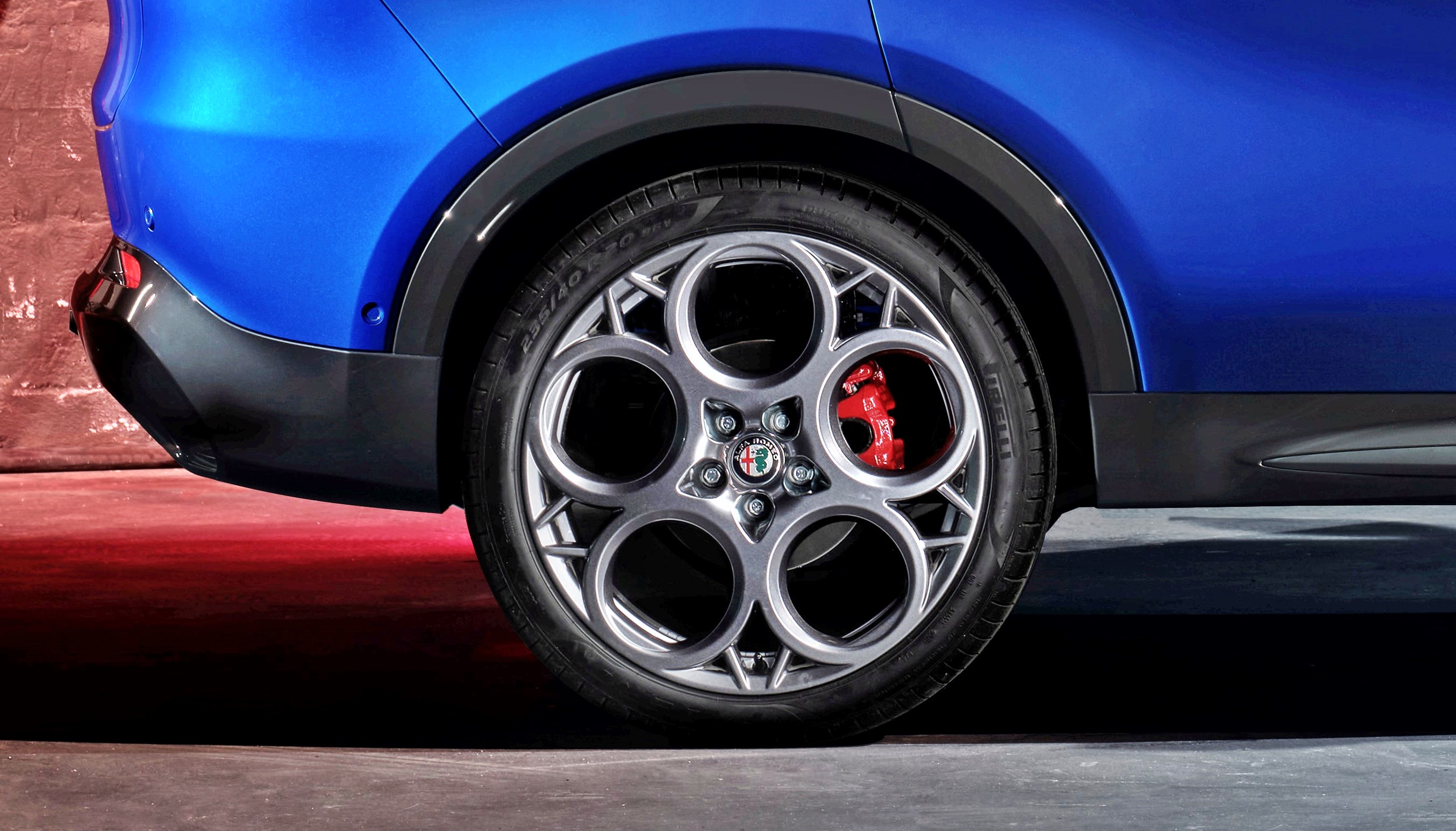 Driver-centric cabin
As would be expected, this is an SUV but the racing heritage of Alfa Romeo is not ignored. Everything is driver-centric, with the diagonal tunnel, slightly undulating dashboards and instruments facing the driver. The characteristic elements of the new model include the telescopic instrument panel, with its clear Alfa Romeo stylistic matrix, and the compact steering wheel with aluminium shift paddles. 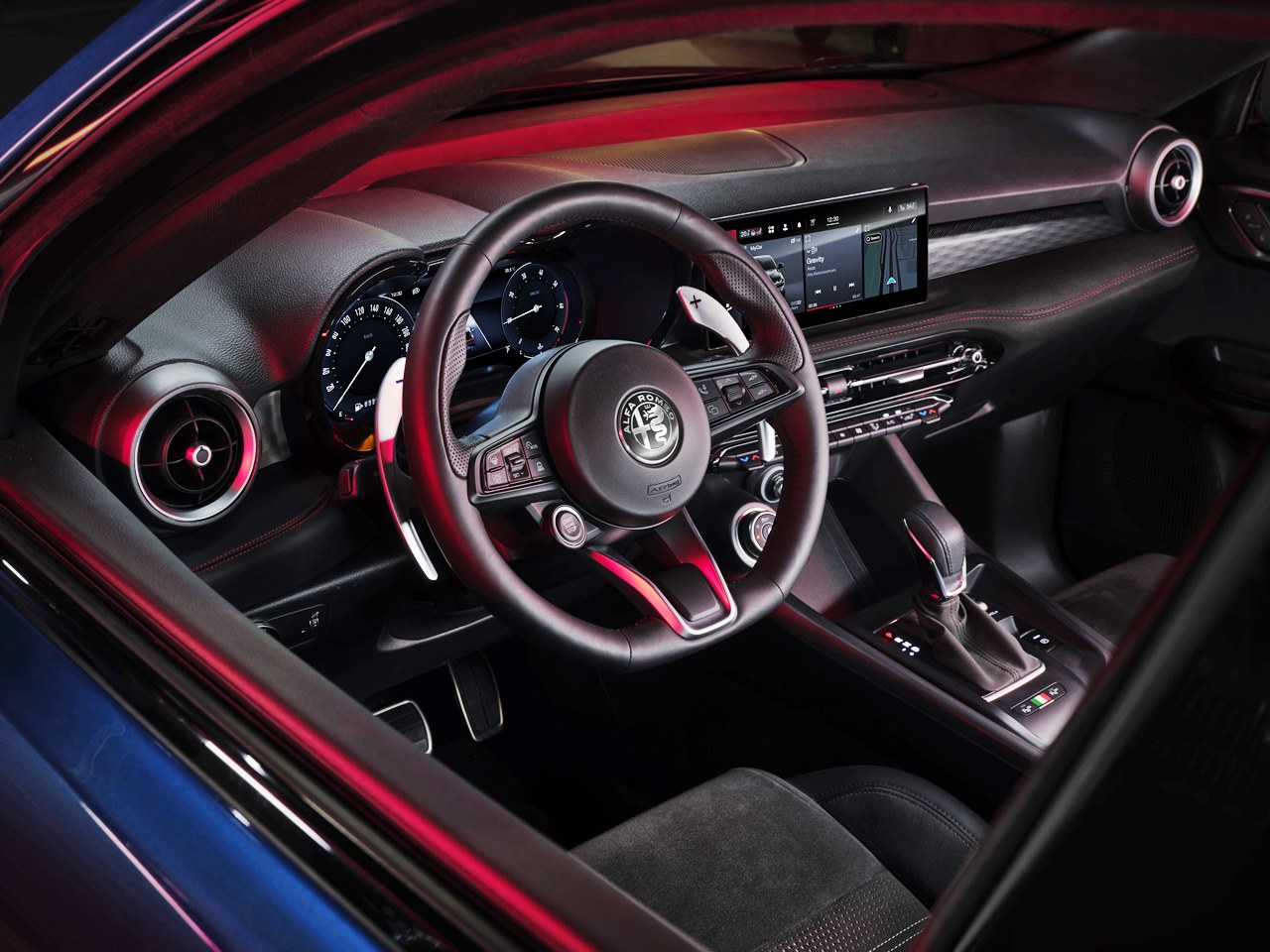 The new D.N.A. driving mode selector, slim central air conditioning vents and external turbine shaped vents, the central tunnel and handles are embellished with a diamond texture inspired by precision mechanical processing with laser engraving. The dashboard also includes an insert with a backlight effect so when the panel is off, a graphic appears. The same 3D features can be seen in the seat fabrics, from the basic versions all the way to the gradient effect with contrasting background colour. 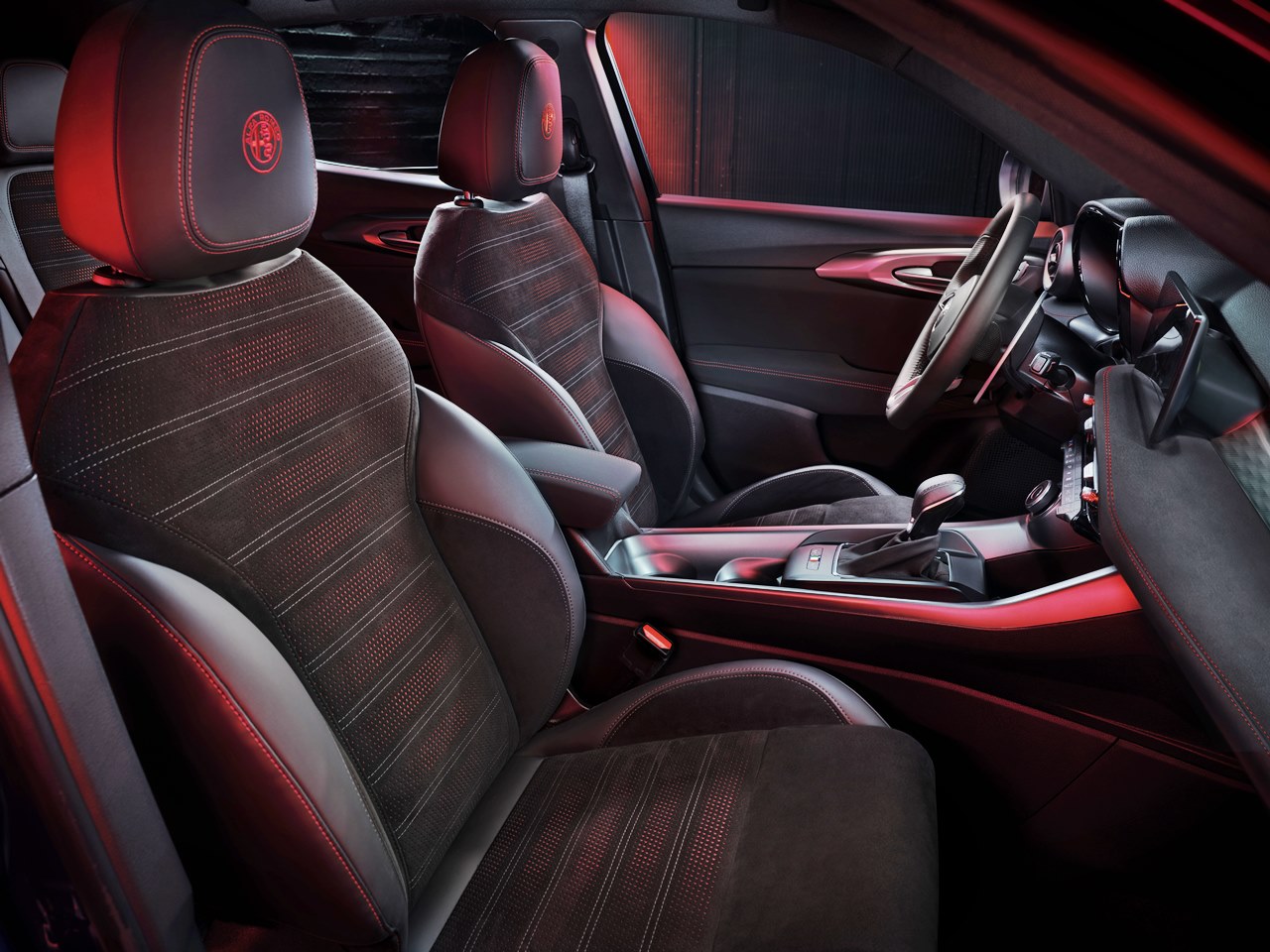 Powertrain choices
Depending on the market, electrified powertrains or combustion engines (or both) will be offered. The front-wheel drive hybrid powertrain has a new 4-cylinder 1.5-litre petrol engine with a Variable-Geometry Turbocharger, and a 48V 15-kW electric motor. Besides two output levels – 130 ps and 160 ps – there’s also a 275 ps plug-in hybrid (PHEV) Q4 version with all-wheel drive that will have a claimed electric range of up to 80 kms.

The new 7-speed TCT dual-clutch transmission enables start-up and travel in only electric mode at low speeds and when parking and cruising, subject to battery levels. A full battery recharge is said to take 2.5 hours when using a 7.4kW fast charger. 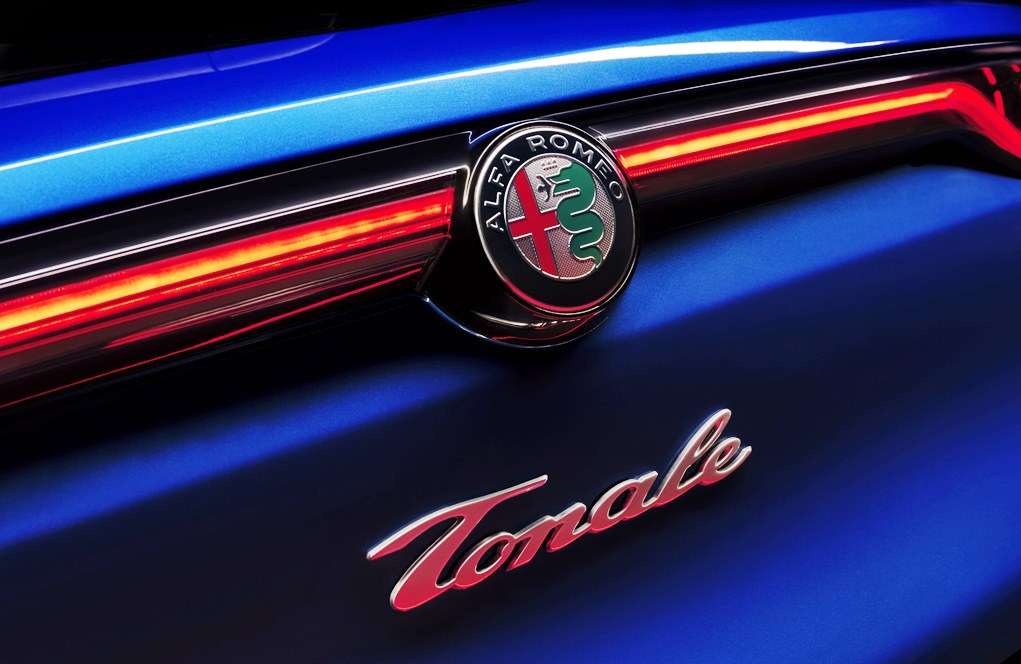 Some markets will still be able to get good old powertrains with just combustion engines. There will be Tonale variants with a 2-litre 4-cylinder turbocharged petrol engine as well as a 1.6-litre turbodiesel engine.

The driving dynamics of Alfa Romeos have always been much appreciated and respected, and even with an SUV, these cannot be compromised. One element that contributed to ensuring this is the optimally balanced weight distribution between the two axles. This required special management of mass and materials, which was done both by working on the car’s layout and by placing all the heavier components as centrally as possible.

The Tonale has an Integrated Brake System (IBS), an innovative electromechanical system that combines stability control with conventional servo brakes. Said to be an industry first, the integration between electronics and mechanics, significant weight optimization, optimal feeling and the total absence of pedal vibrations can guarantee the system instantaneous brake response. The fixed calipers are from Brembo, with four pistons and self-ventilated discs at the front and solid discs at the rear. 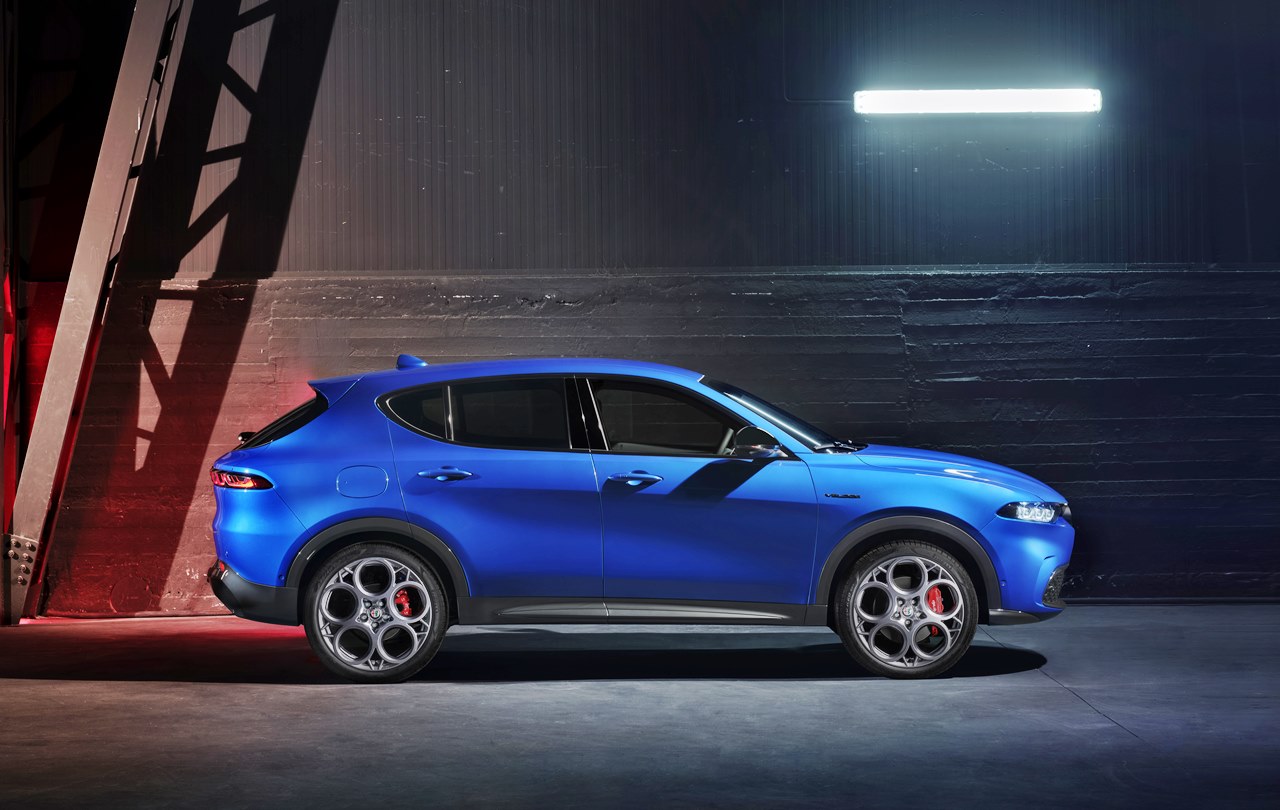 New ADAS systems
The Tonale is equipped with new Alfa Romeo Advanced Driver Assistance Systems (ADAS) for Level 2 autonomous driving, which means that the vehicle can automatically handle acceleration, braking and staying within a lane while maintaining driving safety. However, the driver still needs to be alert and involved, though to a lesser degree which can reduce fatigue on long journeys.

In the event that the driver loses concentration or even falls asleep, there are features like Autonomous Emergency Braking which will activate the brakes if the driver does not react to alerts. The Drowsy Driver Detection system constantly analyses the vehicle’s movements to detect any characteristics which indicate driver fatigue. Once a certain threshold has been exceeded, the system emits beeps and/or visual warnings, recommending the driver stop for a break. 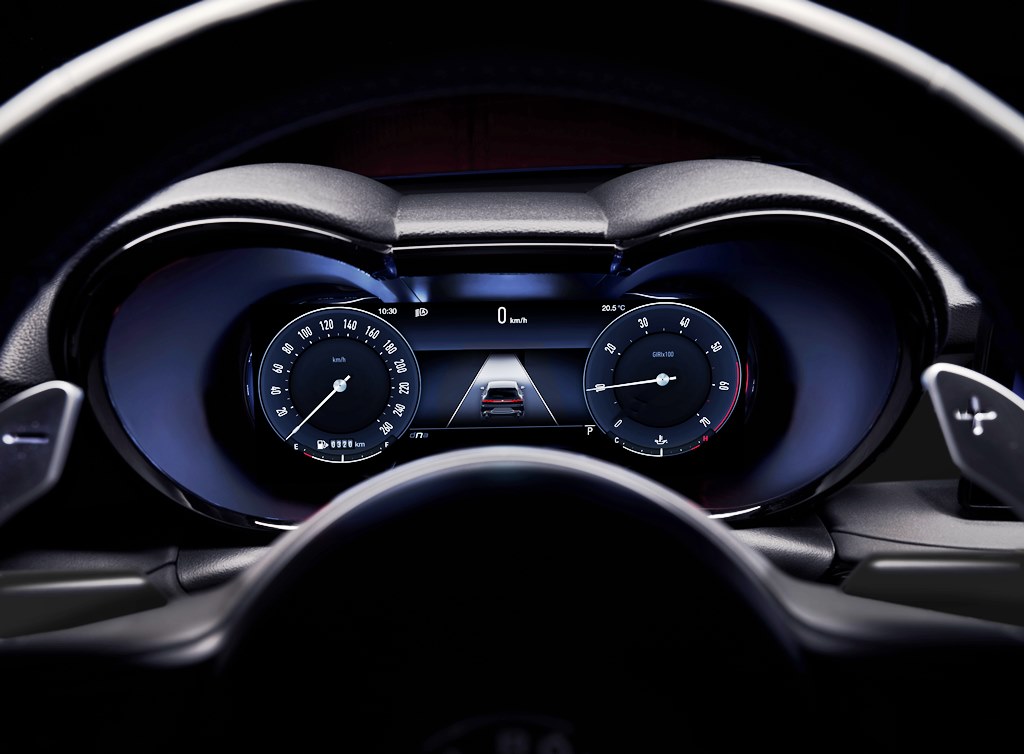 Connectivity with Amazon
Connectivity in a car today is more than just being able to connect a smartphone to the infotainment system. It now encompasses being able to connect to the rest of the world and a major new feature in the Tonale is the built-in Amazon Alexa voice assistant. Where it is available, Secure Delivery Service can set the vehicle as the place to deliver Amazon packages. The doors can be unlocked, and the courier can leave them inside the vehicle. Updates on vehicle status can also be received at home so it will be possible to know the battery charge level and other information. Alexa can also be used to search for nearby restaurants or even adjust lights or heating connected to the home automation system.

NFT for a car
In a world exclusive, the Tonale debuts non-fungible token (NFT) technology. Alfa Romeo is the first automaker to link a car with an NFT digital certificate. The technology is based on the ‘blockchain card’ concept, a confidential and non-modifiable record of the main stages in the life of an individual vehicle. Upon the customer’s consent, the NFT will record vehicle data, generating a certificate that can be used as a guarantee of the car’s overall status, with a positive impact on its residual value. On the pre-owned car market, NFT certification represents an additional source of credibility for owners or dealers to count on. 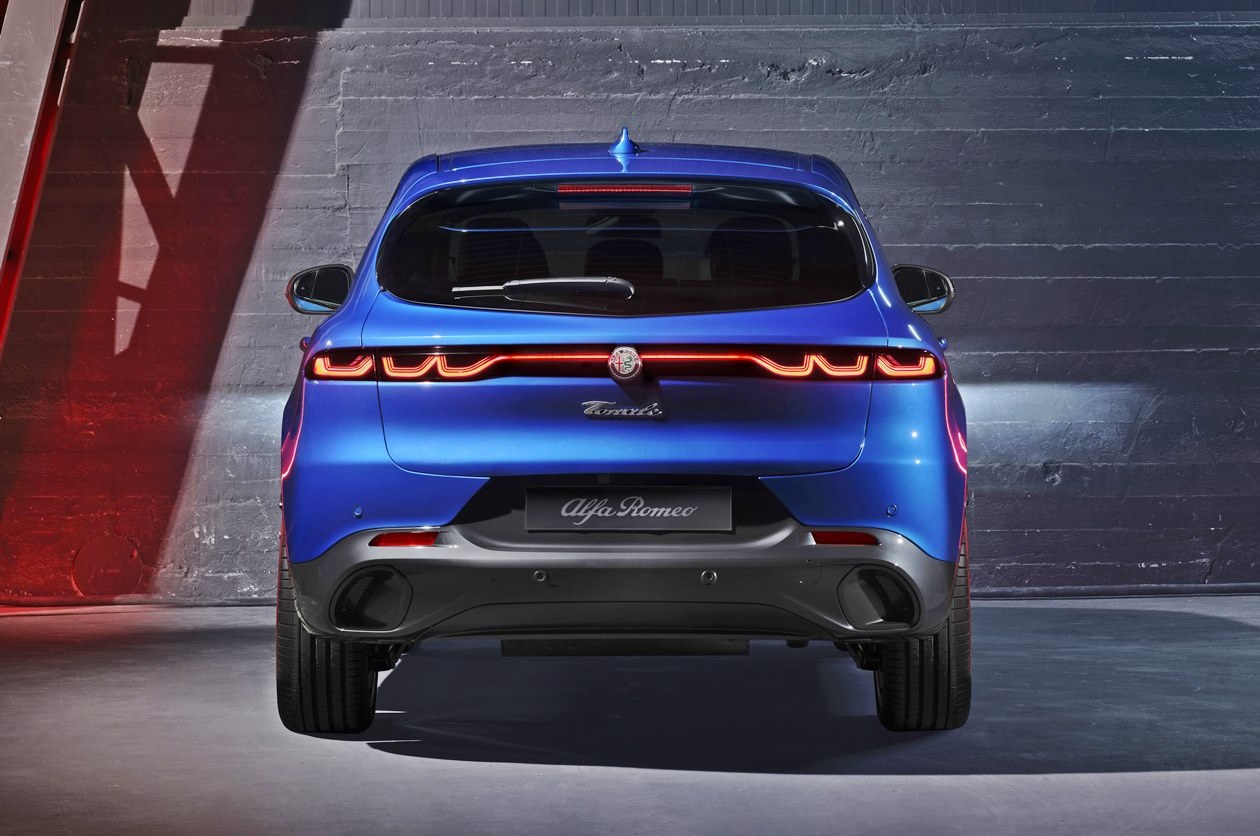