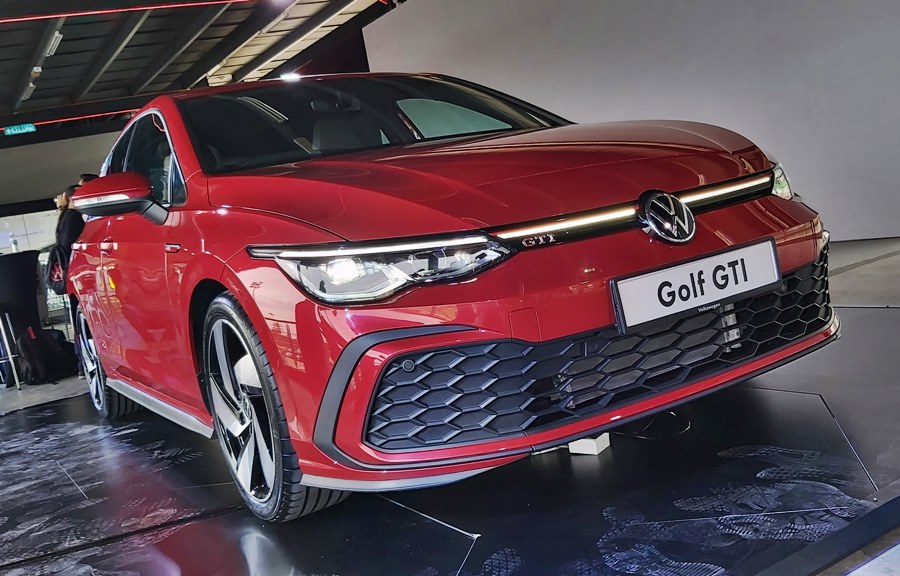 As far back as July last year, Volkswagen Passenger Cars Malaysia (VPCM) had already confirmed that the new Golf 8 would be coming to Malaysia. That was good news but the restrictions of the COVID-19 pandemic and then the global microchip shortages must have delayed the plans although what had not been mentioned also was that the new 8th generation model would be assembled in Malaysia. That too would have added a bit more time as all previous generations came from Germany completely built-up (CBU) and ready for delivery.

And it’s not just the Golf model being assembled here again but it is the GTI – the original hot hatch – which is something special because there are only two other places in the world where it is made: Germany and China. Malaysia’s market size being tiny compared to China makes it a significant development although having started assembly of MQB platform models (the first being the Tiguan) has made this easier. 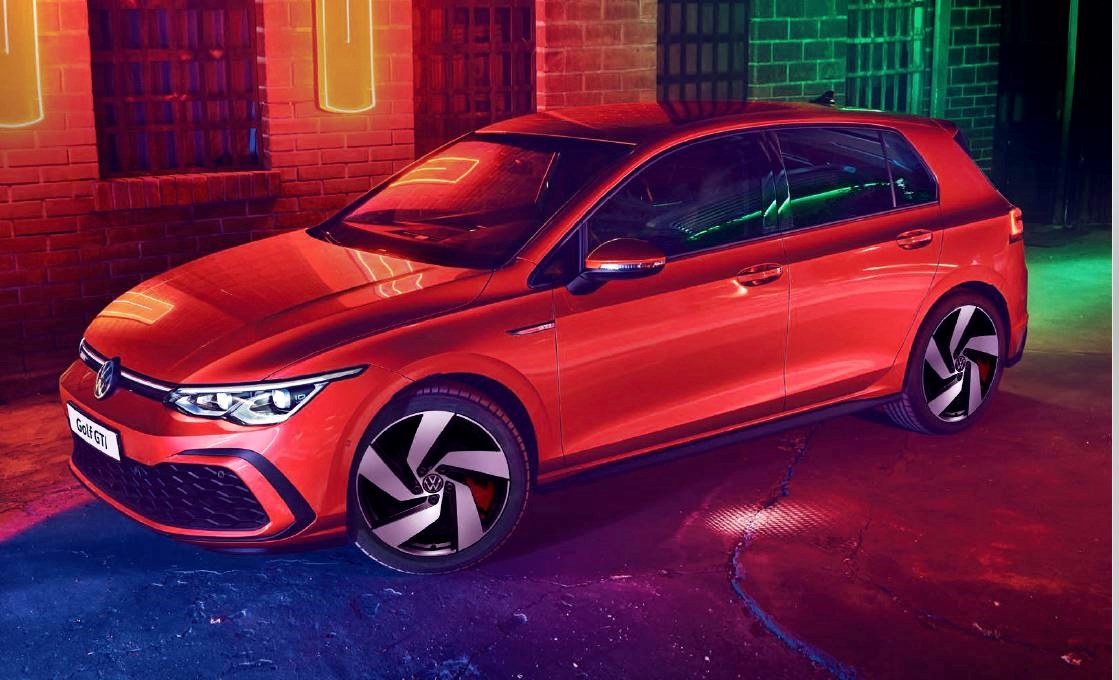 The last time the Golf was assembled in Malaysia was in the mid-1970s when the Mark 1 was introduced as the successor to the Beetle. However, due to changes of distributor and also Volkswagen’s strategy for the region, successive models were not assembled and while Auto Dunia (the distributor from 1984 through to the end of the 1990s) did sell some Golfs, most were imported by independent dealers who focussed on the GTI version that was the most popular.

It was only when Volkswagen Malaysia was established in the mid-2000s that a serious effort was made to market Volkswagens in the country. Of the different models imported, the GTI was the bestseller, accounting for 50% of sales at one stage. Since then, every generation of the GTI has occupied a strong position in the range sold in Malaysia and now, with the 8th generation, local assembly means it can sell in bigger numbers as the incentives that the government offers help offset the production costs to bring the price down to RM211,689 (without insurance and sales tax).

The GTI isn’t the only version that is being assembled locally as there is also the lower-priced Golf R-Line which will be priced within the range of RM155,000 to RM165,000, but will only go on sale a bit later (although you can book one now). The price is certainly lower than the last listed price for the CBU Golf R-Line of the 7th generation (well, 7.5 to be more correct).

This is not to be mistaken for the very powerful Golf R which is also available in limited numbers as a CBU import, priced from RM356,412 (without insurance). That’s a lot more money than the GTI but according to the VPCM people, they are almost running out of stocks of the Golf R. 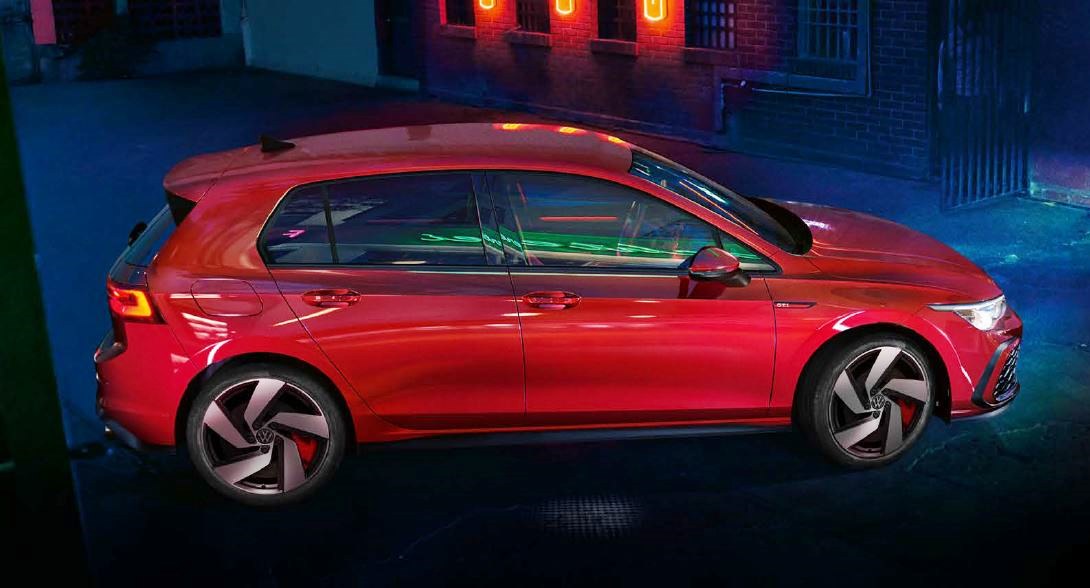 With a model as iconic and legendary as the Golf, especially the GTI, the designers have to be very careful how they shape it. While having to modernise in keeping with the latest trends, there is also a need to retain the heritage so the Mark 8 has evolutionary change from its predecessor and incorporates the signature elements like the honeycomb front grille and red pinstripe trim. But because it has the same basic form as the other versions, it is a ‘wolf in sheep’s clothing’. 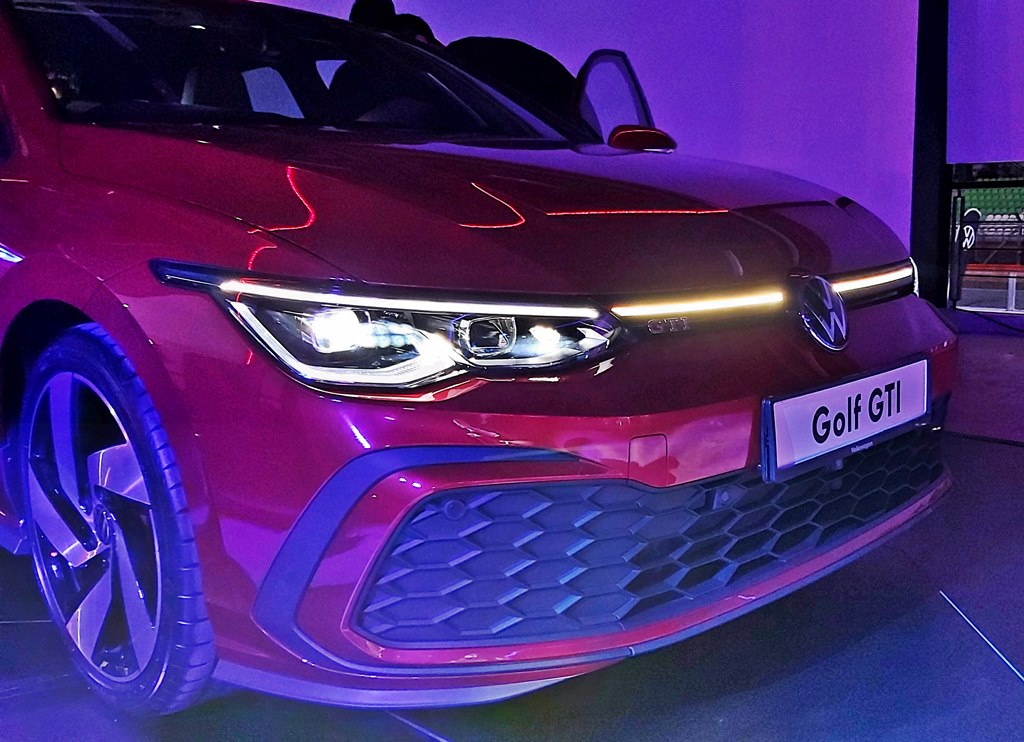 The standard LED headlights are positioned low down and dominate the striking front end in conjunction with the radiator grille. A narrow edge below the bonnet, red in colour, reaches across the entire front. This creates the new face which is also in line with the current new models of the brand.

18-inch Richmond alloy wheels (with 225/40 tyres) with red brake calipers are at each corner while at the rear end, LED tail light units provide a distinct visual signature. There is, of course, the mandatory spoiler on the edge of the roof and under the bumper, individual tailpipes on either side.

Like an increasing number of new models today, the brand or model name is larger on the rear panel and in this case, the ‘GTI’ letters below the VW logo can be spotted from some distance (for the R-Line, ‘GOLF’ is used).

Under the bonnet is a familiar power unit, the EA888, which is a 2-litre 4-cylinder turbocharged engine with direct-injection. With the latest version of the engine, output has improved to 245 ps/370 Nm (15 ps/20 Nm more than the previous GTI 7.5). That’s more than double the power and torque of the original 1.6-litre engine in the Mark 1 which was 110 ps/137 Nm. The proven 7-speed wet-clutch DSG continues to be used to deliver power to the front wheels. 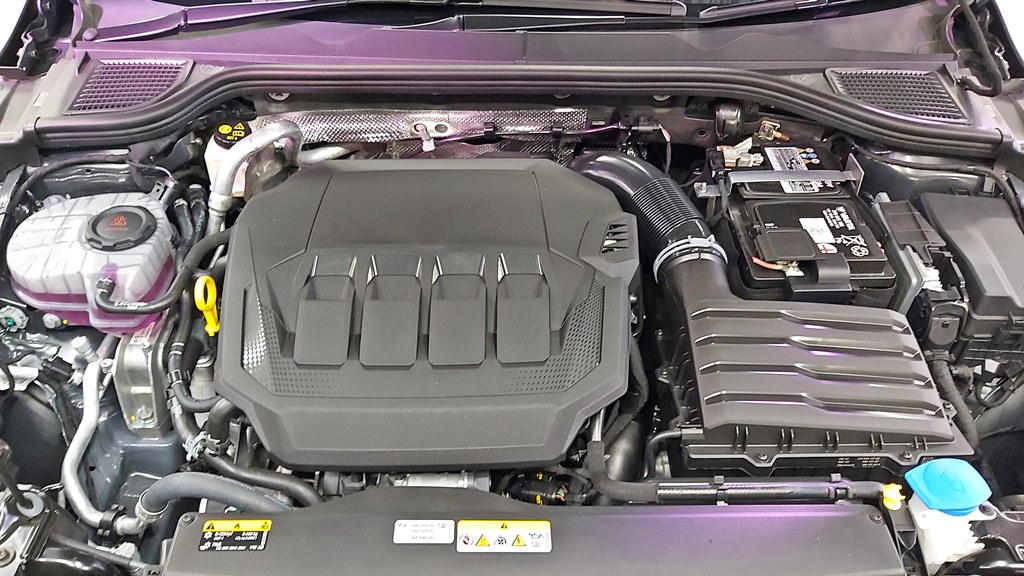 Further along the driveline, there’s an XDS+ Electronic Differential Lock that was initially developed for the Golf GTI (an earlier generation) which enhances handling to be more precise and more neutral. It is an extension of the electronic differential lock (EDS) integrated in the ESP system. It uses the ESP hydraulic system to apply braking forces to the relevant wheel to achieve optimum traction. Thus, the XDS acts like a limited-slip differential to compensate for the understeer typical of FWD cars during fast cornering.

The Golf GTI also comes with a new Vehicle Dynamics Manager (VDM) with Dynamic Chassis Control that has up to 15 settings. The driver can choose pre-set modes for economy or sporty driving, or even customise specific aspects such as the steering, drivetrain and even engine sound. Using a new software application, the VDM intelligently manages the electromechanical running gear systems to provide the driver with an even higher level of control than before. 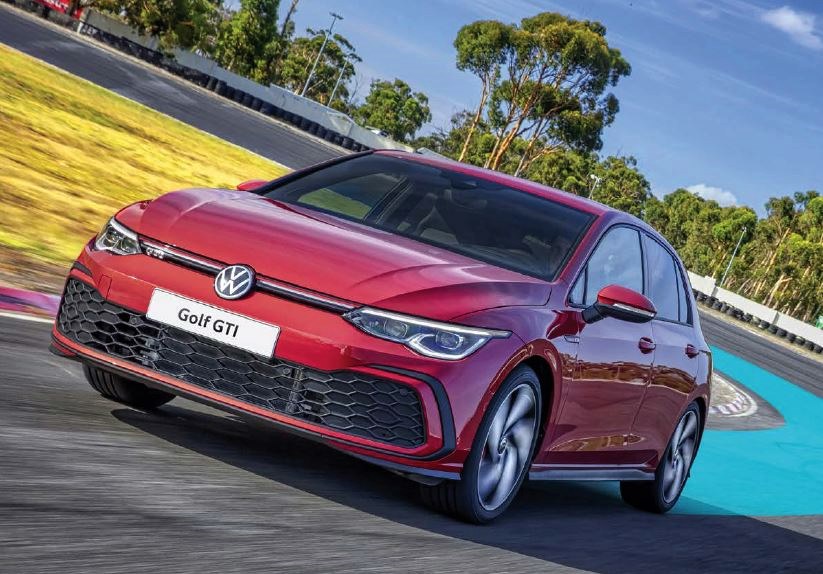 While the suspension layout is similar to the previous generation’s, there has been some reconfiguration of the front struts and the front axle spring rate is said to be 5% higher than before. The use of a new aluminium subframe also takes away a bit over 3 kgs while maximising rigidity. For the multi-link rear axle, the engineers designed a new wheel mount and increased the spring rate by 15% while also upgrading the damping characteristics.

‘Digital’ and ‘connected’ are the two words that are dominant in the description of the new Golf. The clearest demonstration of this is the new Digital Cockpit, which is part of what Volkswagen calls the Driver’s Workspace. Though looking traditional at a glance, the dashboard is actually revolutionary and presents information in a clearer, neater way. Virtually all of the displays and controls are digital with two display screens –  a 10.25-inch TFT panel for the meters and a 10-inch touchscreen for infotainment. Because the instrument panel is digital and graphic, the display can be personalised with different colour themes and views, including a GTI-specific skin. 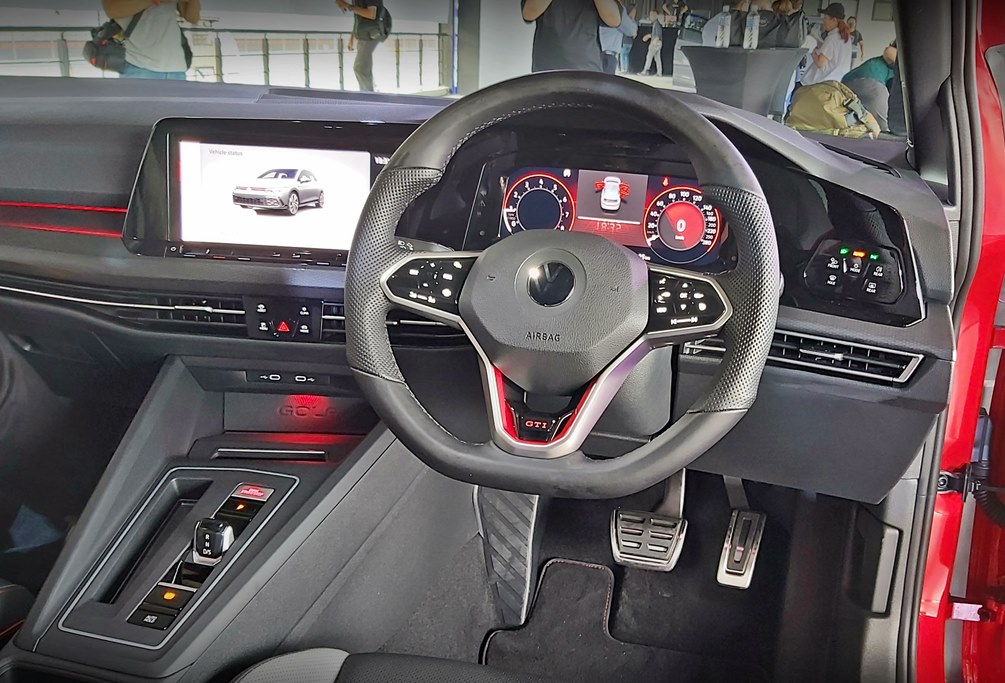 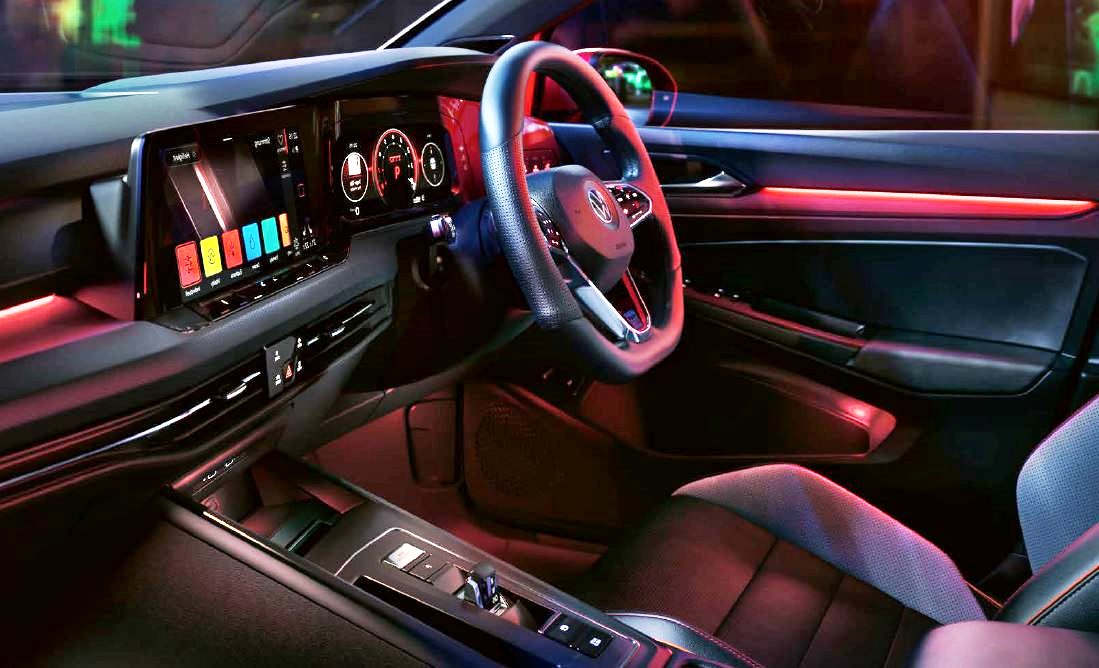 The 10-inch panel towards the middle of the dashboard displays 3D navigation and has connectivity options that include wireless Apple CarPlay and Android Auto to put smartphone apps on the screen and use them. Intuitive operation in the Golf GTI can also be supported by new, natural voice control on request. The system is simply activated by saying ‘Hello Volkswagen’ or pressing the voice button on the steering wheel. The Golf reacts to intuitive voice commands such as ‘Play some music’ or ‘I’m too cold’, activating or adjusting systems as necessary. 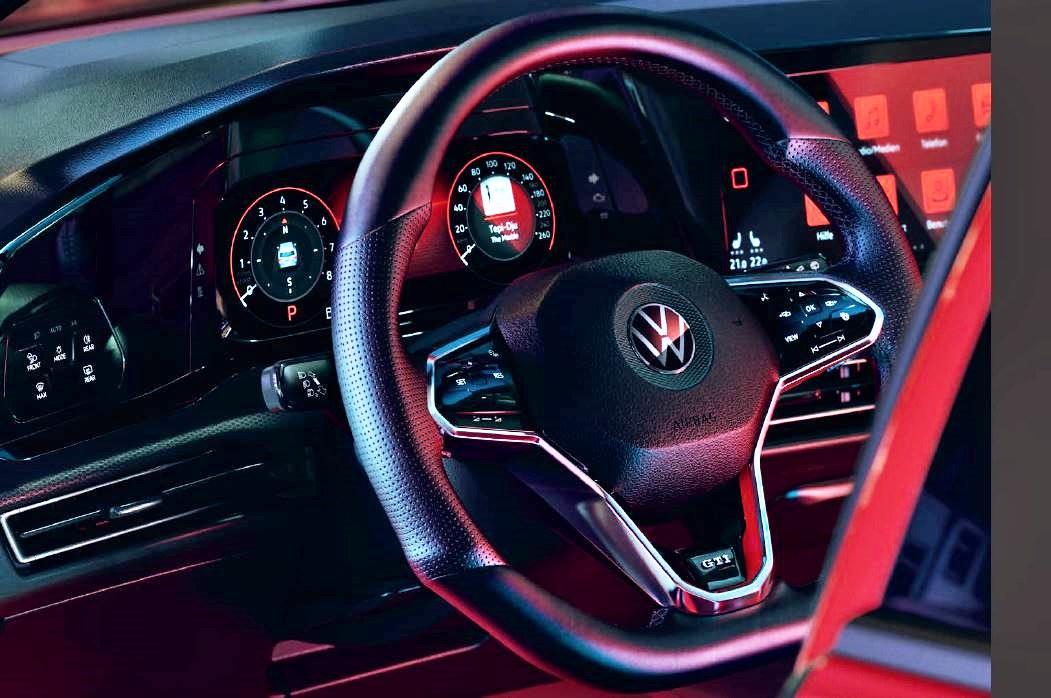 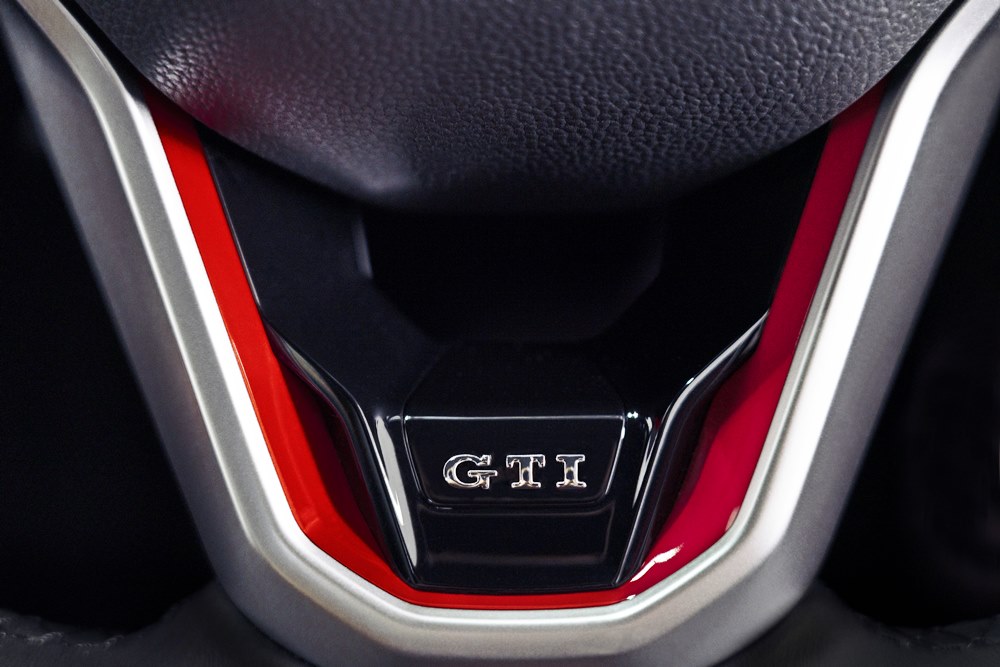 The sporty leather-wrapped steering wheel also deserves highlighting with its multifunction haptic controls. This is new technology so for some (maybe computer gamers will be familiar with it), it may need getting used to. Your fingers don’t need to be ultra sensitive as the feedback is strong enough that you will eventually get used to it.

Ambient lighting around the cabin is the in-thing these days as it can create a more pleasant ambience for greater motoring pleasure. Volkswagen’s interior designers have installed accents of indirect lighting in various places and there are 30 colour choices to personalise from, or you can just pick one of the 5 preset themes (Infinity, Eternity, Desire, Euphoria, Vitality). 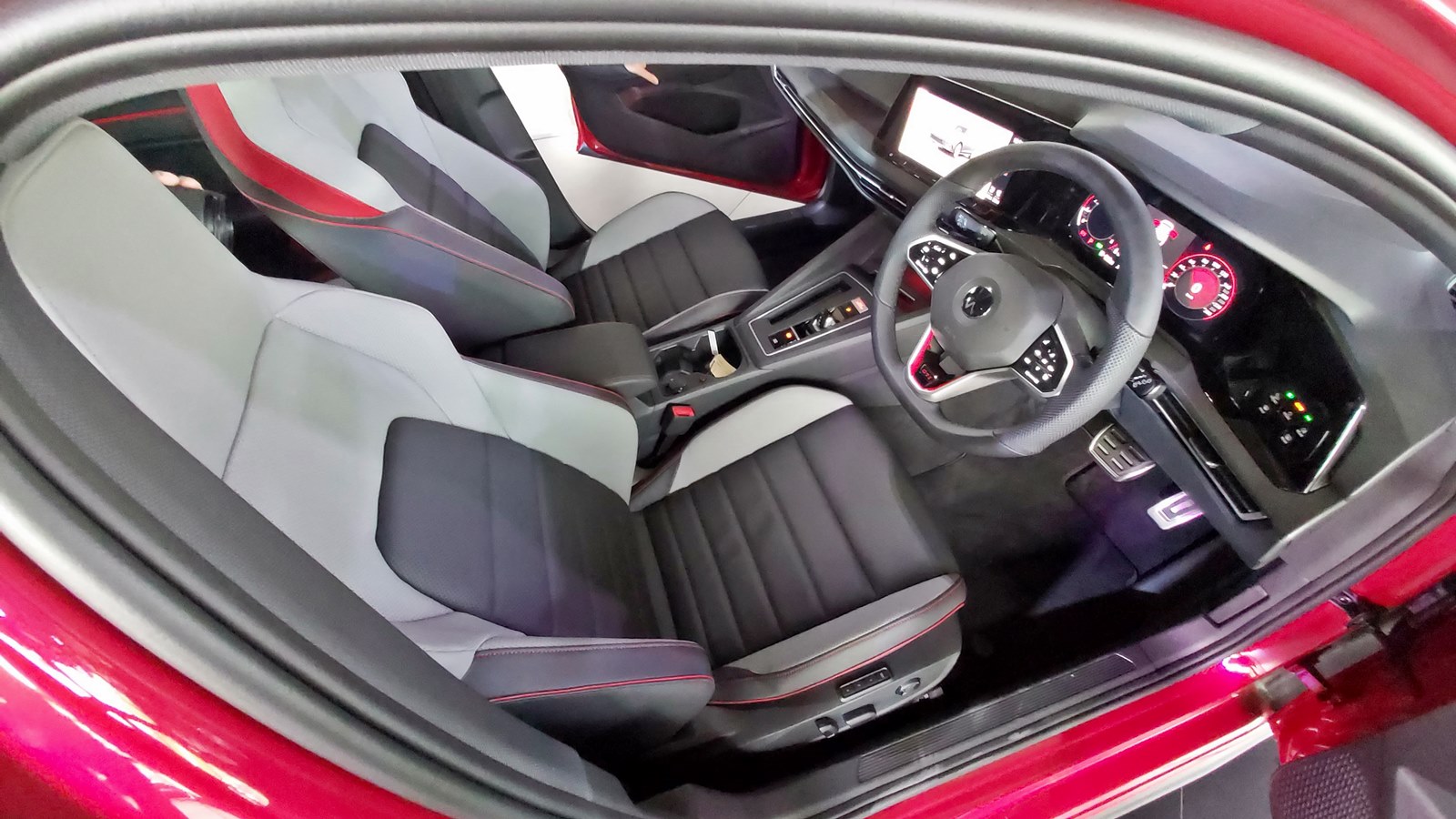 The sports front seats are upholstered in Vienna leather and for the feet, there are brushed stainless steel pedals. 3-zone climate control provides more personalised comfort to each front occupant as well as the rear occupants, while 4 USB ports (two of which are USB-C type) allow almost everyone to be able to recharge their devices while on the move.

Given the high performance of the Golf GTI, it would be expected that the levels of occupant protection would also be very high. Apart from the very rigid structure, the occupants are also protected by 6 airbags on the front and sides of the cabin. Active safety systems help the driver to maintain control or stabilise the car and if there is a major collision, the Automatic Post-Collision Braking System activates to prevent the car from ‘bouncing’ about and crashing again. 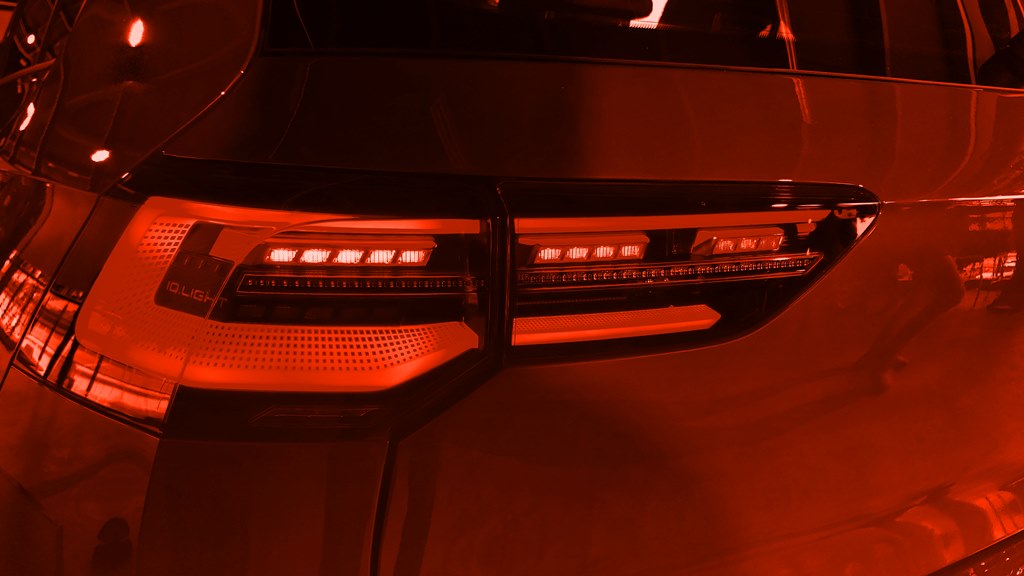 Like other locally-assembled Volkswagen models, the new Golf GTI comes with a 5-year/unlimited mileage warranty and free scheduled maintenance for the first 3 years, plus complimentary roadside assistance for the first 5 years.

To locate a showroom in Malaysia to view and test-drive the new Golf GTI, visit www.volkswagen.com.my.