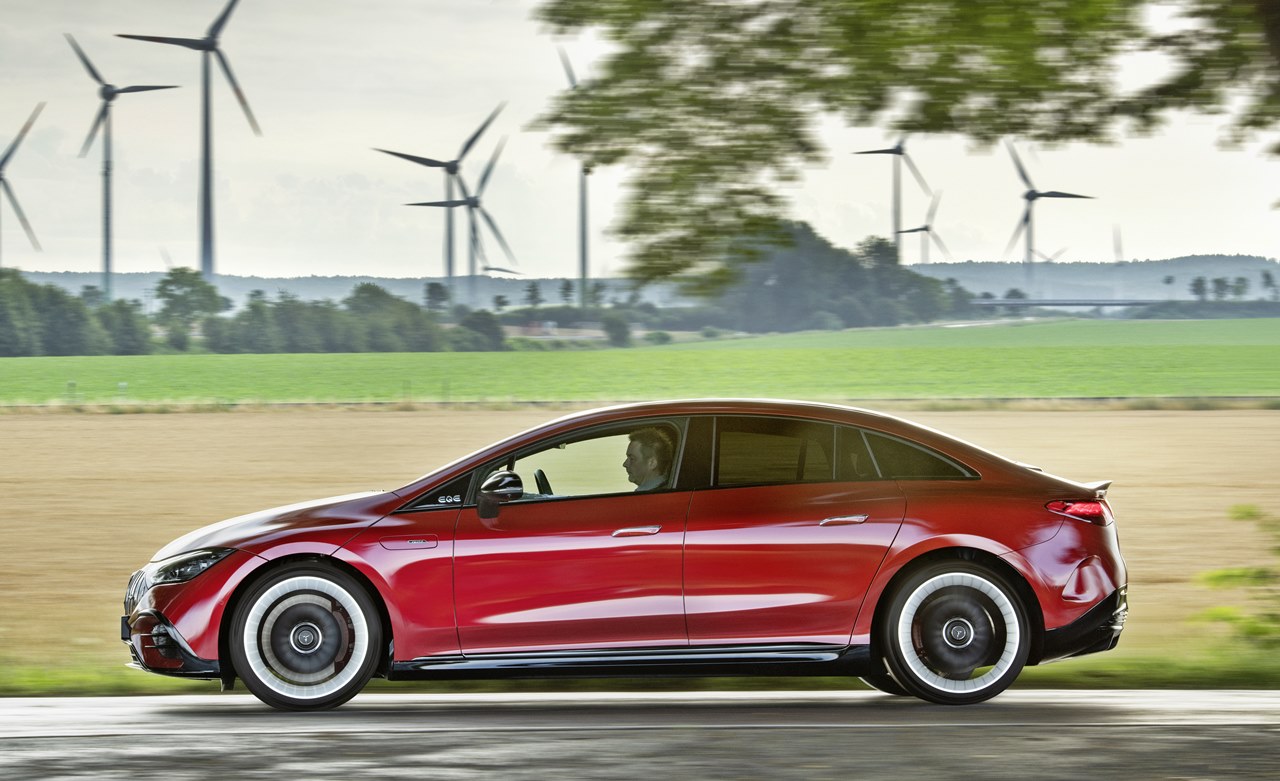 Since 2019, the Mercedes-EQ family of battery electric vehicles (BEVs) has been growing steadily and by the end of this year, it will probably meet its original target of 10 models by the end of 2022. Over at Mercedes-AMG, a similar push is being made in electrification and so far, one model has been introduced – the EQS sedan last September. Now comes a pair of new sedans – the EQE 43 4MATIC and EQE 53 4MATIC+ – which are the high-performance versions of the EQE.

The new sedans also sit on the same EVA2 platform although the company is now developing its own platform for BEVs which will be used towards the end of the decade. In the meantime, it will adapt the Mercedes-EQ models in the usual AMG way in the areas of drive, suspension, brakes, sound, exterior and interior design, and equipment. 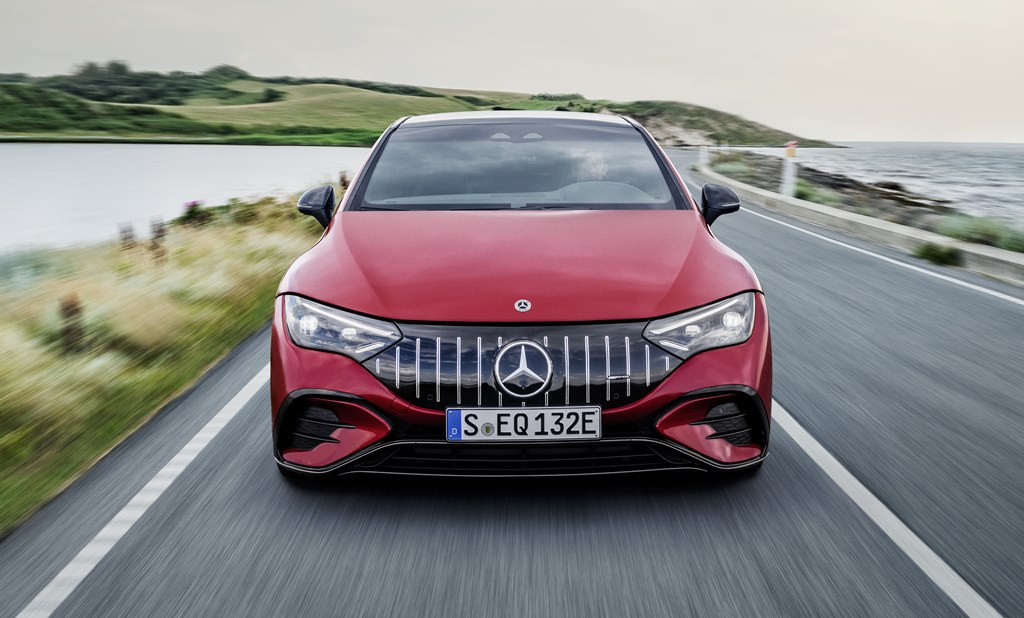 Dual-motor powertrains
Both the new Mercedes-AMG models have dual electric motors, one on each of the axles to provide fully variable all-wheel drive. The AMG-tuned motors are characterised by an optimal balance of power increase, efficiency and noise comfort.

For higher performance, the motors of the EQE 53 4MATIC+ have adapted windings and laminations, higher currents and a specific inverter. This enables higher engine speeds and greater power generation during acceleration and at top speed. The electric motor on the rear axle is particularly powerful with its 6-phase design, based on two windings with three phases each. 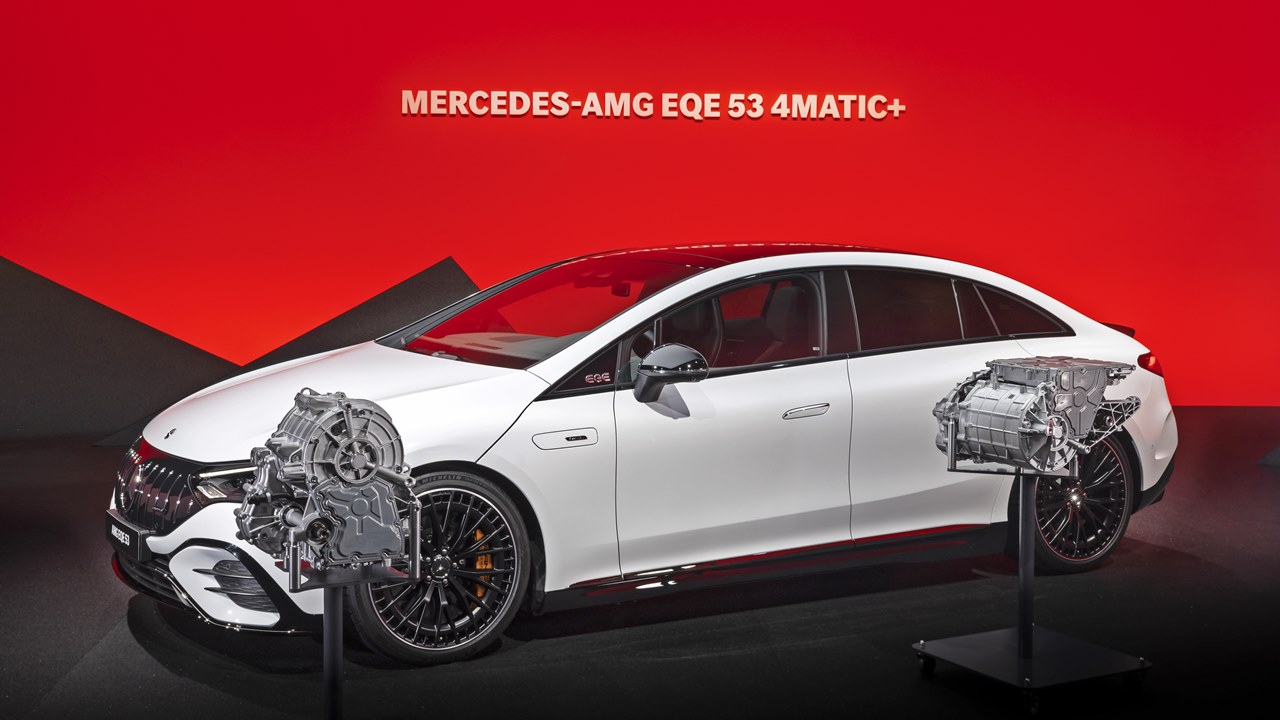 Electric motors generate a lot of heat too so cooling is just as important as with a combustion engine. The AMG engineers have developed a highly resilient thermal concept which allows repeated acceleration manoeuvres with consistently high performance. The sophisticated design has a ‘water lance’ in the shaft of the rotor to cools it.

Other AMG-developed elements in the cooling circuit include special ribs on the stator and the needle-shaped pin-fin structure on the inverter, which is made of high-performance ceramics. In addition, there is the transmission oil heat exchanger where the oil is pre-heated during cold starts to increase efficiency. 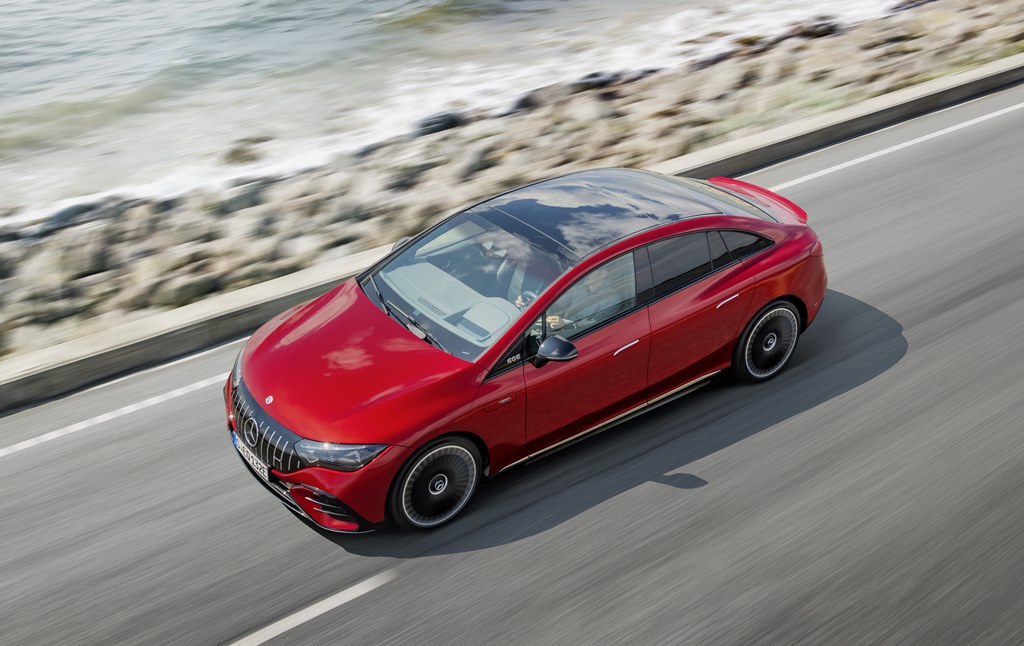 New-generation battery
The new Mercedes-AMG models are equipped with a powerful 328V high-performance drive battery pack manufactured using the latest lithium-ion technology. It has a usable energy content of 90.6 kWh and the battery management system in the EQE 53 is tuned specifically for AMG. Updates for the battery management system can be installed over-the-air for continuous improvements over the life cycle.

Another advantage of the new battery generation is the short charging times. The energy storage system can charge with up to 170 kW at fast charging stations with direct current. In this case, electricity for 180 kms (WLTP) can be recharged in 15 minutes, it is claimed. 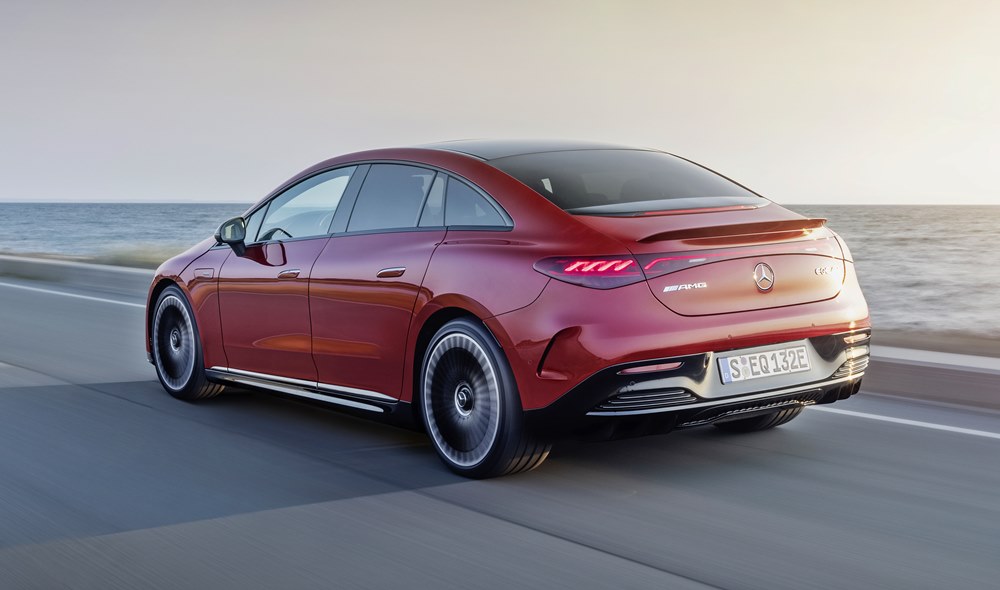 The AMG sound
One area which enthusiast drivers feel will disappear will be the emotive sounds from combustion engines, which is an important part of the AMG driving experience. Well, this will still be available from AMG BEVs although it will be artificially created. A sound system creates a unique sound with the help of special speakers, a bass actuator and a sound generator. Known as the AMG SOUND EXPERIENCE, the tonality and intensity of the sounds generated are tuned to the driving character or the driver’s wishes, both inside and out. There are ‘Authentic’ and ‘Performance’ programs with three variations each.

In other respects, the two sedans have AMG-specific equipment that provides sportier differentiation from the Mercedes-EQ EQE. The black panel grille is flanked by DIGITAL LIGHT headlamps that feature a specific AMG projection when opening and closing the vehicle. In addition, there are air diffusers on the left and right in high-gloss black for the AIR CURTAIN effect. Various other aerodynamic measures improve the driving dynamics and efficiency, reducing rear lift without significantly changing drag. 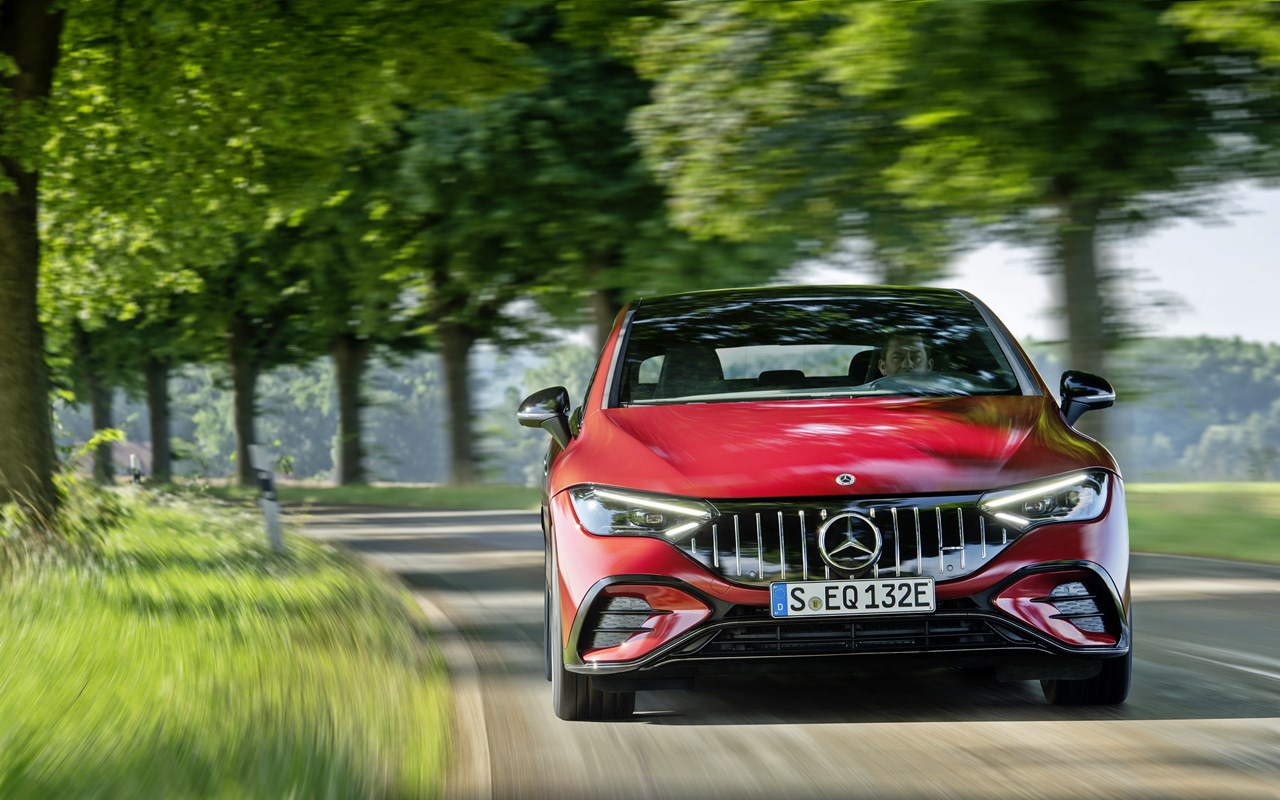 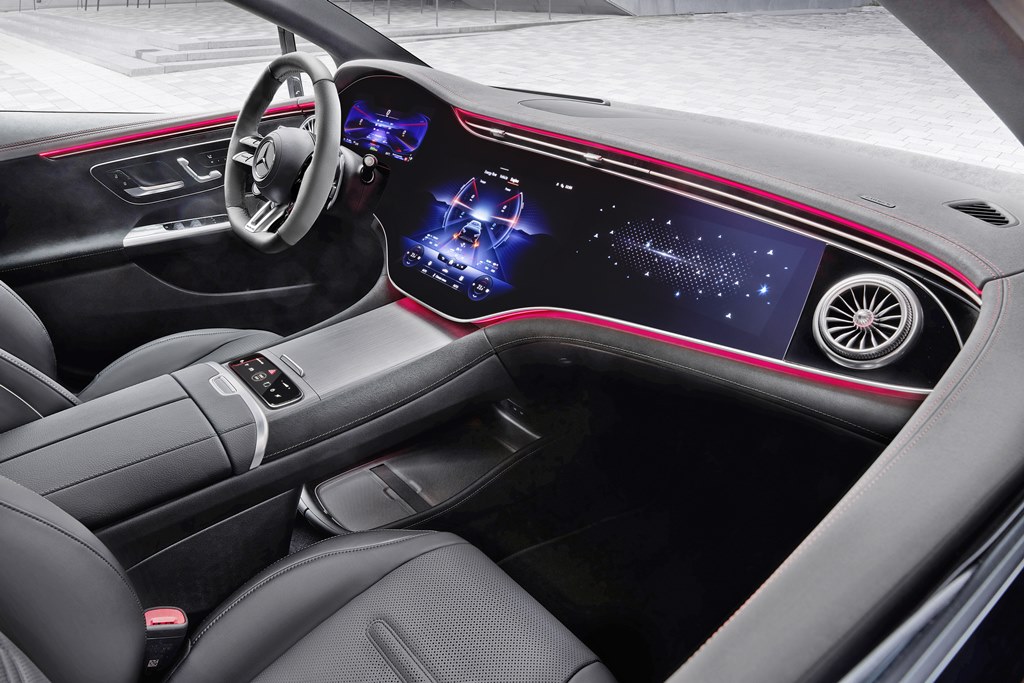 Likewise, the interior has the typical AMG features that give a sporty ambience. These include AMG seats with individual graphics and special seat covers in ARTICO man-made leather with MICROCUT microfibre and red decorative topstitching. AMG’s own Performance steering wheel has a twin-spoke design with a flattened bottom. Buttons and switches on the steering wheel can also operate the optional Hyperscreen which has more than 15 information and setting options. 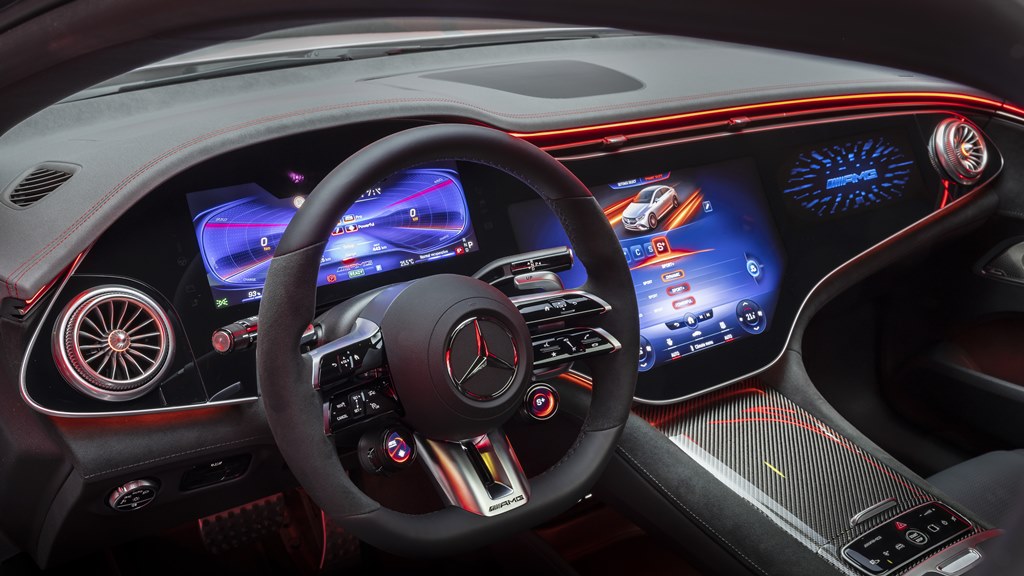 MBUX (the intelligent Mercedes-Benz infotainment system) offers a range of additional AMG functions that emphasise the performance character. This is particularly true of the distinctive displays in the instrument cluster, as well as the multimedia display and the Head-Up Display. 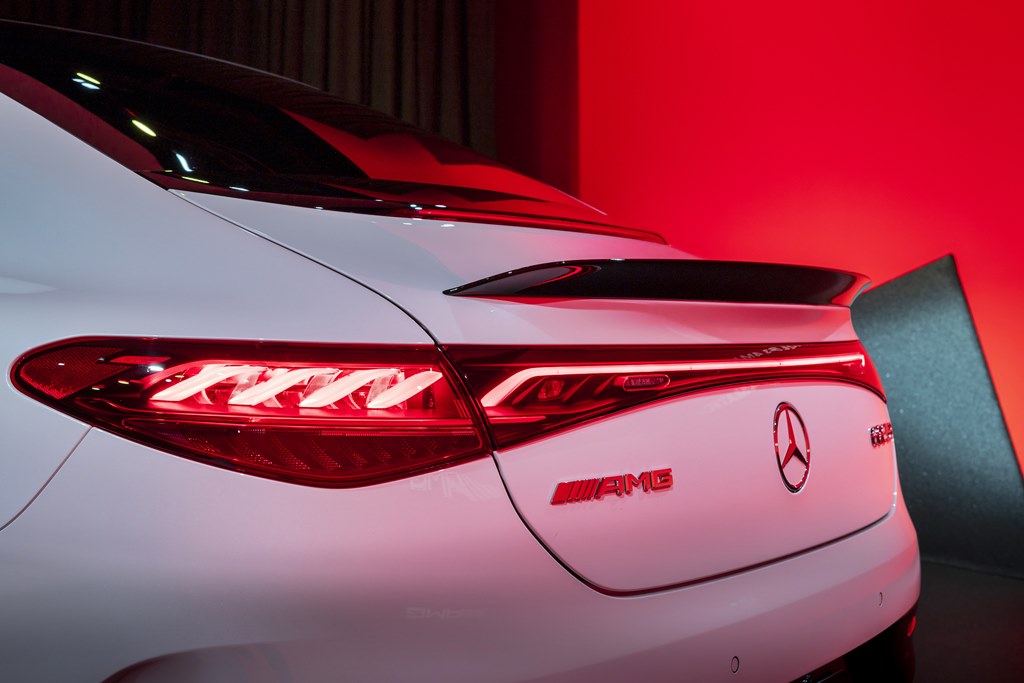