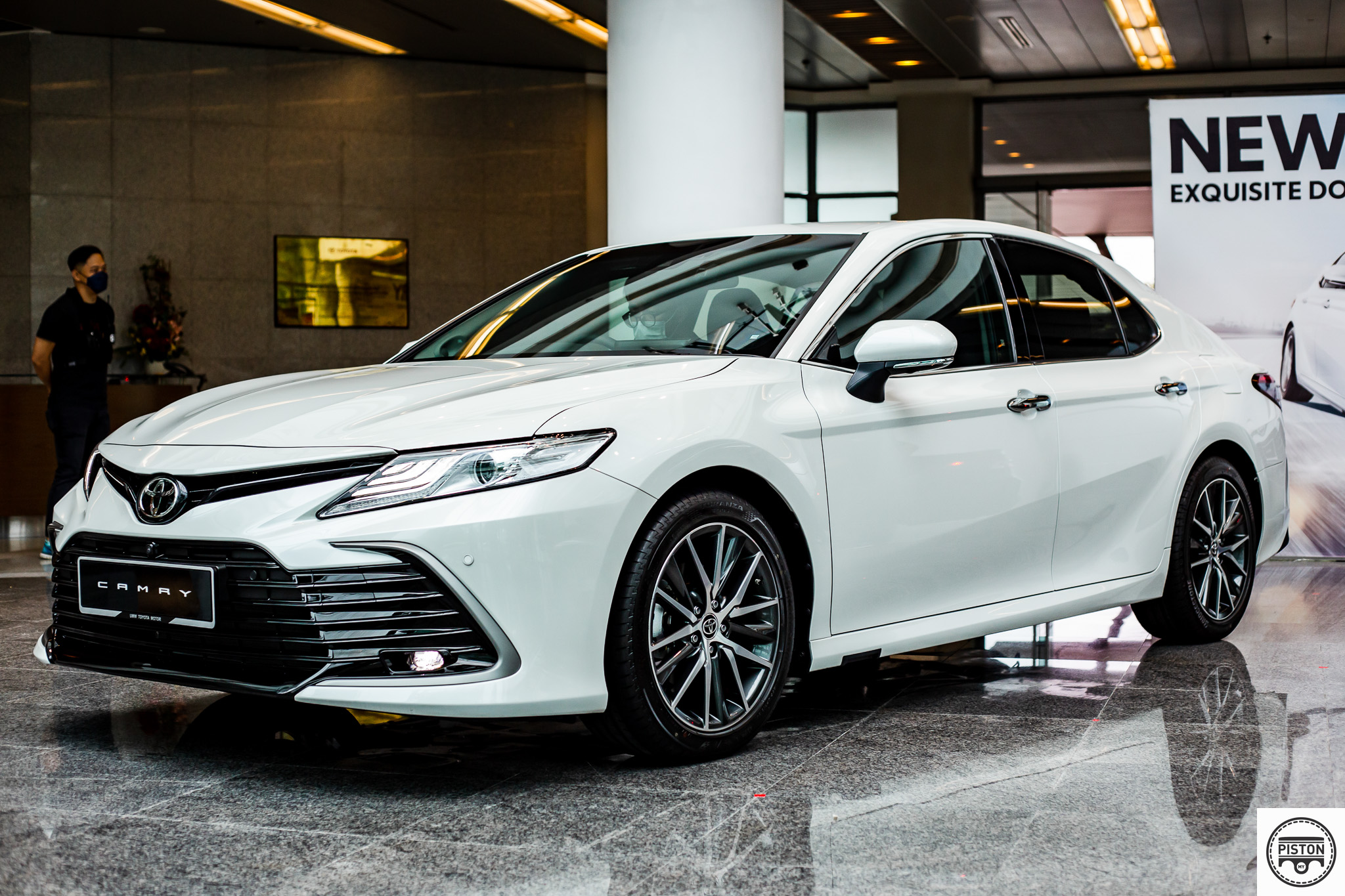 The current Toyota Camry was introduced in 2018 in Malaysia and in the normal course of a model cycle, it would be around now that some freshening takes place. Typically, this involves cosmetic changes and perhaps the addition of an extra feature or two so that the model remains competitive against newer rivals with the latest features.

Rarely would you find the model getting a new engine and in fact, powertrains used to be maintained for at least a decade because it cost so much to develop them. But these days, the market is more competitive and so changes have to be more frequent than before. 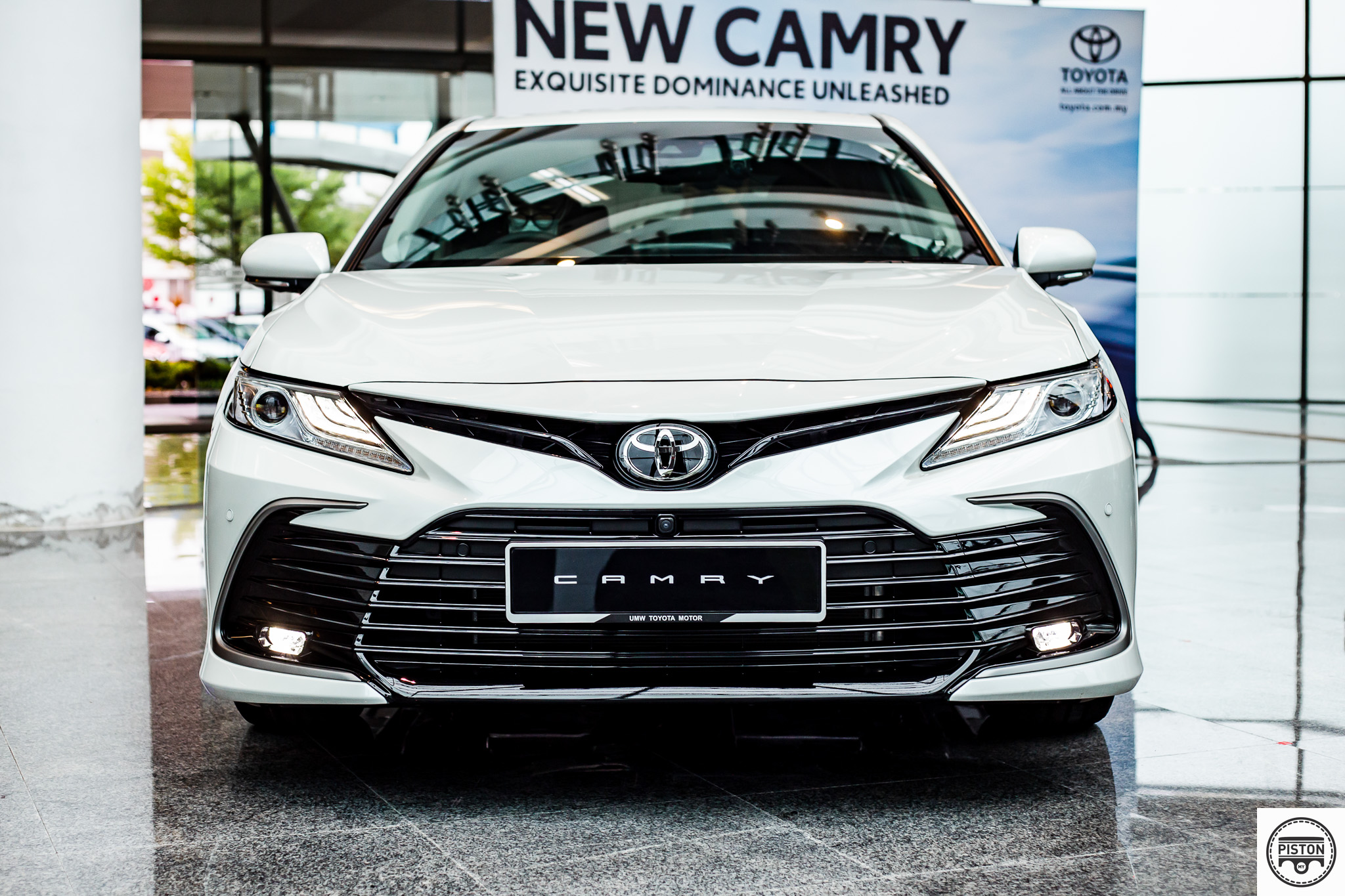 Dynamic Force engine
That’s the case with the latest Toyota Camry 2.5V which gets a brand new engine. It’s from the Dynamic Force family which is a new range of engines that use high-speed combustion technologies to achieve what is claimed to be world-leading thermal efficiency for production engines. With the significantly reduced energy losses, the 4-cylinder engine produces 209 ps/253 Nm, which represent increases of 25 ps (+13.6%) and 18 Nm (7.6%), compared to the previous engine which had the same displacement. 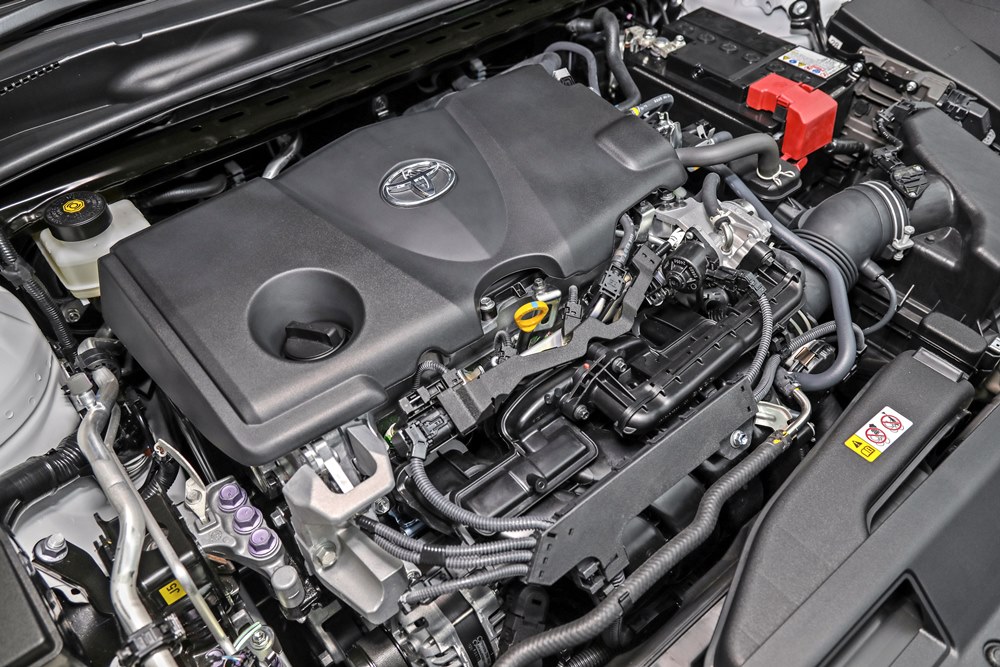 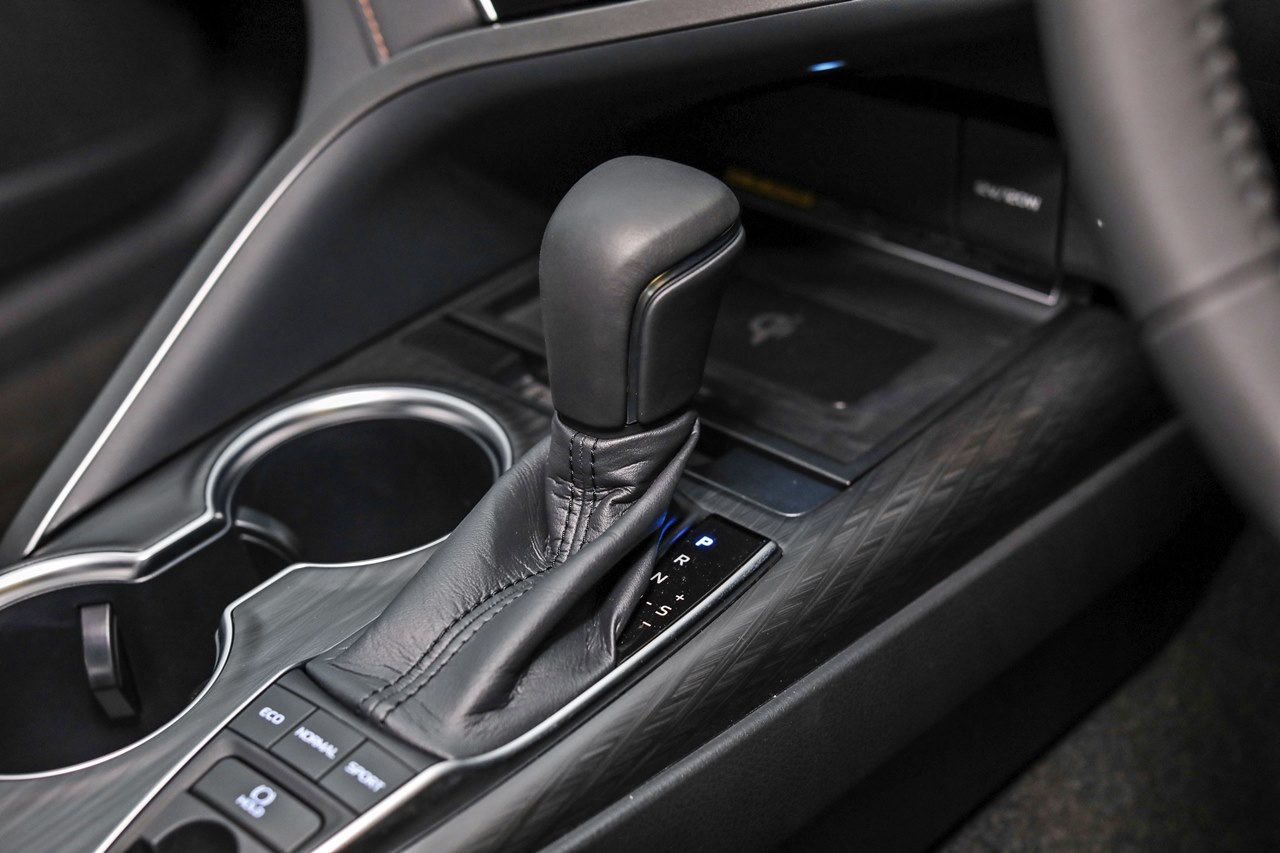 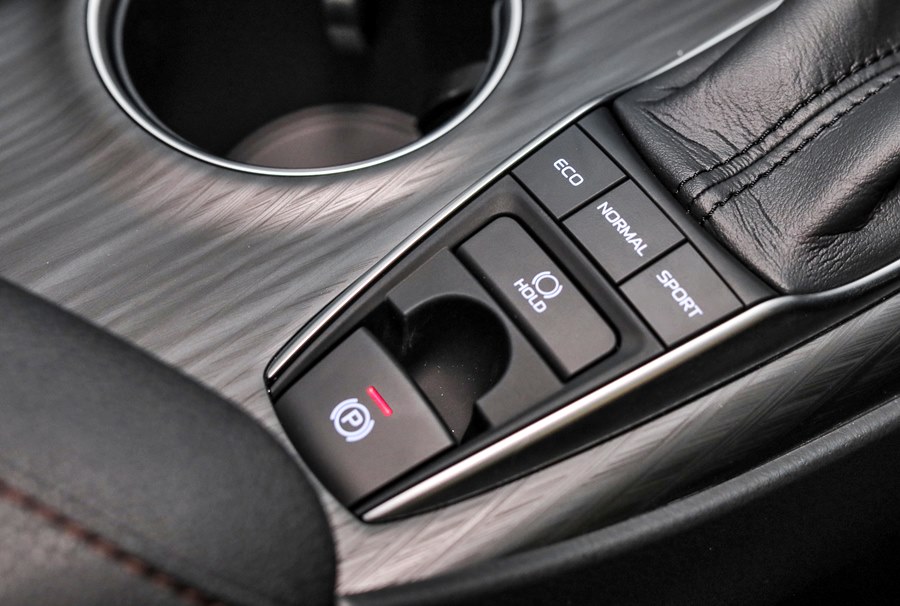 The Dynamic Force engine was developed together with the Toyota New Global Architecture, or TNGA in short, which is a lightweight, high-performance platform used for this generation. Having developed the engine together with the TNGA has provided better optimization with the engineers having greater flexibility to enhance not just fundamental vehicle performance but also styling.

More intelligent safety systems
The other area which has received upgrading is the Toyota Safety Sense (TSS) system. This integrates 5 active safety systems which use a camera and radar. The two sensors scan the road ahead to identify other vehicles as well as recognize lane markings. The information and imagery is then constantly analyzed and if an accident is predicted, the driver will be warned. If no corrective action is taken, then the computer will take its own action, like activating the brakes.

For the new Camry 2.5V, the camera has increased recognition capabilities and can also detect pedestrians and cyclists during the day as well as at night when lighting conditions are low. 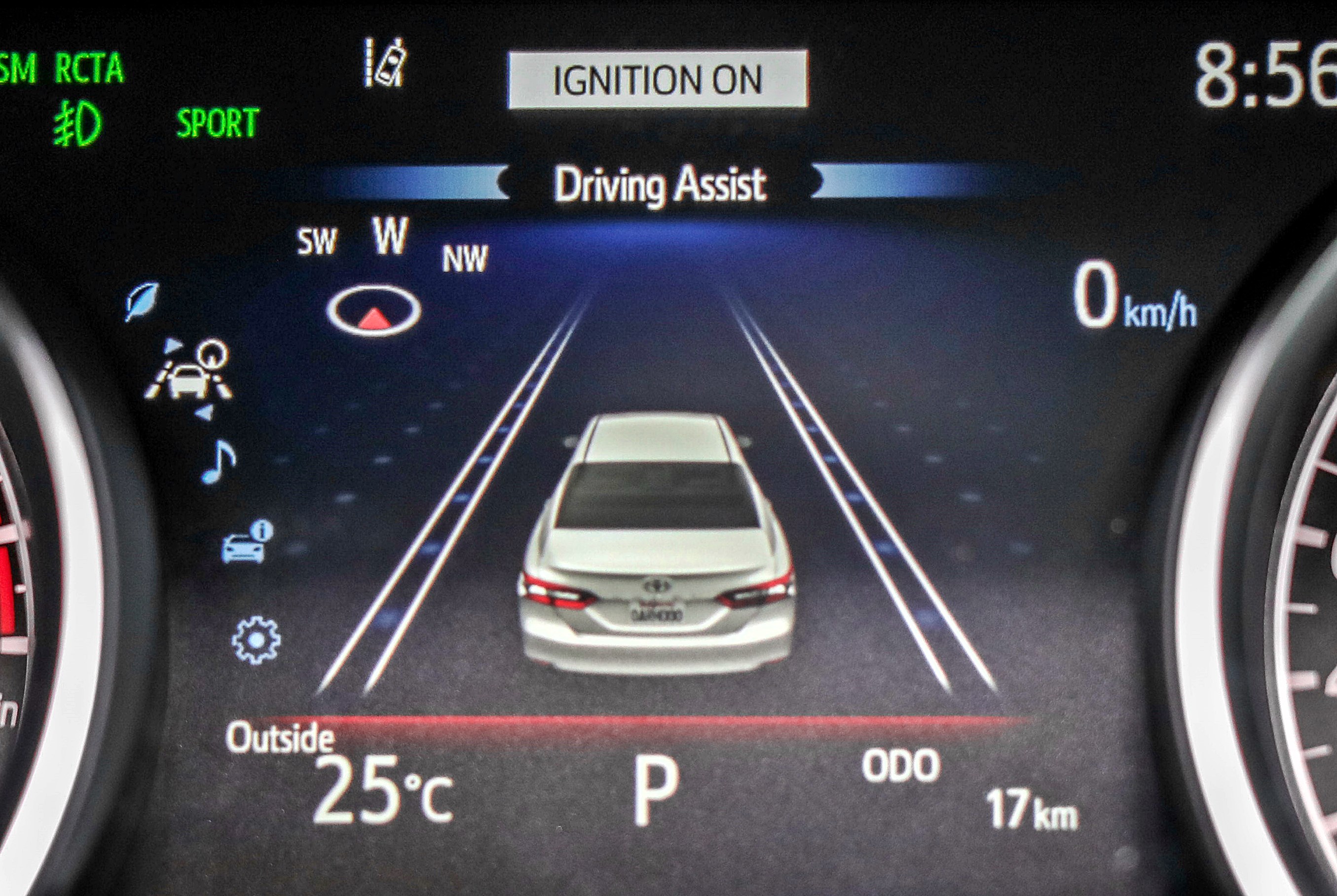 TSS includes a lane-keeping capability and this is useful on long journeys. By keeping the car within its lane, the driver will be less fatigued as steering effort is reduced. More importantly, it can warn the driver when he or she loses concentration and the car starts to move out of its lane. Again, if corrective action is not taken, the system will make steering corrections to guide the car back safely.

Dynamic Radar Cruise Control is part of TSS but earlier, it had limitations in speed. With the new Camry, the system has been upgraded to be active at all speeds. This means that the car can even slow down to a stop if the vehicle in front stops, and then resume moving when the vehicle ahead moves. It can make driving in start/stop traffic less stressful and the only thing the driver has to do is steer because a safe gap will always be maintained. 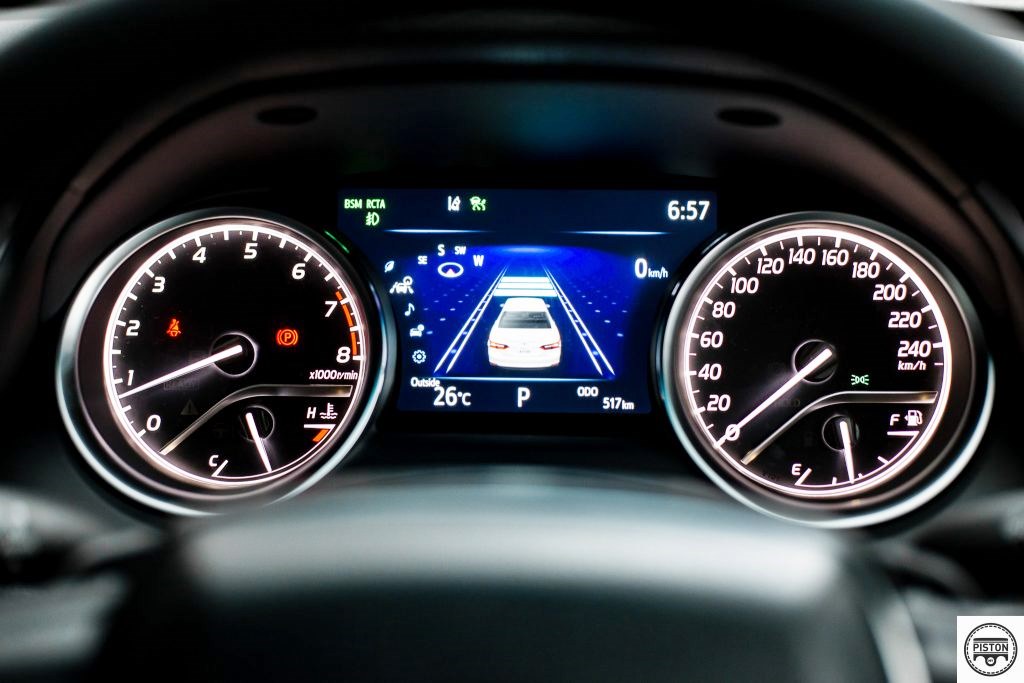 The final sub-system of TSS is Adaptive High Beam which basically adjusts between high and low beams automatically. This is to provide illumination that is as strong as possible but switching to low beams when necessary to avoid blinding oncoming drivers. Incidentally, the headlights have new Bi-Beam LEDs which deliver even stronger lighting.

While the Rear Cross Traffic Alert was available in the previous model, the system in the latest Camry has been improved with the addition of an automatic braking capability (RCTAB). Besides just alerting the driver of a vehicle approaching from the left or right as the car is being reversed out of a bay, the system will also brake the car if the driver does not stop. This can prevent an accident or reduce the severity if it does occur. 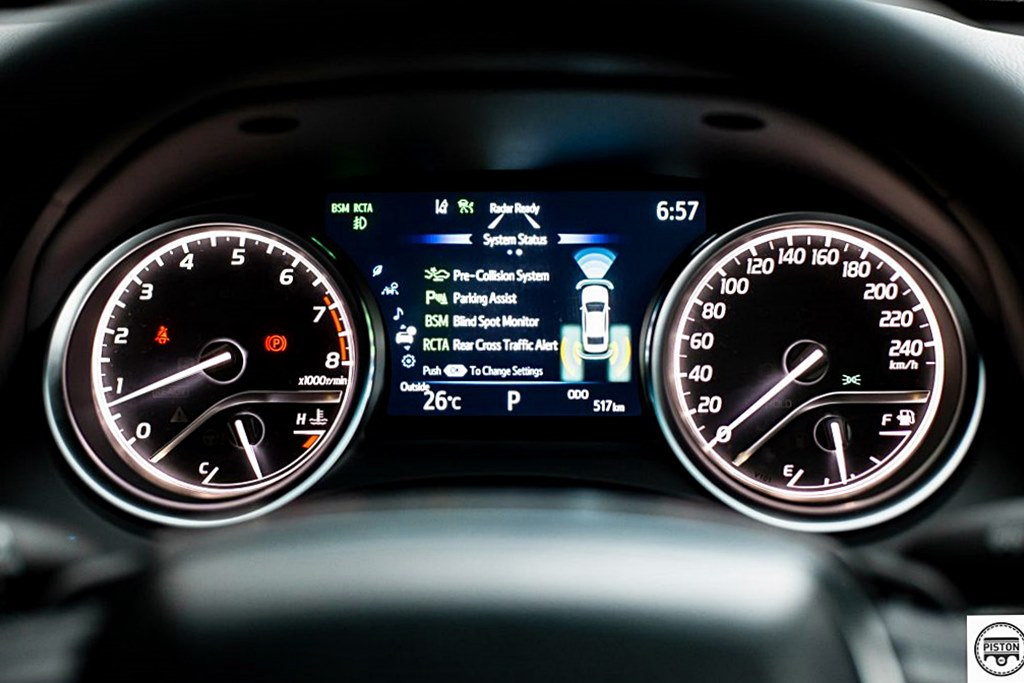 Newly added, ICS is an advancement over having just sensors at the front and rear bumpers to detect obstacles or walls when parking. It is ‘intelligent’ as it will determine if there is a risk of the car hitting an obstacle like a wall or post and if so, the brakes will be applied to stop the movement of the car. This will help prevent damage to the car’s bodywork.

More scope for cabin packaging
With the adoption of TNGA, the 8th generation Camry could be completely redesigned with a wider scope than ever before. This allowed for a completely new interior layout combining functionality, advanced styling and a high degree of personal craftsmanship. The layout has a strong focus on the driver’s area and to improve viewing for the driver, the centre display screen position has been set higher, located above the centre air vents. 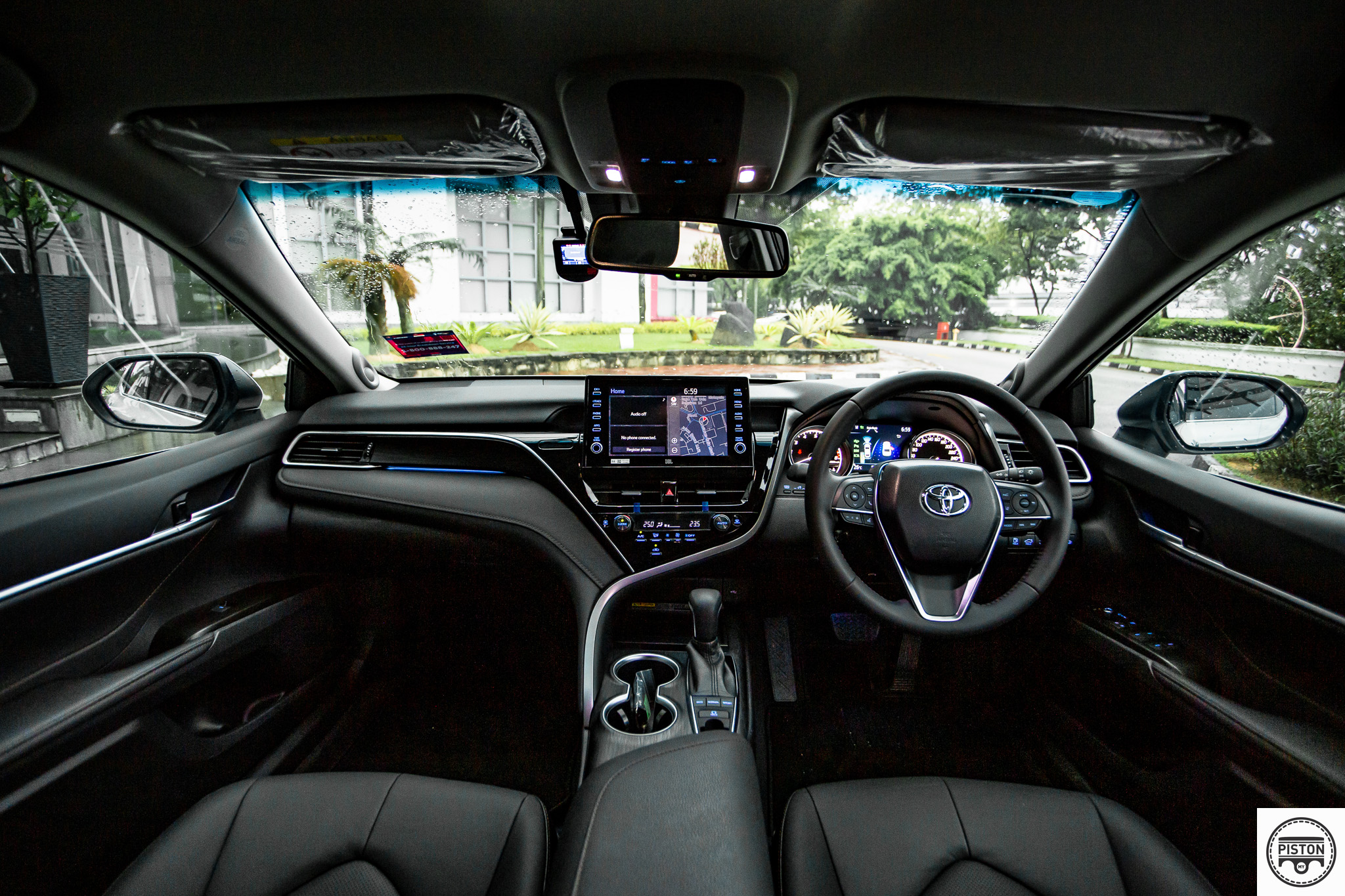 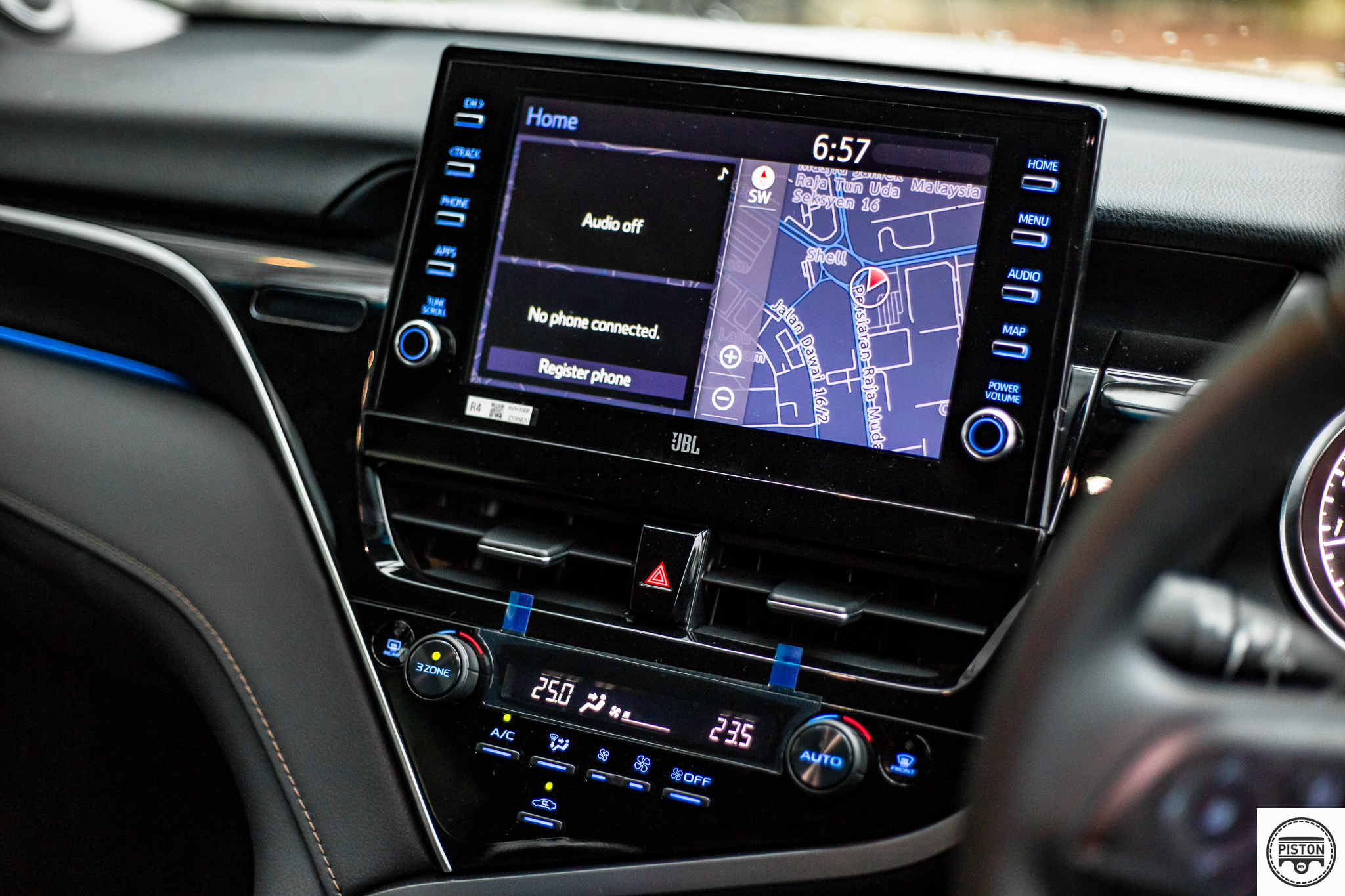 Besides the Optitron meters, the driver can also refer to the Head-up Display (HUD) projected on the windscreen ahead of the steering wheel. Information shown is the road speed, gear position, Driving Support System (directions, ACC display, LDA Display, Parking Sensor), audio details and TSS warning alerts. The HUD, adapted from aircraft displays, allows the driver to keep his or her eyes on the road ahead for better driving safety.

New futuristic grey ornamentation has been added to provide an elegant and neat impression. Based on a composite pattern with straight lines and overlapping an organic base pattern, the ornamentation evokes an expansive and layered feel that creates an elegant ambience. 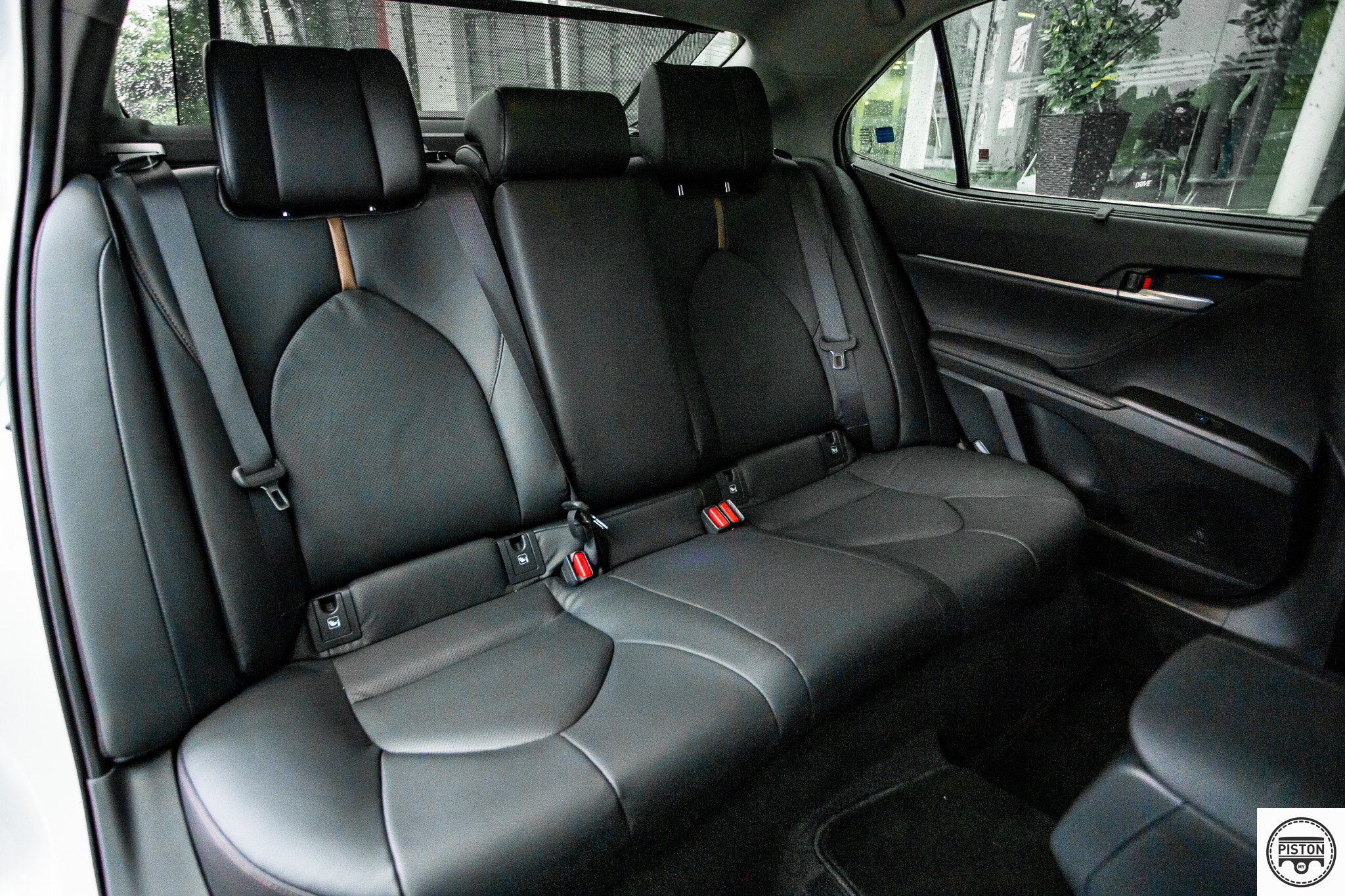 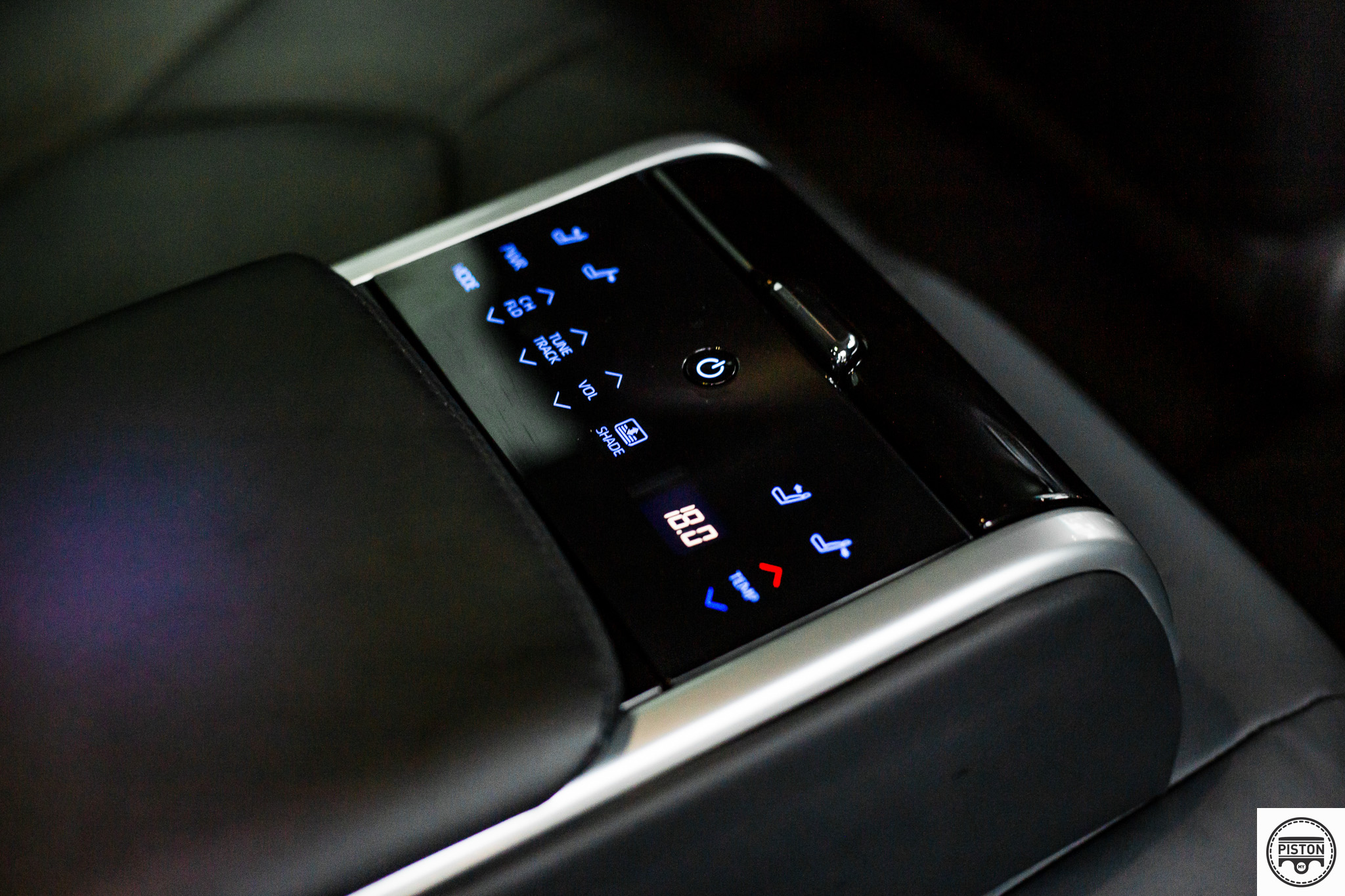 Given the popularity of the Camry as an executive sedan, much attention has also been given to the comfort for the rear passengers. New for 2022 are power adjustment for the rear seats with the outer seats able to recline by 8 degrees for a more comfortable seating position. There are also larger headrests fitted for enhanced comfort. Adjustments for the seat as well as the rear air-conditioning, sun-shade and audio system can be conveniently done on the control panel within the centre armrest – something which you would find in much more expensive luxury models.

Also new for 2022 is the Tri-zone Automatic Climate Control system which allows the driver, front passenger and rear passengers to independently set their own temperature. This system is comparable to those in luxury models, and provides better individual comfort for every occupant.

ON THE ROAD
In earlier years, the Camry was seen as an ‘uncle’s car’, the sort driven by older people who might not care about driving dynamics and performance. But with this generation and its more aggressive, bolder looks, it’s hard to think of it that way. Of course, looks can only go so far and if it’s all looks and no go, then it’s still an ‘uncle’s car’. 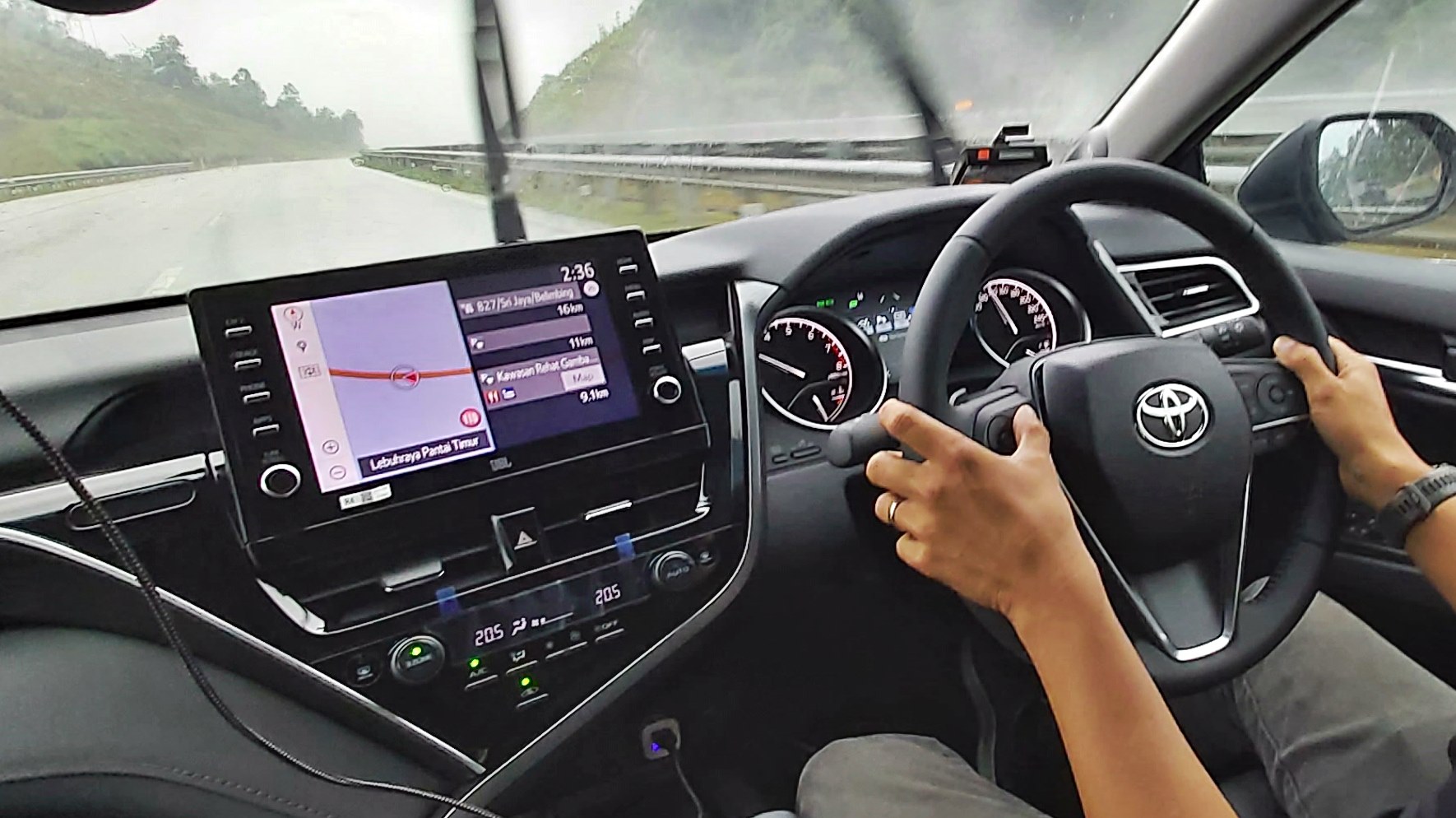 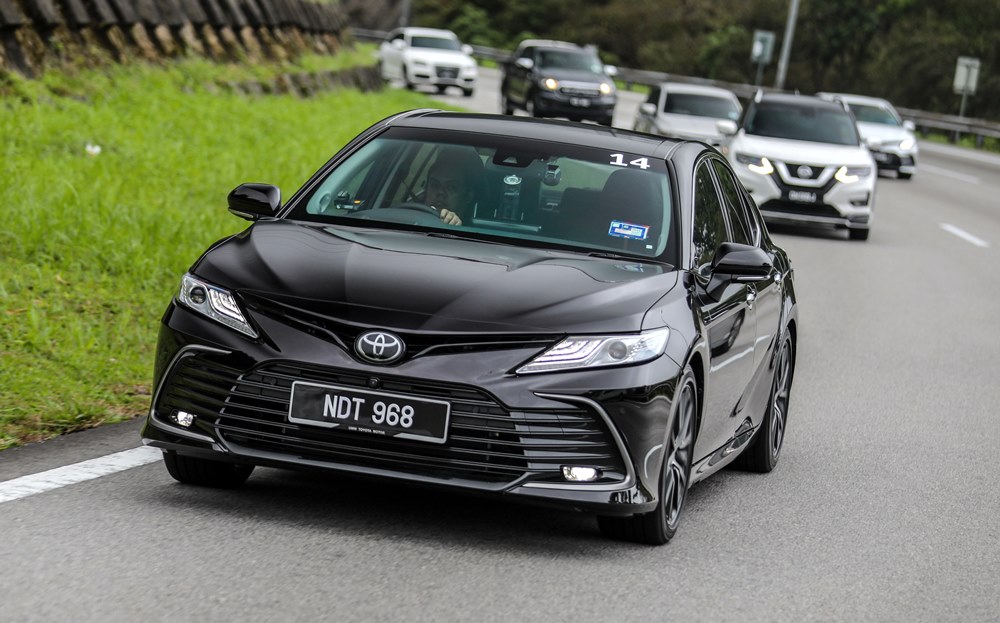 The previous 2.5-litre engine gave fairly decent performance and provided smooth propulsion from A to B. With the new powertrain, there is even less noise emanating from the front, and refinement has been raised a notch or two. Power delivery is very linear, a bit slow initially but becoming more muscular as the revs rise. Overtaking can be done confidently as the midrange torque is notably strong.

Toyota’s transmissions have always been smooth and the Direct Shift – 8AT has nearly imperceptible gearshifts. You can, at the press of a button, alter the character to be more sporty but unless pushed hard, you won’t feel a big difference. There are also paddle shifters but it is likely that the ‘intelligence’ of the transmission will make it less necessary to intervene with manual selection of gears.

TNGA is certainly an excellent piece of engineering work, allowing the car to have the comfort levels expected of an executive sedan as well without sacrificing dynamic handling. Thanks to the lower centre of gravity and responsive steering, the car is easy to maneuver, and its agility belies its size (and weight).

The space in the cabin deserves mention and whether you sit in front or behind, there’s generous space all round. We have Toyota USA to thank for this: had they not rejected the original design in 1990, we might still have a conservative narrow-bodied sedan which had been proposed. By insisting on something bigger to suit Americans in particular, we got a car that is today bordering on being a luxury model.

Just as nobody ever got fired for choosing IBM in the old days (because IBM computers were so good and so was their service support), you can’t really go wrong with a Camry… or any Toyota for that matter. The notion that Toyotas are boring cars is also an outdated one and with the new Dynamic Force powertrain, you can have an enjoyable spirited drive while the comfort levels will also please the people sitting behind. 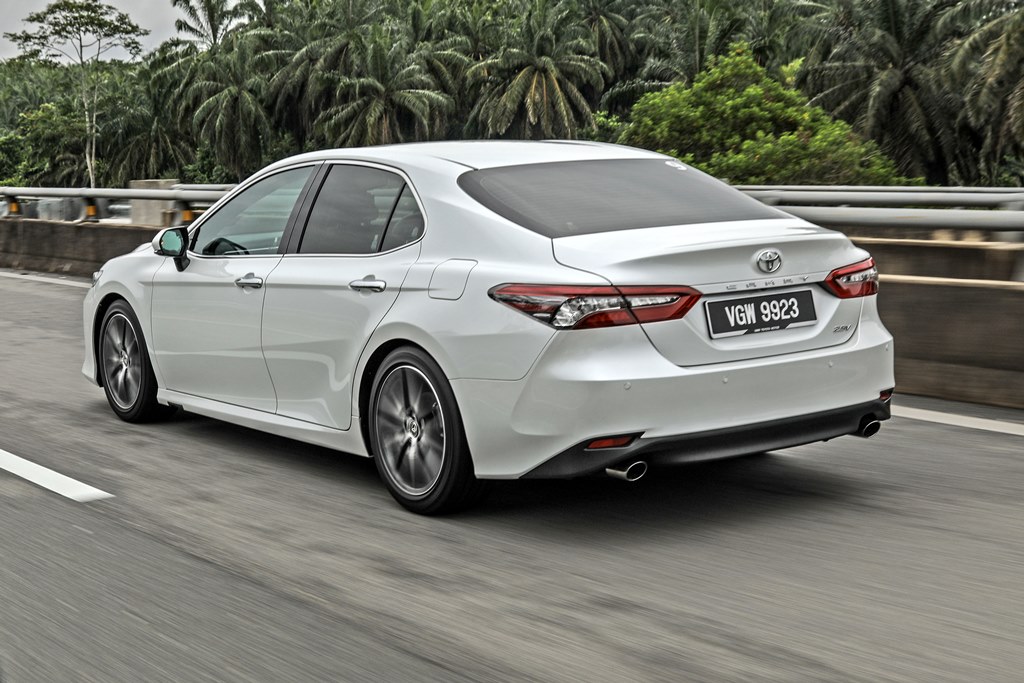 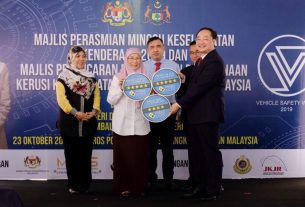 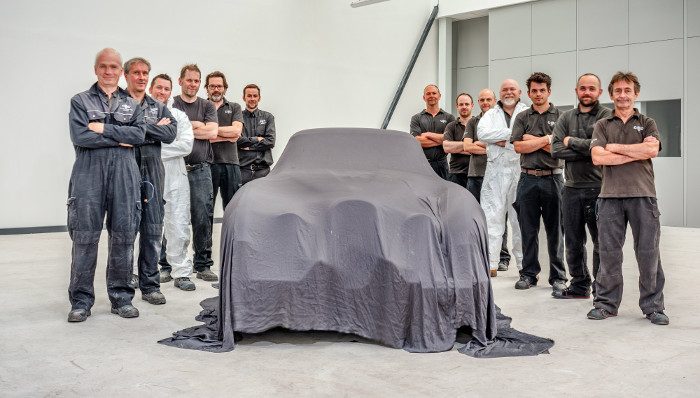 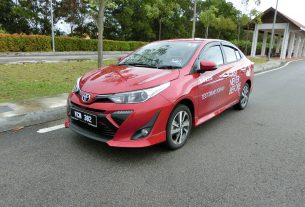