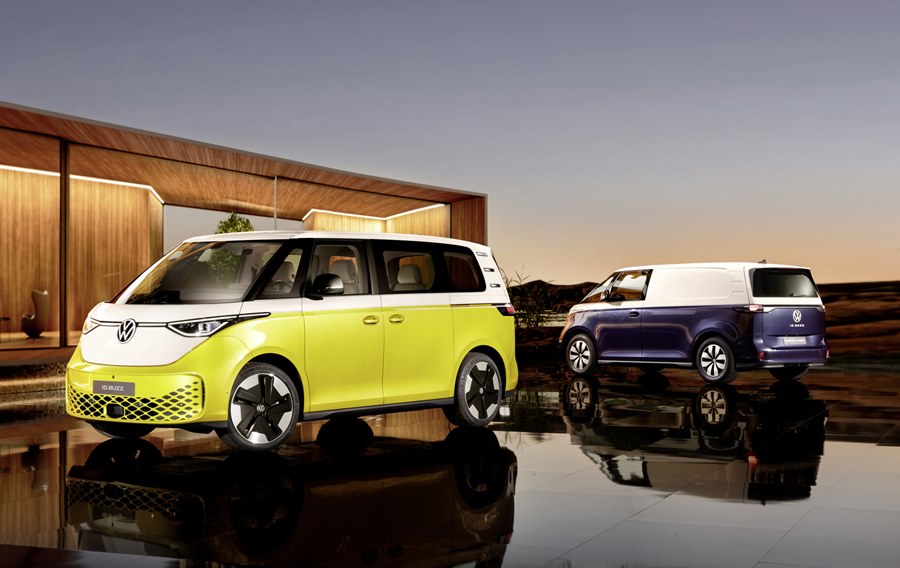 Thhe Beetle was Volkswagen’s first car and the company brought it back in a modern form in 1997. Now it is doing the same thing with the brand’s second model which was the Type 1 Transporter produced from 1949 onwards. It was actually on an extended Beetle platform and like the iconic car, remained in production for a long time. However, the Transporter, unlike the original Beetle, evolved in its design right to the current 6th generation.

With demand for MPVs in many countries, Volkswagen decided that one of the models in its all-electric ID. family would have to be such a vehicle, and for inspiration, the designers looked all the way back to the Type 2 which had various names in different markets (just like the Beetle). The original Transporter was especially popular in America and was one of the symbols of the 1960s counter-culture movement. 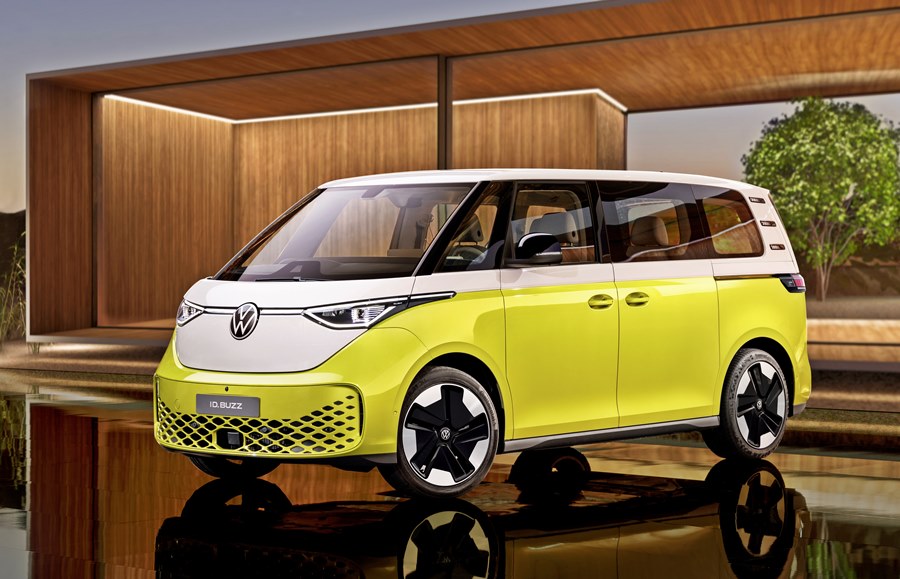 Its low cost and simplicity made it easily affordable by the hippies who would live in it and gave the vehicles a lot of character with creative paintwork. And with the same durability as a Beetle, it lasted a long time with minimal maintenance too.

In 2022, the Type 1 returns as the ID.Buzz and it is fully electric. Like other ID. models, the ID. Buzz  used the Volkswagen Group’s Modular Electric Drive Kit (MEB). This is the world’s first scalable mass production platform for fully-electric vehicles that can be configured for different models and segments. Its architecture allows for an evolutionary further development of software and technology, which not only benefits new models such as the ID. Buzz, but also models that have already been delivered, by means of over-the-air updates.

The unique design of the ID. Buzz has proportions that create a direct link with the original classic vehicle. Another feature that has always been typical of the model line is the iconic front with its V-shaped front panel, now flanked by charismatic LED headlights. The same goes for the optional 2- paintwork. 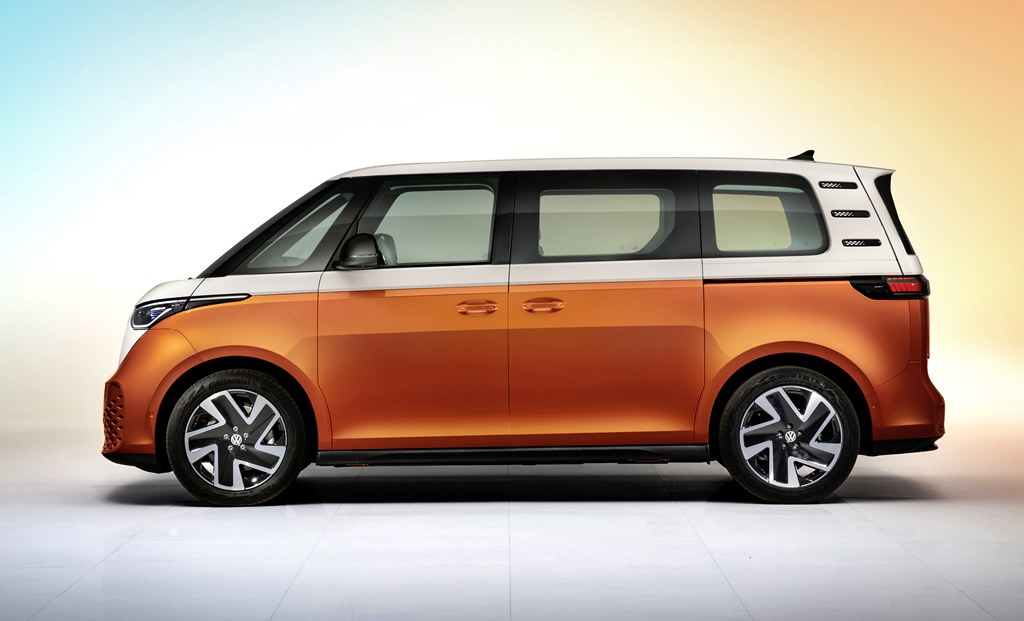 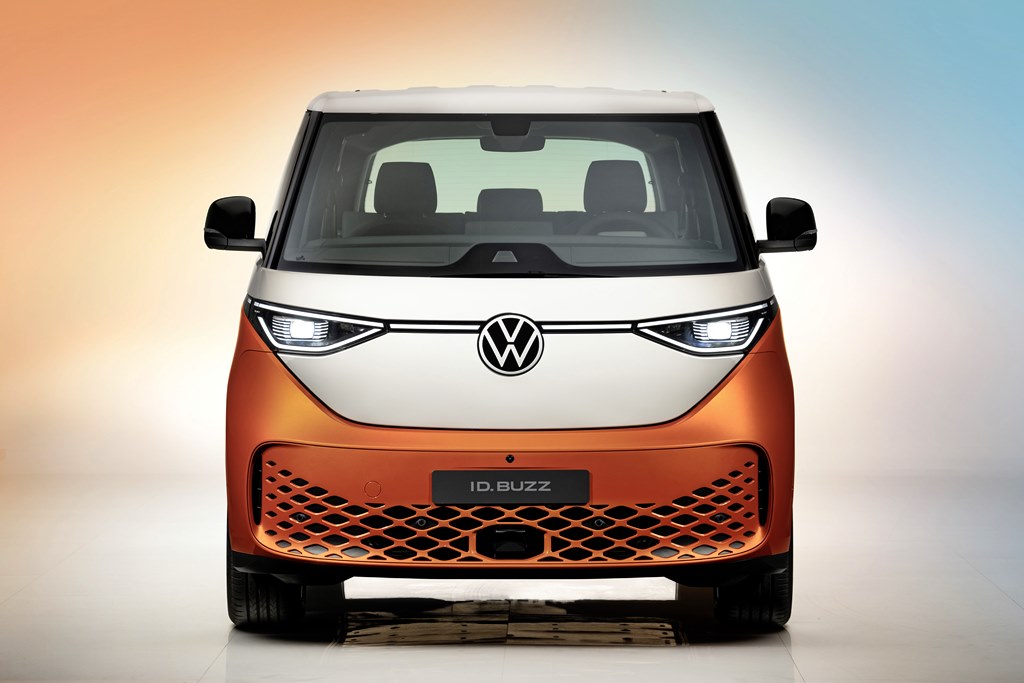 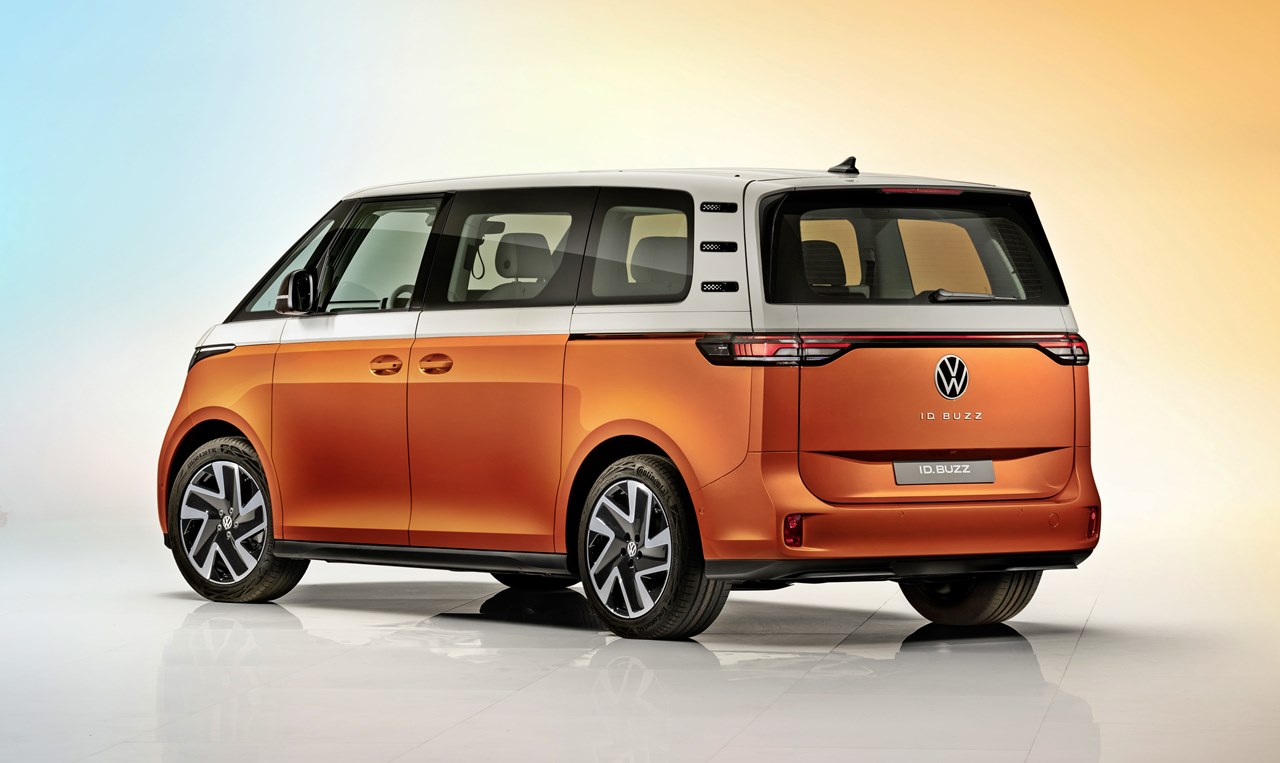 The ID. Buzz and commercially-oriented ID. Buzz Cargo have a long wheelbase of 2988 mm, roughly the same as that of the current 6th generation Transporter. The length of both versions is 4712 mm which means that, in relation to the overall length, the wheelbase is unusually long. This has allowed for more flexible packaging within, complementing the cubic shape which is ideal for maximising available space.

Function should get a priority over design and in the case of the ID.Buzz, it’s the first MPV that has a drag coefficient comparable to a car’s – 0.285 to 0.29 (ID.Buzz Cargo). Good aerodynamics are important, especially for an electric vehicle so that the motor can work less hard to maintain a desired speed. Of course, it’s the same with cars with combustion engines too as less wind resistance means less energy consumed and more fuel saved. 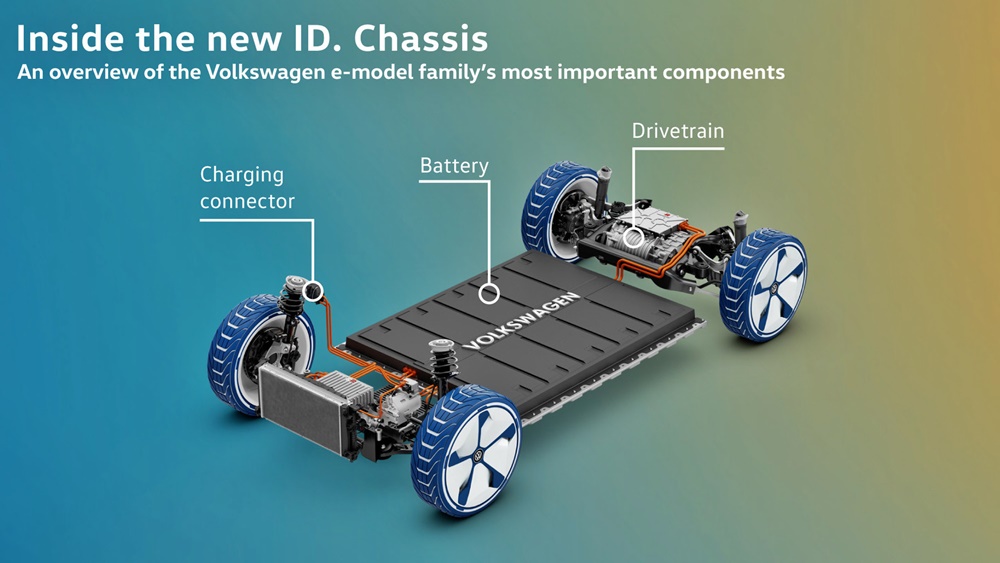 And talking of energy, the ID. Buzz and ID. Buzz Cargo will have a 77 kWh lithium-ion battery pack to power a 150 kW electric motor, which – as the flat engine once did in the Type 2 – drives the rear axle. The position of the battery, integrated deep down in the sandwich floor, and the lightweight electric drive system result in a good distribution of weight and a low vehicle centre of gravity. Both factors optimise the handling and agility.

The battery pack can be charged from wallboxes or public charging stations using 11 kW alternating current (AC). Via a CCS plug connector at a DC rapid-charging station (direct current), the charging power can be as much as 170 kW. When charged in this way, the battery charge level rises from 5%  to 80% in about 30 minutes. 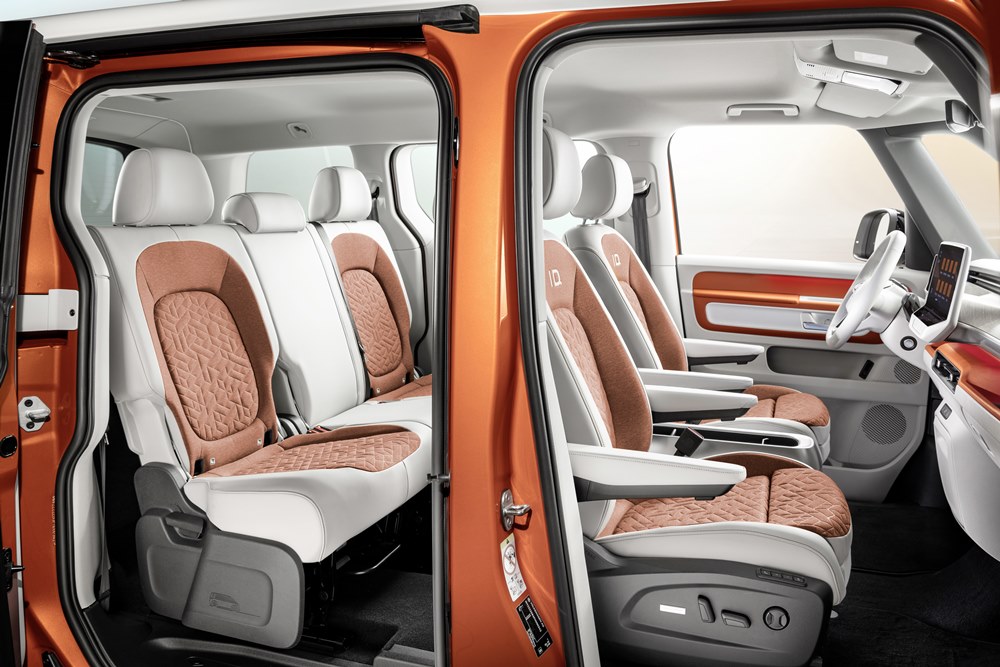 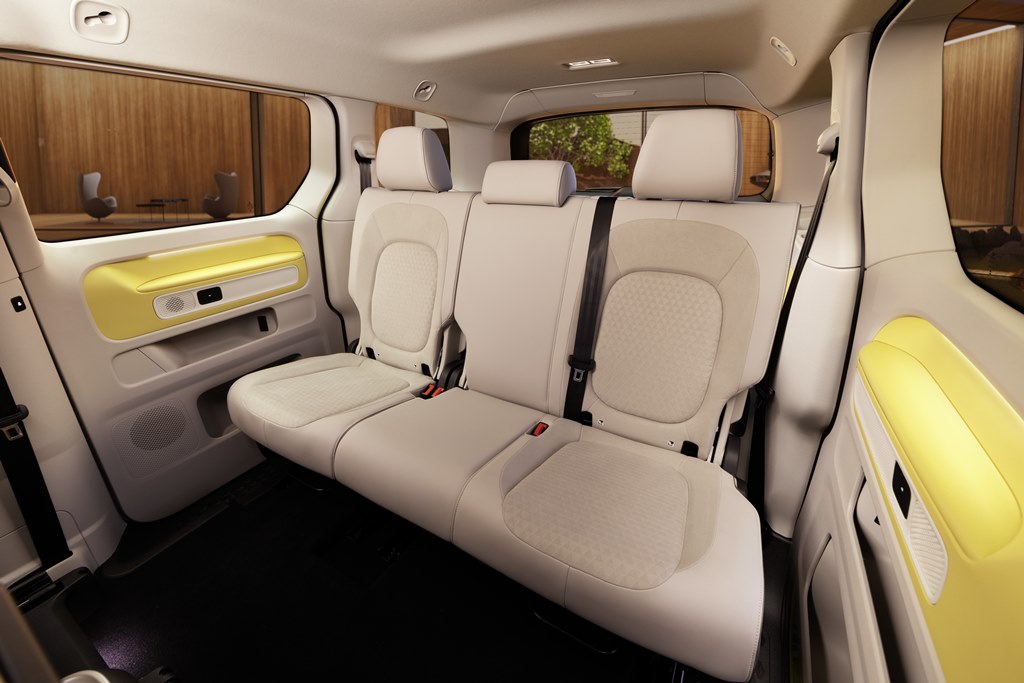 For the ID.Buzz, the interior has been given a lounge-like, friendly ambience for 5 people to enjoy travelling. The  spacious cabin maximizes utility and comfort, while dazzling with high-tech features and an interplay of colours and materials. 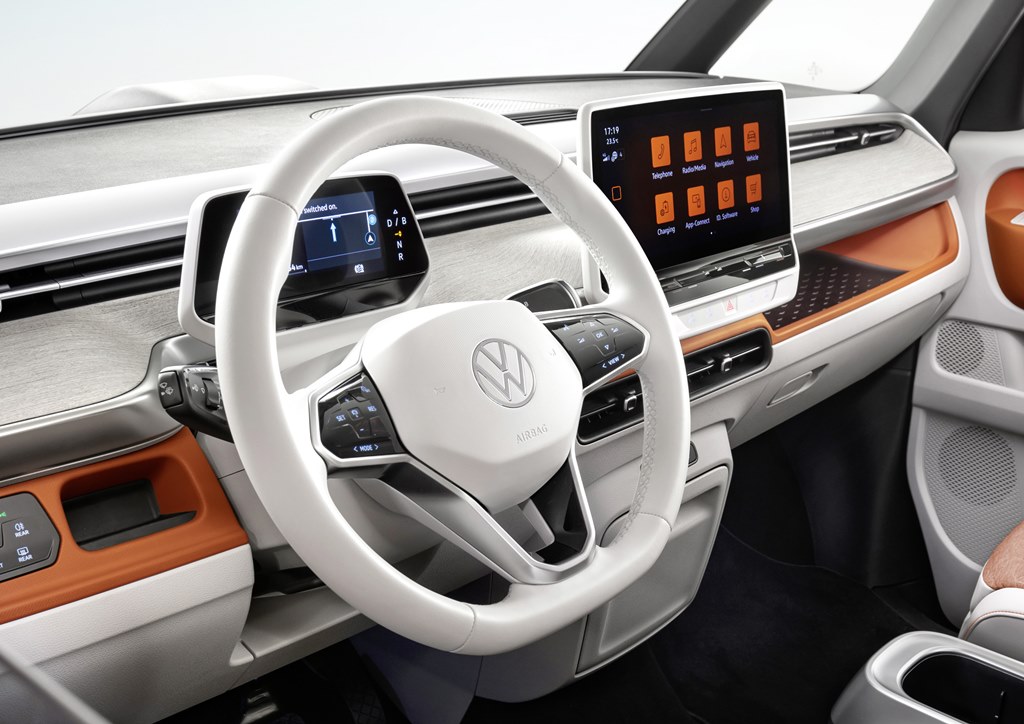 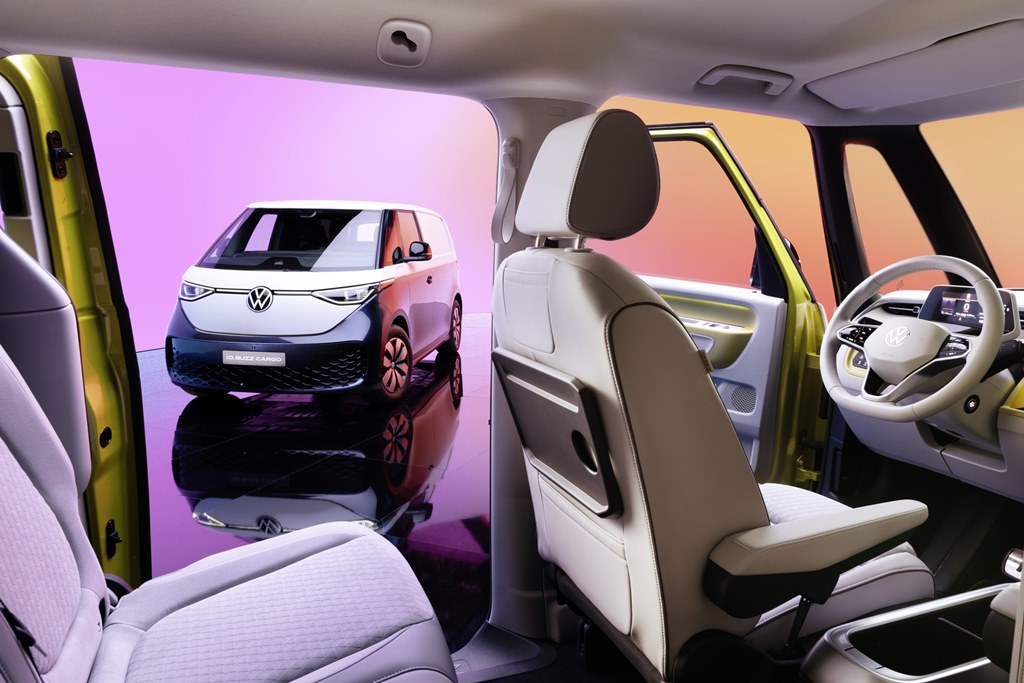 A love for detail is reflected in the stylized vehicle silhouette that is embossed in the lower side seat trim, and the fold-down tables located in the backs of the front seats. Wholly practical, by contrast, is the optional height-adjustable cargo floor, which creates a level load space surface. The upward-opening rear hatch reveals 1,121 litres of luggage space and 2 side sliding doors are fitted as standard.

Volkswagen Commercial Vehicles has developed an optional movable and removable centre console specifically for the ID. Buzz. The idea for this multifunction box was derived from the concept car shown earlier. In its upper section, it provides storage bins (in the case of the ID. Buzz Cargo, a cupholder), that can accommodate bottle, tablets or laptops.

As with other models of ID. family, the ID. Buzz comes with the interactive ‘ID. Light’. It stretches across in front of the windscreen in the driver’s field of vision above the instrument panel, and gives the driver intuitive information based on the colour and position of the light signal. For example, a signal in the right-hand area of the strip advises of obstructions in this area or corresponds with a navigation instruction to change lanes. When the ‘ID. Light’ goes red, it is signaling danger and the need to brake. 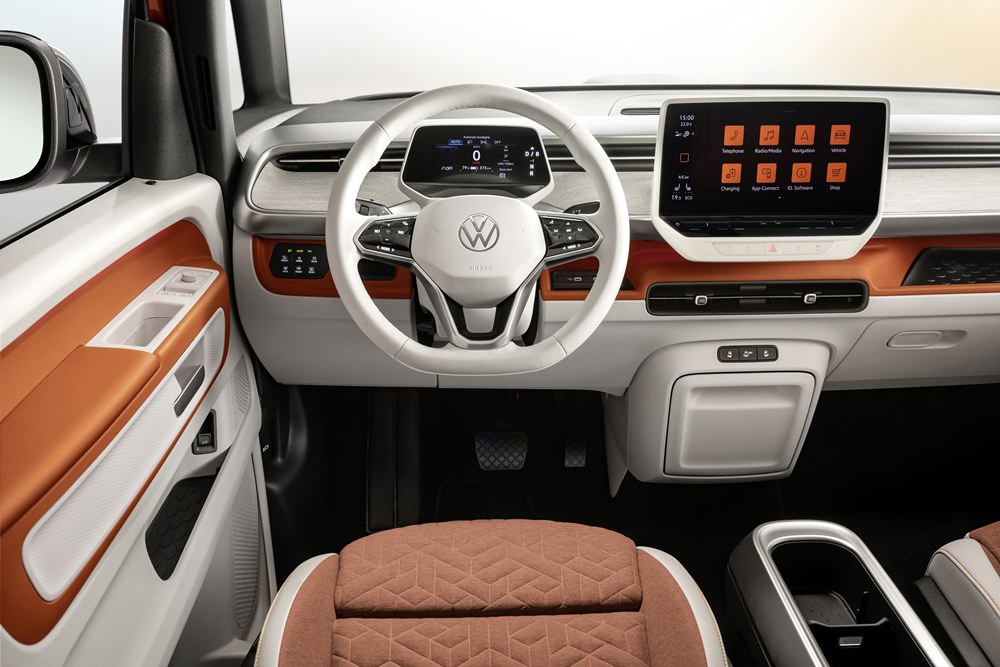 The hippies of the 1960s would love the ambient lighting feature – as standard, there are 10 colours and customers can also specify the 30-colour option. This option lights up a strip in the instrument panel, the decorative strips in the doors, the storage bins in the doors and the footwell. The Digital Cockpit and the infotainment system also take on the chosen base shade. In addition, two colours can be combined in each case for the different zones, and a ‘Mood Menu’ activates preconfigured lighting profiles.

Depending on the specifications chosen by importers in different markets, there is the possibility of a 6-seat configuration, with individual seats arranged in 3 rows of two. On the extended wheelbase version, there can be a 7-seat configuration in a 2/3/2 arrangement. 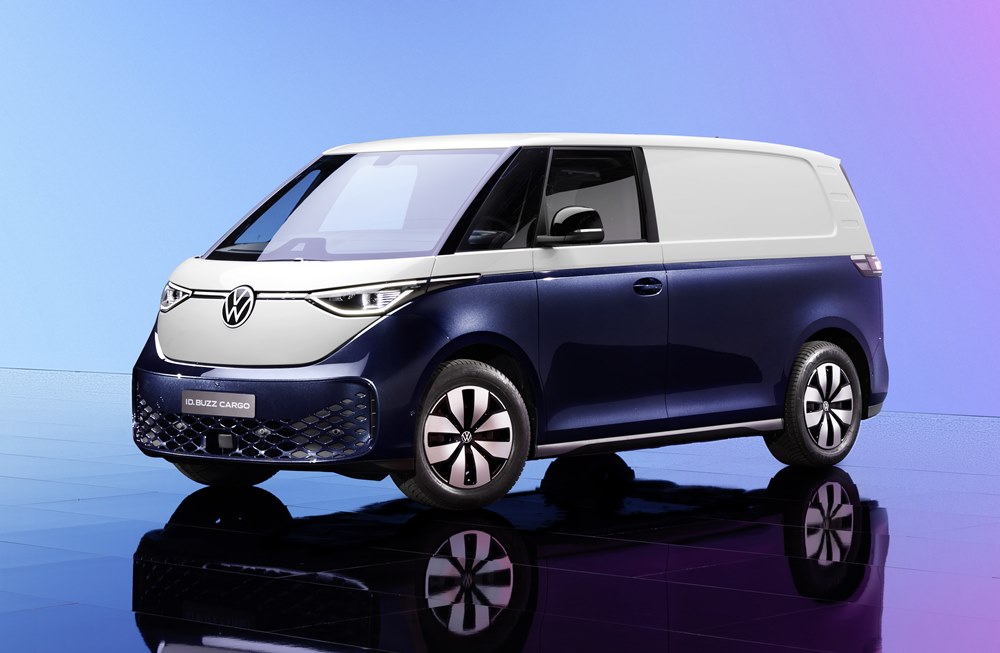 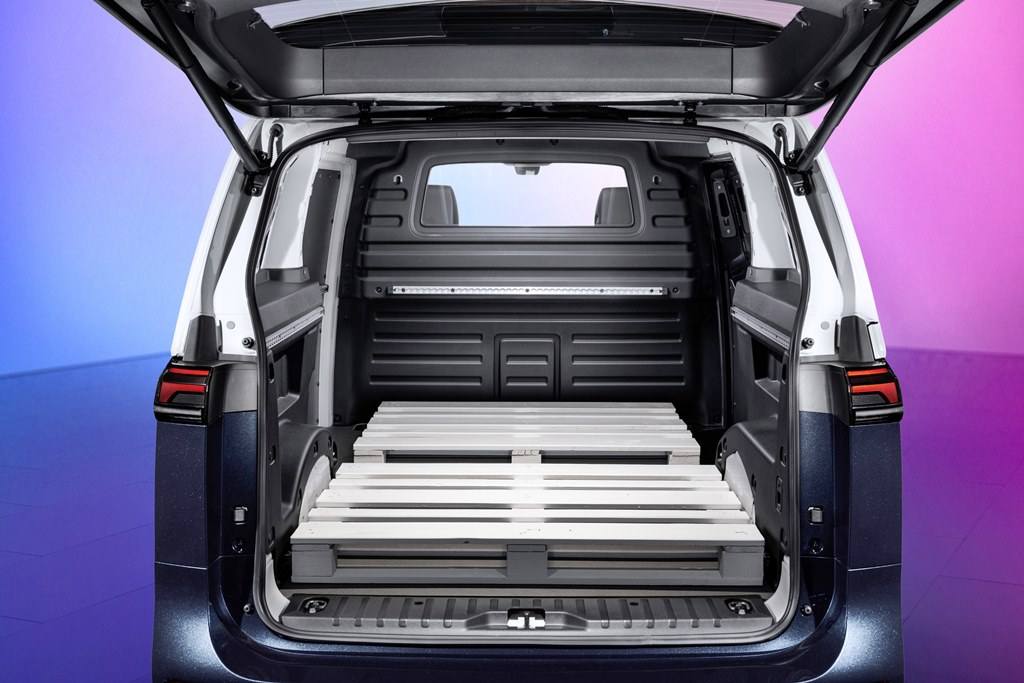 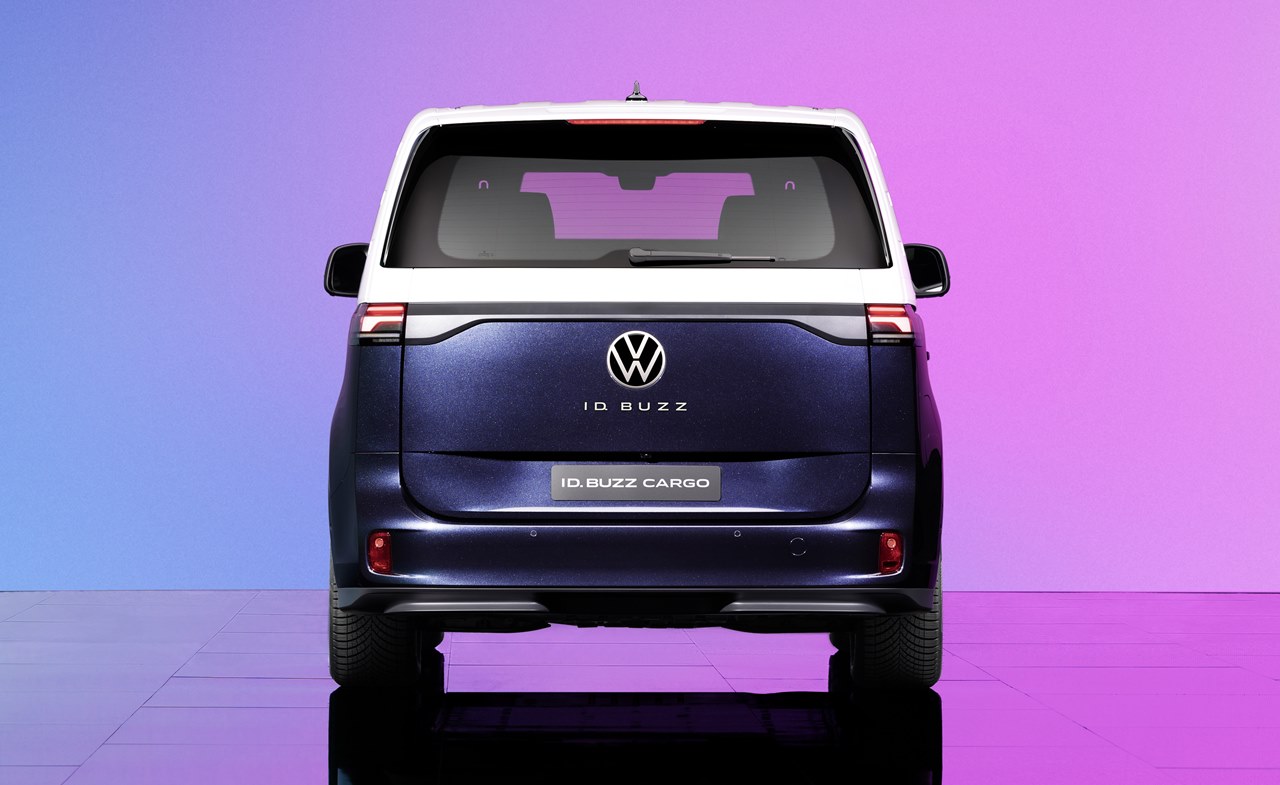 The ID. Buzz Cargo is what in Malaysia would be referred to as a ‘panel van’, strictly for commercial registration and use. In standard form, this version can accommodate 3 persons in front on a bench seat. An individual seat can also be installed for another passenger.

Behind the seats is a fixed partition, separating off the cargo space which has no windows. The cargo space has a volume of 3.9 cubic metres and has rings on the floor and bars on the walls for securing goods. Besides a wide-opening tailgate, the is one sliding door on the passenger side and customers can also specify a second sliding door on the other side as an option.

The ID.Buzz will go on sale in the third quarter of this year in some European markets. North America will see the extended wheelbase version in 2023 and deliveries will start in 2024. As for the rest of the world, Volkswagen Commercial Vehicles has not indicated when exports will start.