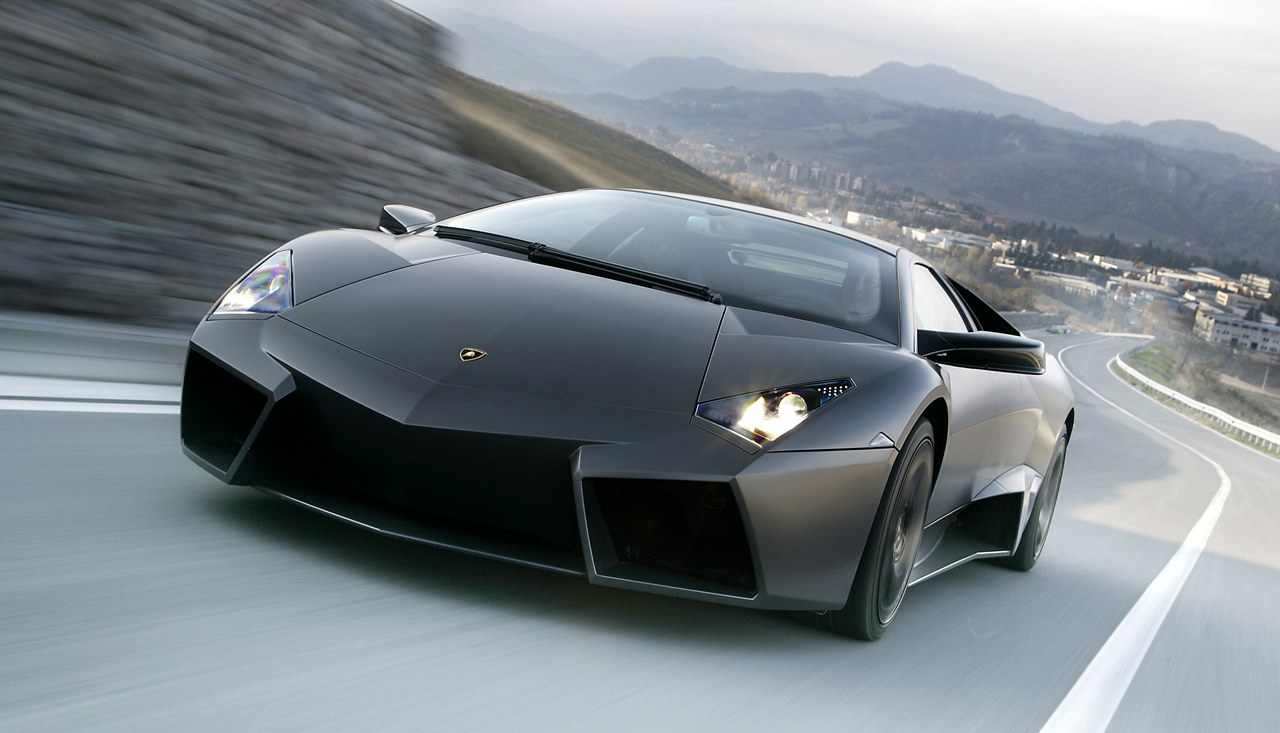 For decades, car designers have been inspired by fighter jets, with American designers being so infatuated with the tailfins and jet engines that they put them on cars of the 1950s. In the decades that followed and even up till today, the inspiration from flying machines remains and it’s not only with the exotic and sleek supercars. This was evident when, back in 2005, a young Proton designer said that the Savvy’s design also had some inspiration from the F-117 Nighthawk stealth fighter.

At Lamborghini, the designers would of course have been much influenced by jet fighters and the highly aerodynamic shapes make this obvious. The Reventon, which was unveiled 15 years ago, was a clear example of such influence and Lamborghini even mentioned the aircraft that was the source of inspiration: the McDonnell Douglas F-15 Eagle. Many also saw elements of the F-117 with the sharp and angular form, especially with the dark finish. 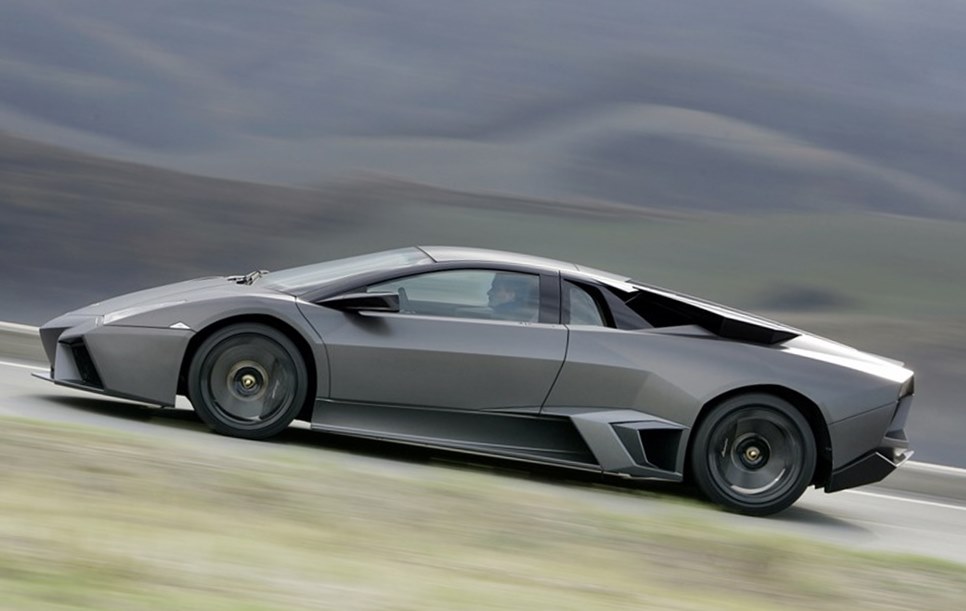 20 units for sale
The Reventon, displayed at the 2007 Frankfurt Motor Show, appeared like a one-off concept with an extreme design but it was to be an exclusive model built for sale to 20 customers. The ex-factory price then was quoted as 1 million euros, which made it the most expensive Lamborghini up till that time.

The supercar was based on the Murcielago LP640 and had similar proportions as the Gallardo as well. It was not so obvious then but much of the design language used for the car would later appear in the Aventador as well.

“The Reventon is the most extreme of all, a true automotive superlative. Our designers at the Lamborghini Style Centre took the technical base of the Murcielago LP640 and compressed and intensified its DNA, its genetic code,” said Stephan Winkelmann, President & CEO of Lamborghini then (and still in the same position today). 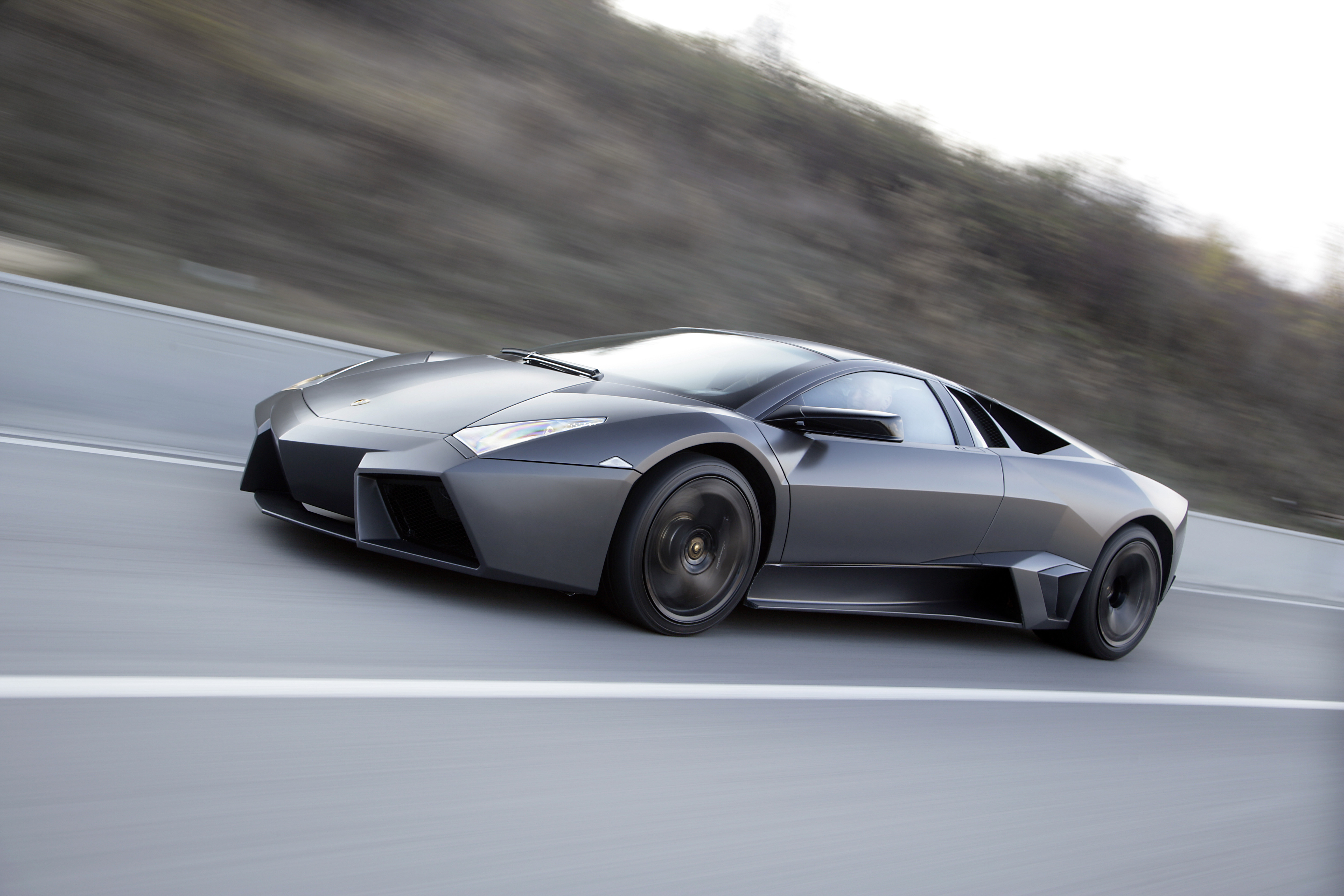 Lamborghini’s naming tradition
Keeping to Lamborghini tradition, the name was that of a fighting bull, owned by the Don Rodriguez family. It is included in the list of the most famous bulls ever and is known for killing the famed bullfighter Felix Guzman in 1943.

Like today’s Lamborghini models, the edges of the body are sharp, with precise lines and clean surfaces – these are ingredients of a style reduced to the essential. Each element is created exactly according to its function; ornaments and decorations are totally foreign to a Lamborghini.

With the Reventon, the Centro Stile designers developed this philosophy with an extremely precise, technically striking style that mimicked the fastest fighter jets. The bodyshell was made of a composite carbonfibre material (CFC) and steel, with the exterior components glued and fixed on. 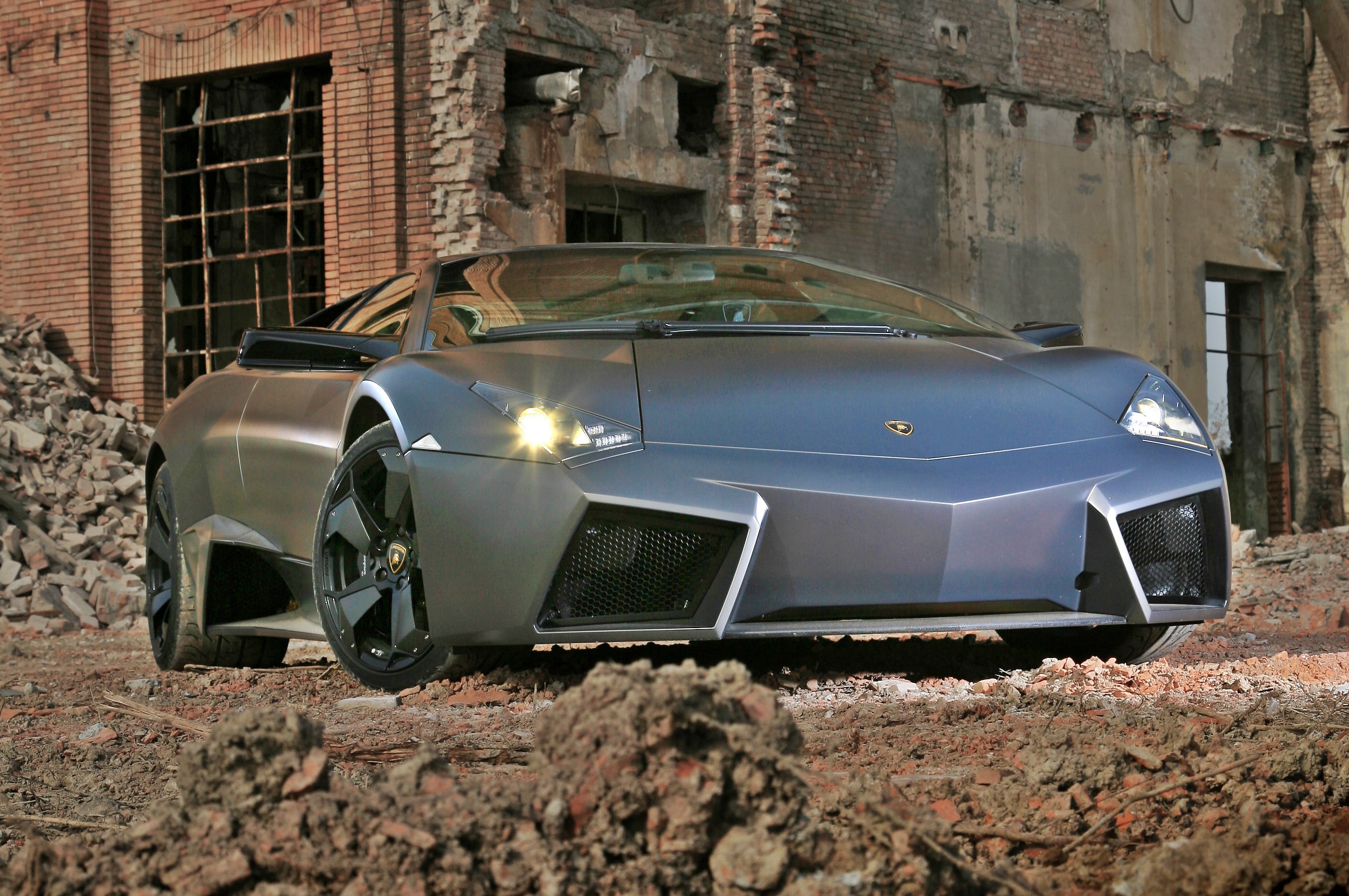 The front was characterized by the acute angle of the central ‘arrow’ and by the powerful forward-facing air intakes. Although they did not supply air directly to the turbine like an airplane, an abundant volume of air was still necessary to cool the carbon brake disks and the 6-cylinder calipers. 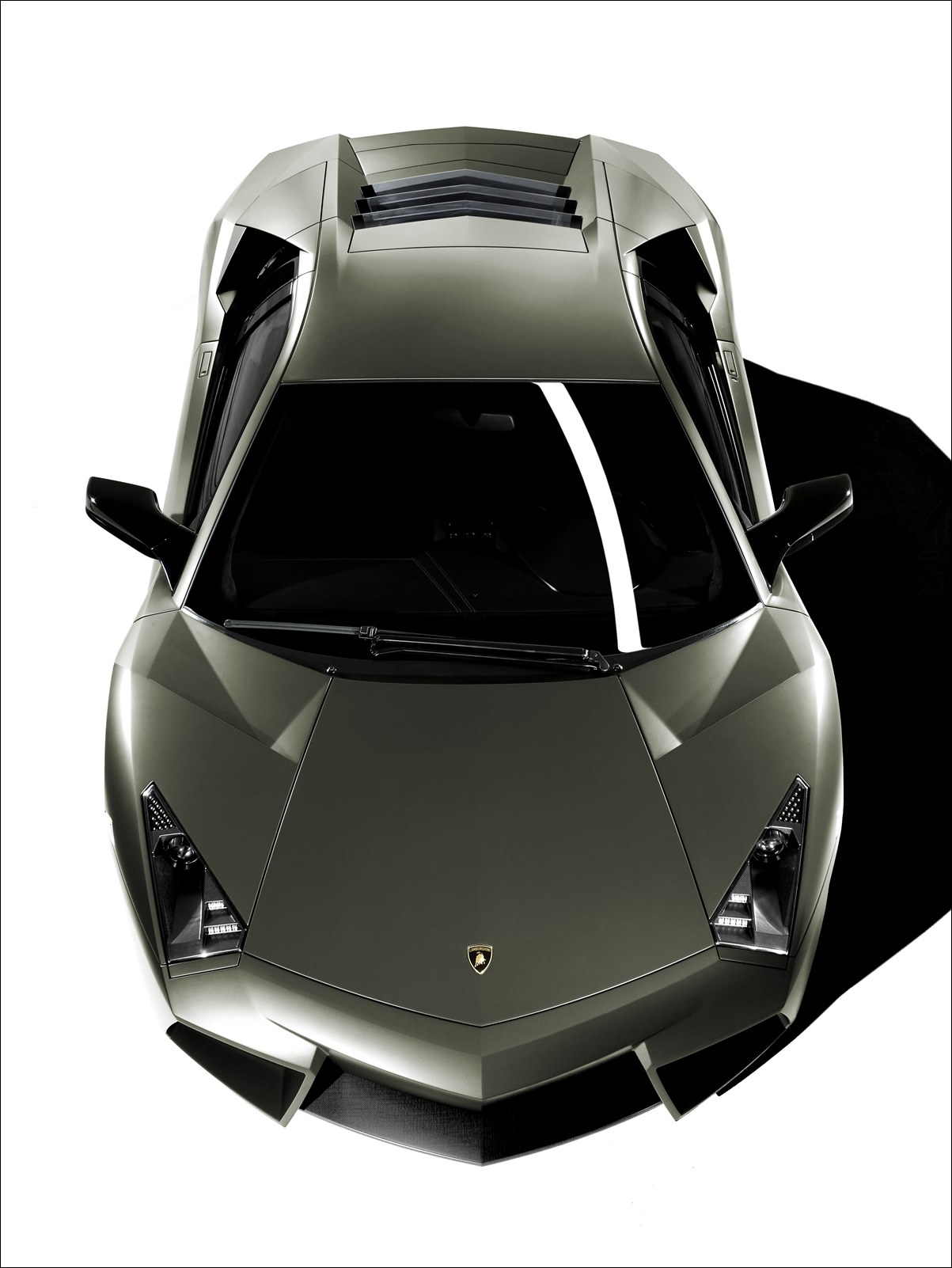 From the time of the legendary Countach, Lamborghini’s V12 models have had ‘scissors doors’ which open upwards. With their asymmetric configuration on the Reventon, the large air intakes below the doors provided an example of the extreme coherence with which a Lamborghini fulfils its function. On the driver’s side, it was large to increase the flow of oil to the radiator. On the passenger’s side, the air intake was flat because, in this case, it only had to ensure the flow below the floor.

The aerodynamically optimised flat floor structure terminated at the rear with a diffuser featuring an accentuated shape. This guaranteed superior road grip and stability even at the 340 km/h the car was capable of. Because of such a high speed, aerodynamics had to be optimized.  The airflow and the section of the variable geometry air intakes of the engine and the rear spoiler (adjustable) were specially shaped and designed after lengthy wind tunnel studies. 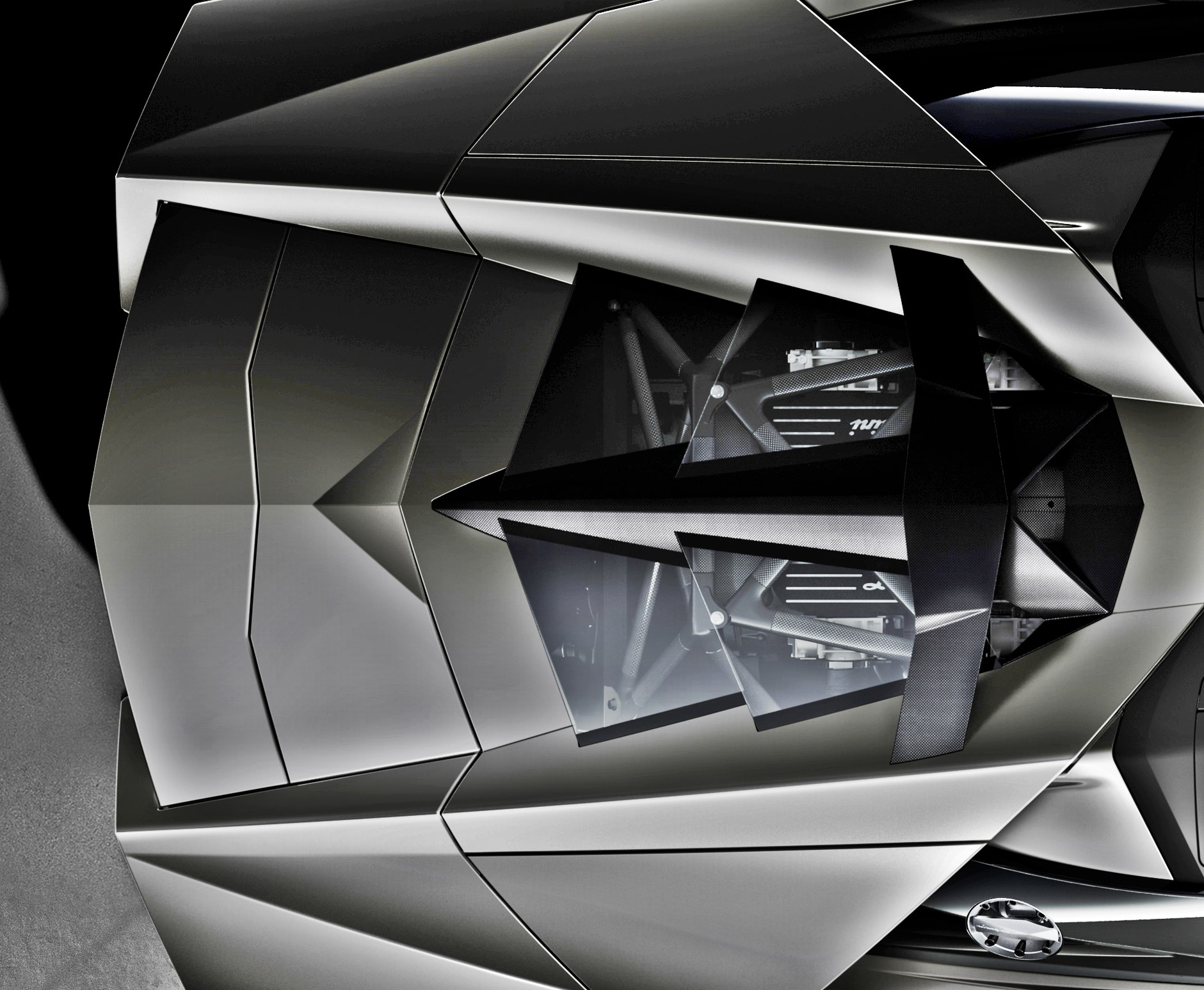 The engine was the classic 12-cylinder unit with a 6.5-litre displacement and tuned to produce 650 bhp/660 Nm. For super-fast and precise shifting, there was a robotised e.gear system with a permanent Viscous Traction 4-wheel drive system to get all that power to the road.

The engine cover was made of glass laminate with open ventilation slits that offered a glimpse of the 12 cylinders within. The glass also featured the marked arrow angle that characterized the design from the front to the rear spoiler.

The Lamborghini designers’ love for detail was illustrated by the fuel tank lid: a small mechanical work of art, achieved by milling a solid aluminium block. The combination lights transformed the incisiveness of the design into light, with the front having LEDs alongside Bi-Xenon headlights. Seven LEDs served as Daytime Running Lights while another nine diodes were used for the indicator and hazard lights. Because of the high temperature in the rear lower section of the car, special heatproof LEDs were used for the indicator and hazard lights, brake lights and rear lights with a triple arrow optical effect.

Aircraft display for driver
The cockpit of the Reventon certainly had a lot of aircraft inspiration, with the instrument panel housing three TFT liquid crystal displays. The instruments were housed in a structure milled from a solid aluminium block, protected by a carbonfibre casing. At the touch of a button, the driver could choose from two vehicle information display modes. Today, with fully graphic and digital displays, a driver can customize the instrumentation even more. 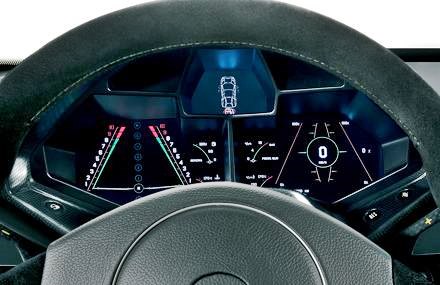 An interesting feature was the g-force meter, something which was novel then but would later appear in some high-performance models. This display showed the dynamic drive forces, longitudinal acceleration during acceleration and braking, as well as transversal acceleration around bends. The forces were represented by the movement of an indicator on a graduated 3D grid depending on the direction and intensity of the acceleration. A similar instrument can be found in aircraft and Formula

It took less than a year for the Reventon project to progress from the first ideas to the finished car. Centro Stile, which was just a few years old then, was able to carry out the entire design process at Lamborghini for the first time without any external collaboration with design studios like Bertone.

The Reventon Roadster
Two years after unveiling the Reventon coupe, Lamborghini showed a roadster version at the 2009 Frankfurt Motor Show. It had a slightly more powerful engine but the top speed was 10 km/h less. Lamborghini offered it for 1.1 million euros but never revealed just how many were sold, although it said that there would be less than 20 units.

The original Reventon production was done between 2007 and 2009 and besides the 20 units that were sold, one more unit was built and is displayed at the Lamborghini Museum of Technologies. Half of the cars made are known to have gone to the USA and the rest went to other countries. The Reventon was one of the first ‘few-offs’ from the brand and remains as one its most iconic models too. 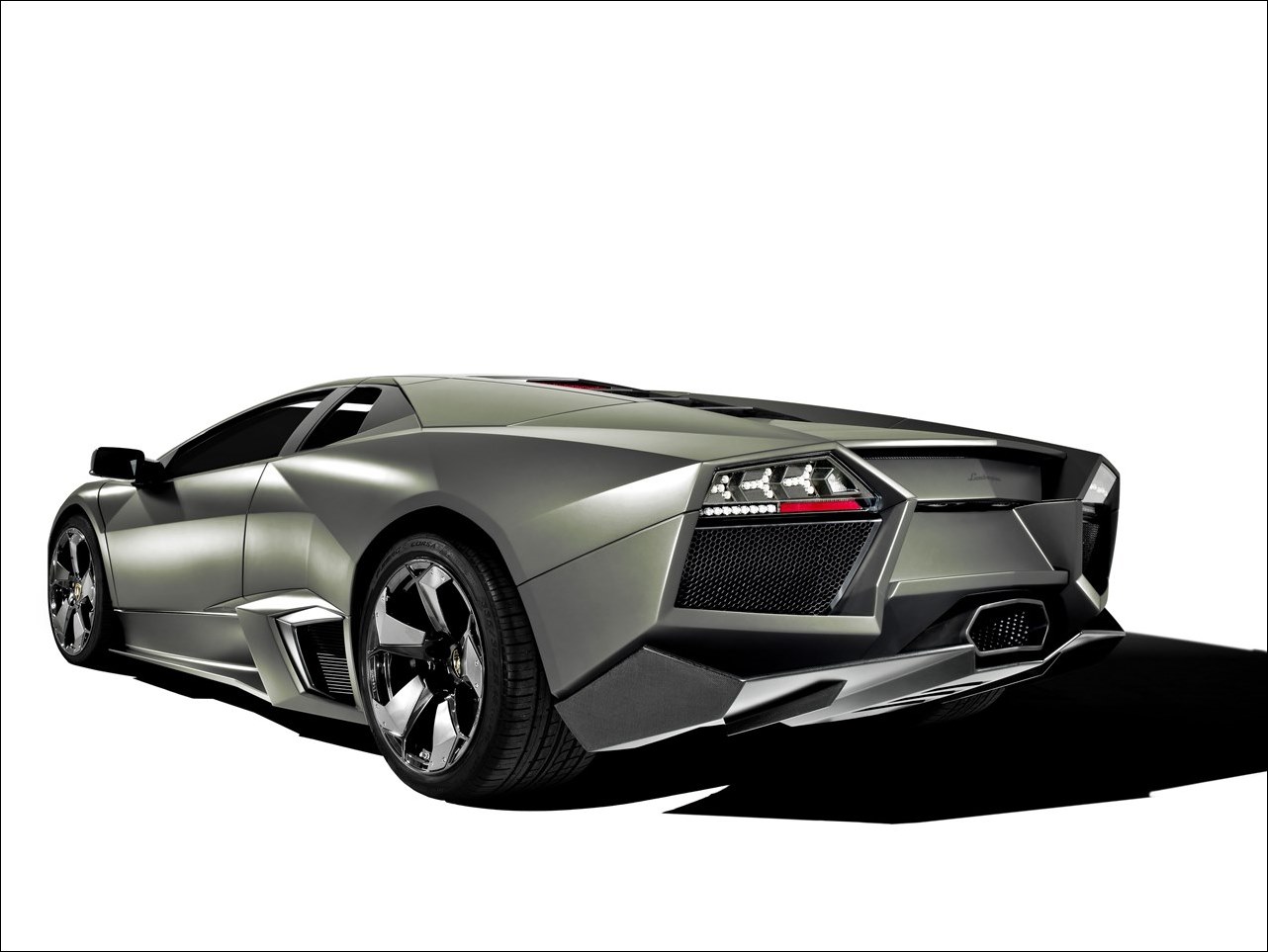 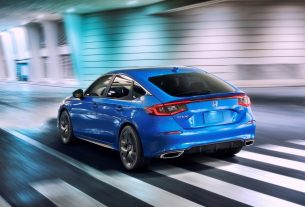 VW to build direct descendant of the original Bus 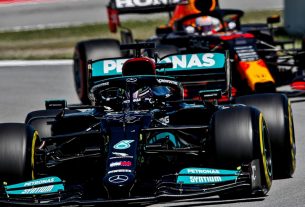