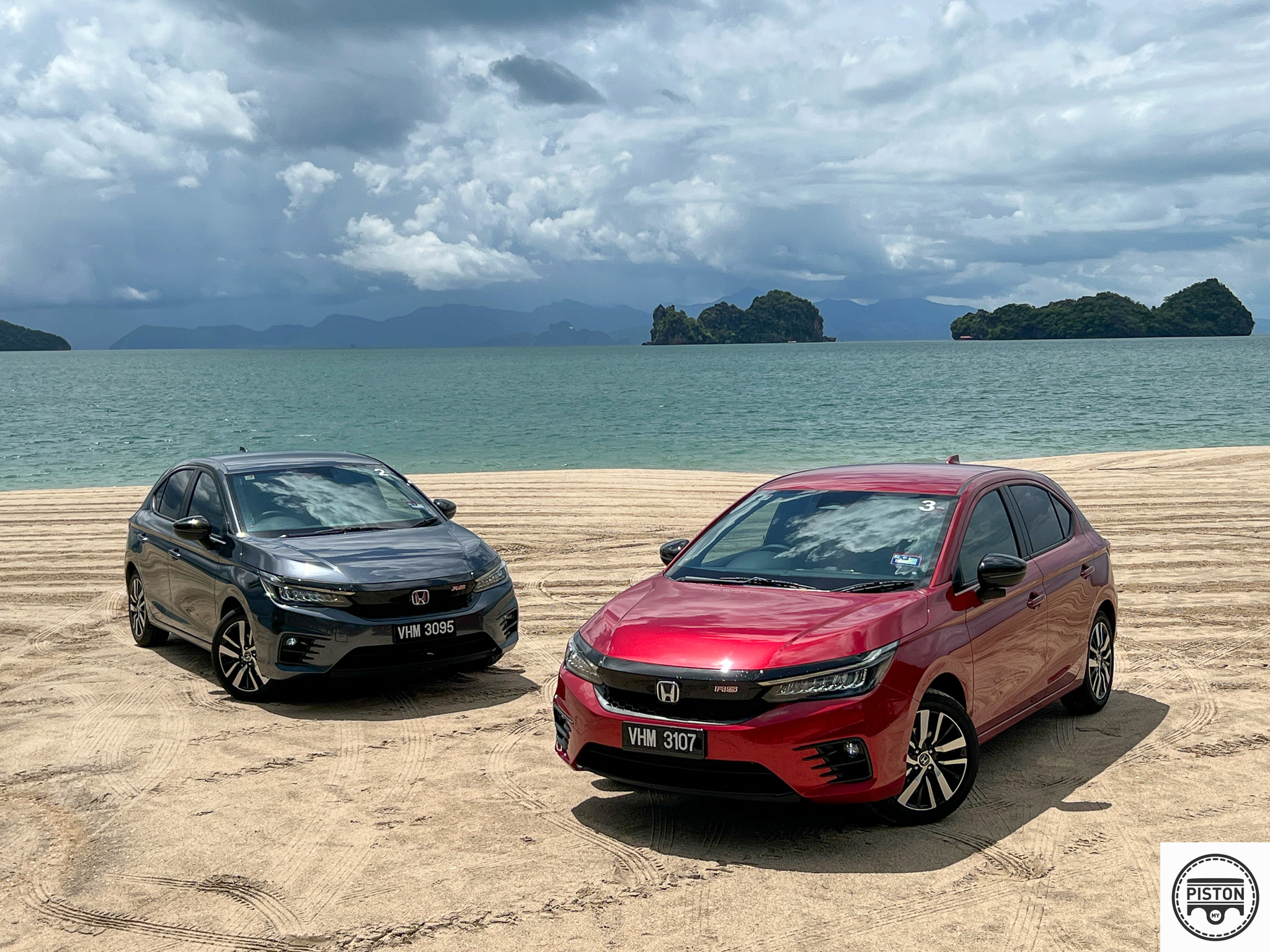 When Honda Malaysia first announced the pricing of the top of the line Honda City RS, many thought that the company had lost the plot.

The Honda City is a loved car in Malaysia. Many swear by it for its practicality and simplicity. It’s a fuss-free car that offers a good ownership experience.

The latest generation City though takes it all a notch up and includes spaciousness and impressive build quality into the mix. 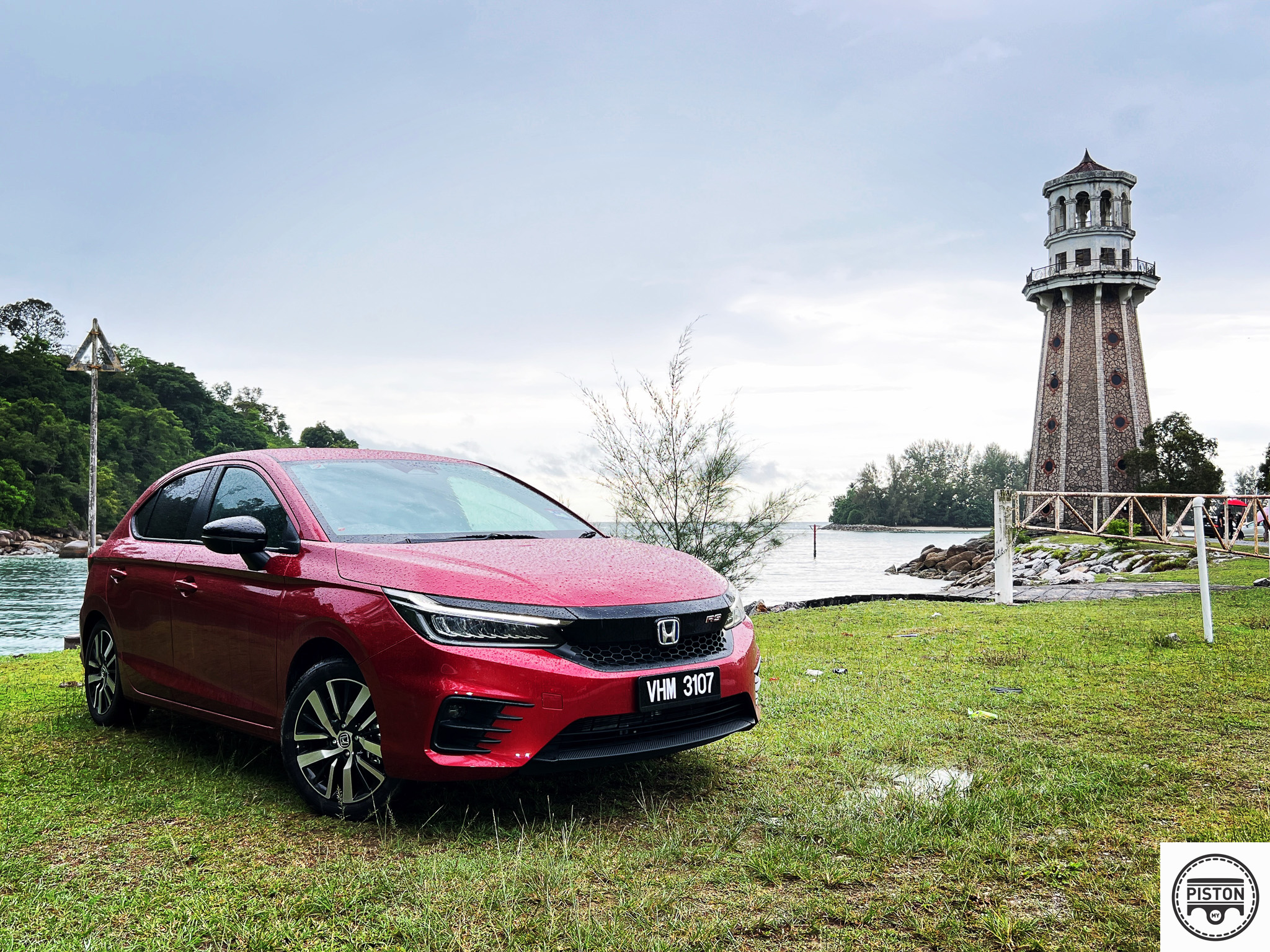 The RS model is the top of the line model and features an impressive powertrain designed for fuel economy and power offered in a handsome package that also features space and quality that can rival some European marques.

Many were floored when Honda Malaysia first announced the price.

The Honda City has always been the cheap sedan that you bought if you wanted a reliable means of transport for you and your family. And you can still get that with the “lesser variant” such as the S-Spec that only costs a little under RM76,000. 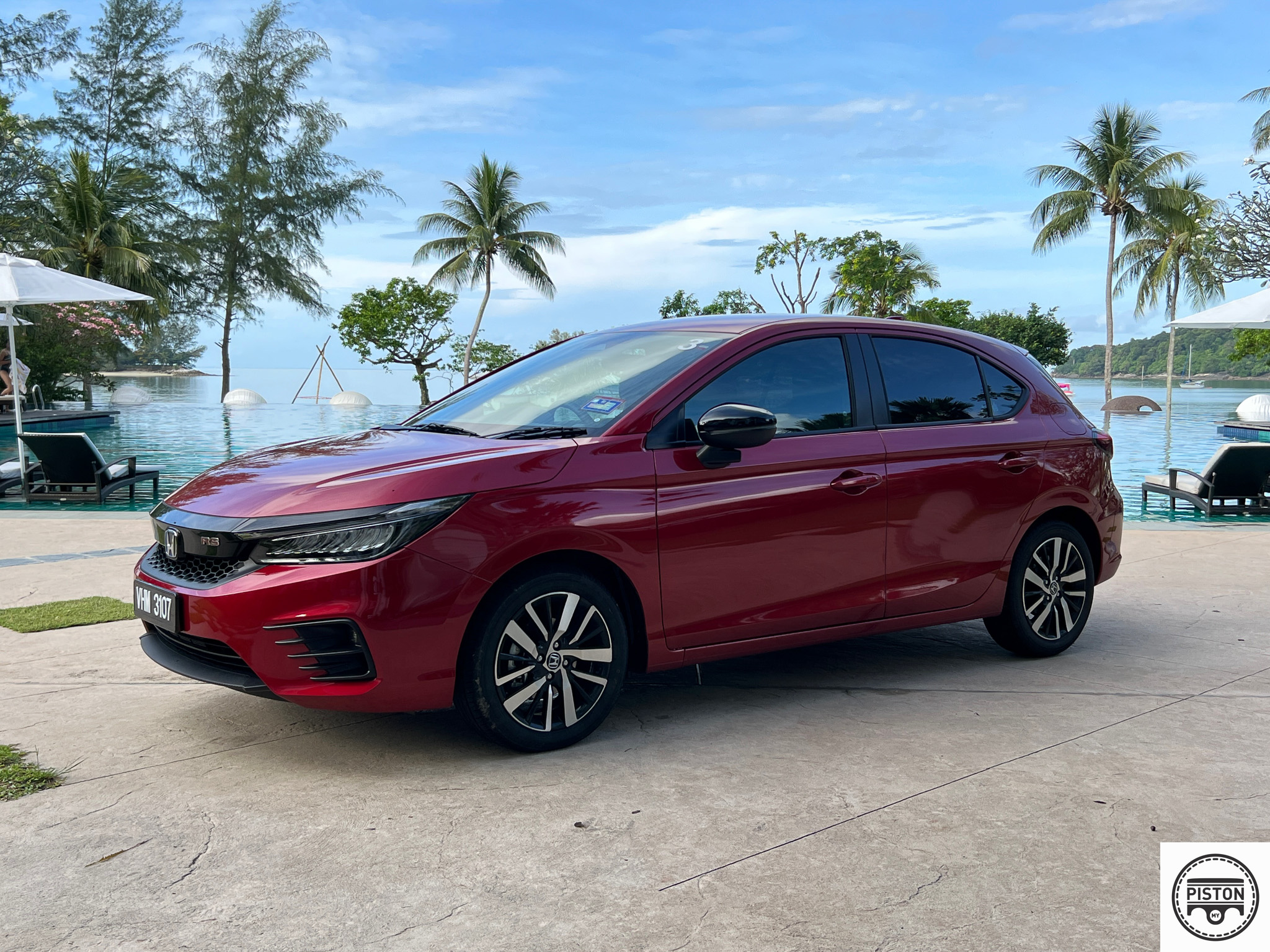 But that’s also what some would call “taxi-spec”, referring to a model that only offers the bare minimum.

The RS is the model you truly want if you are the type that appreciates all the bells and whistles and the cattle they hang from.

Lets get metaphorical and imagine this – instead of the mass produced two millimetre thick patty that we usually get in a ramly burger, imagine that same burger but with a wagyu beef patty cooked in virgin olive oil with blue cheese and premium organic vegetables and condiments placed in between soft bread sprinkled with sesame and chia seeds. 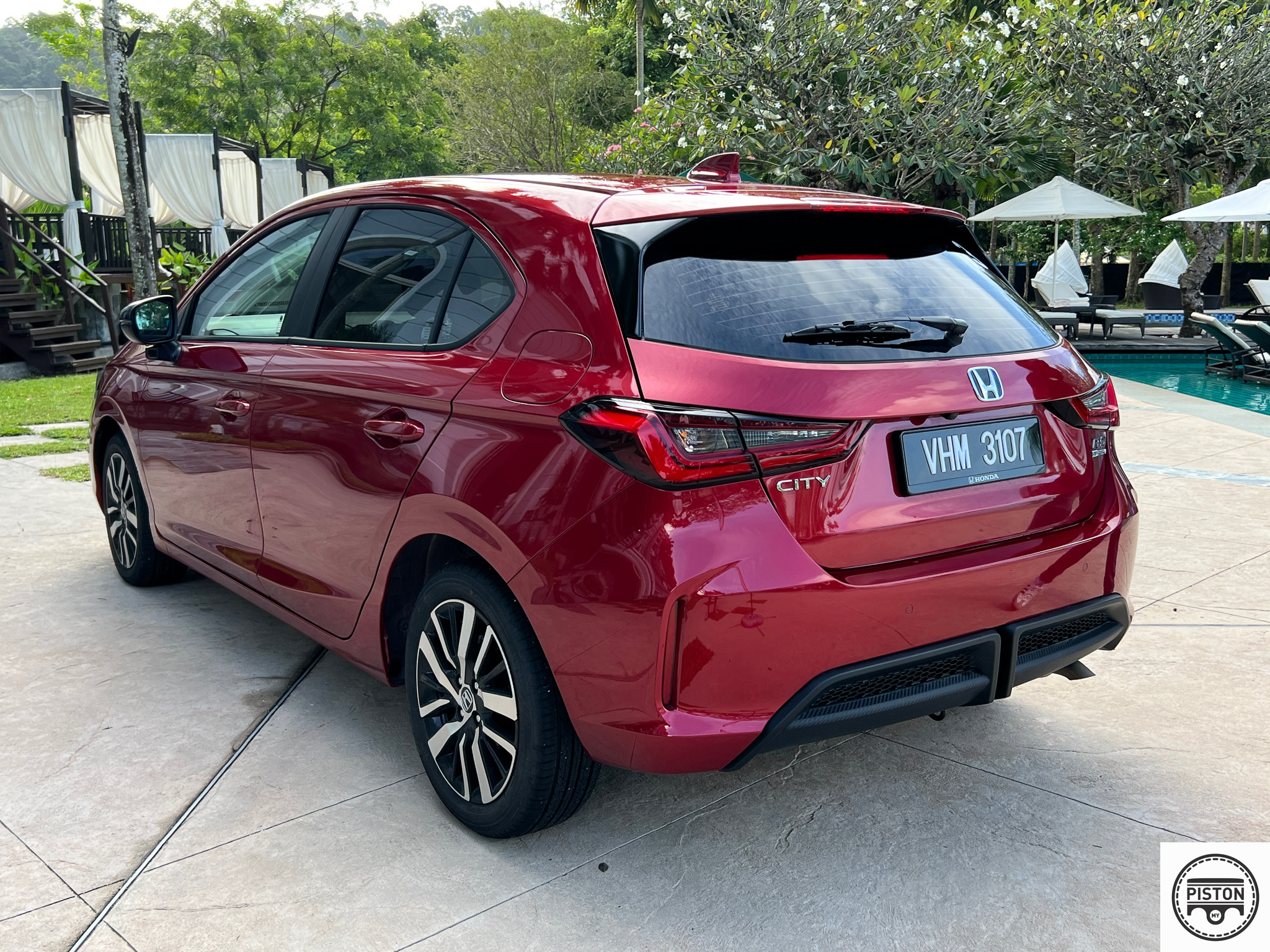 And instead of being served in a sloppy piece of wrapping paper, you get it properly wrapped in a premium paper box placed inside a woven tote bag. And best of all, it is hand delivered to you within 30 minutes of ordering.

That RM85 does not sound so bad now does it. I know that referencing a burger against a Honda City is also absurd, but you get the point.

So that’s basically what Honda has done. Taken a well known and much loved product, plonked in a cleverly engineered powertrain, increased the quality of everything and made the interior a very nice place to be in.

And then there is the Honda City RS hatchback. 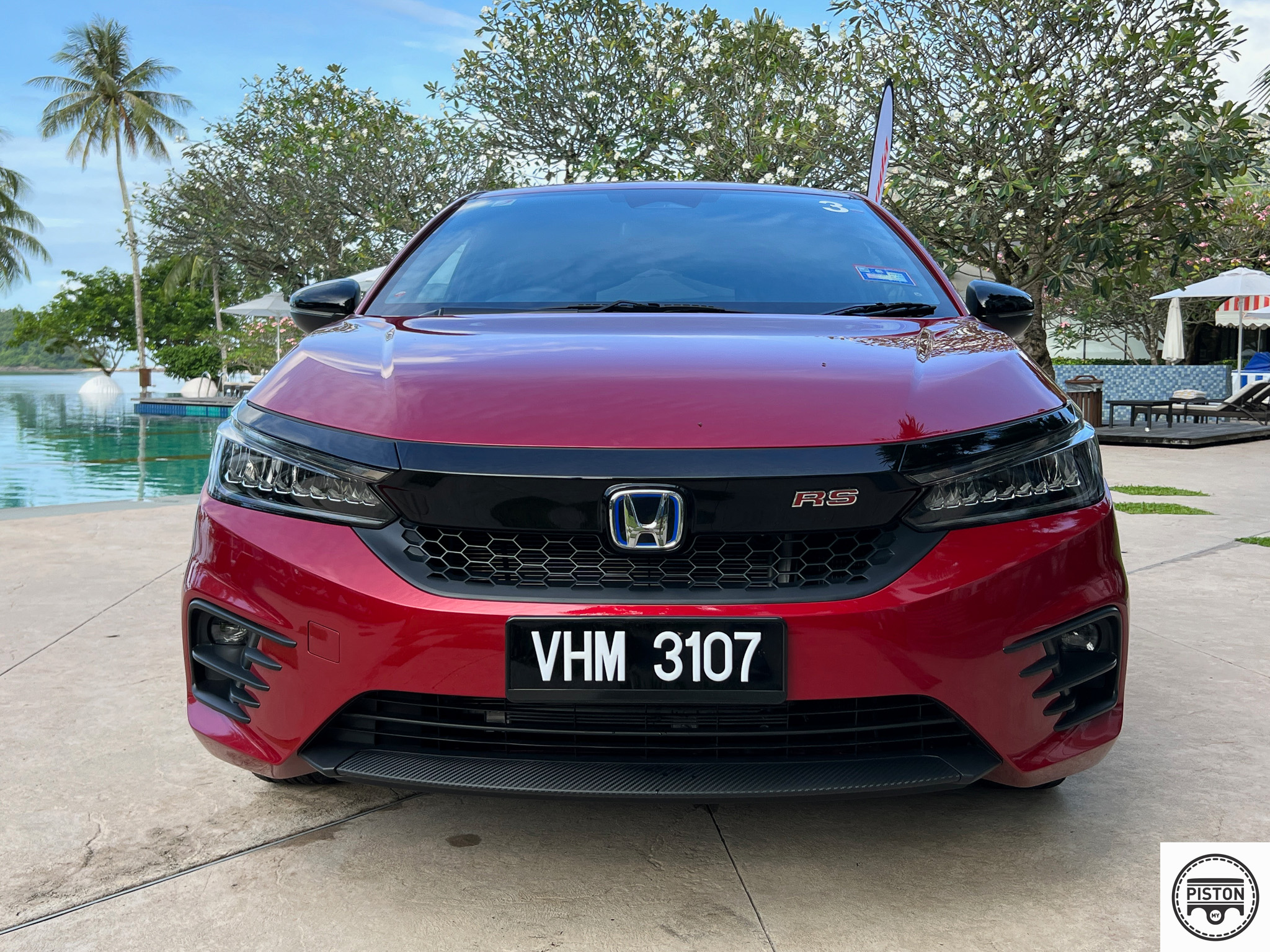 It is basically all of the above but in a hatchback body. And at RM108,000, Honda wants RM2,000 more for it. Why? Because it has something called Ultra Seats, which gives the hatchback a level of practicality that you do not get in the sedan variant.

The Ultra Seats is basically a fancy word for seats that can either fold up to let you store tall items, fold down for long items, and amazingly can fold in such a way that you can basically create a bed which makes the City RS hatchback perfectly suited for all you ‘glamping’ lovers.

The City RS Hatchback is also powered by the same 1.5-litre hybrid powertrain that powers the sedan. 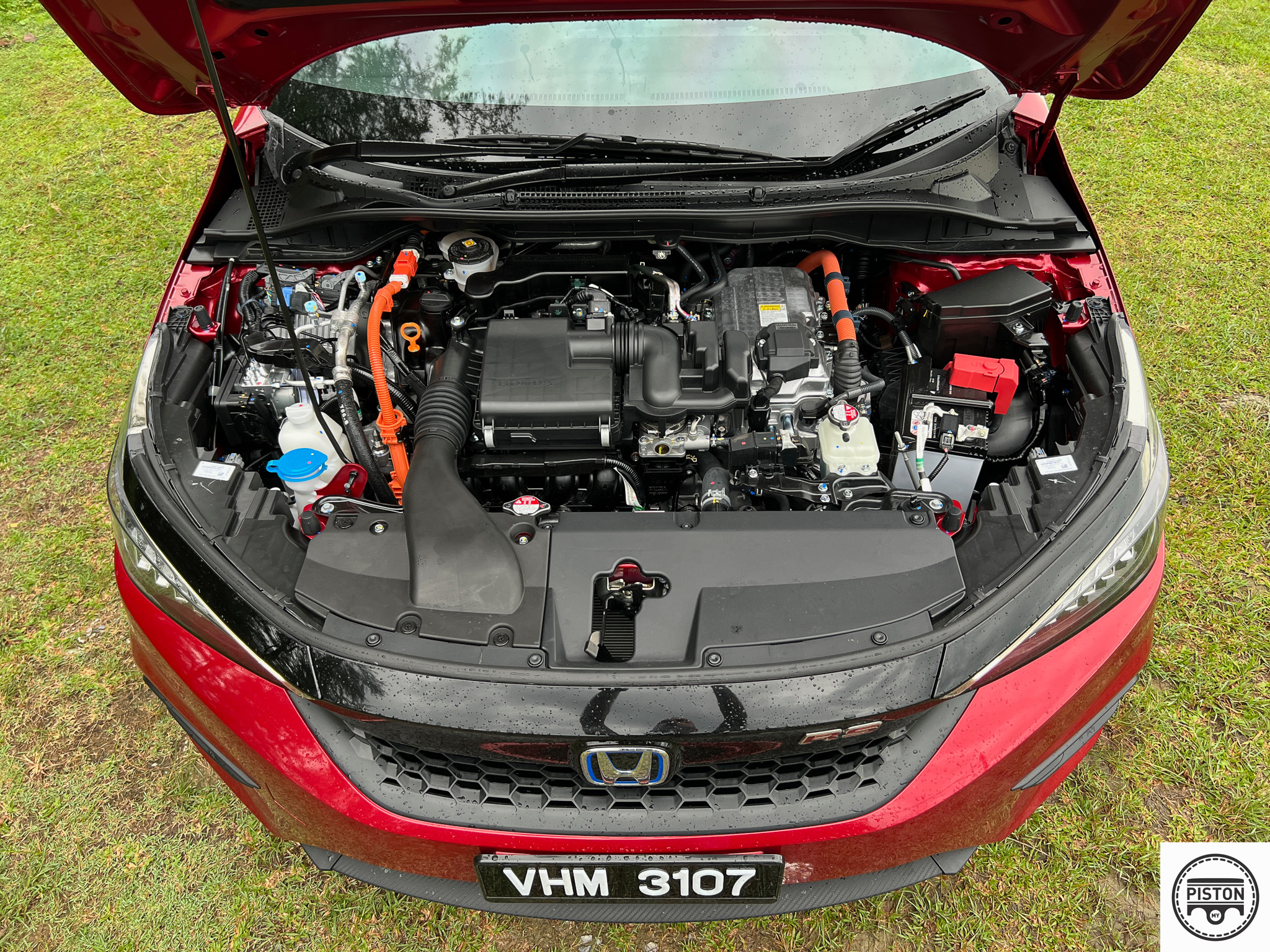 It puts out a mere 98hp and 127Nm of torque. But it has an electric motor that pushes up the torque figure to an impressive 236Nm.

This gives the car a fun character around the corners. I imagine that weekend warriors will love the urgent response and nimble front end the hatchback offers while their parents will appreciate the spaciousness and the fuel economy.

The only thing though is that there is a setback in terms of top speed, while the regular combustion powered variants max out at 194km/h, the RS has a top speed of 175km/h. But while the other variants need 10.7 seconds to reach 100km/h, the RS needs just 9.7. And best of all, according to Honda, the other variants will need 5.6 litres of fuel to reach 100 kilometres. The RS though needs just 3.6 litres, which with today’s fuel prices puts it at just under RM10 to travel 100km. 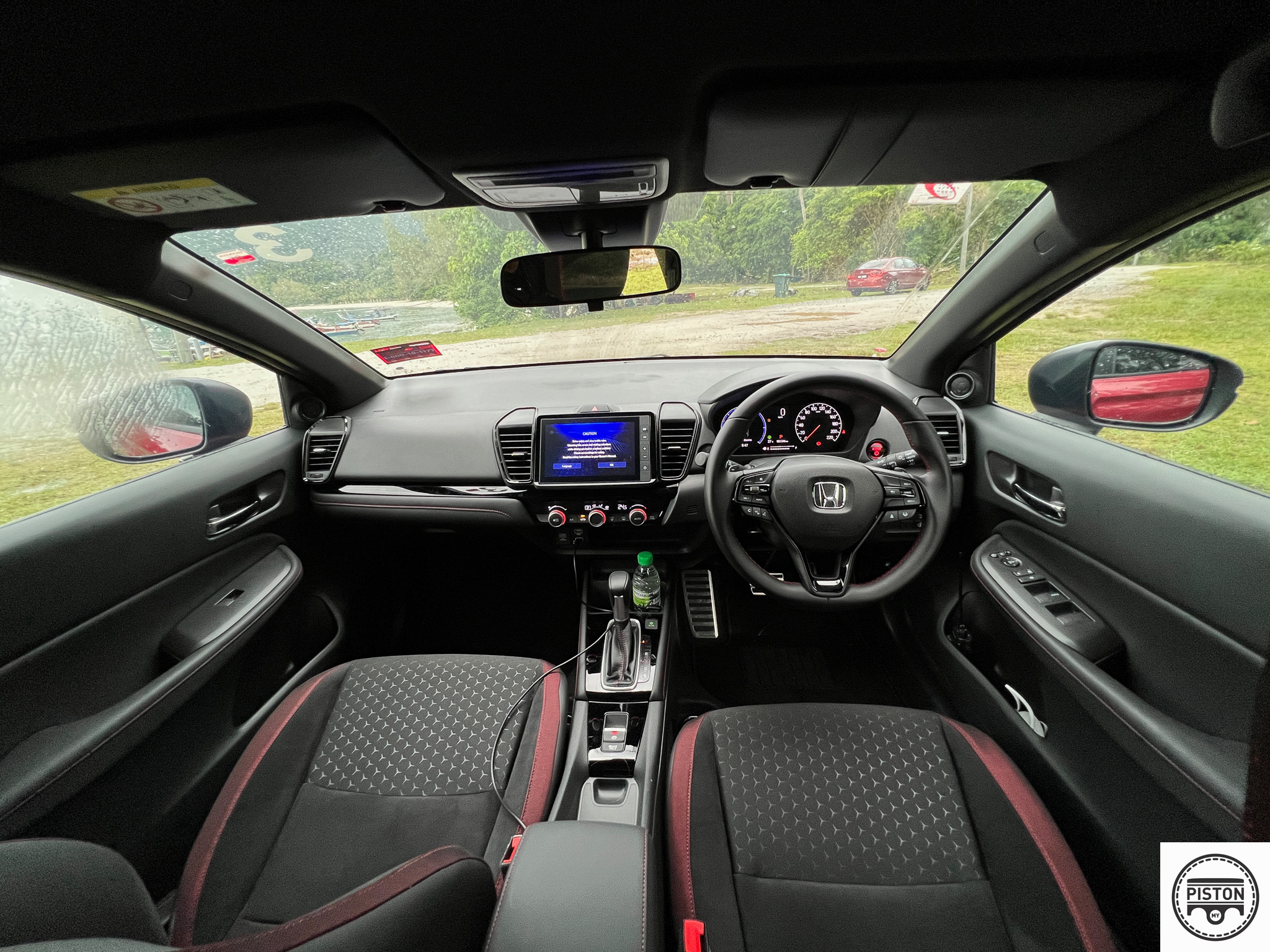 But it’s not just the powertrain that makes the RS model stand out from the rest. It is also the interior that works a charm for me.

The seats are the first thing that charm your senses. And the fact that they come wrapped in something Honda calls Ultra Suede makes it nice to touch and even nicer to sit on.

And because this is the RS variant, the side bolstering holds you in place every so gently. 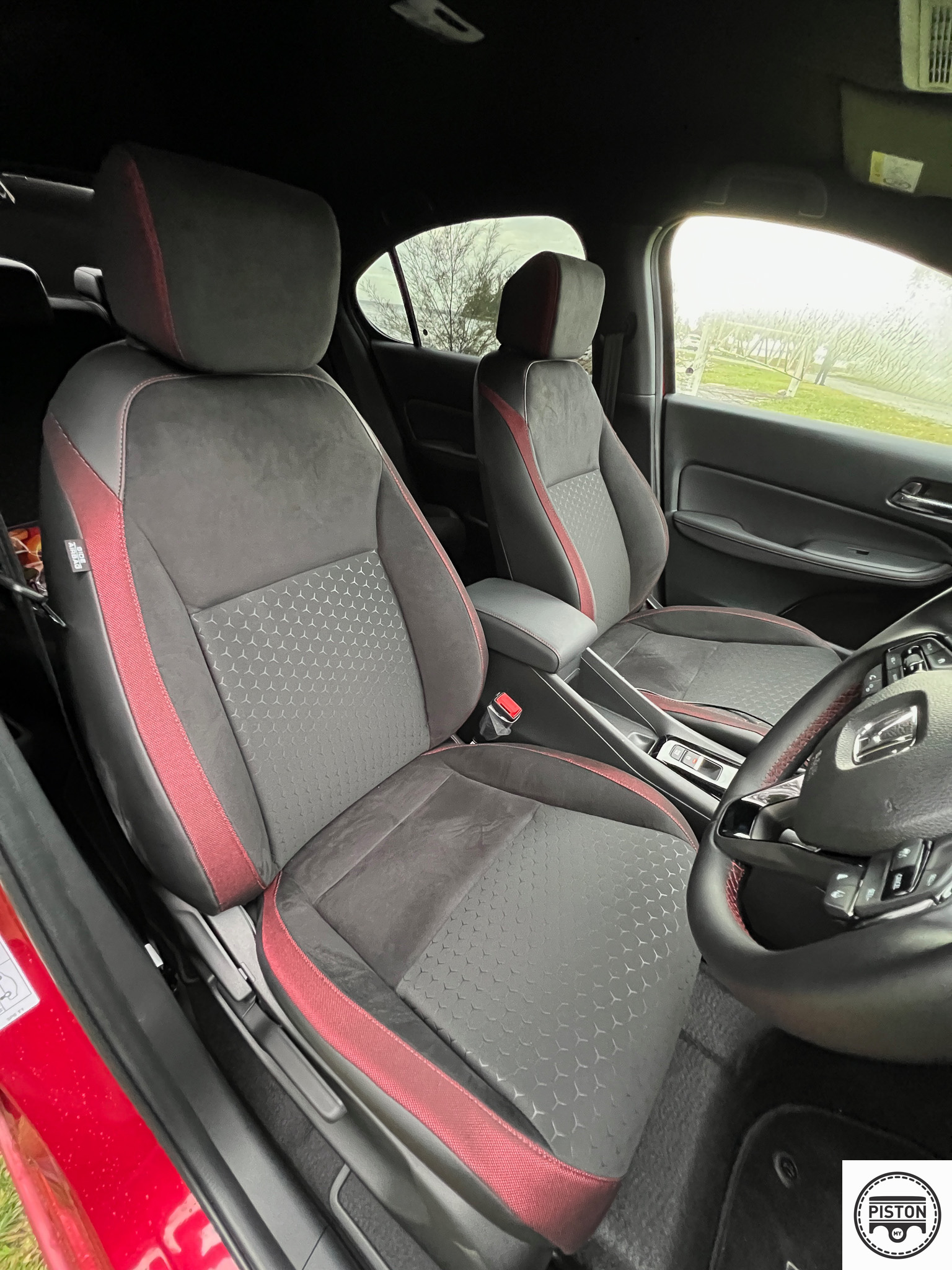 The dash is easy on the eye and to the touch. The steering wheel feels meaty in your hands and the buttons actually do feel like they belong in a RM100,000 car. 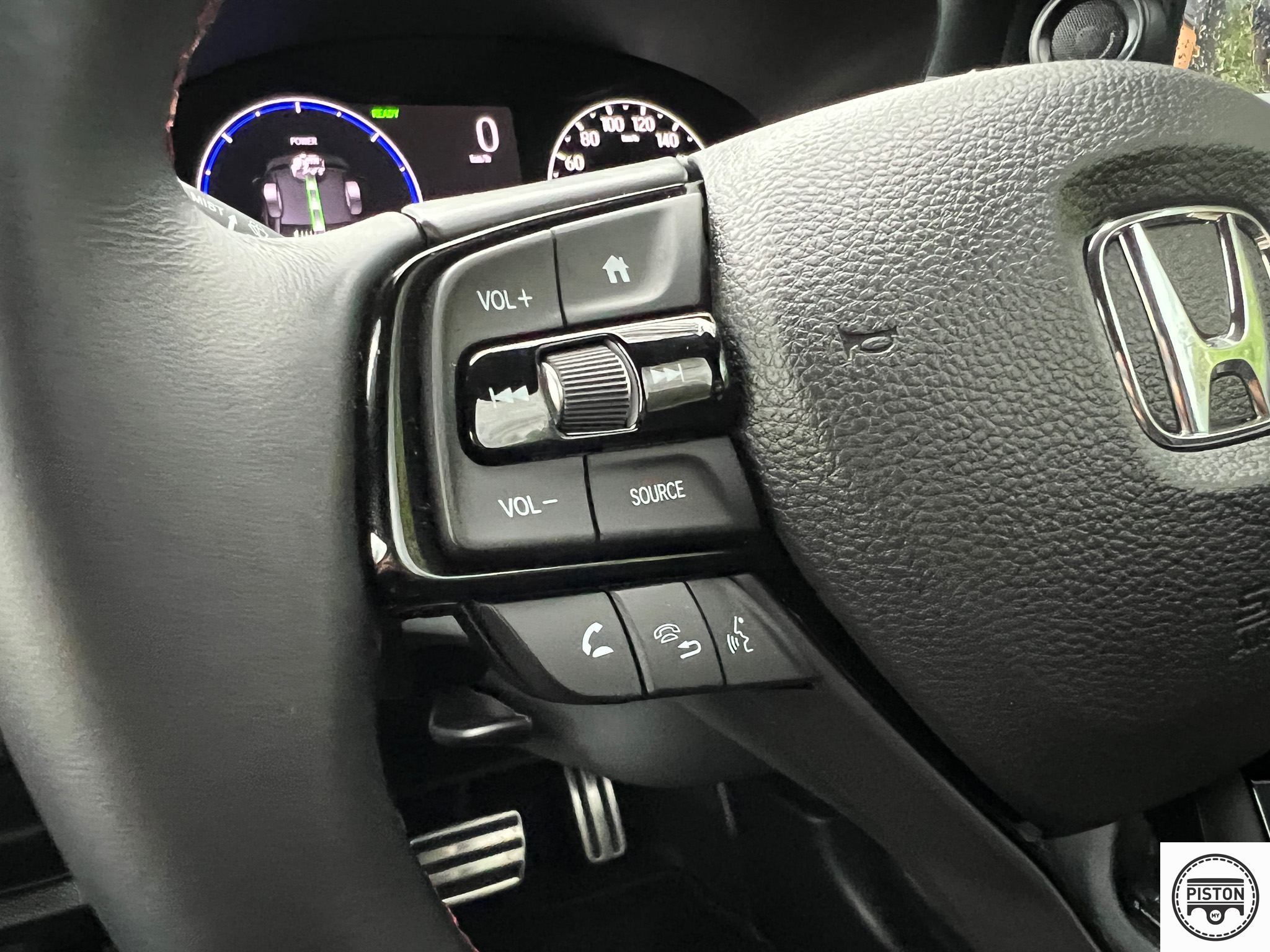 On that point, even the tiny weighted clicks of the air-conditioning dial invoke a premium feeling that you would not expect to get in a City. 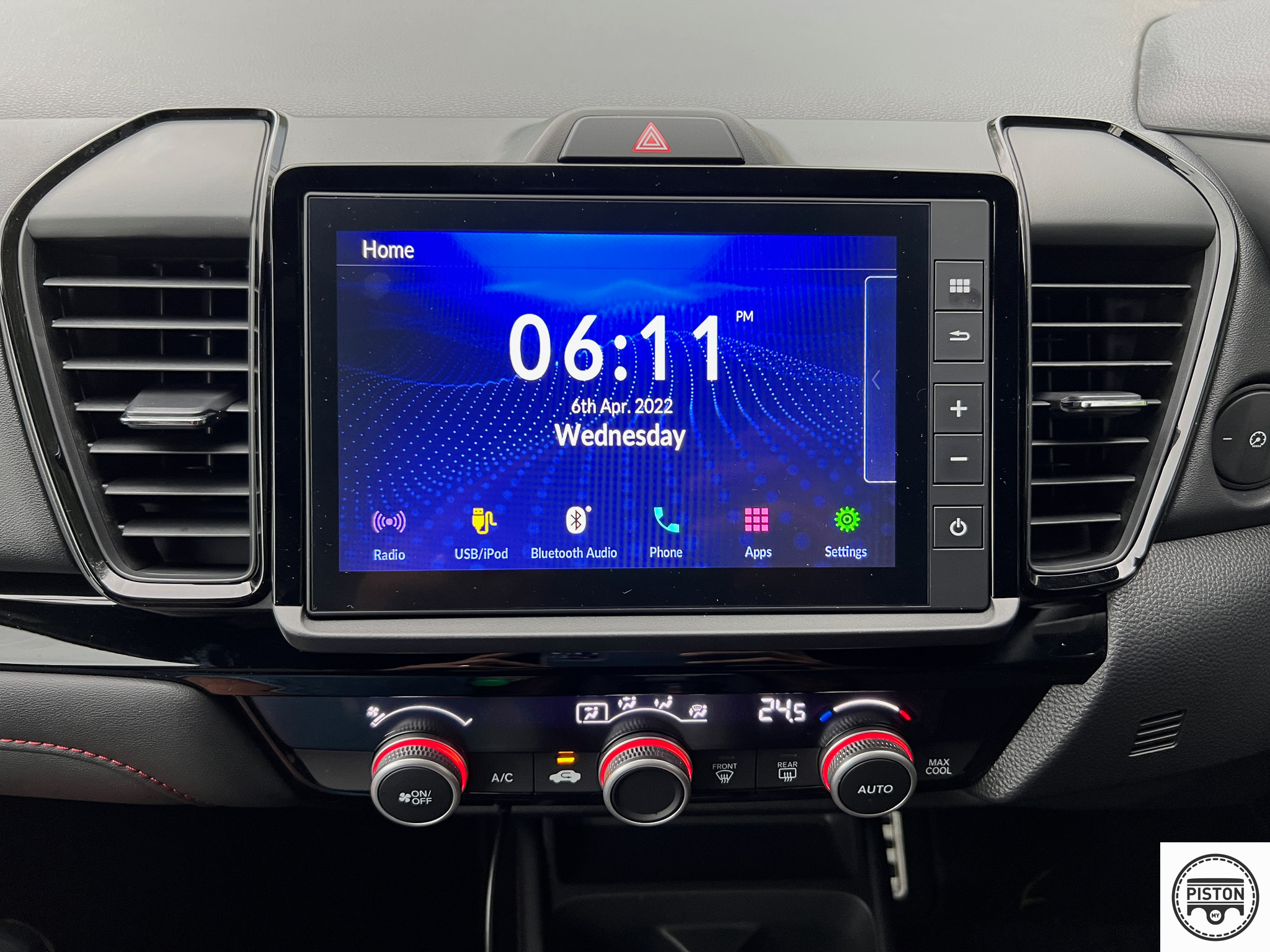 The entertainment system is accessed through an eight-inch display that also offers Apple CarPlay and Android Auto. It also offers smartphone mirroring capability that lets you access your navigational and other favourite applications and mirror those on the screen.

Honda has undoubtedly done a remarkable job with the interior of the new City. During our test drive event, there was a Toyota Yaris available for comparison and the interior of that felt dated and unimaginative.

The final thing that makes the argument for this City costing above RM100,000 is the fact that it comes with Honda’s popular Sensing safety suite. 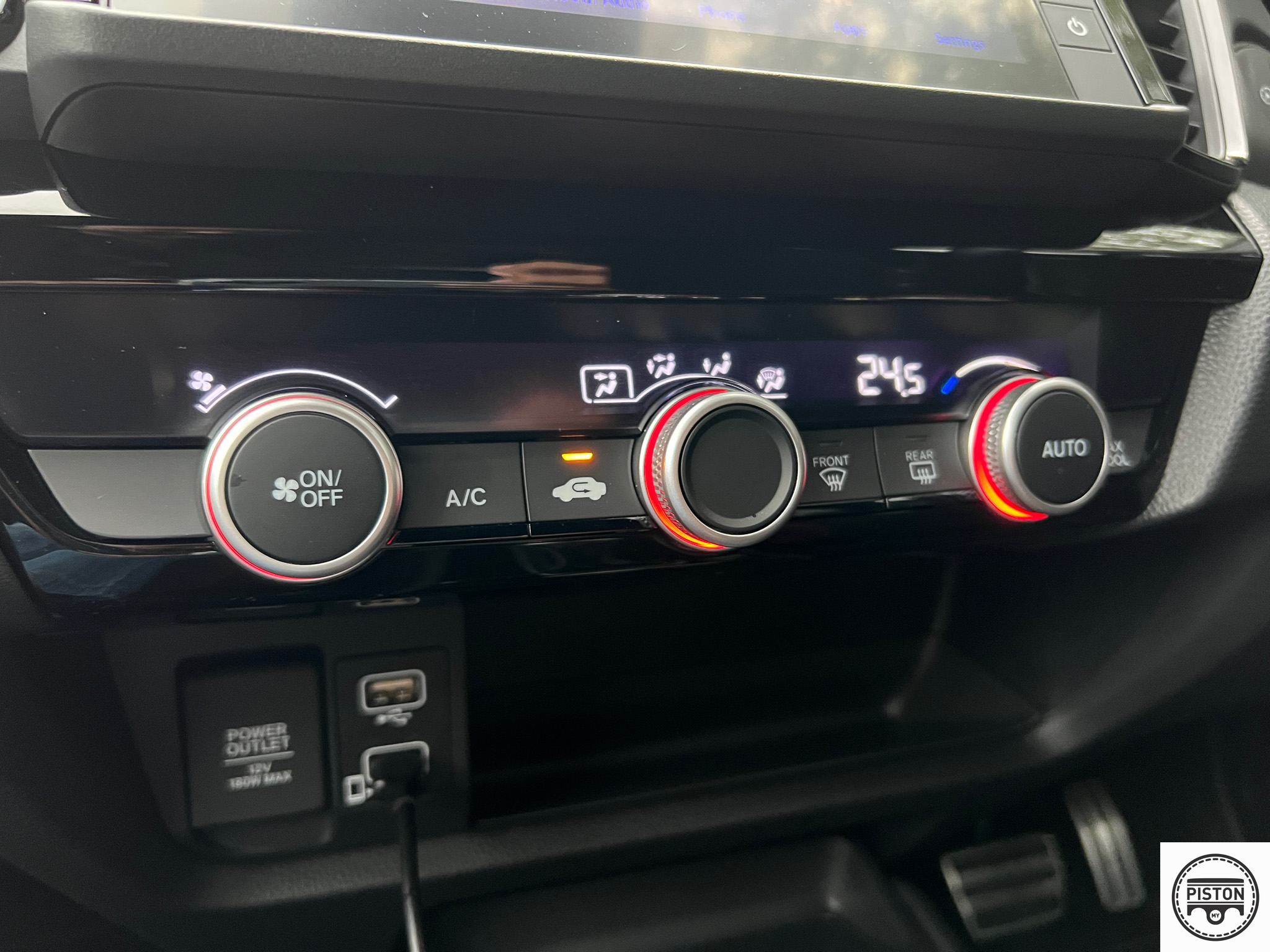 Honda Sensing is basically a collection of advanced safety technologies that make the City an incredibly safe car, perhaps one of the most laden with safety tech.

Before we dive into what is on offer with Honda Sensing, keep in mind that the City RS hatchback already has LaneWatch, Hill Start Assist, Auto Brake Hold, Vehicle Stability Assist, six airbags, ABS and EBD. 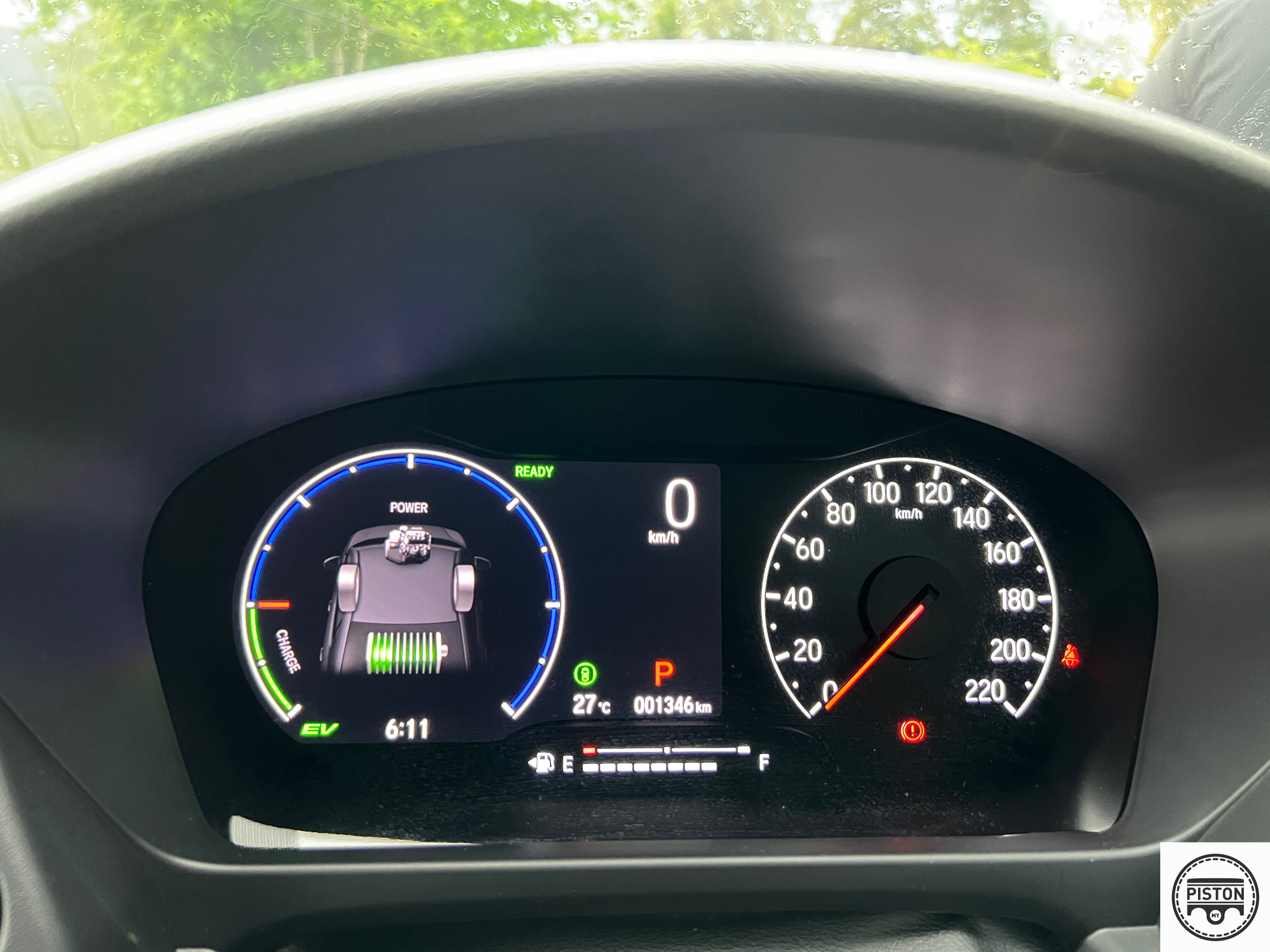 Consider for a second that these are exactly the same safety systems also available in the pricier Honda Civic and the Honda CRV. The only omission being that the adaptive cruise control does not offer stop and go function.

Now, is the Honda City RS hatchback worth the RM107,000 asking price?

There is no doubt that it is a fine car with premium feel and a powertrain that balances the holy grail of power and economy. It is also packed with safety tech and has a drive that will put a smile on the faces of the young and not so young. 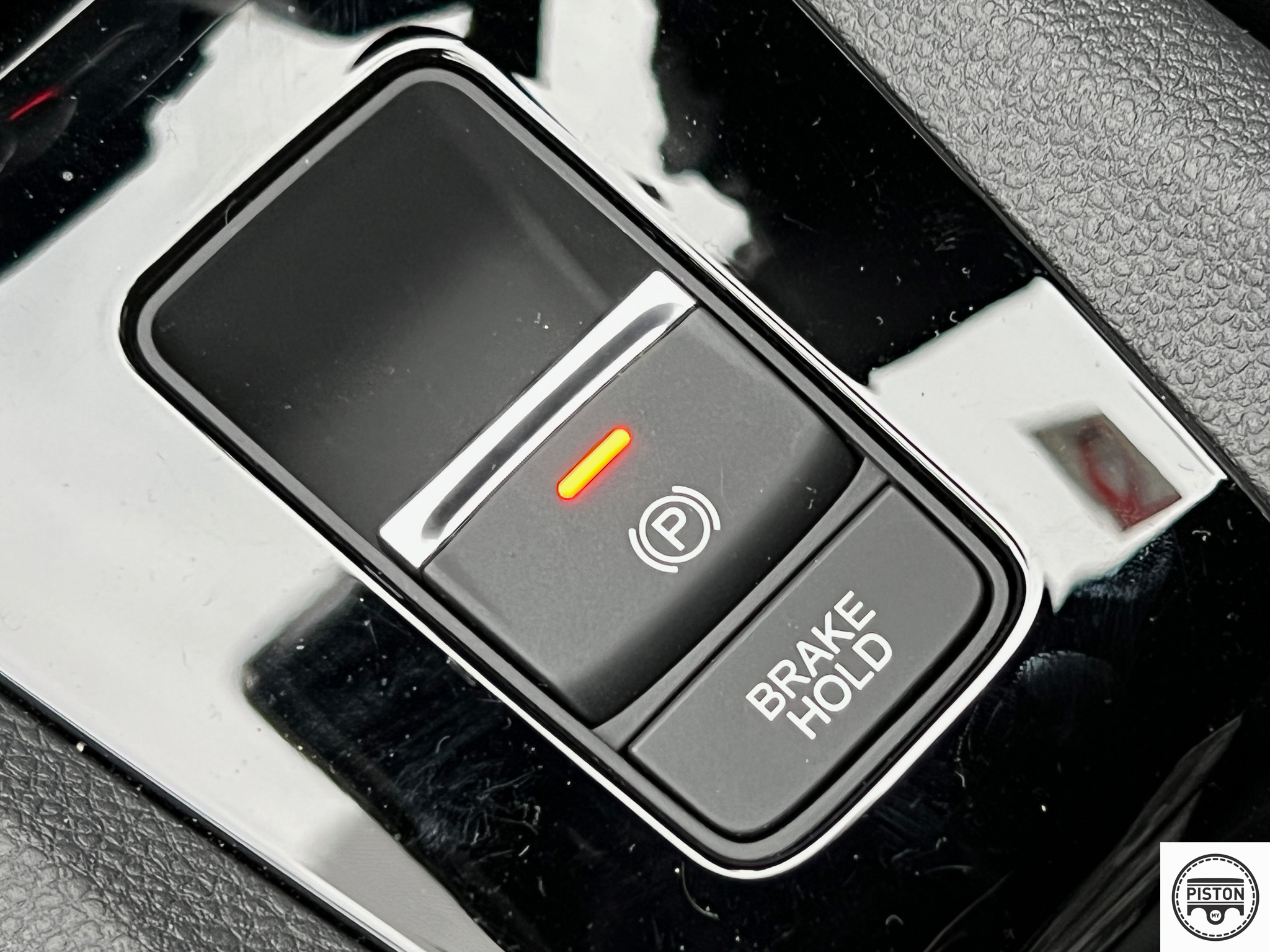 The simple answer would be yes for those who appreciate the tech. And the not so simple answer would be to consider the V-Spec which is a full RM15,000 cheaper and features all of the above but minus the hybrid powertrain and the Ultra Suede seats with red stitching. I actually prefer the leather seats available in the V-Spec than the fabric seats of the RS, as plush as those may be. 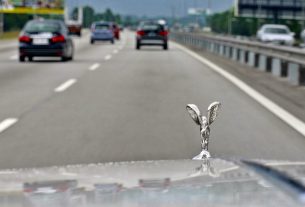 Leading every Rolls-Royce for 110 years – the Spirit of Ecstasy 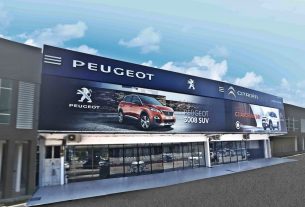 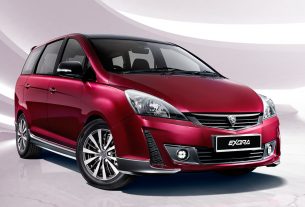