Ford’s SuperVan series in Europe began in 1971, and since then, there have been three other SuperVans. This week, at the Goodwood Festival of Speed in England, Ford showed off the fourth Supervan and not surprisingly, it opens the first electrified chapter in the legendary series. The Ford Pro Electric SuperVan uses no petrol and fully utilises the potential of electric performance and enhanced connectivity to achieve the highest performance of any Ford van ever. 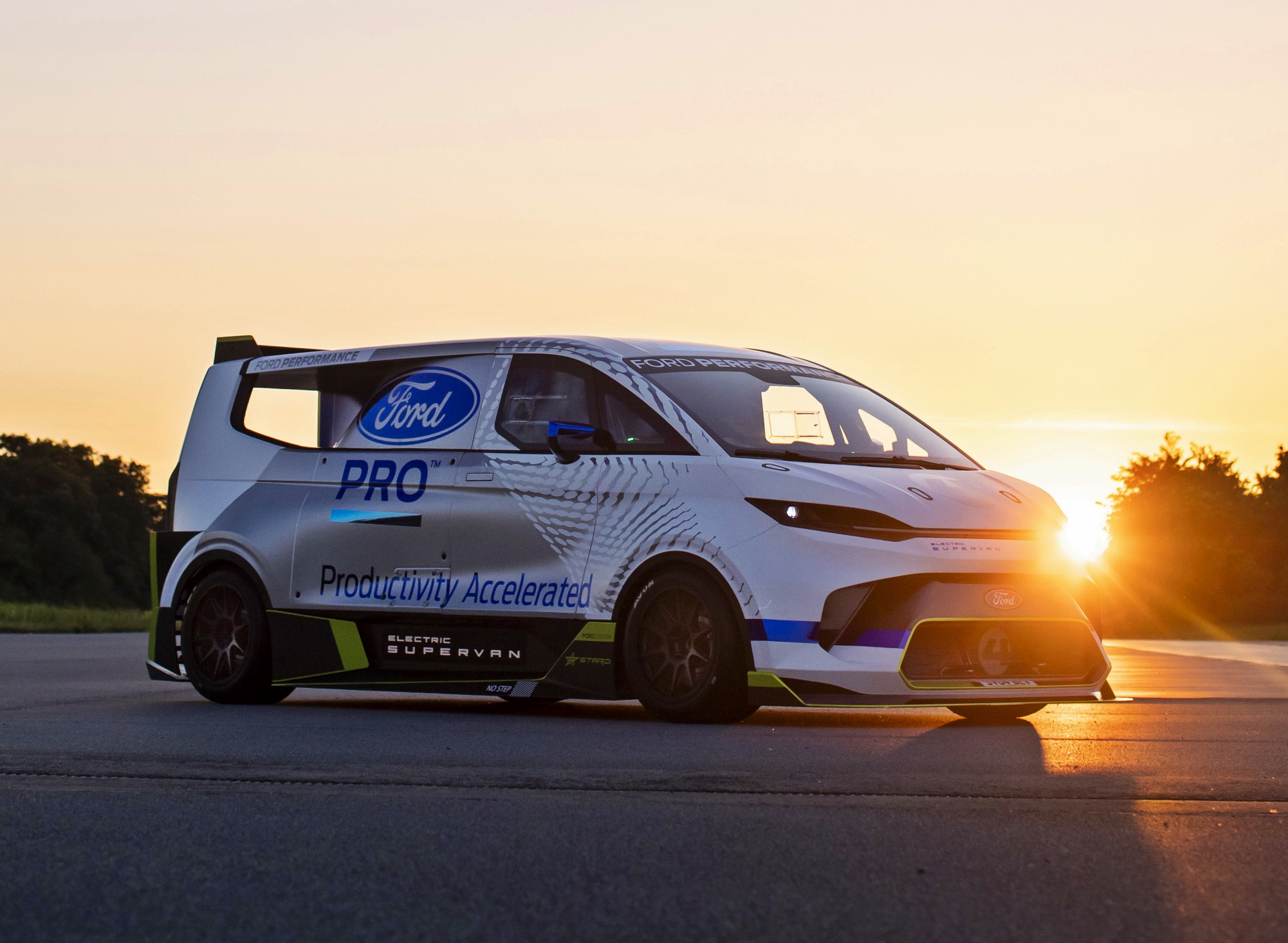 The enhanced connectivity keeps the driver informed and enables real-time data transmission for remote vehicle management and optimised performance, just like the integrated services that can accelerate the productivity of over 125,000 Ford Pro customers across Europe. Selectable drive modes and regenerative braking technologies similar to those on Ford production electric vehicles also feature.

The striking, all-electric demonstrator vehicle was developed in secret by Ford Performance and electrified rally and racing specialists STARD in Austria, with exterior design work was done by the Ford Design team in Germany. 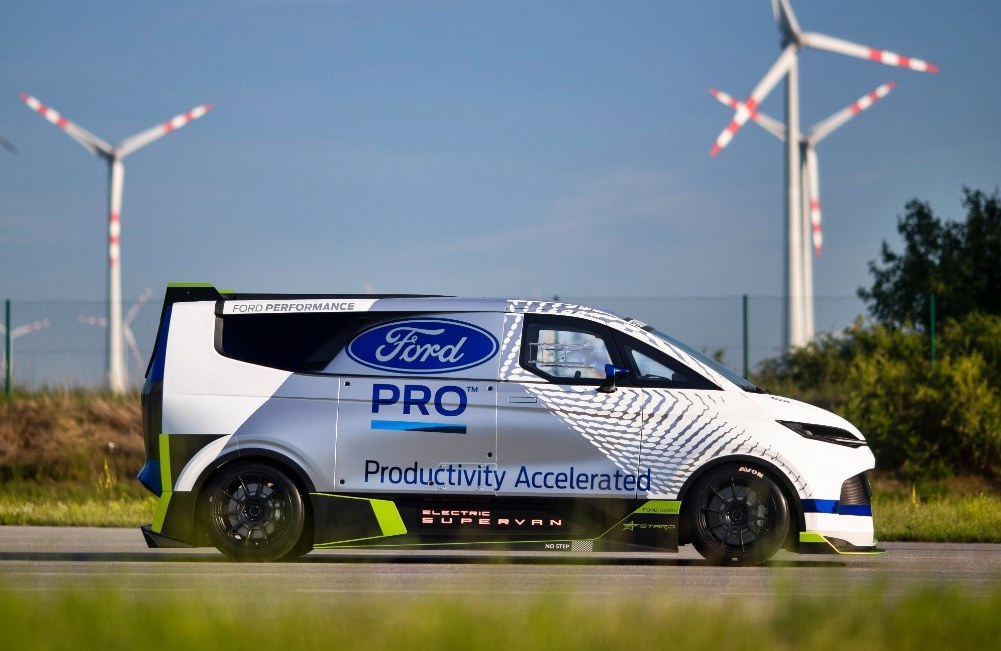 “We’re bringing SuperVan into the 21st century with 2,000 ps of all-electric power for unmatched excitement and unmistakeable styling inspired by the new E-Transit Custom. But performance isn’t all about horsepower – the Electric SuperVan’s processing power means engineers can use real-time vehicle data to optimise its performance, just like on a top-level racing car,” said Mark Rushbrook, Global Director, Ford Performance Motorsports.

“Ford Pro is all about accelerating productivity for our customers – so why not create a new Electric SuperVan that proves the power of electrification and connectivity?” said Hans Schep, general manager, Ford Pro, Europe. “This incredible demonstrator vehicle takes E-Transit Custom’s advanced engineering and distinctive look to a whole new level, and is high-speed proof of the power of Ford Pro’s connected services ecosystem.” 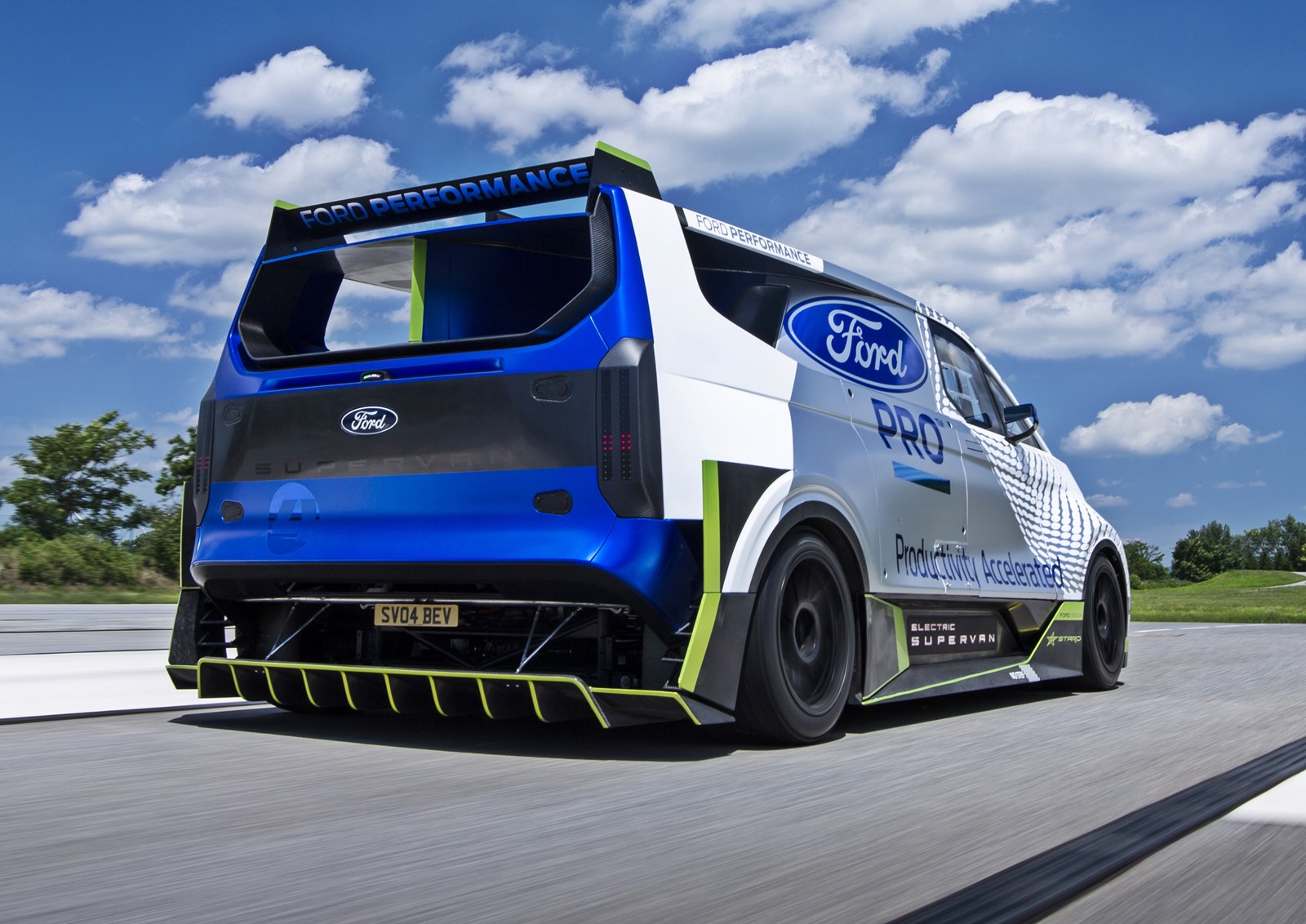 The Ford Pro Electric SuperVan is a one-off demonstrator, which gave  the Ford Design team a lot of freedom to create a wild-looking vehicle that reflects extreme performance capability. The outlandish wheel arches, muscular style and one-off livery are the most extreme expression of Transit design. Meanwhile, the fully-electric powertrain offered the development team lots of freedom with fewer of the packaging and cooling restrictions that come with a combustion engine.

“The fourth chapter of the SuperVan story is designed to be the fastest, most extreme yet while keeping the Transit DNA. The proportions are a more dramatic version of what we developed for the E-Transit Custom and the front light bar creates a futuristic expression, making the Electric SuperVan the absolute pinnacle of Transit design language. The chance to be part of the iconic SuperVan story and reimagine what it could be in the 21st century was a dream opportunity,” said Amko Leenarts, Director, Design, Ford of Europe. 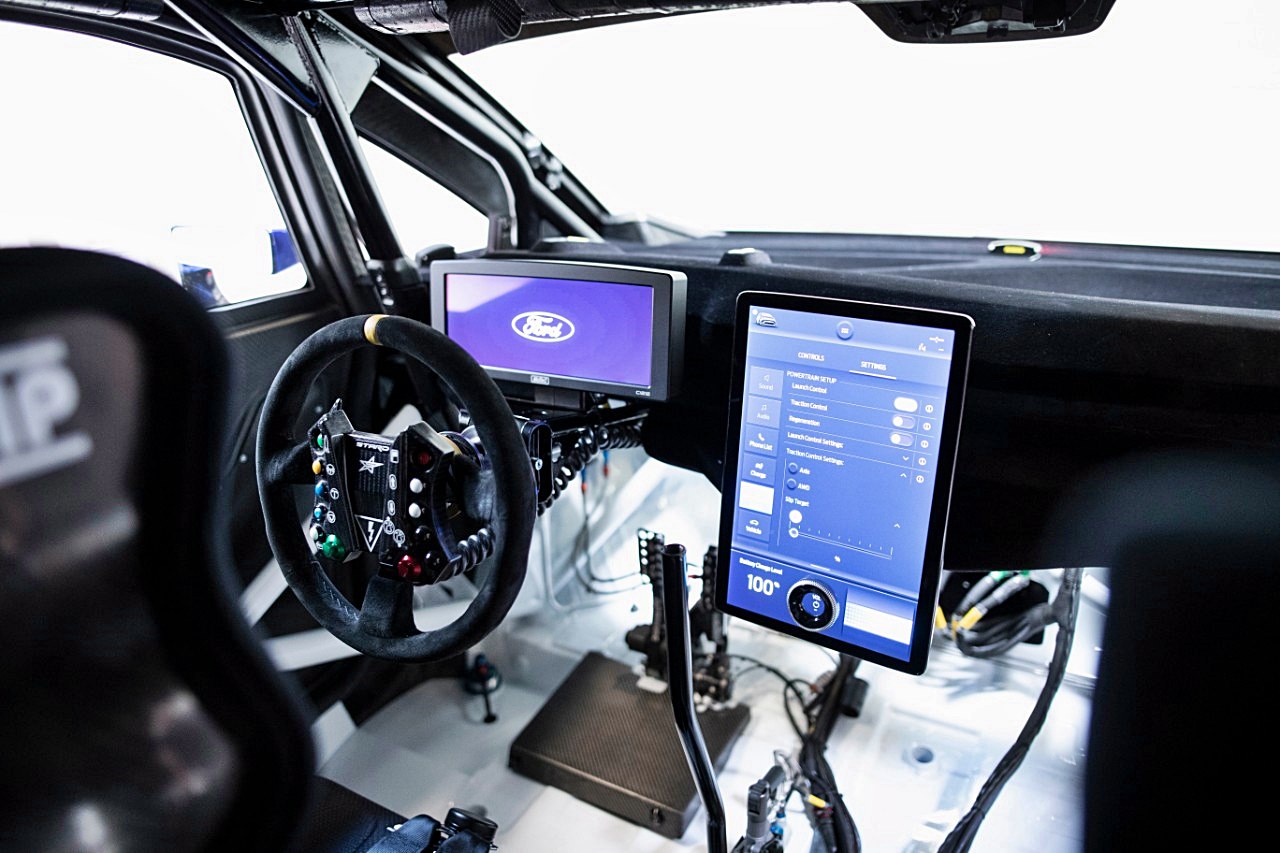 The vehicle’s motorsport-spec construction marries the E-Transit Custom floorpan with a steel spaceframe and lightweight composite body panels. A bespoke 50 kWh liquid-cooled battery pack is mounted for optimum weight distribution and a low centre of gravity and can be fully recharged in approximately 45 minutes using a standard electric vehicle fast-charger.

A suite of onboard cameras can immerse audiences around the world in the action during SuperVan’s impressive high-performance runs. As on the Ford E‑Transit, the driver can pull camera feeds onto the in-cab screen and switch between them to help position the vehicle. 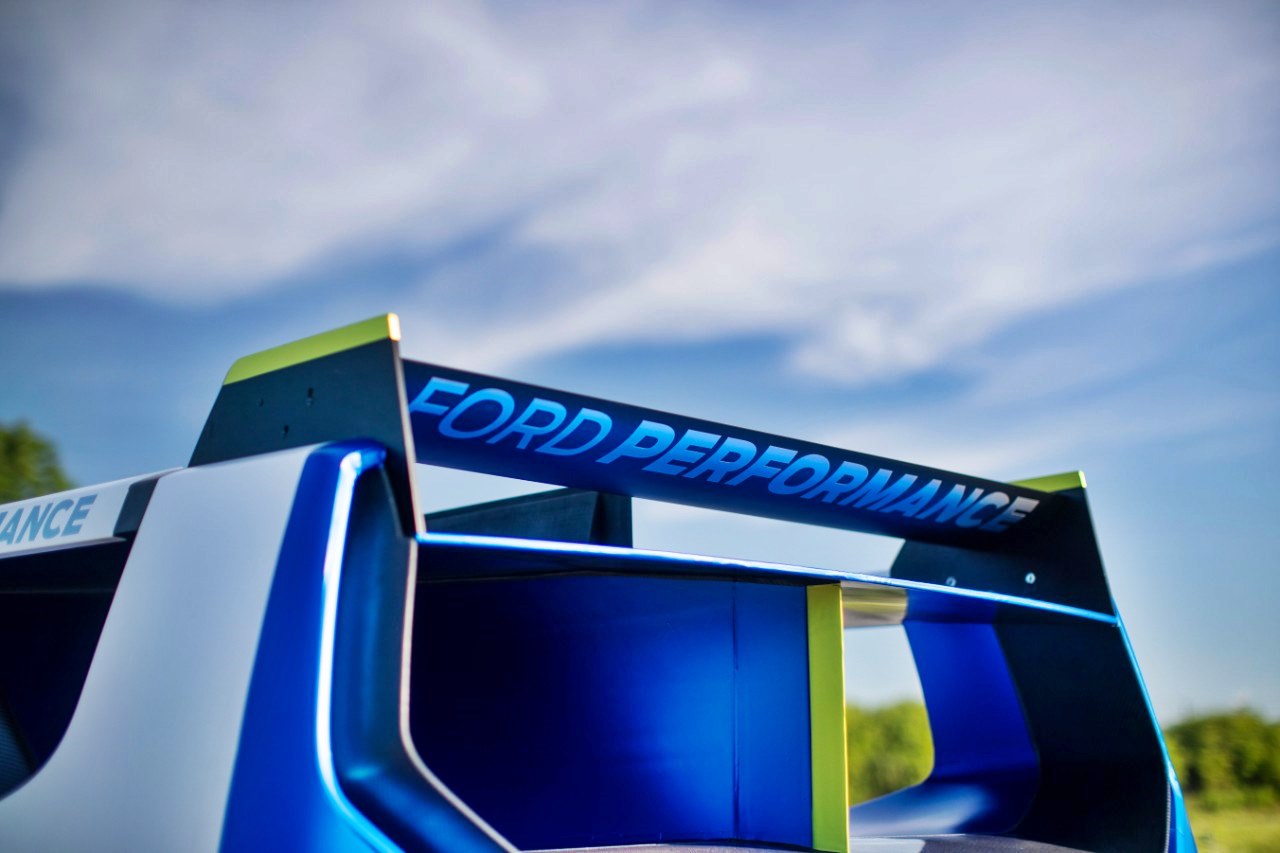 Ford Performance and STARD’s motorsport input is immediately obvious; the dramatically sculpted body’s front splitter, side skirts and rear diffuser would be at home on a racing car, while the radical rear design’s cutaways and dorsal fin flow into the rear wing to generate downforce and push the SuperVan into the track for as much grip as possible.

The latest Supervan continues the tradition started by the first one 51 years ago. That van has a mid-mounted engine taken from the Le Mans-winning Ford GT40. The next Supervan continued with the formula was taken further for SuperVan 2 with a lightened Transit Mk. 2 body draped over the monocoque. It had the 590 ps Cosworth V8 of Ford’s C100 racing car. The Supervan 3 was a facelifted Transit Mk. 3 lookalike, powered by the 650 ps Cosworth HB engine used in Formula 1 cars then. 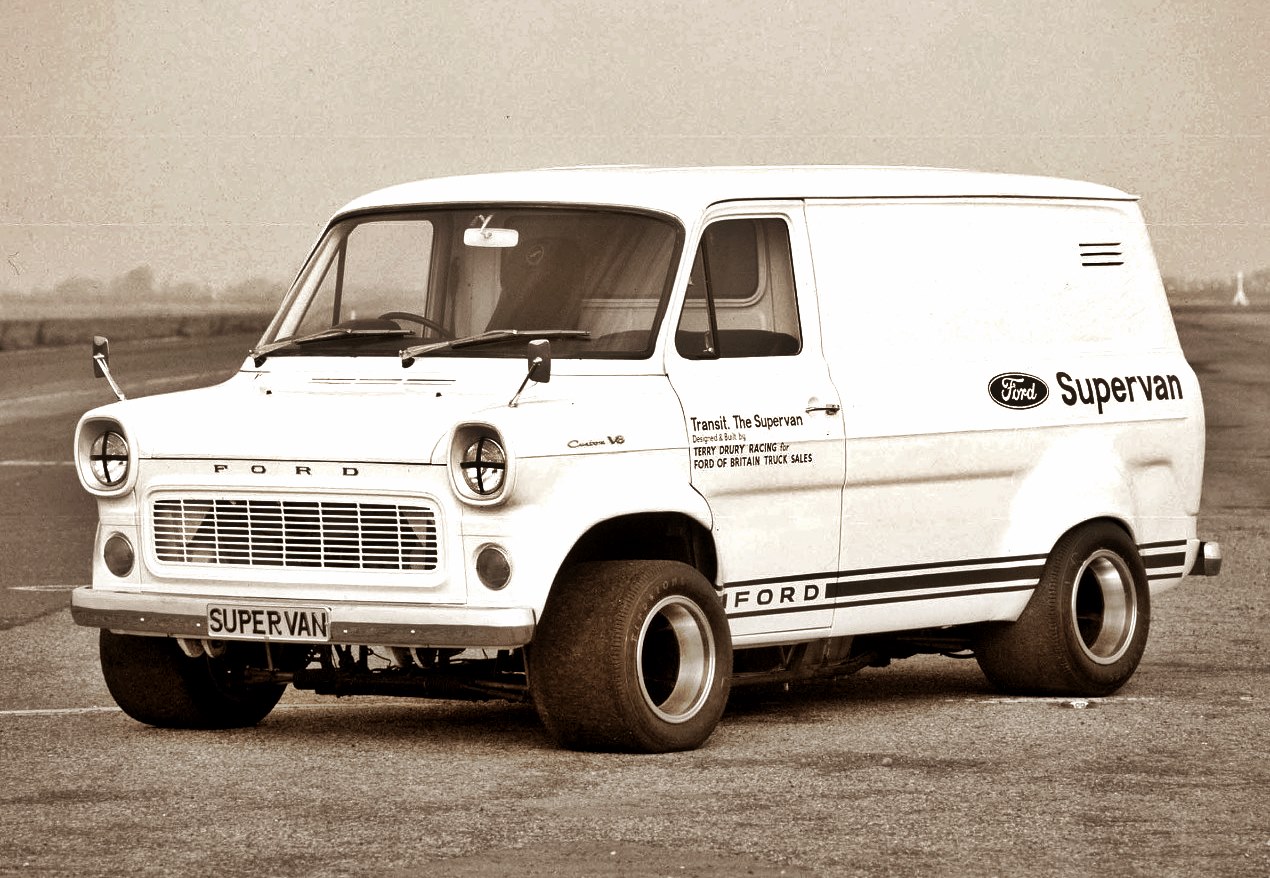 Beyond demonstrating Ford’s advanced electric vehicle and connectivity know-how, the Electric SuperVan is also a high-speed science experiment. Its demanding driving scenarios and unrestricted design concept allow Ford to push the boundaries of electric vehicle engineering and connectivity to improve its future race cars and road-going vehicles, software and services. 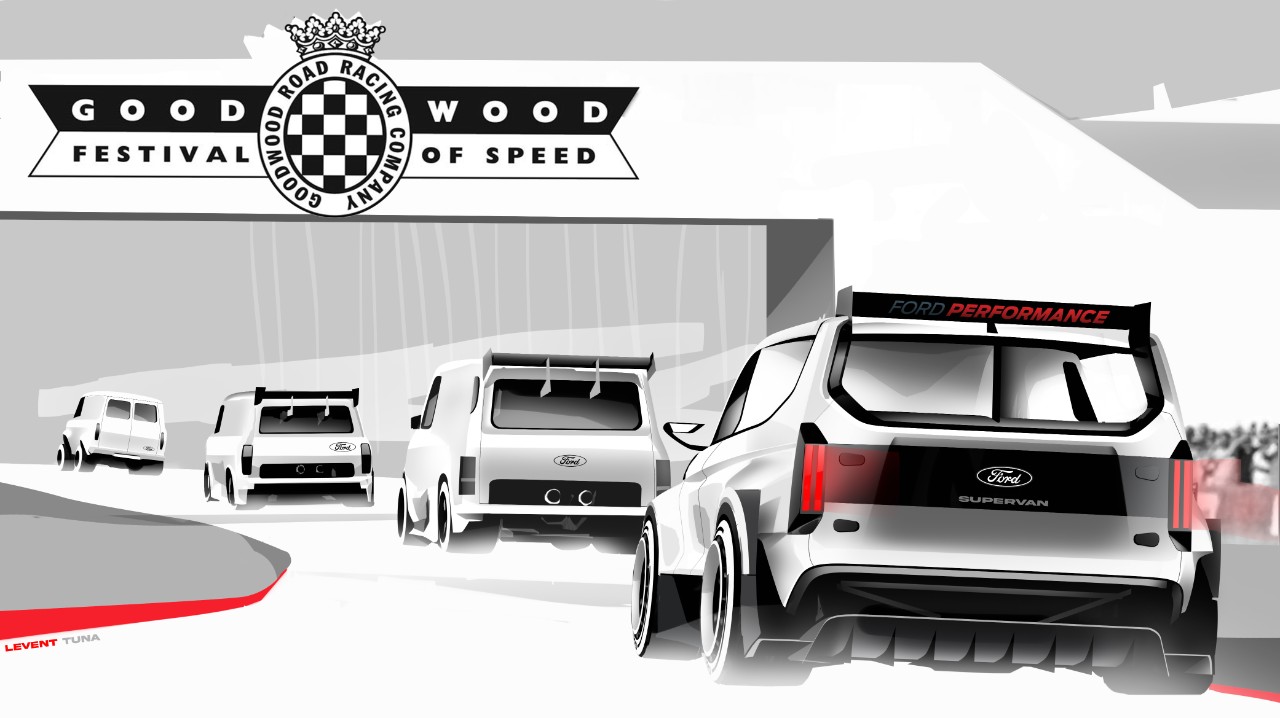