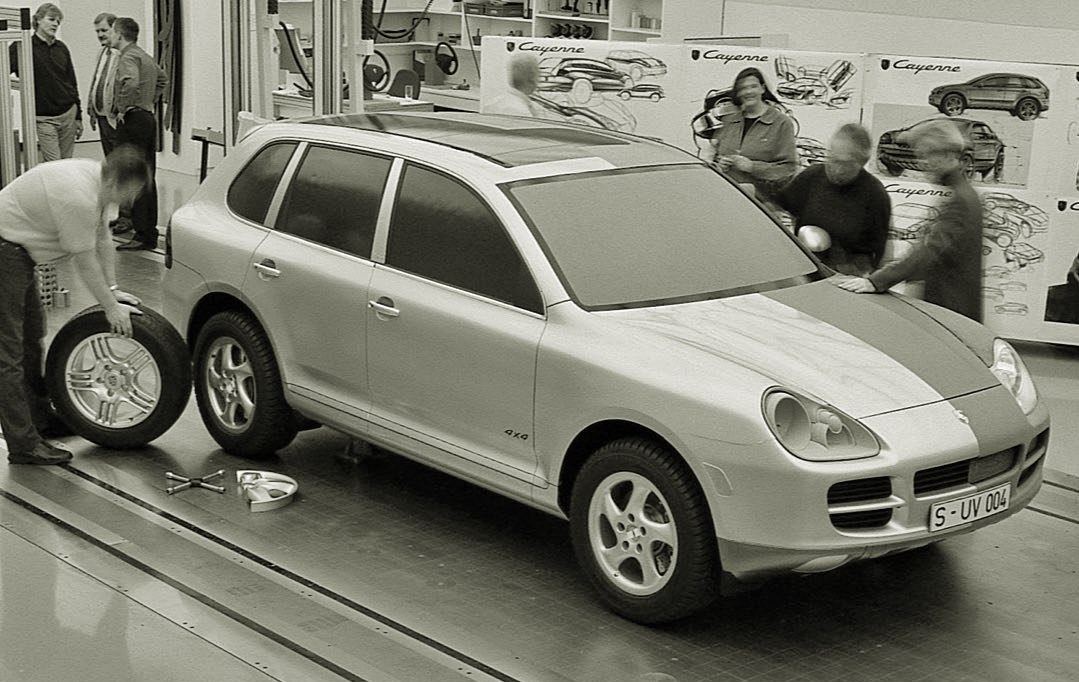 Ferry Porsche predicted it back in 1989: “If we build an off-road model according to our standards of quality – and it has a Porsche crest on the front – people will buy it.” He would go on to be proved right. Since 2002, the Cayenne has been one of the top selling models of the carmaker, a success globally and now, it is even being assembled in Malaysia.

The decision to develop a SUV after decades of making sportcars was influenced by the recommendation of the sales organisation in the USA – Porsche’s largest market at the time. While a people-carrier had been under consideration, the company opted for an off-road vehicle as it was increasing in popularity in North America. BMW and Mercedes-Benz had even set up new factories there to build their first SUVs in the second half of the 1990s.

Crucial decision for Porsche
The decision was a crucial one because, at the beginning of the decade, the company found itself in one of the most significant economic crises in its history. It was in the red and delivered only 23,060 cars in the 1991/92 financial year. While the Boxster (launched in 1996) helped Porsche out of its downturn, it was clear that the legendary 911 and the new mid-engined model would not be enough to ensure a secure future. A ‘third Porsche’ was therefore necessary and this would eventually be a SUV.

This saw the start of the Colorado project, a massive undertaking tackled as part of a joint project with Volkswagen and announced in June 1998. However, Porsche was not content merely to build just another SUV but aimed to give the top competitors in the off-road segment a strong rival. In fact, in early advertising, it even suggested that the Cayenne not be considered just ‘another SUV’ but rather, another Porsche. 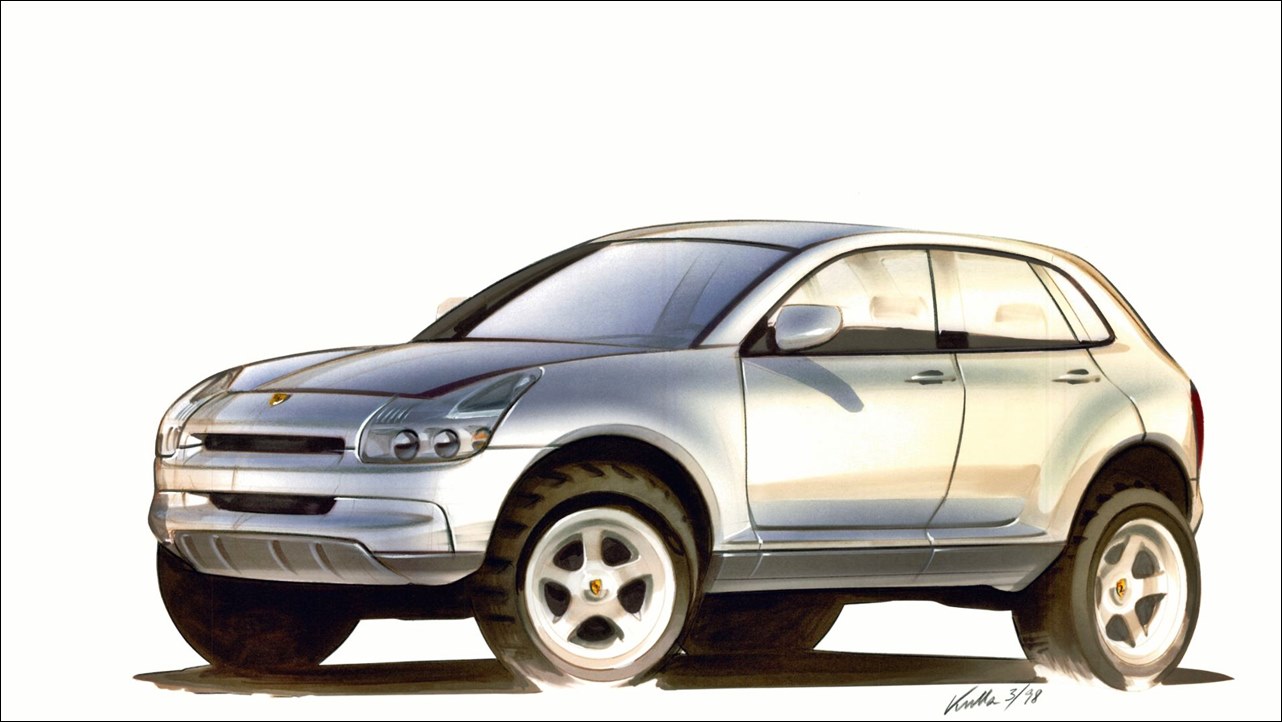 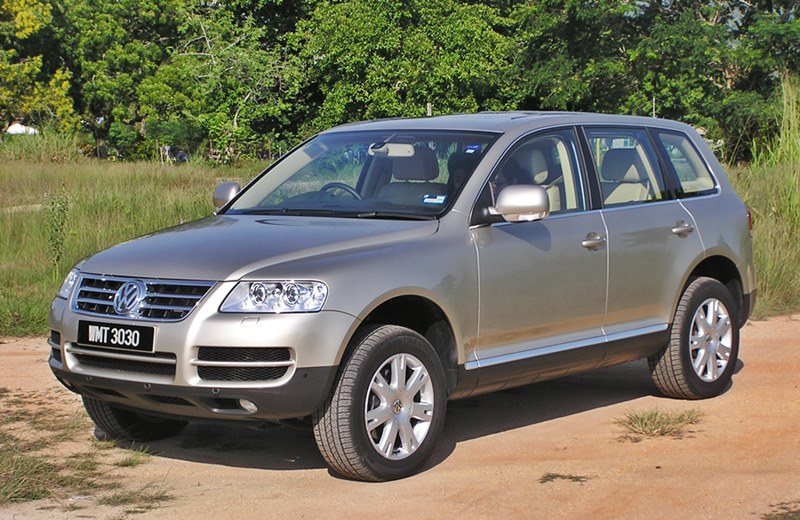 Like BMW with its X5, Porsche could not offer a product that did not also have the brand’s DNA of superior driving dynamics. Thought the platform was shared with the Volkswagen Touareg, each company initially used their own engines and developed their own chassis set-ups. Porsche was responsible for developing the joint platform, while Volkswagen contributed its production expertise for large volumes.

A very different type of Porsche
It was the first time in Porsche’s history that, instead of a sportscar, a blueprint for an SUV was required. This was, in a way, the exact opposite of a sportscar layout – a big, high-roofed car with 4  doors and room for 5 people and their luggage. Additionally, the Cayenne needed much greater ground clearance than a classic sportscar, as it was expected to count among the best when driving off-road as well.

“Of course, it wasn’t at all easy to express the identity of the Porsche brand in a car that had absolutely nothing in common with the existing models made by our company,” said Harm Lagaay, head of the design department. The designer spent a whole year on the headlights alone. It wasn’t just that they had to incorporate the low and high beams and the cornering light while preserving the clear lines of the Cayenne body – these were among the components that guaranteed the brand identity.

Even today, the face of the 996-generation 911 can be seen in the face of the first Cayenne. This impression was reinforced by what is referred to as the topography of the front section. The highest point of the wings and the headlights is above that of the bonnet. This is a distinguishing feature for a Porsche, because these contours are a clear visual reference to the design of the iconic 911. However, it was significantly more difficult to incorporate this specific element in the Cayenne, which would have a big V8 engine under the bonnet.

The Porsche product became a brand
Another feature of the 911-style bonnet is its noticeable taper towards the front. The designers also wanted to adopt this for the Cayenne, but the engineers initially suggested a square engine bonnet. This would make it easier to access the air filter and the headlights. The designers prevailed on this point, but they also worked with the car’s engineering team on areas that were not visible. For example, they worked together to find an optimised arrangement of the air filter. 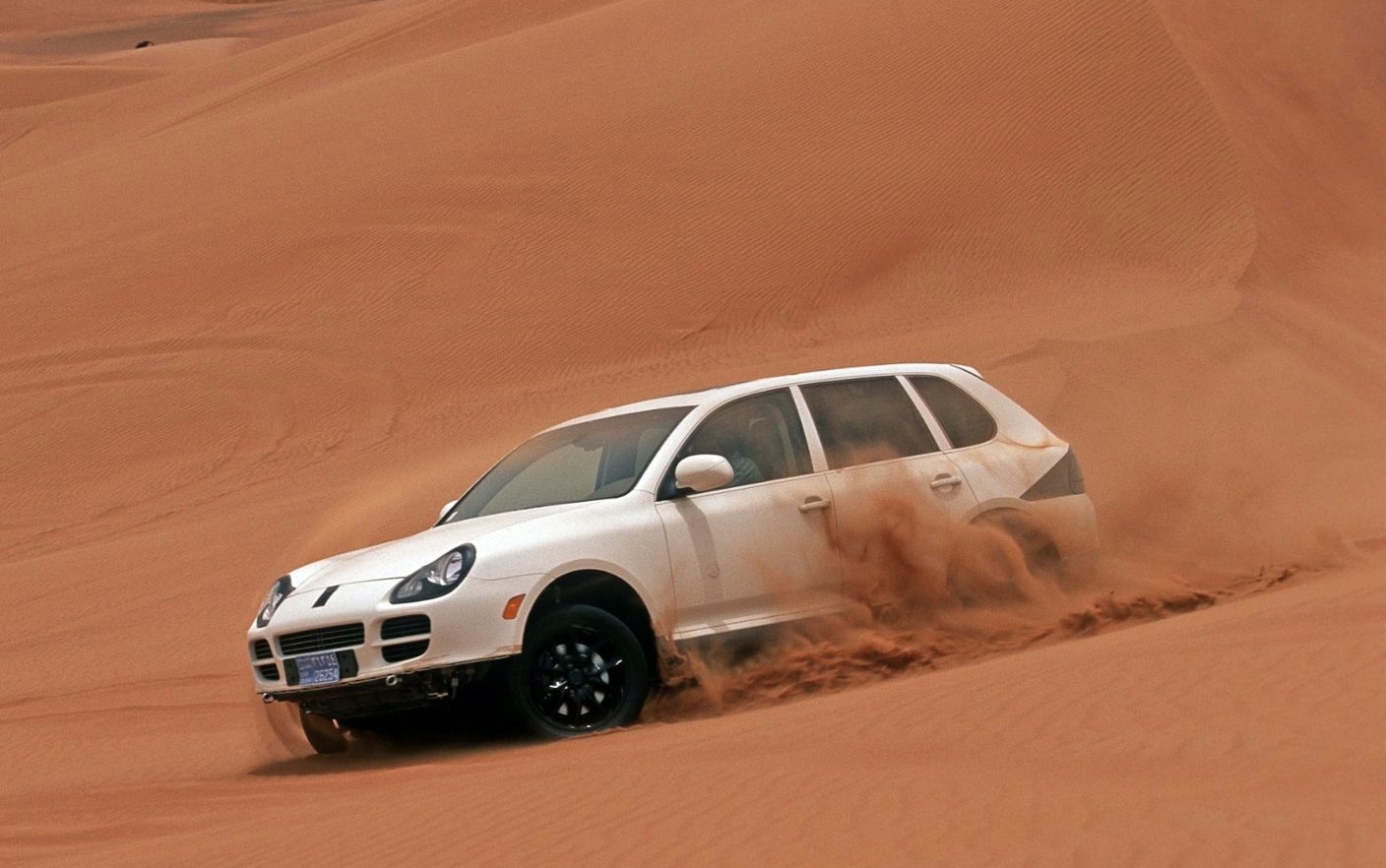 Michael Mauer, who took over Lagaay’s position later, was also pleased that Porsche was willing to invest so much in design and construction. “For me, the Cayenne is about a fundamental question. No matter which type of vehicle concept would have been used to enhance the 911 and Boxster sportscar lines, the step to the third Porsche made a brand out of the product. And the design gave the car, the proportions of which take it as far away from the sportscar as it is possible to go, a Porsche identity that transcends the brand name,” he explained.

This remains evident today in the distinctive shoulder at the back of the original Cayenne – in which Ferdinand Alexander Porsche played a significant design role – as well as the smooth surfaces of the body and the omission of a traditional radiator grille between the headlights.

These classic Porsche characteristics also reduced the significance of the comparatively large air intakes in the front apron. A front-mounted engine requires air for combustion and cooling. And Porsche customers were already used to front air intakes from the sportscars. In this case, though, they are responsible for cooling the brakes.

The biggest design challenge
Mauer remembers the side profile of the car as the most difficult design challenge. The Cayenne was created together with the Volkswagen model, which is why the windscreens and all 4 doors of the two SUVs are identical. “It’s easy to underestimate how much the doors define the side of a car. Behind the rear door, we’ve got maybe another metre, and only a little more at the front, so there is not a lot of room to do very much,” said Mauer, who first worked on the Porsche SUV for the first generation facelift which appeared in 2007. 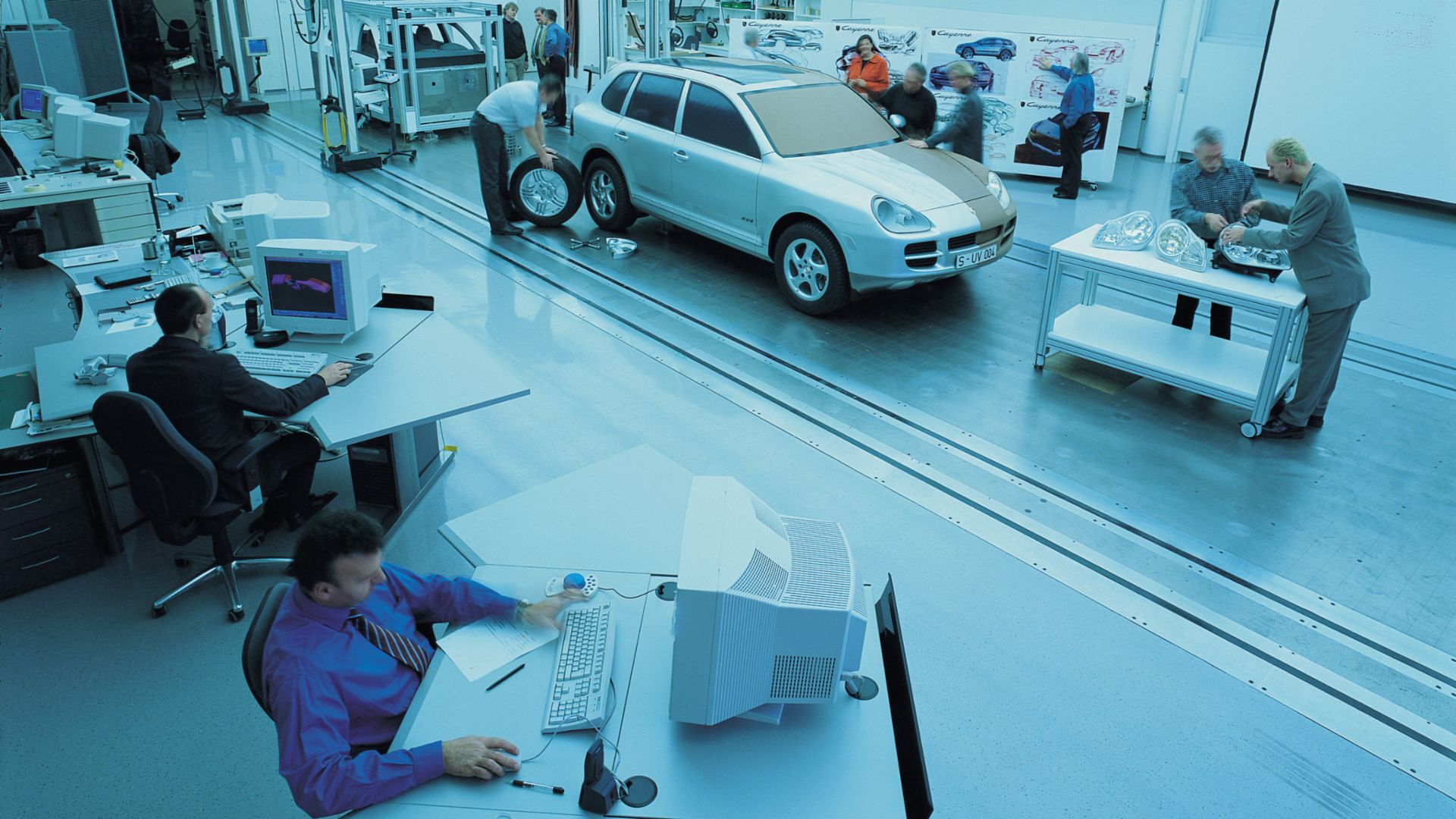 “With the facelift, we gave the whole car more visual sharpness and definition,” he recalled. However, the door issue was still there, along with the difficulty of designing a fastback-style rear – one that would taper diagonally to the rear like a sportscar. At Porsche, this is known as the ‘flyline’.

However, if the doors cannot be changed to prevent the roofline from dropping, there is little space left at the rear to create a flyline that the customer recognises as a characteristic feature. The options that remained to solve this were a more sloping design of the rigid side windows behind the rear doors, and the addition of a spoiler to extend the roof line.

Compromises within
Overall, even from today’s perspective, the first Cayenne with its formal clarity and emphasis on characteristic Porsche elements was a worthy and consistent member of the model range. The interior was, however, strongly influenced by Volkswagen. 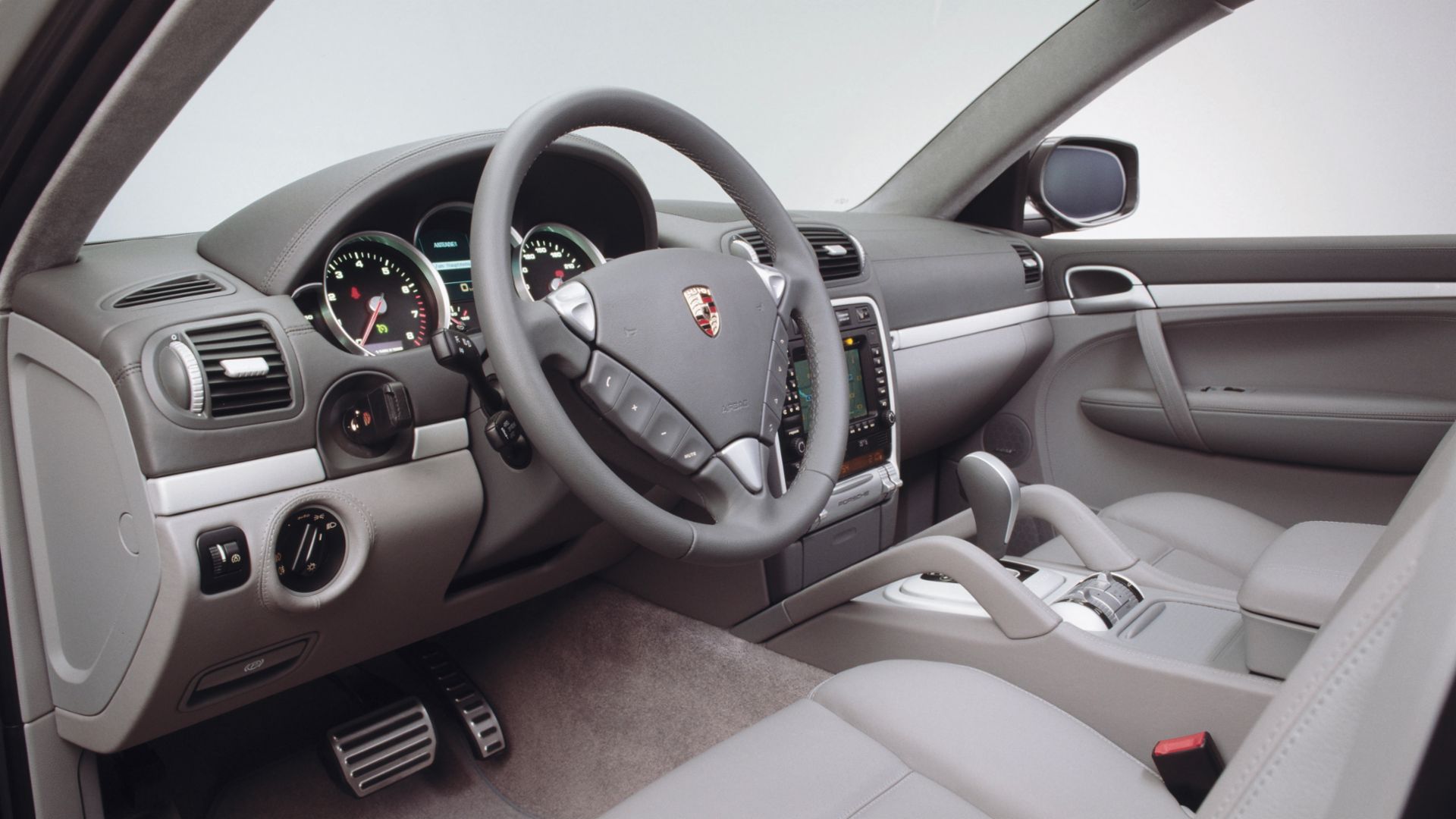 “The interior can hardly deny its kinship with the Touareg,” said Markus Auerbach, Head of Interior Design Style at Porsche. This is where Porsche had to make compromises; one example was on the brand’s customary 5-tube design for the instrument cluster. While five interlinked rings can be seen in front of the steering wheel, the tachometer is not positioned in the middle as is usual for Porsche, but on the left.

To obtain the usual Porsche arrangement, developing a new instrument cluster would have been necessary – an unplanned investment for the first Cayenne. However, Porsche was still able to include a number of characteristic elements: its own 3-spoke steering wheel, hand-grips on the centre console, and the ignition lock that can be found in the same place as in every Porsche – to the left of the steering wheel.

Shortly after its world premiere at the Paris Motor Show in September 2002, the Cayenne became a worldwide success, exceeding sales expectations. Originally, Porsche expected to sell 25,000 units a  year but in the 8 model years of the first generation, 276,652 SUVs were sold – just under 35,000 vehicles per year. By 2020, the one-millionth Cayenne left the factory. In 2021, just over 83,000 units were delivered worldwide, with the US market alone taking around 21,000 units. 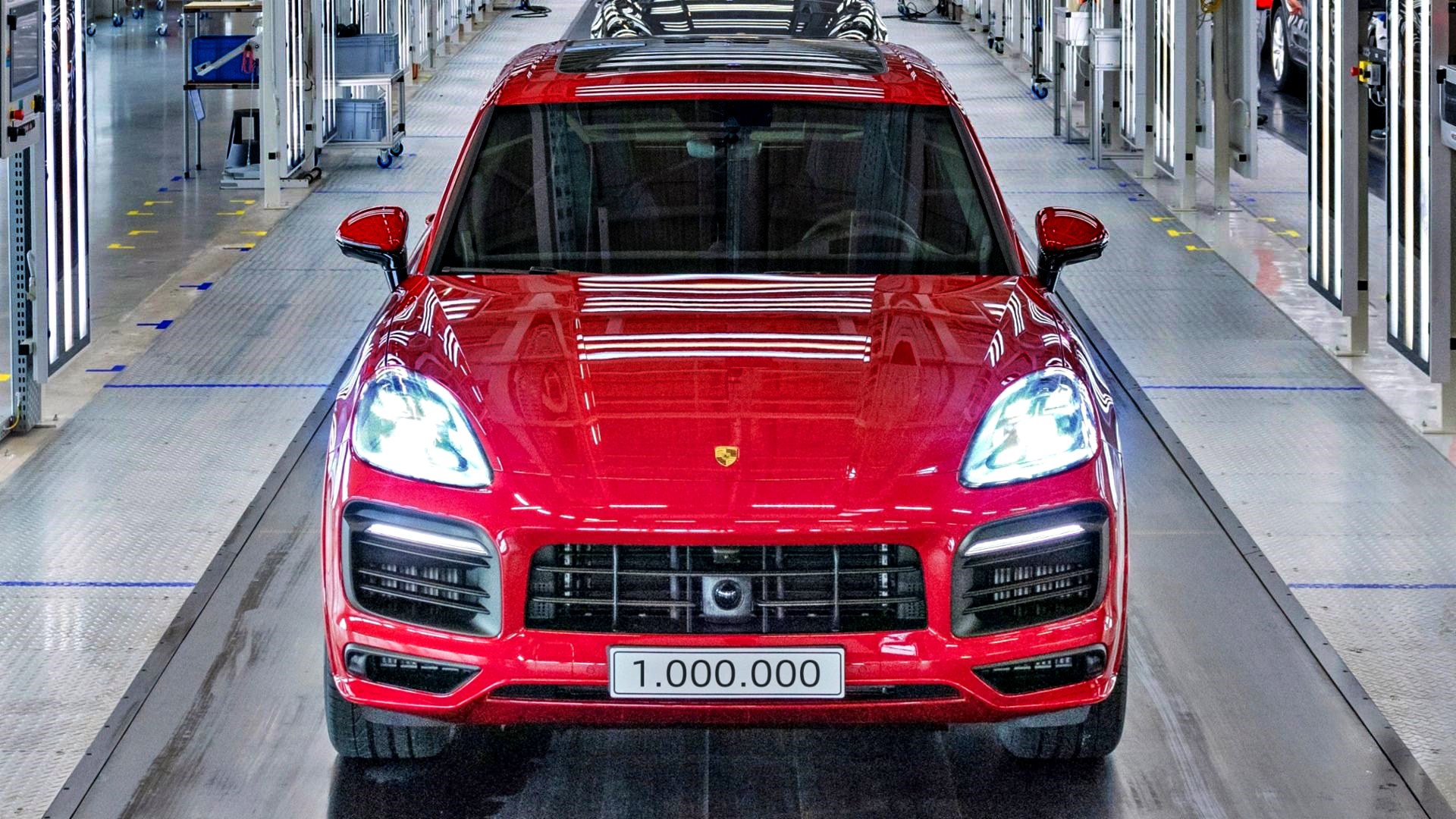