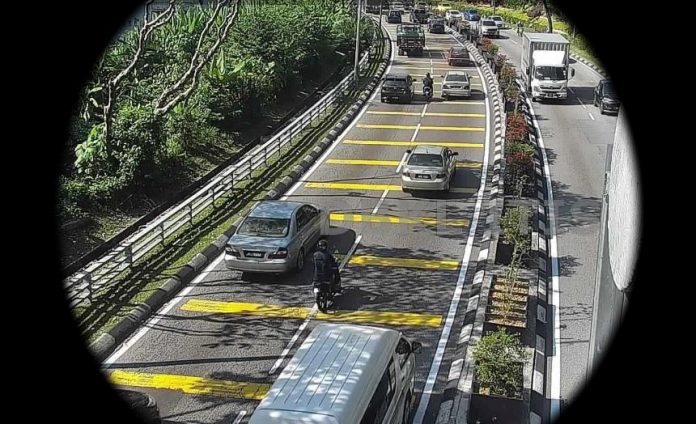 For a long time now, CCTV (close-circuit TV) cameras have been watching major roads around Kuala Lumpur and even along the highways. The thousands of cameras (some of which are also accessible by the public at this website) help the authorities and highway operators to monitor the traffic conditions in real-time so that they are immediately aware if there is a bad jam or accident.

Now, the Federal Territories Ministry has come up with the idea that, besides monitoring the traffic situation, the cameras can also be used to catch road-users committing traffic offences. The ministry will discuss with Dewan Bandaraya KL (DBKL) and the police about applying this approach but before anything can start, there are still legal issues to be examined.

This would relate to whether images captured can be used as evidence to issue summonses and make charges for offences committed. Technically, this should be possible and in fact, camera imagery has long been used by speedtrap cameras as evidence of exceeding speed limits or going through red lights. More recently, the police have used drones to record motorists who have used emergency lanes to beat jams along the highways during the festive season. Presumably, the police will be able to use the images as evidence in court if challenged.

Use of traffic and other surveillance cameras to catch people committing offences is done in other countries. China, for example, has a very extensive network of cameras in its big cities and these use sophisticated recognition technology to identify vehicle numberplates. They also have sophisticated facial recognition technology to identify people moving on the streets. In Europe, the authorities have been using their cameras to catch motorists who are using their mobilephones while driving.

So George Orwell’s 1949 book ‘Nineteen Eighty-Four’ about a society where ‘Big Brother’ is always watching you is actually happening in the 21st century. Orwell’s book wrote about a society where citizens were constantly being watched by ‘telescreens’ to keep them under control. It gained wider publicity when Apple Computers produced a commercial that used the ‘1984’ scenario and showed how one citizen rebelled against the control. It suggested that Apple’s products would ‘free’ people in some way where computers were concerned.

The presence of cameras watching 24 hours a day may seem intrusive but if people are aware and behave themselves rather than think they can easily get away breaking laws, then at least the objective is achieved. It is like the AES speedtrap cameras – motorists know they are there and will stick to the speed limit.

And the good thing about this automated process is that corruption can also be prevented. Without any human interaction, ‘black sheep’ in enforcement agencies would not have an opportunity to try to get bribes for not issuing summonses. The process will be automatic – an offence is confirmed and the summons is sent out, and it is up to the motorist to accept the charge and pay the fine or challenge it in court.