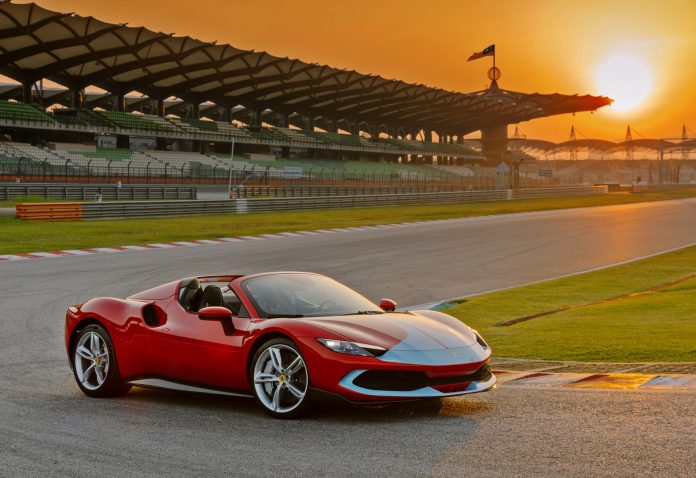 Just a few months after its global debut, the Ferrari 296 GTS – the ‘topless’ version of the 296 GTB – is in Malaysia, with its Southeast Asian premiere held at the Sepang International Circuit recently. Apart from the allure of being a berlinetta spider, this is the first ever Ferrari spider with a rear-wheel drive-only PHEV (plug-in hybrid electric vehicle) architecture in which the engine is integrated with a rear-mounted electric motor. The hybrid drivetrain is derived from Ferrari’s Formula 1 racing cars and another example of racing technology being transferred to road cars. 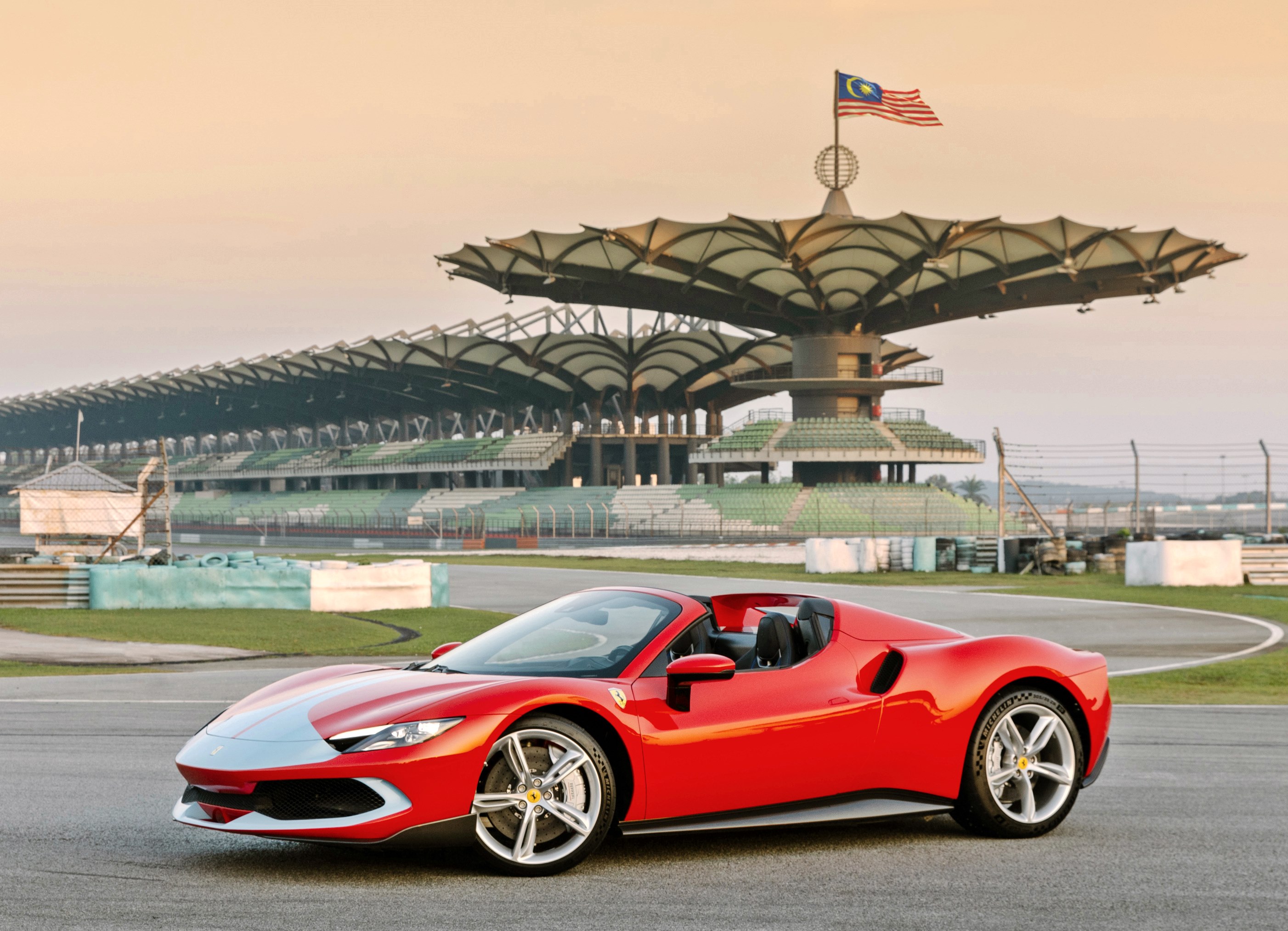 Plug-in hybrid powertrain
The 296 GTS uses the new 663 ps 120° 2992 cc V6 coupled with an electric motor capable of delivering a further 167 ps, the same unit found in the 296 GTB. With the additional power generated by the electric motor, total system output from the powertrain is 830 ps/740 Nm, of which 165 ps comes from the electric motor. This allows it to achieve a new specific power output record for a production car of 221 ps/litre. 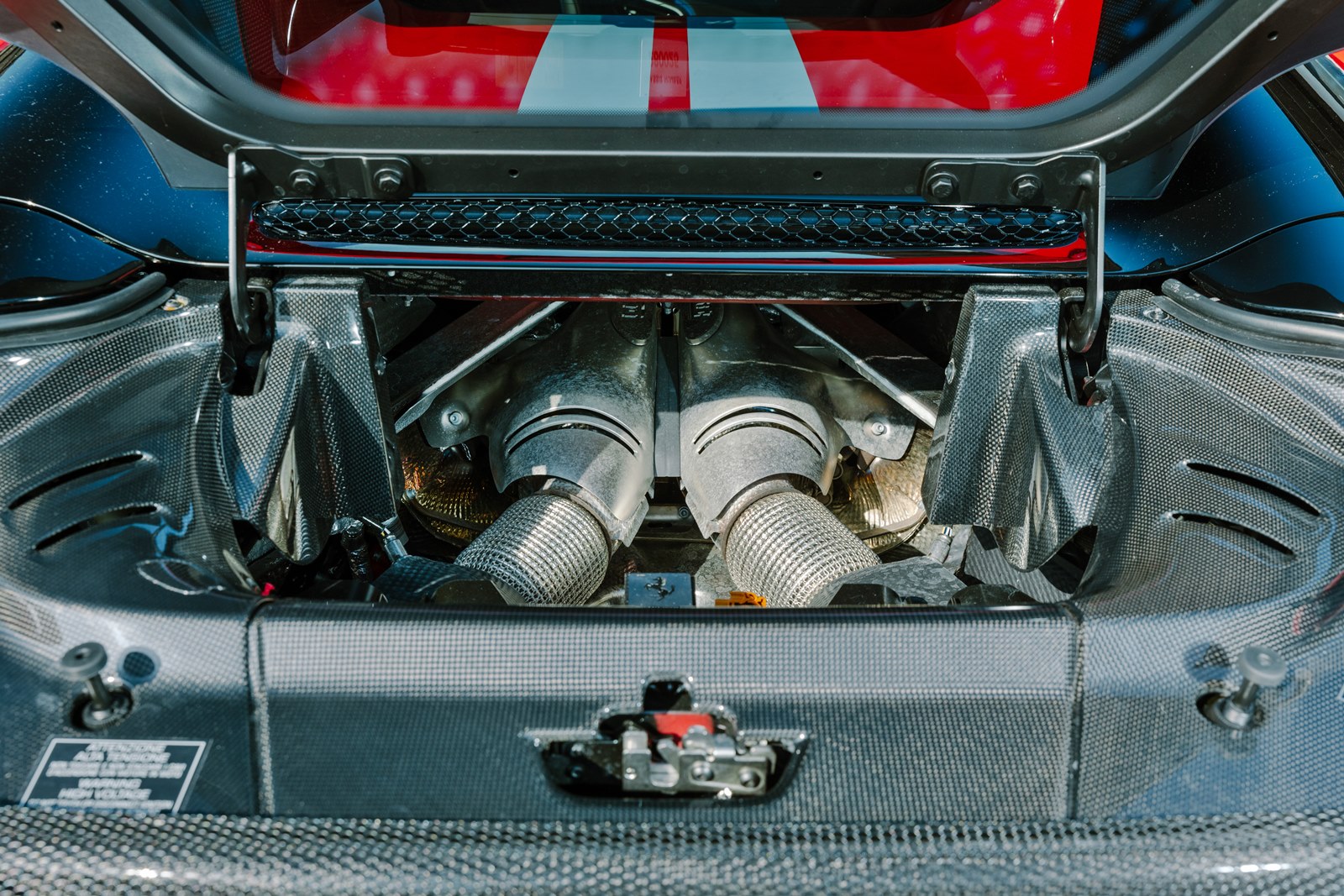 Sound-wise, the V6 engine rewrites the rulebook by harmoniously combining two characteristics that are normally diametrically opposed: the force of the turbos and the harmony of the high-frequency notes of a naturally-aspirated V12. Even at low revs, inside the cabin, the soundtrack features the pure V12 orders of harmonics; at higher revs, there is that typical high-frequency treble. This Ferrari’s soundtrack matches its performance, creating a sense of unprecedented involvement even with the top down. 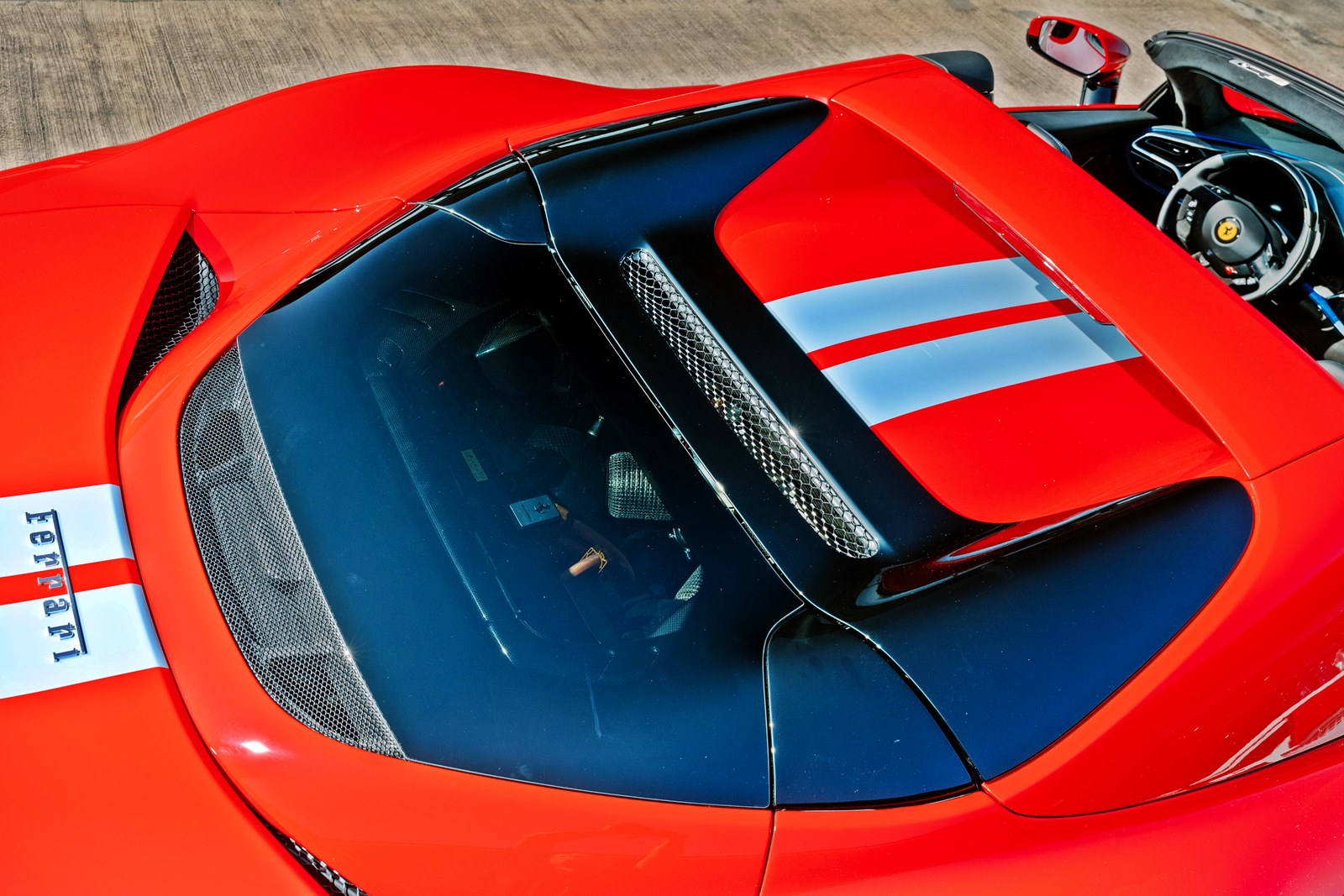 Power with efficiency
Being a PHEV gives the 296 GTS the best of both worlds – lighting quick performance and also zero emissions motoring which can be up to 25 kms in all-electric eDrive mode. As was the case with the SF90 Stradale, customers who want to take the car further, especially on the track, can specify the Assetto Fiorano package which includes lightweight features and aero modifications.

With the RHT (retractable hard top) in use, the silhouette remains very similar to that of the 296 GTB. When it is stowed away, a sleek, sporty design is created. The lightweight RHT takes 14 seconds to retract or deploy at speeds of up to 45 km/h.

The need to stow the RHT inside the engine compartment required the creation of a new tonneau cover design. As a result, the folding roof splits into two sections that fold flush over the front of the engine, thus maintaining the engine bay’s thermal dissipation characteristics and the balance of the overall design. This also allowed the designers to introduce a window in the rear section of the engine cover through which the new V6 is clearly visible.

When the top is retracted, the cabin and the rear deck are separated by a height-adjustable glass rear screen which guarantees optimal passenger comfort even at high speeds. The separation line between the car’s body and the roof is above the B post. 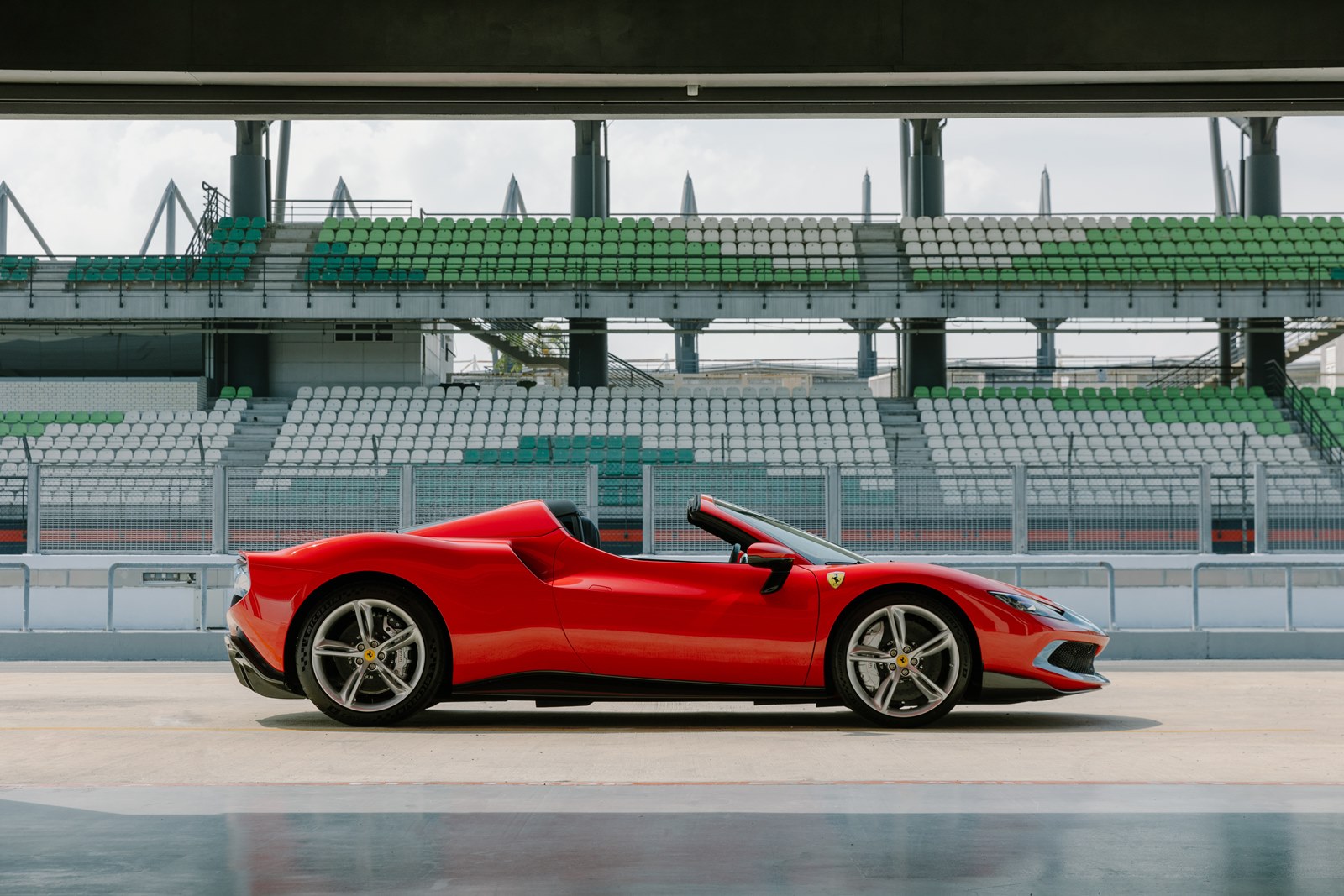 Redesigning the 296 GTS’s engine bay to seamlessly integrate the RHT means that the engine has the same rich tone and intensity as the 296 GTB when the roof is up. The exhaust resonator system (Hot-Tube) has been optimised for the new cockpit geometry. The dropping of the top creates a direct, completely unobstructed connection between the cockpit and the sound produced by the single tailpipe exhaust line.

Radical aerodynamic solutions
The 296 GTS adopts several radical and innovative solutions in aerodynamics. The aero choices have turned the active aero paradigm, introduced from the 458 Speciale onwards, on its head. On the 296 GTS, an active device is being used not to manage drag but to generate extra downforce. The LaFerrari-inspired active spoiler integrated into the rear bumper allows the 296 GTS to generate a high level of rear downforce when required – up to a maximum of 360 kgs at 250 km/h. 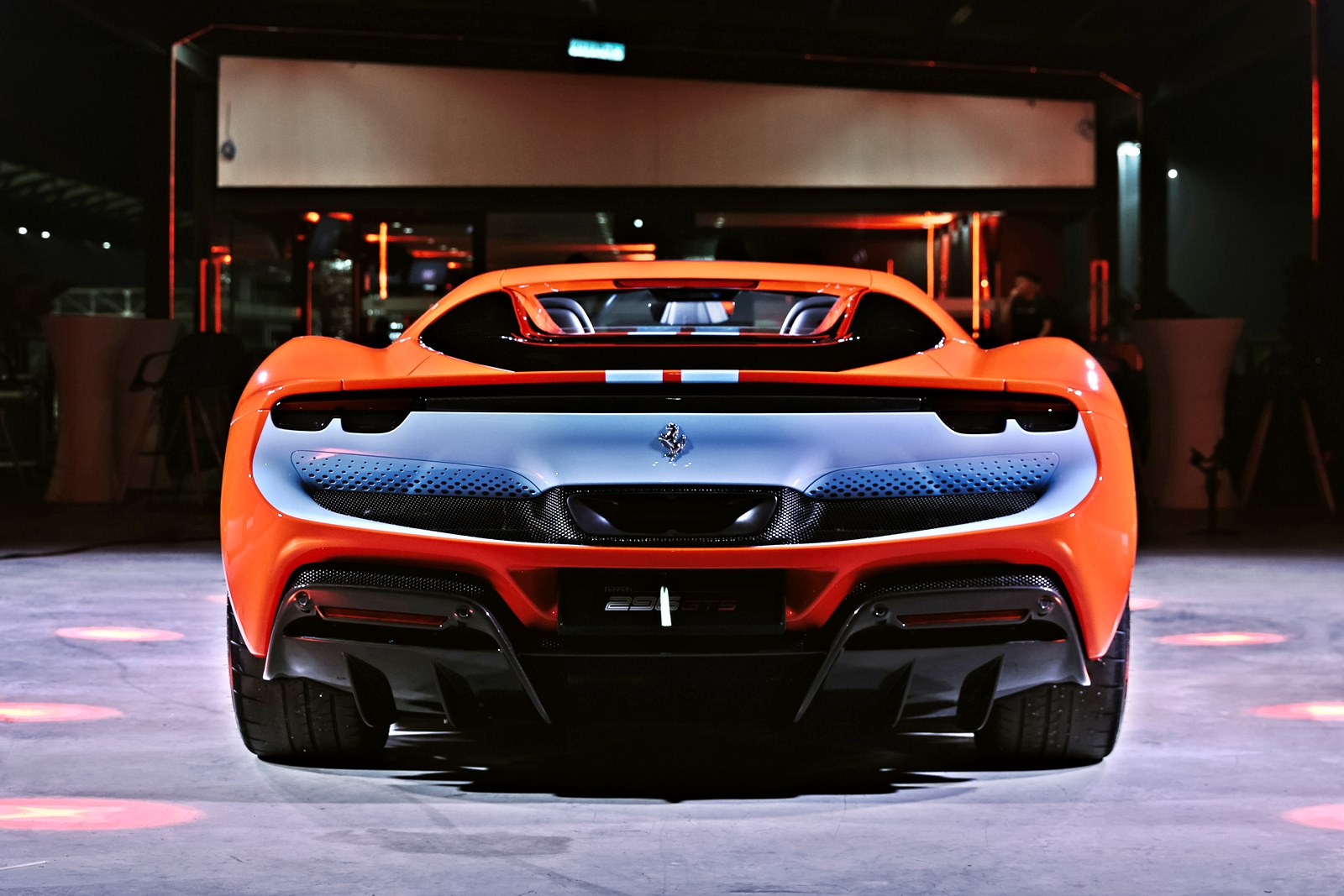 The aero development work done on the 296 GTS means that even in low-drag configuration, the car can deliver more downforce than previous applications. In high-downforce configuration, there is an additional 100 kgs in downforce, thanks to the active spoiler.

The brake cooling system was developed around the Aero calipers that debuted on the SF90 Stradale, with ventilation ducts integrated into their castings. This cooling concept requires a dedicated duct to correctly channel cool air coming in through the air intakes on the front bumper through the wheelarch. In the case of the 296 GTS, the intake has been integrated into the headlight design. 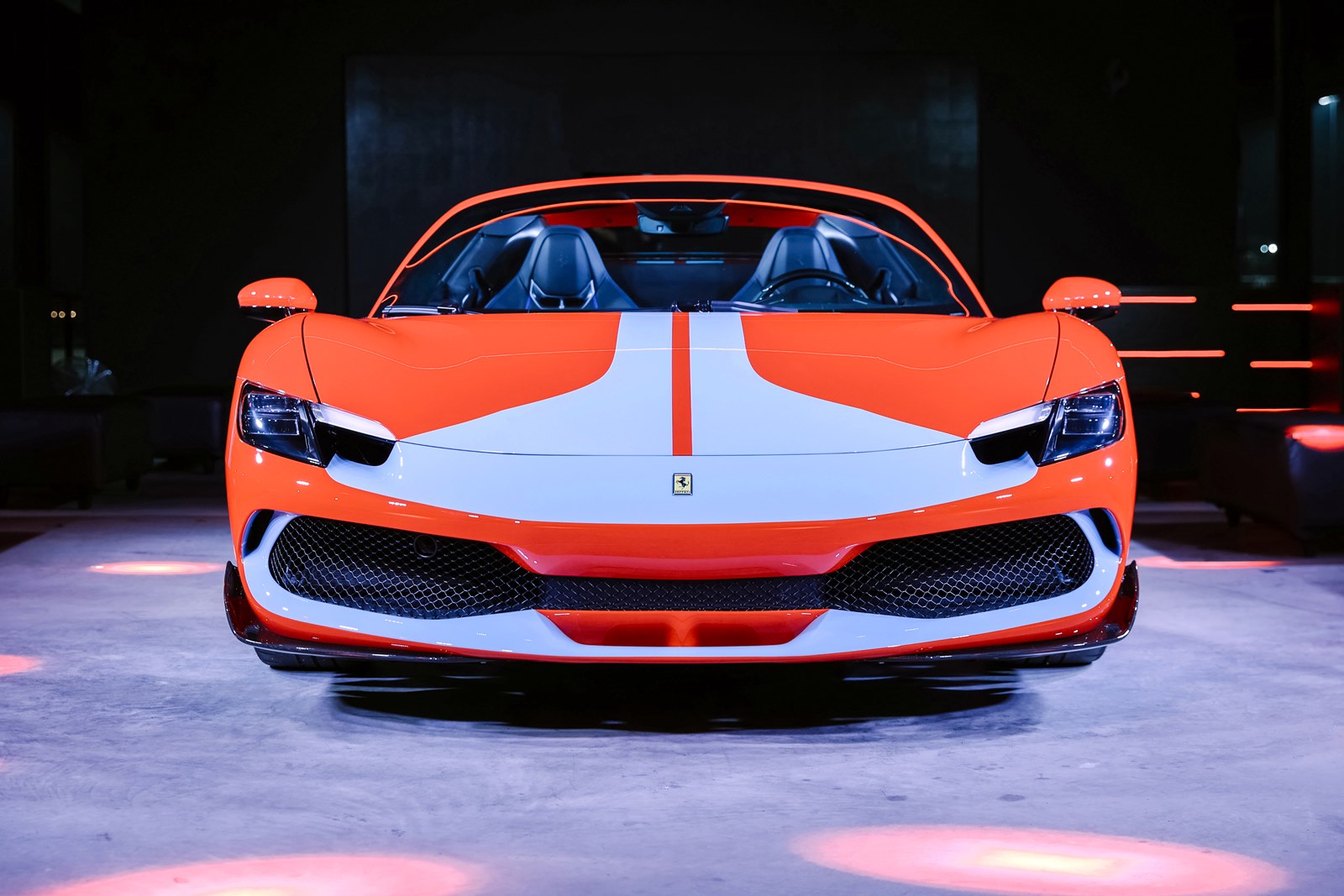 This made it possible to push the design of the car’s underbody to new extremes, increasing the cooling capacity of the underbody without having to adopt any active front aero mechanisms. The signature aerodynamic element at the front of the 296 GTS is the ‘tea-tray’, a concept widely applied to single-seater racing cars. The rear surface of the bumper works in synergy with the upper surface of the tea tray to create a high overpressure field, which counteracts the depression field that characterises the underbody.

High levels of driver engagement
The car’s dynamic development focused around boosting pure performance and delivering class-leading levels of driver engagement. The targets were achieved by honing the architecture and keeping all the main vehicle components as compact as possible, as well as managing energy flows and their integration with the car’s vehicle dynamic controls. 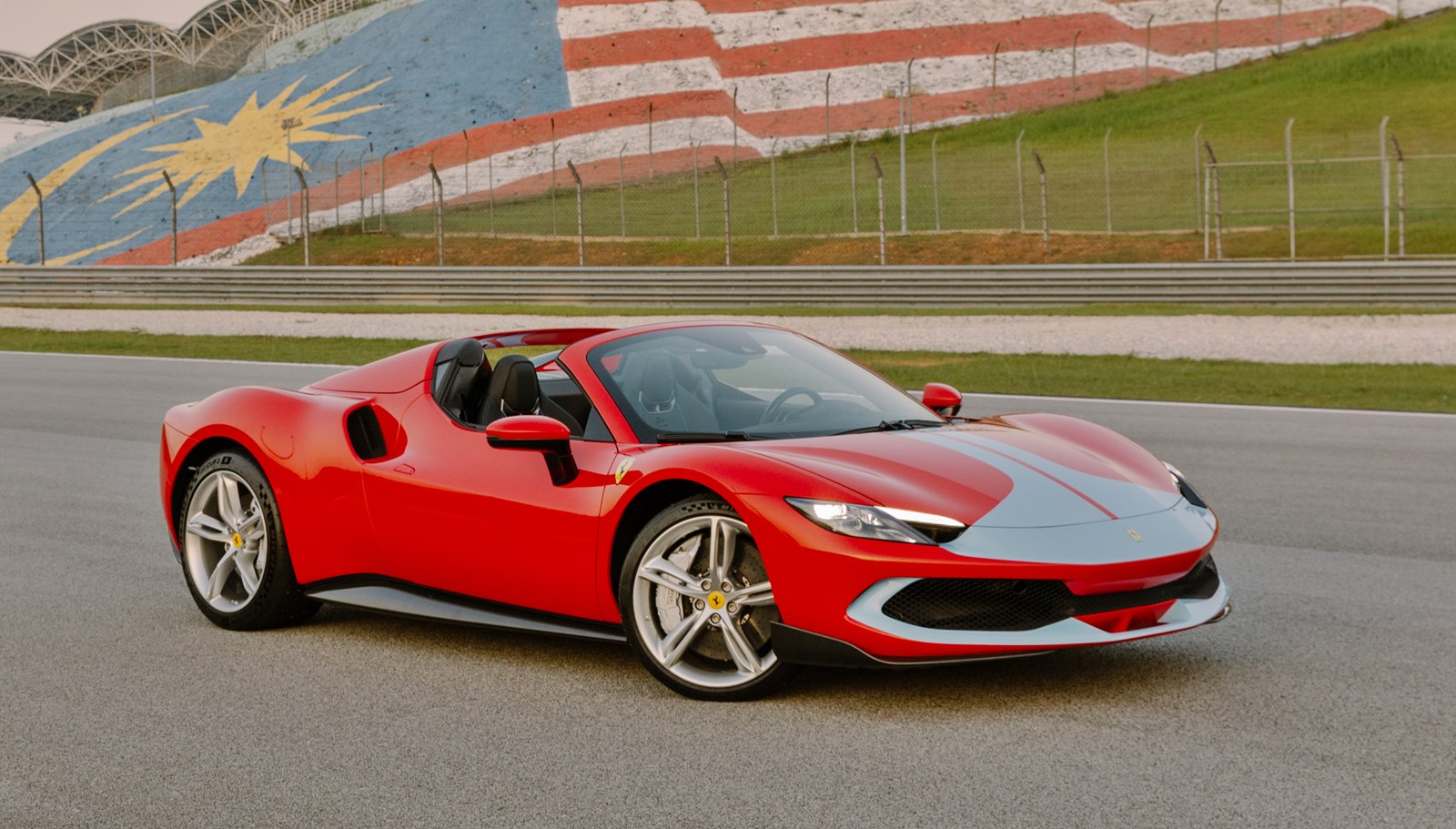 The 296 GTB’s chassis was redesigned and optimised to improve torsional rigidity and bending stiffness compared to previous spider applications. From a chassis perspective, at 2600mm, the wheelbase is 50 mm shorter than previous Ferrari mid-rear-engined berlinettas to the benefit of the car’s dynamic agility. Other solutions that enhance the car’s handling and performance include the brake-by-wire system, the ‘Aero’ brake callipers, electric power steering, the rear active aero device and SCM-Frs magnetorheological dampers.

Meticulous attention was paid to reducing weight to ensure the car’s balance and delicacy of handling. The added weight of the hybrid system was offset by a number of different solutions, including the new V6 which weighs 30 kgs less than the V8 unit used on previous berlinettas.

Digital interface for cockpit
The 296 GTS’s cockpit was developed around the new concept of an entirely digital interface. This interior layout draws on the latter’s stylistic coherence for its forms. While with the SF90 Stradale the designers wanted to highlight the presence of the advanced technology and underscore a clear break with the past, in the case of the 296 GTS, the idea was to clothe that technology to sophisticated effect. 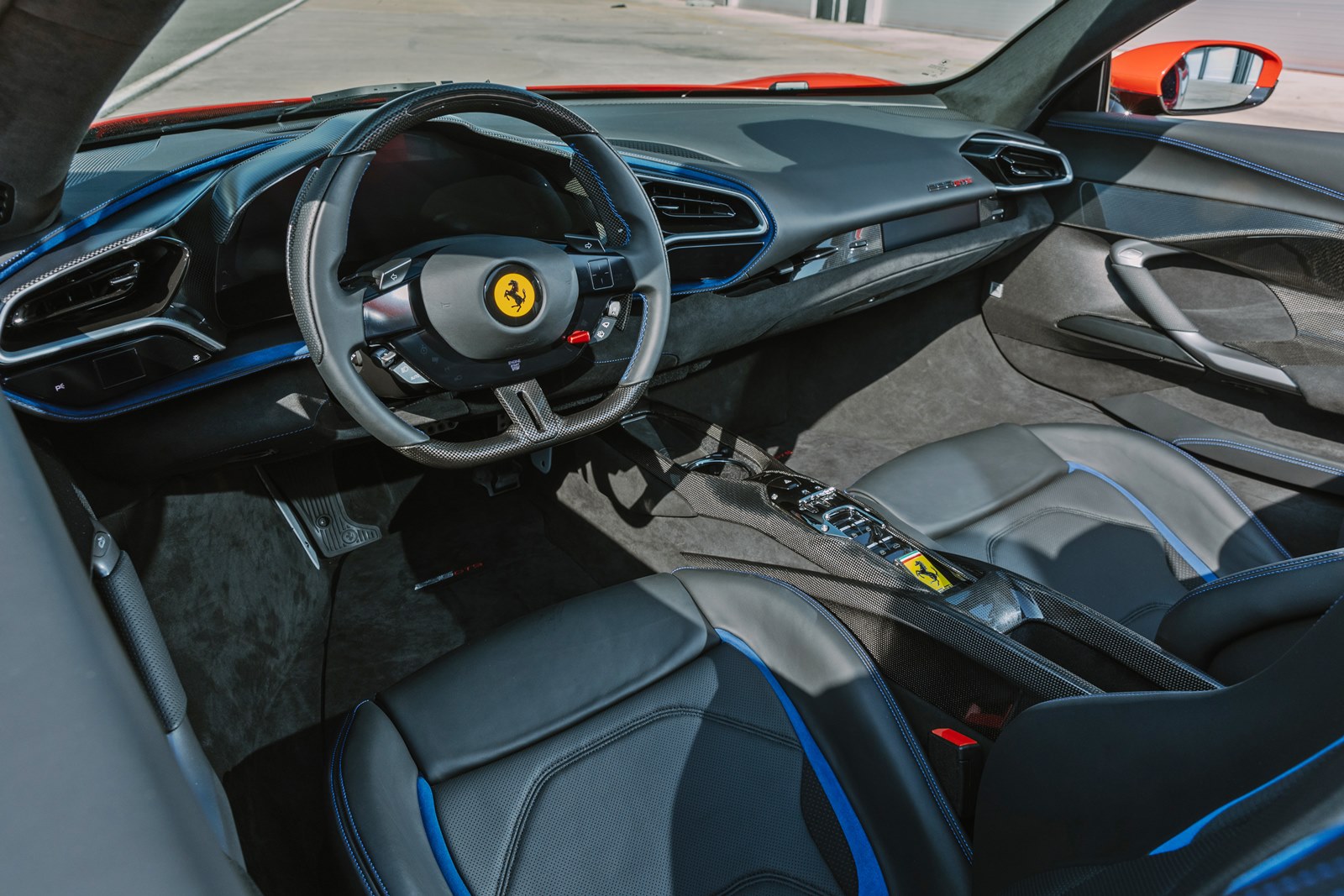 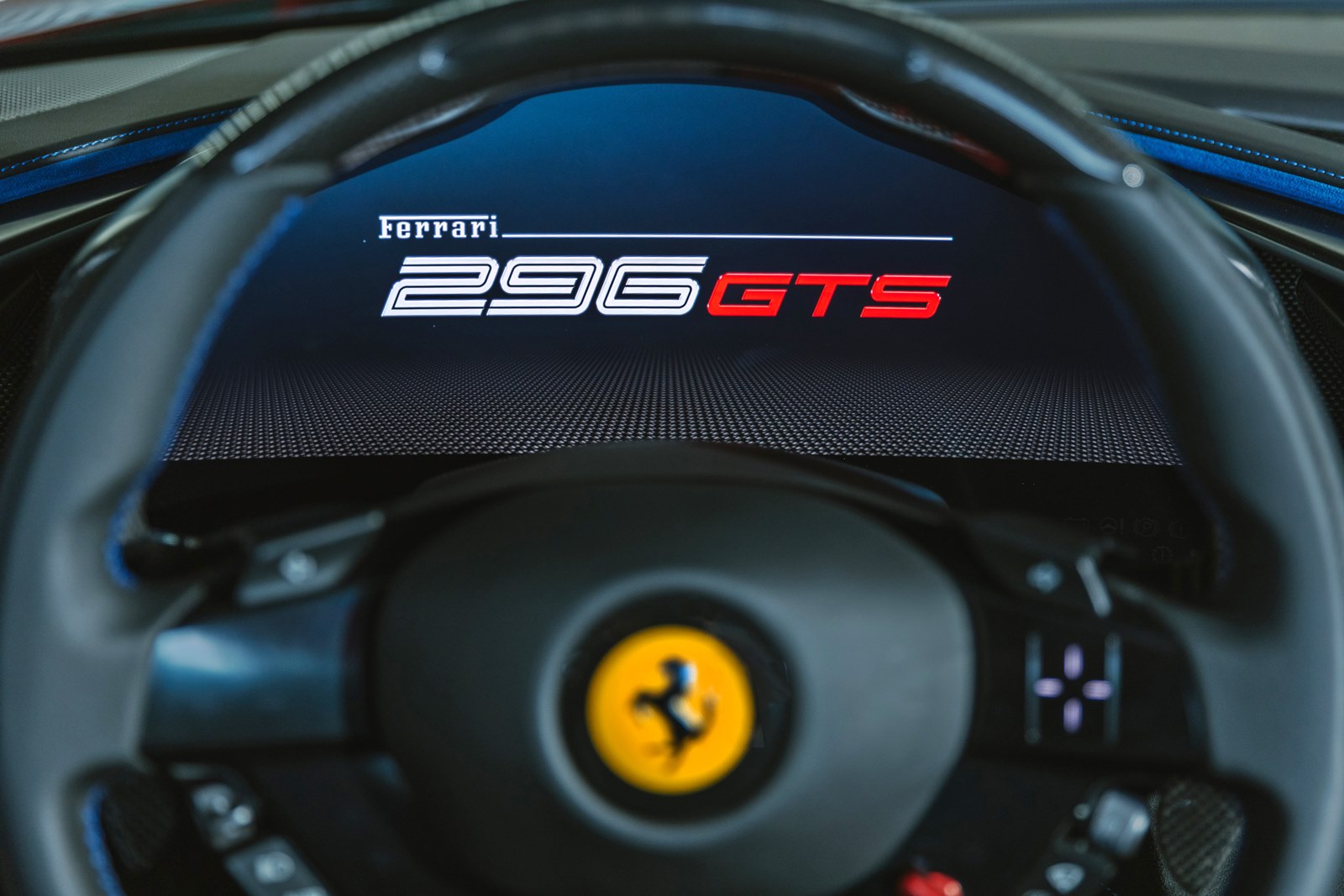 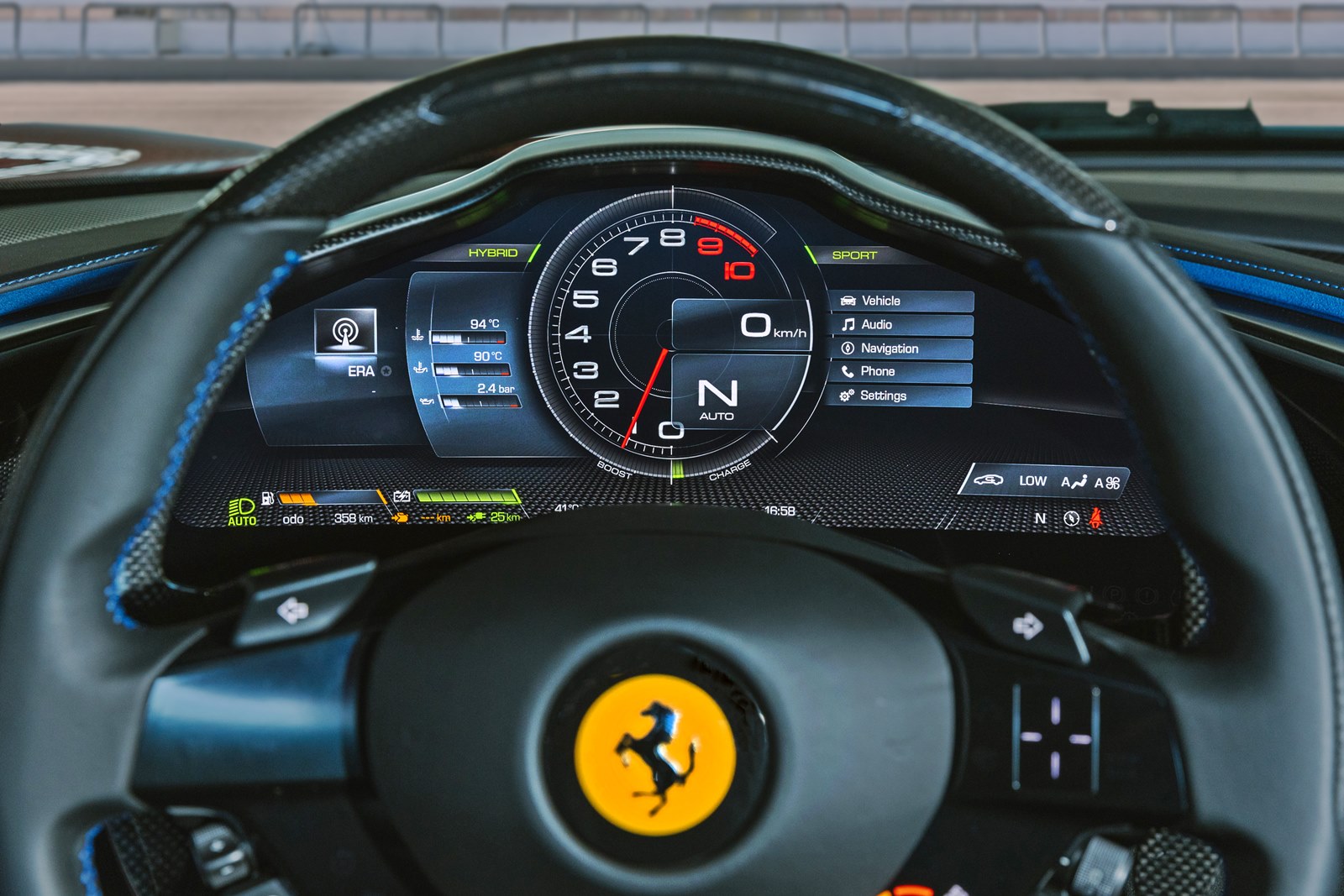 The cabin has the concept of the formal purity of the functional elements. When the engine is off, the onboard instruments go black, underscoring the minimalist look of the cabin. Exclusive Italian leather trim to the seats and trim is further enhanced by the noble technical materials used on the functional components. Aerodynamic flaps have been integrated into the rear trim structure to reduce buffeting and increase comfort in open-top driving. 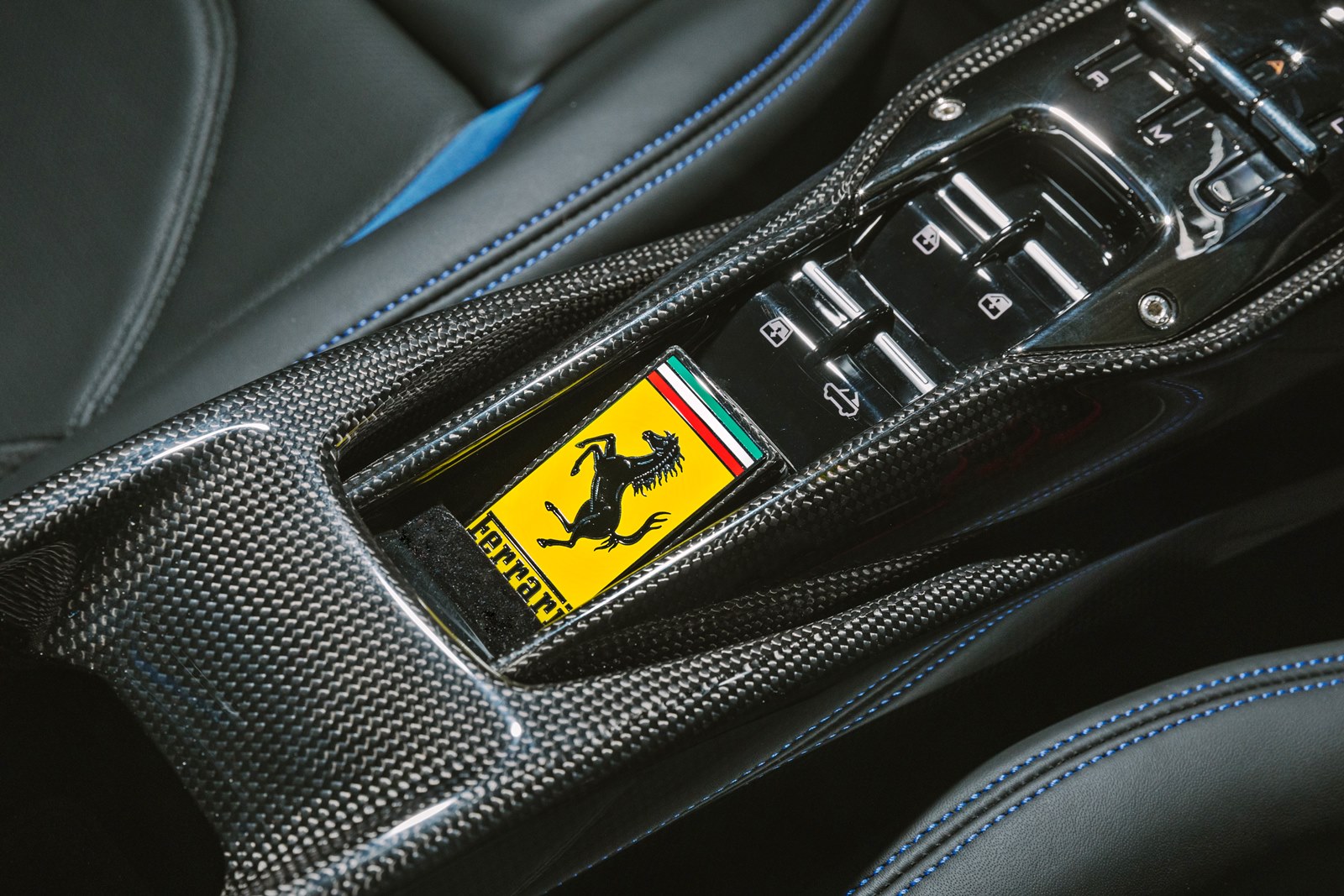 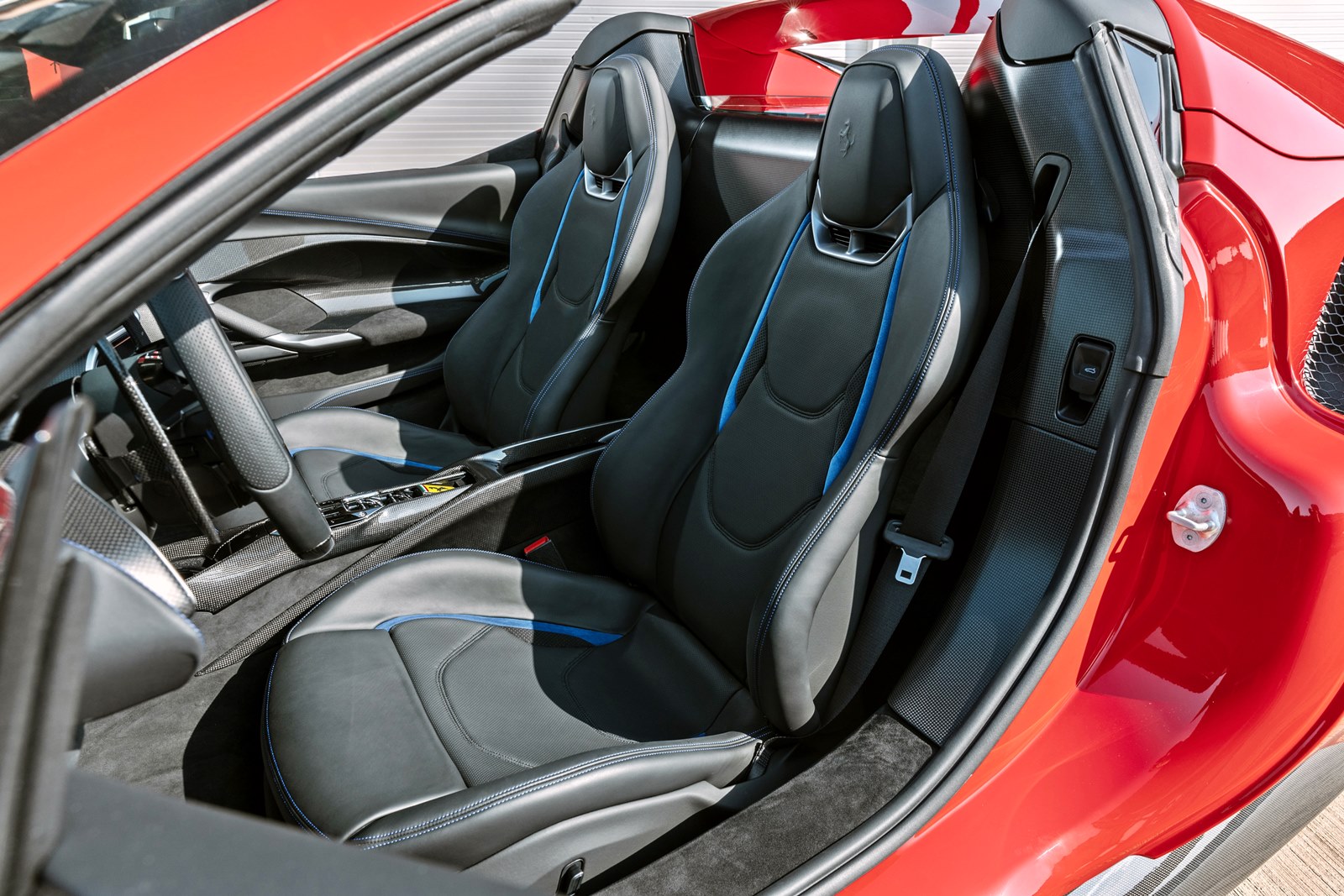 The sculptural door panel is a seamless continuation of the dashboard in terms of both materials and colour. On the central medallion, the styling cue is a deep lozenge-shaped scoop, a three-dimensional element. This type of architecture makes the entire door panel look extremely light and integrates the theme that connects it to the rear trim. 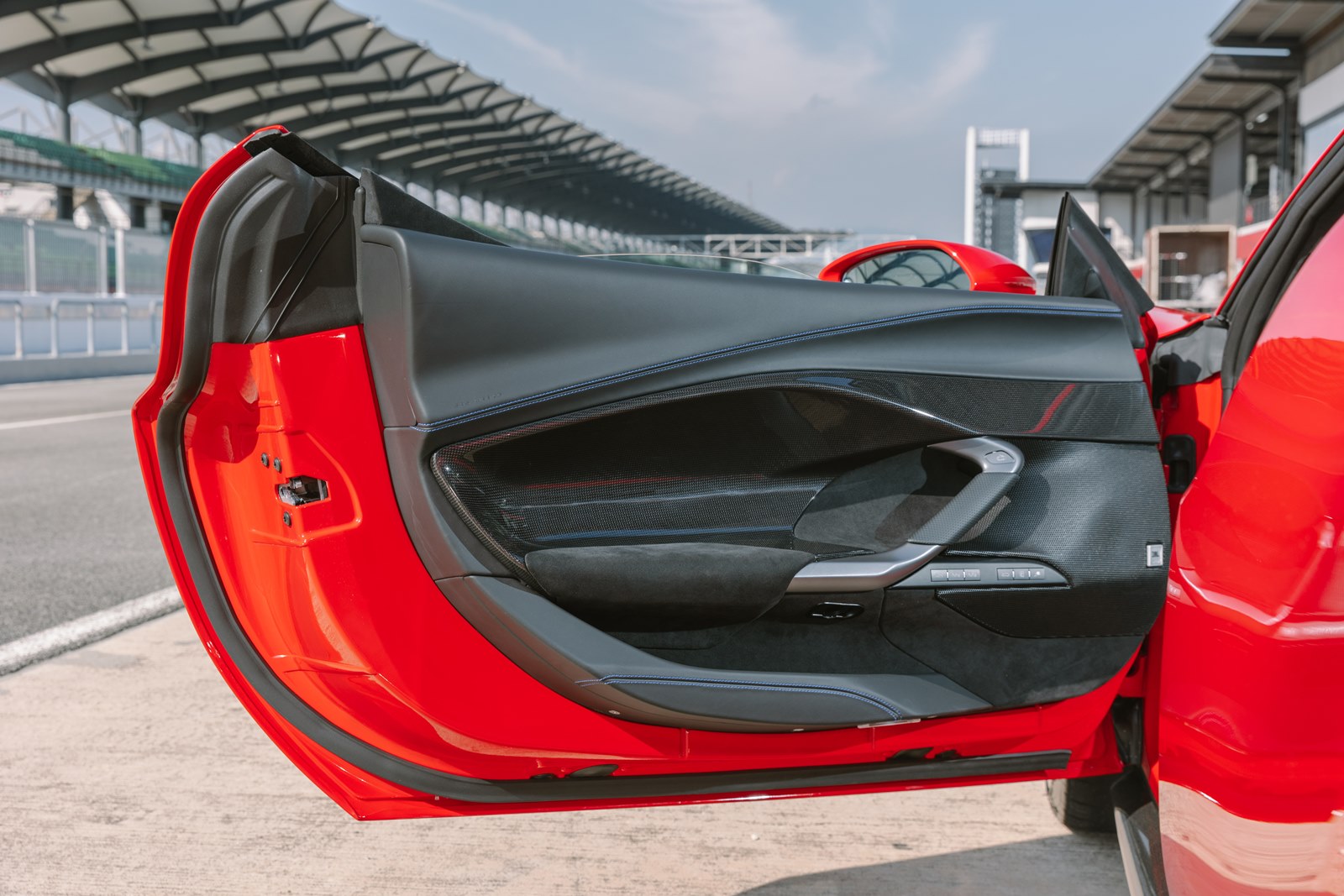 “The convertible version of Ferrari’s first 6-cylinder road-going car takes driving thrills to new heights. Subtly restyled to accommodate the open top, the Ferrari 296 GTS adds a sense of freedom to the fun of every journey. At the wheel of the 296 GTS, you get to enjoy the result of Ferrari’s exploration into electric technology and also have the ability to make the most of the weather and your mood, maximising driving pleasure,” said Damien Woo, General Manager, Ferrari Malaysia, Naza Italia Sdn Bhd.

With Ferrari’s 7-Year Genuine Maintenance programme, the 296 GTS is priced from RM1,448,000 (before duties, customization options, taxes and insurance) from Ferrari Malaysia. 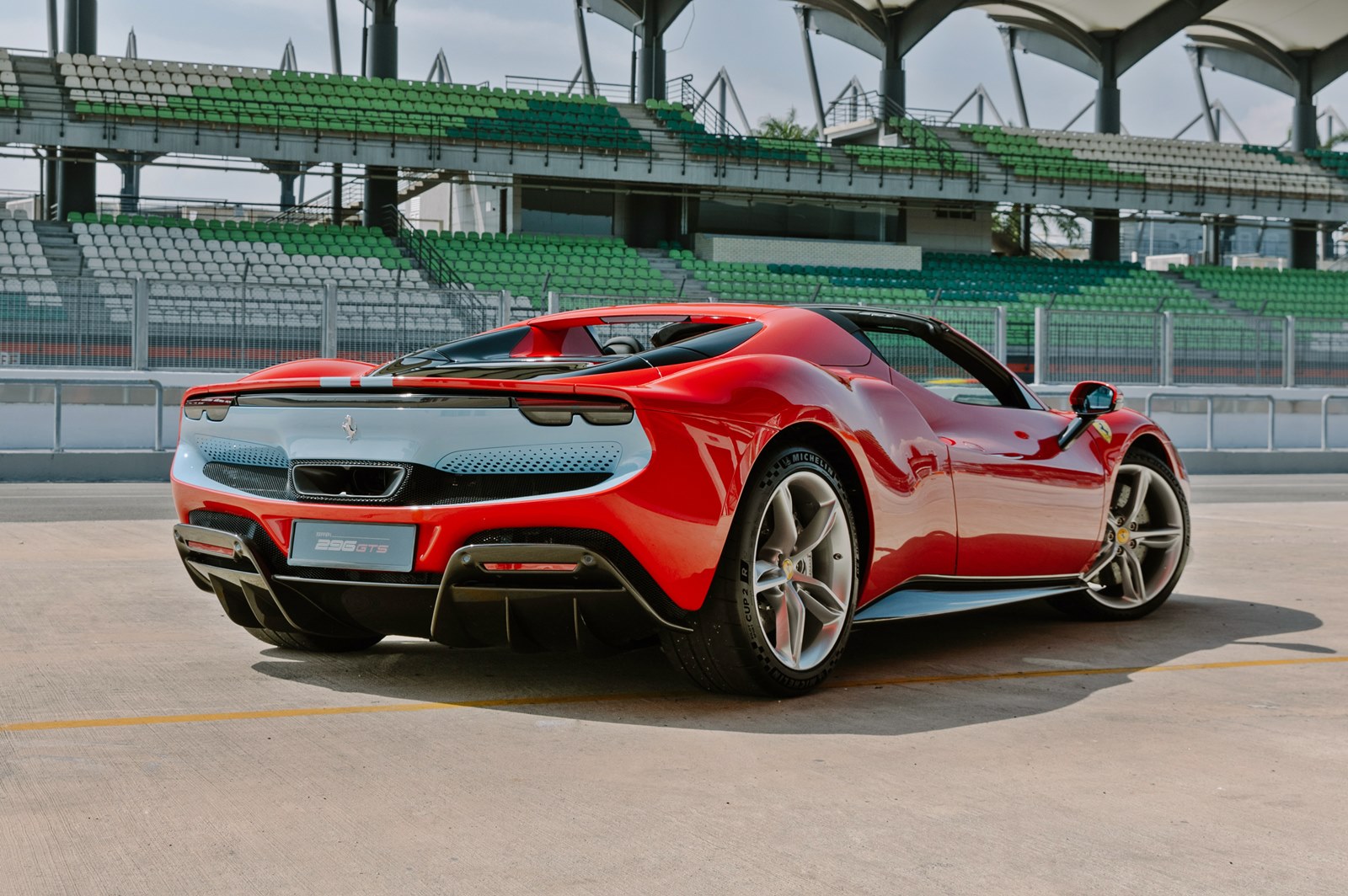