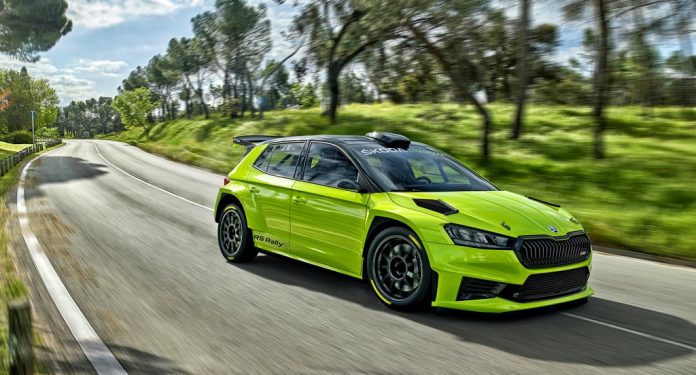 While Skoda does not compete in the top class of the World Rally Championship, it has been very successful in other segments of the Rally Pyramid, notably in the WRC2 category. Its FABIA is among the most successful rallycars in the world with the rally versions – FABIA Rally2 and FABIA Rally2 evo – having dominated the category from 2015 to 2022. The more than 450 units built by Skoda Motorsport collected 1,710 victories by April 2022, including 4 victories in the legendary Monte Carlo Rally. 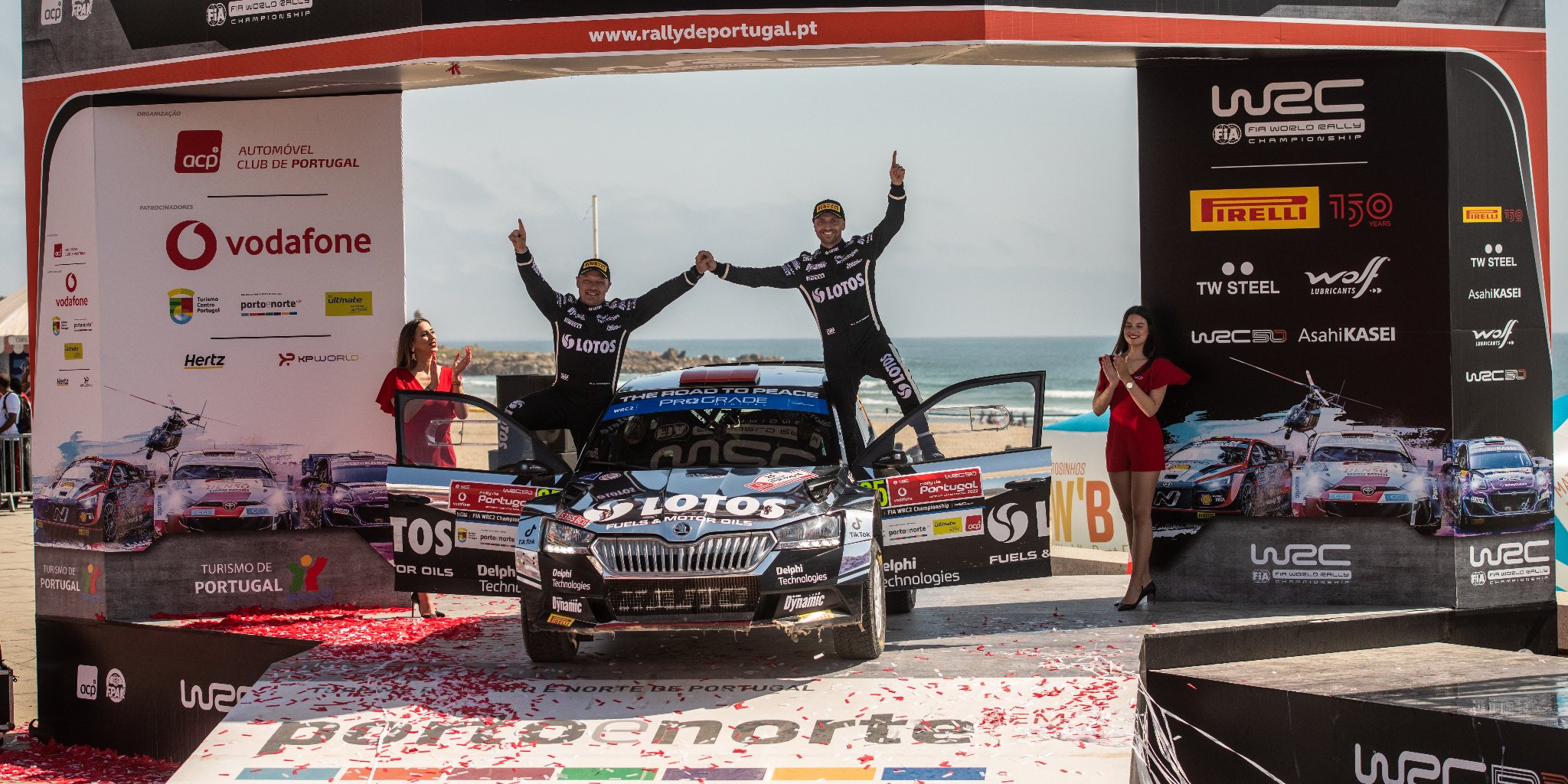 Newly developed engine
When it was time to move on to a new generation, the development team at Skoda Motorsport has much experience to draw upon. With the new FABIA RS Rally2, customer teams will have a much more competitive car with a new engine, improved handling, better electronics and enhanced safety features. The new engine is a 1.6-litre turbocharged unit based on the 2.0 TSI from the Volkswagen Group EA888 engine family (used in the RS models).

The output of 289 bhp/430 Nm goes to all four wheels via a sequential 5-speed transmission. Although there is a mechanical clutch, it is only used for starting, parking or when driving slowly. For optimum acceleration on tight, winding rally stages, the FABIA RS Rally2 has a relatively short gear ratio, offering a top speed of around 200 km/h. 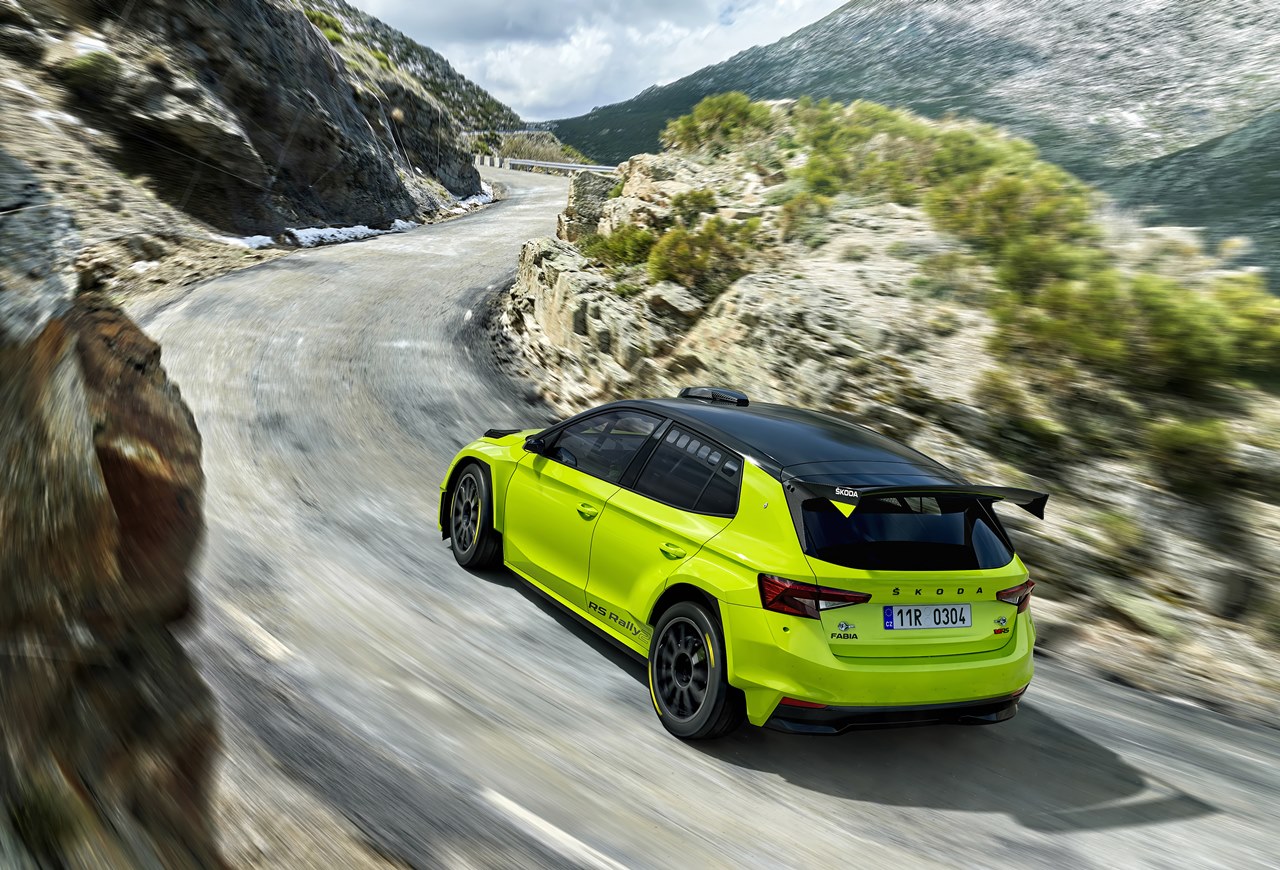 To prepare the new FABIA RS Rally2 for action on the rally track, test-drivers subjected prototypes to extensive tests on asphalt, gravel and snow for almost a year. This included trials in the Czech Republic, France, Italy, Croatia, Germany, Belgium and Spain, as well as under extreme winter conditions in northern Finland since mid-2021.

The gruelling test programme validated the special braking system and precisely balanced chassis. In addition, the electronics and controls were also tested to meet the demanding conditions during a rally. Also tested was the special 82.5-litre fuel tank and shock-resistant rubber which meets the FIA’s regulations. Additional protection is provided by a carbon/kevlar composite cover and an absorbent layer on the underside. 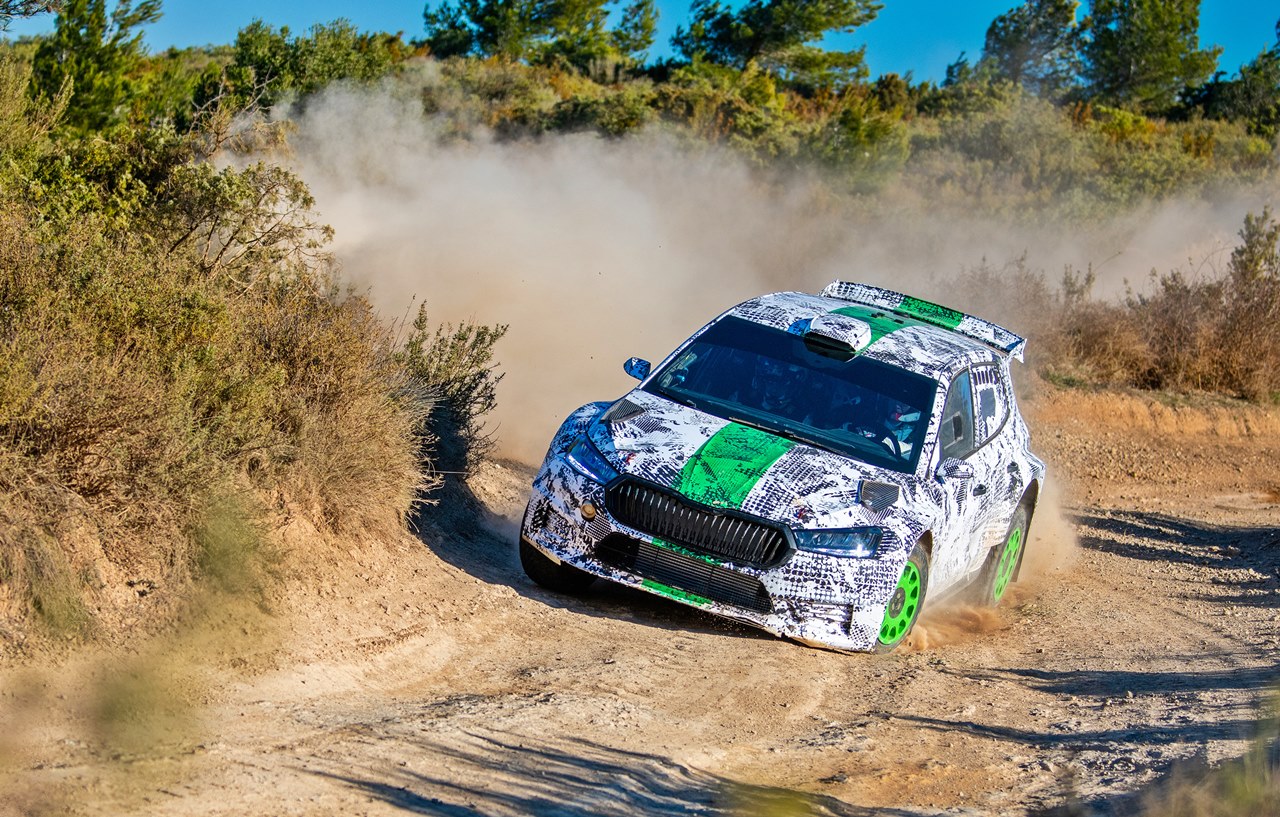 Sustainable fuel requirement
Throughout the 2022 season, 100% sustainable petrol will be used by competing cars in the WRC. This is based on modern raw materials and high-purity renewable components. The bio-fuels are derived from biological waste and synthetic e fuels. These are produced using renewable energies that enable electrolysis from ‘green’ hydrogen as well as CO2, which is extracted from the air and industrial processes. The 100% renewable petrol is then mixed in a laboratory without any fossil-fuel components.

Some of the components used in rally vehicles differ significantly from their counterparts in production vehicles. Instead of having up to nine airbags and numerous electronic assistance systems like those found in the production FABIA, the new FABIA RS Rally2 relies purely on mechanics in many aspects. It also features specialised components, such as a roll cage and specially protected fuel tank.

Also unlike the production version sold to the public, the rally version only uses sensors for engine management and displaying the brake pressure, steering wheel position and fuel. The sensors merely provide information; with the production model, they perform any control functions. Only the engine control unit uses sensor data to ensure that it functions optimally in all driving modes and various weather conditions. 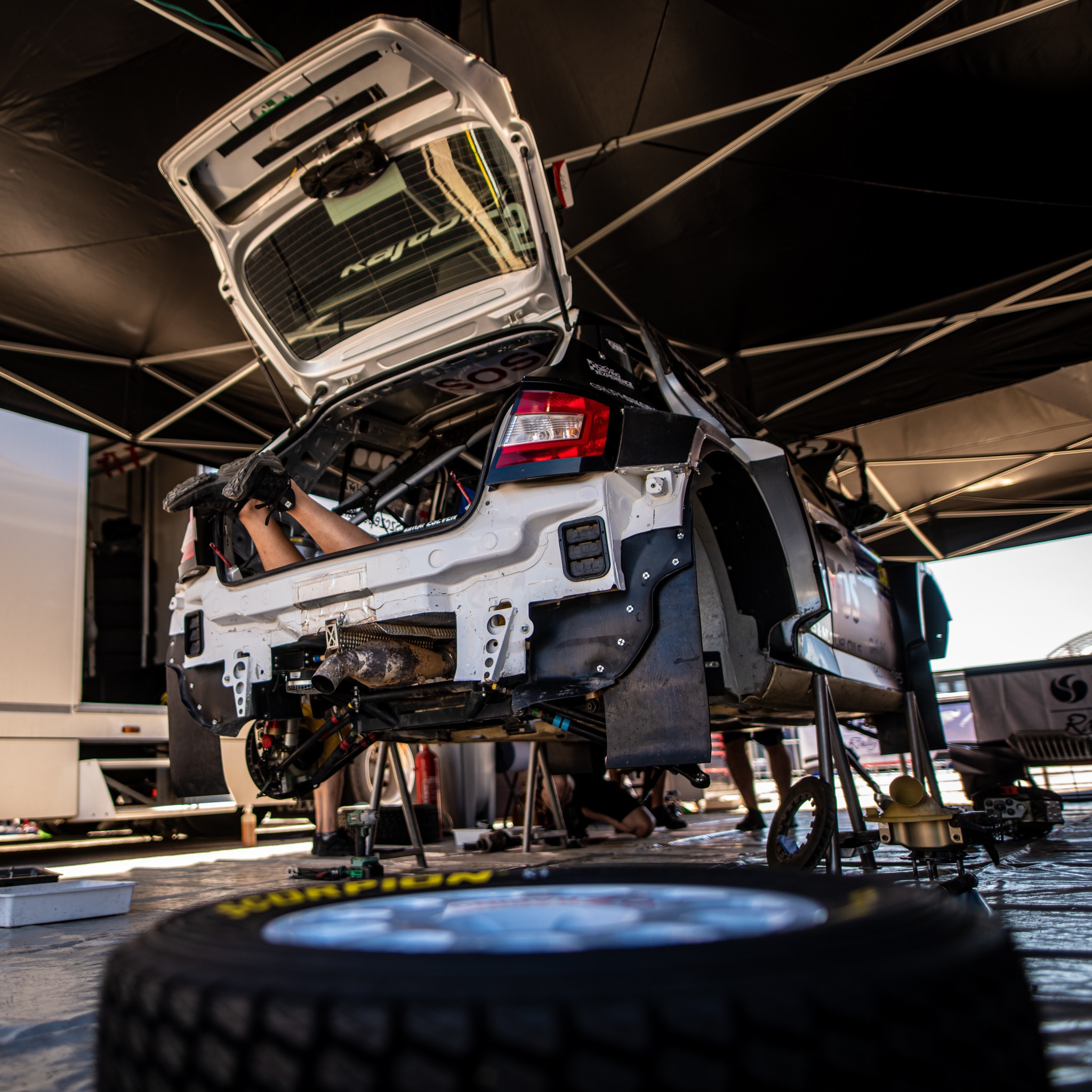 In a rallycar, the brake system can save valuable tenths of a second in the fight against the clock. The stronger the deceleration, the later the drivers can brake into a bend. In hard braking manoeuvres, the brake discs easily reach temperatures of more than 700 degrees C. To ensure efficient cooling at all times, the FABIA RS Rally2’s brake discs are internally ventilated, and an optimised brake cooling system is also available for gravel and asphalt stages.

Protecting the crew
Skoda Motorsport engineers have developed a roll-cage which has a total of 35.8 metres of high-strength chrome-molybdenum steel tubing and is welded to the chassis during body construction. The side panels and roof are then mounted over it. This procedure allows for even greater manufacturing precision, as well as a better fit and connection to the body. 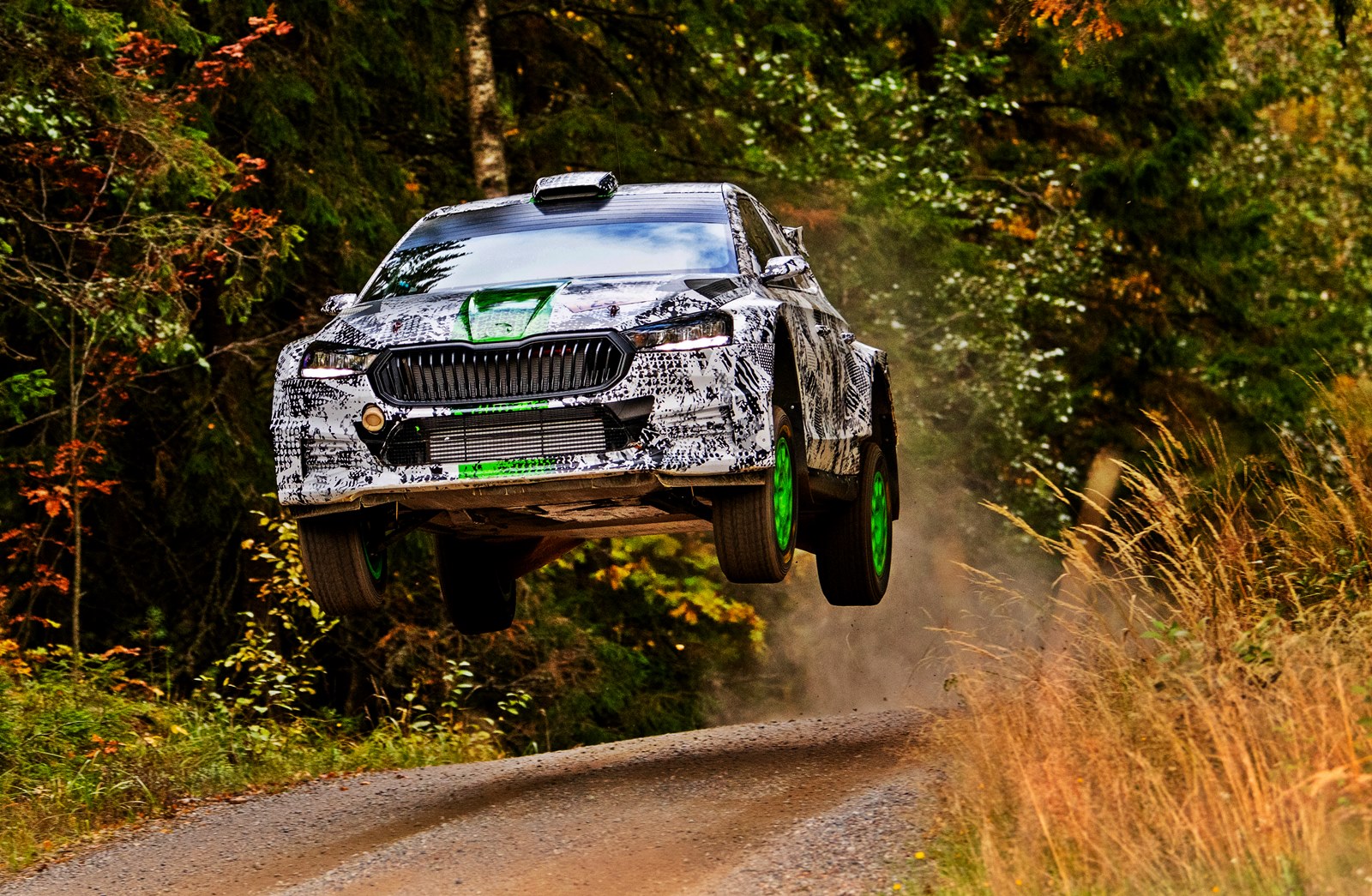 The chassis is also engineered to meet the extreme demands of rallying. Compared to the previous model, the suspension stroke of the dampers is now longer and the MacPherson struts are stiffer. In addition, friction in the dampers is reduced. The longer wheelbase also prompted the development of new suspension kinematics.

More downforce generated
Paying attention to detail, the designers managed to almost double the downforce compared to its predecessor – an enormous advantage on the track, as greater downforce facilitates higher cornering speeds. For regulatory reasons, there are no active aerodynamic parts such as the radiator louvre from the production FABIA. 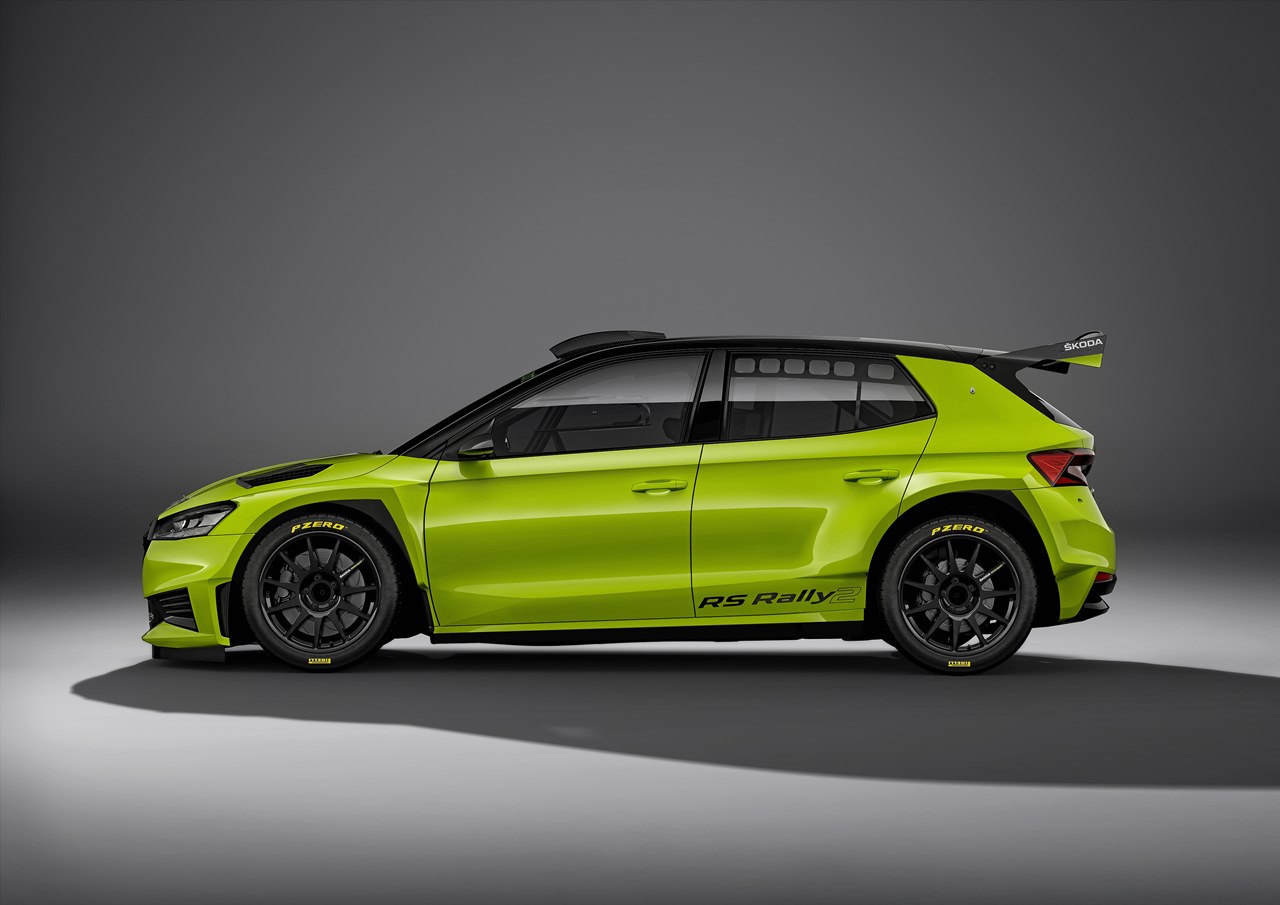 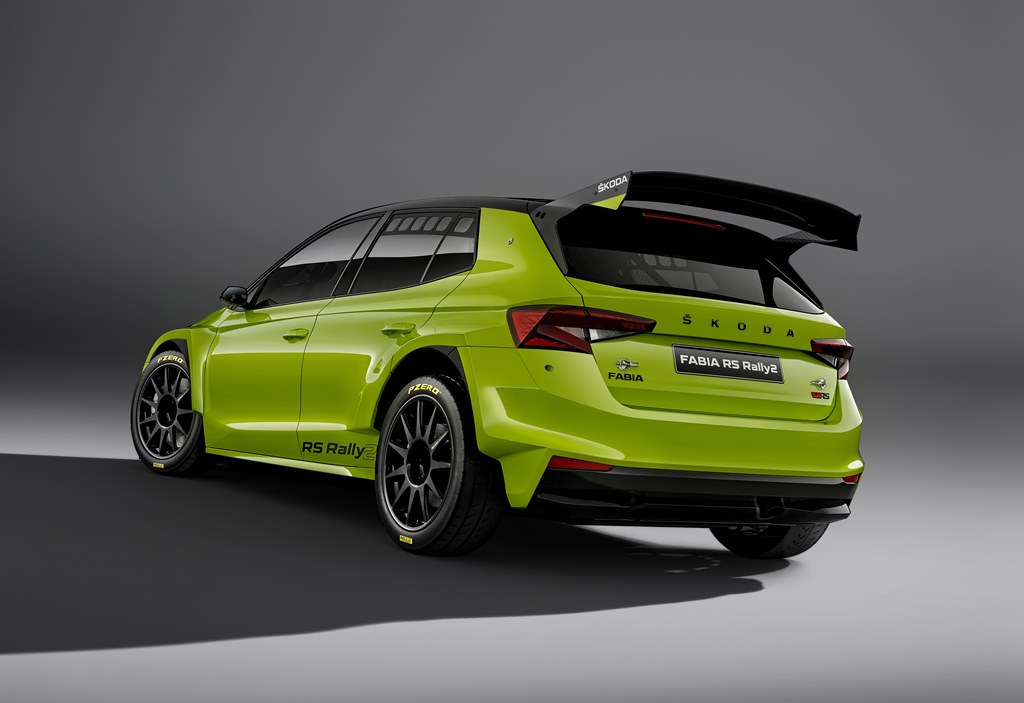 The same air curtains as in the front bumpers of the production car guide the airstream closely and aerodynamically over the body and wheels. They increase the downforce in combination with new side skirts, which prevent air from flowing underneath from the side. Incorporating a front splitter across the entire lower edge of the front bumper, they ensure optimum aerodynamic efficiency at the front.

Several aerodynamic components have been specially developed for the FABIA RS Rally2. In addition to the wider front and rear fenders, the newly developed rear wing increases the downforce. A small spoiler lip, the so-called Gurney flap, serves as a tear-off edge and also improves the downforce. The airflow over the roof is optimised thanks to a centrally positioned air scoop, which simultaneously supplies fresh air to the cockpit. 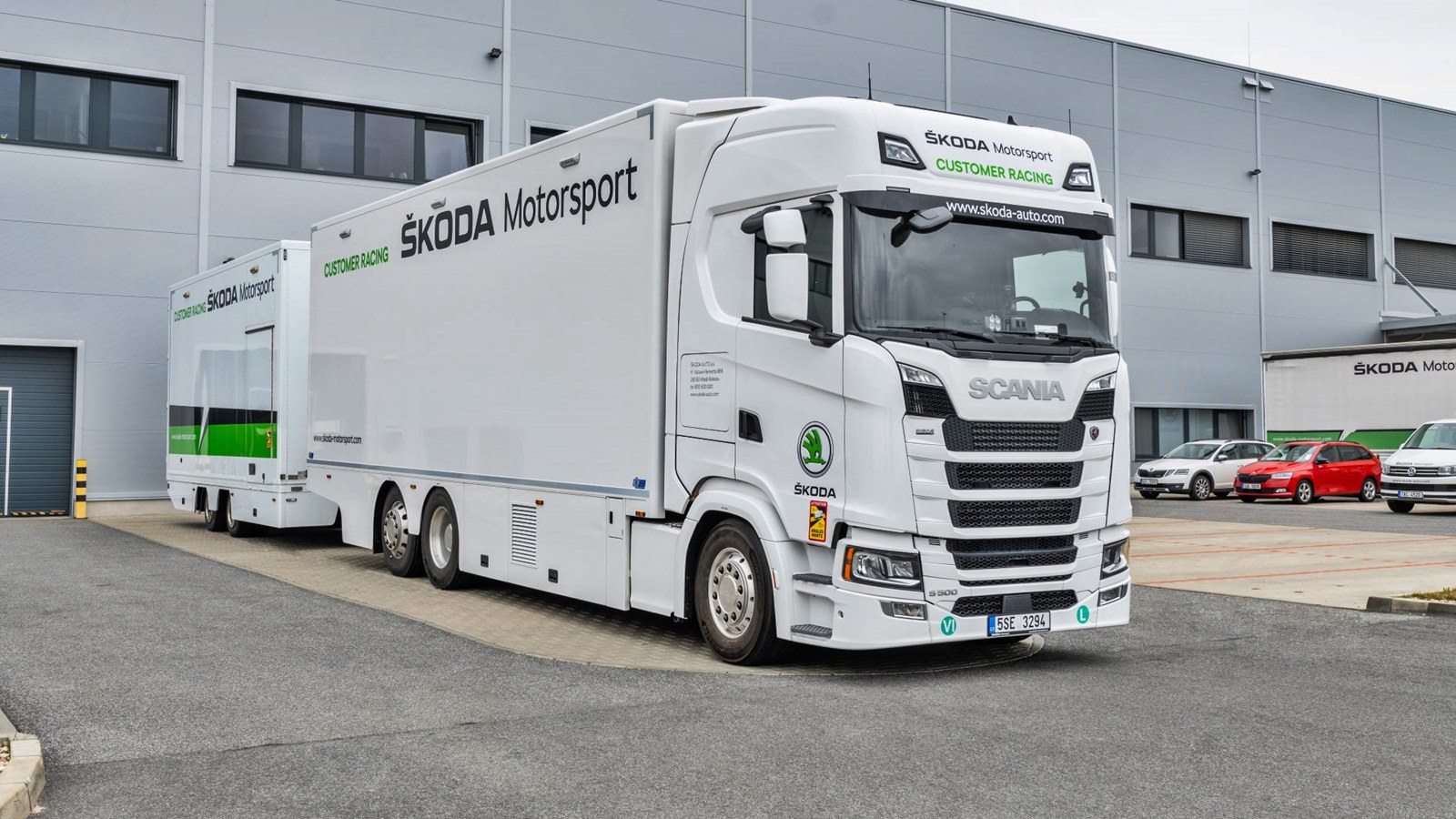 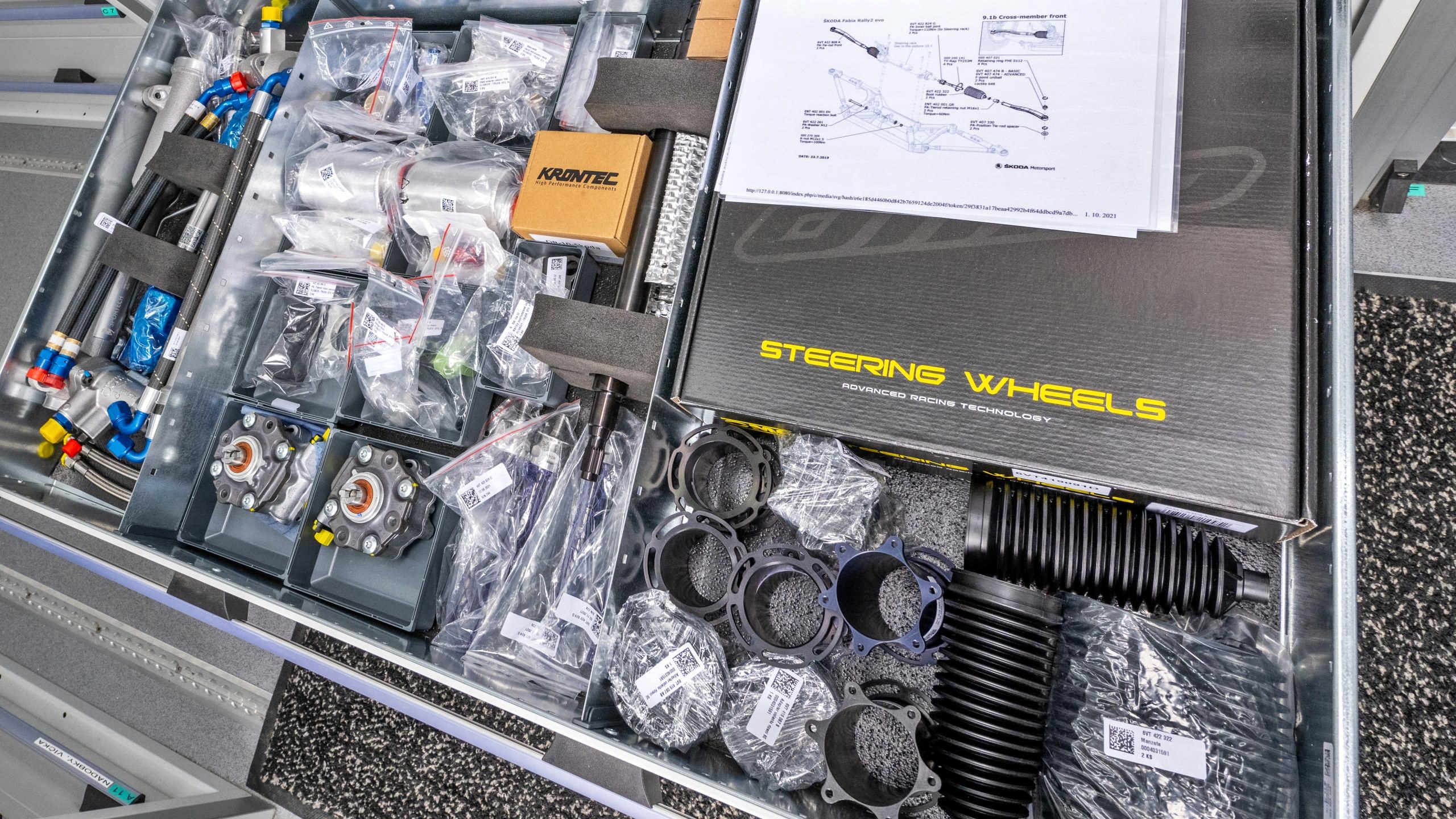 Support for customer teams
Skoda Motorsport has been supporting numerous customer teams in international rallying since 2020. The teams receive support that includes a comprehensive supply of spare parts and technical support, even at events. Additionally, Skoda Motorsports offers revision work on engines, transmissions and chassis components. Teams taking part in the WRC can also using Skoda Motorsport’s support truck equipped with an array of spare parts. It is available at selected WRC rounds and certain events in the European Rally Championship.