It was a wet race yesterday for the first part of the GAZOO Racing Vios Sprint Cup held at the Sepang International Circuit. But even with the challenging conditions, the pair of Eddie Liew and Putera Adam kept their cool to win the race. The Laser Motor Racing duo finished the 1-hour race well clear of Prima Pearl TD Racing’s Tengku Djan Ley and Mika Hakimi, while in third place was Telagamas Toyota’s Freddie Ang and James Liam Russell.

Laser Motor Racing’s Mark Darwin had led the opening stages of the race when he shot into the lead from fifth place on the grid, with team mate Liew in the second Laser Motor Racing car in close pursuit, followed by Toyotsu Racing’s William Ho and Axle Sports’ Hayden Haikal in third and fourth places, respectively. 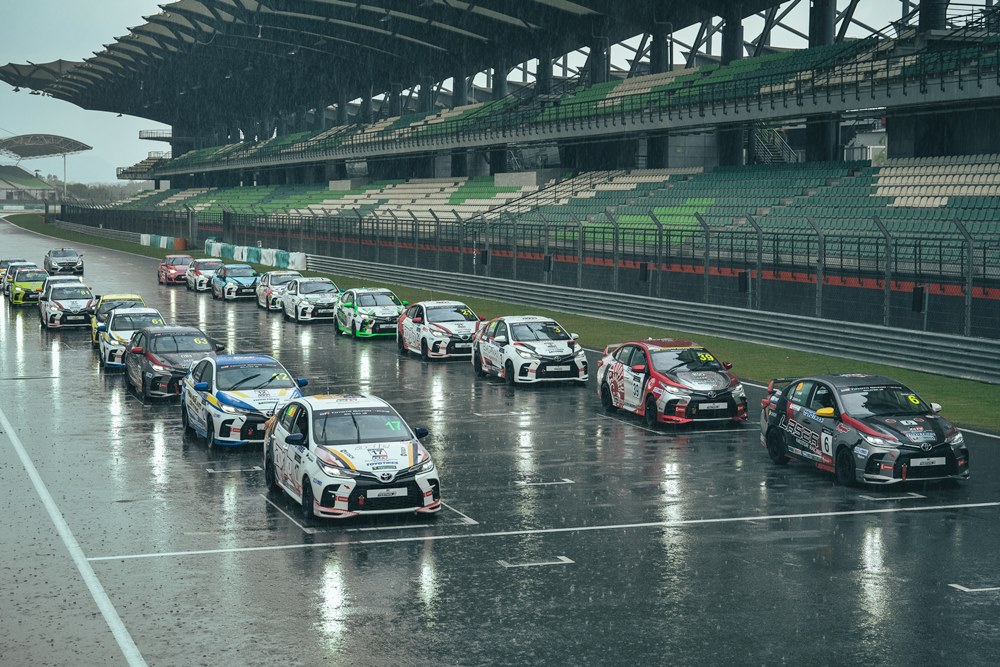 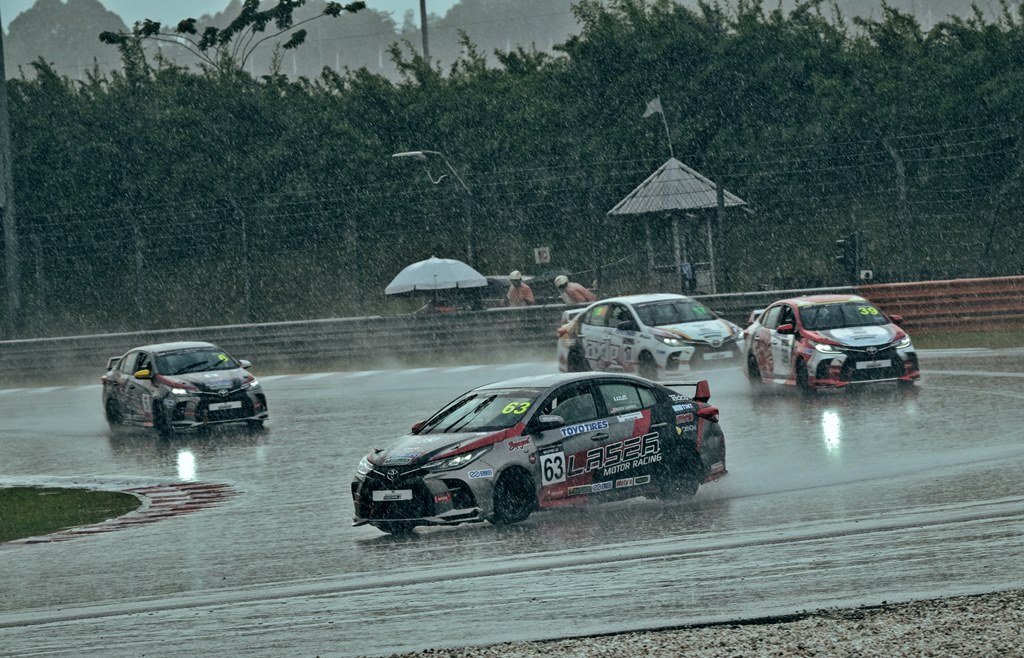 Darwin led for 6 laps, but in spite of trying hard, his lead never grew beyond 2 seconds and eventually, he was passed by Hayden in the seventh lap. The position would remain unchanged even after Naquib Azlan took over from Hayden in car #17. With a gap of more than 5 seconds, it appeared that the two young drivers were en route to another textbook finish.

How the outcome changed
But as seasoned racers will tell you, the outcome is never for certain till the chequered flag is waved and 3 laps before the finish, Naquib made a rare mistake when he came into contact with car #68’s Vincent Ng from Team Fokus. The collision sent Ng spinning off the track while a puncture resulted in Naquib having to make an unscheduled pits top that essentially lost the team the race. This promoted Putera Adam, who had taken over from Liew as the second driver, into the race lead. 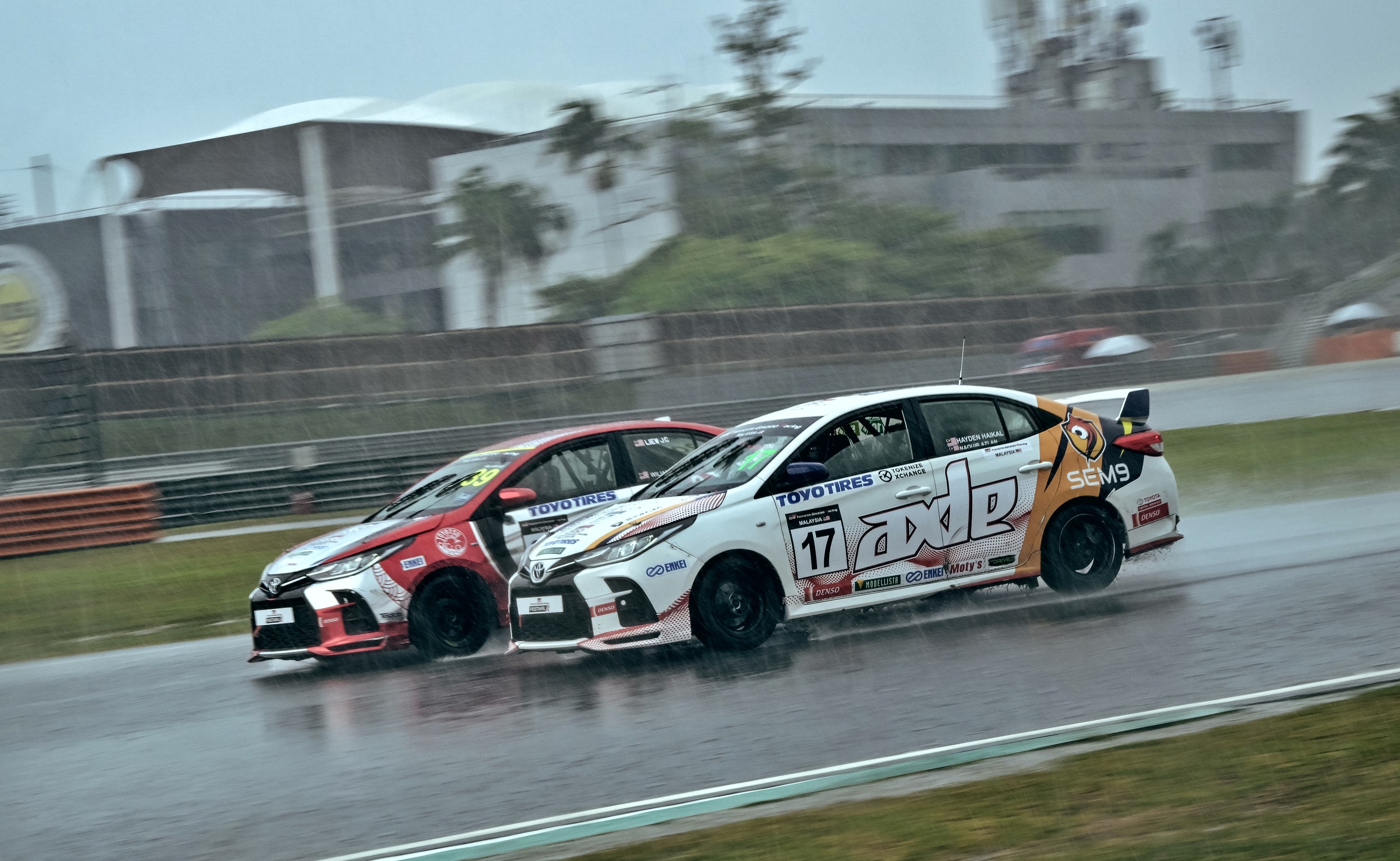 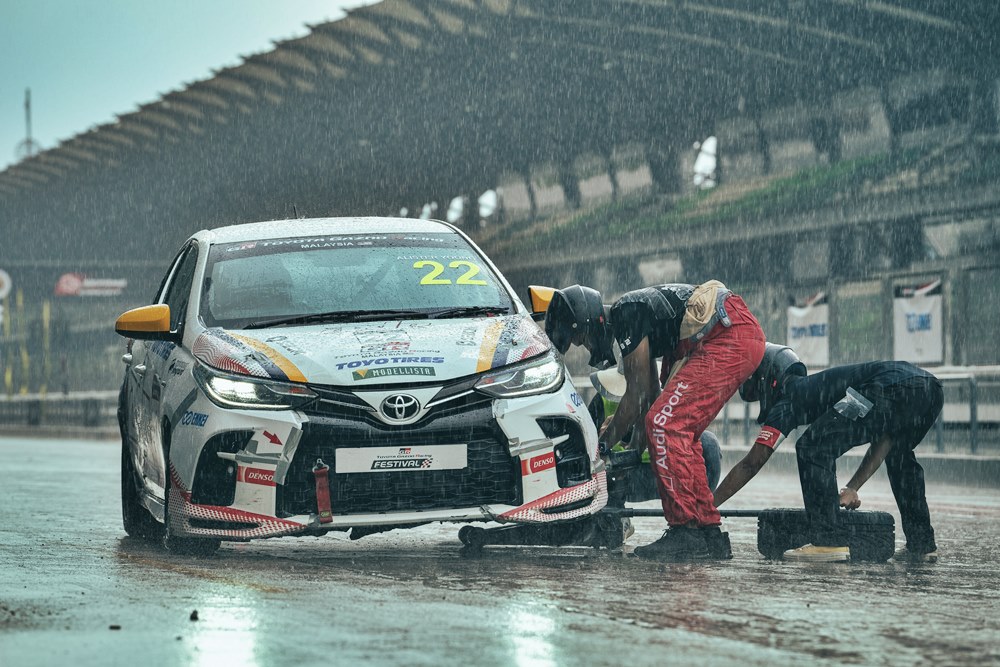 “I was just trying to run my own race and do my best in the difficult wet conditions,” said Putera who set a blistering pace around the 5.543-km circuit. Naquib’s misfortunes also enabled Tengku Djan Ley to move into podium contention after a sterling drive in the wet. He had clawed up the leaderboard from as far back as 12th place when he took over driving duties from Mika in the 10th lap of the race.

“We had a gearbox issue during the qualifying stint and maybe that turned out to be a blessing in disguise. Mika started the race and he did a great job of holding the pace in his stint. I basically had to put it together, keep my calm and take it to the finish line. It was a great team effort,” said Tengku Djan. 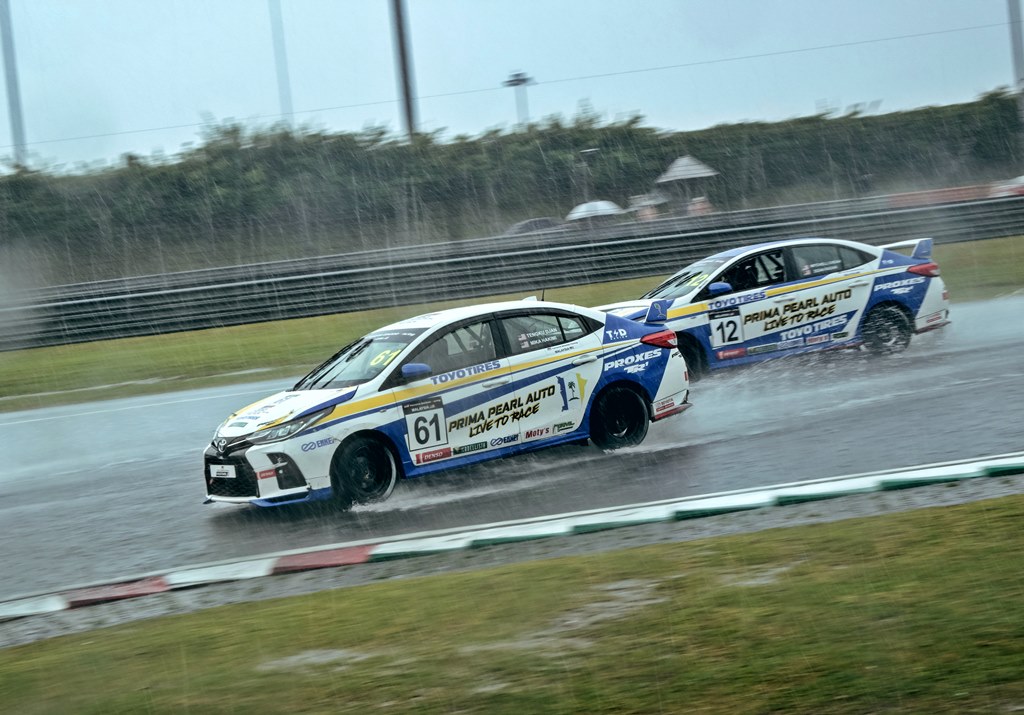 “We had a better car for the conditions today and it was a question of trying to find the fastest line around the track to post the fastest time. The weather was a bit erratic. It was raining heavily in certain sections and it didn’t even rain in some sections. I was trying to keep my cool. I saw Putera gradually pulling away and I was trying to find a quicker line just to keep up with him. It was a good race overall,” he added. 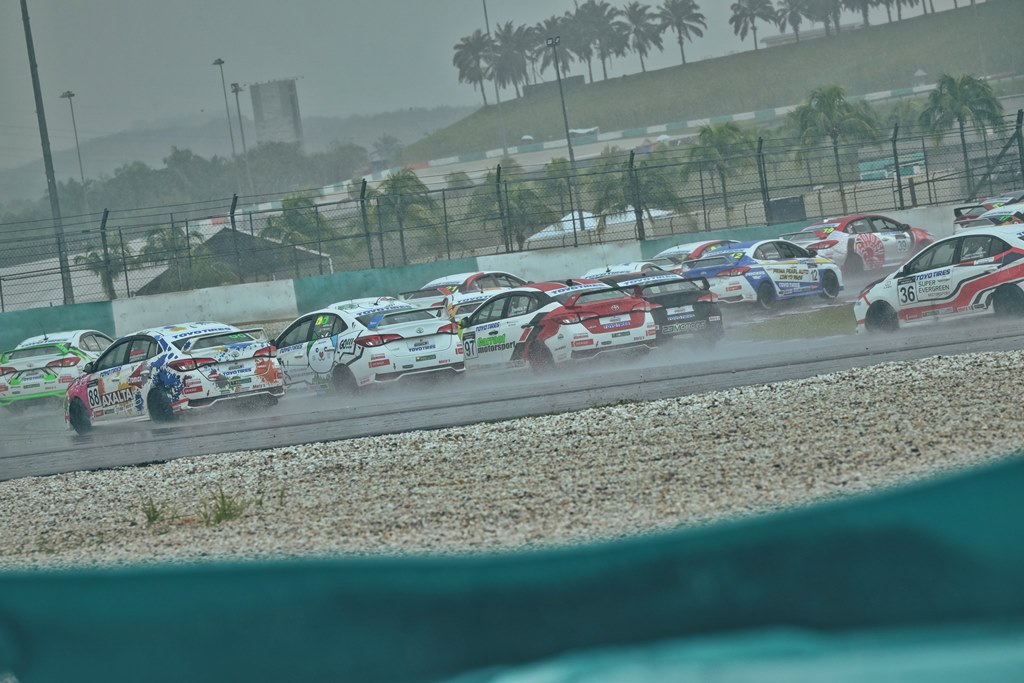 For the pair of Freddie Ang and James Liam Russell, the result was outstanding having started from sixth on the grid. “It was my first time back racing and also my first time racing in the wet. I didn’t bother trying to fight the top two cars. In the first few laps, I was well off the pace and I did my best to just try to follow them and learn my way around the track,” said Russell.

RM60,000 prize money
Held in conjunction with the Malaysia Championship Series, the GAZOO Racing Vios Sprint Cup is a one-make race with 2-driver teams competing in a 1-hour race and vying for total prize monies amounting to RM60,000. 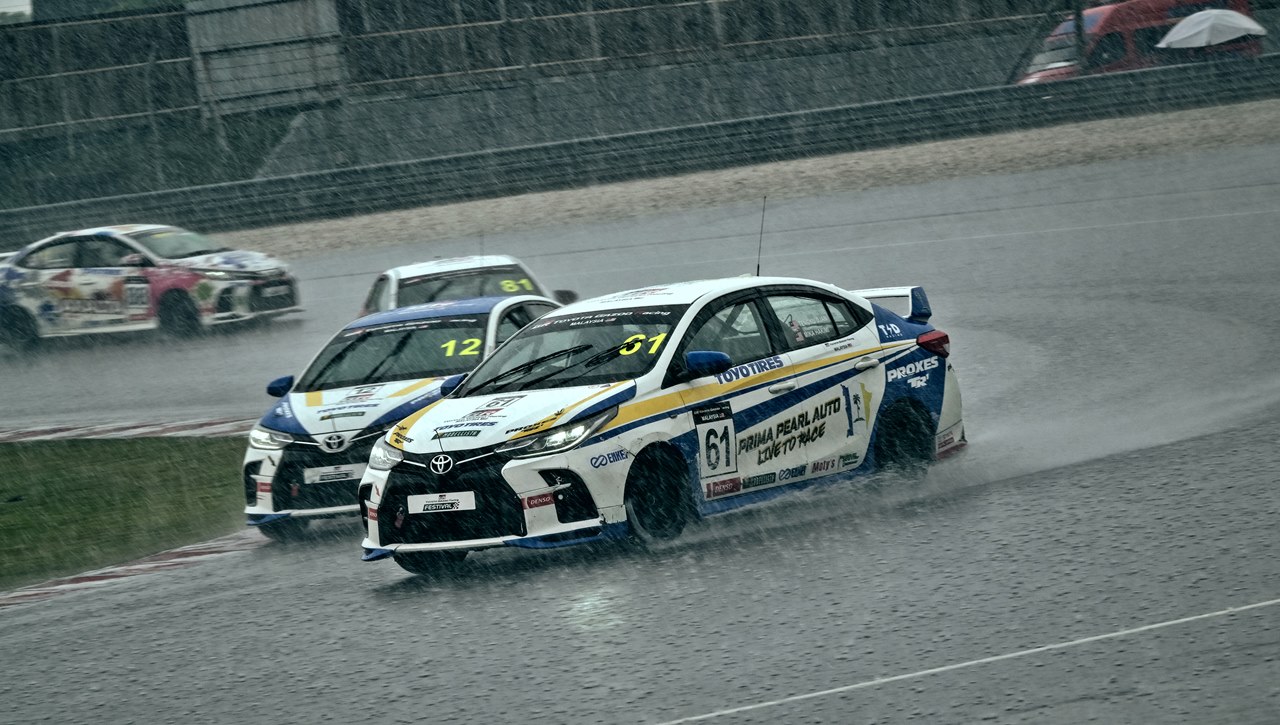 The GAZOO Racing Vios Sprint Cup is run independently of the Vios Challenge but it retains the format of a one-make series whereby competitors drive identical race-prepared Toyota Vios cars with stock standard engine and transmission, as well as suspension, tyres and fuel – to ensure that the emphasis is on racecraft, driving skills and experience. 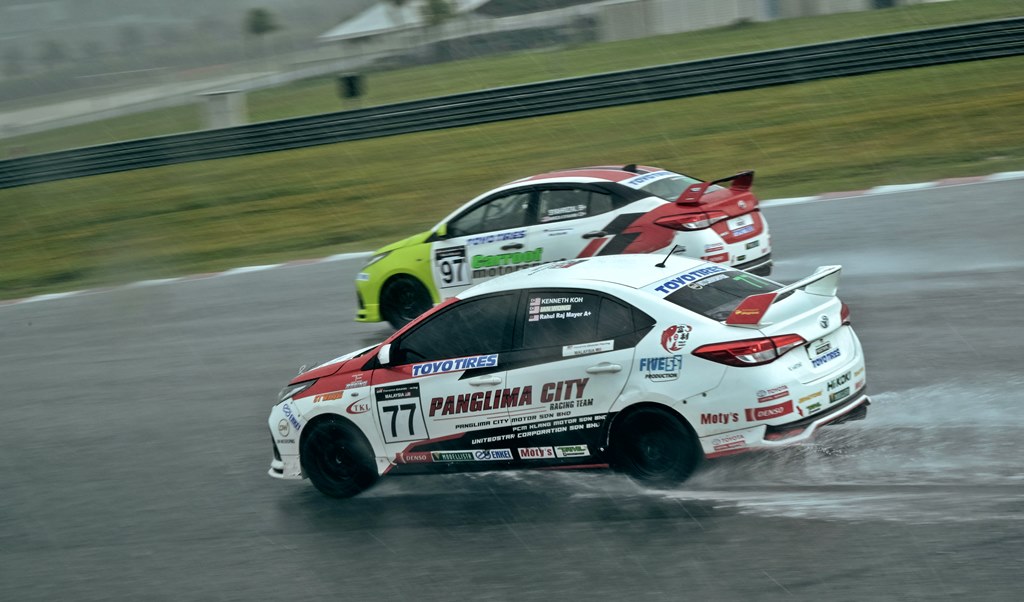 The second race will be run today (Sunday) and the starting order will be reversed to make things more interesting. Entrance is free to the Grandstand for those who want to see the action at the circuit. But for those who can’t go, you can still watch the race live as it will be broadcast on the Toyota Malaysia Facebook page.

The Father and Daughter racers in the Vios Challenge