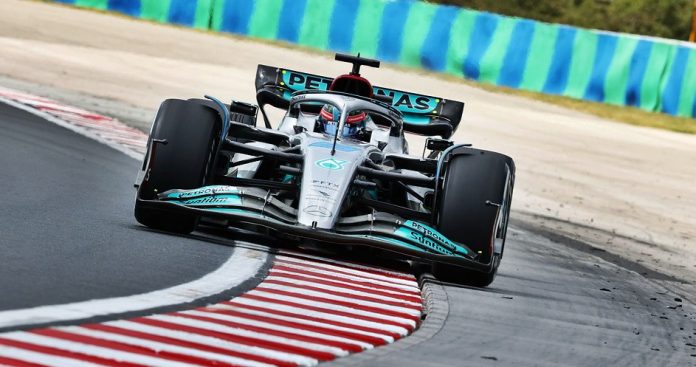 Race starts at 3 pm in Hungary/9 pm in Malaysia

Just days after a dramatic race in France, the 2022 F1 World Championship is at the Hungaroring in Budapest for the Hungarian Grand Prix. This is the 37th time the event has been held and it has been on the calendar every year since being added in 1986. All of the F1 races in Hungary have been held at the Hungaroring; Monza in Italy is the only track with a longer run of consecutive Grands Prix.

It’s therefore a familiar circuit and engineers who have prepared for the hot and dusty environment. The air and track temperatures experienced at the Hungarian F1 Grand Prix are typically some of the highest of the season, with an average air temperature of 30°C and average track temperature of 49°C. In fact, during practice last year, the temperature was seen to reach nearly 60°C.!

But with climate change, unexpected weather can also occur. On the past two occasions,  it’s actually rained just before the race – and this year. rain came down during final practices. Last year, that led to a somewhat surreal re-start following a first corner incident. “We’ve seen some surprises at the Hungaroring before, and that could be the case even more this year,” predicts Mario Isola, Pirelli’s Motorsport Director.

The Hungaroring circuit has 14 turns running around a valley. It is twisty and bumpy, giving a ‘street circuit’ feel like that of Monaco (or rather ‘Monaco without walls’, as some describe it). It was resurfaced several years ago, and most of the bumps were flattened out. However, the track surface is gradually starting to show its age and the irregularities are forming again.

Six of the 14 turns are left-handers and 8 are to the right. Many of these corners are combined, making good directional changes more important. The straights are relatively short and taking the corners at the right speed is crucial. Consequently, the standard setup for Hungary includes maximum downforce.

Due to its nature as a high-downforce track, the Hungaroring has one of the lowest top speeds of the season so far: 308 km/h. The F1 cars only go straight for about 10 seconds during the course of a fast lap, spending the remaining 65 seconds or so cornering. Only 65% of the lap distance of 4.381 kms will be taken at full throttle – one of the lowest ratios in Formula One.

The kerbs in the final corner can be very aggressive, and the same applies to the exit of Turn 11. However, unlike on faster tracks such as Spielberg, the kerbs in Hungary are driven over at lower speeds (but keeping within track limits, of course). The chicane (Turns 7 and 8), on the other hand, can prove problematic, especially in the wet, and take the drivers by surprise.

The twisty track makes it seem like a big go-kart circuit and this affects the average lap speed which is below 205 km/h throughout the race, but can increase to 214 km/h during the qualifying rounds. On each lap at the Hungaroring, the drivers use their brakes 11 times for a total of 14.3 seconds per lap which amounts to 19% of the duration of the race. ​

The hardest on the brake system is going into Turn 1: to go from 321 km/h to 95 km/h, the drivers have to brake for 2.43 seconds with a load of 142 kgs on the brake pedal, during which they are subjected to 4.6 G deceleration. In that length of time, the F1 cars cover a distance of 118 metres.

“In the past, the Hungaroring has been known as a place where it’s difficult to overtake, but the new package of cars and tyres this year helps drivers get much closer to each other, which is why we have seen some great races with plenty of overtaking so far this season. Hopefully, that’s going to be the case at the Hungaroring as well; a tight and twisty track where the cars are often grouped together,” said Pirelli’s Isola.

Max Verstappen’s victory in France, combined with a disappointing DNF for Ferrari’s Charles Leclerc and fourth place for Red Bull teammate Sergio Perez, gives the defending World Champion a healthy lead in the Drivers’ Championship. He is 63 points ahead of Leclerc and a further 7 points beyond Perez. Red Bull, meanwhile, pull ahead in the Constructors’ Championship and now lead Ferrari 396-314. And the Italian team is now seeing a resurgent Mercedes-AMG just 44 points behind.

A bit of history: the 2009 Hungarian Grand Prix was the first race in F1 history to be won by a hybrid car. Back then, using the Kinetic Energy Recovery System (KERS) was optional and the opening races were won by cars with conventional engines. However, Mercedes-AMG had developed a hybrid system run by McLaren-Mercedes in 2009. So, when Lewis Hamilton won the event that year, it was the first ever victory for a hybrid F1 racing car.

Over its long history, Lewis Hamilton has been the most successful driver at the Hungarian Grand Prix, with 8 victories – twice the number of Michael Schumacher, who is the next driver on the list. McLaren has had 11 victories at the Hungaroring, the most of any team.