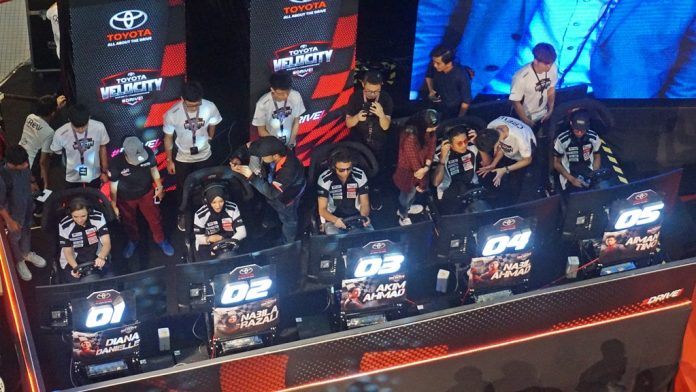 Besides the successful and popular Toyota Vios Challenge one-make series, UMW Toyota Motor has also been running another motorsport series – in the virtual world. This is the Toyota GR Velocity E-sports Championship which is in its fifth year in 2022. The most lucrative local online racing series in the country offering cash prizes, it is also the first and only E-sports motorsports-racing event promoted by a Malaysia car company.

First held in 2018, the number of participants in the Toyota GR Velocity Esports Championship has grown exponentially, with the event drawing more than 1 million online spectators per season. “2022 marks the fifth season of not only the Toyota GR Velocity Esports Championship, but also the Toyota GAZOO Racing Vios Challenge race series. It used to be that virtual racing and real racing are two very different entities, but we are honoured to have witnessed first-hand how both disciplines are contributing immensely towards producing Malaysia’s next generation of competitive racing drivers,” said UMW Toyota Motor President, Ravindran K.

He noted that the company has successfully pioneered the transition of 4 young simulator drivers into saloon car racing over the last 2 years. One of those drivers is Nabil Azlan, who finished third in last year’s GR Velocity Esports Championship and is today not only competing in saloon car racing but is also one of the championship frontrunners in the Rookie Class of the Vios Challenge race series.

This weekend will see the final showdown of the season at the 1Utama Shopping Mall in Petaling Jaya, Selangor. With 11 races in 4 distinctive racing cars. this year’s winner will emerge from the 20 best online racers competing against each other for a total prize pool of RM70,000 and a ticket to represent Malaysia on the international arena.

The 20 racers have come up from an initial group of more than 500 contestants who had participated in a gruelling qualifying round held between July 9 and 17. This weekend’s Grand Finale will see 2 rounds of semi-final races being held to decide the top 10 drivers for the final.

The semi-finals will see racers battling it out on two circuits: the 4.265-km Brands Hatch and 3.8-km Goodwood circuits in the United Kingdom. The racers will drive the Toyota SFR Racing concept and a Toyota 86 Group B rally car, respectively.

For the final races, the battle will take place on Brazil’s 4.309-km Autodromo Interlagos behind the wheel of a 591 bhp Toyota GR Supra Racing Concept, and also a 1,000 bhp Toyota TS050 Hybrid at the 7.004-km Circuit de Spa-Francorchamps in Belgium.

Among the favourites returning this weekend are 2-time defending champion Taj Izrin Aiman Taj Madira, and the 2020 runner-up and third place winners Muhammad Iqbal Ahmad Suji and Mior Hafiz, as well as 2018 winner Muhammad Uzair. All 4 racers have had the opportunity to go on to the Regional Finals and will be hoping that 2022 will be the year which sees the first Malaysian driver going on to represent Asia in the Global Finals.

There will also be 4 exhibition races during the weekend event, involving drivers and celebrities competing in the Toyota GAZOO Racing Vios Challenge. Members of the media, invited gamers and young drivers in the Vios Challenge rookie class will also be invited to join in.

Besides watching the event live at 1Utama, the races will also be broadcast live on Astro’s eGG Channel, as well as the Toyota GAZOO Racing Malaysia Facebook and YouTube pages.