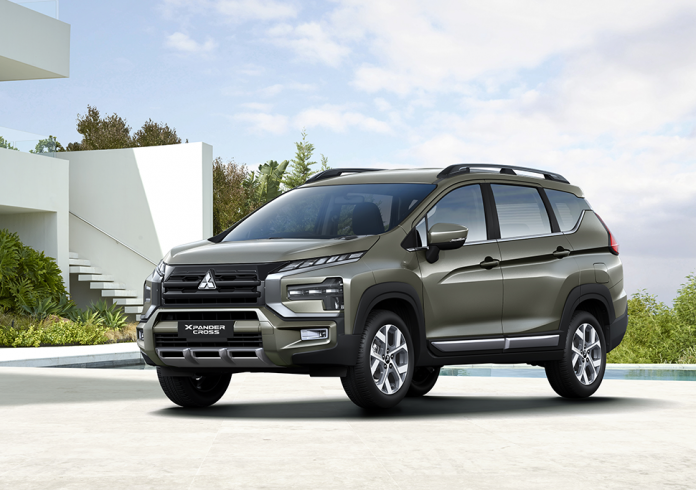 While the Mitsubishi XPANDER assembled in Malaysia is only available in the standard body version, some other markets also have an XPANDER Cross, a more SUV-themed version. It was added to the range in 2019 and at the 29th GAIKINDO Indonesia International Auto Show yesterday, an updated version of the XPANDER Cross was officially launched. Indonesia gets the new XPANDER Cross first as the 3-row crossover MPV’s production hub is located there.

The facelifted XPANDER Cross gets a new and more aggressive frontal design which continues to have the overall Dynamic Shield design concept that is also found on the Triton pick-up. The styling is more expressive and gives a stronger SUV image.

This has been achieved by combining the large grille with a trapezoidal motif and incorporating the bumper with a guard bar shape. The headlights have gained a distinctive T-shaped design that emphasizes the width of the vehicle. The signal lights, previously placed under the headlight units, are now incorporated into the upper position lamps to improve visibility.

In addition, the front and rear overhangs have been extended by 95 mm, while the bonnet has been thickened to create proportions that increase dynamism and stability.

At the rear, the tailgate has a more 3-dimensional shape, and the dividing line has been reduced to enhance the texture. The rear combination lamps have a wide design and the horizontal T-shaped tail lamp like the front. In addition to the conventional tail lamp and reversing lamp, the brake light is an LED type for better and faster illumination.

The front and rear skidplates and the gray paint on the door garnish are coordinated to create a 3-dimensional effect which gives a sense of strength, while the roof rail is finished in black. The 17-inch aluminium wheels have a medium gray 2-tone machined bright finish to provide highlighting.

The 7-person cabin has a dashboard which was designed using a ‘HORIZONTAL AXIS’ concept. The latest XPANDER Cross has a new large-diameter 4-spoke steering wheel which makes it easier to grasp. The 8-inch colour LCD crystal meter has more intuitive and easier to use operations. To reduce taking the hands off the steering wheel, the driver can use switches on the steering wheel itself.

The XPANDER Cross has the same powertrain as the rest of the range, ie a 1.5-litre 4-cylinder petrol engine (Mitsubishi 4A91) with 105 ps/141 Nm. Depending on the market, transmission options are 5-speed manual or CVT, but all versions have only front-wheel drive.

While there are no powertrain updates, the XPANDER Cross now has Mitsubishi Active Yaw Control (AYC) for better cornering control. The system adjusts the braking force of the front left and right wheels to improve turning performance, suppressing understeer.

Some changes have been made to the suspension to improve ride comfort. The rigidity of the front strut mounting area has been increased while the rear shock absorber cylinder size has been expanded. High-performance front and rear valves have also been newly adopted to achieve a flat and comfortable ride even on rough road surfaces.

Up till the end of 2021, over 580,000 units of the XPANDER/XPANDER Cross have been sold in ASEAN markets as well as the Middle East South Asia, South America, Central America and Africa. In countries like Malaysia, the XPANDER has been assembled locally to have a more competitive price in the market.