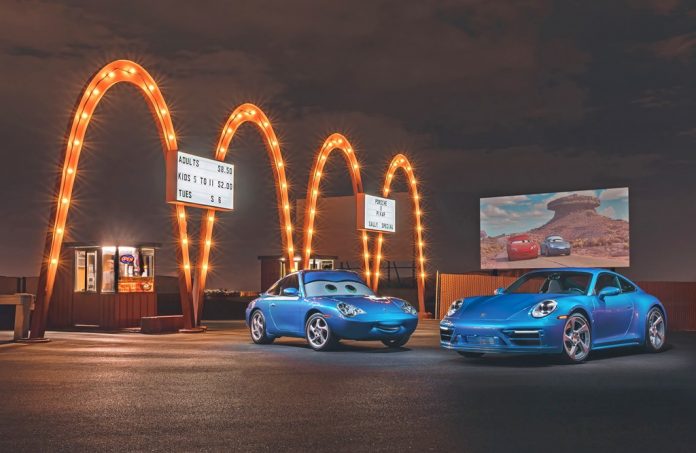 Porsche and Pixar Animation Studios have revealed a special Porsche inspired by one of the most beloved 911 models of all – Sally Carrera, from Disney and Pixar’s Cars. Named the ‘911 Sally Special’, the sportscar is like Sally Carrera herself – unique. Only one 911 Sally Special will ever be made – and its creation marks the first time Pixar has collaborated on such a project.

The project, which began in November 2021, reunited members of the original Cars team who created both the movie car and the life-size Sally Carrera based on a 2002 Porsche 911 Carrera two decades ago. They were joined by key members of Porsche Exclusive Manufaktur’s Sonderwunsch team and designers from Style Porsche in Germany, as well as from Porsche Cars North America. Over a span of 10 months, the team worked together to create just one unique car.

“The Sally Special is based on the fastest, most engaging and agile 911 Carrera there is – the 473 bhp 911 Carrera GTS – equipped with a manual gearbox to appeal to those who love driving, just like Sally Carrera. The changes to transform it into the ‘Sally Special’ proved to be extensive,” explained Boris Apenbrink, Director Porsche Exclusive Manufaktur Vehicles.

“This was one of the most intense, emotional and detailed Sonderwunsch projects our team has ever worked on. For example, the car is finished in a new and unique colour – Sally Blue Metallic – developed specifically for the 911 Sally Special. Taking our inspiration from Sally Carrera, we finished as much of the car as possible in the new colour, meaning dozens of tiny changes, many of which were carried out by hand, such were their intricacy. Of course, we didn’t forget about Sally’s pinstripe tattoo, which was an interesting challenge,” he said.

The ‘Turbo’ inspired wheels have been redesigned by Style Porsche designers in Weissach and created specifically for the 911 Sally Special. The 5-spoke design has been subtly modified to match the 20/21-inch diameter of current-generation 911 wheels, but remain true to the Type 996 Porsche.

Porsche designer Daniela Milosevic led the team working with Pixar to develop not only the unique paint colour but also almost every surface inside the car. All of which was either re-trimmed or changed in some way. “We had a completely blank canvas to work from, which was great! In the movie, Sally was a former-lawyer from California who appreciated style and elegance. But she was also down to earth and had a sense of fun,” said Milosevic. “We continued the Sally Blue Metallic theme inside the car, with the obvious highlights and much more subtle elements too –many little touches that will hopefully make the winning bidder smile.”

“Everything had to be usable and practical – we really want this car to be driven. We created special cloth trim for this car and wove subtle blue highlights into it. Then we matched this with Chalk leather and Speed Blue and Chalk stitching. The best part has definitely been working on the details – including many little nods to the movie Cars, and to Sally Carrera herself,” Milosevic added.

“Vehicles need a face and a story. And Pixar’s film Cars did just that, by bringing them to life on the big screen,” said Dr. Sebastian Rudolph, Vice President Communications, Sustainability and Politics at Porsche AG. “The story conveys values such as friendship, love and mutual support – and in the middle of it all is a Porsche: Sally Carrera. Together with Pixar, we have brought the spirit of Sally to life in a new way, not on the screen, but off the screen. With this one-off street legal 911, the Sally Special, which we are auctioning for charity, we want to help people who urgently need support, quite in keeping with the spirit of the film character.”

Two charities will be the beneficiaries of the sale of the 911 Sally Special, with the entirety of the sale price being donated. The project will also support USA for UNHCR, the UN Refugee Agency, which is working to provide urgent help to nearly 6.2 million refugees who have been displaced across Europe since the outbreak of war in Ukraine.