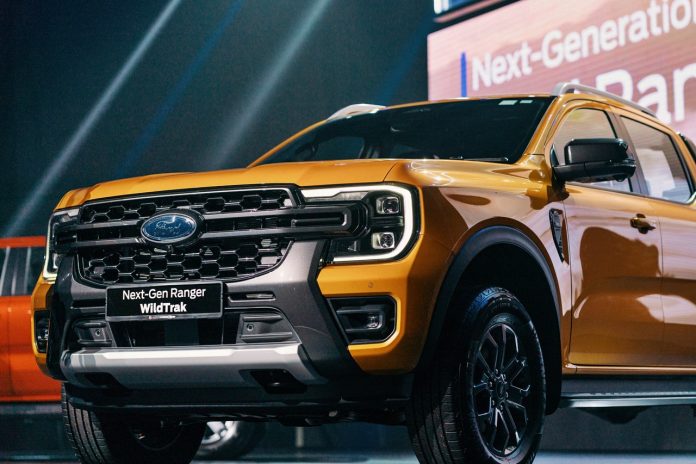 To make a great pick-up truck, ask customers what they want. That was how designers of the next-generation Ford Ranger started their project. Max Tran, chief designer for the new Ranger, and his team spent hundreds of hours with customers around the world to see how they use their pick-up trucks on a daily basis.

More than 5,000 interviews were conducted and more than 1,800 pages of field notes were generated for reference, which helped development and guide both engineers and designers to build a truck with the features and capability customers wanted.

With these insights, plus the Ranger’s award-winning pick-up truck formula, they created the next-generation Ranger as an iconic, versatile and trusted pick-up truck customers can trust to tackle almost anything.

“Seeing owners use their trucks, whether for work, family or play, inspired some fantastic ideas that drove our design and development decisions,” said Tran. “One great example of that is the integrated box side-step. During our clinic sessions, we noticed that many customers had trouble reaching over the side of the truck into the bed; others were standing on the rear tyre or the bumper to gain access,” Tran said.

“So, we came up with the idea of a box step, behind the rear wheel,” he said. “We mocked one up, tested it with owners and the response was overwhelming. People told us that step would be reason enough to buy the Ford Ranger,” he revealed.

Exterior Design
The exterior design of the next-generation Ranger followed two important guiding principles: to bring it into the future and to make it Built Ford Tough. “Customers had clear ideas on what they liked and how they used their Rangers in their day-to-day lives,” Tran said. “We also needed to incorporate features customers wanted and valued to ensure it was welcoming and contemporary and as versatile as it was capable.”

Some of the designers looked to nature, some to architecture and some others to art for inspiration. “We didn’t hold back. We let our designers loose to really go for it,” Tran said. They also thought of the Ranger as the brother of the F-150, the best-selling truck in the world, and drew some styling elements from it.

“The Ranger has developed a strong following over the past 10 years, and we really leaned into the iconic design features that have made it such a beloved truck across the world but also push the design envelope,” said Tran.

The pick-up’s athletic look is intentional, with surface treatments executed to be strong and muscular. From the bold new grille with its C-clamp headlights, daytime running lights and strong horizontal upper grille bar, to the pronounced wheelarches, strong shoulder line and large sculpted Ranger logo on the tailgate, the next-generation Ranger conveys confidence and capability.

At the rear, the taillamps were designed in harmony with the graphics of the C-clamp headlight treatment. By extending the track and wheelbase by 50 mm (compared to the previous Ranger), the designers were able to push the front wheels out to the corners, enhancing its on-road stance.

Interior design
Inside, the next-generation Ranger not only features a stylish new and spacious cabin but the cockpit also has user-friendly technology. Soft-touch materials and appliques elevate the interior ambience with a premium feel while the new instrument panel adopts a coast-to-coast design that enhances the spacious feel.

Several design cues also are carried over from the exterior. The air vent vanes, for example, feature a similar design to those in the front grille, and several exterior surface treatments have been adapted for interior use.

The dashboard is dominated by a 10.1-inch or 12-inch high-resolution touchscreen (depending on version) solidly mounted into the centre section, complementing the digital instrument cluster. Customers expressed a preference  for the screen’s portrait orientation because it created enough space for navigation screens while also leaving room in the lower portion of the screen for other menus, like those for the climate and entertainment controls.

The designers also reimagined key aspects of the cabin. One example: how the door release handles could be better integrated into the ‘coast-to-coast’ dashboard design, making them easier to use. Again, customer feedback led to the door release handles being mounted lower, providing easier reach to window switches and the armrests. Rear occupants also get cooling outlets at the rear of the centre console.

The seats also have been redesigned, with new bolsters and foam inserts that are more inviting, stylish and comfortable. Versatility is key with the second-row seats now folding flat and boasting out-of-sight and secure under-seat storage. There is also an added storage area in the door pockets with space both in the front and back.

“The next-gen Ranger really redefines the role of the pickup as a trusted partner for work, family and play,” said Gary Boes, Enterprise Product Line Management director, Global Trucks. “With the help of all the rich insights from customers, we’ve created a Ranger we believe will inspire owners to do more of what they love to do, with features that encourage them to explore new horizons.”

Join the Debut Tour
The next-generation Ranger has been making a debut tour since its first public appearance last month. Sime Darby Auto ConneXion (SDAC), the sole distributor for Ford in Malaysia, is offering previews at a series of events around the country over 5 weekends. These include events in Kuching on September 7 -1 1 at Vivacity Megamall, and at the Suria Sabah Shopping Centre, Kota Kinabalu on October 5 – 9.