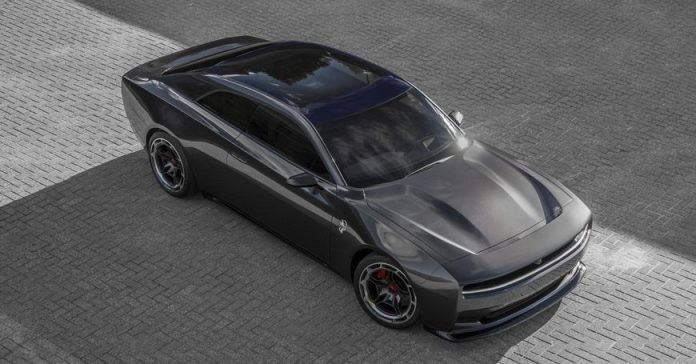 Dodge, an American brand in the Stellantis Group, knows that going electric is not an option but something which has to happen. Over its 122 years of existence, Dodge has had a wide variety of vehicles although in the 21st century, its line-up has shrunk and it is better known for its musclecars especially the Dodge Charger, which Torreto (Vin Diesel) used in various Fast & Furious movies.

Moving into the electric age, Dodge wants to maintain its performance image so unlike other manufacturers which have been giving previews of sleek, efficient EVs with a focus on range, the carmaker has been working on an electric musclecar.

The Charger Daytona SRT Concept shows how the company will shape its future musclecar. It retains the sporty styling cues of Dodge musclecars and is said to also go like one, but it runs on electricity instead of high-octane petrol.

The R-Wing, which pays homage to the original Charger Daytona, allows air to flow through the front opening, enhancing downforce. Incorporated into this functional performance bonnet, the R-Wing delivers an aerodynamically improved pass-through design. Carbonfibre intakes tucked into both sides of the front and rear lower fascias provide an air curtain to assist in exceeding aerodynamic performance targets.

Giving the concept the ‘Daytona SRT’ name carries with it great performance expectations because it recalls the famed Charger Daytona model that was the first vehicle to break 320 km/h on a NASCAR track in 1970.

This performance will be delivered by a new propulsion system that Dodge calls ‘Banshee’. Its 800V system will give performance levels faster than the Hellcat. Unlike typical EVs, the eRupt multi-speed transmission for the concept car has electro-mechanical shifting with distinctive shift points. All-wheel drive provides stability and grip as well as all-weather capability.

The Charger Daytona SRT Concept also boasts a PowerShot push-to-pass feature. Activated by the push of a button on the steering wheel, this feature creates a boosted output (figures are not given) that quickens acceleration for brief periods.

While quietness is used as a selling point of EVs, Dodge has given this electric musclecar the sort of sound that will be missed in future. It’s 126 dB roar comparable to that of the SRT Hellcat, generated through a new, patent-pending Fratzonic Chambered Exhaust system (yes, an exhaust on an EV).

The industry-first Fratzonic Chambered Exhaust works by generating sound through an amplifier and tuning chamber located at the rear of the vehicle. So far, enthusiasts have had mixed feelings about this special feature, some finding it weird as they know it is artificially created. Torreto would probably not appreciate it, even if the performance is as strong as his Charger.

The interior is modern, lightweight and athletic, providing a driver-centric cockpit with all essentials cohesively packaged. The 12.3-inch centre screen is the largest ever fitted in a Dodge vehicle, complemented by a 16-inch curved instrument. An 8×3-inch H ead-up Display puts additional information ahead of the driver on the windscreen.

The slim, instrument panel (IP) and mid-bolster in Ultraviolet colour with blue and silver accent stitching feature a ‘waterline’ that extends cross-car. The upper IP is a step higher, an elevation change that creates a sculptural surface floating above the cluster. The Ultraviolet colour also touches multiple interior surfaces, such as the console, doors and seats, creating a halo that works with the Attitude Adjustment Lighting to enhance shadows and highlights.

A parametric texture unites the interior and provides a connection to the exterior by continuing the inspiration of the 1968 Charger grille detail on the inside. The parametric pattern adds fluidity and sculpture, spanning from the IP to door appliques, beneath the console and continuing to the rear armrests and rear console.

Circuit-like graphics originate on the carbonfibre floor and are strategically placed to surround occupants, flowing under the seats, moving to the centre console and dashboard,  and coming back to the driver, a subtle detail that acts as a circuit board, connecting one to another The.centre console includes a unique jet-fighter-inspired cap that flips up to allow engagement of the start button and a pistol-grip shifter design inspired by the past,

The concept seats are lightweight, race-inspired and slim in design, with an insert that features an abstract, perforated pattern of the Fratzog logo. The unique pattern fades out as it travels down the seat and reappears as it flows toward the centre of the seatbacks. The upper seatbacks feature openings and seat bolsters that provide an airy, race-oriented feel, while holding occupants.

“The Dodge Charger Daytona SRT Concept exists because performance made us do it,” said Tim Kuniskis, Dodge brand CEO – Stellantis. “Dodge is about muscle, attitude and performance, and the brand carries that chip on its shoulder and into the EV segment through a concept loaded with patents, innovations, and performance features that embody the electrified muscle of tomorrow.”