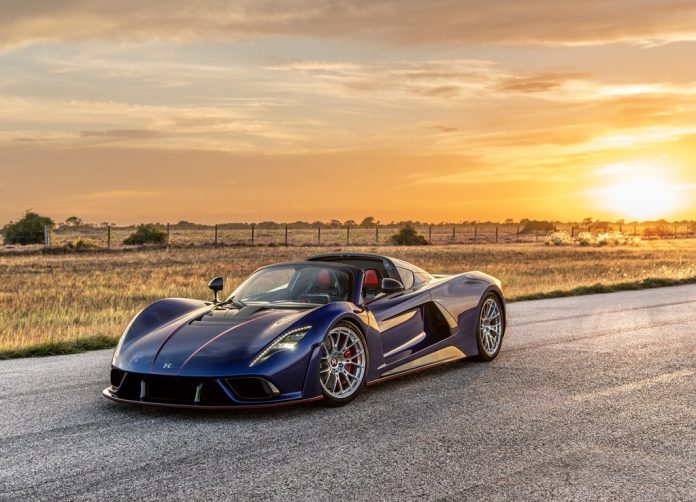 In 2016, Bugatti captured the record for the world’s fastest roadster when its Veyron Grand Sport Vitesse reached a speed of 408.84 km/h. Then Hennessey, the American high-performance manufacturer, came out with its Venom GT Spyder which clocked 265.6 mph or 427.62 km/h to claim the title of fastest convertible which it still holds.

Now Hennessey is aiming to push the envelope further by offering an even faster roadster – the new Venom F5 Roadster. This is a continuation from the premiere of last year’s sold-out Venom F5 Coupe and will have a price starting from US$3 million (about RM13.43 million) for each of the 30 units to be built.

To claim the new title, the Venom F5 Roadster will have hypercar performance and is targeted to exceed 480 km/h. This will be achieved with the mid-mounted 6.6-litre Fury V8 engine which can produce up to 1,817 bhp and send it to the rear wheels through a robust automated single-clutch gearbox.

“We created the Venom F5 to be the ultimate expression of a hypercar. The Roadster version takes the Coupe’s speed, exhilaration, and awe, plus a sprinkling of respect-inducing fear, to a new, truly visceral level that brings owners closer to the Venom F5’s extreme performance.” Said John Hennessey, company founder and CEO.

The most conspicuous design feature of the Venom F4 is the new roofline. In contrast to the F5 Coupe, the F5 Roadster’s roof has been re-engineered with an 8-kg removable panel crafted from rigid carbonfibre composites. The weatherproof panel is secured with 4 quick-release bolts and a pair of high-strength latches to withstand the Hennessey hypercar’s staggering acceleration capabilities and aerodynamic forces at extreme speed.

Owners may choose to store the panel in a bespoke Merino wool travel bag or as a standalone work-of-art on a custom-made, sculptural pedestal. The roof pedestal, crafted in carbonfibre like the roof panel, mirrors design themes from the Venom F5 Roadster. Viewed from above, its ‘blade legs’ trace the shape of the car’s rear decklid, while the side profile uses the hypercar’s bodyside air intake form for inspiration.

The Venom F5 Roadster features a new tempered glass engine viewing window. This panel, in the middle of the rear engine cover, spotlights the massive V8 engine. Its development was no simple task as the Hennessey engineers had to make it good enough to be certified for use in jet aircraft. The sizeable glass panel can withstand aerodynamic forces exceeding 480 km/h and temperatures beyond 540 degrees C.

The Roadster is further distinguished from its coupe sibling by its unique wheels. Forged from aluminium alloy and then milled to perfection, the lightweight wheels have 7 pairs of spokes, each resembling an elongated Hennessey ‘H’. The wheels are secured with 5 titanium nuts with high  strength, heat tolerance, corrosion resistance, and extremely low mass.

Engineered by Hennessey from the outset with an open-top version in mind, so only minor adjustments were required to deliver coupe-rivaling chassis rigidity, strength, and stiffness. It will be built in Texas starting towards the end of this year, with validation of the model’s high-speed capabilities set to occur as the production rate levels out.

With Rimac now having a majority share of Bugatti (along with Porsche as another shareholder), it remains to be seen if Bugatti will want to reclaim the title in future.