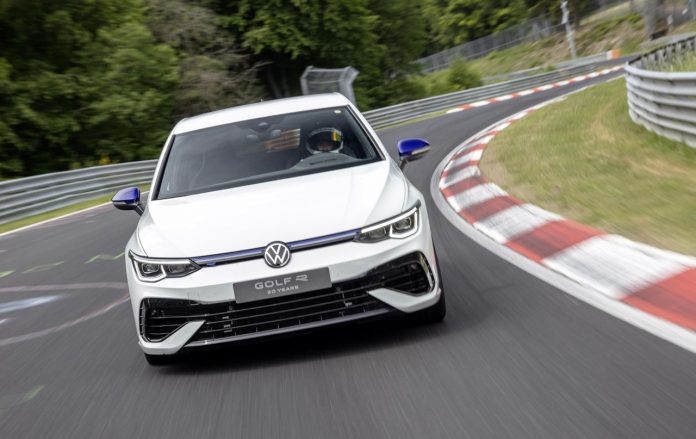 The Volkswagen Golf R celebrates its 20th anniversary this year and to mark this milestone, a Golf R “20 Years” became the fastest R model of all time on the famous Nurburgring-Nordschleife racetrack in Germany. The anniversary model bettered the previous lap record of a Golf R on the 20.832-km long course more by 4 seconds with its official lap time of 7:47.31 minutes.

But it is not just the power of the turbocharged engine that makes the special-edition model the most dynamic Volkswagen R of all time on the Nordschleife. The clear increase in performance is also the result of the extensive standard equipment with technical highlights such as the R-Performance package, Driving Dynamics Manager and R-Performance Torque Vectoring.

The record was set by touring car racing driver and Volkswagen R development driver, Benjamin Leuchter, who actively involved in the development of the R-Performance package for the Golf R “20 Years”.

Custom driving profile
Alongside the regular ‘Comfort’, ‘Sport’ and ‘Race’ driving profiles, the special-edition model also comes as standard with the additional ‘Special’ and ‘Drift’ profiles. For racing around the Nordschleife, the driver chose the ‘Special’ profile which was developed specially for the track.

This profile gives the Golf R a set-up that meets the unique requirements of what is probably the most demanding racetrack in the world. This includes adjusting the shock absorbers to a more soft and comfortable setting due to the enormous loads at the maximum performance level when driving on such tracks.

As one of the 15 possible settings of the controlled shock absorbers, this guarantees optimum road contact on tracks with a large number of bumps, just like the Nurburgring. Together with the adapted steering wheel and drive settings, this makes it possible to take the large number of fast and medium-fast bends on the Nordschleife in an ideal way.

The modified shift characteristics of the 7-speed gearbox allow gear changes with more intensive. The optimised exhaust system sound in the low engine speed range and the rougher engine sound in the cabin underlined the car’s increased dynamic performance.

Enhanced engine tuning
The step forward in development compared with the predecessor model is also shown by the enhanced engine tuning of the Volkswagen Golf R anniversary vehicle. The preloaded turbocharger is also kept at a constant speed in overrun mode so that the engine can develop its power more quickly in subsequent acceleration. This process is supported by the continuously open throttle valve. When the driver takes his foot off the accelerator and then accelerates again, this allows faster build-up of the torque and noticeably improves the engine’s responsiveness.

“With this car, I can drive here on the Nurburgring and the next stop is then the baker’s shop or the DIY store. The car is really an all-rounder that can do everything,” said a visibly impressed Leuchter. That’s exactly the concept pursued by Volkswagen R which has developed models as Volkswagen’s premium performance brand since 2002.