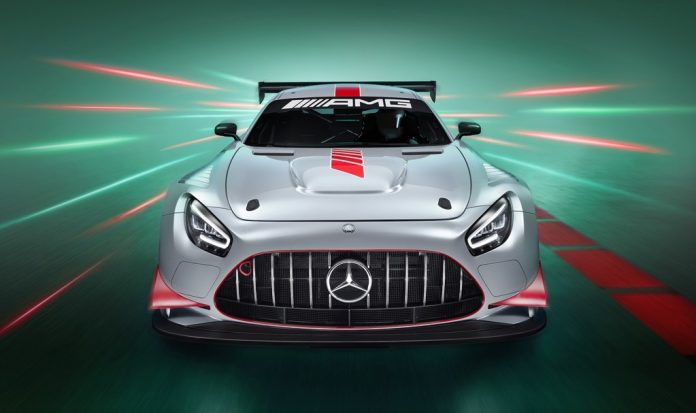 For its 55th anniversary this year, AMG has been celebrating in various ways and one more is the production of the Mercedes-AMG GT3 EDITION 55. This will be a very exclusive edition because there will be only 5 units in the world, so it will be a much-coveted collectors’ model.

To guarantee and to document the minimal production run, a specific range of numbers (“GT3.190-55”) was created for the chassis numbers of the cars. Each car will have an ex-factory price of 625,000 euros (around RM2.8 million).

While this has a GT3 designation, it is not FIA-homologated so it is not subject to the stringent regulations of the racing class. This has allowed the engineers at AMG to raise the power output of the AMG 6.3-litre V8 engine to 650 bhp, around 100 bhp more than in the homologated version that can be used for racing. Appropriately, the performance exhaust system made of Inconel comes without a silencer, generating an even more characteristic sound pattern as a result.

The Affalterbach crest has been painted on the doors, while next to the AMG logo, the 55 year anniversary logo can also be seen on the rear wing.

In the functional racing cockpit, the GT3 EDITION 55 has exclusive details such as the anniversary symbol on the seat embroidery and plaques with ‘EDITION 55 – 1 OF 5’ inscription can be found on the centre console and the carbonfibre seat.

The matte Anthracite metallic is characteristic for the AMG interior with the high-quality visible carbonfibre elements harmoniously blending in, from the door sills, door covers and centre console to the dashboard. Another exclusive feature in the interior are the seatbelts with silver accents.

As a technical highlight, the cockpit of the includes a Data Display Unit (DDU) of the latest generation. The Bosch DDU 11 has a high-resolution graphic display that shows relevant information like speed, engine speed, operating temperatures, lap times, gear and shift indication, among others. The 55 year anniversary logo makes its appearance each time the car is started.

Besides a tailor-made and specially designed car cover, each owner will also receive an exclusive watch. IWC Schaffhausen has created a limited EDITION 55 box that contains a Pilot’s Watch Chronograph Edition ‘AMG’ with each watch matched to the specific unit by the Mercedes-AMG car’s chassis number engraved on the back of the watch case made of grade 5 titanium.