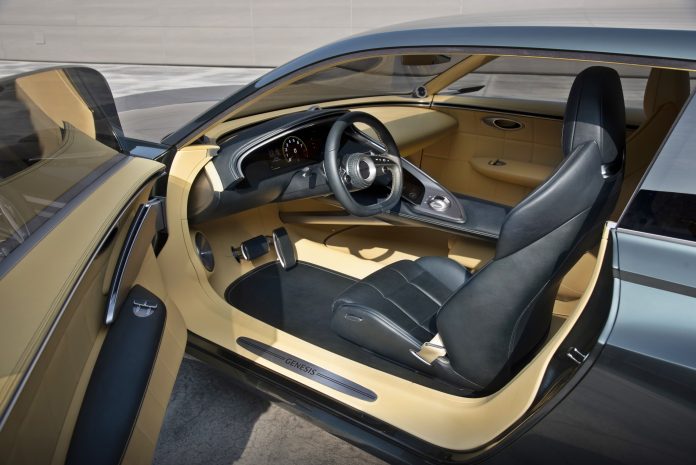 In April this year, Genesis – the third brand in the Hyundai Motor Group – unveiled the X Speedium Coupe to give a preview of what the luxury brand’s next wave of electric vehicles will be like. At that time, it showed only the exterior of the concept car inherits the brand’s design philosophy of ‘Athletic Elegance’.

Now, we get to see the inside of the X Speedium Coupe which, like the exterior, embarks on a design evolution of the Grand Tourer concept in the coming age of electrification. Over the 5 months since it was first revealed, the  interior design was developed by the Genesis design group which adopted  a ‘freestyle’ design exercise.

“The X Speedium Coupe was conceived as an internal design exercise that we later decided to reveal publicly. It was nothing more than a hard model built on our Athletic Elegance design identity,” said Genesis Chief Creative Officer, Luc Donckerwolke. “Given the positive reception it received at the event, we chose to complete the concept and present it to discerning attendees at the Pebble Beach Concours. The interior captures the Genesis brand’s ‘Beauty of White Space’ design ethos, which suits various luxury lifestyles and adds to the appeal of the dynamic GT.”

Driver-oriented layout and UI concept
The interior of the X Speedium Coupe leverages a classic Korean design principle known as ‘the Beauty of White Space’. Inspired by Korean architecture, this aligns closely with the ideology of reductive design and is expressed through a minimalist and pure form language punctuated by strong design elements.

The asymmetric, driver-oriented layout is a continuation of the theme found on Genesis’ more recent concept cars, in which all the control systems and displays surround the driver. The instrument panel and floating centre console wrap around the driver cockpit, amplifying the driving experience.

This effect is further accentuated by the interior’s contrasting colour palette, which clearly distinguishes the driver’s area from the passenger space. The driver’s seating area is set in Pinegrove Green, a complement to the Inje Green exterior.

The contrasting Monterey Gold around the driver’s seat—a colour inspired by the scenery along the Northern California coast—alludes to the yellow flowers and golden sand found in the region.

New sound architecture
In addition, Genesis is exploring the future of audio experiences through a new sound architecture. This blends technology and art while highlighting the brand’s attention to detail. In collaboration with sound mater Guk-il Yu, the head of Metal Sound Design (a company that specializes in high-performance speakers), the X Speedium Coupe features strategically-placed speakers to fill the interior with rich sound.

Driver-focused cockpit
The driver-focused cockpit has a curved OLED display that visualizes the heritage of high-performance cars. The cluster’s GUI includes a centre-mounted motor output indicator designed in a ‘newtro’ (new+retro) style – a stark contrast to the RPM gauges found in cars with combustion engines.

The vertical display on the right side of the driver’s seat features an integrated touch display with an optimized UI design. The display includes the start button as well as the multimedia and vehicle control functions.

Craftsmanship in the details
The X Speedium Coupe’s cargo area has X straps on top of the loading space, a detail inspired by the brand’s unique G-Matrix Pattern, a design feature derived from the Genesis Mint Concept.

Another noteworthy detail is the leather; the material itself as well as its application. The quilted pattern on the leather seats and the door trim gives the impression of a classic sportscar. Meanwhile, the steering wheel features cut-off leather that were salvaged from re-purposed car seat materials and woven together.

Compared to ordinary leather, the breathable grain leather used in the upper part of the cabin requires less water and lower levels of chemicals to manufacture. The threads used in the finishing process are made from repurposed plastic, adding to the material’s durability and water resistance factors.

According to Donckerwolke, the X Speedium Coupe challenges the status quo of a defined car type. “This car is an open-door moment in Genesis’ journey towards our future EV design. This is not a showcar… it’s a look into our design processes as we explore ideas for the next wave of EVs, one that incorporates Genesis’ DNA,” he said but clarified that it is also not a conventional concept car that previews plans for the production line-up.