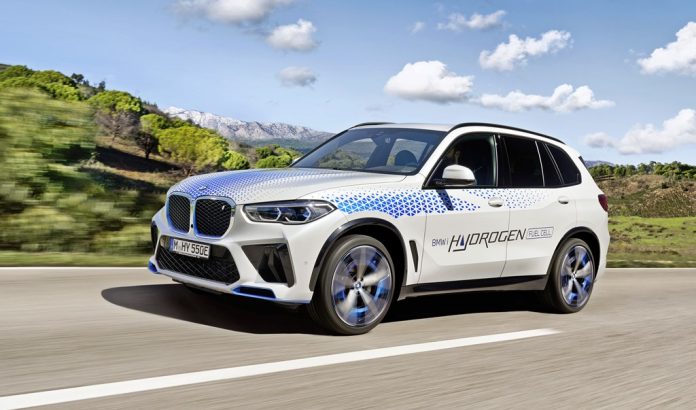 One year ago, at IAA Mobility in Munich, Germany, the BMW Group displayed a special X5 which runs on hydrogen. Known as the iX5 Hydrogen, it uses the X5 bodywork but has a hydrogen fuel-cell electric drivetrain.

The iX5 Hydrogen is under development because BMW sees hydrogen fuel-cell technology as having the potential to become a further pillar in the BMW Group’s drivetrain portfolio for local mobility without CO2 emissions. Provided the gas is produced using renewable energy and the necessary infrastructure is available, this technology can complement the BMW Group’s electrified drivetrain portfolio in future.

Fuel-cell + BMW eDrive technology
The iX5 Hydrogen combines fuel-cell technology with a fifth-generation BMW eDrive. The drive system uses hydrogen as fuel by converting it into electricity in a fuel-cell. The electric output can be up to 125 kW/170 bhp, with water vapour as the only emission.

The electric motor was developed from BMW eDrive technology also used in the BMW iX. In coasting overrun and braking phases, it serves as a generator, feeding energy into a power battery. The energy stored in this power battery can deliver a system output of 275 kW/374 bhp to provide the driving experience that the brand has been known for.

The hydrogen needed to supply the fuel cell is stored in two 700-bar tanks (the two cylinders in the picture above) made of carbonfibre reinforced plastic (CFRP), which together hold almost 6 kgs of hydrogen. “Filling up the tanks only takes three to four minutes – so there are no limits on using the BMW iX5 Hydrogen for long distances, with just a few, short stops in-between,” said Juergen Guldner, Head of BMW Group Hydrogen Fuel Cell Technology and Vehicle Projects.

Built in-house
The carmaker recently commenced fuel-cell system production at its competence centre in Munich. By the end of this year, it will have a small fleet iX5 Hydrogen SAVs that will be run around the world for test and demonstration purposes

“As a versatile energy source, hydrogen has a key role to play on the road to climate neutrality. And it will also gain substantially in importance as far as personal mobility is concerned. We think hydrogen-powered vehicles are ideally placed technologically to fit alongside battery-electric vehicles and complete the electric mobility picture,” said Oliver Zipse, Chairman of the Board of Management of BMW AG. “By commencing small-scale production of fuel cells today, we are demonstrating the technical maturity of this type of drive system and underscoring its potential for the future.”

“Our many years of research and development work have enabled us to get the very most out of hydrogen technology,” added Frank Weber, Member of the Board of Management of BMW AG, Development. “We have managed to more than double the fuel cell’s continuous output in the second-generation fuel-cell in the BMW iX5 Hydrogen, while weight and size have both decreased drastically.”

So far, the iX Hydrogen prototype has already successfully demonstrated its excellent everyday usability, even at very low temperatures, during the final round of winter testing in Sweden at the start of this year.

Technological expertise, high efficiency standards
A chemical reaction takes place in the fuel cell between hydrogen from the tanks and oxygen from the air. Maintaining a steady supply of both elements to the fuel cell’s membrane is of crucial importance for the drive system’s efficiency. In addition to the technological equivalents of features found on combustion engines, such as charge air coolers, air filters, control units and sensors, the BMW Group also developed special hydrogen components for its new fuel cell system. These include the high-speed compressor with turbine and high-voltage coolant pump.

The individual fuel cells required for manufacturing the iX5 Hydrogen are supplied by  from the Toyota Motor Corporation, which has been selling a hydrogen fuel-cell electric vehicle (the Mirai) since 2014. The two companies have been collaborating on fuel-cell drive systems since 2013.